Summer 2020 was a non-event. By now, most of us will have come to terms with that, but for many who are about to endure a long and dark winter, this year’s lack of freedom to enjoy the warmer months will make the slow march into the cold particularly difficult.

Growing up in Scotland I remember shouldering winter through planning with military precision. During the week, we’d walk to school in the dark and return in the dark. Our lunch hour allowed for access to outside, but unlike our neighbors in Scandinavia, we were rarely dressed properly to make getting a dose of sunlight a pleasant experience. From the moment we woke our day was organized around making life in the dark more bearable, mentally and physically.

Scotland’s winters are, of course, not as harsh as other northern countries, but they are a test of endurance and our daylight hours are short. This poses challenges to mental health, and many suffer from a seasonal pattern depression called seasonal affective disorder (often shortened to SAD, which is a little on the nose). This form of depression is common in countries in the northern hemisphere and can cause mood swings, low energy, and an overall lack of interest in life.

The exact cause of this seasonal depression is not completely understood, but it is believed that it is connected to reduced exposure to sunlight during the shorter days of winter. Light therapy is a very popular way to help the body and mind cope with the changing seasons, and in some cases, patients are advised to undertake talk therapy such as cognitive-behavioral therapy, or take medication. Although these seem to be the most popular ways of helping combat seasonal depression, there are other coping mechanisms we can learn from those who live through winter with the shortest daylight hours on the planet. Before we get to that, let’s look into what SAD is, who it affects, and what we can learn from Nordic countries to combat it.

Editor’s note: The author is not a medical professional. If you are experiencing depressive symptoms, please consult a doctor or mental health professional.

What is seasonal depression?

Most regard seasonal depression as a subclass of general depression, and its symptoms can vary hugely from what is often referred to as “winter blues” to an annual depression that can induce suicidal thoughts.

One of the leading theories of what causes SAD is that reduced exposure to sunlight — which affects the balance of chemicals and hormones in the brain — results in a change of mood and energy levels. Light is a stimulus for the hypothalamus, a part of the brain which controls your appetite, sleep patterns, and overall mood. The lack of light exposure reduces levels of serotonin and melatonin, upsets circadian rhythms, and messes with your biological clock. This can result in a feeling similar to jet lag.

“If someone’s biological clock is running slow and that melatonin rhythm hasn’t fallen, then their clock is telling them to keep on sleeping even though their alarm may be going off and life is demanding that they wake up,” said Professor of Psychology at the University of Vermont, Kelly Rohan to The Atlantic. And although it is still unclear exactly how tiredness directly triggers feelings of depression, a lethargic mood can produce some very negative emotional responses.

Who does seasonal depression affect?

There are several other theories as to why people experience this change of mood in winter, but most physicians and researchers seem to agree on one thing: Many people suffer from its symptoms, and it is very common. Emeritus Professor of Psychiatric Neurobiology at the Center for Chronobiology in Basel, Switzerland, Anna Wirz-Justice, shared with The Atlantic that most of us experience a low-amplitude change throughout the year with moods lowering in fall and winter and improving come spring. There also seems to be a consensus that bright light therapy — specifically undertaken first thing in the morning — can relieve symptoms.

What is light therapy treatment?

Also known as phototherapy, light therapy is a treatment in which the patient is exposed to artificial light from a lightbox. There can be variations in what kind of light source and strength is used, but most commonly it mirrors natural light. Session times also vary, depending on the power of the lightbox and how the patient handles the treatment. You can purchase a lightbox for your home, but it is advised to talk to your doctor before undertaking treatment. It is also suggested that for those suffering severely that light therapy is only successful in addition to other therapies and/or medication.

How do people treat seasonal depression in Nordic countries?

Since 2013, the World Happiness Report has seen an annual high ranking of Finland, Denmark, Norway, Sweden, and Iceland in the top 10. Nordic countries have occupied the top three leading spots in 2017, 2018, and 2019. That begs the question: Why is it that we continually see these countries topping the list when they have some of the most grueling winters with the shortest days in the world? And if indeed SAD is directly linked to a drop in sun exposure, how is it possible that the most sun-deprived people have the highest overall level of happiness on the planet? As well as utilizing light therapy there are some techniques that have been built into the culture of the part of the world that seems to dramatically help their citizens mentally cope with the change of season. Here are some of the ways Nordic countries combat seasonal affective disorder.

Having a diet of oil-rich fish

The dietary staple of oily fish in Nordic countries could be pertinent to helping support mood regulation. Research into mood disorders suggests that consuming a balance of omega-3s to omega-6 fatty acids is beneficial for fighting depression. Oil-rich fish such as salmon, smoked herring, mackerel, and sardines are commonplace on the Nordic table and, as well as providing a good source of omegas, fish oil also gives you a dose of the “sunshine vitamin,” vitamin D. Vitamin D is concentrated in the liver of a fish, so taking a cod liver oil supplement is the best way to get your daily dose.

Getting as comfortable and cozy as possible 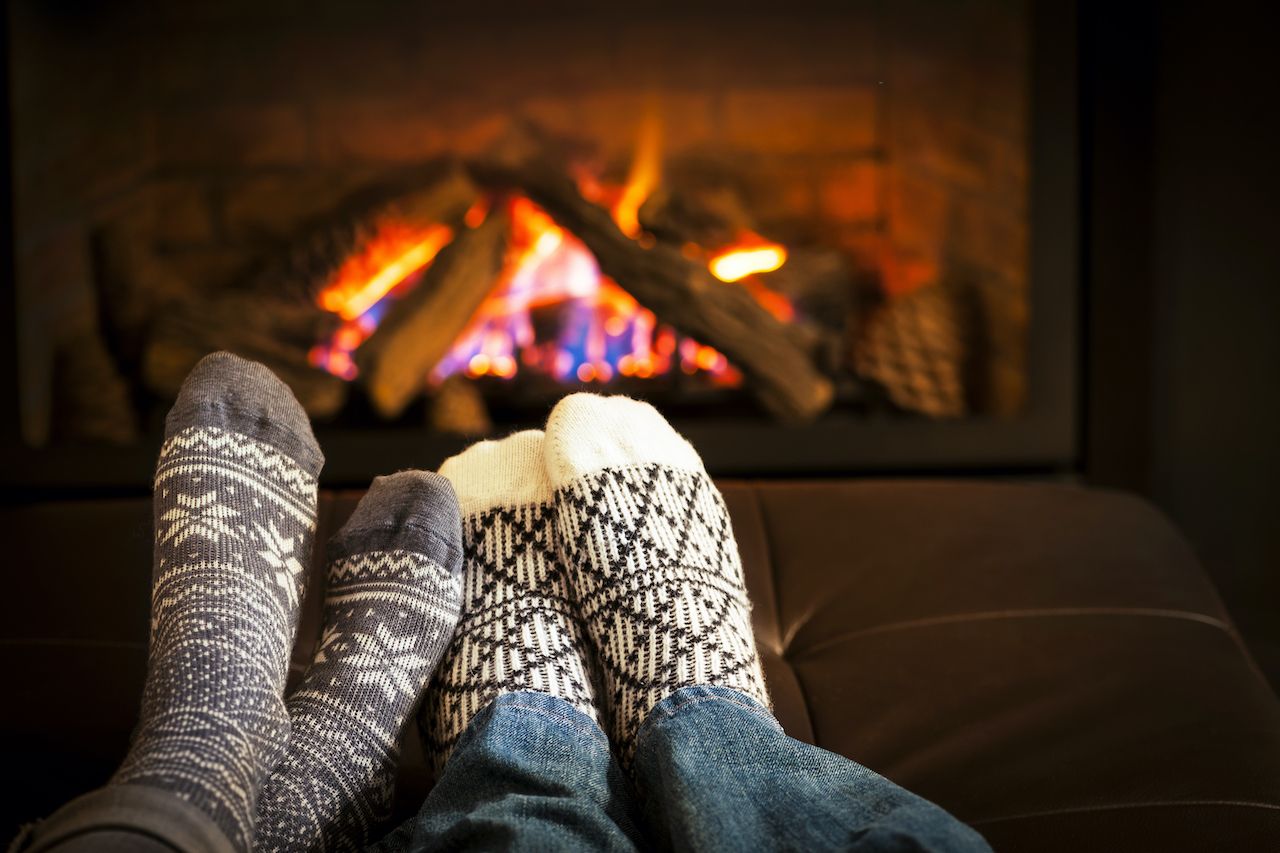 There has been a lot of conversation about the benefits to well-being by adopting the cozy Danish lifestyle of hygge over recent years. Hygge is such an important part of Danish culture that Meik Wiking, the CEO of the Happiness Research Institute in Copenhagen, proclaimed in his book, the lifestyle is “a defining feature of our cultural identity and an integral part of the national DNA.” Norwegians refer to their version of this lovely sounding lifestyle as koselig — but it’s a very similar way of thinking. Basically, these nations gravitate towards anything that is comfortable and cozy.

During winter months they surround themselves with warm knits, light candles and fireplaces, and enjoy the comfort of a warm bowl of soup. They find pleasure in small things and snuggle down for the season, and with that comes peace of mind. It has been argued that it is partly because of Norway’s gravitation toward creature comforts that the nation enjoys a high level of year-round happiness. For example, recent research by health psychologist Kari Leibowitz looked at the psychological effects of life during the Polar Night — a time of the year where the sun does not rise above the horizon — in one of Norway’s darkest places, Tromsø. Her yearlong study indicated that by opting for simple pleasures, winter months were more bearable, and thus the rates of winter depression are much lower than what would be expected for the islands northern latitude and long winter.

Psychological acceptance and going outside

But don’t let these concepts of cozy living let you think people from Nordic countries during winter are at all lazy; in fact, the overriding themes of resilience and acceptance are prevalent in their cold-weather culture, activities, and attitude. Outdoor life in the north does not grind to a halt with shorter days, and research conducted in communities close to or above the Arctic Circle has concluded that this positive mindset and their acceptance of the environment results in physiological health and balance.

A huge part of Leibowitz’s research findings indicates this to be true, and after being surrounded by Norweigan positivity during the winter months of her study, she stated that her mindset began to change towards the season. “Most people don’t realise that their beliefs about winter are subjective,” shared Leibowitz. “They feel like they’re just someone who hates the winter and there’s nothing they can do about it … But once you put it in people’s heads that mindsets exist, and that you have control over your mindset — I think that that’s tremendously powerful.” So it seems that having a positive mindset, accepting that winter is coming, and indeed celebrating it plays a huge part in supporting your mental health during the season.

WellnessA Therapist’s Guide To Boosting Your Mental Health When You’re Socially Isolated
Tagged
Wellness
What did you think of this story?
Meh
Good
Awesome