In Fargo, right next to the wood chipper, sits the Best for Last Club.

It’s an exclusive cadre of visitors who made North Dakota the 50th state they’d visited, a list of 2,500-plus names at the Fargo-Moorhead Visitors Center reflecting people who stopped in to check off a state they’d found no reason to visit ahead of the other 49.

Admittedly, finding a reason to visit North Dakota can be challenging (it was #47 for me). But seven to nine times a year, North Dakota State University has as good a reason to visit as anywhere in our football-loving nation. Even if you care nothing about football. Because tailgating a football game in Fargo is an education in what this windswept, snow-covered state is all about, and one of the best ways to experience a state you probably know nothing about. 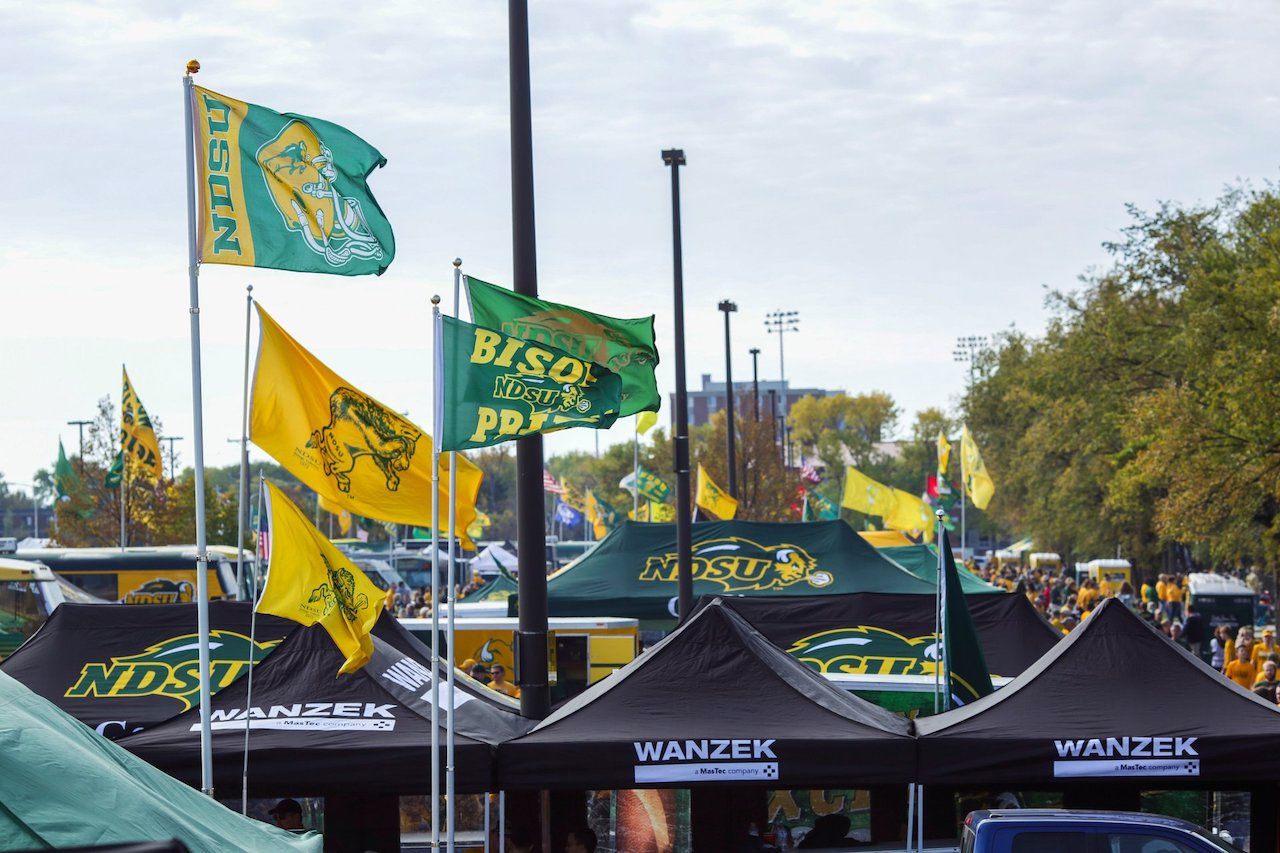 A quick primer: The North Dakota State Bison are the most dominant team in the Football Championship Subdivision – basically the division below the big division where teams like Alabama and Notre Dame play. They’ve won seven national championships this decade, and on the rare occasion a team from the top division has dared to play them (Iowa, Minnesota, Kansas State), NDSU’s beaten them too. The Bison have gotten so good that upper-division teams won’t schedule them anymore.

As winning college football teams do, they’ve also developed a massive pregame tailgate scene. It’s a mainstay on “Best College Football Tailgate” lists and regularly draws 30,000 to 50,000 people to the tiny lots outside the Fargodome. So while you won’t often see their games on ESPN, North Dakota State has one of the most passionate fan bases in the game.

Five hours before an early November kickoff I found myself immersed in that fan base, wandering a city of green and gold tents in the snow-covered parking lot. The tents sat outside an armada of vans and buses painted with various scenes of NDSU football. 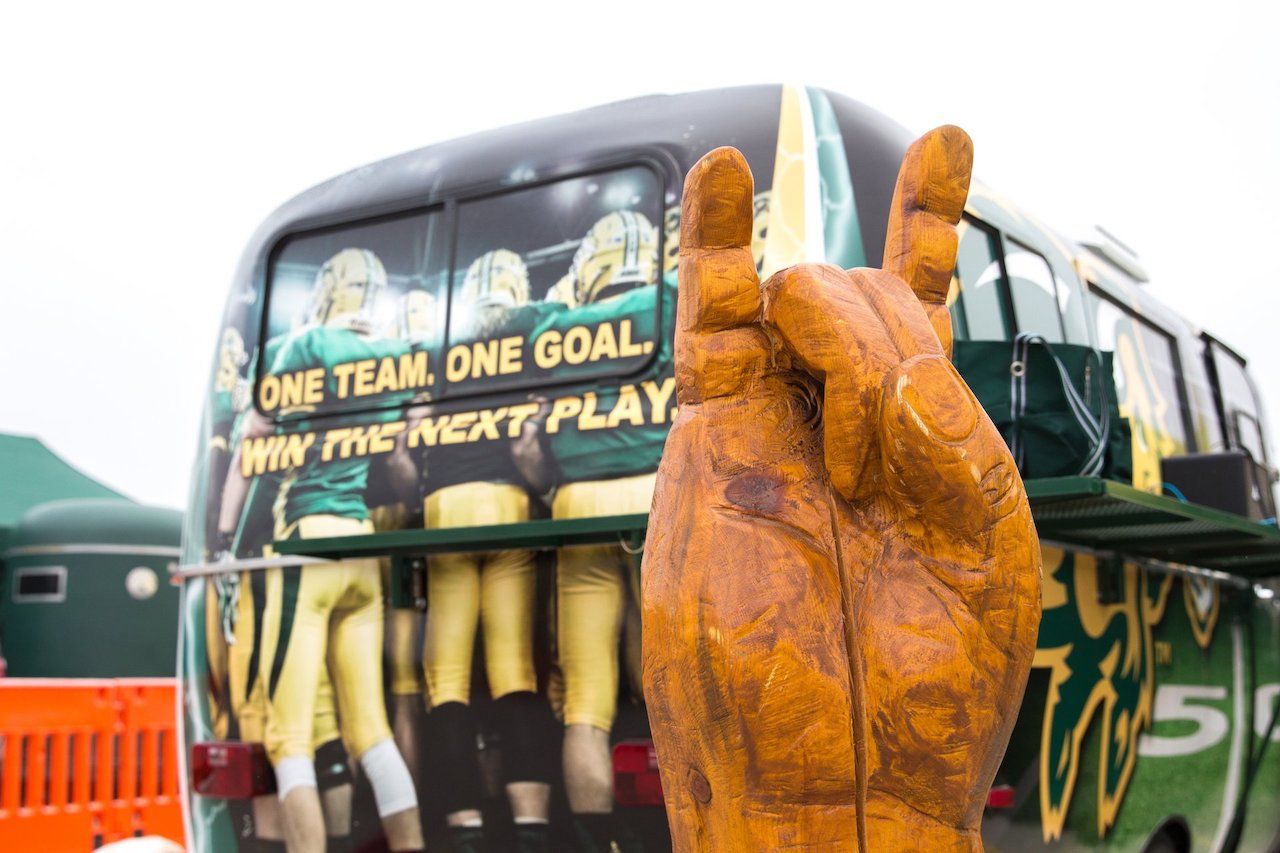 One bus bore a mural of ESPN College Gameday on one of the two occasions it has visited Fargo. Another boasted a 15-foot rendering of Carson Wentz. There were a number of scenes of bison stampeding on a prairie and no shortage of buses listing off NDSU’s seven National Championships.

“This looks like NASCAR,” I said to the tourism department rep who’d drawn the unfortunate duty of escorting me through the party. She said it was her second game. Before I could ask her how far people drove, a bald-headed man in an NDSU National Championship bomber jacket came running up to us.

“These guys are crazy over here; you gotta come see this,” he said as he dragged us in out of the cold. He led me inside a green tent, packed with snow on the side for insulation. Within 30 seconds, I had a shot ski in my mouth. I’d been at the Fargodome not five minutes — knowing nobody — and already had a total stranger invite me in out of the cold to pour me shots.

This was Midwestern hospitality at its finest.

After I finished my shot of Fireball, he handed me a bright orange Busch Light can.

“Special for deer season,” he said. The guy’s name was Mark Soule, and he’d been tailgating at the Fargodome for nearly 15 years.

“It’s opening week of deer season, and it’s a late harvest,” Soule mused, looking out over what, to me, looked like a packed tent with about a hundred people crammed in. “Lotta people sitting this game out.”

“Oh hell no!” he said, almost offended. “You oughta see for playoff games in December, you can barely move in here… But the team we’re playing this week is shit, so a lotta people would rather be deer hunting.”

Other fans regaled me with tales of early-season tailgates when new students roamed the lots decked out like it was the University of Florida, funneling beers and playing beer pong.

“You can’t walk through the lots in August,” Joey Hughes, a batboy for the Fargo Redhawks told me. “Like there’s literally no space for people.”

“I don’t know most of these people in here,” Soule said, motioning to the 50 or so people who’d assembled inside his green walls to drink away from the sub-freezing wind outside. “But we’re family here, a 15 to 30,000 person family who loves good drinks and great food.”

He motioned me towards a table with some cooked meats and a crockpot full of a dumpling-cream soup I didn’t recognize.

“Knoephla!” he responded like he’d invented it himself. “You don’t get much more North Dakota than knoephla.”

I took down a couple of bowls of this steaming, potato-and-dumpling creamy carb bomb, and it tasted like Midwestern winter on a spoon.

Moonshine culture and native hospitality wherever you go 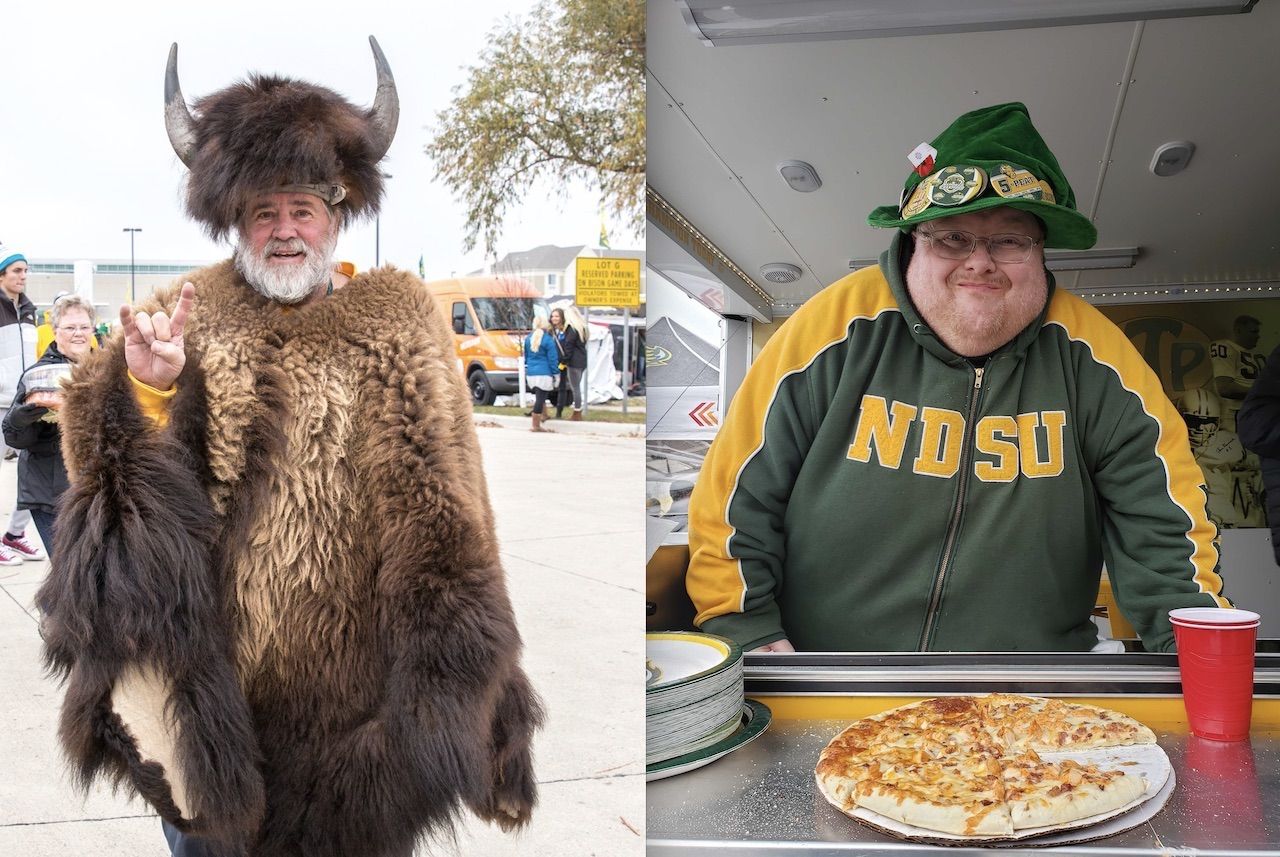 We moved to another tent where a home-distiller named Dave in a POW-MIA cap offered me a tasting of his homemade bubblegum moonshine.

“Moonshine’s as much a part of North Dakota as it is West Virginia,” he said proudly as he poured me samples of his traditional gasoline-flavored moonshine.

“What proof is this?” I asked him as I sipped, like the answer would affect how much I drank.

The dancers — set in front of a bus-side fresco of bison running through a thunderstorm on the Fort Berthold Indian Reservation — were part of a tailgate hosted by the MHA Nation, an alliance of the Mandan, Hidatsa, and Arikara tribes. Before making it through the masses of Cupid Shufflers, someone handed me a beer.

This dark-haired man was apparently the leader of the tailgate. He declined to tell me his name, so we’ll just call him Lee. He took me to a buffet of traditional tribal food, which included buffalo.

“We’re a culture of cooking and inviting people in,” he said as he poured me a vodka and something. “That’s not just a tribal thing. It’s a Scandinavian thing; it’s a North Dakota thing.”

Lee led me up the stairs into his converted Greyhound, once used to move Mexican migrant workers working on the railroad. Now it’s a shrine to Bison football, with pictures from championship games and epic tailgates lining the walls. It has a full kitchen and bunks in the back for marathon drives to Frisco, Texas, for the FCS championship game.

“It’s been on gameday twice!” he boasted proudly.

I visited a few more tailgates and couldn’t look up without having a beer put in my face. Tailgates from farm equipment makers. Tailgates from alumni. Tailgates from native tribes. The tailgate was, in effect, visiting all the people of North Dakota at once, without leaving a parking lot.

I found the average attendee’s drive had been about three hours. Many came from towns with fewer than 100 people. But Bison football was how the entire state came together, a sort of beer-soaked convocation of one of America’s most sparsely populated states.

Even in a blowout, Bison football is all that matters 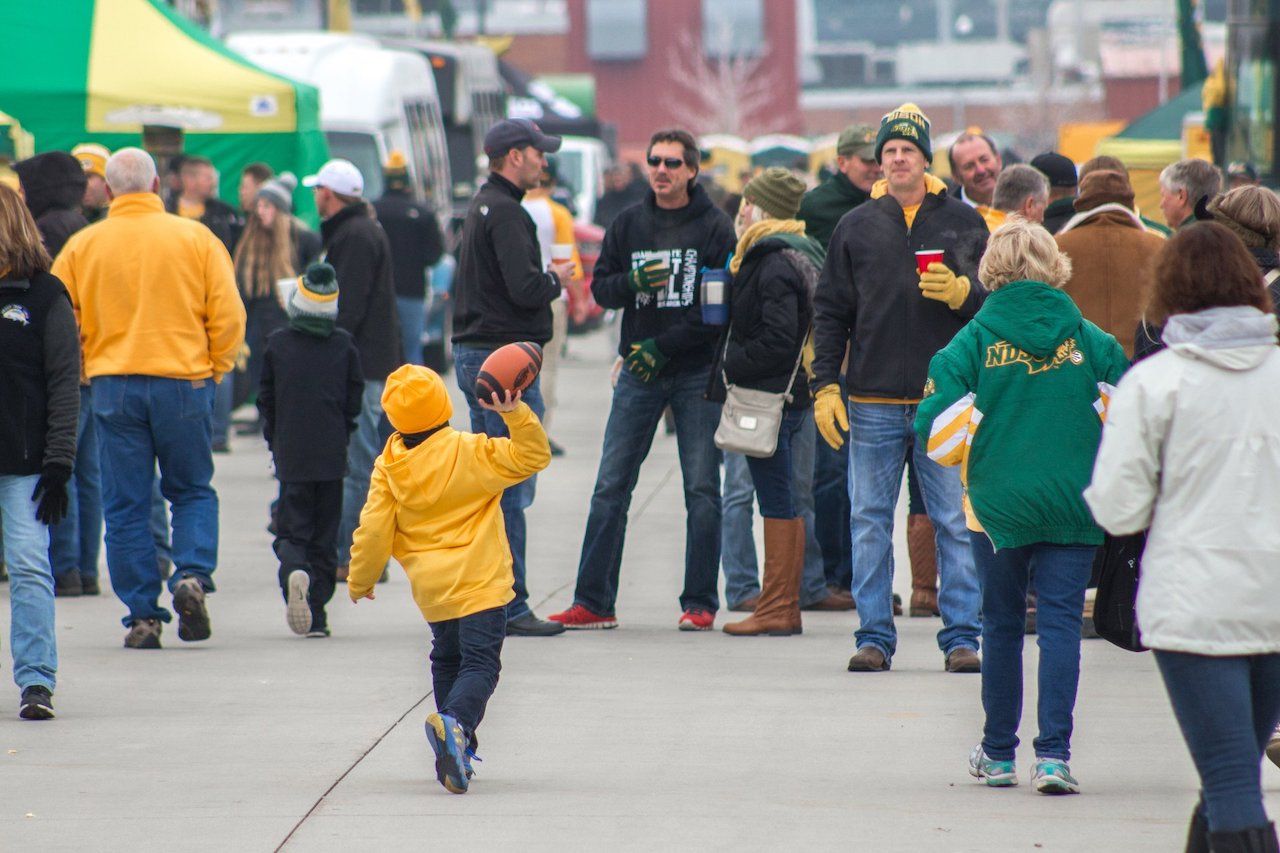 Inside the Fargodome, fans settled in for what they rightfully assumed would be a slaughtering of the visiting Western Illinois Leathernecks. The Bison hadn’t lost a game in Fargo since 2016, and the Leathernecks had won one game all season.

But the atmosphere was still intense, the 19,000-seat Fargodome feeling more like a basketball fieldhouse than a football stadium. With seats running nearly vertically from the field to the top row, fans feel on top of the game, and the energy translates to the players. It’s not the imposing behemoth stadiums you’ll find in Ann Arbor or State College. But it’s an immersive, powerful experience nonetheless.

The game, however, seemed decided by the end of the first half, with the Bison up 27-0.

“It’s the first weekend of deer season,” the fan sitting next to me said echoing apologies I’d heard all day. “And this team’s shit.”

Sorry the other team wasn’t better; wish you coulda seen a better game.

The good-natured apologies and open invitations seemed appropriate in the ever-polite Midwestern plains. 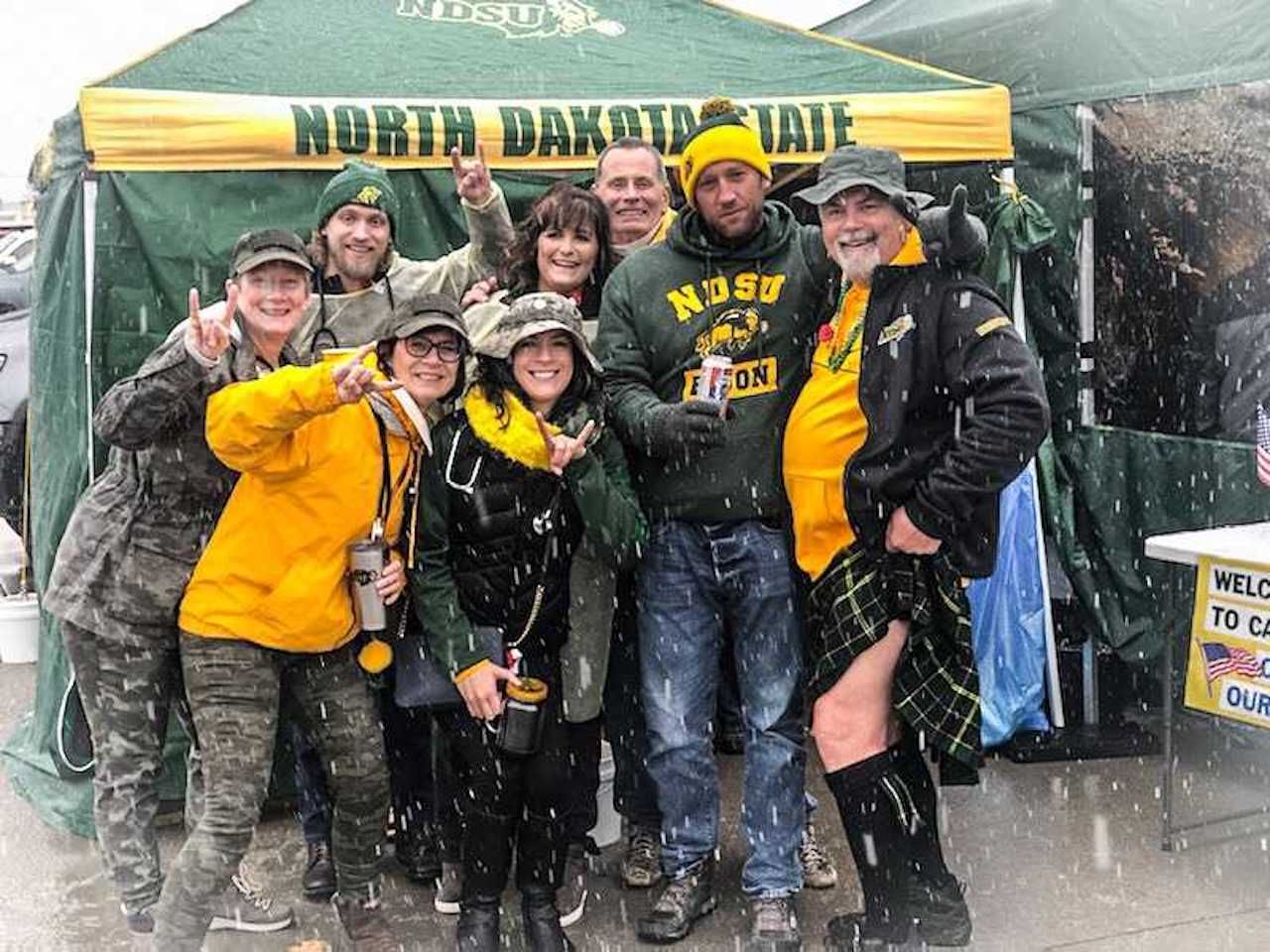 I opted to watch the second half at Herd and Horns — a Bison-themed sports bar across the street from campus. The Bison’s blowout was playing with full sound on all but one screen, which was showing the weekend’s huge showdown between Alabama and LSU.

Nobody seemed to be watching it. In North Dakota, the Bison are life, and the nationally televised battle in Tuscaloosa might as well have been little league softball.

“This is what we’re good at,” a fan sitting next to me explained when I asked why nobody was watching the so-called game of the week. “Football. Tailgating. It’s all we’ve got. And when folks come here, like you, we wanna show them we do it better than anybody.”

At first glance, he might sound like he’s selling his state short. But that’s not it at all. NDSU sees its tailgates as a way to show people who never even think about North Dakota what their state has to offer — its traditions, its foods, its people. And though it may not be a traditional lure, it’s still a way to get people to visit a place they otherwise might not. Or, at the very least, visit it 46th.

Art + ArchitectureThe 17 Most Beautiful College Campuses in the US
Tagged
Entertainment Events North Dakota, United States
What did you think of this story?
Meh
Good
Awesome

The 10 Biggest Lies the Guidebooks Tell You About North Dakota