Waiting at a border crossing in 95°F temperatures is excruciating, especially on a motorcycle. The Turkish-Greek border was not the easiest crossing I’ve ever passed, and it’s especially challenging since it’s also the border into and out of the European Union. But it’s all part of the journey. This was day one of a 31-day trip through northern Greece my wife, Kathleen, and I took after completing 47 days on two wheels on our BMW 310GS from Antalya, Türkiye, to get to here. We left unbearable temperatures on July 4 and were hoping for cooler temps as we went further north.

We arrived at the Kipoi border station to find a line of cars that looked manageable, but it seemed like the immigration officers were checking everything they could. Even after passing our first of three checkpoints at the end of almost two hours, we still had to go back and supply more information. But it was nice being back in Greece and being back in Europe.

It took just a few minutes for Kathleen and I to notice, but we both commented that there was a difference in the quality of the roads between the two countries, and a palatable change of energy that could not be explained.

My wife and I have been homeless, both by definition and by intent, since leaving the United States in February 2019. We’ve been permanent nomads ever since, traveling to 26 countries during that almost four year period, and both of us have a preference for Europe proper, as well as the Balkans. My ancestry is Hungarian and Romanian, so I guess those roots run deep, and being a travel writer since we left has allowed us to share our stories and inspire others, especially the older generation, since we are ages 68 and 69. 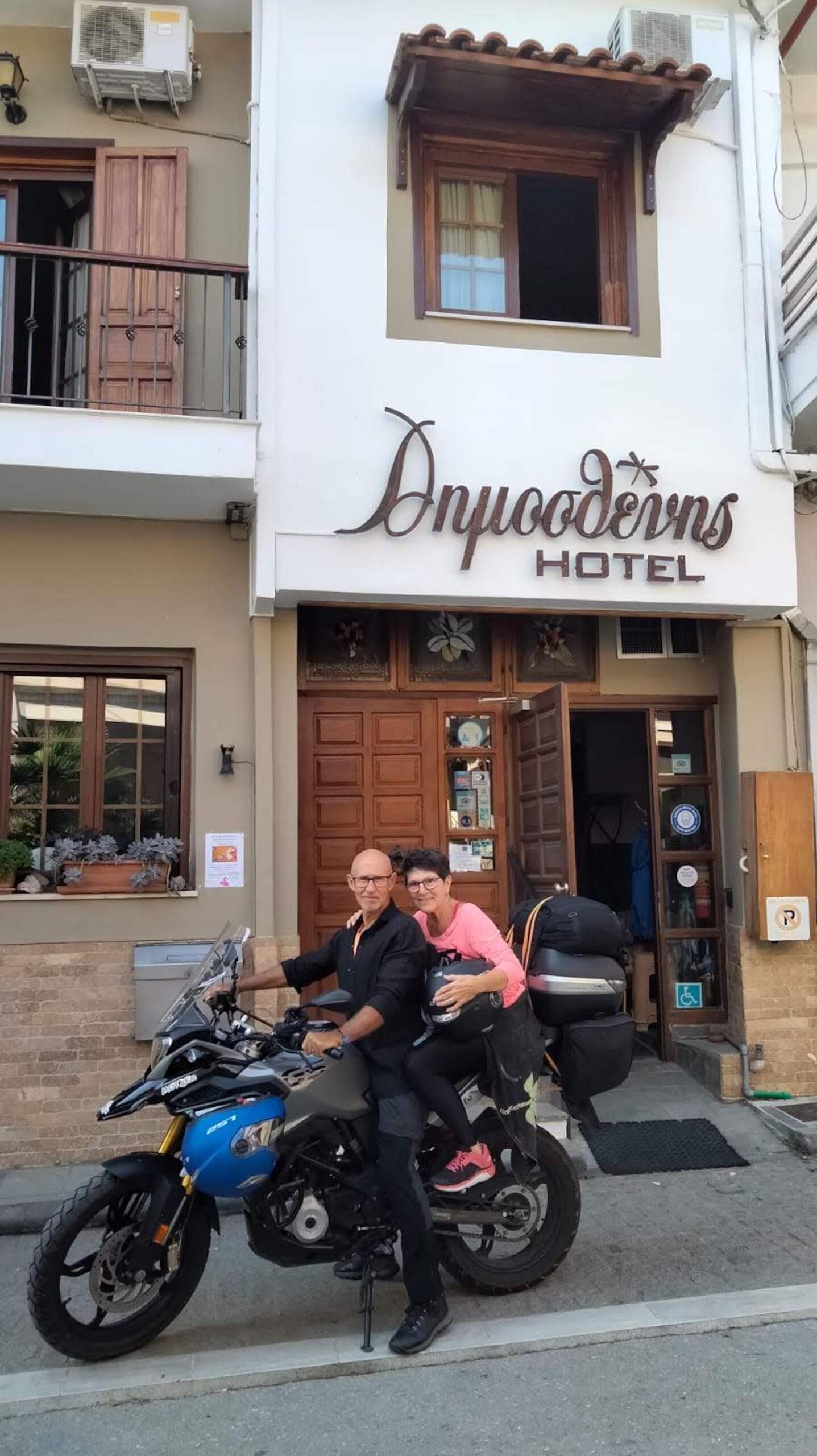 This was our second time in Greece. Our previous visit took us to Athens and the islands of Santorini and Naxos. Northern Greece, which is rich in history, often doesn’t get the love it deserves from travelers, and we were out to fix that. The itinerary was set up with Sofia Bournatzi, who has been in the travel industry for decades, and she arranged 15 hotel rooms in 15 regions over 31 days. During that time, we would drive over 1,500 miles and visit 17 different ruins and museums.

We would also be changed forever, as we were able to experience the history of not just Greece, but of the world of civilizations, since so much of it started where we would be traveling. Much of our journey was on highway A1, also known as the Via Egnatia. It was the first interstate and international highway, built by the Romans 2000 years ago. It originally started in what is now Albania and terminated in Istanbul (then Byzantium, later Constantinople), but now stays within the Greek border for 420 miles, and covers 1,650 bridges, and 76 tunnels — many of which we rode through. 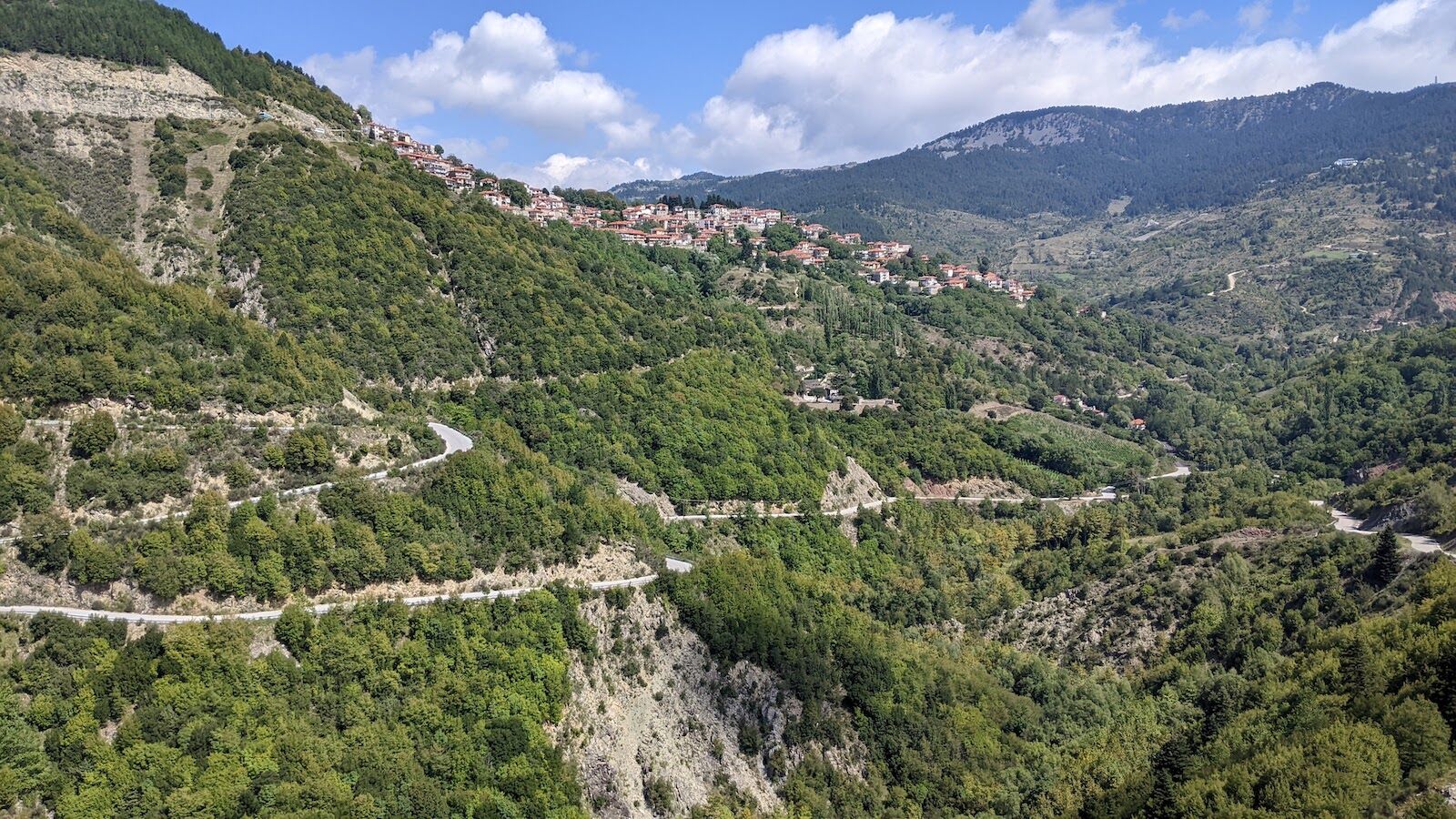 After crossing the border it was time for a meal break, and the first stop was a city not on the itinerary, but one with a historical footnote. Alexandroupoli is a beautiful coastal town on the Thracian Sea, which was a term I had never heard before. I considered the Mediterranean and the Aegean as large bodies of water that included every piece of land it touched, but there are many isolated sections, like the Thracian Sea, that are specific to different parts of the coast. Alexandroupoli is the largest city in the region and a major shipping and commercial port, along with being the very first city where Alexander III, ie, Alexander the Great, won his first battle at age 16. This was the first of dozens of cities he founded and named after himself. 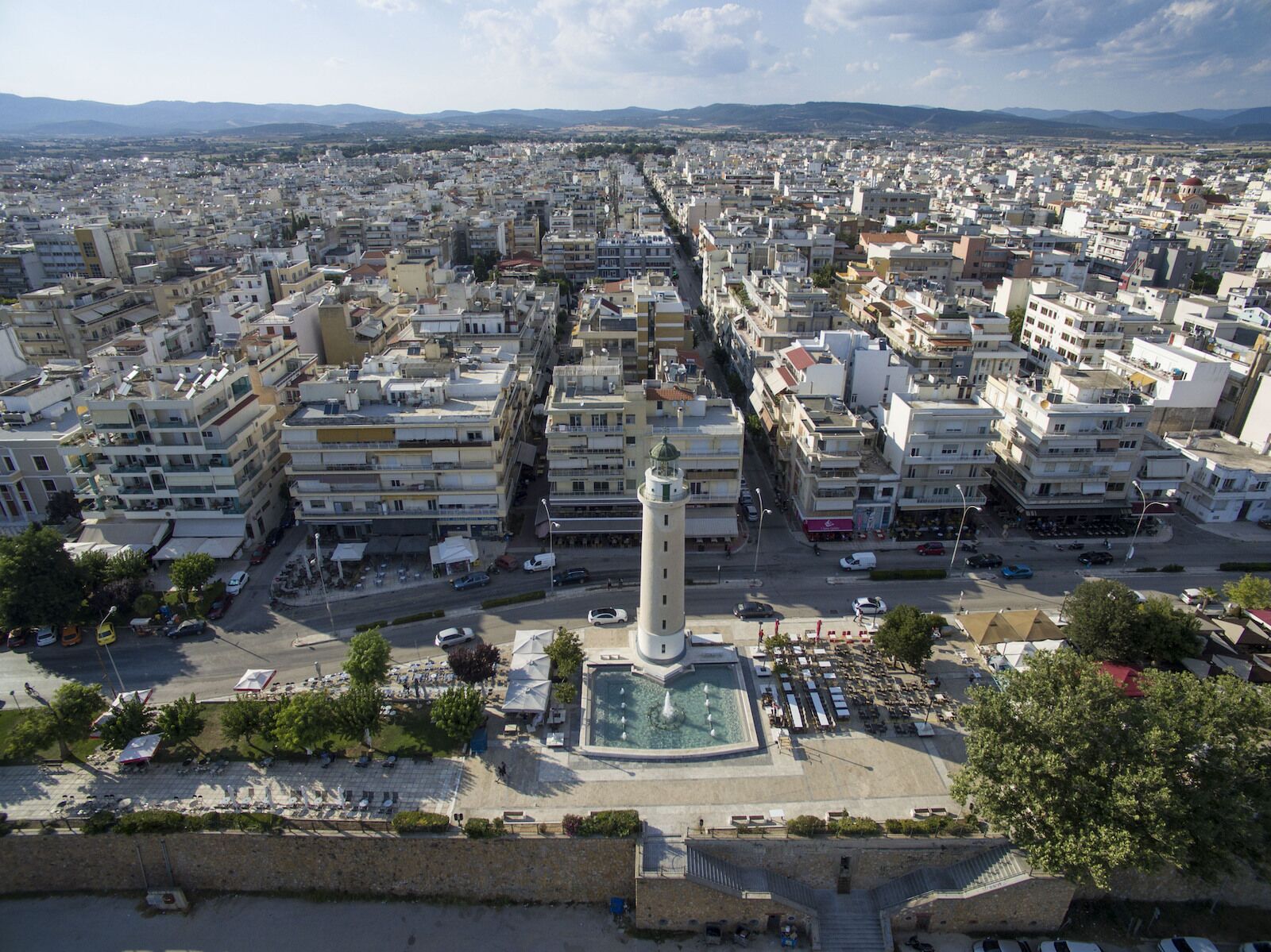 One of the fascinating aspects of northern Greece is the overwhelming presence of specific historical characters with impact in that area, including Alexander, his father, King Phillip II, the great philosopher Aristotle, and the Apostles Paul and John.

After having our first of many Greek salads in Alexandroupoli, we headed onward to the city of Kavala to the west. Even though our tour did not officially “begin” for two more days, we were threatened by something no motorcycle riders like: rain. The forecast showed that the next eight days predicted rain, but, to cut to the chase and give away the ending, we encountered 20 minutes of it while riding over the next 30 plus days. 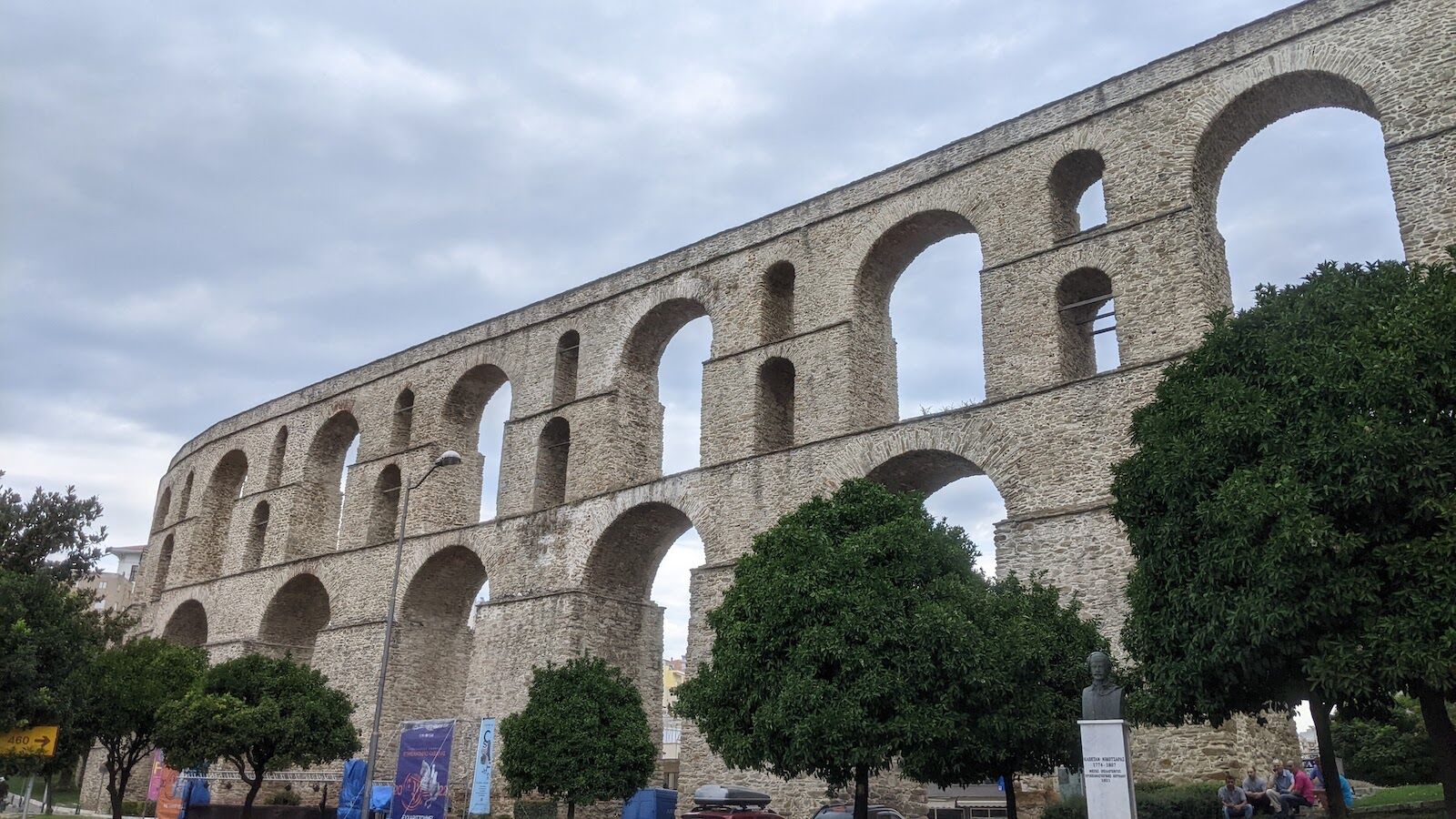 The city of Kavala wowed us as we rode into town and under the most well preserved aqueduct I have ever seen. The Kamares is a well-known landmark, and along with the Fortress of Kavala overlooking the harbor, is a great incentive to visit. We stayed for just two days at the beautiful Lucy Hotel, and had a full view of the coastline and the water. This was the first Greek town we noted as a place to return to for much longer, but it was not the last. As nomads, we ideally seek out cities to live in for six weeks at a time, and by the end of our month in northern Greece, we had a decent list to choose from.

From the oceans to the mountains we rode, to the ski resort city of Volakas that’s quiet in the summer season. Along the way, we visited Aggitis, the first cave I had ever been in. It’s a river cave with a waterway running throughout the several-hundred-meters depth we toured. Two days later we stopped into a second cave, Alistrati, and though it was a more typical dry cave, it was even more impressive with the many hundreds of stalactites and stalagmites within. 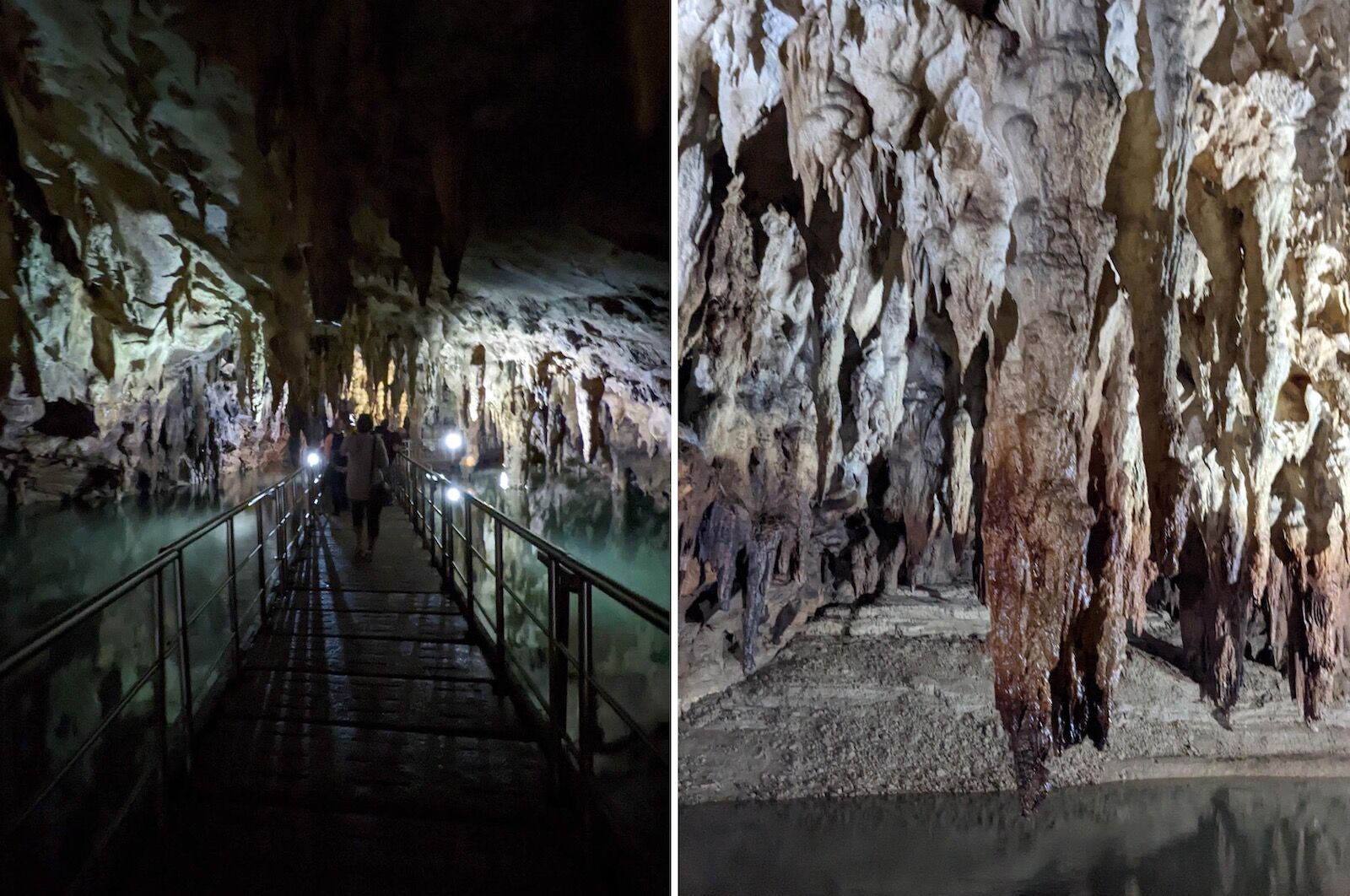 Water was a big part of our trip to the north country, and the (next) city of Drama exemplified that since it was founded atop what is called the Agia Varvara — a riparian stream bed that’s always in motion, which created a series of lakes within the city. Our stay at the Hydrama Hotel was immediately across the street from it and was totally renovated a decade ago from a tobacco processing plant. Over the next week we visited the cities of Serres, one of the oldest and most historic cities in Greece, followed by Lake Kerkini, a protected reservoir that holds the largest and most diverse population of birds in Greece.

The city of Edessa is called the City of Waterfalls, and is home to a huge one called Karanos. The travertine in the water makes the ground grow rather than the pounding waterfall eroding the land it hits. The 20 minutes of rain caught us as we entered the city, but we voluntarily got soaked by exploring the underside of Karanos regardless. 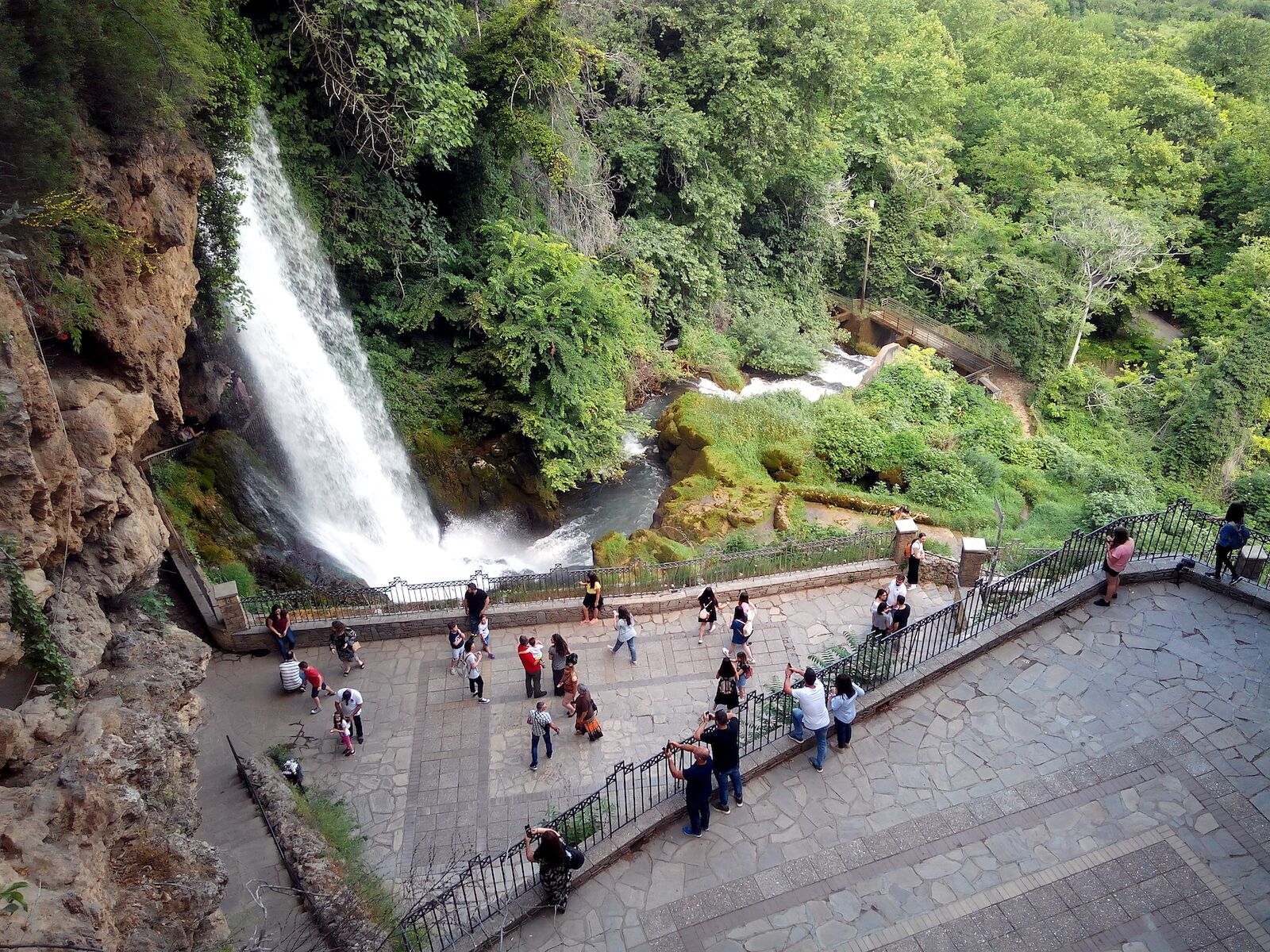 Aside from water, the two aspects of northern Greece that really hit home were based in history. Not just ancient history, but also from a century ago: World War I. I had little knowledge of the “War to End all Wars,” but Greece had a huge impact on the war. The cities of Goumenissa, Veria, and Skra were all significant battle sites. As was the “Cultural Capital” city of Thessaloniki, and Ioannina, the silver hub of Greece for centuries, and the farthest west we went towards the Aegean Sea.

But it was the ancient history that captivated me as we visited the town of Pella, where Alexander the Great was born, as well as Stagira, birthplace of Aristotle. To actually ride into Mount Olympus was almost surreal, and I imagined the mythology that sprung from that mountain. A series of six monasteries built on top of quarter-mile-high spire in the Meteora area, in the city of Kalabaka, went to the very top of both mine and Kathleen’s list of most impressive places we’ve seen. Our lodge, the Katraki Hotel, was one of the most charming during our journey. 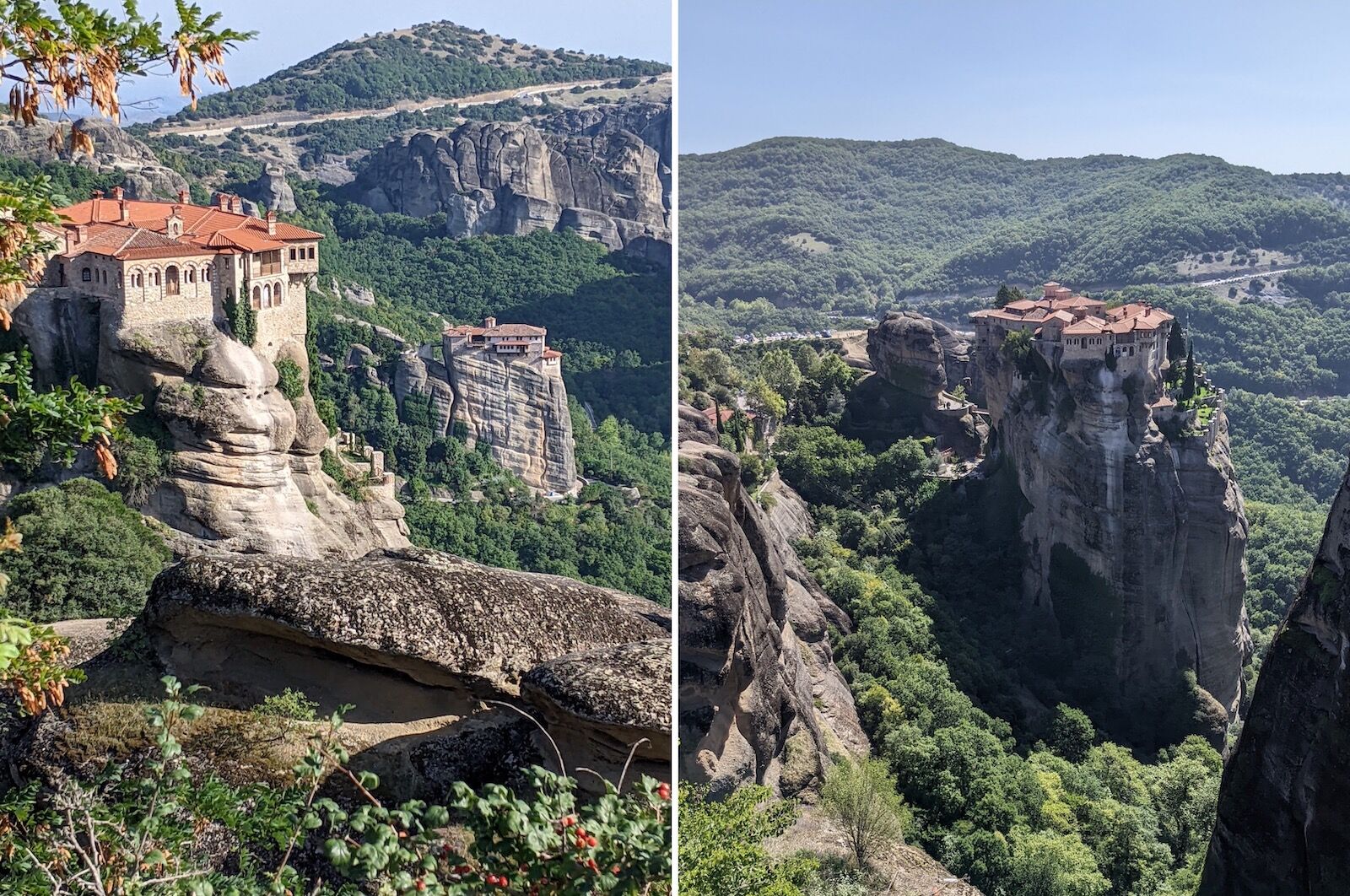 The trip into northern Greece was officially called the “Urban Centers of Northern Greece Campaign,” and the intent was to highlight the part of the country that is not based on tourism, but deserves to be visited. This is the real Greece, where people in cars stop in the street to talk with their friends walking along the side and no one gets upset.

This is where everyone eats “Greek Family Style,” which means lots of food dishes shared by all. This is where wine is grown, and where buffalo roam — both available for our enjoyment. This is a place to go, to see the real Greece.