Home to Honolulu and legendary surf beaches, Oahu is where most of Hawaii’s diverse population lives. There is no denying that Oahu has many epic beaches, but not all of the well-known options are actually suitable for families. Although loved by surfers, the gnarly waves featured at some of the beaches are a parent’s worst nightmare.

Don’t let this put you off, though. While the big wave beaches get a lot of media attention, Oahu has plenty of wonderful beaches where you and the kiddos can swim without stressing about massive swells and dangerous conditions. From the well-known through to little-known local favorites, here are some of the best Oahu beaches for families. 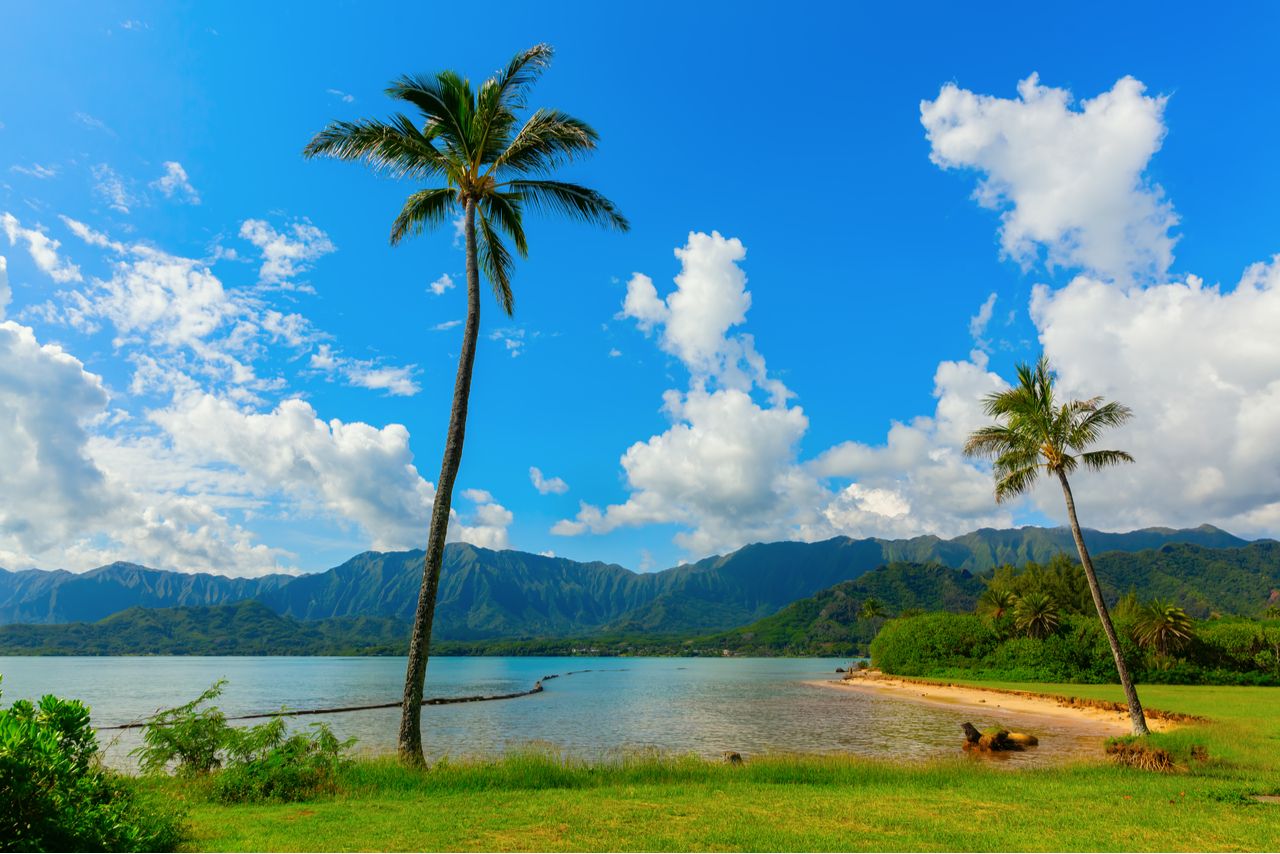 Kualoa Beach really turns on the charm when the conditions are right. The park features a green lawn that grows right up to the sand and a free parking lot with walking access to the beach. Although the stretch of sand here is a little on the thin side, the scenery makes up for it. Casting your eyes oceanside, you will see a small island known as Chinaman’s Hat, which you can actually visit by kayak if you’re up for it. Views of the Ko’olau Mountain range from here remind you that Oahu’s interior is just as dramatic as the coastline. 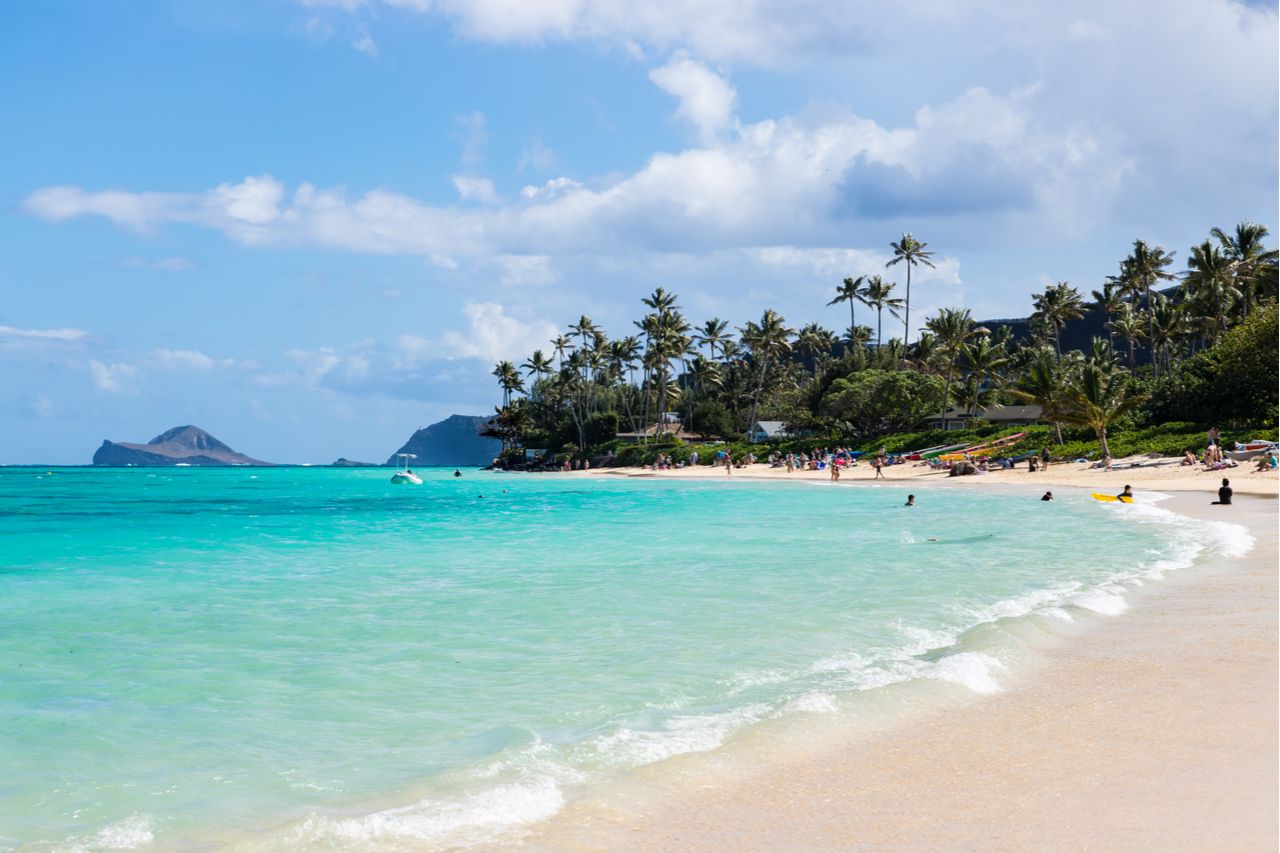 Often touted as the most beautiful beach in Oahu, Lanikai beach feels very much like a local’s beach. There are no facilities, but visitors will enjoy around half a mile of clean white sand and turquoise water that will instantly level up their Instagram feed. The beach has no lifeguards, but luckily there are no waves at all — so while you should always watch your kids, you don’t need to panic.

Located in a residential area, Lanikai Beach is not set up for tourists and is reached by parking on the street and walking via one of the public beach access paths. This is the kind of beach where you pack your lunch and drinks in a cooler bag, grab some sand toys, and throw in a ball to flop here for at least half the day. 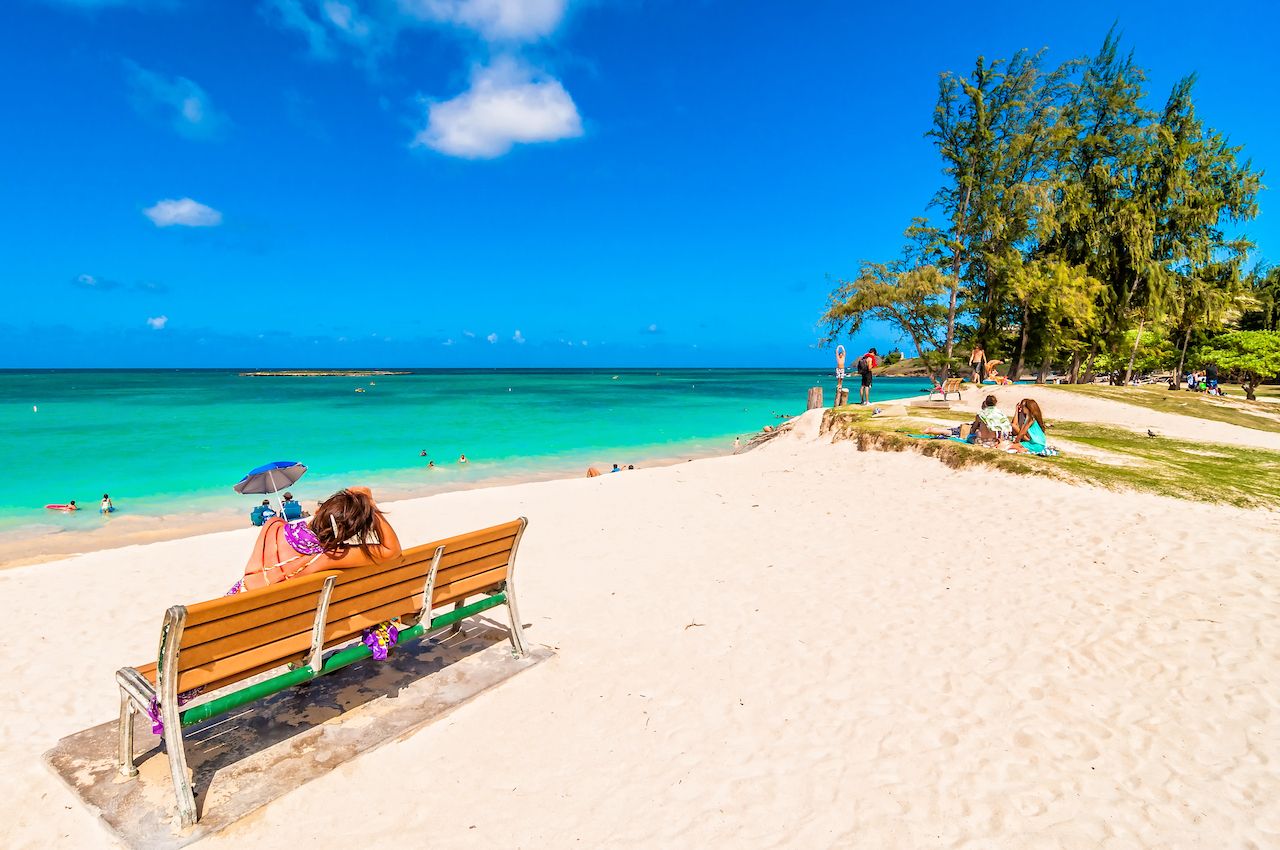 Nearly as beautiful and not too far away from Lanikai Beach, Kailua Beach has the same natural beauty. The benefit of choosing Kailua Beach though is that it has much better parking options and offers restroom facilities and showers. Kailua is excellent for just beaching around, and because it’s such a large stretch of sand, there is plenty of room to spread out. Its water is calm enough to just splash around in, but some spots have just enough waves to break out the boogie board. 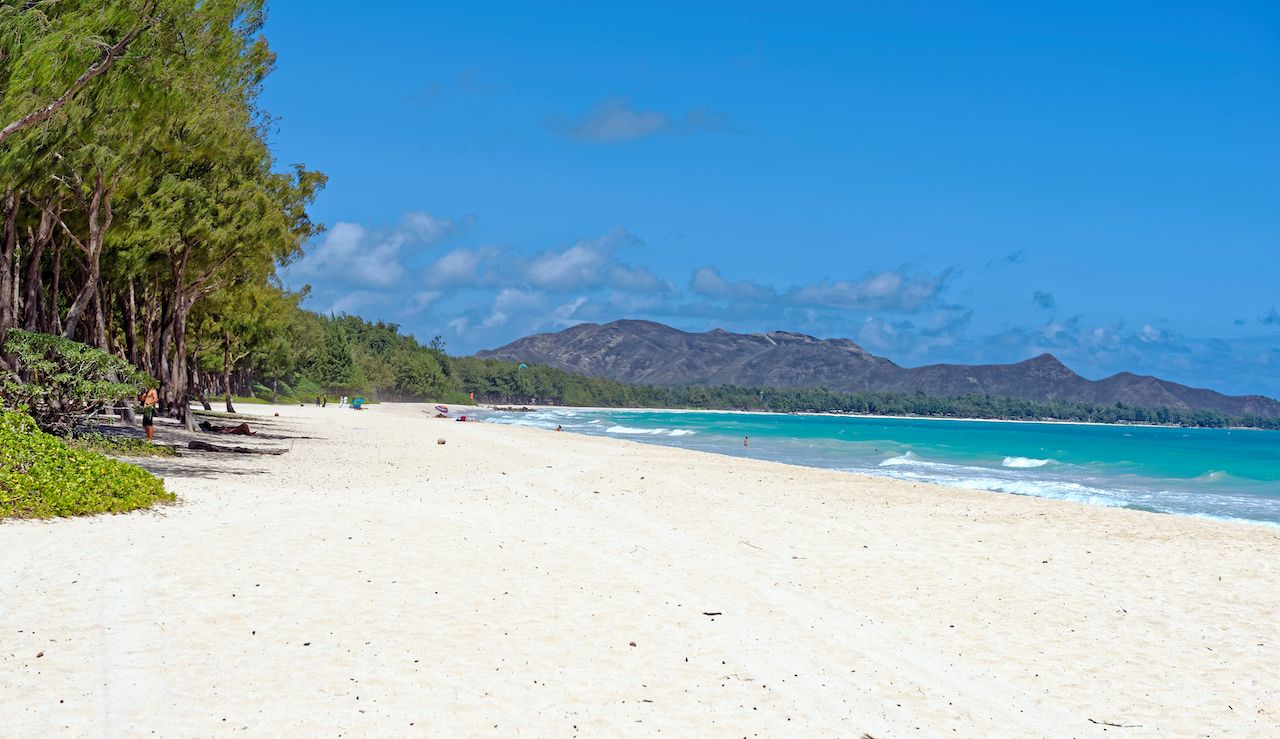 Here on Oahu’s eastern stretch, you will find the enormous 75-acre Waimanalo Bay Beach Park and Recreation Area, which features a lengthy and lovely stretch of sandy beach. There are few people here, making it one of the best Oahu beaches for families. But what really stands out is the stunning turquoise-hued water that we’ve come to know and love about Oahu’s beaches. When the conditions are ideal (they often are), it’s the perfect off-the-tourist-map place for families to swim and snorkel. 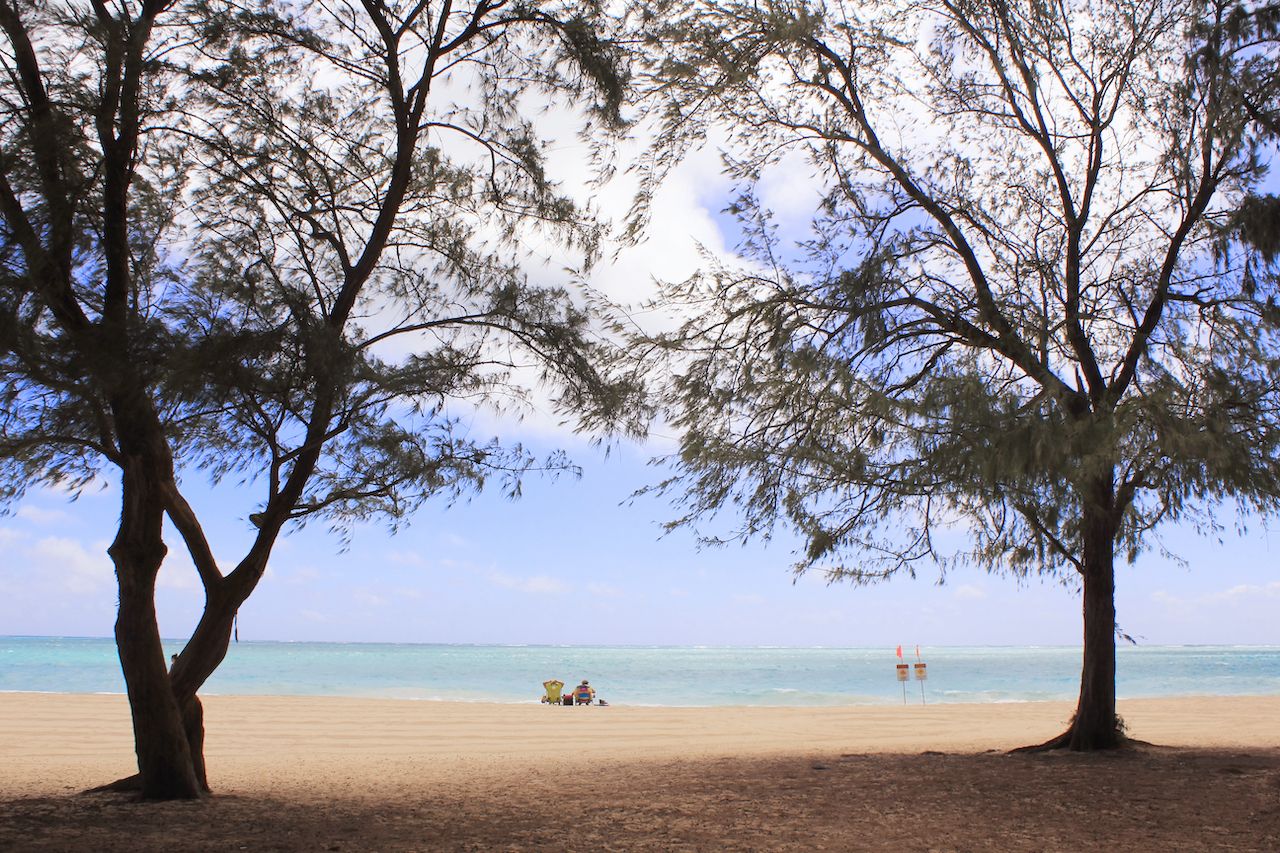 Bellow Fields Beach Park is a bit of a secret to visitors and is found just a little farther north from Waimanalo Bay Beach Park. It’s only open to the public on the weekends; during the week, it serves as a military base. Bellow Fields Beach has clear water similar to Waimanalo, and if you’re looking to strike up a conversation with a local family, this is the place to be. Restroom facilities are also available, and there is even a cafe located at the military base entrance where you can head for breakfast and lunch. 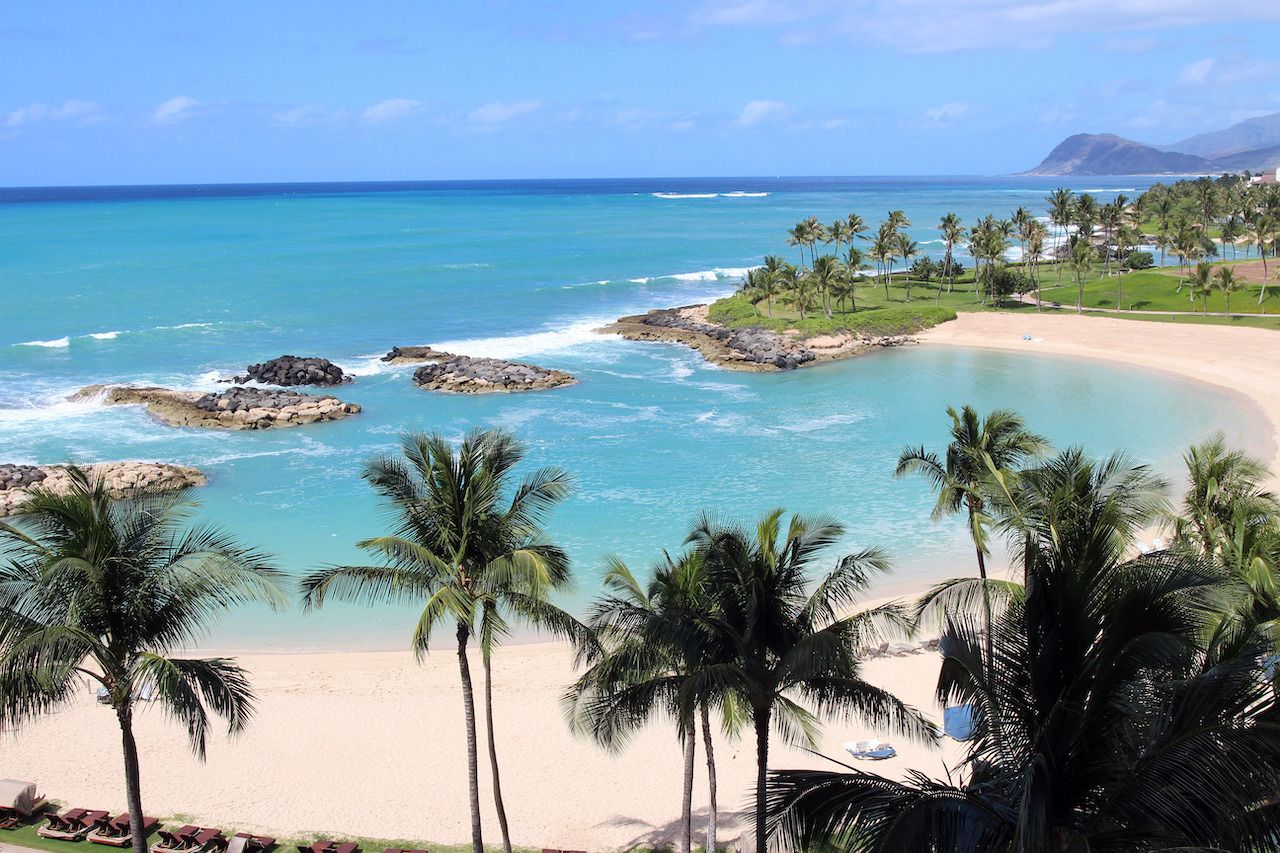 Families with younger kids will particularly love Ko’Olina, which aptly means “place of joy” in the Hawaiin language. Located around 20 miles west of Honolulu, it is here on Oahu’s leeward side that you will find four picture-perfect human-made lagoons with white sand beaches.

The four lagoons connect by pathways that are surrounded by manicured lawns and palm trees. Although Ko’Olina is privately owned with upscale brand-named resorts close by, the lagoons are still open to the public. Parking near the lagoons is available on a first-come-first-serve basis, so families need to get in quickly. Of course, if you are staying at one of the resorts, parking isn’t an issue — as you can just use good old-fashioned foot power.

Historically, this area was considered a sacred place by Hawaiian chiefs and royal families, but these days, it’s also loved as one of the top Oahu beaches for families. The area allows little ones to splash safely in the lagoon, while older kids can rent a paddleboard or snorkel. 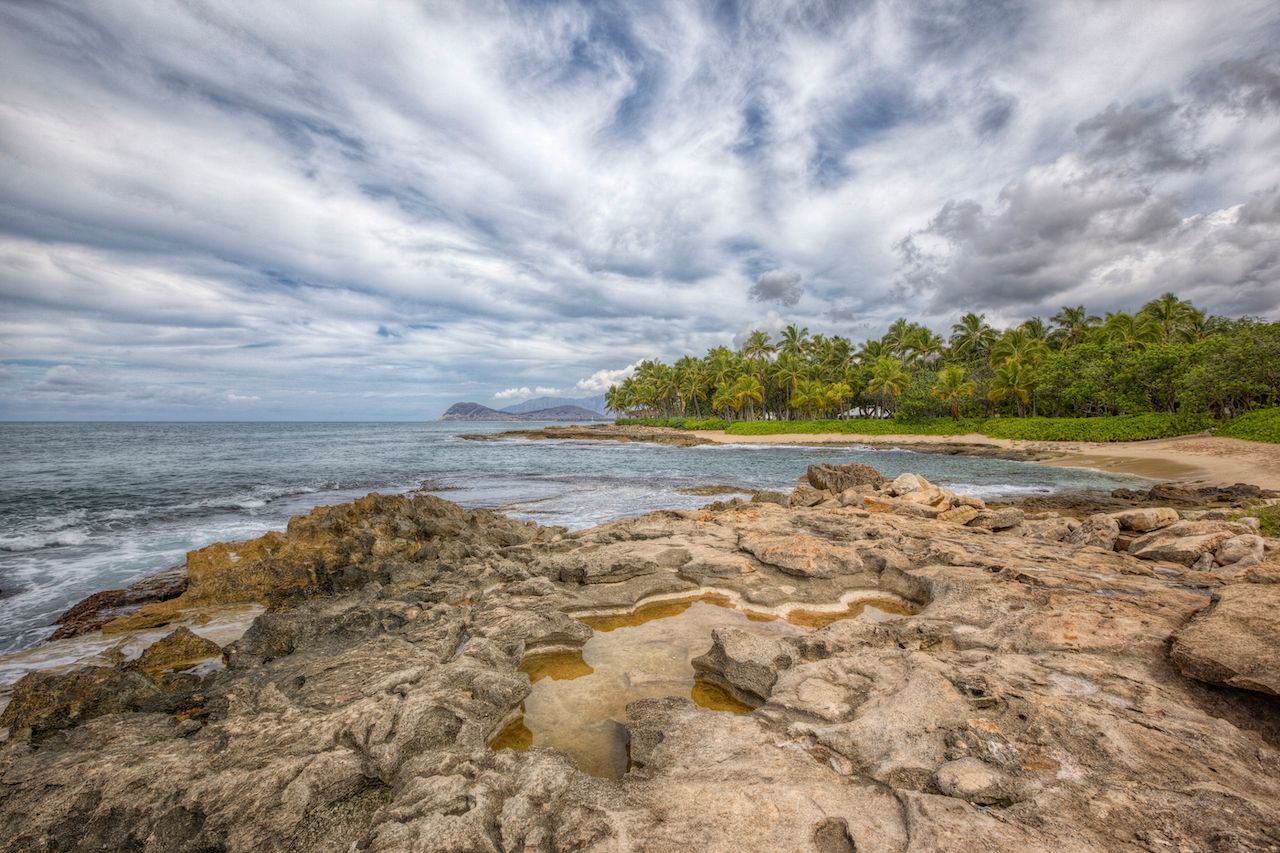 Located just a little farther west from the Ko’Olina lagoons is Paradise Cove, known for the nightly Luau that takes place here. A raised coral reef naturally protects the cove from the ocean, leaving a calm pool of water and resulting in a pretty great place to swim for families.

Paradise Cove is one of those special places that sea turtles frequent, so make sure to bring your snorkel and keep your eyes peeled. Lanikuhonua Lagoon is connected to Paradise Cove via a shallow stretch of water. If you don’t wish to wade through the water to reach it, there is a rocky path down to it that begins at the Four Season Resort — but, with large lava rocks to hop over, it isn’t suitable for younger kids. 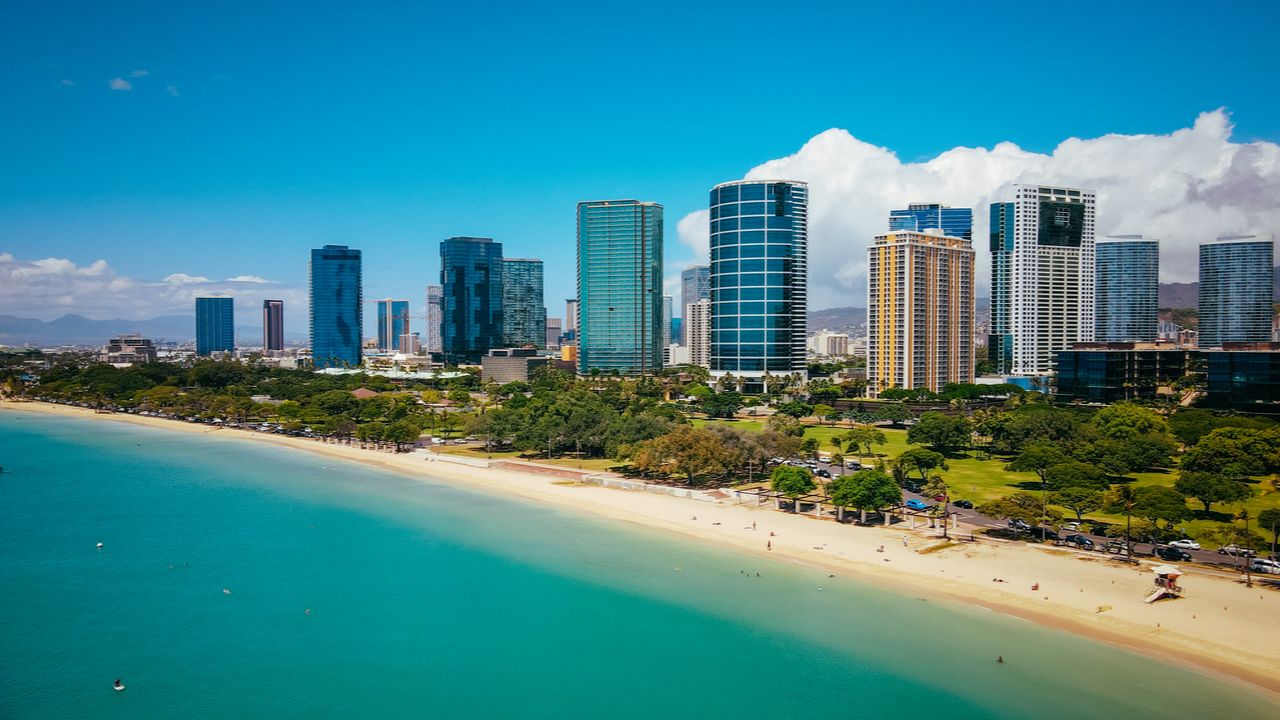 Ala Moana Beach is one of the best-loved Oahu beaches for families. It’s located not far from the Hilton Lagoon in Honolulu but offers a more relaxed experience with shady places to sit. It’s squished between Ala Wai Harbour with its million-dollar yachts and Kewalo Basin Harbour, both of which are lovely to stroll around.

The water at Ala Moana Beach is protected by a reef, resulting in clear, calm water that’s just pure bliss for families, particularly those with younger kids. The views of Diamond Head in the background make for some great photos, and there are plenty of shopping options nearby if you forget to pack lunch.

Keep walking to the tip of the beach park, and you will find Magic Island Lagoon. This is a favorite swimming spot among locals and was created by an artificial peninsula with a large sea wall that extends outward. 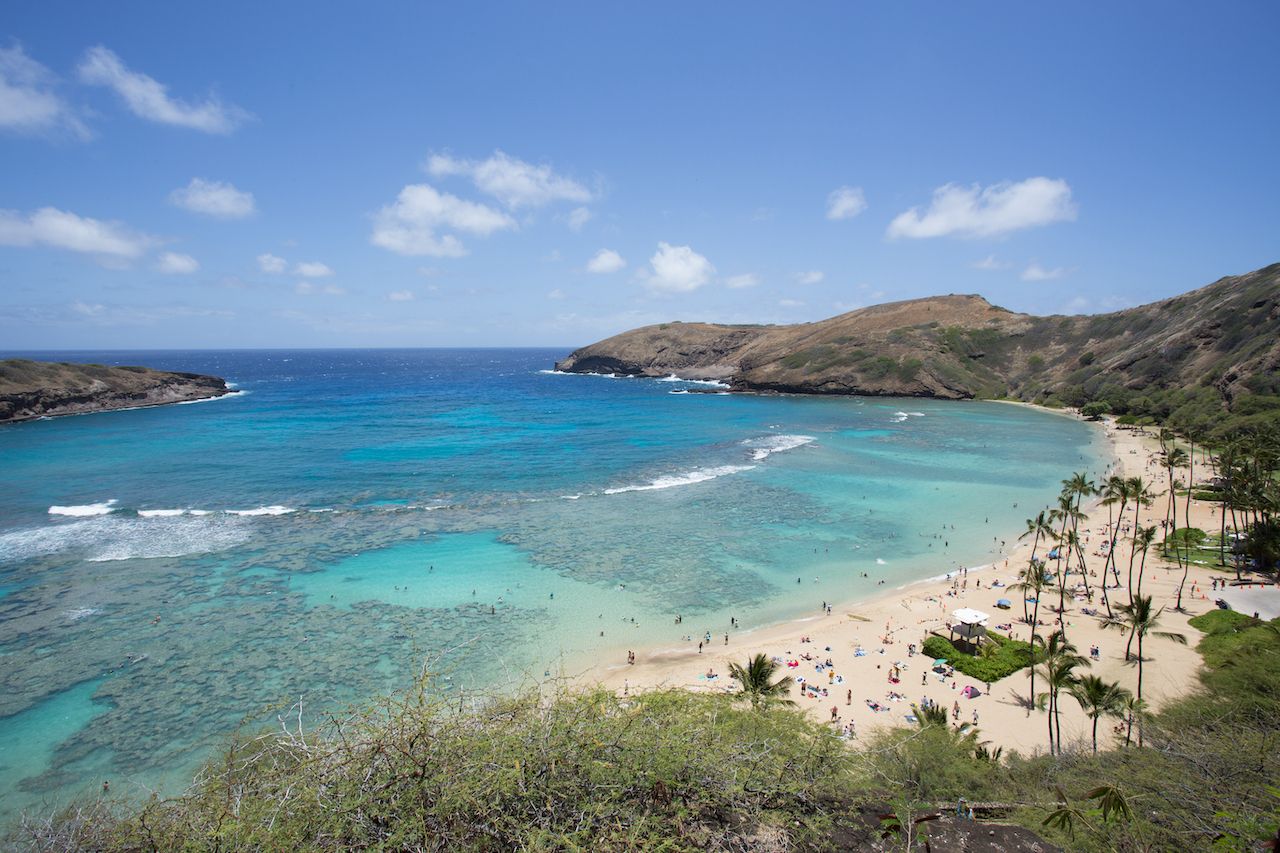 There’s a reason Hanauma Bay is so popular, and it truly does live up to its reputation. Translating to “curved bay,” Hanauma Bay State Park is a nature preserve found along the southeast coast of Oahu in Honolulu. The bay was historically used as a recreational area by Hawaiian nobility, and it’s easy to see why.

Families will find excellent snorkeling and swimming at Hanauma Bay, with around 400 species of fish, including the pretty parrotfish and green sea turtles making their home on the reef. It might not be the best beach on Oahu, but it’s often touted as the best snorkeling spot for families. Even those not confident in the water can quickly duck their head under and instantly be wowed by the bright-colored fish going about their day.

A marine education center was opened back in 2002 and, if you’re a first-time visitor, you will be required to watch a nine-minute video before entering the park to learn about the preservation and safety rules. You can reserve your video viewing time up to 48-hours in advance on the Hanauma Bay site. Walking on or touching the coral is a big NO.

There is a standard entry fee of $12 for each guest; however, kids under 12 years of age are free, as are locals with a state ID and active local military. This fee includes a free tram ride up and down the steep path to the water. There’s an additional $3 parking fee, should you wish to drive yourself. Hanauma Bay is closed to the public every Monday and Tuesday to give the fish a day off to eat without interruption. 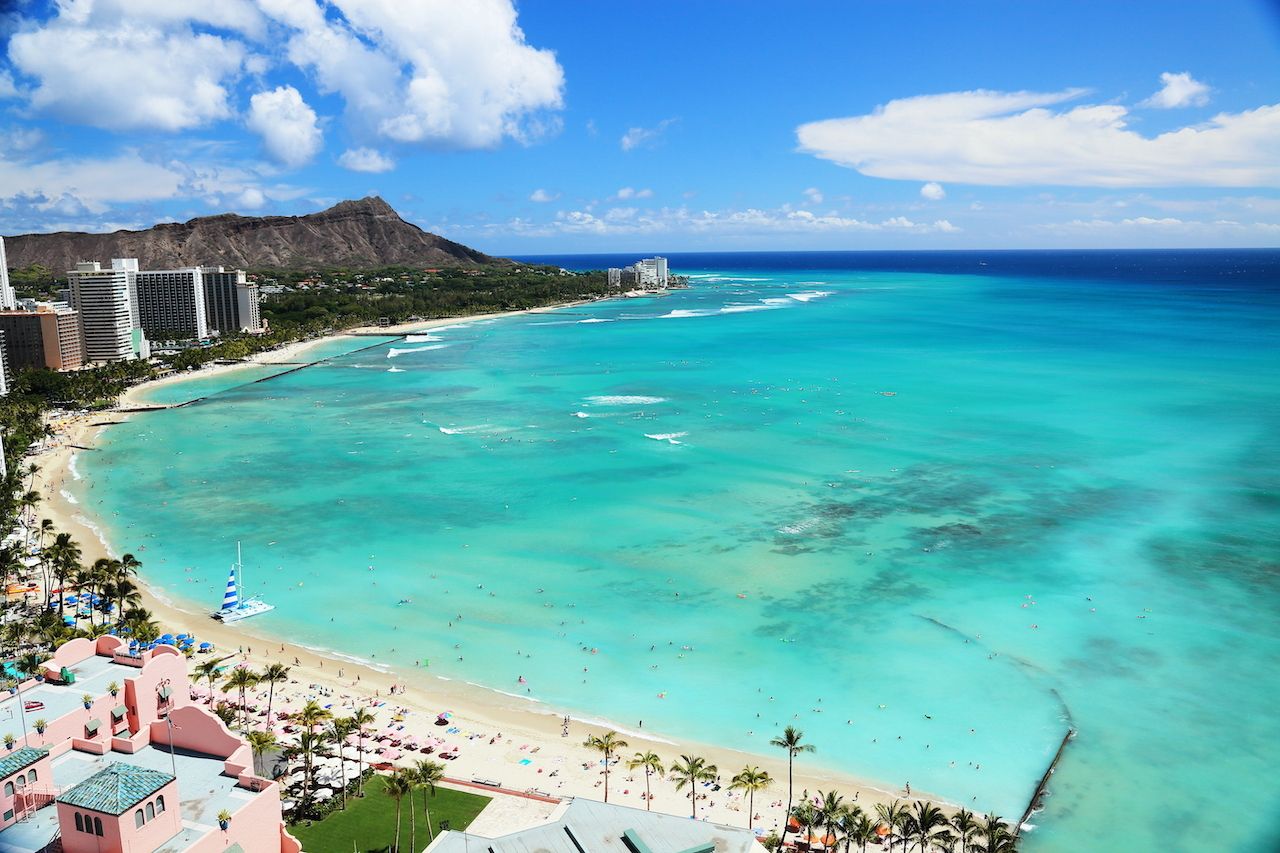 Waikiki Bay is home to many popular beaches, including Waikiki Beach, Kuhio Beach, Fort DeRussy, and Kahanamoku Beach. Families with older kids will likely enjoy Waikiki Beach for its surfing opportunities, but families with younger kids will love setting up right next to the well-known Hilton lagoon.

The fact that Waikiki Bay is the tourist mecca and high-rise center of Honolulu surprisingly doesn’t detract from how wonderful it actually is. Sunsets are stunning most evenings along this stretch, and if that wasn’t enough, every Friday, the Hilton Resort lights up the sky with a free fireworks show.

Waimea Bay is known for big waves but visiting in summer is an entirely different experience. The water is mostly calm, and surfers can be counted on one hand, if at all. The current at Waimea Bay can still be strong, and the water is deep, even when it’s not big wave season — which makes it more suited to older kids. However, younger kids will still have a great time playing in the sand. There are lifeguards and facilities featured here.

October through to mid-March is a whole different beast. This is when the big waves happen due to major winter storms that form off the coast of Japan and Kamchatka. Even when it’s not suitable for swimming, it’s still fun to go and watch the pro surfers in action while the kids play in the sand. If you get to Waimea Bay and it’s a bit rough, head inland to Waimea Falls. It’s not technically a beach, but you can swim in a beautiful freshwater swimming hole here. A small fee is required to enter into Waimea Valley, which is owned and managed by Native Hawaiians, and then through the valley it’s a short 20-minute walk to the falls. 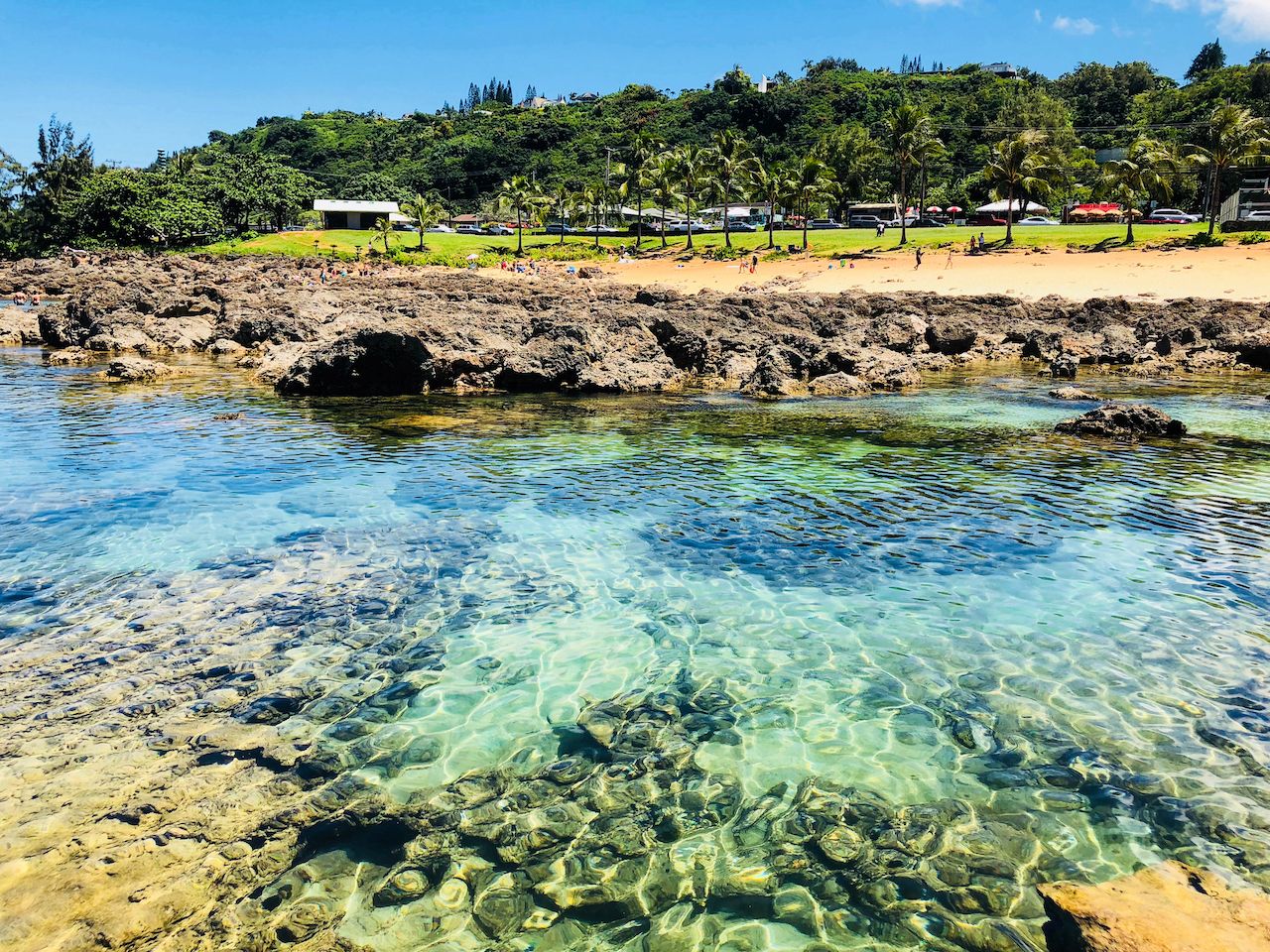 The good news is that Sharks Cove at Pupukea Beach Park is not actually known for sharks. It’s called this because the rocks at the beach resemble the teeth of a shark. Sharks Cove has a decent rocky snorkeling spot that is perfect for families due to the calm waves. Keep in mind that you will need swim shoes here as the rocks get pretty slippery.

Up the other end of the park is a small beach and snorkeling spot called the Three Tables. Pupukea Beach Park is safer in the summer months as, once the big wave season starts, the ocean crashes over the rocks with force at high tide. 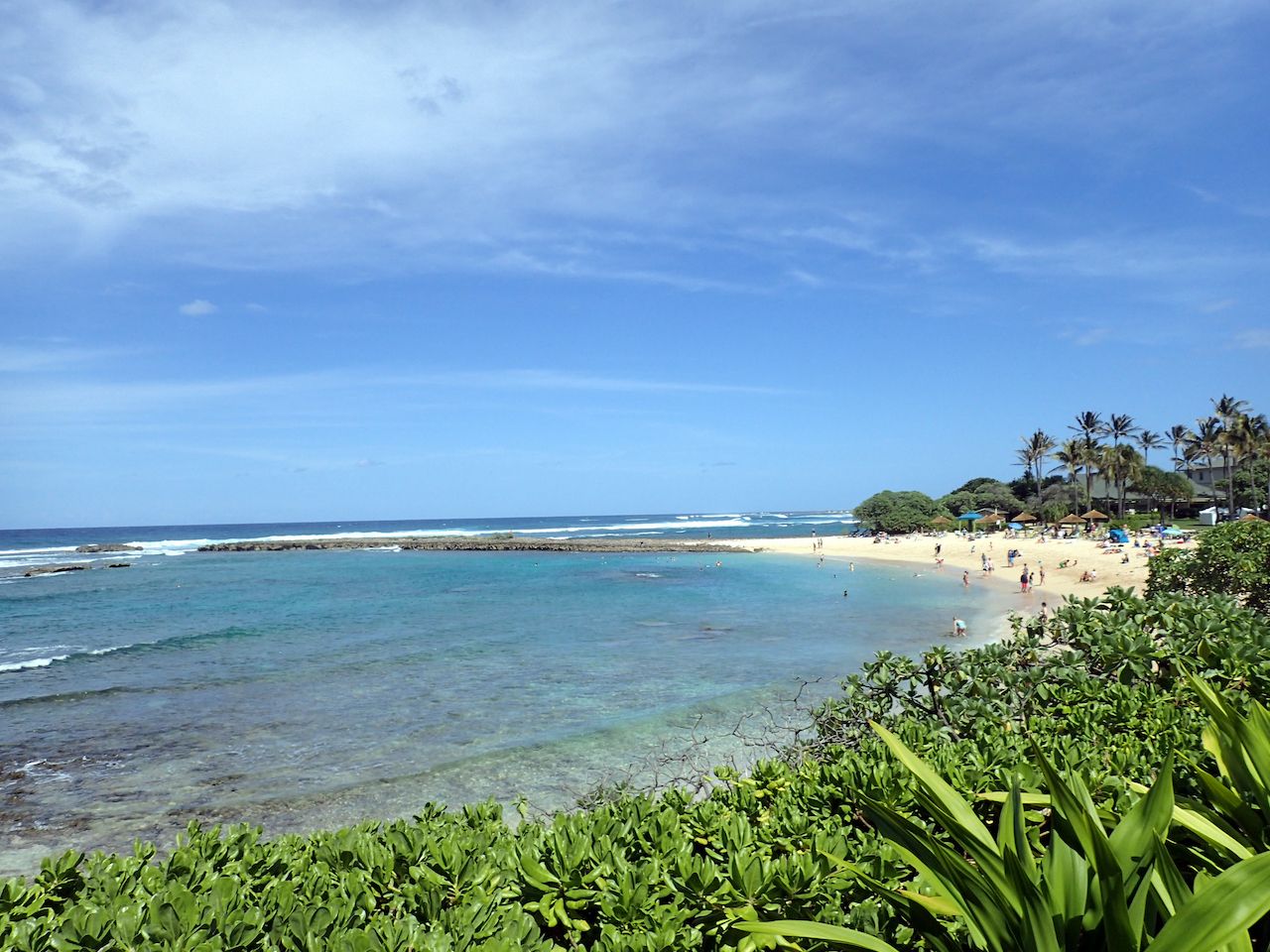 Turtle Beach at Kuilima Cove on the North Shore is another great snorkeling area for families — except this one allows you to see the coral without the crowds. Aptly named Turtle Beach for its turtle spotting opportunities, the water here is not as clear as other beaches in Oahu. Kuilima Cove is the place to glimpse Hawaii’s state fish, the humuhumu. Turtle Bay resort right next door is a great option for avoiding the crowded resort area in Honolulu.

These Inside Photos Show Hawai'i’s Latest Volcanic Eruption Up Close

The Essential US Virgin Islands Travel Guide, From Beaches To Eats