SOME PEOPLE head to BC to ski and party in Whistler, or to have a 9% quadruple-hopped IPA and stroll around Stanley Park in Vancouver. Not as many head inland, but there are plenty of reasons to. Four hours northeast of Vancouver, you arrive in a brilliant region known as the Okanagan Valley, which is packed with vineyards, lakes, rolling green hills, a desert, and a long history. I had the chance to take it on by bike, a restored locomotive train, a 1952 pickup truck, and more. 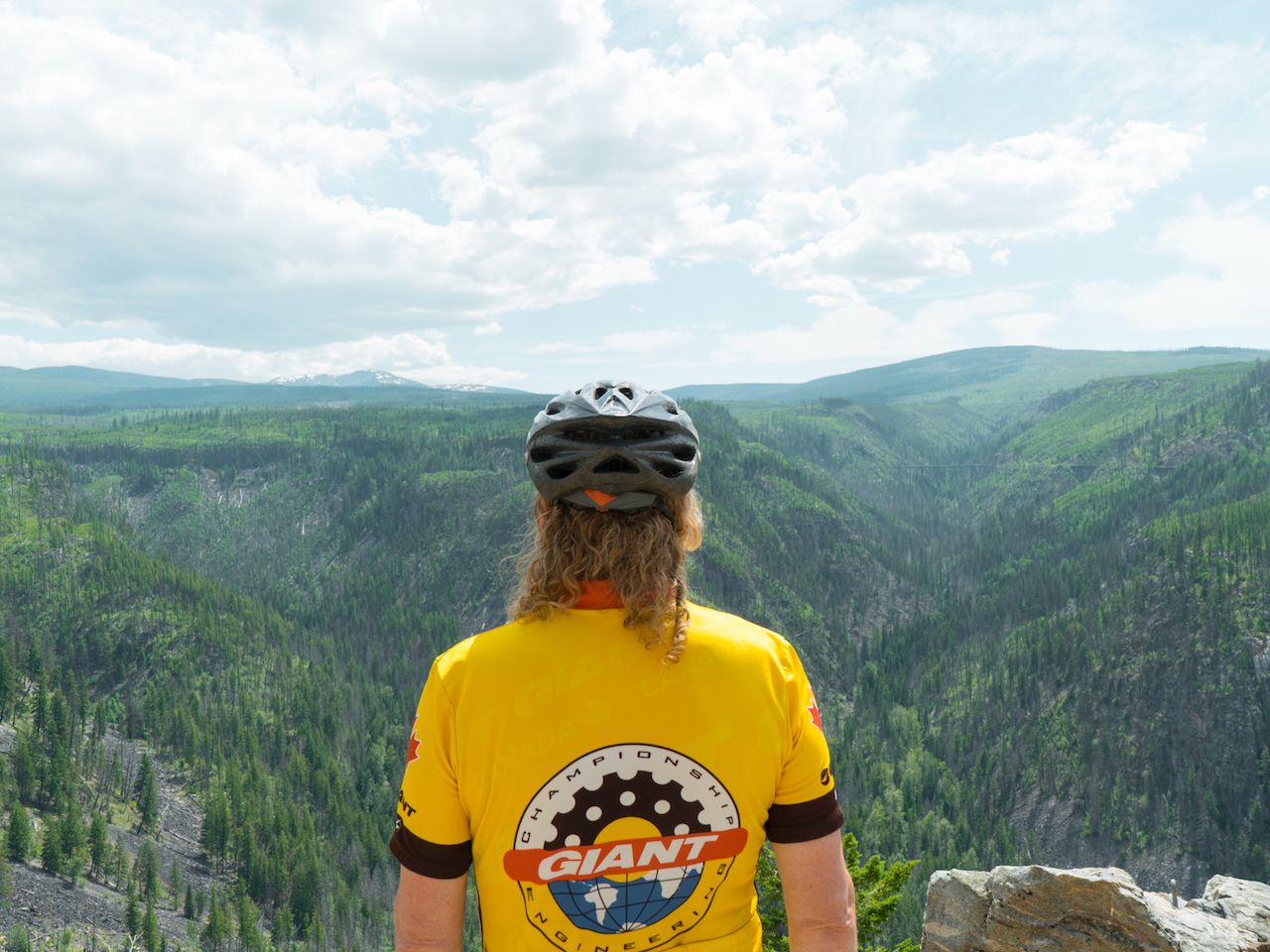 My adventure began in Kelowna, biking south to Penticton along the Kettle Valley Trail. What was once the historic Kettle Valley Railway is now is a network of trails that spread across inland BC for safe cycling with very low incline and grade. I met up with my guide, Ed from Monashee Adventure Tours, and as we departed Kelowna, we cycled over remodeled trestles (long wooden bridges) and through tunnels once used by old steam engine trains. Ed told me tales of pioneers, early settlers, and First Nations history as we went. 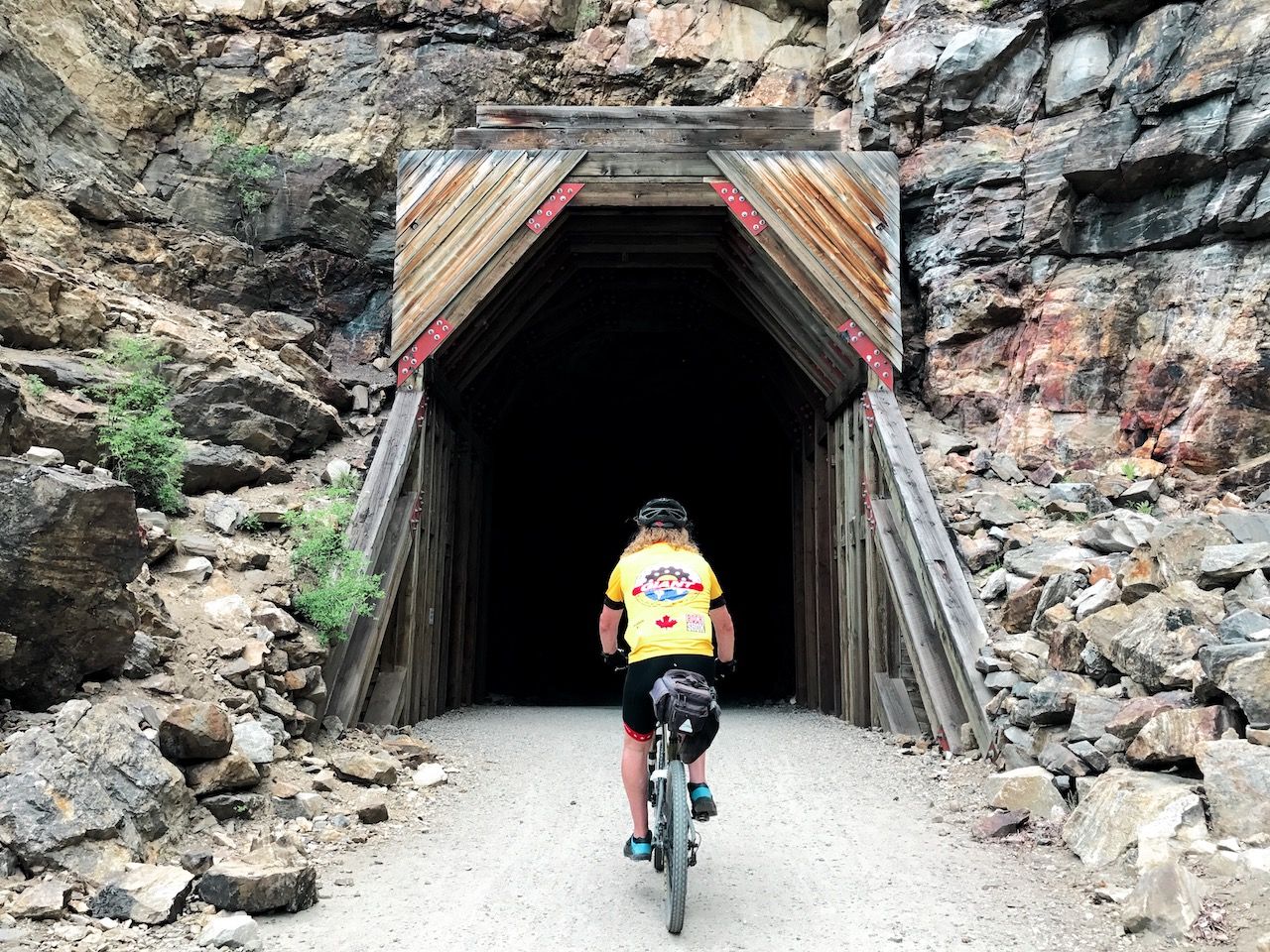 The steam engines used to use these tunnels for passage through the mountains, and they have since been converted for safe use by cyclists on the KVT. They are a great place to find shade on the hotter days, and a unique feature to pass through. 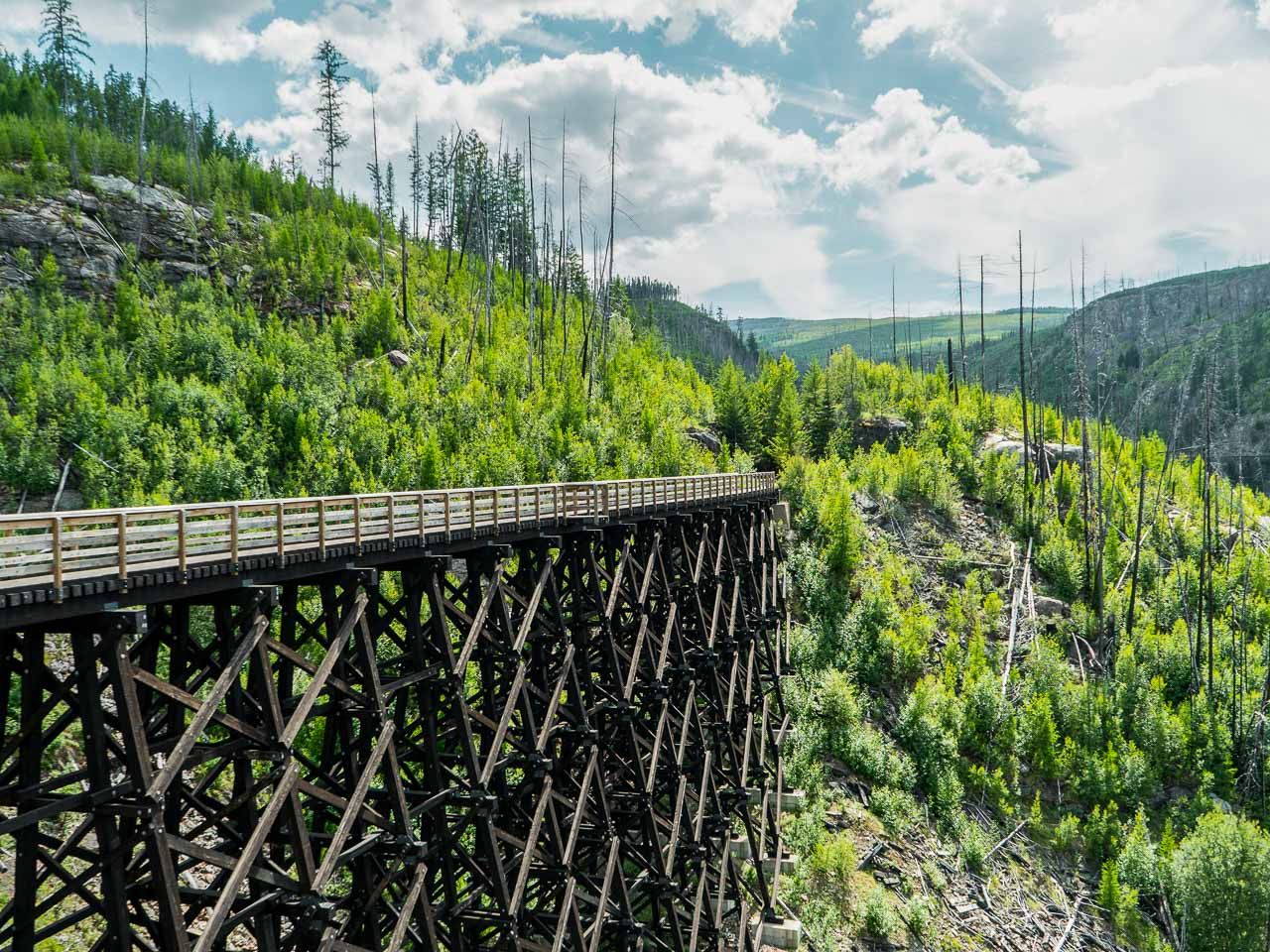 I found the experience of riding a bike over these long wooden trestles which were once steam engine tracks to be a highlight of my trip. 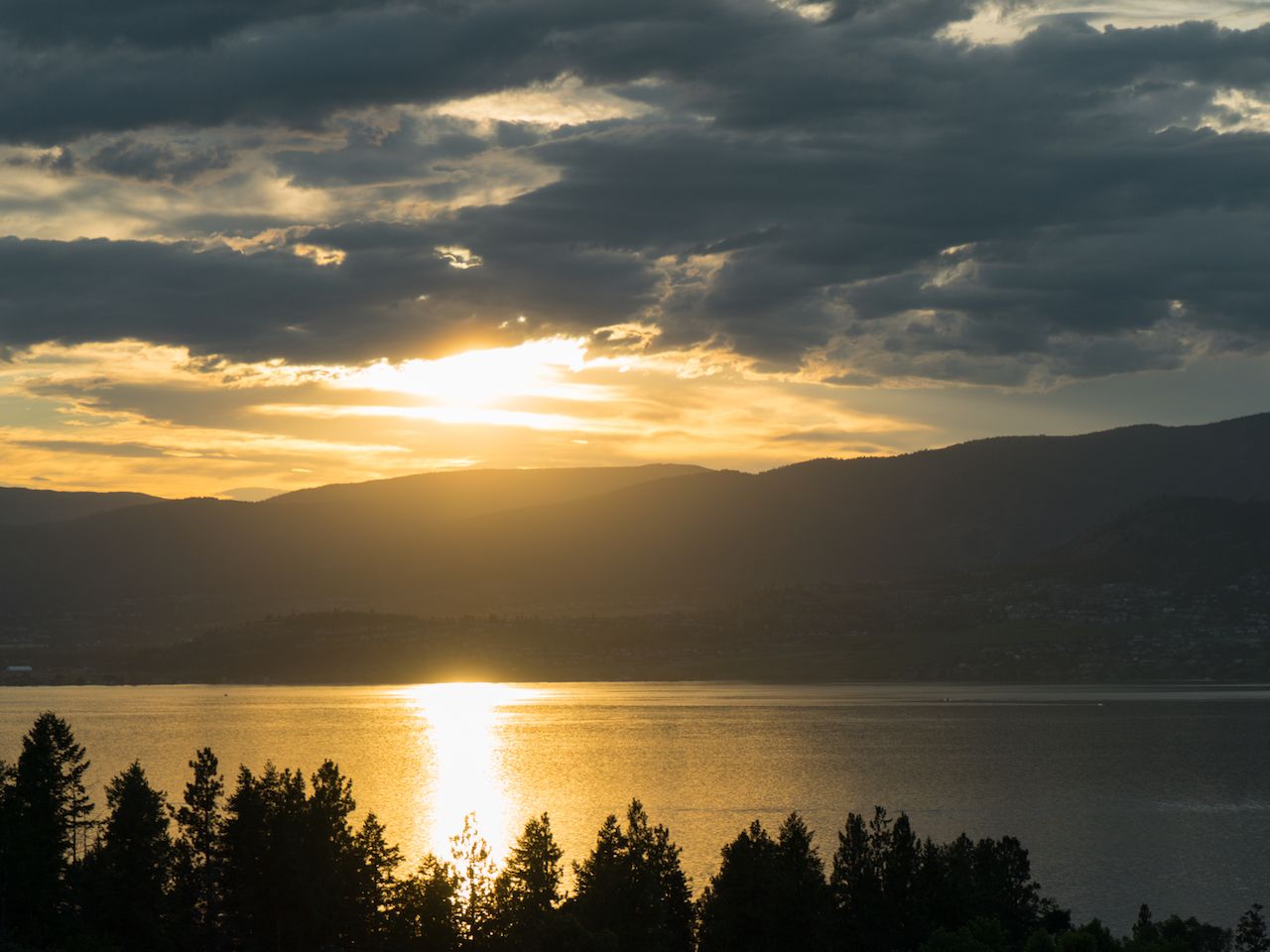 Watching the sun set on Okanagan Lake was the best way to end a long day of cycling. This far north in July, the sun didn’t set until about 10:30 PM, so there was plenty happening around the lake until well into the night. 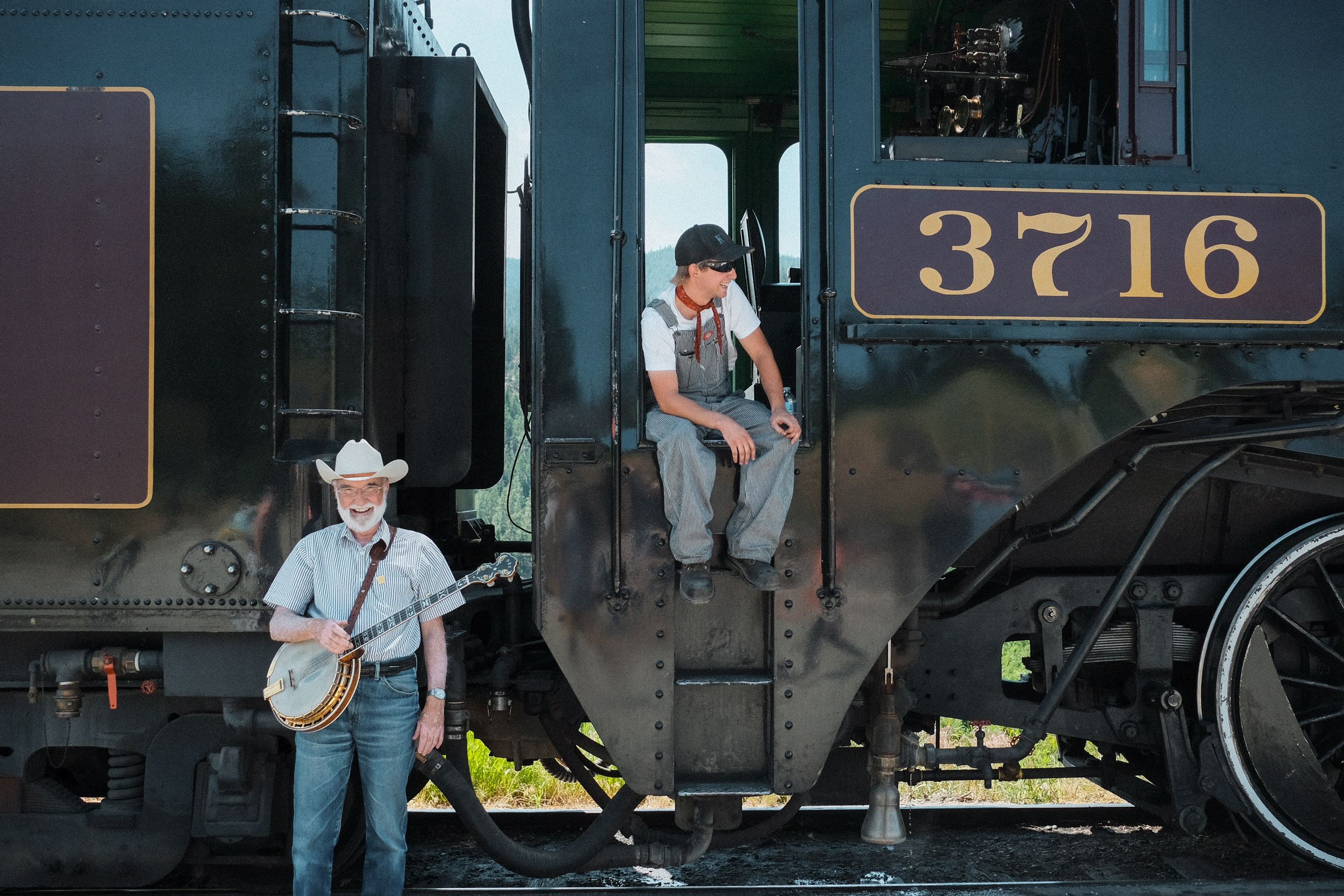 This is the steam engine train we rode on the The Kettle Valley Steam Railway. The KVSR is a 90-minute train ride on a restored locomotive in Summerland, BC. You can also opt for the “Train Robbery” experience over the regular ride. Pictured here are Felix, the banjo player who walked up and down the train taking requests for songs, and the conductor of the train. 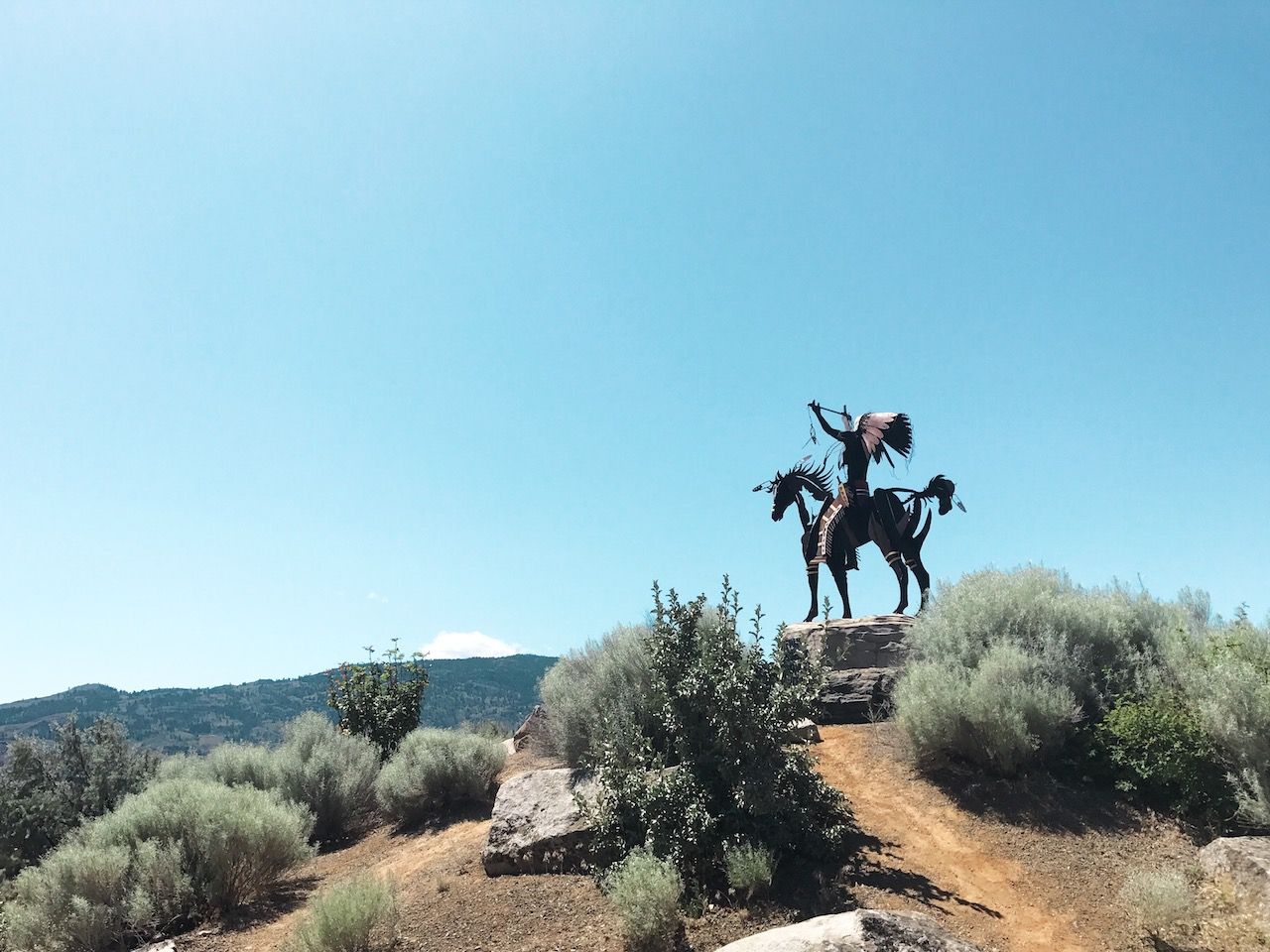 Though we didn’t have much time to tour the nature preserves and museums in the city of Osoyoos, I felt there was a strong effort to protect and promote the history here. Indigenous people have lived here for thousands of years, passing on their traditions orally from generation to generation. European settlers didn’t arrive until 1811, though they did bring the idea for farming fruit which is a large resource for the area now. Still, conservation and sustainability are practised by most of the locals in their methods for growing crops and livestock, with many sustainability concepts coming from the original inhabitants, the Syilx First Nations peoples (or, the Okanagan Nation Alliance which includes 8 different First Nation communities). 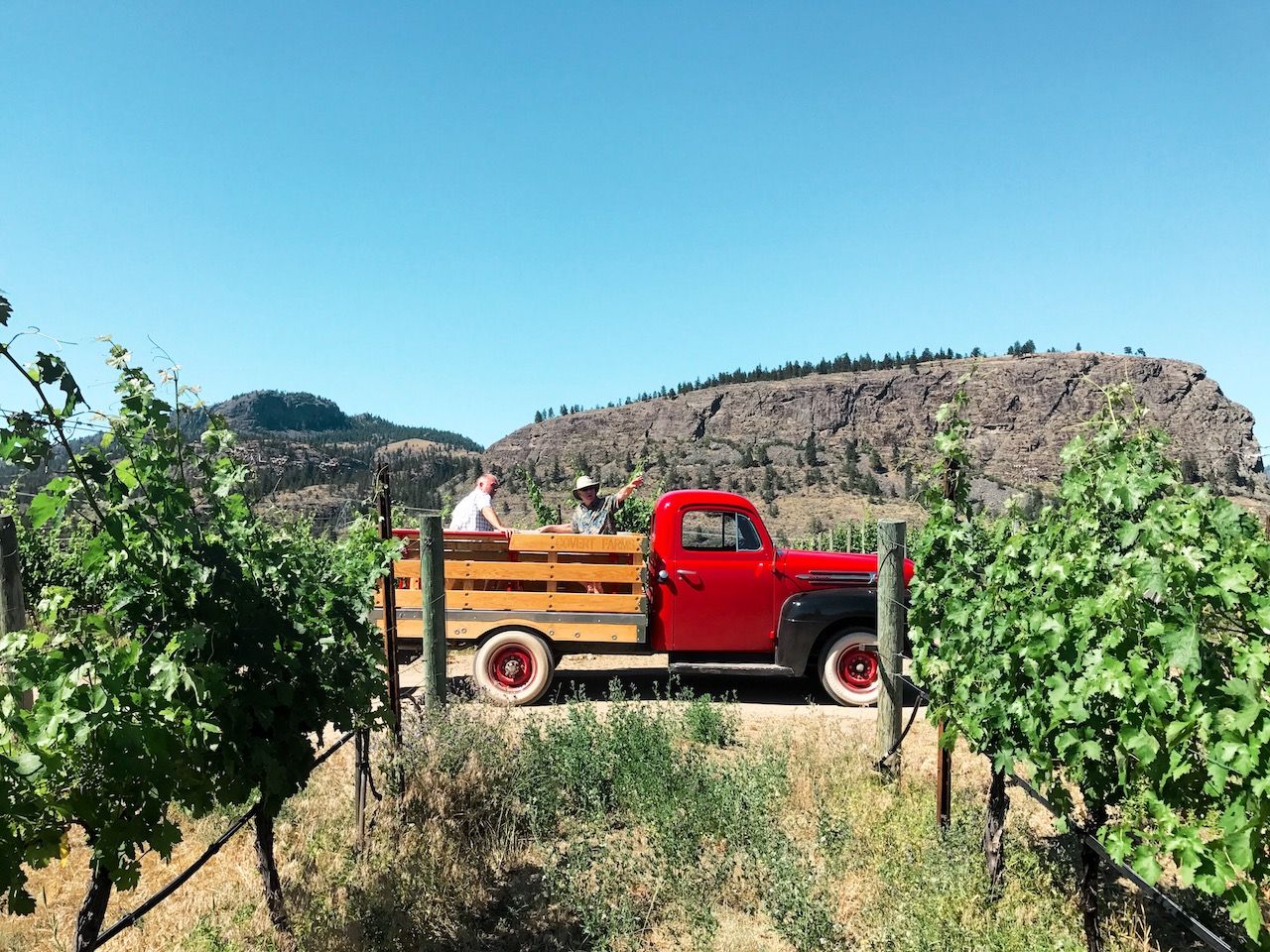 On arrival at Covert Farms Family Estate in Osoysoos, we were driven around in a vintage 1952 Mercury one-ton truck while our guide described the different grapes, the kinds of wines each grape variety makes, and other aspects of the working farm. 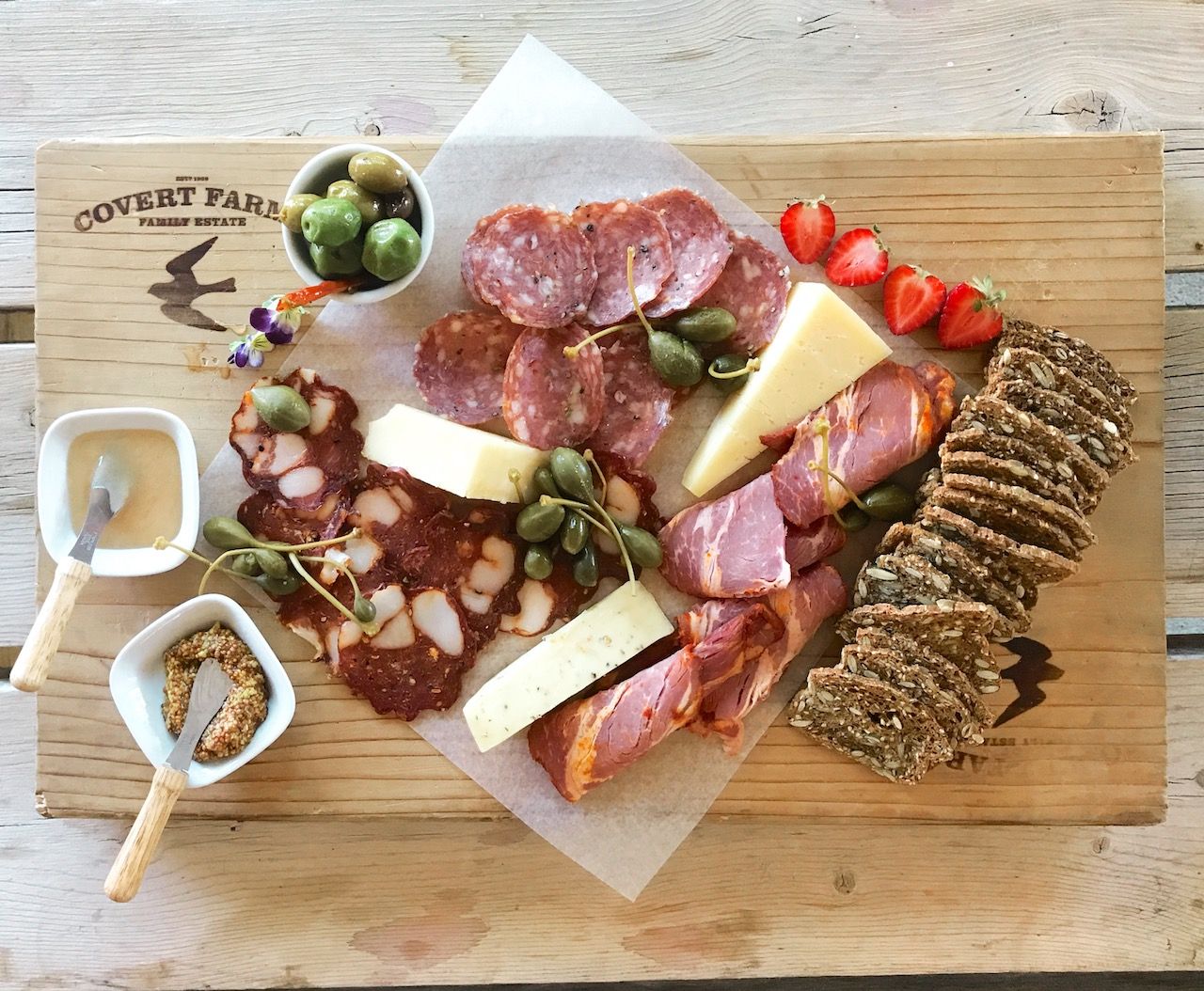 This is the charcuterie plate that was presented to us at Covert Farms Family Estate following our tour. The food ranged from olives to assorted meats that had all been sourced from this very place. Participating in this farm-to-table tradition in its purest form was an uplifting experience. There is a huge connection between locals and their food here, and I hope to see this spread to more regions as its benefits were clear: fresh, delicious foods, sustainable farming, economic boosts, respect for the land and its history, a connection to our own food, as well as health benefits. 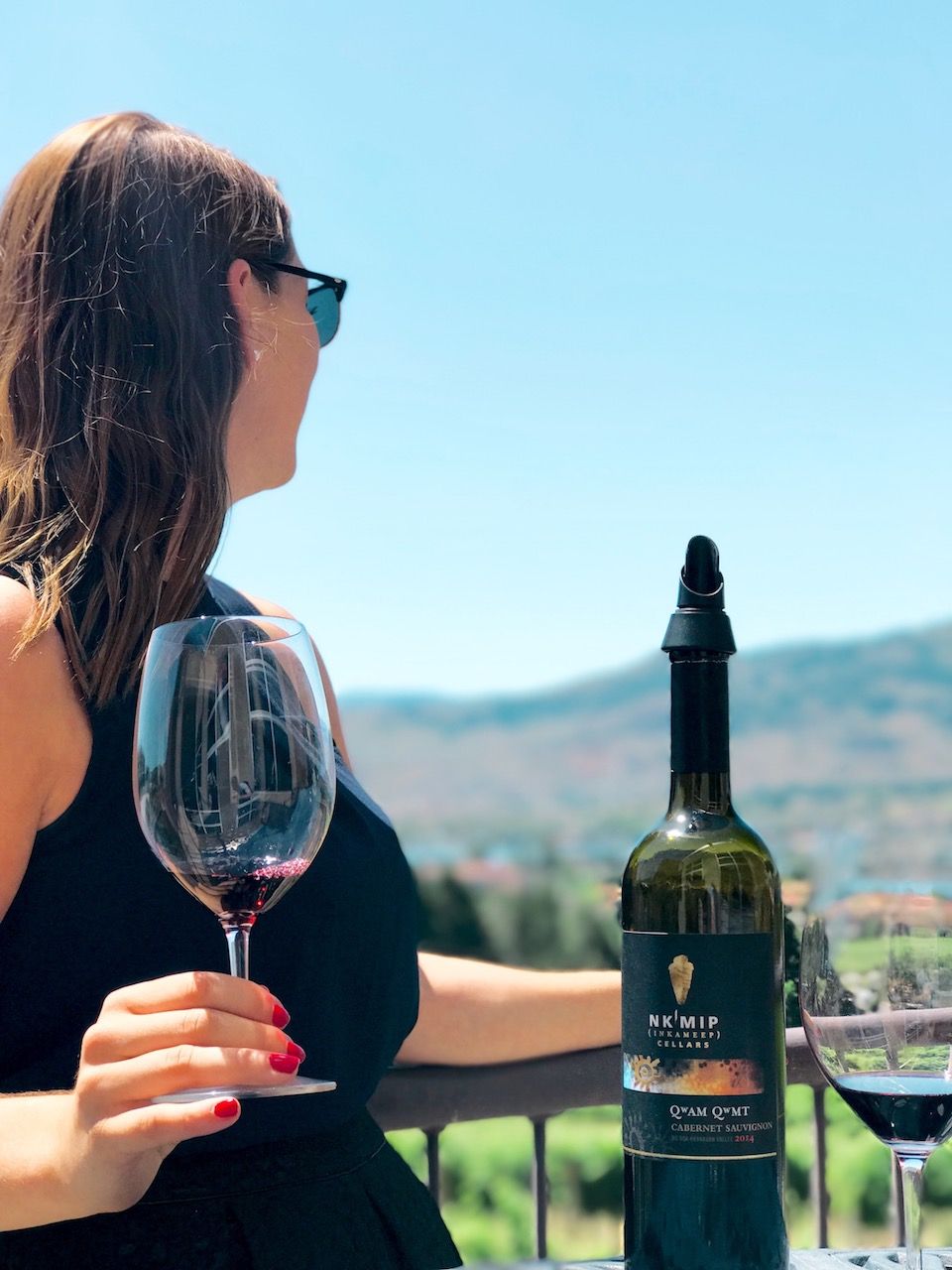 NK'MIP Cellars (pronounced In-ka-meep)in Osoyoos is the first Aboriginal-owned winery in North America. They’re an award-winning winery known for their merlot, pinot noir, chardonnay, and dreamcatcher (a blended white wine). Between the patio and view of the lake and vines, the warm dry summer air (as Osoyoos is actually considered a desert region), the local-focused food on offer, and being an indigenous-owned operation, our last stop at Nk’mep really brought home the atmosphere of the Okanagan Valley: respect for the land, celebrating the food, honouring its history, and enjoying the moment.

Note: Andrew was a guest of Destination BC and Thompson Okanagan Tourism Association

Tagged
Trip Planning British Columbia, Canada
What did you think of this story?
Meh
Good
Awesome