As the coronavirus pandemic alters daily life, queer events around the world are getting canceled, but there’s one event COVID-19 can’t touch: Couchella. That’s right — the hottest ticket in town is the house-party-of-one you’re hosting from your living room.

Proximity doesn’t preclude us from gathering in the digital age. While it’s necessary to practice social distancing to stop the spread of the coronavirus, a social recession doesn’t need to be the byproduct of staying safe. Whether you were planning a trip to the theater, a night out dancing, or a celebration with your chosen family in the coming weeks or months, there are online alternatives to help you find similar gatherings.

For many, it may feel like the future has arrived sooner than expected. Luckily, it’s a future for which we’ve been planning. As artists and teachers continue sharing their work on the web, you’re only a mouse click away from finding the community you need to make it through these trying times.

Here are the best LGBTQ events you can stream from your living room.

Editor’s note: If you enjoy a free service provided by a performer or artistic venue on this list, consider giving them a donation via Venmo or PayPal. Many in the performance industry are unemployed due to the pandemic. Many won’t have jobs waiting for them once the storm passes, either. Artists are always here to lift us up; they need us now to return the favor. 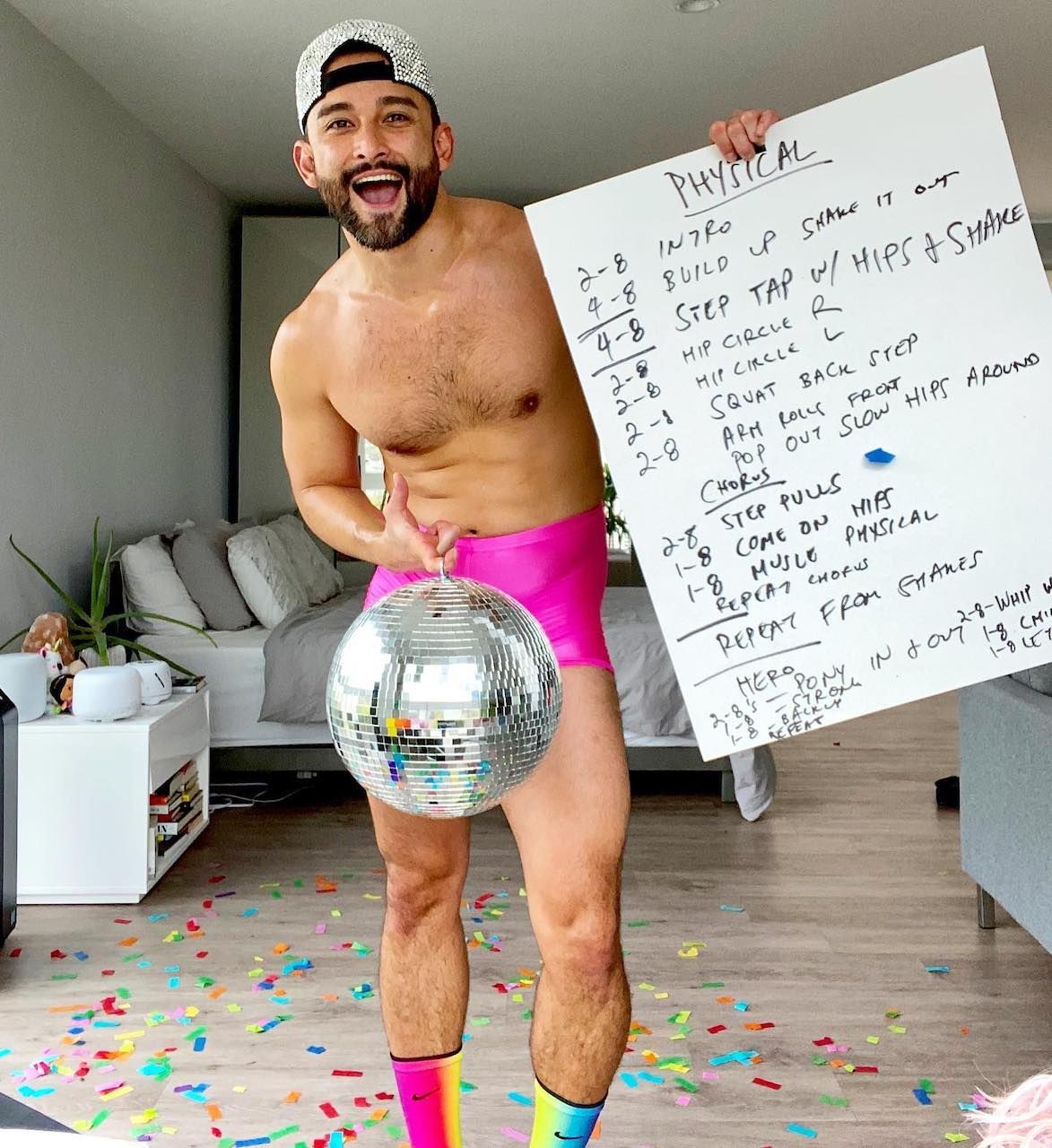 Mark Kanemura, a former back-up dancer for Lady Gaga and a contestant on So You Think You Can Dance, broke the internet in 2018 while tossing rainbow wigs in the air to Carly Rae Jepsen’s “Cut to the Feeling.” Kanemura’s Instagram is a treasure-trove of similarly joyful booty-shaking extravaganzas all filmed within the confines of his Los Angeles bedroom. In response to the COVID-19 crisis, he’s inviting the world to join him for daily Instagram Live dance parties. Expect tons of glitter, campy costumes, and enough wigs to supply a season of queens on RuPaul’s Drag Race. Check his Instagram to find out when the party begins.

2. Laugh with Justin Sayre at “The Meeting”

Queer cabaret performer and artistic multi-hyphenate Justin Sayre has been hosting his campy PTA meeting on all things LGBTQ in New York City since 2009. While Joe’s Pub canceled his March engagement, Sayre will be broadcasting a live performance from a “secret, subterranean nightclub” (i.e. nightclub performer Julian Fleisher’s basement) on Sunday, March 22, at 8:00 PM. For more information, check out the Facebook event page.

3. Listen to a queer podcast 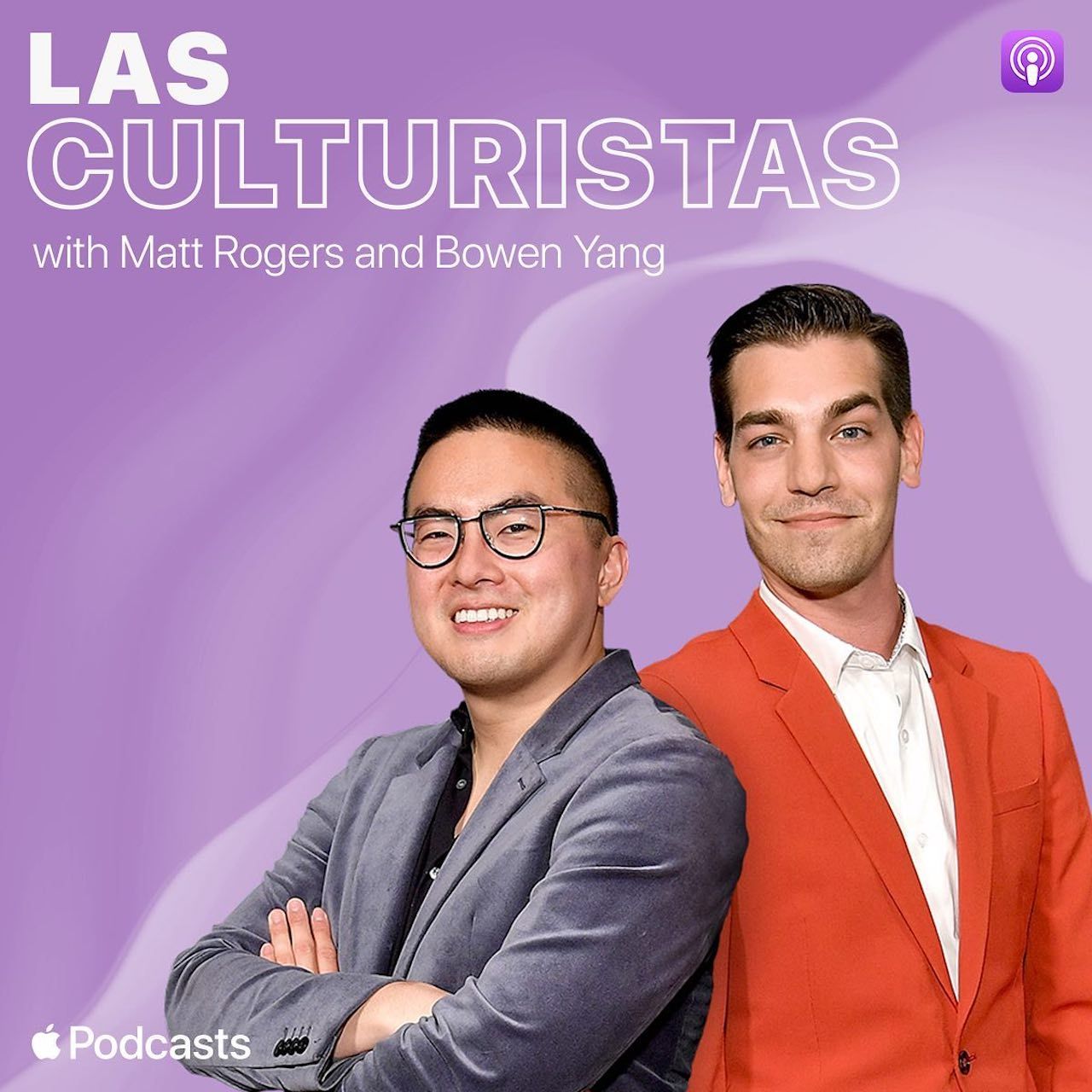 After almost a three-month hiatus, sassy podcast comedians Matt Rogers and Bowen Yang are back with weekly episodes of Las Culturistas. Their quippy gabfest covers all things pop culture and features a special guest every week (a few favorites include Rachel Bloom, Nathan Lee Graham, Betty Gilpin, and Elana Glazer). There’s no doubt the pod’s “I don’t think so, honey!” segment — a game in which the hosts and their visitor get 60 seconds to rag on something they hate — is each episode’s highlight. (I’m expecting a segment entitled “I don’t think so, honey: buying toilet paper in bulk!” in the coming weeks.) You can find the podcast on iHeartRadio, or wherever you listen to your podcasts. Food 4 Thot and LGBTQ+A are two other queer iHeartRadio podcasts worth checking out.

4. Catch a live concert on StageIt

StageIt produces live online video concerts where fans can chat with one another and interact with performers throughout the show. So far this week highlights have included Broadway’s Telly Leung (Aladdin) and Shoshana Bean, a former Elphaba in Wicked, sang yesterday. Still to come Pam Ann — the airline attendant alter-ego of Australian comedienne Caroline Reid — invites fans to fasten their seatbelts for her show, PAMDEMIC, on Friday, March 20. Check the site for more upcoming shows. 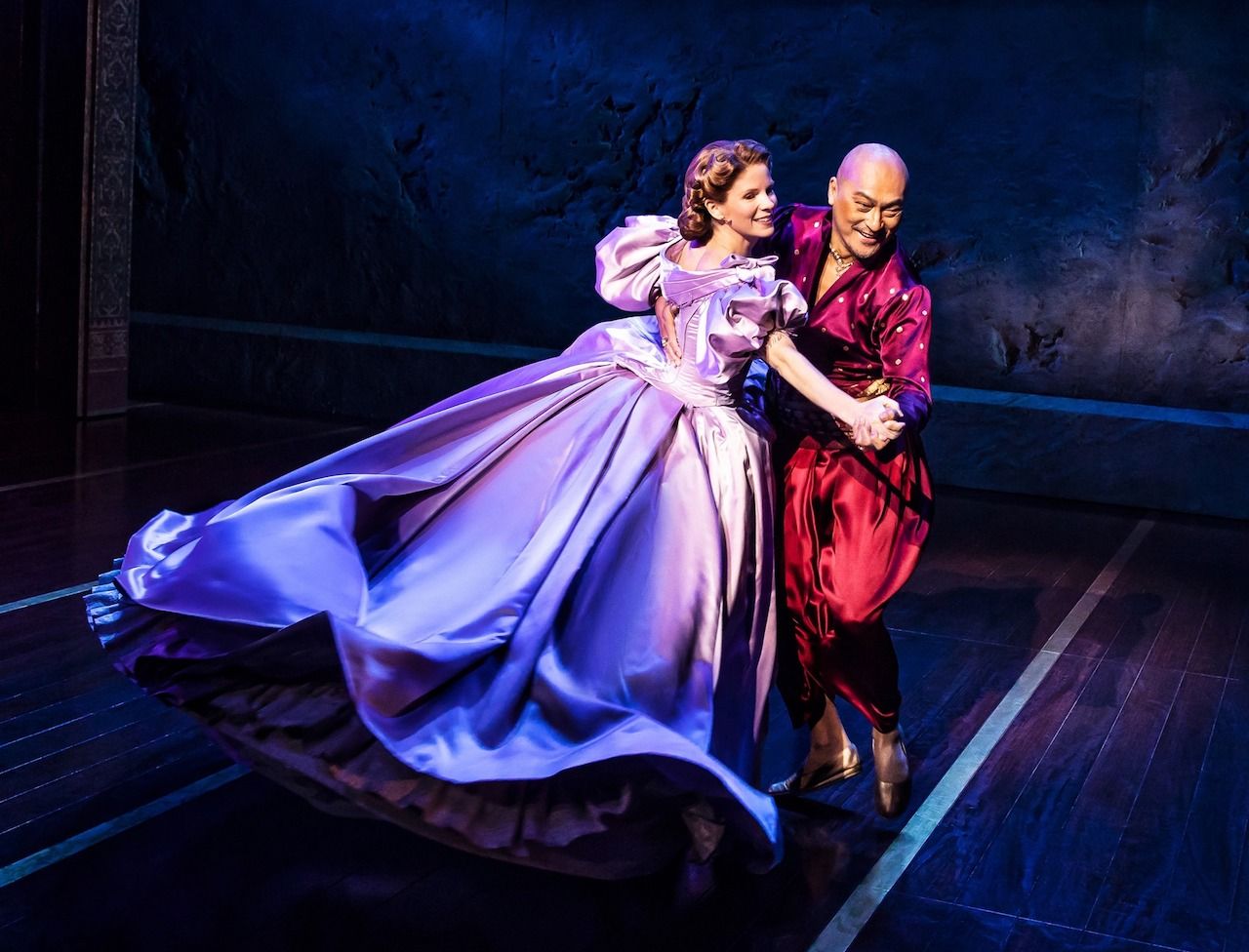 New York’s theater scene may be dark for the next month, but thanks to Broadway HD, you can still visit the Great White Way without leaving your bedroom. Some of the website’s best queer-themed content includes Paula Vogel’s “Indecent” (2017 Tony Award for Best Play), “Kinky Boots” (2013 Tony Award for Best Musical), and the 2016 revival of “Falsettos” starring Christian Borle and Andrew Rannells. For opera buffs, check out “Brokeback Mountain,” a musical adaptation of the short story by Annie Proulx.

New York’s Metropolitan Opera, which canceled all performances through March 31, will be live-streaming past productions on their website through the end of the month. The roster of impressive offerings includes the 2007 production of “Eugene Onegin,” by queer Russian composer Pyotr Tchaikovsky, and the 2008 production of “La Boheme.”

For classical-music junkies, the Berlin Philharmonic has its entire catalog free for the next month through its digital concert hall. Check out a comprehensive list of other live-streaming concerts on the website for public radio station WKAR.

7. Rock out with Yungblud 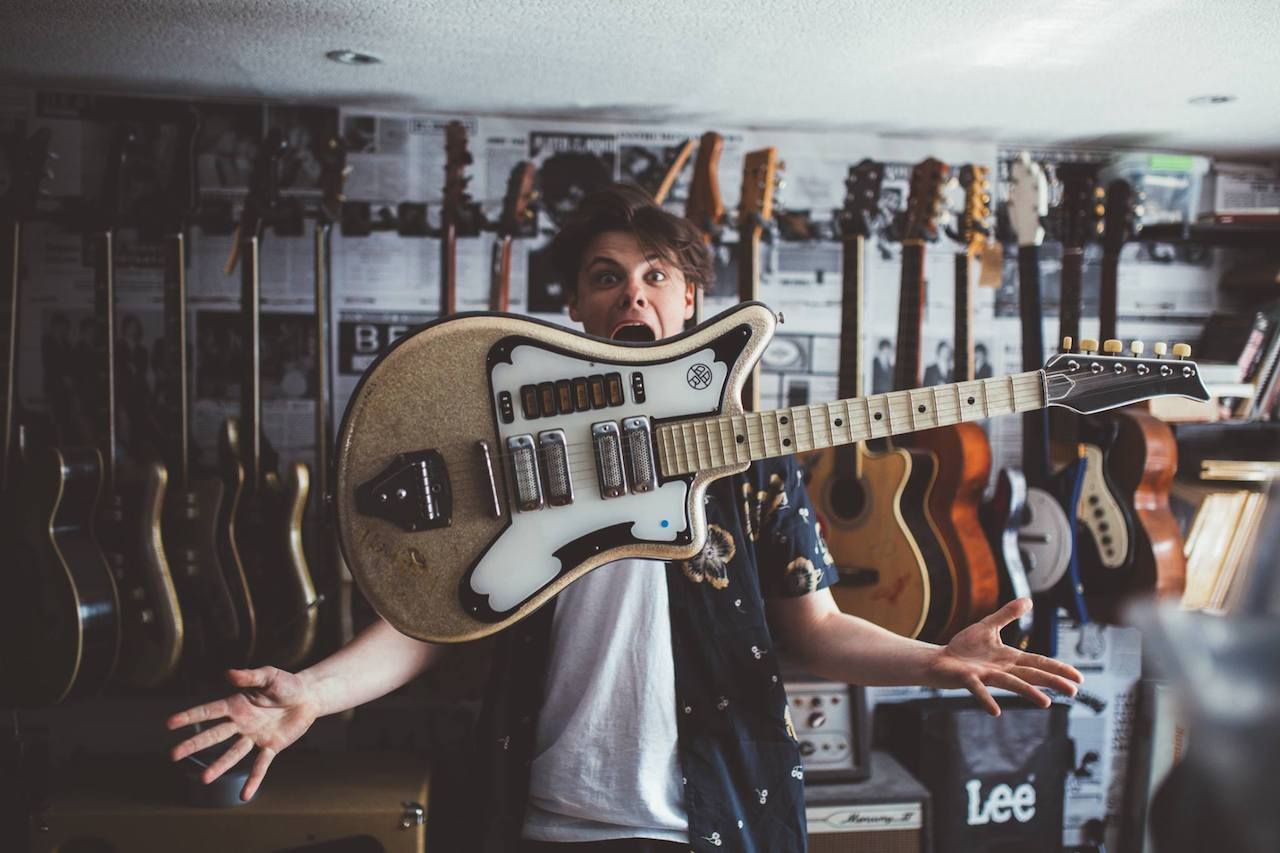 If head-banging is your go-to for stress relief, queer singer Yungblud’s recent concert on Youtube might be the medicine your doctor ordered. After canceling his upcoming tour dates, including a stint at Coachella, the English musician decided to get creative and took to the internet as an alternative way to reach his fanbase. The concert, “Shit’s Weird Keep Calm and Carry On,” features performances by Machine Gun Kelly, Bella Thorne, and Oliver Tree; there’s even a live Q&A with fans who tuned in on social media. Between downing coronas and screaming pop-emo ballads, Yungblud’s punk-rock live stream is the angst-fueled decompress we all need right now.

If you want a gaycation to Mexico’s west coast, visit NYC-based drag queen Sutton Lee Seymour’s Facebook page. Seymour, beloved for her Angela-Lansbury-meets-Man-Eating-Plant shtick, is currently performing a one-woman show at the Palm Cabaret and Bar in Puerto Vallarta. She filmed the first 30 minutes of her cabaret this past Friday night, and you can still watch the video on her Facebook page. The show, a wet dream for anyone who prays at the altar of Alan Menken and Howard Ashman, offers a carefree respite from current events.

9. Get into the Indigo Girls 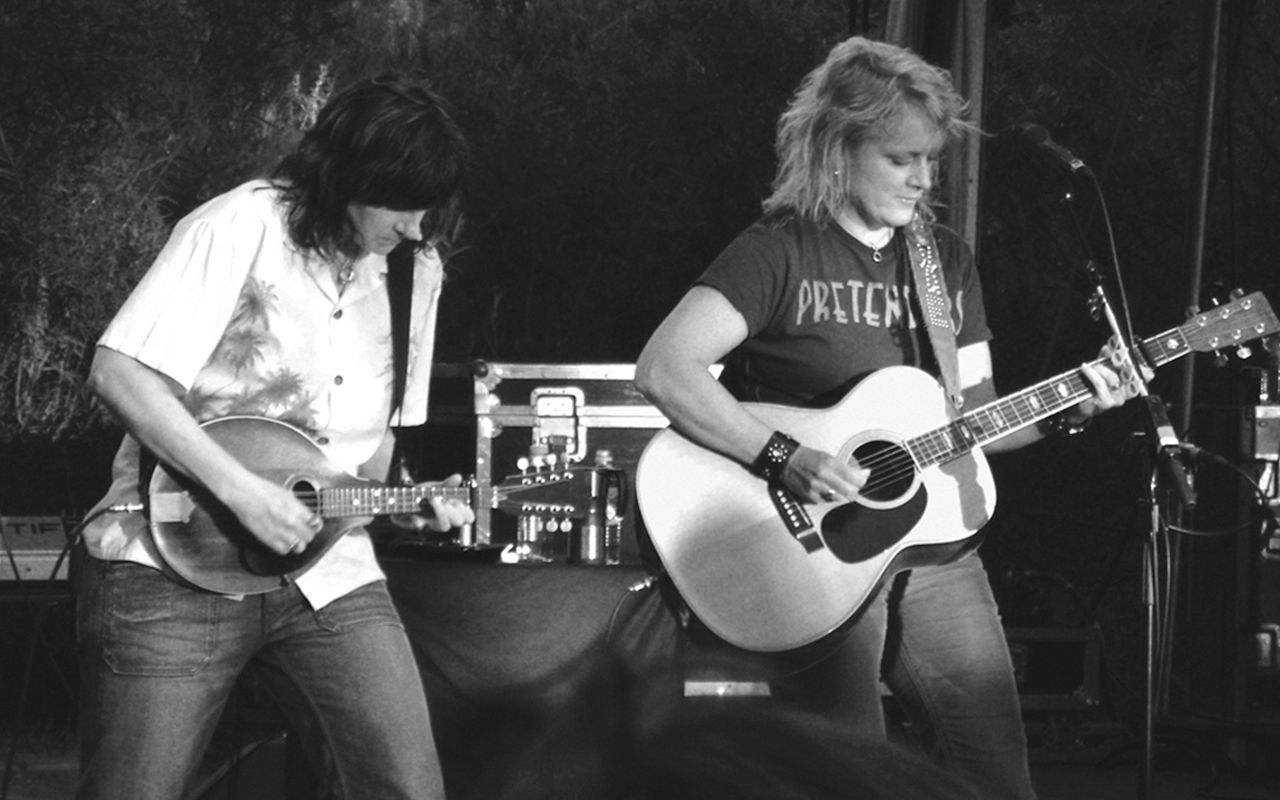 The Indigo Girls may be a lesbian relic of the 1980s and 1990s, but this Atlanta-based folk-rock duo is still hip to the times. After canceling tour dates to promote their new album, “Look Long” (out April 24), Amy Ray and Emily Saliers followed in the footsteps of Yungblud by deciding to live-stream their concert for fans via Facebook. The show will take place on Thursday, March 19, at 6:00 PM EST. “People are feeling scared, isolated, uncertain, and unmoored,” Saliers said in an interview with Rolling Stone. “For the public good, we all have to do our part not to gather in person, but we can still play music.”

With videos, pictures, and text from over 2,500 museums and galleries, Google Arts & Culture gives anyone with an internet connection the opportunity to explore the world’s most beloved institutions for art and history. For queer offerings, check out places like San Francisco’s GLBT Historical Society and NYC’s LGBT Community Center. There’s a host of online exhibits, too, like “Sydney Gay and Lesbian Mardi Gras,” which explores one of Australia’s largest queer gatherings through photographs and flyers; you can even take a virtual tour of Virginia Woolf’s life in London. The world’s most exceptional art is within reach, even when stuck in A Room of One’s Own.

11. Sing along with the staff at Marie’s Crisis in NYC

New York’s iconic piano bar for musical theater nerds is closing its doors, but pianist Franca Vercelloni played her shift live on both Facebook and Instagram yesterday. Vercolloni will be offering digital piano parties via Zoom, so you and your bosom buddies can sing everything from Sondheim to Schwartz from the safety of your apartment. Think about it: you, belting “Home” from “The Wiz” while sipping on all that whiskey you stress-purchased last week. Crisis averted.

12. Have a remote movie night with friends on Zoom

Bar closures and quarantines don’t have to put the kibosh on Drag Race viewing parties with your best buds. Zoom, a platform for video and audience conferencing, allows groups of people to meet up on mobile devices, desktops, and telephones; it’s also a great way to host a remote movie night with friends. All you have to do is create a conference call, use the app’s “Share Screen” function, and stream a movie online for everyone to watch together in real-time. Once the program is over, turn on Lady Gaga’s new single, Stupid Love, and get freaky by donning your highest cha-cha heels and dancing together till dawn via video. Nothing cures quarantine blues like booty bouncing to sugar-pop bliss at an extremely safe social distance.

NewsNetflix Party Extension Allows You Watch and Chat With Friends While You’re Stuck at Home
Tagged
Events LGBTQ Travel
What did you think of this story?
Meh
Good
Awesome