I’m not a Phoenix homer. I understand Phoenix is hot and sprawling, and while it definitely has its charms, it might not be everyone’s cup of tea. I don’t live there or visit the city much, nor do I have friends at the airport I’m trying to help out. I do, however, fly a lot — about 200,000 miles a year — and I have layovers in Phoenix pretty regularly. I can safely say that in addition to golf and desert landscaping, there’s one thing Phoenix does better than anyplace else in the country, and that’s airport food.

I’ve been to One Flew South in Atlanta and Deep Blue at JFK, Whitetail at DFW and Tortas Frontera at O’Hare. All great. But one great restaurant does not necessarily make for a great food airport. What makes for a great food airport, in my mind, is showcasing what the city does best in a convenient, accessible way so that pretty much anyone traveling through can see the best of your city’s food scene.

Phoenix does that better than anyone, and it’s not even close. And it’s not just because it has a recording of Phoenix City Councilwoman Vania Guevara calling it “America’s Tastiest Airport” playing on a loop, either. Yeah, that not-so-subliminal advertising probably works. But it’s the rare baseless brag that’s completely true. And here’s why.

1. There are plenty of local restaurants. 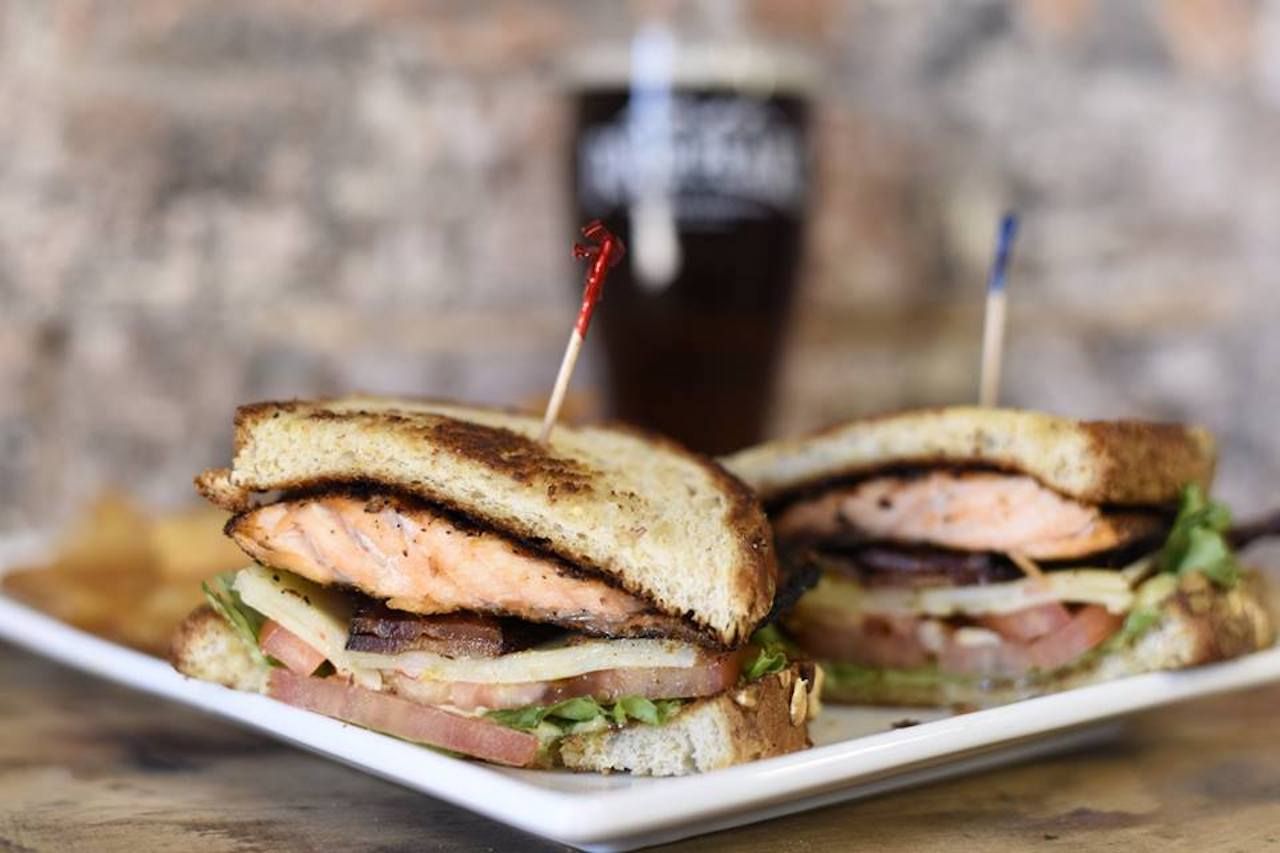 Phoenix Sky Harbor fits more local restaurants into a small space than anywhere else. While airports around America are making an effort to include local restaurants, you can literally eat your way around Phoenix without leaving Terminal 4. No fewer than 26 restaurants sit in that terminal — post security — ranging from authentic Mexican to brasserie to local ice cream shops.

“I think it’s because Phoenix has such a great diversity in its food scene,” Sky Harbor’s public information manager Heather Lissner told me when I called to ask why Phoenix did food better than other airports. “We’re able to take a lot of that and put it in our airport to show people how fantastic it is.”

Sky Harbor doesn’t just put a few fast-casual joints in the terminal and call it “going local.” The airport really offers a taste of the city, with iconic spots and local gems sharing the same sets of gates. Perhaps the city’s most iconic restaurant, Matt’s Big Breakfast, has a location at the airport where you can get the breakfasts made famous on Diners, Drive-Ins, and Dives at all hours. 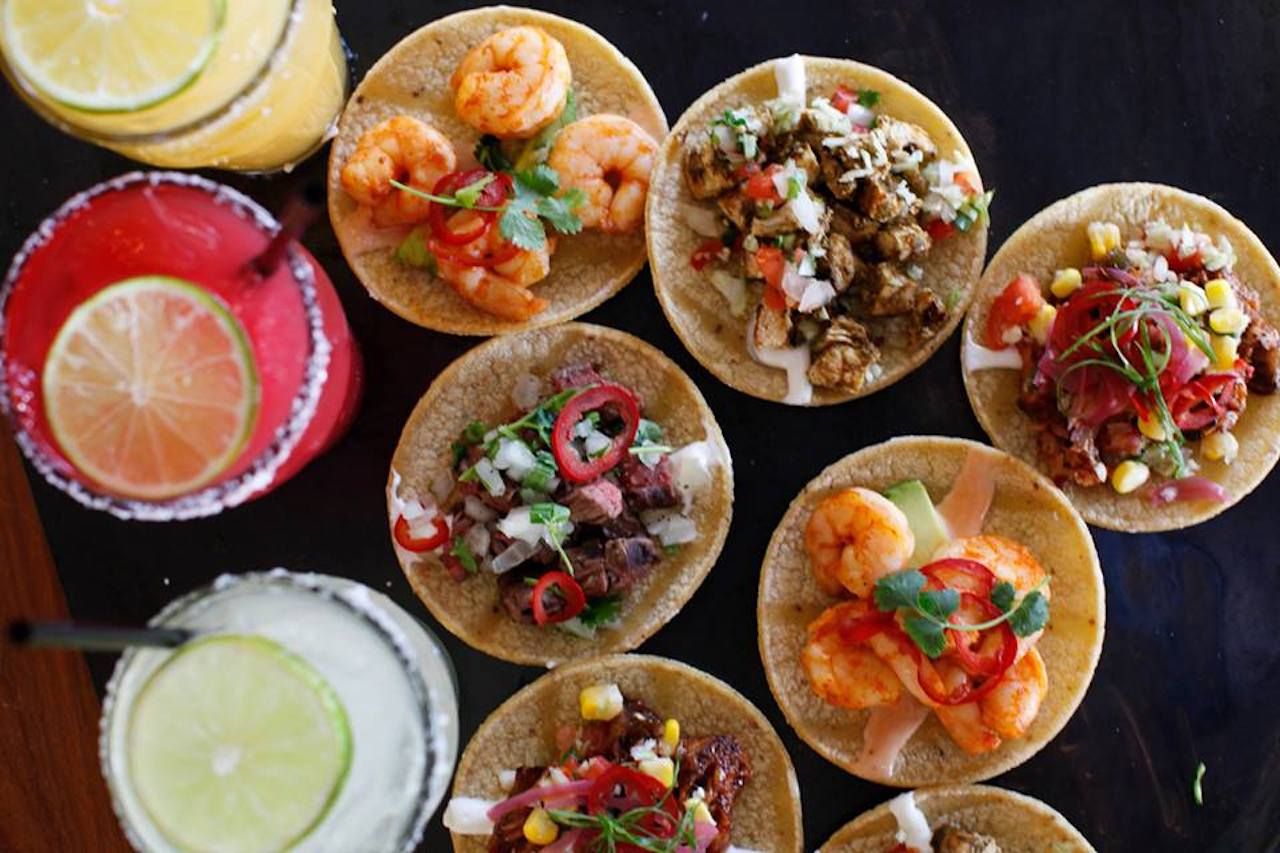 Mexican food and tequila are in abundance. One of the city’s most beloved Mexican restaurants, Silvana Salcido’s Barrio Café, has a full-service location here. For quicker food and tequila cocktails, you can hit Blanco’s Taco and Tequila for burritos with caramelized onions and fresh cilantro rice. Or Sir Veza’s tacos. Or Los Taquitos. You’ve got options. If you want authentic Southwest Mexican food and are only in Phoenix to change planes, it’s easier than getting Wendy’s. 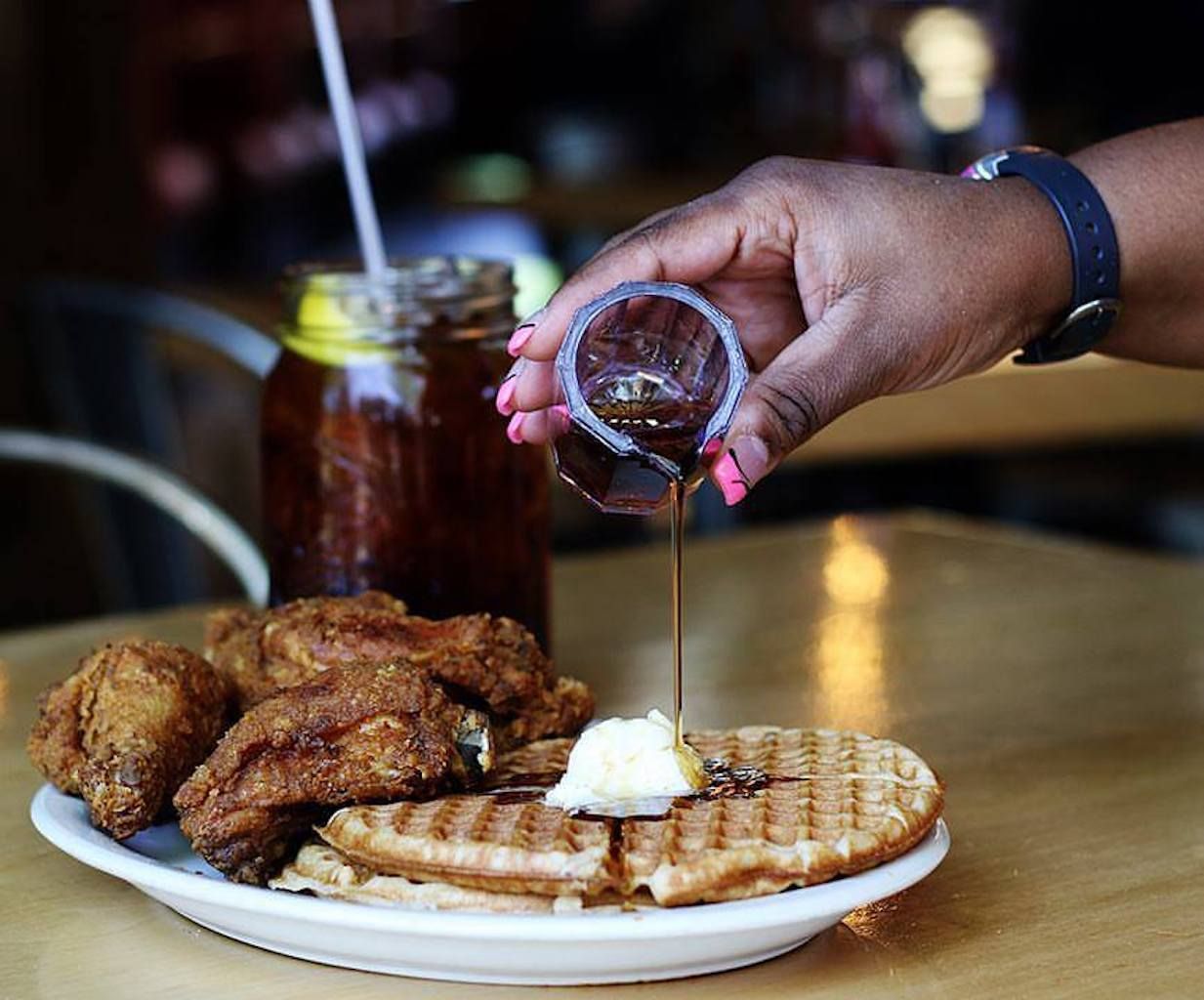 There’s even a local brewery, Four Peaks Brewing Co., with a taproom in Terminal 4, so you can try a local beer on your layover instead of sticking with something familiar. There’s another local brewery, O.H.S.O, located pre-security. Also pre-security, you can find Lolo’s Chicken and Waffles and Joe’s Real Barbecue, both of which show a side of Phoenix cuisine that doesn’t usually get discussed.

The most notable pre-TSA spot you’ll find is Chelsea’s Kitchen, a massively popular local restaurant that serves everything from green chilli burgers to jidori chicken to ahi tuna tacos. Lissner told me that locals often drive to the airport to eat at this Chelsea’s because it’s easier to get a table. 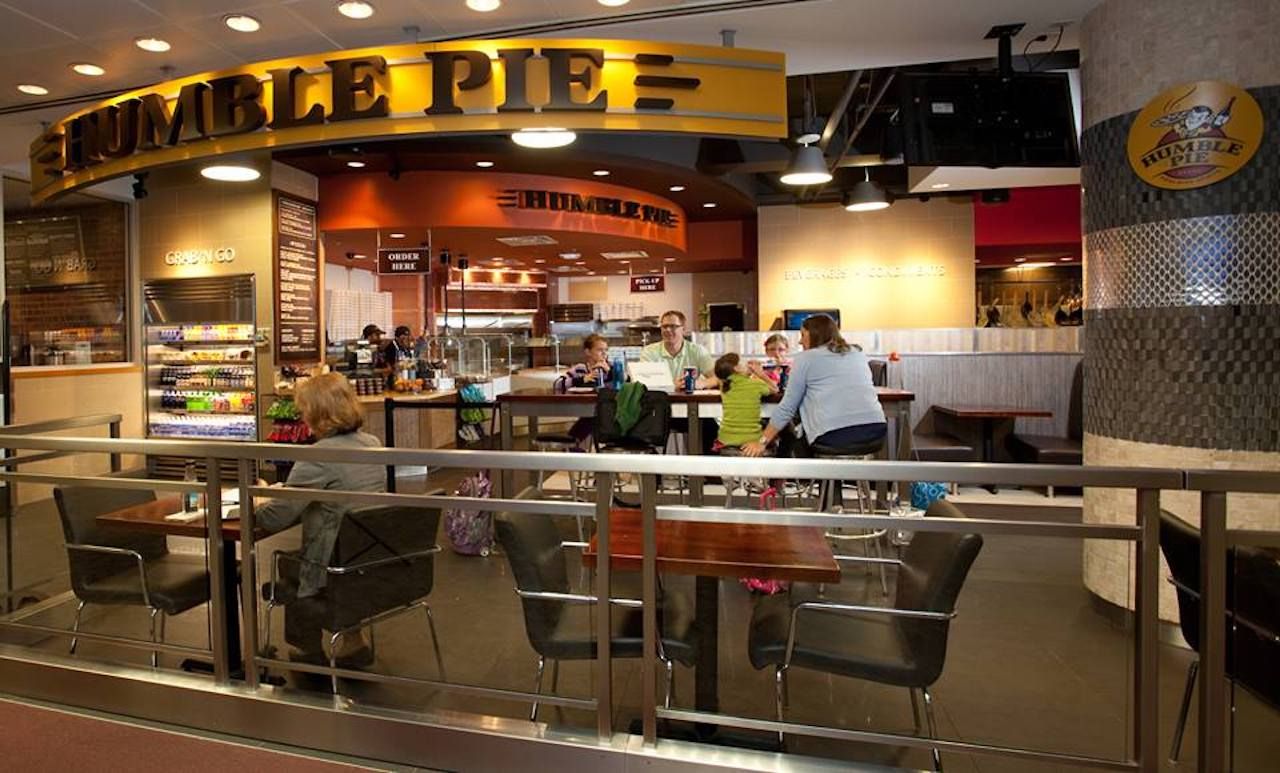 The words “reasonable prices” and “airport food” really shouldn’t be in the same sentence in the era of $4 bags of Cheetos. But Sky Harbor’s prices are, according to Lissner, only a 10 percent markup from what you’d pay on the street. So, where two slices and a soda from Pizza Villa might run you $14 in the food court at MIA, you can get that same two-slice-and-a-soda combo at NYPD Pizza in Sky Harbor’s Terminal 4 for only $8. That might be the best lunch deal at any airport in America.

It’s not just pizza that’s reasonably priced. The burrito with caramelized onions and braised meat at Blanco’s is $10, and it’s big enough to be two meals. Ditto for the burgers at Modern Burger. Though the sandwiches at Wildflower Bread Company aren’t quite as robust, they’re also not all that expensive. I’ve had lunch there with chips and a drink (and a cookie if I’m particularly hungry) and never dropped more than $16. Oh, and they’re open 24 hours, too. 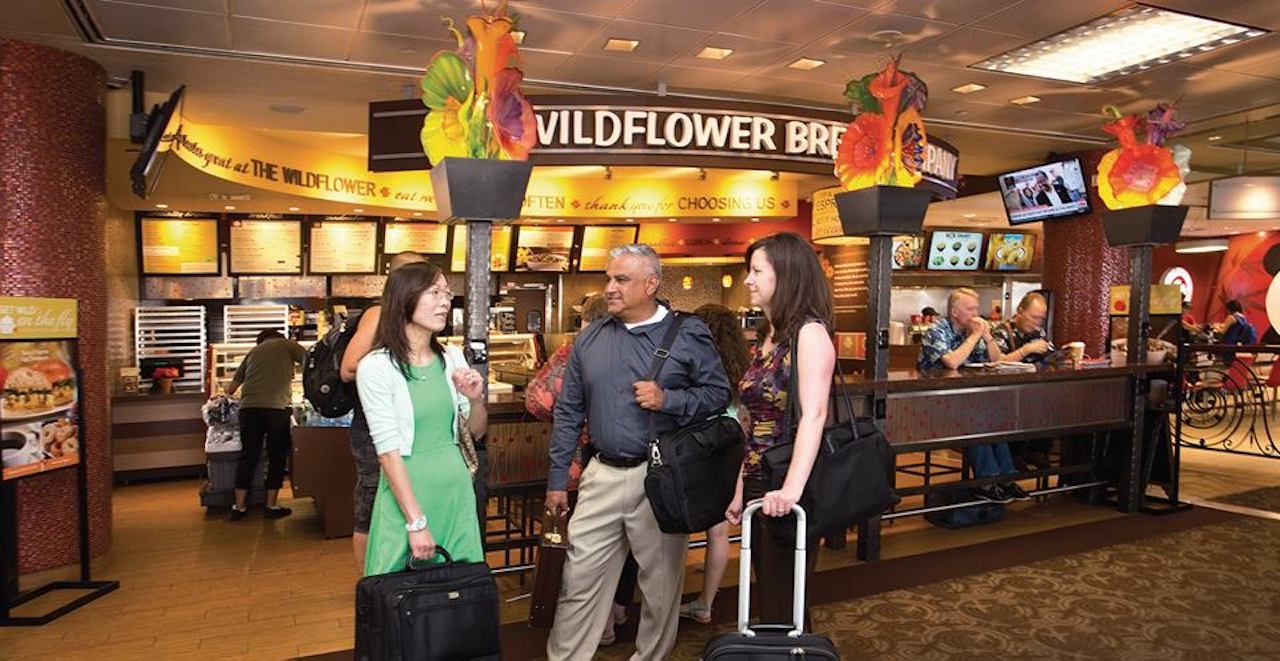 This is where Sky Harbor outshines the airports in which award-winning chefs set up outposts with $50 entrees. While Phoenix might not have the star power of Kevin Rathbun’s Whitetail or Todd English’s Bonfire at JFK, it offers up food that pretty much anyone who can pay for a plane ticket can afford. This allows Phoenix to showcase its food scene to everyone, not just the people who can afford fine dining.

3. You can eat great food even on a short layover. 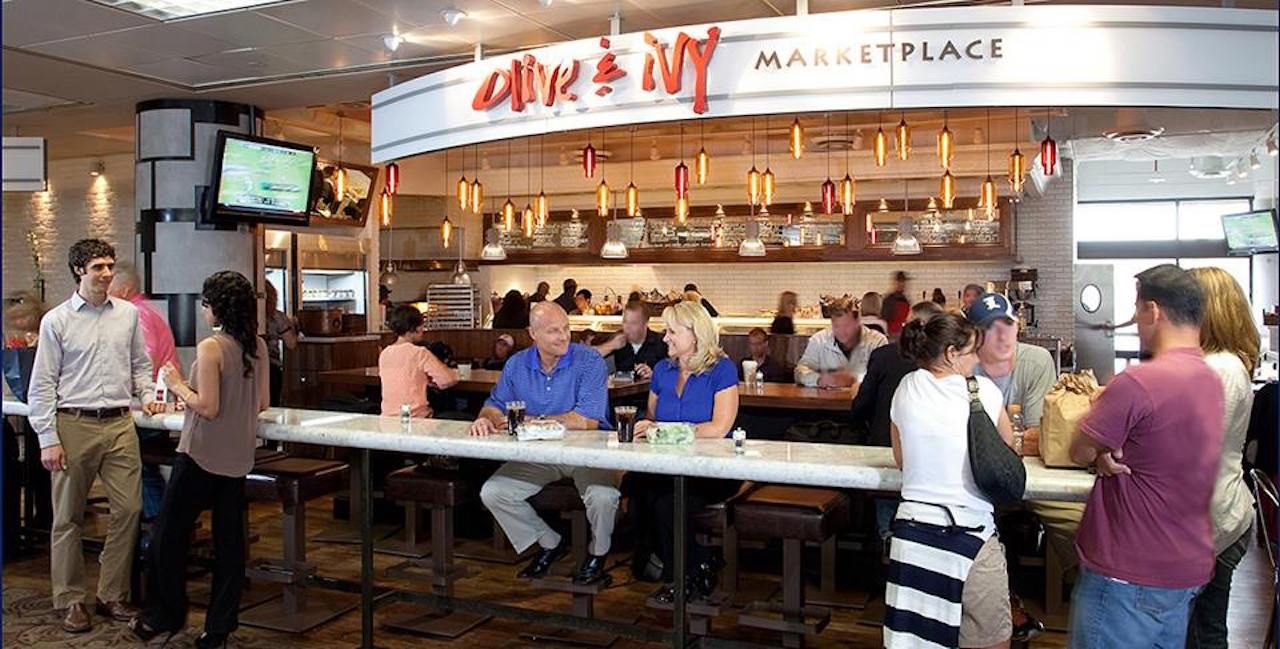 Again, the problem with spots like One Flew South or Whitetail is that you need some time to eat there. The service at those restaurants may be designed for people with planes to catch, but if you’ve only got 50 minutes to make your connection to Fresno, you’re not realistically eating there.

At Sky Harbor, the fast-casual offerings are numerous, most of which can be ordered and devoured with enough time to calmly walk to your gate. Terminal 4’s quick bites include pitas at Pita Jungle, burgers at Delux Burger and Modern Burger, fresh sandwiches and salads at Wildflower, and tacos at any of the aforementioned Mexican spots. If you’re traveling in a group, everyone can split off and get what they want without having to wander too far. Sky Harbor is really more like a food hall with airplanes than it is like an airport.

4. Good food is easy to find and get to. 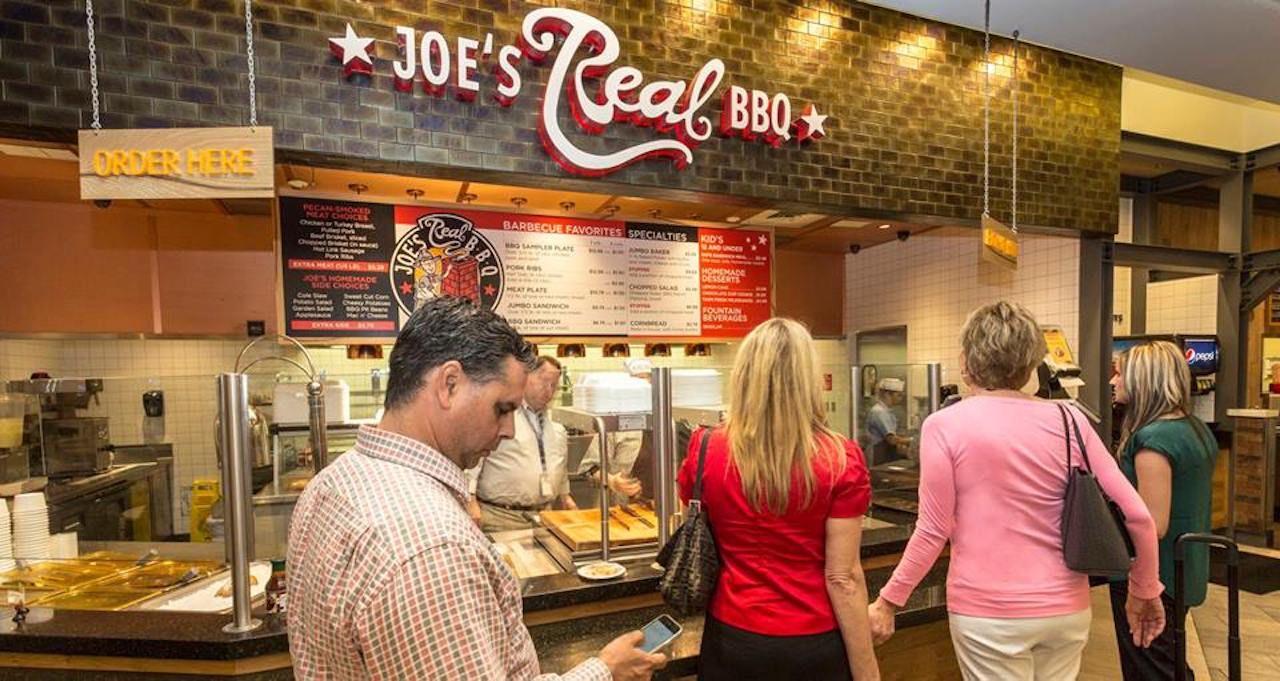 With that abundance of food, you never have to walk more than a few gates to find something great. At many airports, you have to slog through franchise after franchise to find a local gem. In Phoenix, the restaurants are in one of three concourses in Terminal 4 — and all have front-facing counters or host stands, so you’re never going upstairs or behind a nondescript door to find them. While that kind of thing might be cool for a Friday date night, most people at an airport don’t have time to search for a place.

Thanks to that combination of great food, value, and accessibility, I actually look forward to layovers at Sky Harbor now. When I hear the pilot announce the final descent, my mouth starts to water thinking about the fresh guacamole I’m going to get at Barrio Café or the sweet, rich ice cream at Sweet Republic. I’ve only left the airport and ventured into Phoenix proper three times in my life, but I feel like I know the food scene here better than some cities I’ve been to far more often. As a frequent flier and consumer of airport food, I can say with confidence that Phoenix showcases its food better than any other city’s airport. And you don’t even have to leave the air conditioning to try it.