It’s been a whacky couple of months. March went in like a lion and out like a Stranger Things Demogorgon, and although April still feels like we’re living in the middle of a dystopian novel, LGBTQuarantine has spawned something worth celebrating — international solidarity.

Whether it’s online Pride celebrations replacing canceled parades, the Lady Gaga stan who typed out the forthcoming Chromatica tracklist for the rest of us to enjoy, or the crowds of queer folks figuring out how to get laid in isolation, the coronavirus pandemic is bringing the LGBTQ community together in exciting new ways.

Here are 10 signs of queer solidarity from this past month that will make you smile.

In 1985, San Francisco native Cleve Jones gave birth to an idea that eventually became the AIDS Memorial Quilt — a visual celebration of those who lost their lives to AIDS. But Jones couldn’t sew and needed a capable tailor to make his idea a reality. That’s where Gert McMullin comes in. McMullin began sewing pieces for the quilt in 1987; she has since made around 130 panels and helped thousands of people construct their own. Today, the Memorial Quilt commemorates more than 105,000 individuals in over 50,000 three-by-six-foot quilt panels.

In April, the quilt was supposed to be displayed at San Francisco’s National AIDS Memorial after spending the past 18 years in Atlanta under the stewardship of the NAMES Project. While the coronavirus pandemic postponed those plans, it propelled McMullin into action.

McMullin, who has already sewn her way through one pandemic, began using leftover fabric from the AIDS Memorial Quilt to sew hundreds of masks for another. The recipients are essential workers and members of Bay Area Community Services, a nonprofit that serves locals with health and housing-related assistance.

“The fabric we were going to use for people who died is now going to be used for people, hopefully, to live,” McMullin told reporters at ABC News.

2. A gay nurse from Kansas relocated to NYC to help victims of the coronavirus.

When New York City became the epicenter of the coronavirus pandemic in the US, Dan Renzi, a gay nurse from Kansas, relocated to help fight the outbreak. In a recent Instagram video, Renzi said, “If you told me that not too many years after I graduated that I’d be living in a hotel in New York while I was putting bodies in body bags because this mysterious fire was mowing down everybody’s grandparents … how do you process that?”

In April, Rachel Maddow praised his bravery on MSNBC before mentioning the “7:00 PM Clap” in New York — a jubilant citywide cheer honoring healthcare workers like Renzi. Most people around the world don’t get to see the impact their support has on healthcare workers, so she cut to a clip of Renzi processing the heartfelt applause in real-time. The video is an emotional celebration of our iron-willed community leaders and the queer people leading the charge.

3. A gay couple in Poland is fighting discrimination and disease with rainbow face masks. 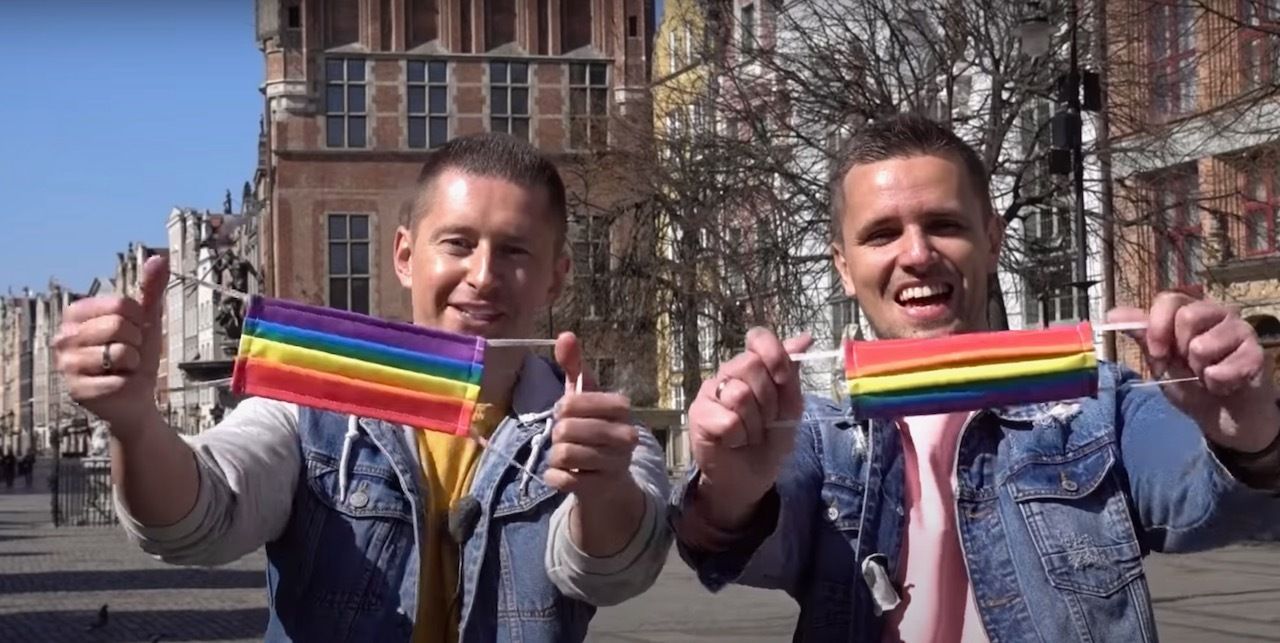 Living out and proud as an LGBTQ resident of Poland hasn’t been easy in recent years. The country’s ruling conservative party, which has been in power since 2015, opposes legal recognition for LGBTQ couples and same-sex adoptions. This past year, one-third of Polish municipalities declared themselves “LGBTQ-free zones,” promoting widespread discrimination against queer individuals.

“Many Polish people call us a plague,” Jakub Kwieciński, who lives in Poland with his husband, Dawid Mycek, recently told the Star Observer, “so we thought if we help people overcome real plague, they might change their mind.”

The Polish couple took to the streets in Gdańsk, Gdynia, and Sopot to give hundreds of citizens free face masks in the fight against COVID-19 infections, but with a queer twist — each mask was designed like a mini Pride flag.

The couple posted a video chronicling their noble public service on YouTube. It has since gone viral, proving that an infectious disease like discrimination stands no chance in the face of a guerrilla kindness campaign.

4. Virginia became the first state in the South to pass anti-discrimination laws.

On April 11, Governor Ralph Northam signed the Virginia Values Act, making Virginia the first state in the US South to pass anti-discrimination protections for the LGBTQ community. The law, which prohibits housing and employment discrimination based on sexual orientation and gender identity, will go into effect on July 1, 2020.

This new law isn’t Northam’s only considerable contribution to the queer community. In March, Northam signed bills outlawing conversion therapy for minors and requiring the Virginia Department of Motor Vehicles to offer a nonbinary option on drivers’ licenses.

Although Virginia is the 21st state in the US to pass an anti-discrimination law for queer constituents, it’s a tipping point for the largely conservative South and a hopeful sign of favorable change yet to come.

5. LGBTQ nightlife is taking to the net. 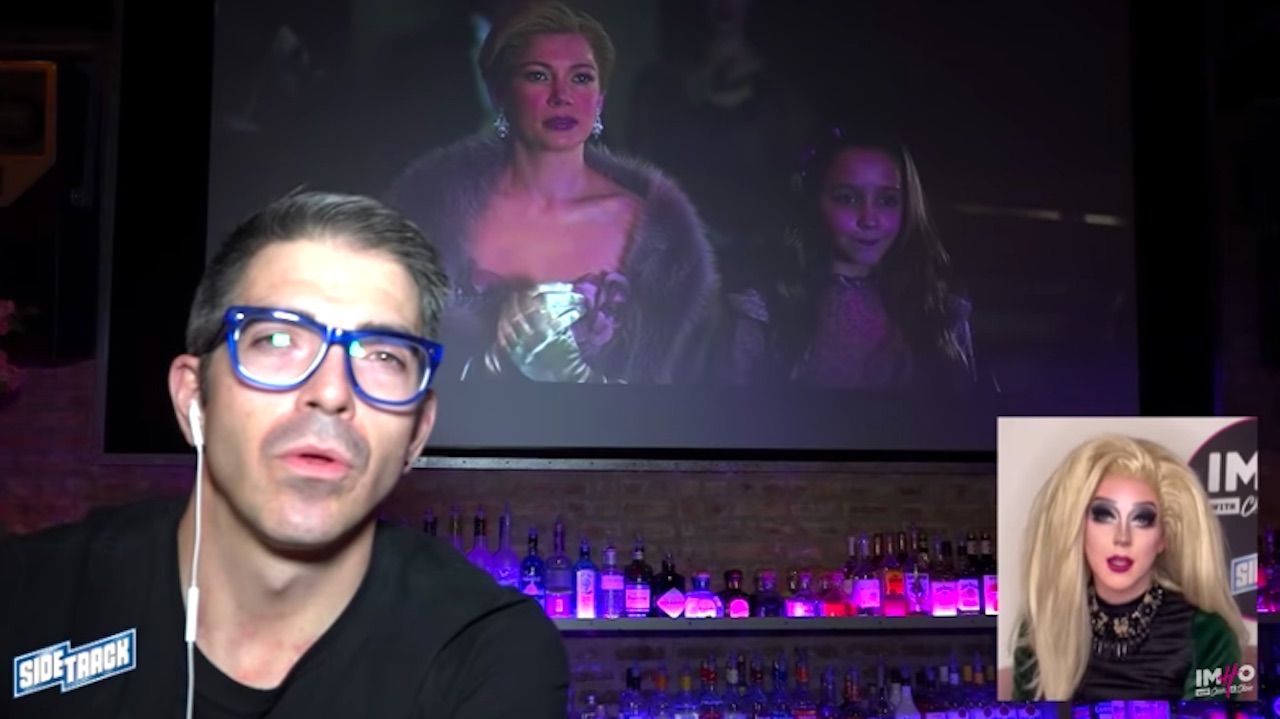 Gay bars around the world might be closed, but the internet is open for business, and queer nightlife lovers are making the most of it. A group of friends shacking up together in Westminster transformed their house into G-A-Y, their favorite queer club, to parody the pre-pandemic glory days. You can watch it on Twitter. In place of their weekly RuPaul’s Drag Race viewing party, Chicago’s Sidetrack bar is producing a series of YouTube videos where local queens review each episode. NYC’s favorite piano bar, Marie’s Crisis, is hosting musical theater sing-a-longs from a livestream via Facebook. The Balcony Club in Boise, Idaho, offers virtual yoga classes, burlesque shows, makeup competitions, and drag queen storytime for kids. For those looking for something a little more salacious, go-go boys from Club Cobra in Los Angeles now offer virtual lap dances via Only Fans. Who knew it was possible to stay home and still have a full social calendar?

6. Gay men’s choirs around the US are making heartwarming group videos. 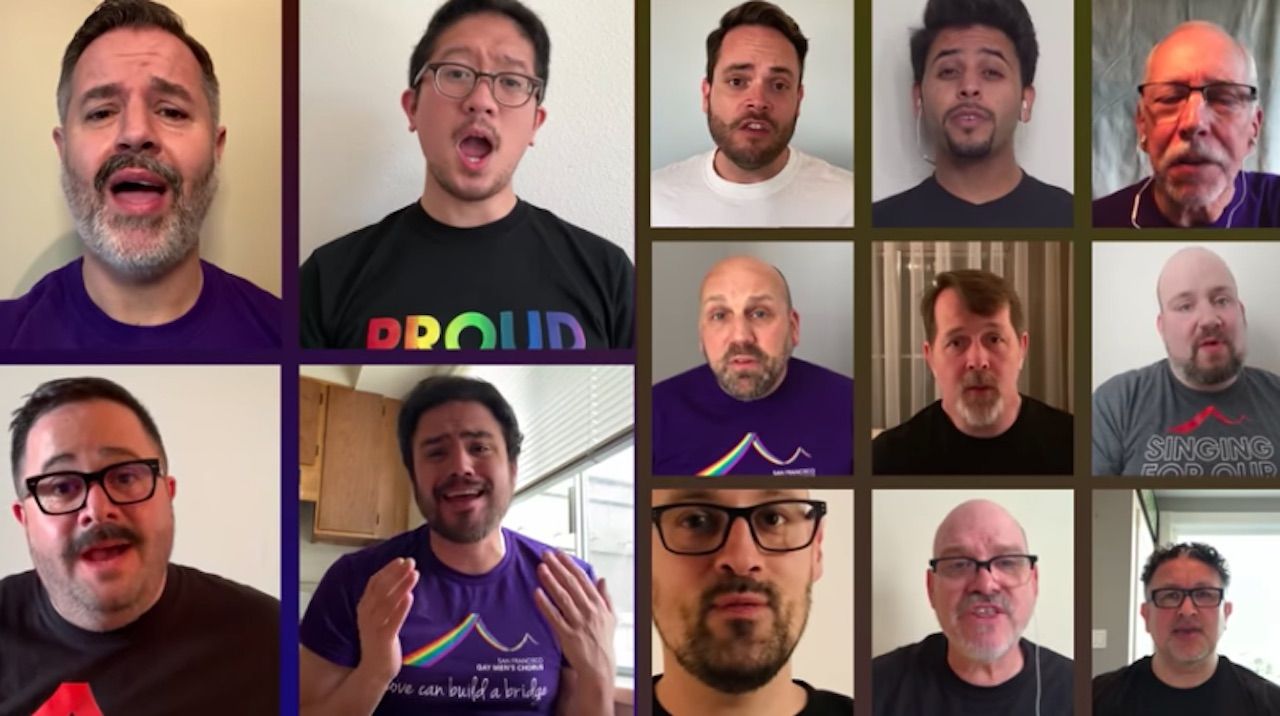 The San Francisco Gay Men’s Chorus recently honored health care workers and first responders with a mash-up of “True Colors” and “Brave” by Cyndi Lauper and Sara Bareilles. “You are our heroes” appears in typeface right before a diverse cross-section of San Francisco’s queer community starts blending in perfect harmony, which is basically your cue to start the waterworks at home. The video features a 150-person ensemble singing together virtually and is edited to look like an extended gay family reunion of the Brady Bunch.

If you’re digging the dulcet tones, check out the Boston Gay Men’s Chorus next. The choir, which canceled a concert for the first time in 38 years last month, released a song dedicated to those impacted by the pandemic. The video is a compilation of self-tapes made by choir members isolated throughout New England.

Indya Moore, the nonbinary actress who stars in the FX television series Pose, promoted a campaign on their Instagram to raise money for trans and queer individuals in need of pandemic-related financial assistance. Moore raised over $20,000 through CashApp and has since distributed about $50 each to nearly 400 individuals. They’re also currently working with FX on a campaign called #FeedTheLove, which is raising awareness for families who don’t have access to nutritious food due to the pandemic. Moore, who survived a tumultuous childhood in the South Bronx and is now enjoying the glamorous side of a Cinderella story, knows a thing or two about hardship. Their willingness to use fame as a means of social advocacy is a lesson by which queer community could learn a thing or two.

8. Stonewall Gives Back! raised over $19,000 for the LGBTQ nightlife industry. 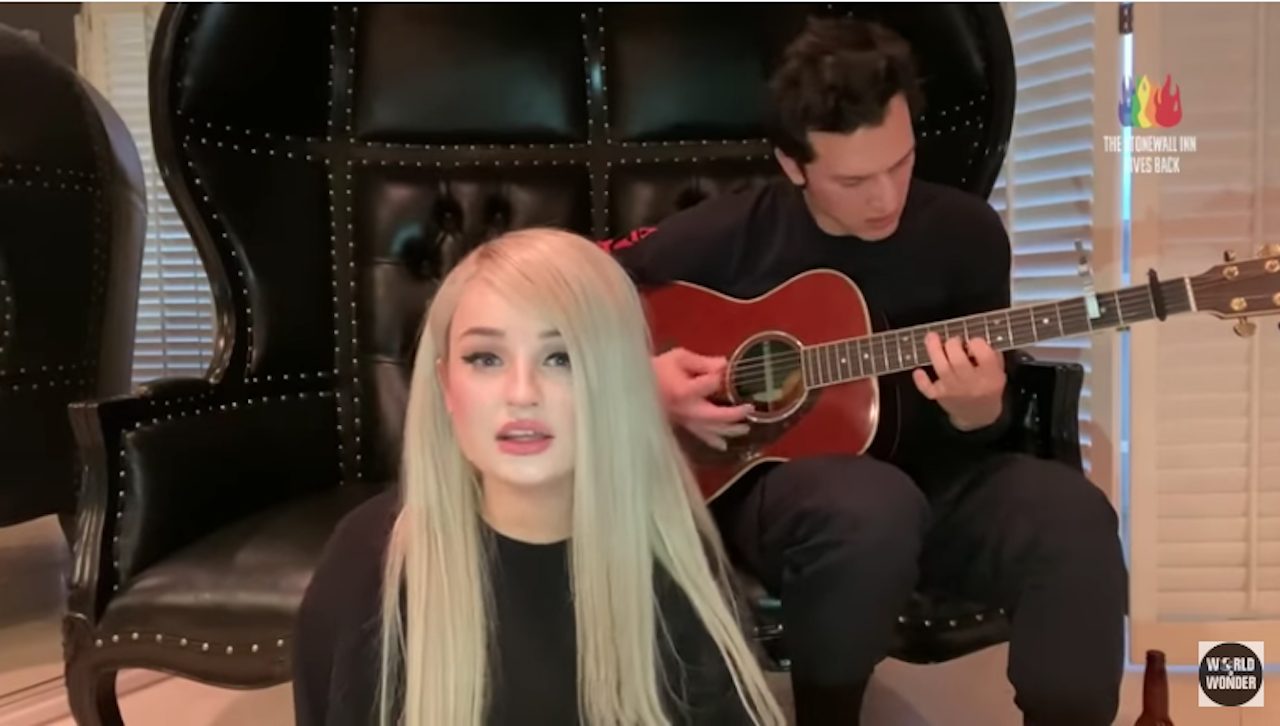 Members of the LGBTQ nightlife industry have faced widespread unemployment due to the coronavirus pandemic, with many businesses wondering what their future holds. On April 23, World of Wonder Productions and The Stonewall Gives Back Initiative teamed up for a concert to raise money for those financially impacted. They will distribute the earnings as $1,000 grants to people who qualify. (If you’re an LGBTQ nightlife worker, you can apply for money by clicking here.)

9. You aren’t the only one screwing up your at-home haircut. 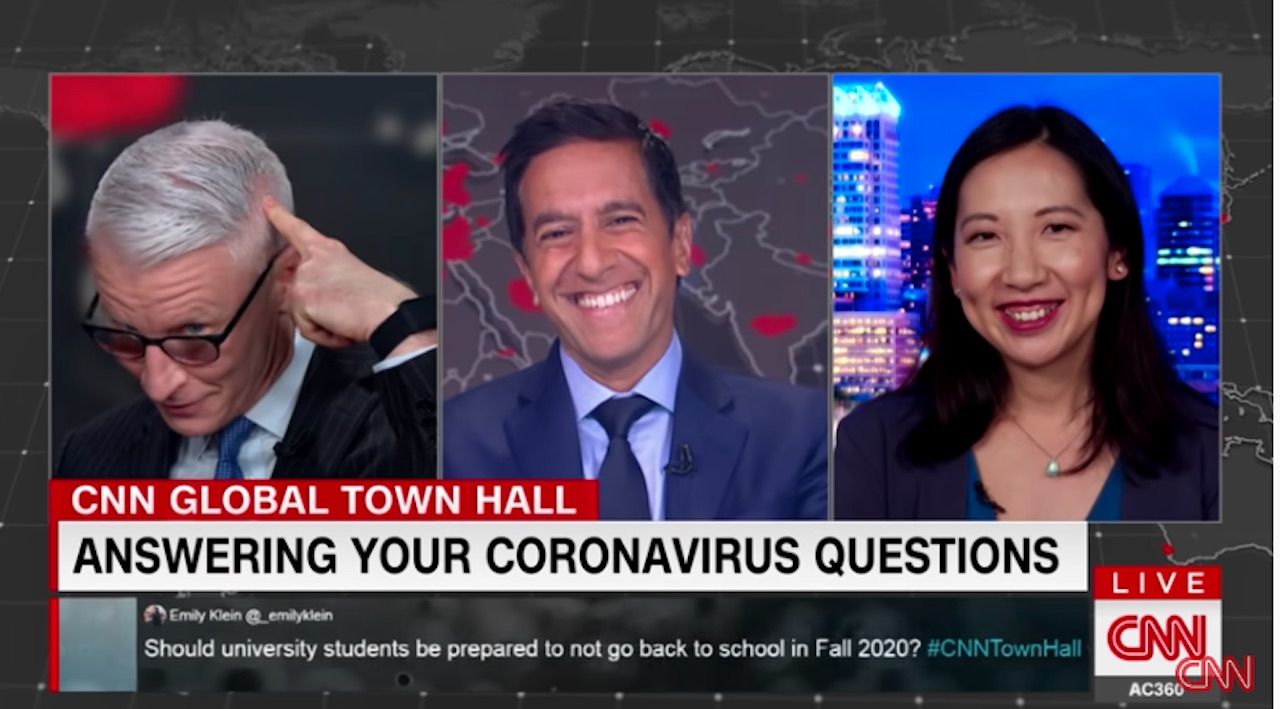 It’s time to step away from the scissors and cut yourself some slack for your quarantine hairdo. When Jimmy Fallon asked professional hairdresser and queer icon Jonathan Van Ness for solo haircutting tips in isolation, Van Ness responded, “Just don’t do it.” Take his advice. Still, that doesn’t preclude you from enjoying some celebrity haircut schadenfreude. CNN anchor Anderson Cooper gave himself a bald spot, Teen Wolf heartthrob Colton Haynes buzzed himself a rat tail worthy of a Deliverance reboot, and Ricky Martin dyed his hair the color of an inedible red velvet cupcake.

If you already hit up the DIY hair salon, don’t worry — your luscious locks still have plenty of time to grow back before the world takes to the streets again.

10. A double rainbow appeared over the Manhattan skyline .

After a rainy day on April 13, Mother Nature gave NYC a delightfully queer surprise. As New Yorkers finished clapping for essential workers throughout the city, a double rainbow appeared over Manhattan’s steely skyscrapers. The rainbow has become an artistic symbol of hope in recent weeks, appearing in windows around the world as people remain indoors. In light of recent events, it’s exactly what New Yorkers needed to see. The city, an epicenter for the pandemic, has canceled Pride, closed Broadway, and upended nightlife, leaving little for the LGBTQ community to look forward to in the coming months. This was a gentle reminder that after even the worst storm, a rainbow appears.

LGBTQ TravelHang Out With These Nine Queer Icons in Quarantine
Tagged
LGBTQ Travel News
What did you think of this story?
Meh
Good
Awesome