A sprawl of mosques, hammams, bazaars, and neighborhoods lorded over by cats, Istanbul will keep you on your toes. For an altogether different pace, tap on a trip to the Princes’ Islands. Located 13 miles southeast of Istanbul in the Sea of Marmara, Adalar – “the Islands” – was a banishing place for rogue royalty during the Byzantine era. These days, with four of the nine open to tourists, the Princes’ Islands are a popular summer getaway for Istanbulites and a fuss-free option for either a day trip or an overnighter.

Dust off the bustle of Türkiye’s largest city with a scenic crossing chaperoned by screeching seagulls. Whichever island(s) you choose to explore, the first thing you’ll notice is the sound – or, lack of it. The vast majority of motorized vehicles are banned in idyllic Adalar, with the exception of emergency services. A handful of electric golf carts are available, in place of the horse-drawn carriages banned in late 2019.

Once at your chosen destination, you’ll spend your time taking in the nature, viewpoints, and architecture while soaking up the languid shift in tone. Rental bicycles are readily available near all harbors. Realistically, you can get around a maximum of two islands in one full day without needing to rush. 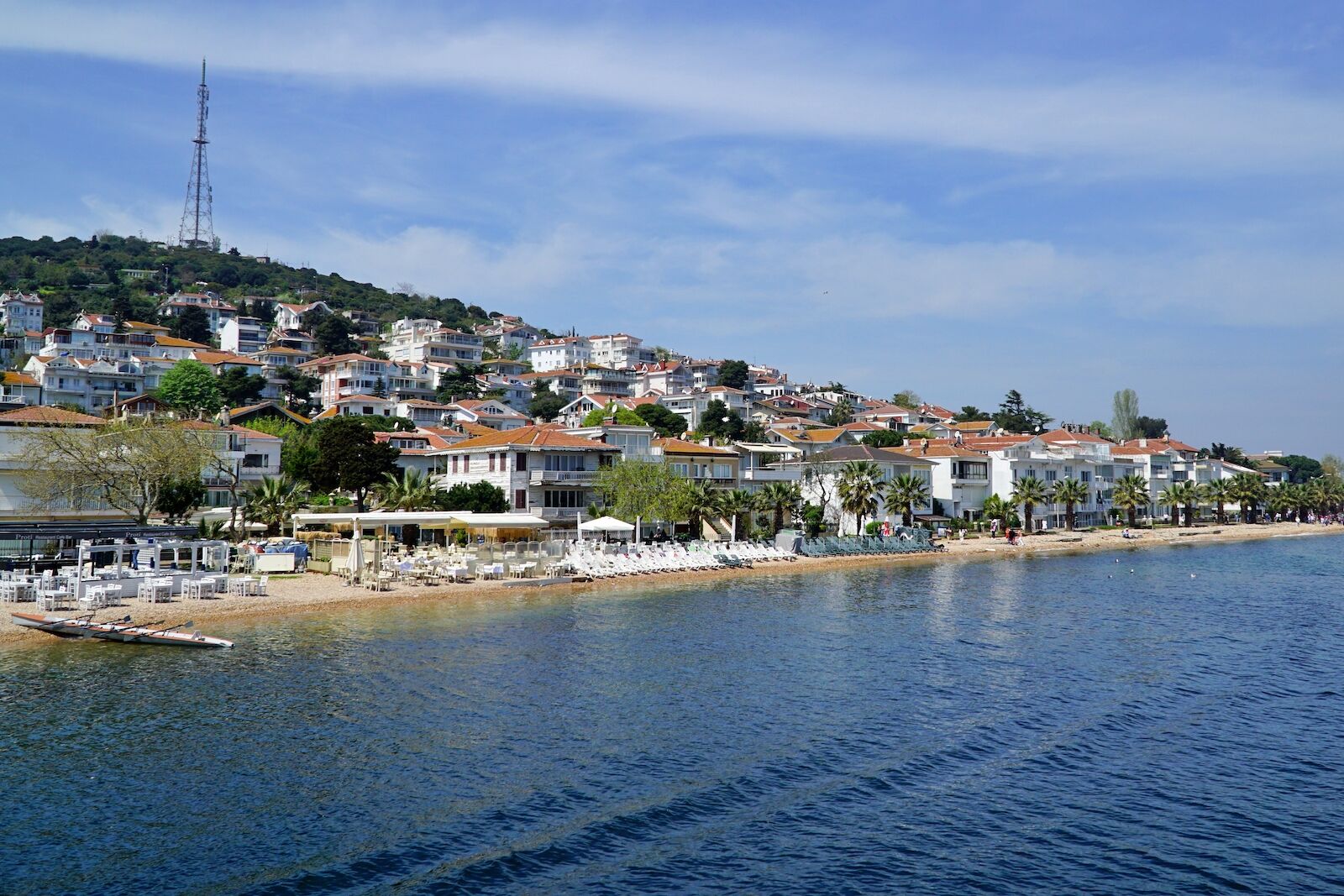 As the closest to Istanbul, Kınalıada is the first island you’ll catch sight of from the ferry. Shaped by the Çınar, Teşrifiye, and Manastır hills, the name is a nod to the ruddy hue of the land caused by past mining. Despite being the smallest of the quartet, Kınalıada is the most densely populated isle. Kınalıada Halk Plajı, a 20-minute walk from the ferry terminal, is the star beach although you’ll appreciate aqua shoes when taking a dip.

While Kınalıada is worthy of a visit if you’re spending a night or two island-hopping, prioritize the others for a day trip. 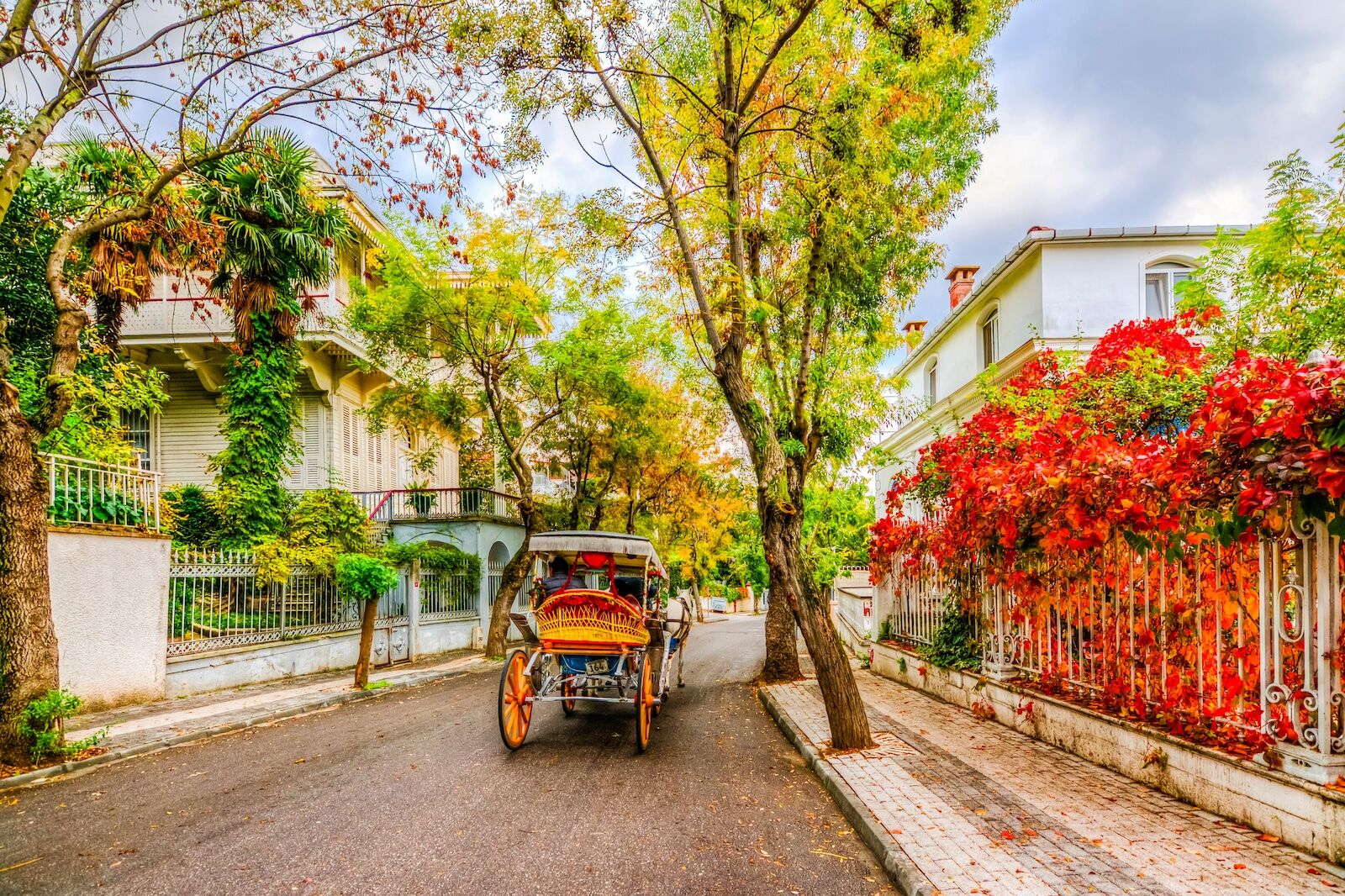 Büyükada receives the lion’s share of Adalar tourism and offers the most in terms of sights. At the time of the late Ottoman Empire, Adalar began to emerge as a hideaway for the elite of Istanbul with elegant wooden mansions restyling the island’s aesthetic. Büyükada showcases the finest of these buildings, particularly on Çankaya Street which is lined with the grandest properties. Upon exile from Russia, Leon Trotsky dwelled in Büyükada from 1929 until 1933. You’ll spy the remains of his house, Troçki Evi, buried beneath the greenery off Nizam Street.

Follow the trail up Yücetepe where you can drink up seascapes from the Hagios Georgios Koudounas and Aya Yorgi churches. Not far from these stands the derelict Greek Orthodox orphanage, Rum Yetimhanesi: the largest wooden building in Europe. If the hilly terrain of Büyükada National Park takes its toll, drop down to one of the halk plajı (public beaches) for a refreshing swim. 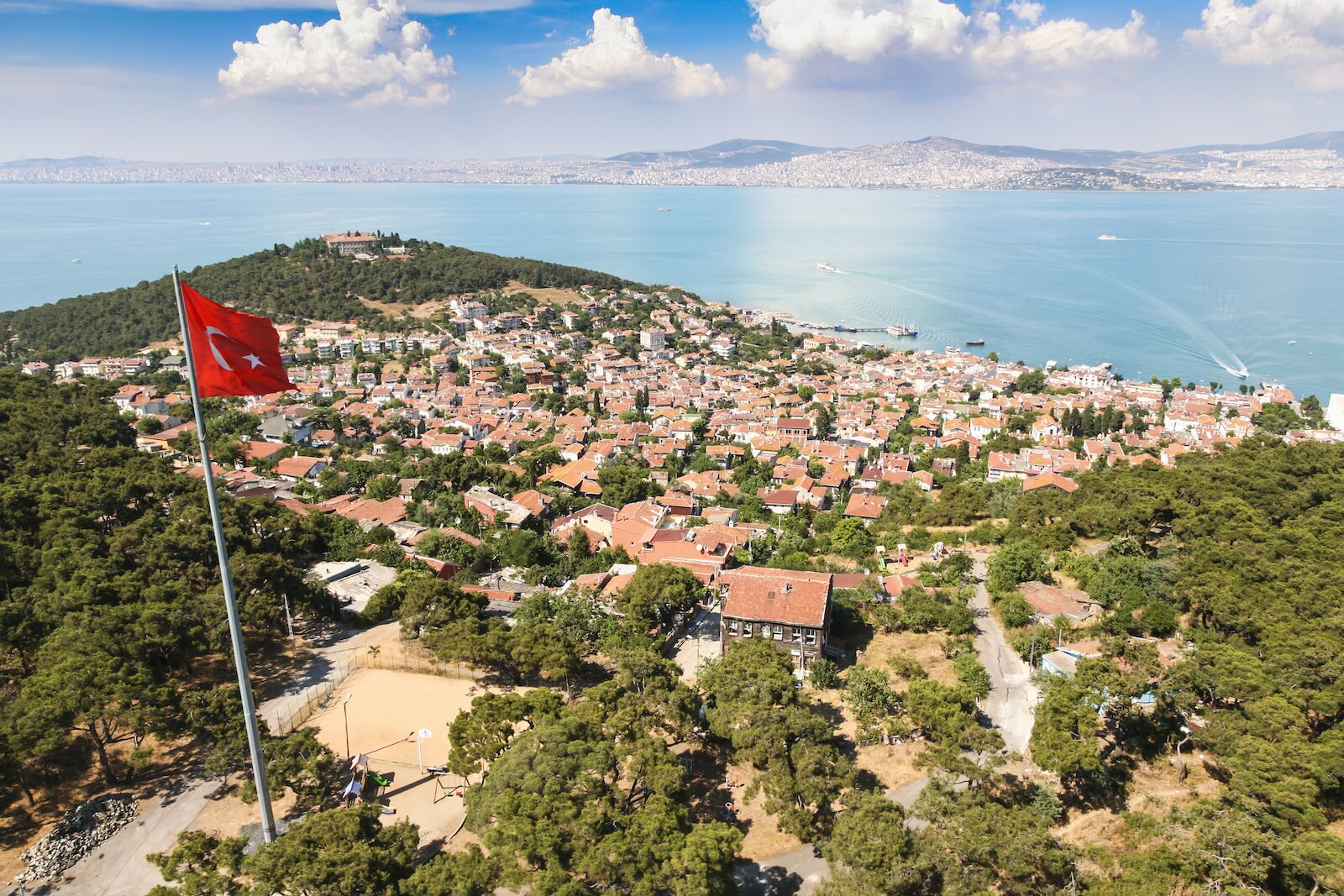 Coated with thick woodland, Heybeliada is the greenest of the bunch. It earned its name for the valley dipping in between two twin hills in the heart of the island while the aromatic scent of pine guides you through the interior hiking trails.

Heybeliada has become a popular alternative to the popular Büyükada, with a similar number of Victorian-era cottages to pore over. Virtually all are private homes, but you can pay a visit to the Inonu House Museum, formerly owned by İsmet İnönü who served Türkiye as both prime minister and president.

Venture down to the southern cliffs for the best views and a peek at the abandoned sanatorium. 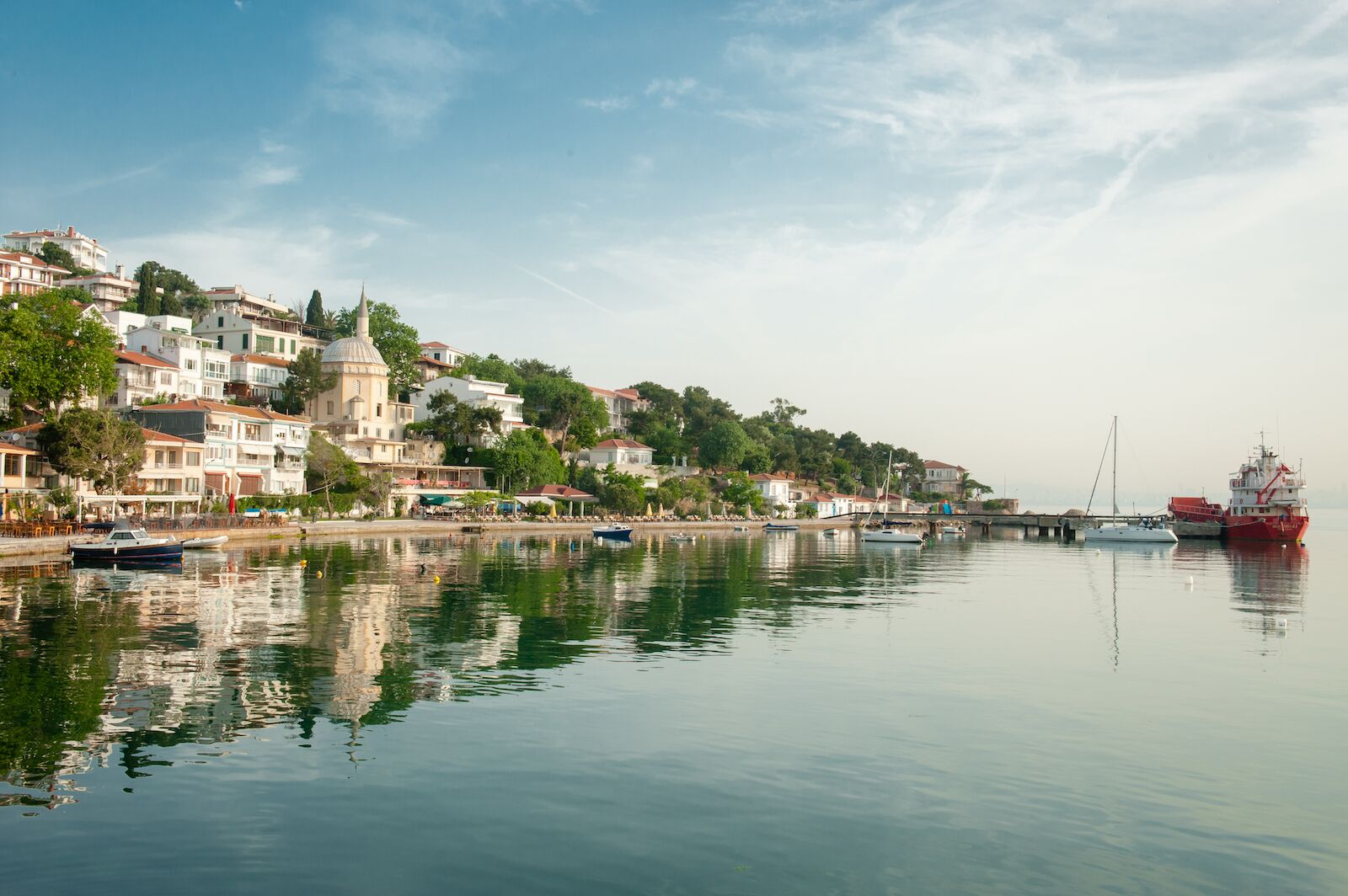 With most travelers jumping ship at Büyükada or Heybeliada, “Burgaz” flies beneath the radar. The center rises to form Bayraktepe (Flag Hill), the summit of which grants a windswept vantage point over the archipelago and the Anatolian shoreline. Pivotal Turkish writer, Sait Faik Abasıyanık, called Burgazada home and sought inspiration from the island. His former residence is now a museum that shines a light on how well-to-do Turkish people lived during the mid-20th century.

Burgazada’s main square around the ferry has a cheerful array of seafood restaurants and cafes overlooking the harbor. The Turkish tea and cake at Burgazada Ergün Pastanesi are alone deserving of hopping off the ferry. With one day in Adalar, you could comfortably split your time across Burgaz and either of the two larger isles.

When to visit Adalar

Much like Istanbul, Adalar works as a year-round destination. July and August bring the hottest temperatures for sunbathing and swimming. However, as Istanbulites pile onto the islands, you’ll find yourself wrestling for a spot. The shoulder season months of April, May, June, September, and October experience agreeable weather minus the summer crowds. With a Mediterranean climate, the Princes’ Islands rarely drop as cold as Istanbul in winter and are spared the typical snowfall.

Getting to the Princes’ Islands

Tours are readily available but it’s easy to visit Adalar independently. Şehir Hatları operates ferries from the European and Asian sides of Istanbul. Boats depart from Eminönü, Beşıktaş, and Kabataş piers on the European side, and Kadıköy, Bostanci, and Kartal on the Anatolian side. Note, vessels reach Büyükada last, with the journey time from Kabataş taking approximately one hour and 45 minutes.

Save money by using your IstanbulKart, a handy purchase if you’re planning to use Istanbul’s comprehensive public transport system. Alternatively, you can purchase a paper ticket at the pier. Ferries are roomy with internal and external seating, restrooms, and a cafe. Always double-check the ferry schedule with the departure screens at each pier before setting out to explore.

Where to stay on the Princes’ Islands 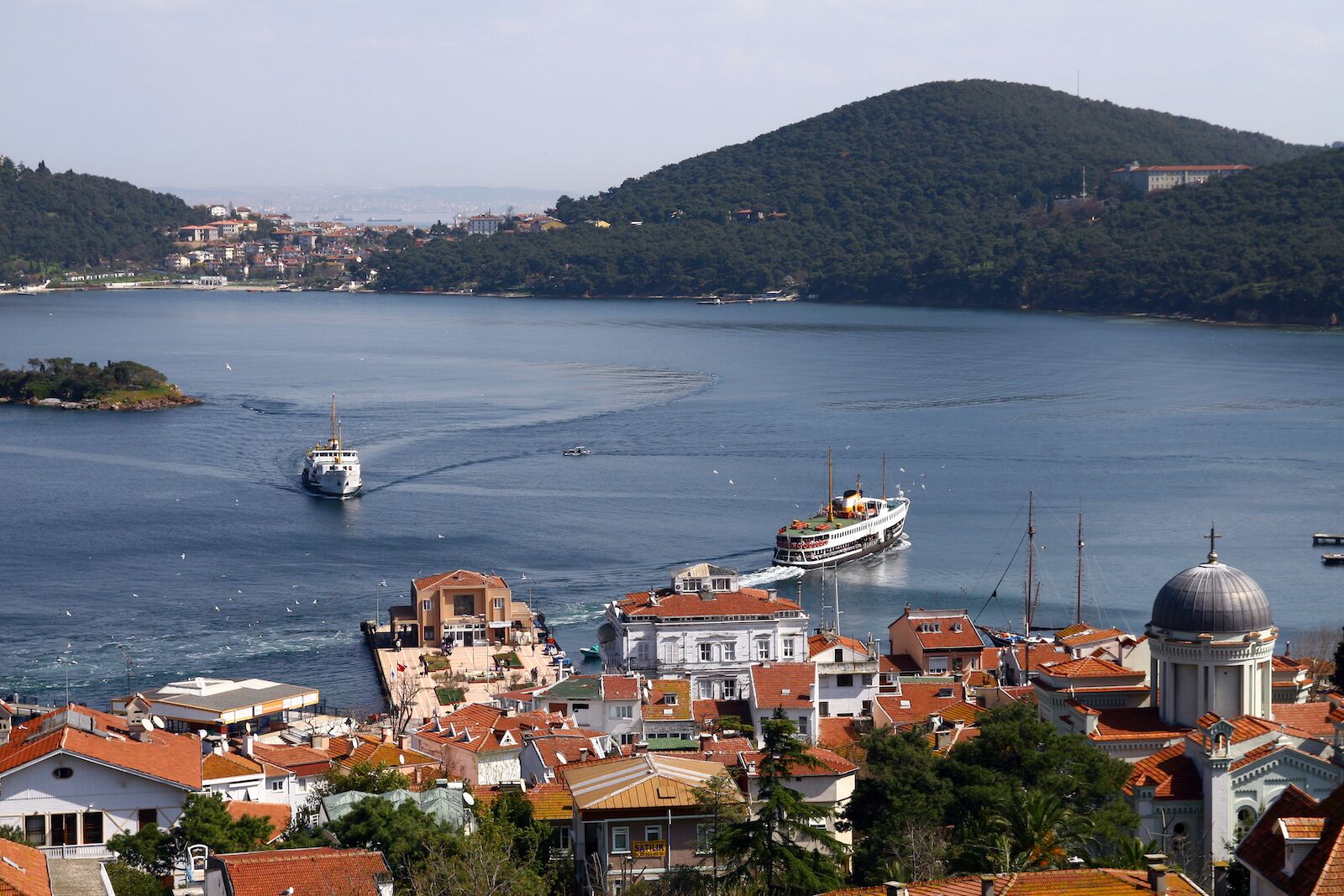 We hope you love the Adelar Islands hotels and Airbnbs we recommend! Just so you know, Matador may collect a small commission from the links on this page if you decide to book a stay. Listed prices are accurate as of the time of publication.

It’s not necessary to stay overnight in the Princes’ Islands but if time permits it’s a unique experience. Rates in Adalar fluctuate as per the season.

Airbnb rentals are widely available on all four islands. Take in a panoramic view of the Asian side skyline from this Büyükada duplex with a terrace. Meanwhile, this two-bedroom cottage with a garden on Heybeliada was originally a hammam. This chic three-bedroom condo on Burgazada is appointed with mod-cons and a lovely terrace overlooking a local tennis court and church.

Coupled with economical ferry and hotel costs and affordable food, a day out to Adalar is light on the wallet. Time your trip back to Istanbul wisely and you’ll catch the sunset from the deck.

Tagged
Beaches and Islands
What did you think of this story?
Meh
Good
Awesome