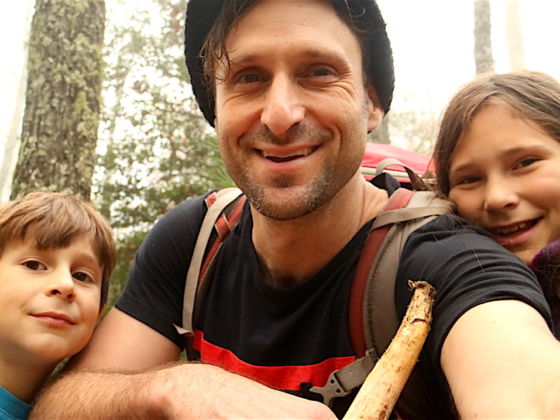 THE ART
OF RAISING TRAVELERS

RAISING TRAVELERS is a beautiful expression of parenting. As we put our families in places and situations that aren’t always comfortable or predictable, it forces us to confront certain vulnerabilities, insecurities, and prejudices.

It makes us stronger.

Of course, raising a traveler begins with being a traveler. And as counterintuitive as this may seem, travel has little to do with where you go. Ultimately all roads lead to the same destination anyway: inward. What counts isn’t how many countries you’ve been to but how deeply you inhabit wherever it is you happen to be.

In this sense, at least for me, the work of raising travelers often feels less like “taking” the kids anywhere and more like getting out of the way. We should remind ourselves that all children are born with travelers’ eyes. We start off literally making sense of the world through pure sensory perception and imagination. It’s only later that this gets clouded, compartmentalized.

All this said, perhaps my decision to raise kids via “travel-schooling” is more selfish than anything. It’s not just that I want them to grow up being comfortable in different languages and cultures. It’s that the kid inside me is still trying to fulfill his own travel dreams, which, just like when I was 6, aren’t found on any bucket list or map.

As a traveler, the guiding question for me has always been: how can I get deeper? Deeper into the canyon, the wave, the language, the landscape. The relationships with people.

It started with an early experiment in Mexico and Central America in the days before smartphones, the times when you’d have to go to internet cafes to send emails on AOL.

After arriving in a place, I’d scout out the terrain, typically some rocky point break with a bit of beach that either belonged to a local fishing family or was a kind of no man’s land on the edge of town. I’d ask the closest family if it was cool to camp there.

As a traveler, the guiding question for me has always been: How can I get deeper?

Almost always the answer was, “Yes, but why don’t you just stay aquí in my storage room/porch/side yard/oldest son’s bedroom, etc?”

I was always struck by this unexpected generosity. I’d imagine the opposite scenario: a 25-year-old brown kid from Costa Rica or El Salvador walking up to the Atlanta suburbs where I grew up and ringing a doorbell, asking a soccer mom if it was cool to set up camp there. And in my own way, even just by being a thoughtful listener and sharing some mutual buena onda, I would try to give something back.

The upshot here is that to travel deeply is to seek out and befriend the people. And so, when it comes to raising travelers, one of my first “rules” is to concentrate our time (ideally several weeks or months) in a single place so that we can really get to know folks. To become friends.

In 2017, we decided to spend three months in Spain, two of which were at Trevélez, a tiny mountain village in the Alpujarra. There the kids went to school, and lived the same rhythm as the other kids in town — of which there were only a couple dozen.

THE LAND AND WATER

If there were one subject I wish all kids could learn in school, it would simply be to study the natural history of their home terrain — wherever that might be. In public school, we learn about state history, US history. But there’s almost no thought given to the local history of the land right there upon which the school sits.

Consider that starting point and where it leads. Who were the people responsible for establishing the school? The town its in? What drives that town’s economy? How has that evolved over time? Where does the town get its water? What creeks and rivers create the watershed? What wildlife lives there? What are the predominant trees and wildflowers? How has this changed over time? Who were the original inhabitants? What did they call the area, the land, the rivers?

Without this kind of local knowledge, places remain storyless, meaningless. They’re just “towns.” But when you begin to learn the stories and characters, a simple walk in the local woods can take on the feel of traveling through time and space.

Sometimes just hiking down to the river for water to make tea is all it takes.

In this video above, we explored an area of Sierra Nevada National Park in Spain and the Linville Gorge Wilderness in North Carolina. In Spain we followed acequias, old irrigation canals that have been there since the Moors first conquered the area in 7th century AD. And in Linville, we followed trails down to the river that were originally used by Cherokee hunters for hundreds, if not thousands, of years.

My travels have always been shaped around “missions.” Whitewater kayaking, backpacking, surfing, snowboarding. But in the end, they’re just glorified ways to get into places and stories you might not see otherwise. Sometimes just hiking down to the river for water to make tea is all it takes.

Another reason I love traveling with my kids is because they don’t see places as cliches. They don’t judge them (yet, anyway) in relation to one another so much as experience each for what it is, and who is there. Trevélez will forever be associated with their friend Molly. Mexico City, with Candela. Buenos Aires, with Abuelo and Gabi and Alicia. The platitudinous notion that a place is the “Tango Capital of the World” or the “Paris of South America” never enters their minds.

There’s a deeper lesson here. We in the West have a longstanding tradition of exoticizing the unfamiliar (perhaps making it easier to exploit/commodify). We forget that for someone on the other side of the world, a group of friends shooting archery and playing old church organs in Athens, Georgia may be just as “exotic” as Amazonia or Patagonia.

In this way, raising travelers is an opportunity to demystify the “other.” It’s giving your children a chance to appreciate (and pick up) the special knowledge each person carries within his or her given culture.

With this in mind, instead of a vacation chosen off an advertisement or a package tour, consider who — right there in your own family or circle of friends — has some interesting knowledge or skills they might like to share. Perhaps they live on a farm, or an apartment building in the Arts District. Some place different than what your family is used to.

I have zero illusions about how lucky I am. To be able to travel with my kids, to raise them as travelers, to work remotely and support this lifestyle; all of it is a gift beyond measure.

With that said, my hope is that others may take small steps, starting by “traveling” right where they are.

Indeed, this was all I ever did, starting at maybe six or seven years old. I remember so many days walking into the woods behind my house near the Chattahoochee River. Although I never really shot anything, sometimes I carried my BB gun.

My dad had taught me the hunter’s (and zen practitioner’s) way of moving into the forest and then sitting quietly for a while.

As always, after a few minutes of silence, the animals slowly started emerging. Thick grey squirrels would start chasing each other through the canopy. Birdsong would start back up.

And this is really the whole lesson. This is the art of raising travelers. All it takes is walking in. Sometimes it’s a long walk. Other times it’s right outside your window. But as soon as you’re still, as soon as you’re really listening, the forest — the world itself — begins unfolding for you.