The Ghan, also known as the Great Southern Rail, is a historic train that crosses the whole of Australia in three nights and four days, from Darwin to Adelaide (or vice-versa), taking passengers to remote locales in the country’s interior that would take serious effort to reach otherwise. Off-train excursions are just part of the luxury experiences that The Ghan offers, among high-end meals, open bars, and the care of superb staff. The best part is that all of it — every meal, all the activities, and all the transportation to and from the waiting train — is arranged on behalf of passengers, so no need to worry about logistics or the train leaving without you. 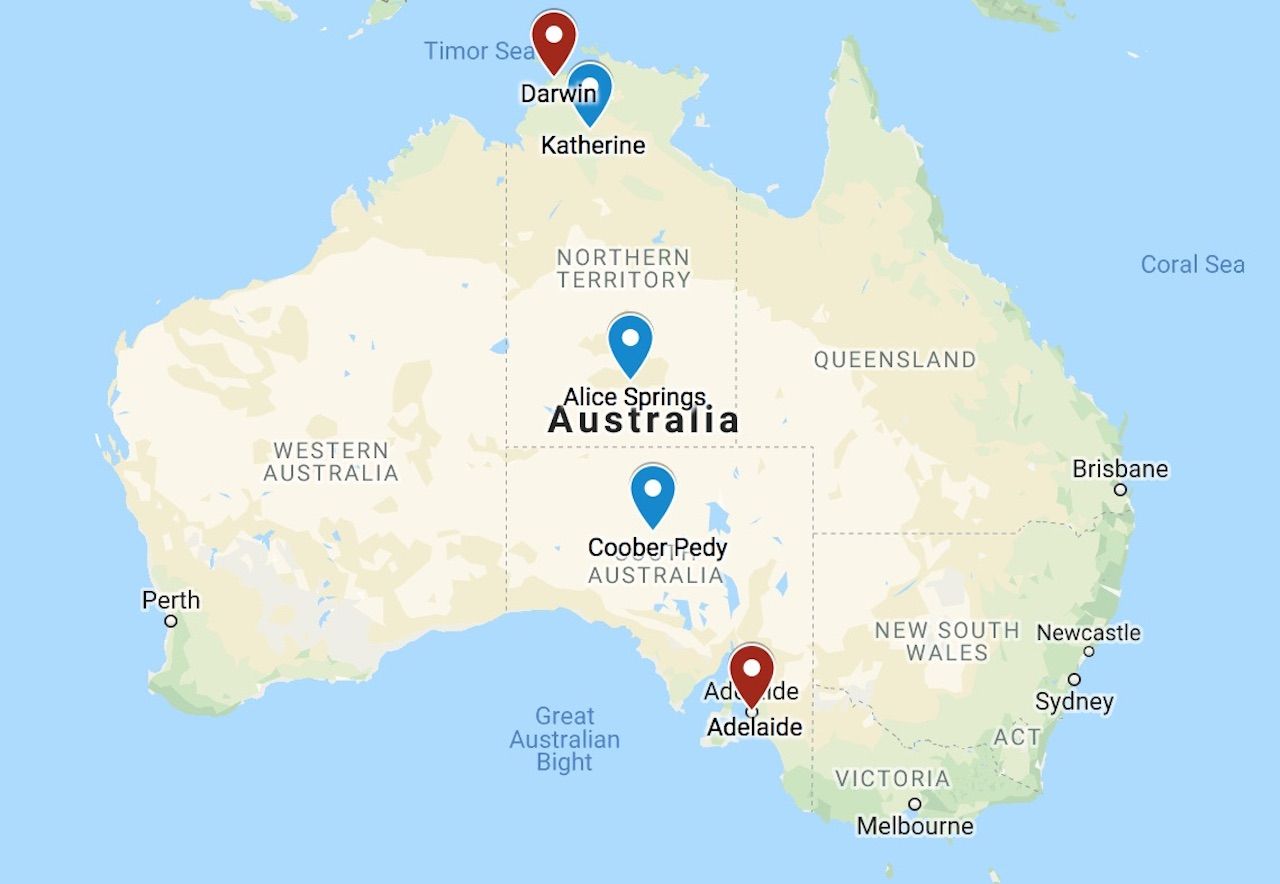 I had a chance to ride The Ghan this past July, during Australia’s winter, and found it to be an incredible way to get to see parts of the country that tourists seem to know so little about. Here are 10 reasons why riding The Ghan is the most magical way to see Australia.

1. You get to go to Darwin in the Northern Territory. 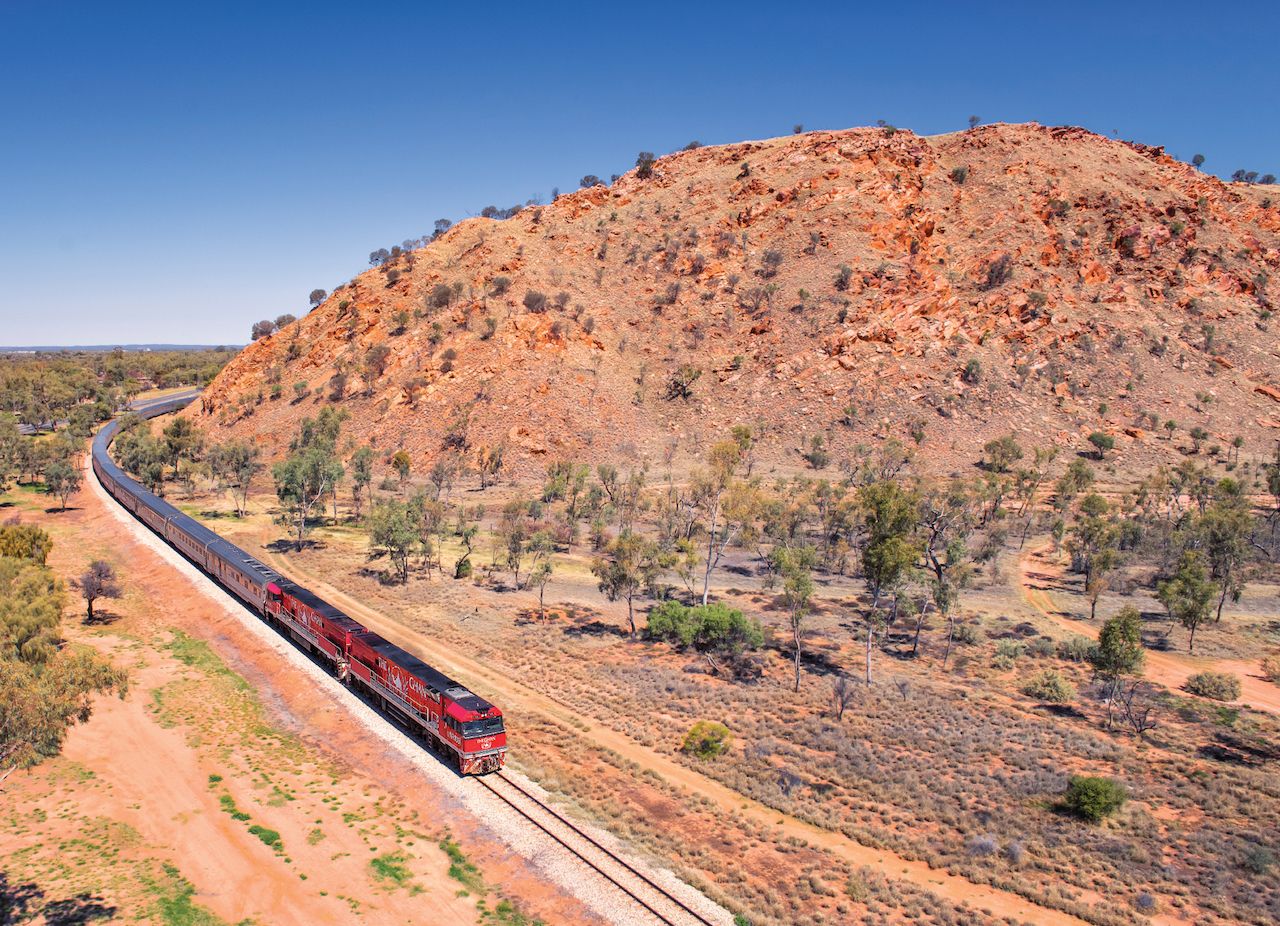 Whether you start or end your train journey in Darwin doesn’t matter; the point is you get to go at all. This Top End town is often overlooked during tourist journeys to Australia, as well as by Aussies themselves. Australia is a big place, roughly the same size as the United States, and many visitors fool themselves into thinking they can hit Sydney, Melbourne, Tasmania, Darwin, and Perth all in one go, typically going no further than the first two. The Ghan not only stops among some fascinating but remote Outback locations, it also requires that passengers visit Darwin and get to experience a part of Australia so many others miss.

2. You can cruise the Nitmiluk Gorge and spot crocs. 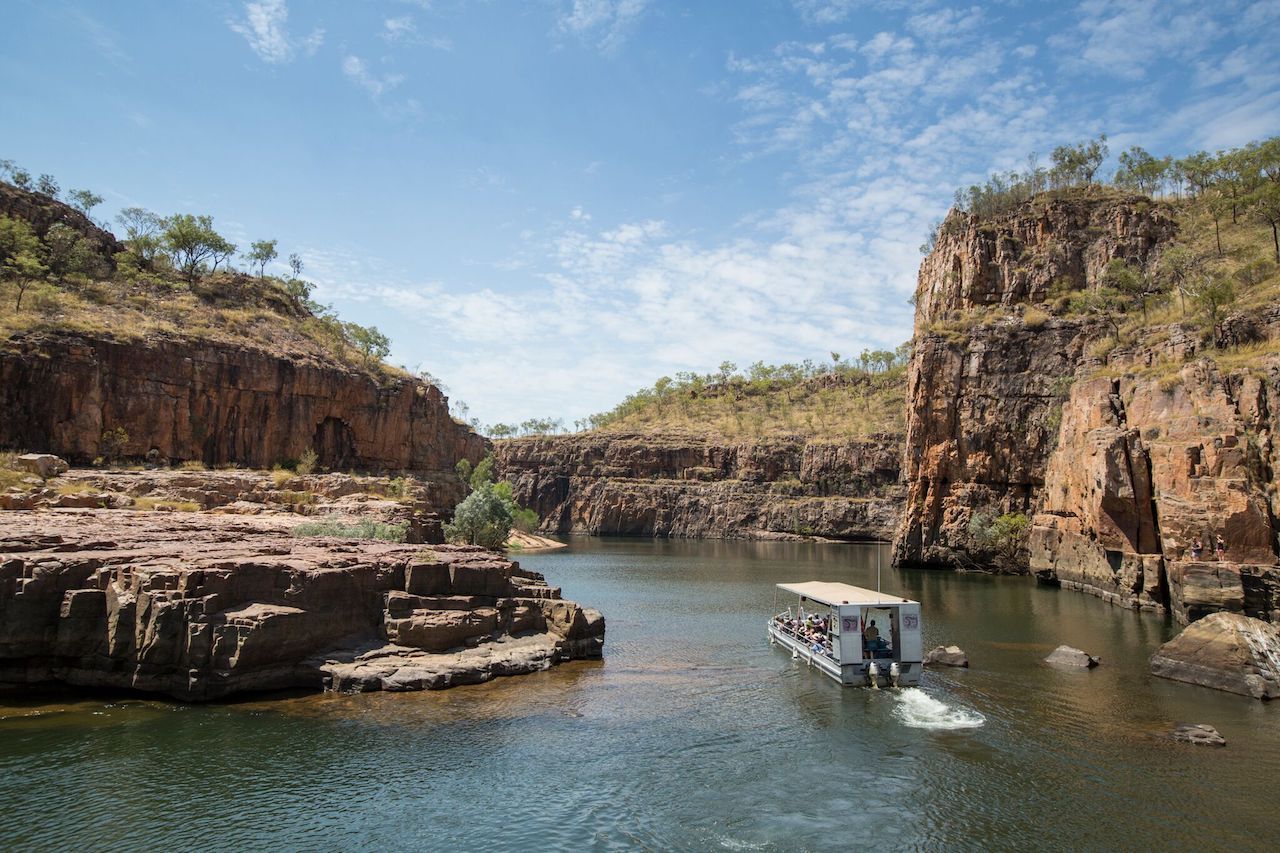 The national parks in the Northern Territory have vast landscapes that are rich in the culture of Australia’s First People, but getting there can take a lot of careful driving across unfamiliar ground. The Ghan takes you right to where you want to go, and in this case, it’s the spectacular Nitmiluk (or Katherine) Gorge, an ancient river gorge carved through sandstones that’s also a great place for spotting crocodiles. Excursions like this are included on The Ghan and are arranged in advance with your cabin attendant.

3. Or witness the grandeur of the gorge from a helicopter. 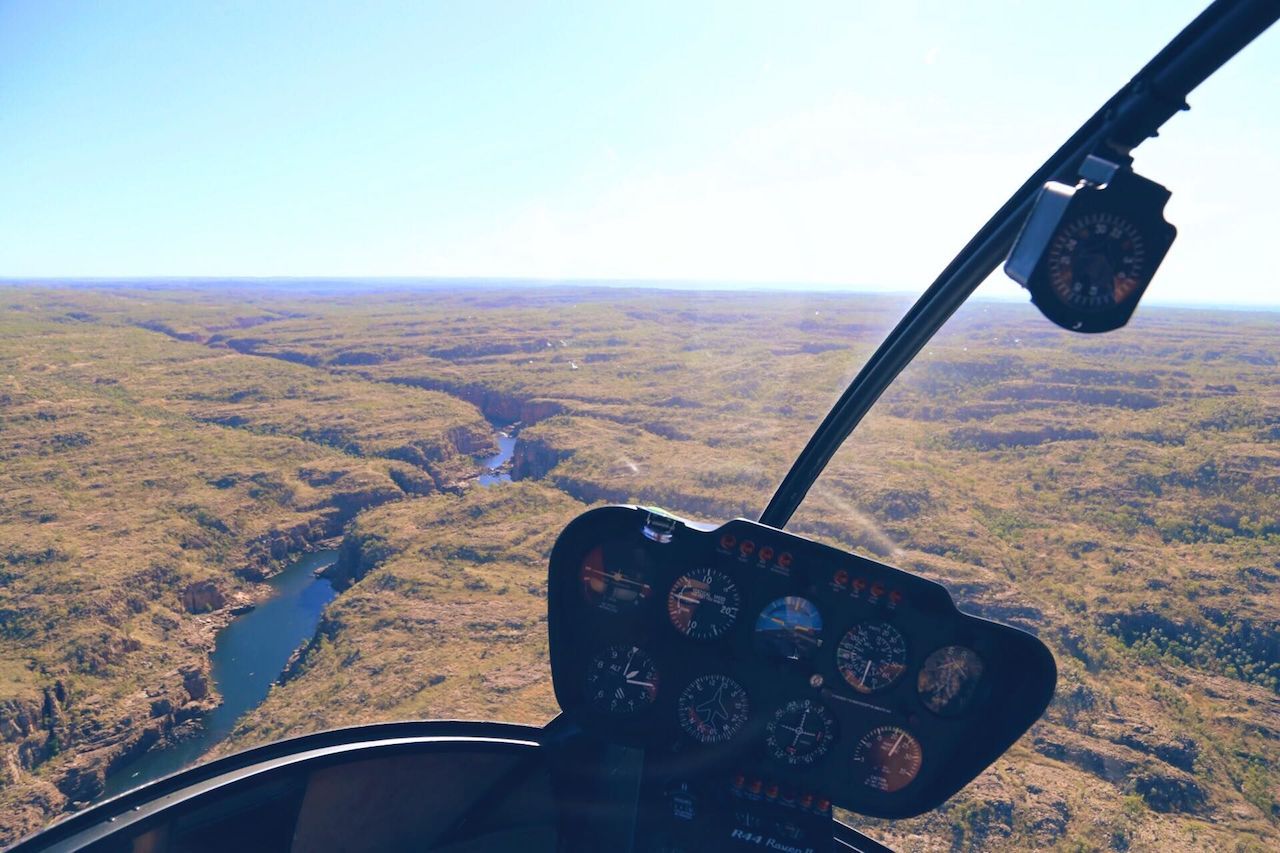 When the staff of The Ghan asked how I’d like to spend my time in Katherine, and one of the options was a helicopter flight over the gorge, there was no question about doing that. Every stop offers several options for off-train activities, and some, like this one, cost a little extra beyond the all-inclusive ticket price. Nitmiluk Heli-Touring does an incredible job of showing passengers the best sights in the area in a spectacular way. 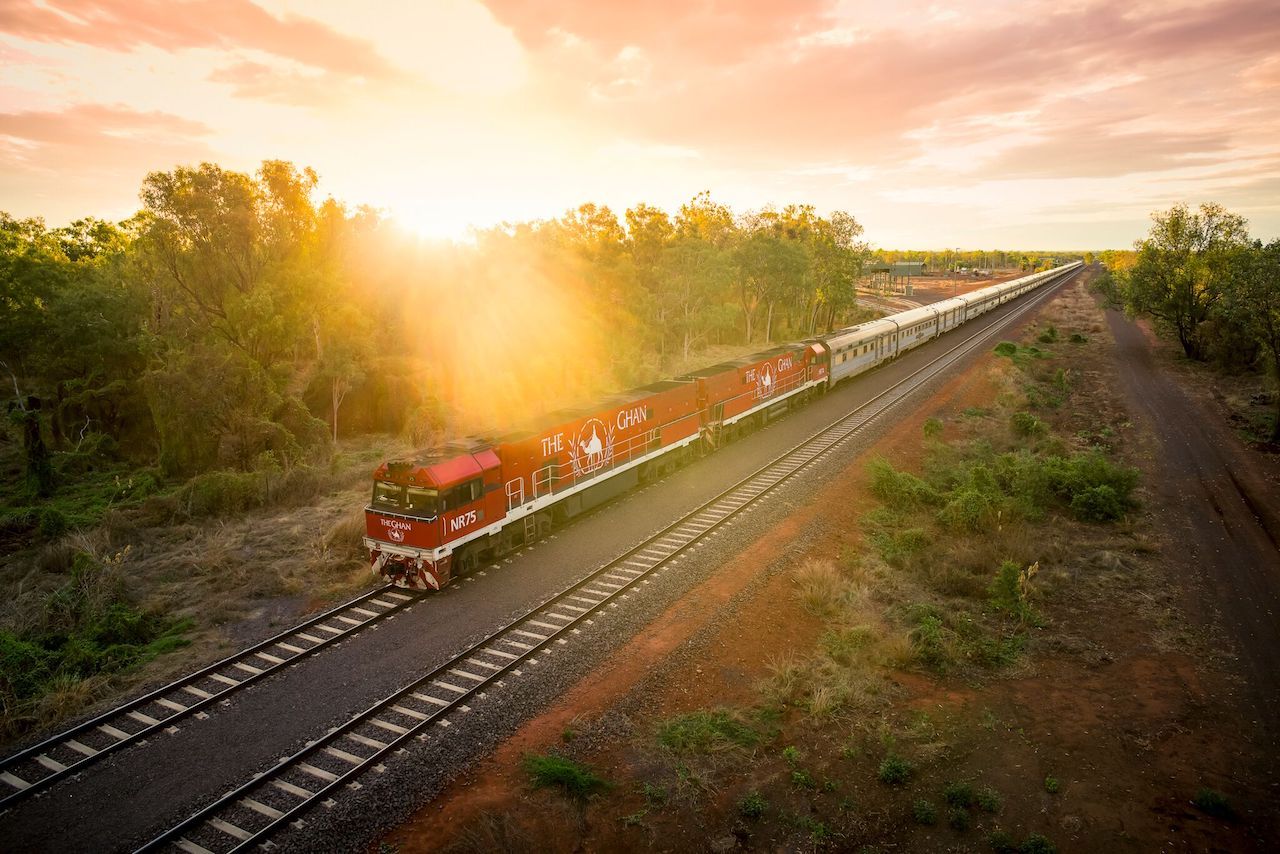 The Ghan became a sensation when it was the star of Norwegian Slow TV show, an experimental approach to television that in this case showed the train chugging along Australia in almost-real time, from many different angles, with no narration whatsoever. You have to be pretty captivating to make that work.

5. The food is next-level delicious. 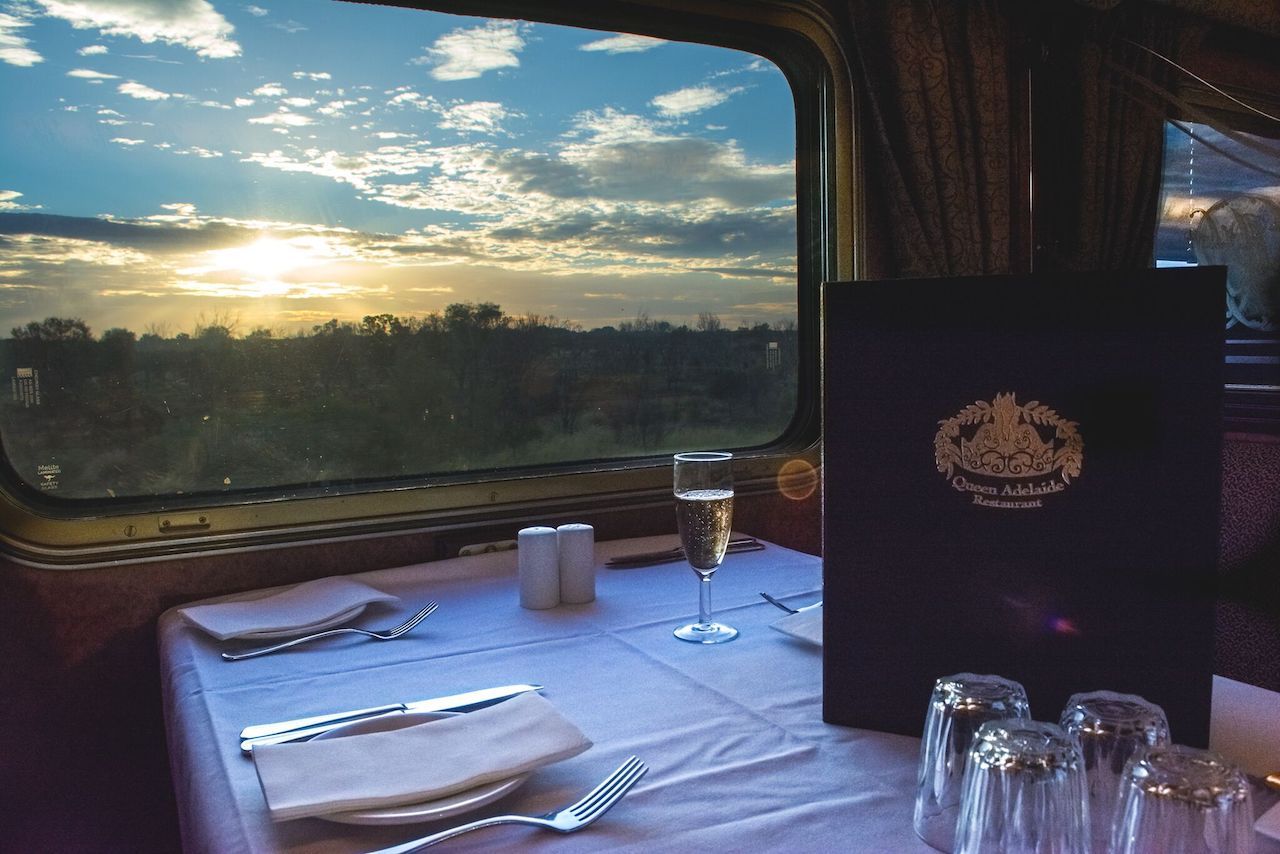 The expectations for food cooked on a moving train could be reasonably low, but the kitchen team of the Queen Adelaide Restaurant put together thoughtfully-composed menus for breakfast and dinner every day, serving up freshly-cooked gourmet cuisine that reflects the particular cultures of wherever the train happens to be at the moment. Most meals are served on the train, but some of them take place during off-train excursions.

6. You get deep into the heart of the Outback. 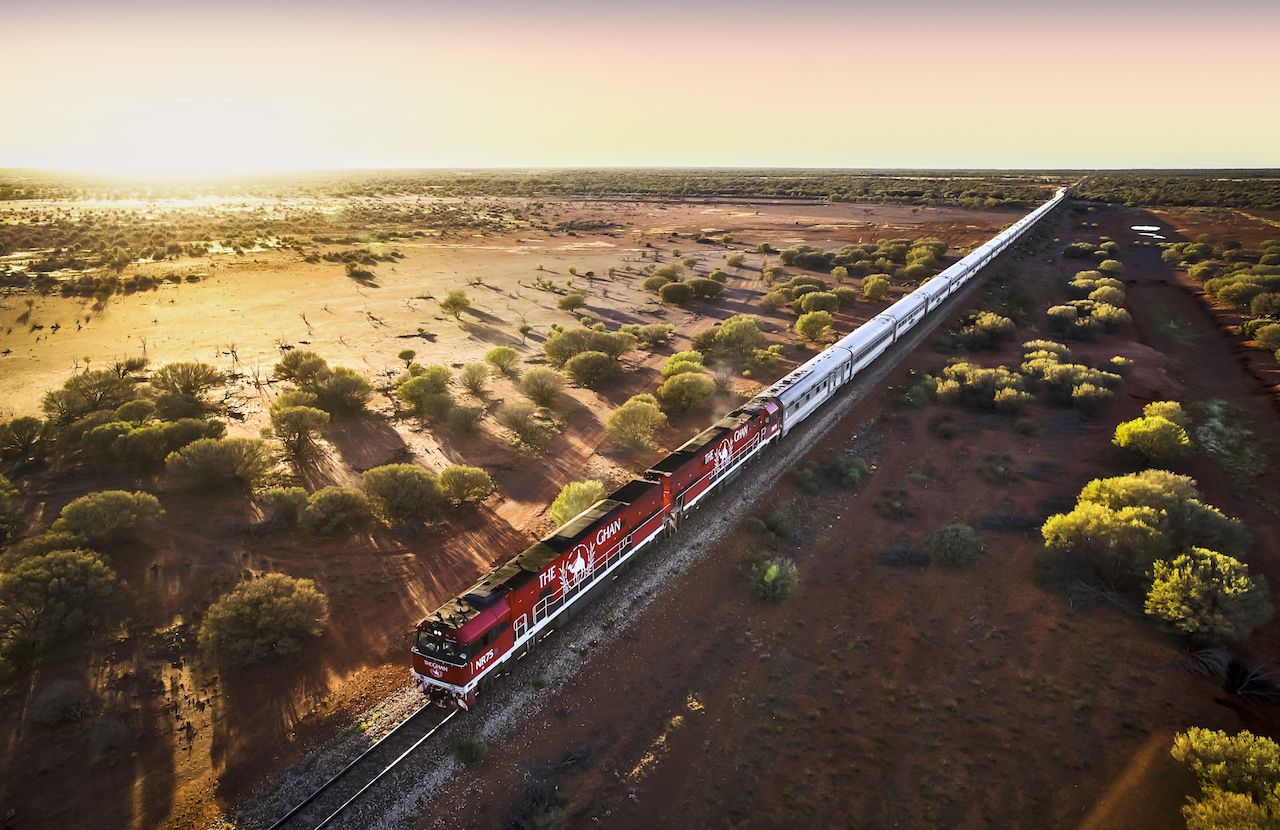 There’s nothing like taking ground transportation to bring perspective on the distance between two places, and The Ghan makes it impossible not to realize how big and seemingly empty the center of Australia really is. To get to spend significant time exploring the far reaches of the Outback is tough just from a logistical perspective, nevermind the realities of how harsh it can be out there, so it’s nice to have a train take care of all of that for you.

7. Australian wildlife is everywhere you look. 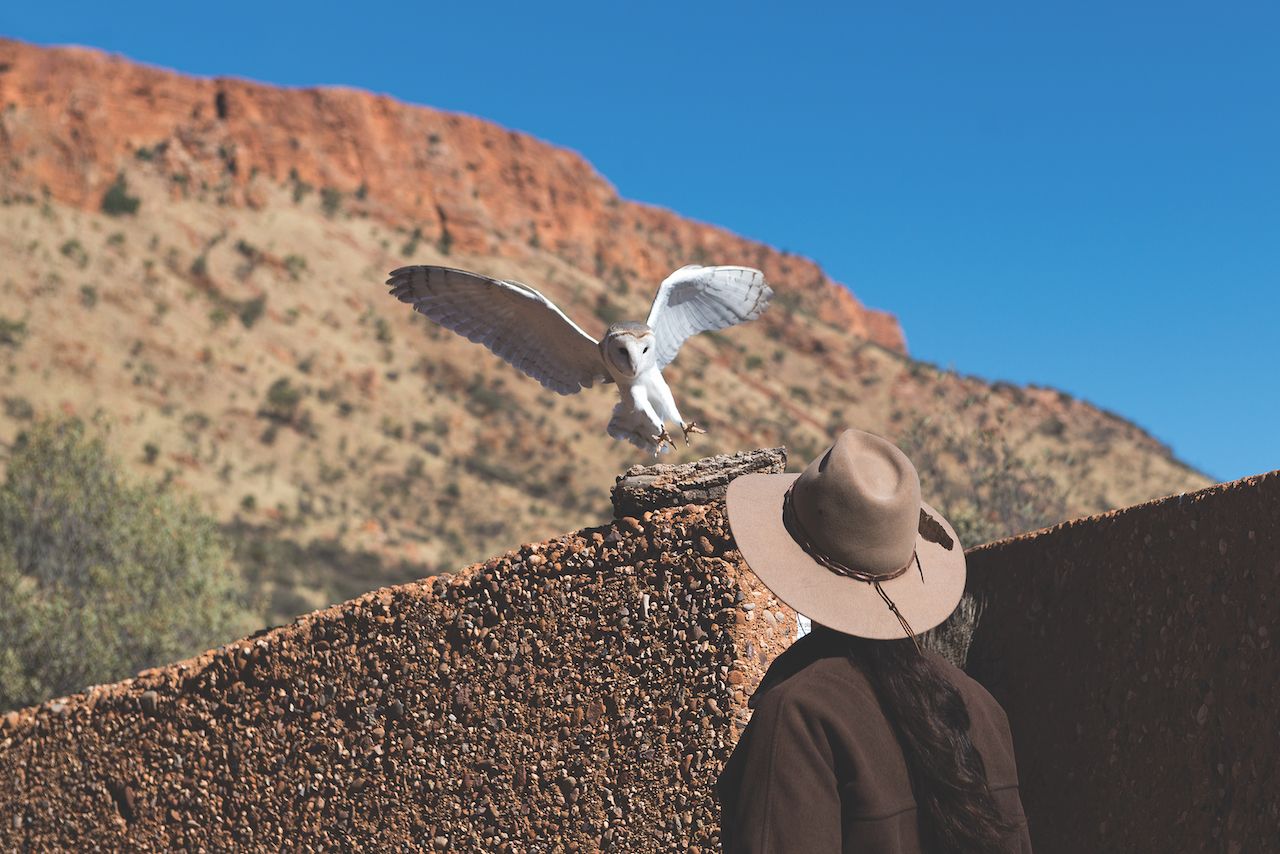 I’m not going to pretend that I’m excluding certain classes of wildlife here: there are snakes and spiders. But there are also parrots, rock wallabies, crocodiles, all manner of birds, and many other unique creatures waiting to be spotted. A guaranteed way to spot wildlife is at the Alice Springs Desert Park bird show, where raptors like the owl pictured here enchant guests who have selected this particular experience.

8. You get to explore the strange underground opal mining town of Coober Pedy. 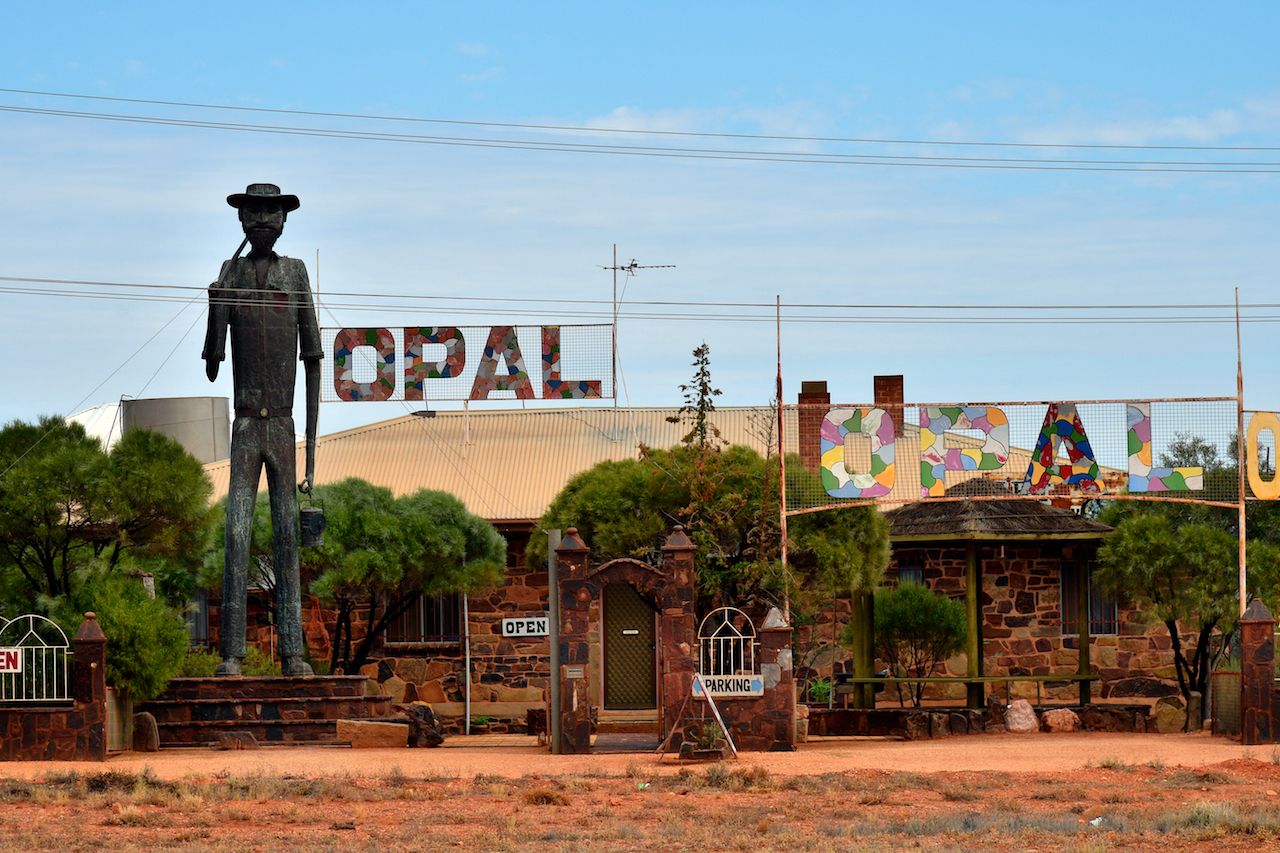 Coober Pedy is a town where most of the residents live underground somewhere in the endless desolation of the Outback. It isn’t an easy place to drive or fly into, but The Ghan takes you there easily — and although it doesn’t seem like the most fun activity on paper, the place is a sight to see. This mining town produces more than 95 percent of the world’s opal, but it’s more like the Gold Rush than coal mines in that it’s pretty much anyone’s game. European migrants are the main population, having sought their fortune there in the 1960s, making for an eclectic community of hard-headed, opal-seeking residents.

9. A desolate landscape is the best place for stargazing. 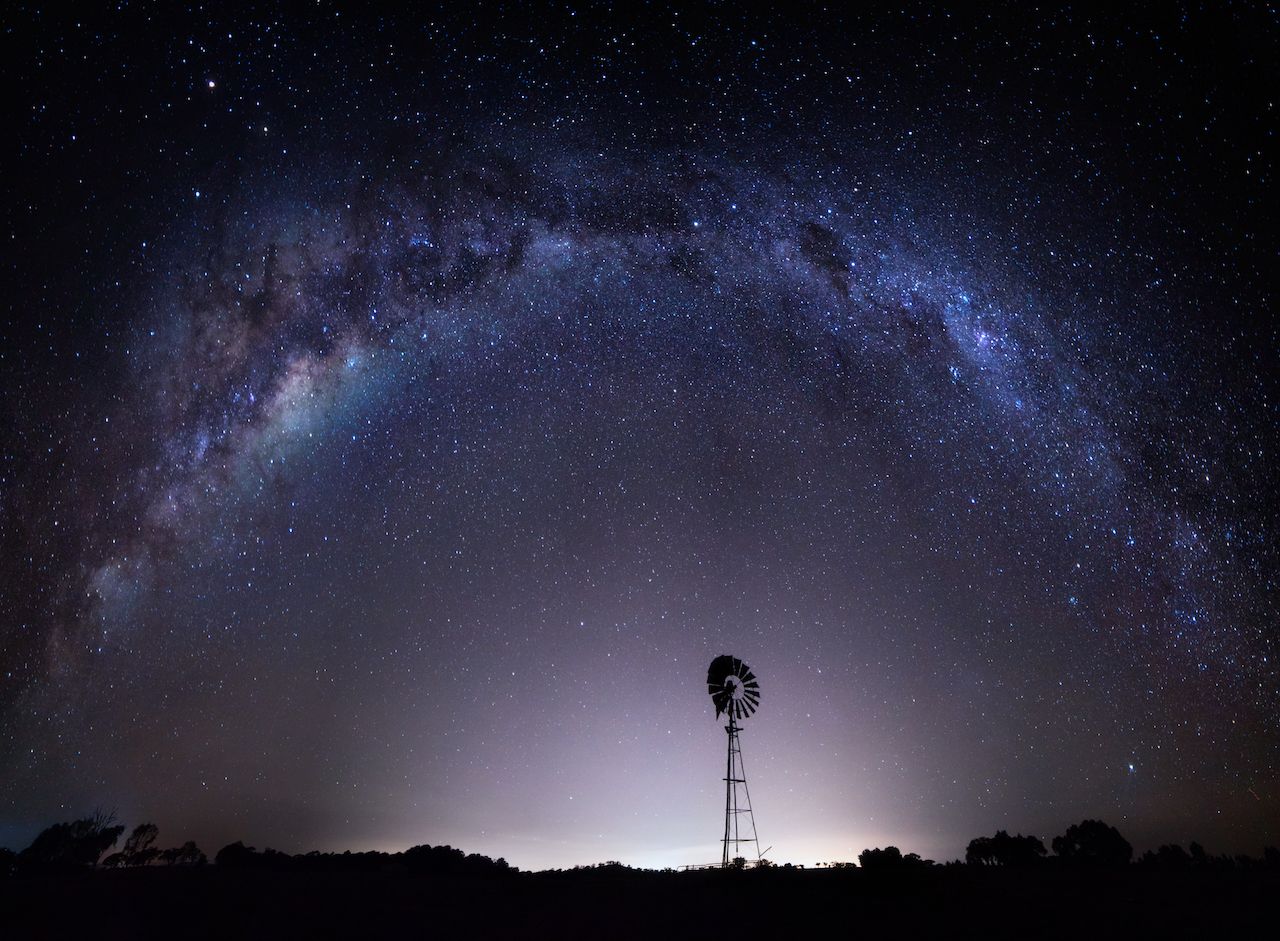 The Southern Hemisphere is definitely the winner when it comes to who has the better night sky. With no light pollution for hundreds of miles in the Northern Territory, The Ghan provides some of the best views into the Australian night sky, either from the train itself or from the outdoor dinner in Alice Springs. Watching the Milky Way bloom into perfect vision is something worth chasing.

Watch: On Christmas Island, Coconut Crabs Pinch Hard Enough To Snap a Golf Club in Half