Take in Nova Scotia’s best by checking out the province on a road trip. After all, Halifax, the province’s capital, is an easy day’s drive from Bangor, Maine (whether or not you take the Bar Harbor-Yarmouth ferry). If your 2020 travel goals include flying less, eating lots of delicious seafood, being surrounded by coastal views and quaint towns, and tallying up ocean adventures, you’ve found the right trip.

However much time you have is enough time. Grab a few friends, gas up the car, and point your compass northeast — here’s how to do it.

Leg 1: From Halifax to the Bay of Fundy 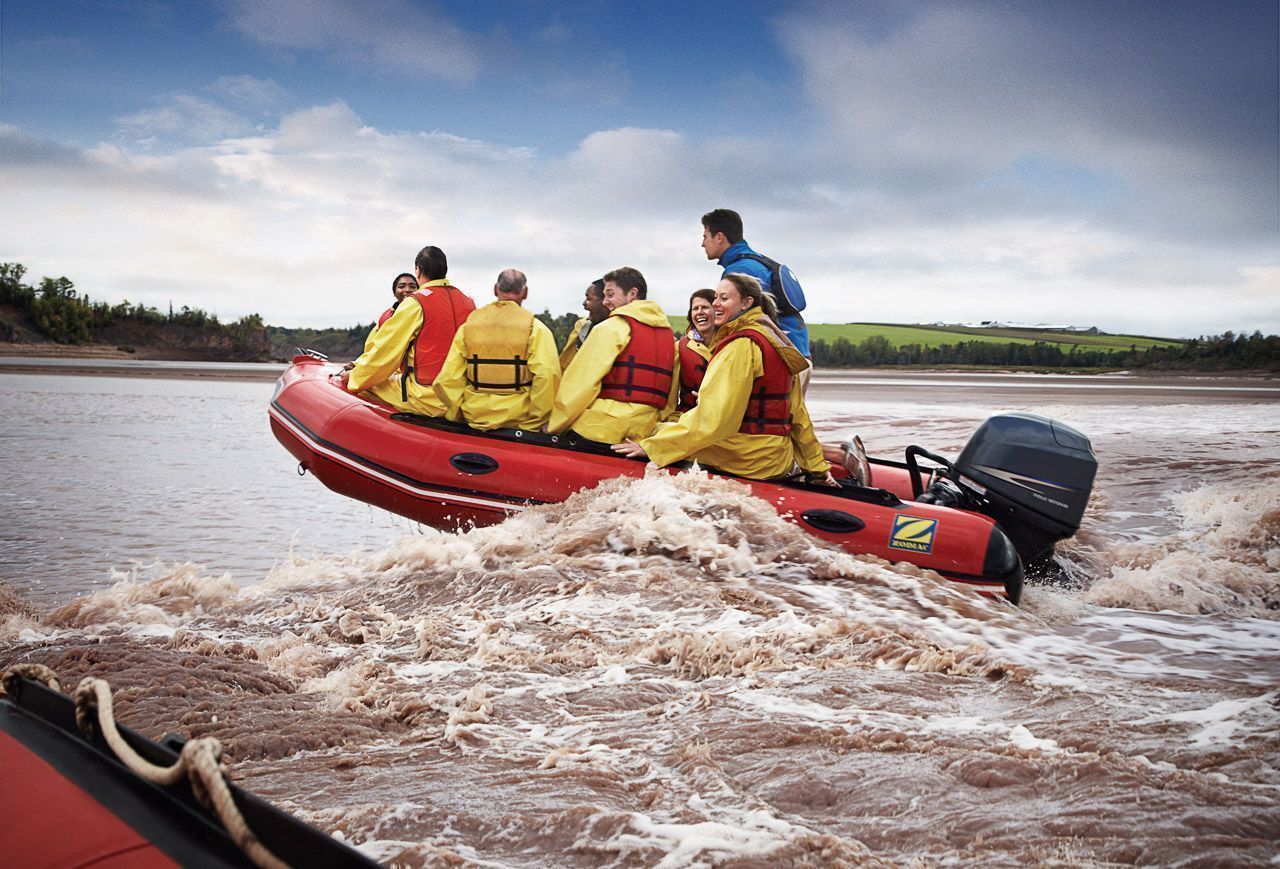 Start your road trip by heading north out of Halifax. Follow the signs for the town of Truro, ultimately aiming for the Shubenacadie River and the Bay of Fundy. The draw here is all about the water — the Bay of Fundy has the planet’s highest tides at some 45 feet, a result of the 70 billion cubic feet of ocean that flows in and out twice daily.

Thanks to those tides, the Shubenacadie is one of the few places in the world where you can go rafting up river. It’s called tidal bore rafting, and the best spots are only about an hour outside Halifax. A tidal bore is a wave of ocean water that pushes against the flow of a river during the incoming tide, so strong it reverses the river’s flow. When that wave rolls over the Shubie’s sandbars, it creates class IV to V rapids as tall as 20+ feet that can be ridden aboard a Zodiac for rollercoaster-like thrills. No paddling required, as you’ll need to hang on instead. Bring a towel and a change of clothes — this ride is just about as wet as falling in.

For something a little more mellow but equally unique, visit Burntcoat Head Park on the Minas Basin where, for three hours before and after low tide, you can walk on the ocean floor.

Tip: Not sure how to time your visits to coincide with the optimal tides? There’s an app for that.

Leg 2: Up to Cape Breton 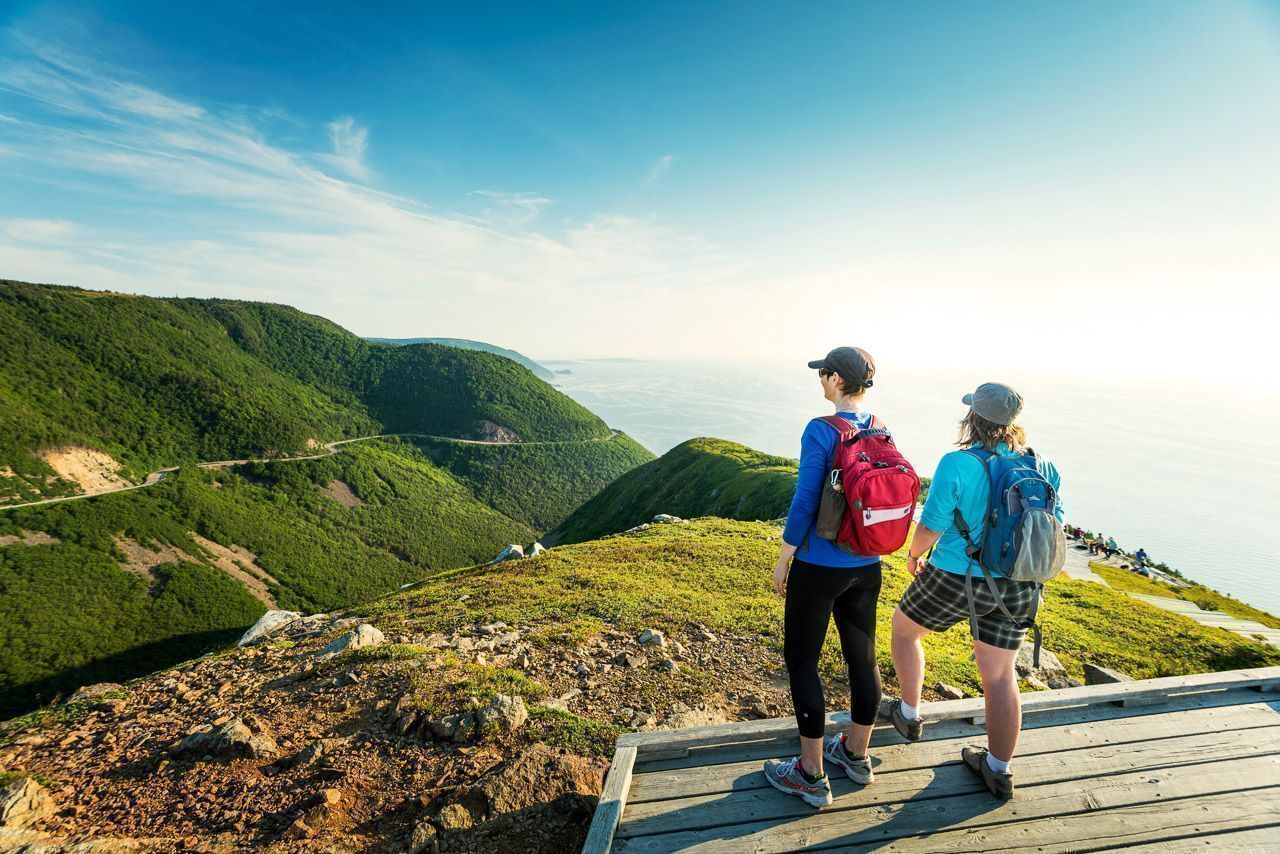 Next stop: Cape Breton Island. It takes about two hours to drive from the mouth of the Shubenacadie, in Maitland, up to the Canso Causeway. Cape Breton is about the same size as the island of Hawaii and has one of the world’s largest fresh-and-saltwater lakes at its center.

Deciding where to aim the car here is pretty easy — the Cabot Trail, which encircles the northern portion of the island, has been called one of the best road trips in the world. Take it slow to be able to experience all this route has to offer. Proceeding counterclockwise around the 185-mile loop is best — you’ll be in the waterside lane, ideal for your passenger to snap pics out the window and making it easy to pull off to admire the ocean views.

Beyond the Cabot Trail, the ideal Cape Breton visit should include at least one hike (on which you’ll likely glimpse some of the local wildlife) and a boat ride. Overnighting in the French fishing village of Chéticamp is another good choice, as is going inland to the lakeside town of Baddeck. Or, if you like to camp but don’t want to bother with the gear, try Parks Canada’s oTENTik at Ingonish Beach Campground. Ingonish, part of Cape Breton Highlands National Park, also has a lantern-led evening walk for a different way to explore the area. 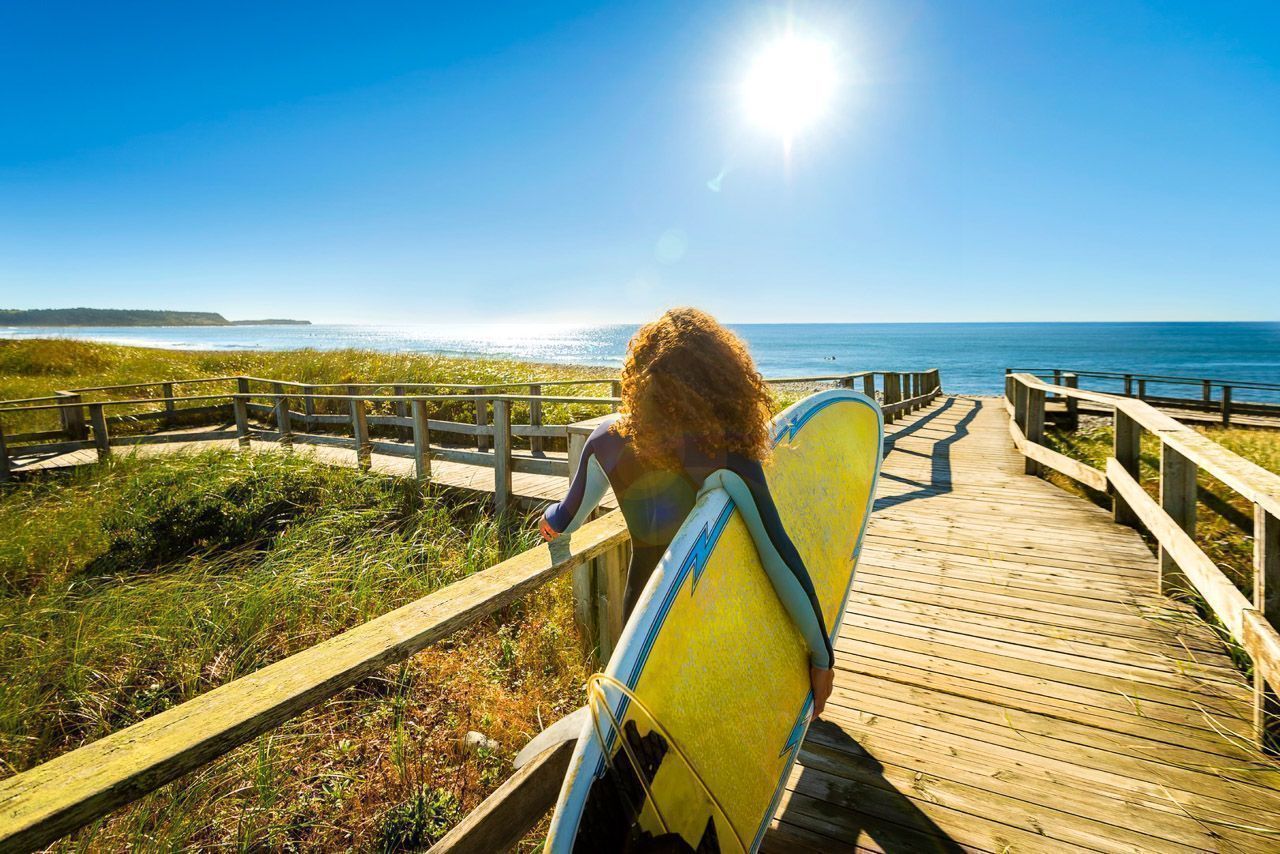 Back on the mainland, drive southwest to Sherbrooke and then continue in that direction along the Eastern Shore. Some of the best surfing on the continent’s eastern seaboard is at Lawrencetown Beach Provincial Park, just a half-hour from Halifax. Yes, you’ll need a wetsuit — book lessons or rent equipment from East Coast Surf School.

You can also try kayaking through the archipelago of hundreds of islets that dot the waters just off the coast (though simply admiring them from coastal Highway 7 is an experience in itself). These views define the Eastern Shore, Nova Scotia’s wilderness coast.

Leg 4: South of Halifax to some of Nova Scotia’s most famous sites 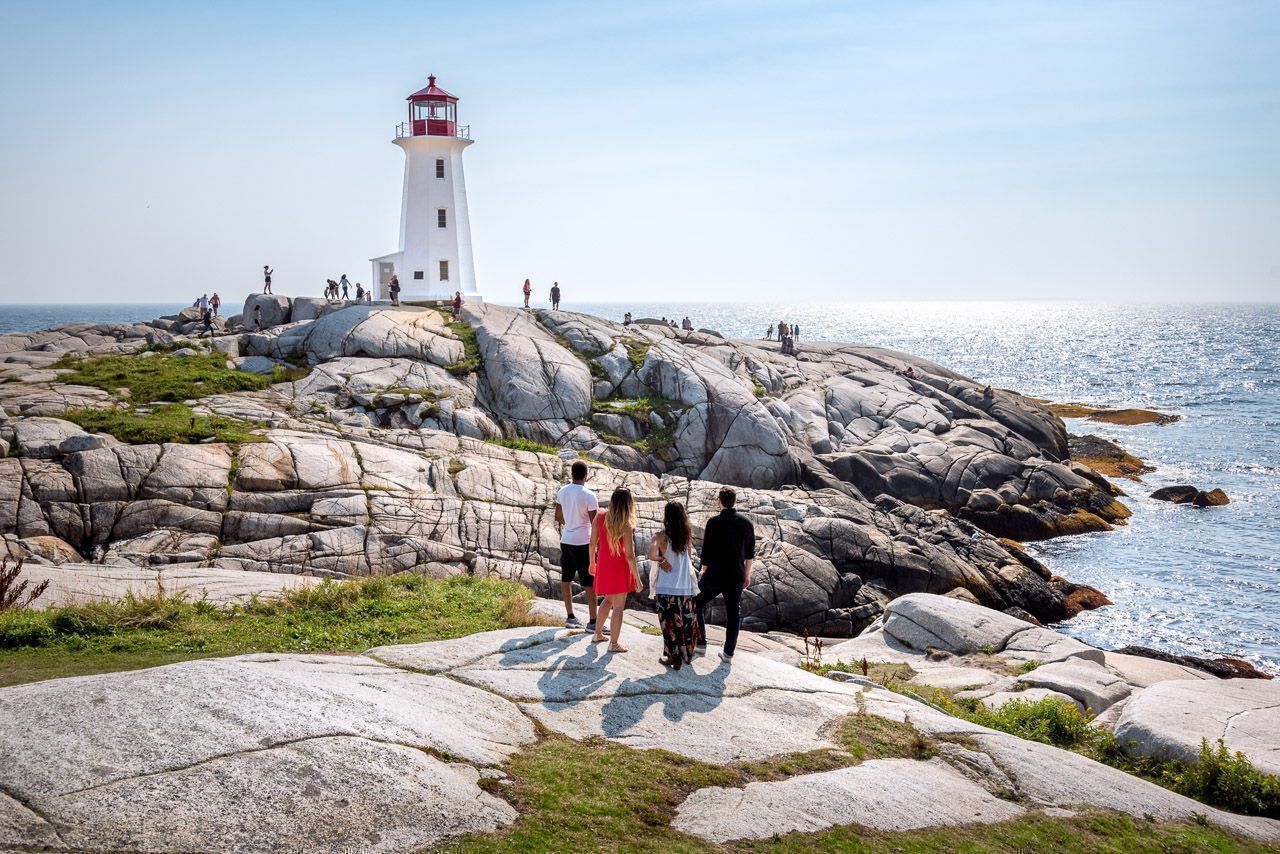 Less than an hour south of Halifax you’ll find Peggy’s Cove, site of a charming fishing village, a famous lighthouse, and waves dramatically pounding a picturesque peninsula. Get your shots for the ‘gram (this is the most photographed lighthouse in Canada for a reason), but obey the warning signs — rogue waves have snatched sightseers who wandered too close to the water.

When you’re ready, continue south along the coast to Lunenburg, passing through the coastal villages of Chester and Mahone Bay on the way. Especially at sunset, the UNESCO World Heritage Site’s historic waterfront looks like a watercolor painting, the vivid hues of its buildings reflected in the harbor. If you’re lucky, the Bluenose II will be docked and you can take advantage of a free deck tour or sign up for a harbor cruise (advance reservations recommended for the latter).

Leg 5: Down to the South Shore 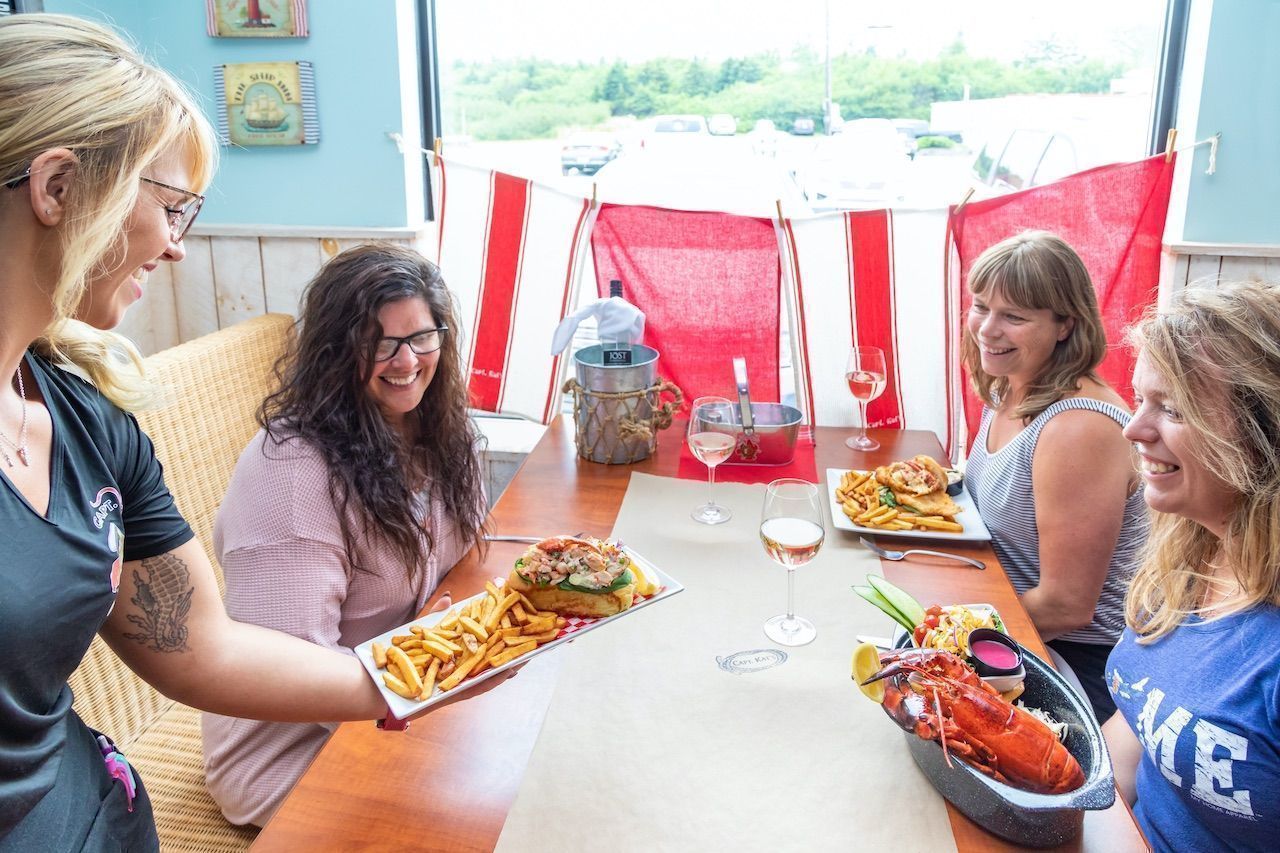 Don’t stop now! To see more of Nova Scotia, follow the Lighthouse Route to Canada’s lobster capital, Barrington, near the province’s southernmost point. It will take a little under two hours from Lunenburg…unless you can’t help but stop and relax at a stretch of sand like Rissers Beach Provincial Park or Summerville Beach Provincial Park along the way.

Barrington is known not only for its lobster but also for being the gateway to Cape Sable Island. Here, you can catch a glimpse of the Drowned Forest, the remains of a 1,500-year-old forest hidden by the waves except at low tide. Or, explore one of several picturesque white-sand beaches — you should have it virtually to yourself.

Leg 6: Up to the Annapolis Valley 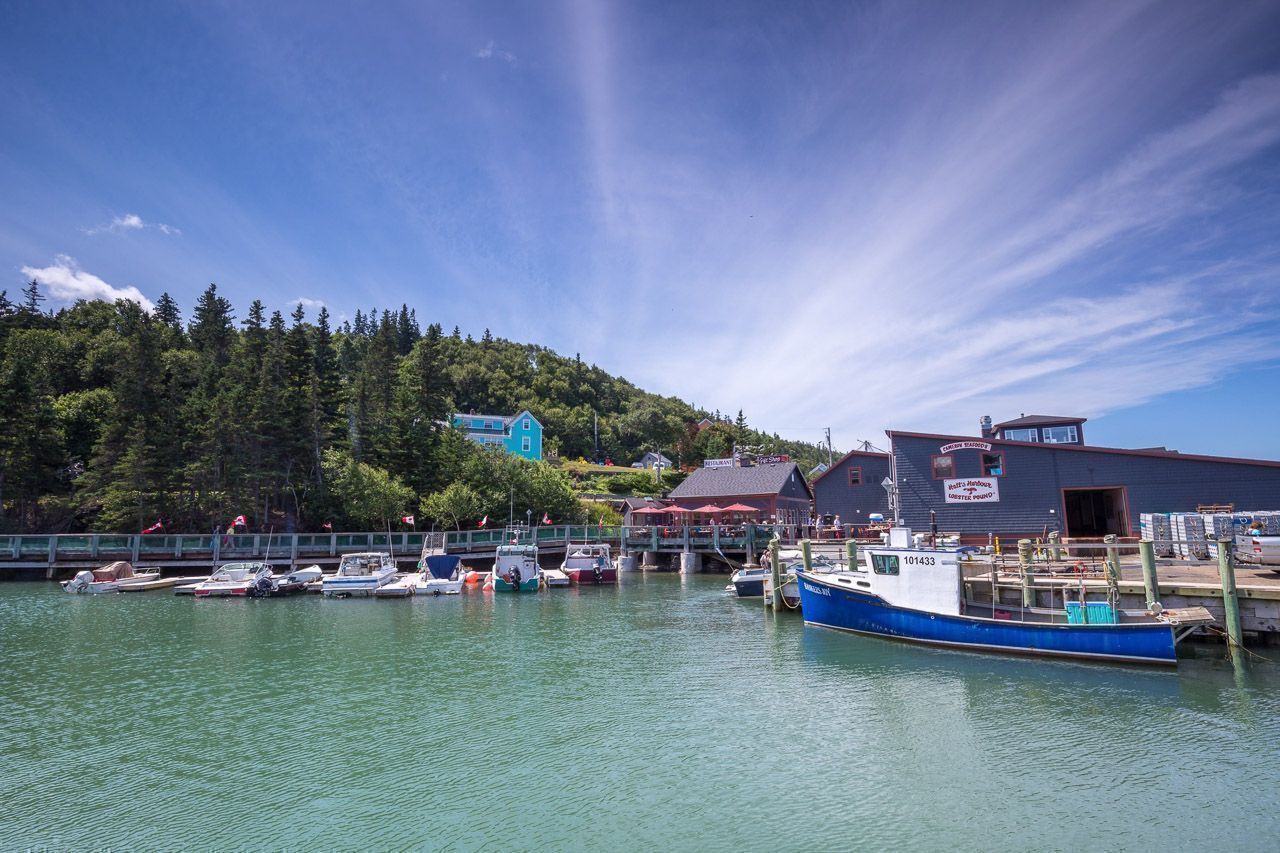 To complete your circumnavigation of the province, head north out of Barrington towards Yarmouth, then on to Digby with its famous scallops (the scallop festival is in August), and to the historic town of Annapolis Royal. This is one of the oldest regions in North America, home to Fort Anne and Port-Royal National Historic Sites, and full of enough fascinating history to justify an entire trip on its own. The nearby Annapolis Valley, bordered to the north by the Bay of Fundy, is Nova Scotia’s key agricultural area, including being home to the province’s wine region. You can visit a few of the local wineries or simply enjoy the fruits of their labor at area restaurants.

Grab a last look at the huge Bay of Fundy tides in the picturesque fishing community of Hall’s Harbour (which also happens to be a great spot for an authentic lobster dinner). At low tide, fishing boats sit on the ocean floor next to the high walls of the wharf. When the tide reverses, you can watch the water rise an inch per minute, a phenomenon filmed for both IMAX’s The Living Sea and Sesame Street.

From Hall’s Harbour, it’s just an hour and a half back to Halifax. Whether you choose to head home from there or do it all over again is up to you!