After summiting Mount Everest in April of last year, Rob Lea still had two legs of his Ultimate World Triathlon to go: swimming the English Channel and cycling across the United States. With just a month between Everest and the Channel, Lea got ready. By eating. A lot.

Lea, an Ironman veteran and former half-marathon world champion, was out to accomplish not just what no individual he knows of had achieved before — conquer the world’s highest peak, navigate its most famously treacherous waterway, and ride a bike across a continent — but to do it all within six months. 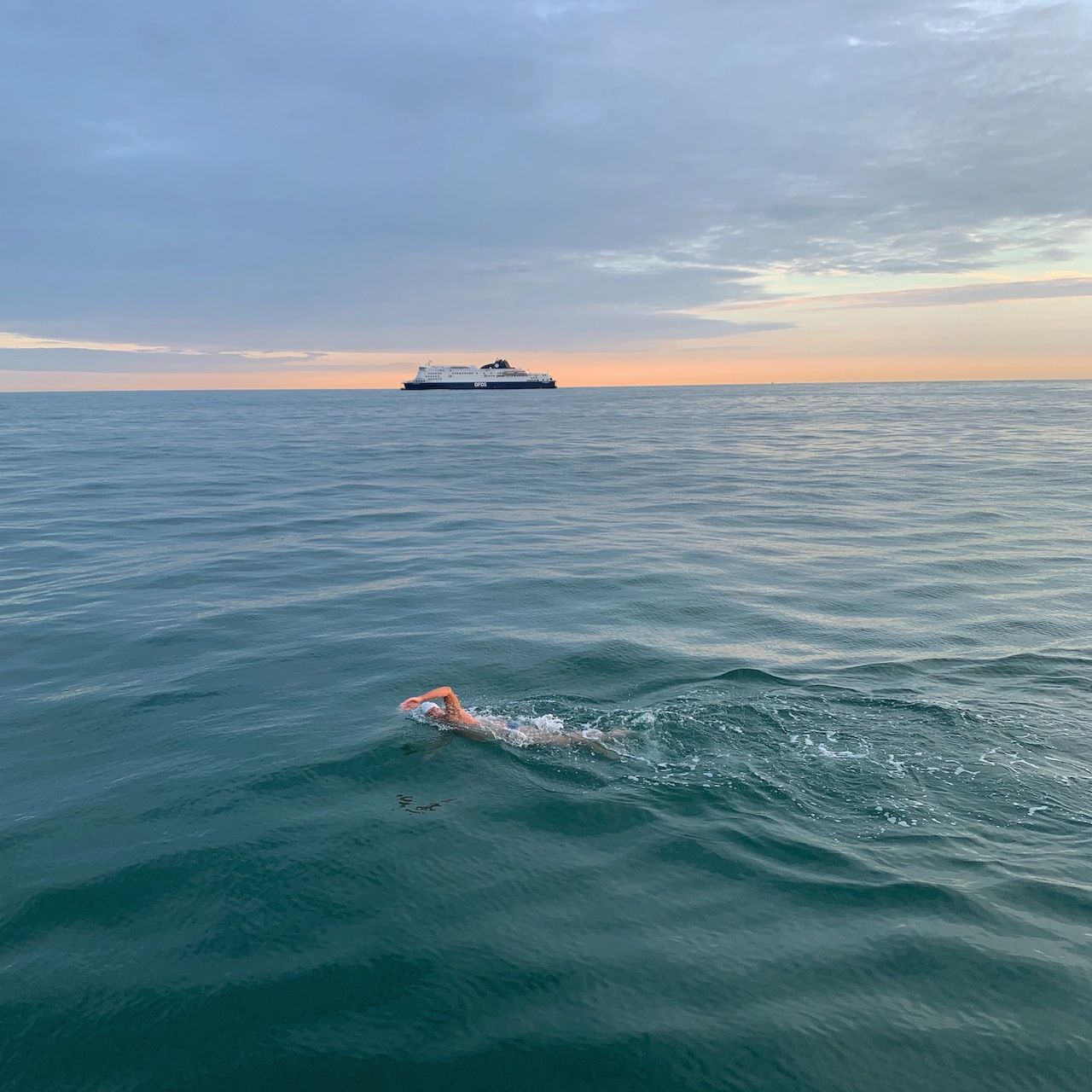 The six-month window meant he had no time to spare. Lea had lost 20 pounds during the Everest climb. While on the world’s tallest mountain, a fellow climber who had swum the English Channel had said to Lea, “You know how to swim, but you’re not going to survive it if you don’t put weight on.’”

Lea already knew this. Although he’d been a multi-state swimming champ in high school and an All-American at UC Davis, a Division II university, for Lea the biggest challenge of open-water swimming was the cold. In open-water swimming, the only protection from the cold is yourself.

“You can’t wear a wetsuit,” says Lea, explaining that since the first swimmer crossed the Channel in 1875 in a pre-wetsuit era, neoprene is not considered a legitimate part of open-water swims. “I’m a pretty good swimmer, but to me the biggest crux was the cold temperature. It took a lot for me, literally years of training, to be able to withstand the temperatures.”

Many months before swimming the Channel, Lea put a large metal tub in his backyard. “In the winter I fill it up. It ices overnight, I take an axe out, chop up the ice, and sit in that. And I would do that like five days a week. I would sit in that from anywhere from five minutes to fifteen minutes, in this ice bath,” says Lea. 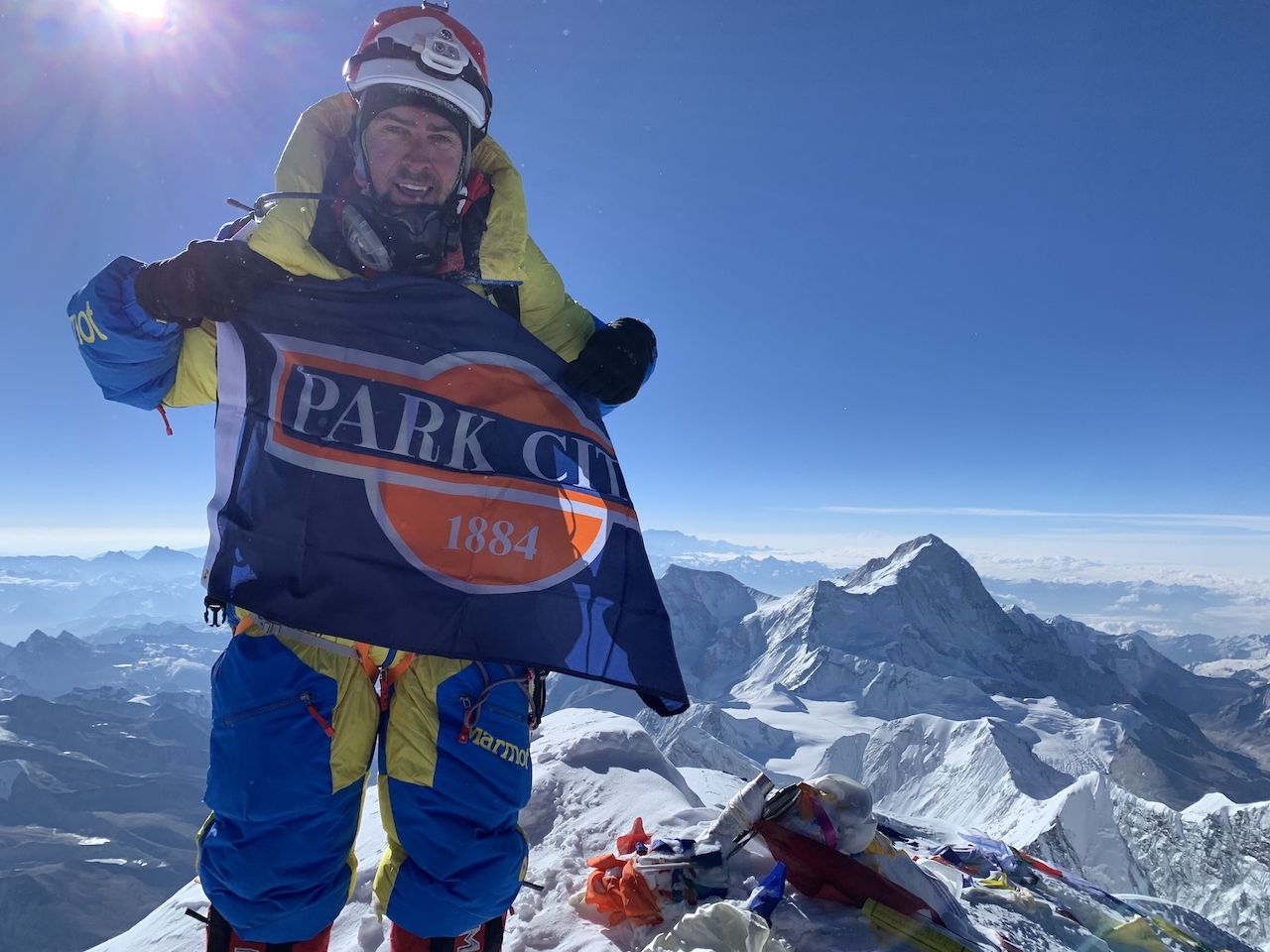 Beyond the mental training, Lea was working to build up brown fat, the insulating baby fat we’re all born with, which he needed more of. He also swam in Utah lakes and even in the San Francisco Bay, where the whitecaps and rough current make it “one of the best places you can train for the English Channel,” according to Lea.

Lea says he normally carries about 170 pounds on his 6’1” frame. He’d intentionally gained weight before the Everest climb, but had lost most of it during his weeks in the Himalayas.

“When I came back from Everest I was like 175, I think, and that was after losing 20 pounds. So I went into Everest at like 195. And then when I did the English Channel, I was about 205 pounds, or maybe even a little bit heavier than that,” says Lea. Not only did he eat as much as possible, feeling “bloated all the time,” Lea says he also tried not to work out too much, so he wouldn’t burn the fat he needed to build up.

Preparing for Everest had taken a different kind of discipline. If preparation for the Channel swim involved stuffing in as many calories as he could, getting ready for Everest had meant depriving himself of oxygen wherever possible.

Lea had already bagged some big mountains, among them North America’s highest peak, Denali. Seven months before Everest, he’d climbed the world’s sixth-highest peak with his girlfriend, mountaineer and environmental advocate Caroline Gleich. At the top of 26,864-foot Mount Cho Oyu, Gleich had also dropped to one knee and proposed. Lea had naturally said yes, so he’d be fitting in a wedding in between the last two legs of his Ultimate World Triathlon as well.

Although they already lived 7,000 feet above sea level in Park City, Lea and Gleich would need to adapt to even higher altitudes if they wanted to summit Everest within their constrained time frame. After his morning ice baths, Lea rode his bike indoors throughout the winter while wearing a Hypoxico mask, which mirrors 19,000-foot oxygen levels. Lea and Gleich also slept with a tent over their bed that simulates sleeping at 17,000 feet. 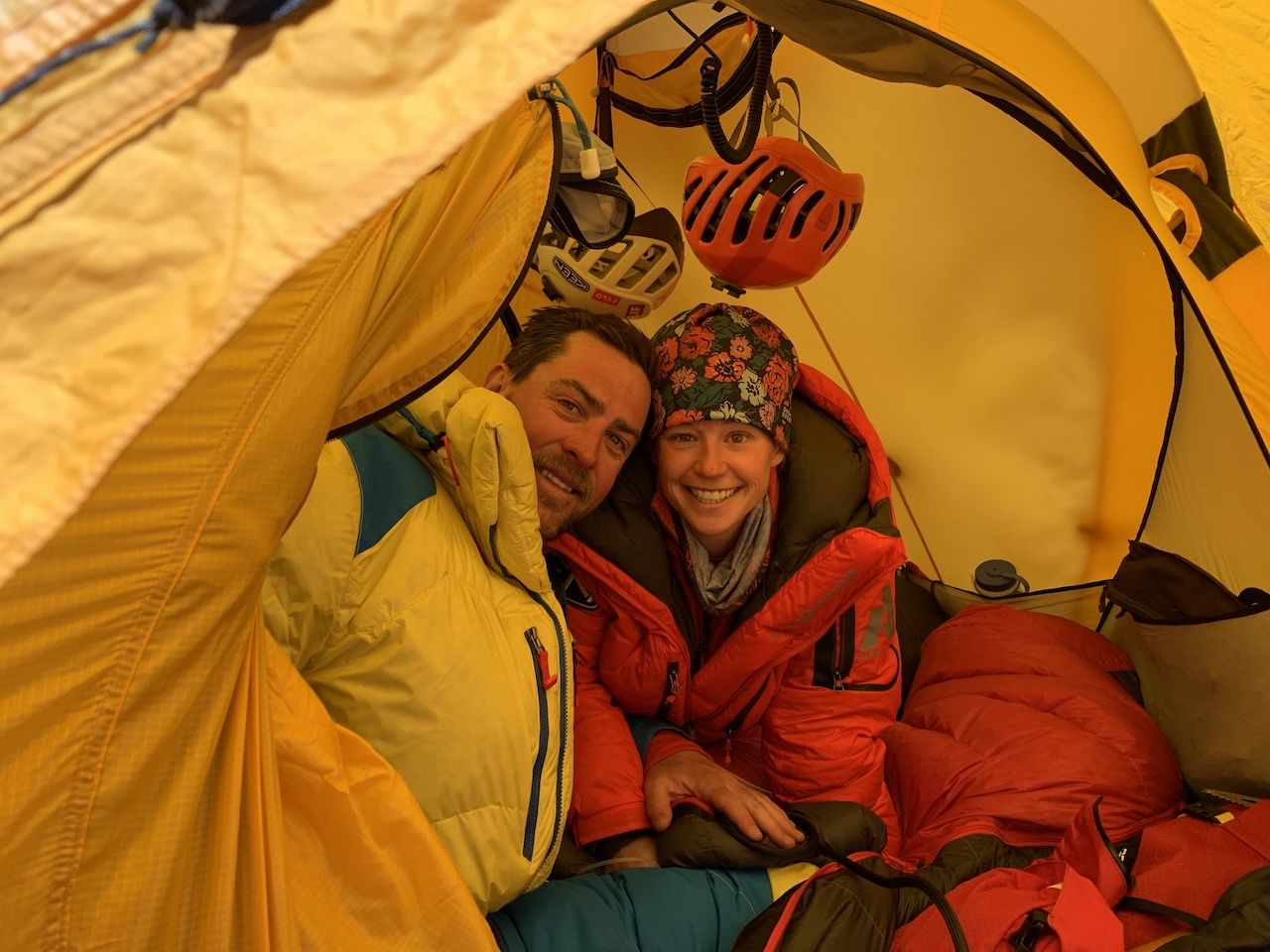 In the end, that meant they could cut off the time it would take to acclimatize at base camp from two-plus months to just 40 days — although Gleich almost didn’t make the trip when she tore her ACL backcountry skiing six weeks before they were set to travel. Gleich worked hard on strengthening to get a doctor’s green light to accompany Lea.

In April, they arrived in Tibet, where the pair would approach Everest from its less-traveled, and more challenging, northern route. A few weeks later, on May 23, climbers on both sides of the mountain rushed to summit ahead of a storm the next day. That was the fateful day memorialized in a startling New York Times photo of a dangerous ridge packed with hundreds of climbers, three of whom died.

While the north side wasn’t as crowded, several people were still planning to ascend. Lea and Gleich opted to hold off, deciding that they were in good enough shape to try the next day, when they would have to get to the summit and back before the storm hit.

“We actually just spent an extra day at Camp 2, which is 25,000 feet on our side, and watched everyone go up without us. That was really hard to literally stare at the inside of our tents and watch everyone else go summit. But it was probably the best decision we made,” says Lea.

When they did head up on May 24, they had to maneuver past a day-old cadaver. “The body was kind of hanging, and we had to basically scoot by it, you’re kind of rubbing up against the guy. That was kind of like reality. This could happen to any one of us at any time,” says Lea.

But when they did get to the top of the world, they had it to themselves. Part one of the world triathlon was nearly done, and it was time to start eating. 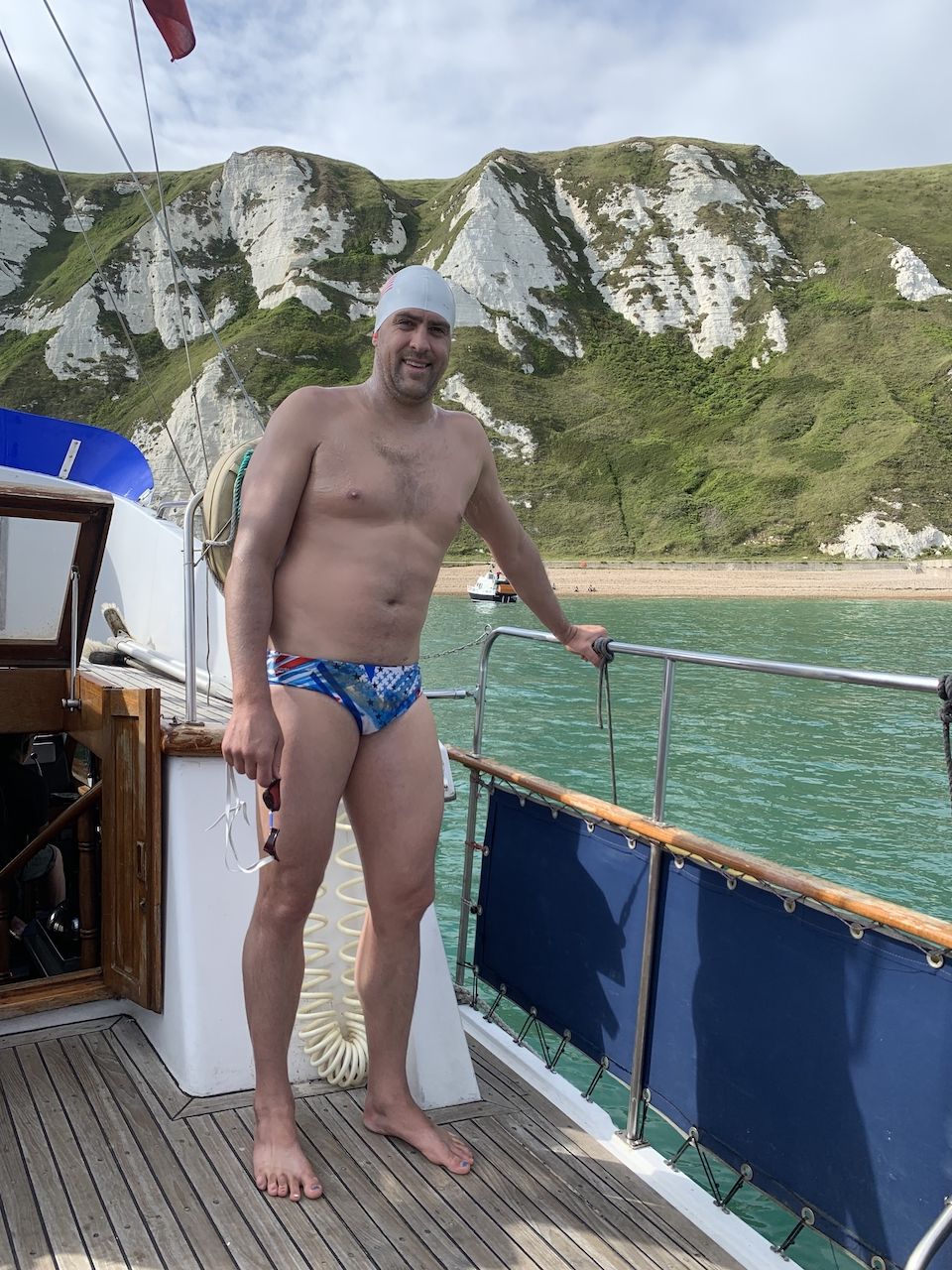 After his 30-day beer-and-pizza binge, Lea flew to England in early June. He arrived feeling under the weather and slept poorly, but Channel swims are heavily dependent on the Atlantic’s massive tidal changes and its equally volatile weather. When the boat captain rang him up the next morning, he told him that was his window. So Lea went the same day, setting off at 4:00 PM.

Although he felt unwell, one thing Lea hadn’t been worrying about was jellyfish. He had thought a sting or two would break up the monotony of a 12-hour swim. He was in for a shock, or rather, several.

“I thought a little jellyfish sting would be a kind of wake-me-up, a little adrenaline shot, so I was almost looking forward to it. But I had no idea that I was going to get stung that much,” says Lea.

“After the first 50 stings I was thinking to myself, ‘If this keeps up for the next ten hours, can I mentally take that? Can I physically take it? Is it going to give some sort of toxicity in my body from getting stung?’” 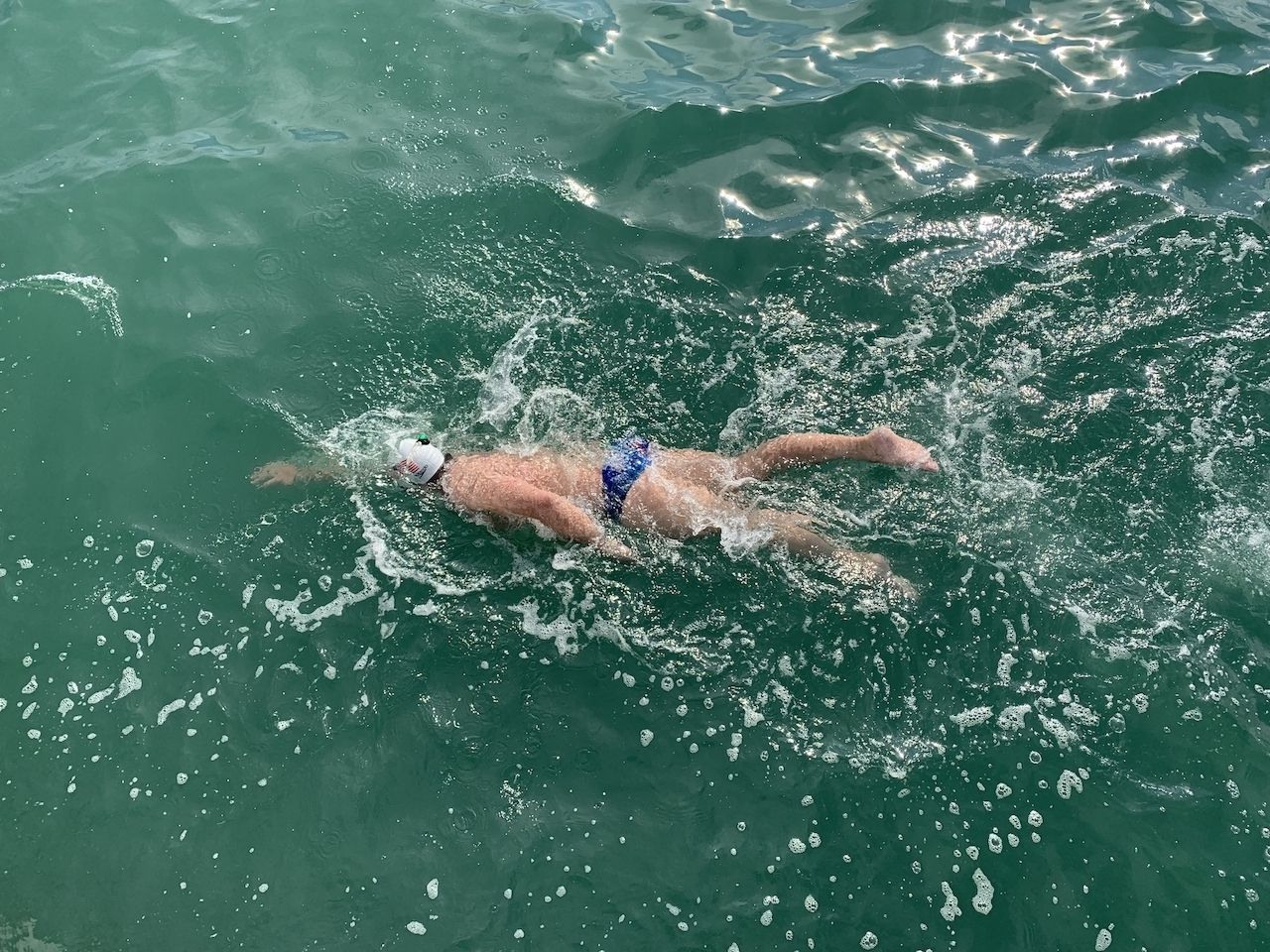 But Lea powered through the night, getting zapped well over a hundred times. “I was expecting to swim longer, and I basically didn’t know I was there until I hit sand.” He’d made it in under 12 hours. And then it was on to leg three.

First, however, Lea had to get married. On August 10, he and Gleich tied the knot at the top of the tram at Hidden Peak at Utah’s Snowbird resort, at 11,000 feet. This time, they took the tram.

While marrying Gleich did add to the tasks at hand, Lea credits Gleich with helping him set an ambitious goal in the first place.

“I’ve been an athlete my whole life but I don’t think without her influence I would have picked this massive goal to do, this kind of first-ever thing,” says Lea. 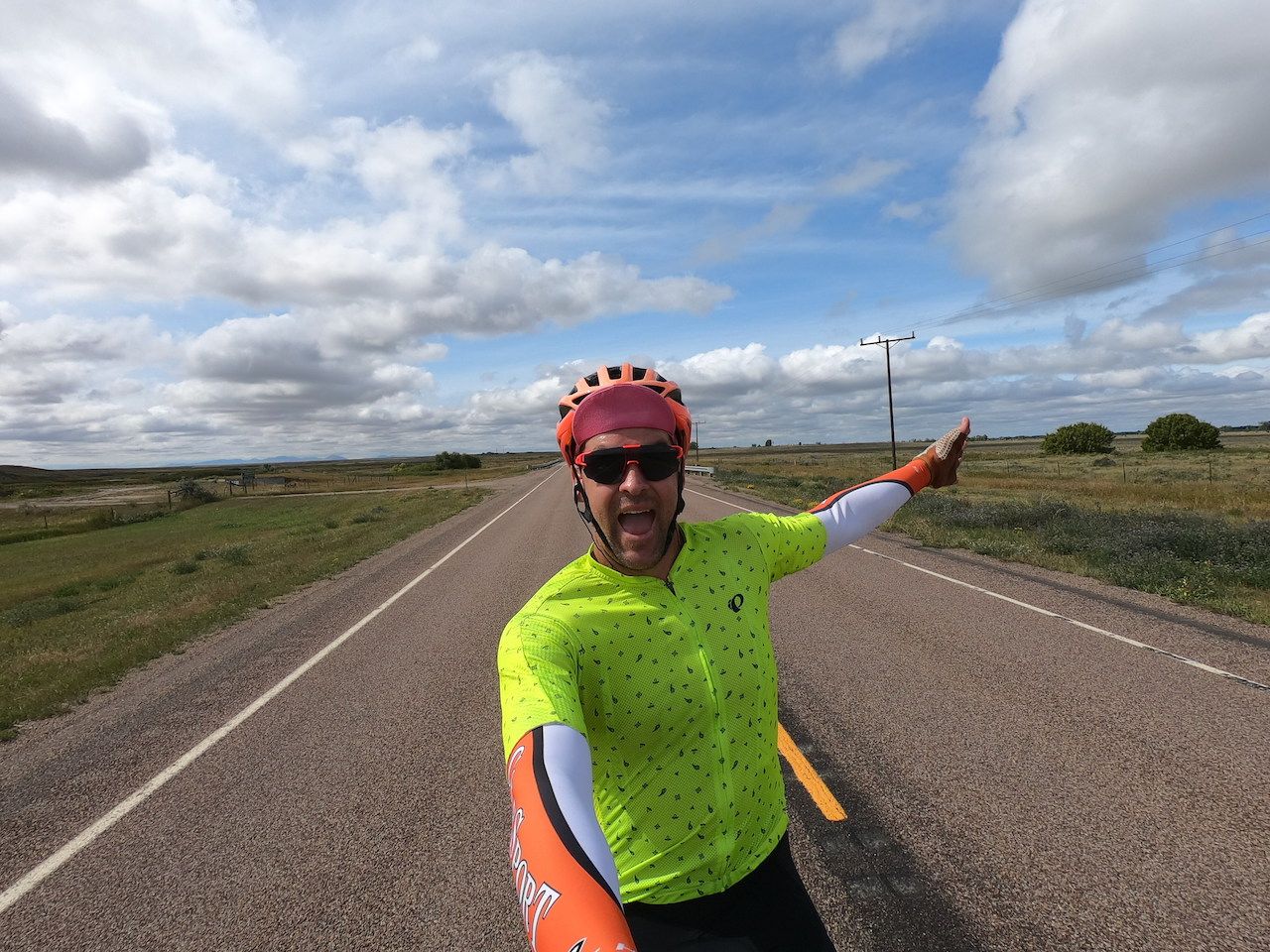 Less than three weeks later, Lea started his ride. He was surprised by how tough it was.

Lea had opted for a northern route from Anacortes, WA, to Vermont that would take him through the Cascades range and Glacier National Park. “Part of the reason I wanted to do that was because I live in the mountains, and I knew it would be more climbing to go through that area,” said Lea.

But with Mount Everest, the English Channel, and a wedding, Lea had only ridden a half-dozen times in the previous six months. Lea had intended to ride himself into shape because he’d done that before.

“One thing I didn’t think about was that to be able to ride yourself into shape, you have to have recovery days, and I didn’t have those recovery days,” says Lea, who averaged about 100 miles a day and even rode a couple of 130 mile days. “My body was in a world of hurt. My legs were just completely shot and I was having a tough go at it.”

Lea managed with support from Gleich and his mom, who met him at the end of each day. They brought food to the hotel so Lea could just shower, eat, and have some company after six, eight, or ten hours on a bike.

“It’s lonely out there when you’re riding your bike…so it was nice to have someone to chat with at the end of the day.” 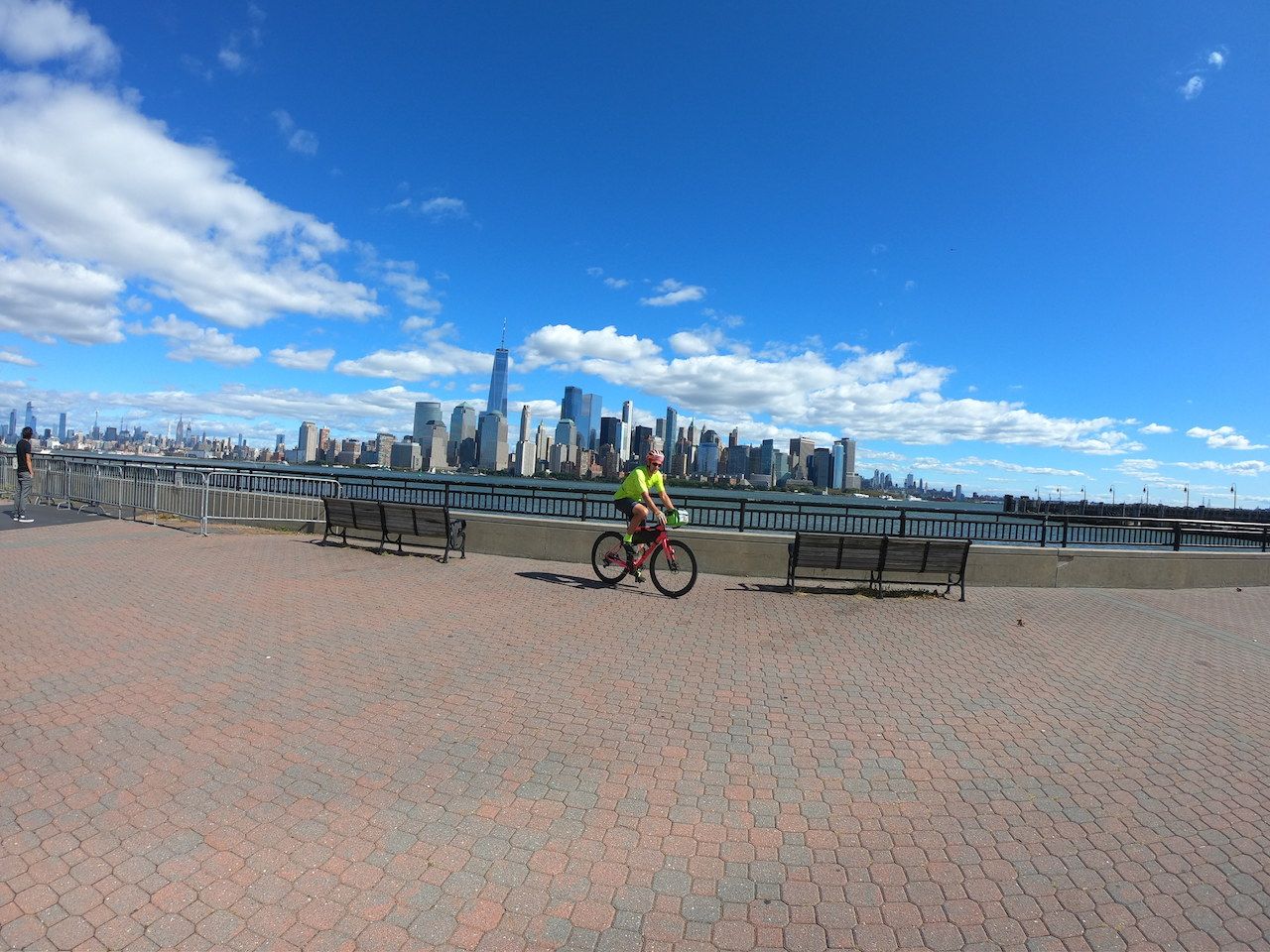 Lea hit New York City in October, rode up Sixth Avenue, and kept on riding to Massachusetts, where he took a ferry across to Nantucket, arriving at his destination 3,600 miles later.

“When I look back, I wasn’t as prepared as I wanted to be when I started the swim, because I had Everest right before. Same thing goes for the bike,” he says. But for Lea, it was never about being easy.

NewsScientists Have Found the Limit of Human Endurance
Tagged
Climbing Cycling Extreme Sports
What did you think of this story?
Meh
Good
Awesome