Spain’s Balearic Islands undoubtedly have lots in common: interesting history, sun and sea, and typical foods like the ever-popular sobrasada pork sausage. But each island is also a microcosm of its own — so close yet so far from the others. Unlike Canary Islanders, people in the Balearic archipelago identify themselves with their island’s specific name and not collectively.

Among the four islands, Majorca has witnessed the development of mass tourism more than any of its little sisters while Ibiza is the young party place, and once-hippie Formentera is now a summer must for the rich and famous.

What about Menorca? Well, Menorca has the reputation of being the quieter, wilder, better conserved island. It’s the only one to have been occupied by the British in the 18th century, and since 1993, it has earned the title of UNESCO Biosphere Reserve. Nowadays, especially in high season, it’s a solid family beach holiday destination.

But with rural hotels becoming increasingly prominent in recent years, all this might be set to change. This type of accommodation could be the future for the island and a way to diversify tourism and appeal to a different demographic of travelers happy to stay further away from the playa if that still means a slice of Menorcan paradise. Here are the top ones to choose from. 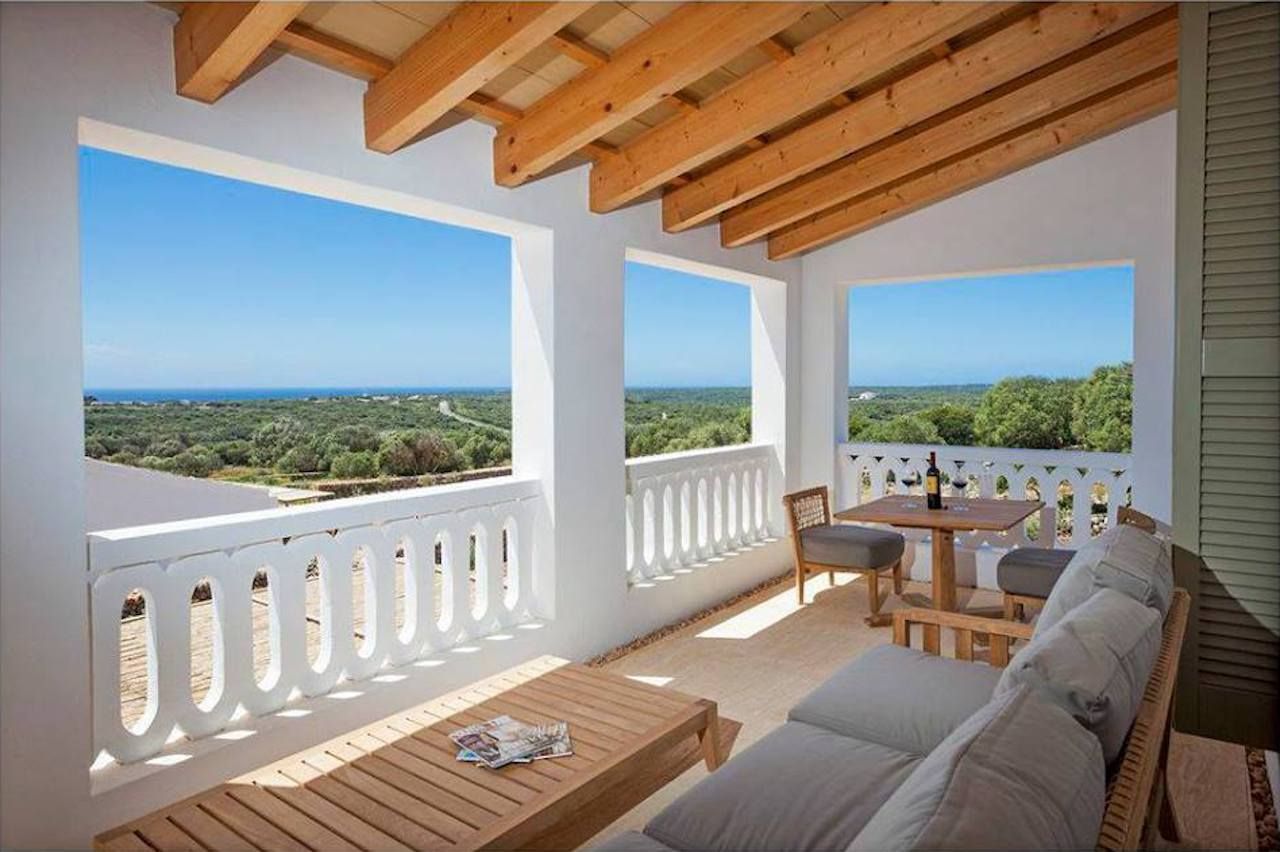 Once a farmhouse, Torralbenc is now a luxurious accommodation less than a 10-minute drive from the popular beach of Cala en Porter on the island’s southern coast. For those who are torn between the joys of the countryside and those of beach life, its location offers the best of both worlds. Inside each room you’ll be welcomed by the scent of rosemary wafting through the air, stylish decor, neutral colors, and exposed-beam ceilings. But if you go for the pool cottage, you’ll also have your own private pool overlooking the Mediterranean Sea, smiling back at you in the distance.

Torralbenc is set in over 170 acres of wide-open countryside with farmland, fields of wildflowers, olive trees, and the characteristic Menorcan dry-stone walls. There’s also a stunning pool with sun terrace, an award-winning restaurant specializing in Basque-influenced Menorcan delicacies, and a wellness center for yoga classes or retreats — so you can say namaste in one of the most rural chic settings of the island.

Room prices in the high season start from $399 per night (including breakfast).

Within easy reach of the village of Es Migjorn Gran, there’s Binigaus Vell, an authentic, restored Menorcan finca that offers a seawater pool and homestyle cooking restaurant. The building stands out from the others listed here because it is immersed in extensive rural areas once used to produce wheat and cheese. Since first opening in 2010, seven new suites with a private pool were added in 2018, and the 27 rooms are distributed between the converted farmers’ property, barn, and cowshed.

What makes this hotel unique is the fact that, reflecting the owners’ passion, it has a stable of Menorquín horses. Among many other activities, the hotel offers guided horse-riding excursions — of various levels and lengths — along the island’s >camí de cavalls. These are 125-mile-long coastal paths covering Menorca’s entire perimeter, divided into 20 marked stages. Once used for defense purposes, they’re now part of Europe’s GR footpaths and one of the best ways to appreciate Menorca’s natural and solitary beauty. If you’re not so keen on horse riding, there are also trails for satisfying hikes near the hotel, the most popular of which leads to Binigaus beach through the Cova d’es Coloms.

Room prices in the high season start from $300 per night (including breakfast). 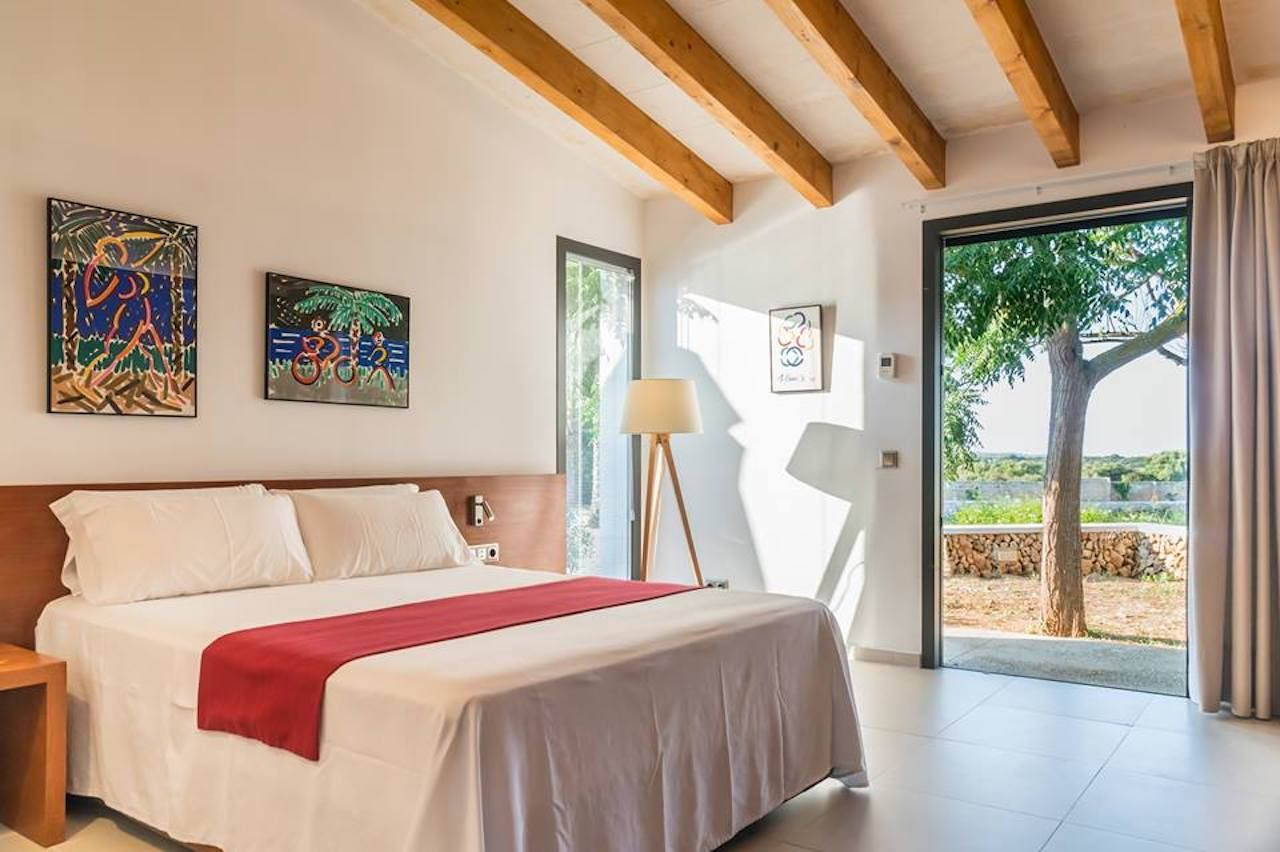 This intimate, boutique, rural hotel is on the eastern end of the island with views of the Port of Mahon. Its concept revolves around sustainable agritourism. The estate of Binissaida includes 30 acres of manicured gardens, reforested areas, fields where flocks of sheep and horses can roam free, and a working farm for the production of Binissaida extra-virgin olive oil, among other things.

The rooms, whose names are inspired by some of the greatest classical music composers, can be as lively as a Mozart piece or as grand as a Beethoven symphony. Hopefully, you fancy yourself a music lover because the hotel hosts nighttime live music events by the pool. The following morning, epicureans can book a Bini Brunch, prepared with fresh organic ingredients from the vegetable garden and seasoned with a pinch of love in the hotel’s gastro restaurant, Ses Forquilles.

Room prices in the high season start from $375 per night (including breakfast). 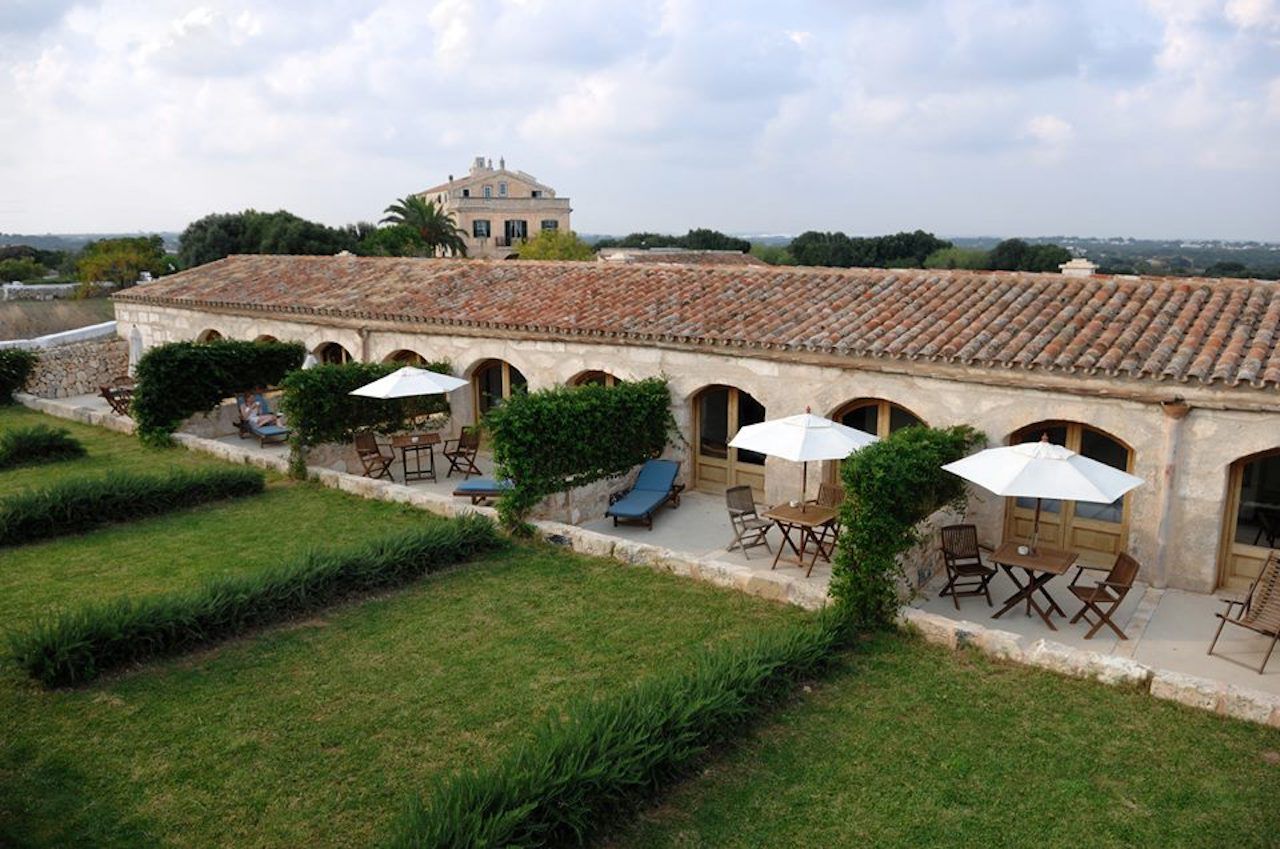 Tucked away in the relaxing countryside near the southeastern beaches of Alcaufar and Punta Prima, Alcaufar Vell has been running since 1998, but its history goes as far back as the 14th century. The main building is a classic Menorcan manor house built in the beautiful marés stone that’s typically found in historical and religious architecture across the island.

The rooms and suites are located both in the manor house and in the annexed buildings. They’re tastefully furnished and, as a bonus, they all feature a jacuzzi bath and free drinks from the minibar. The link to the past at Alcaufar Vell is also apparent when you’re seated at the table, in the shade of the olive trees. Here, you can have the “Secrets of Don Joan” tasting menu, a gastronomical and historical journey to discover Menorcan cuisine and the hotel’s evolution through time.

Room prices in the high season start from $375 per night (including breakfast). 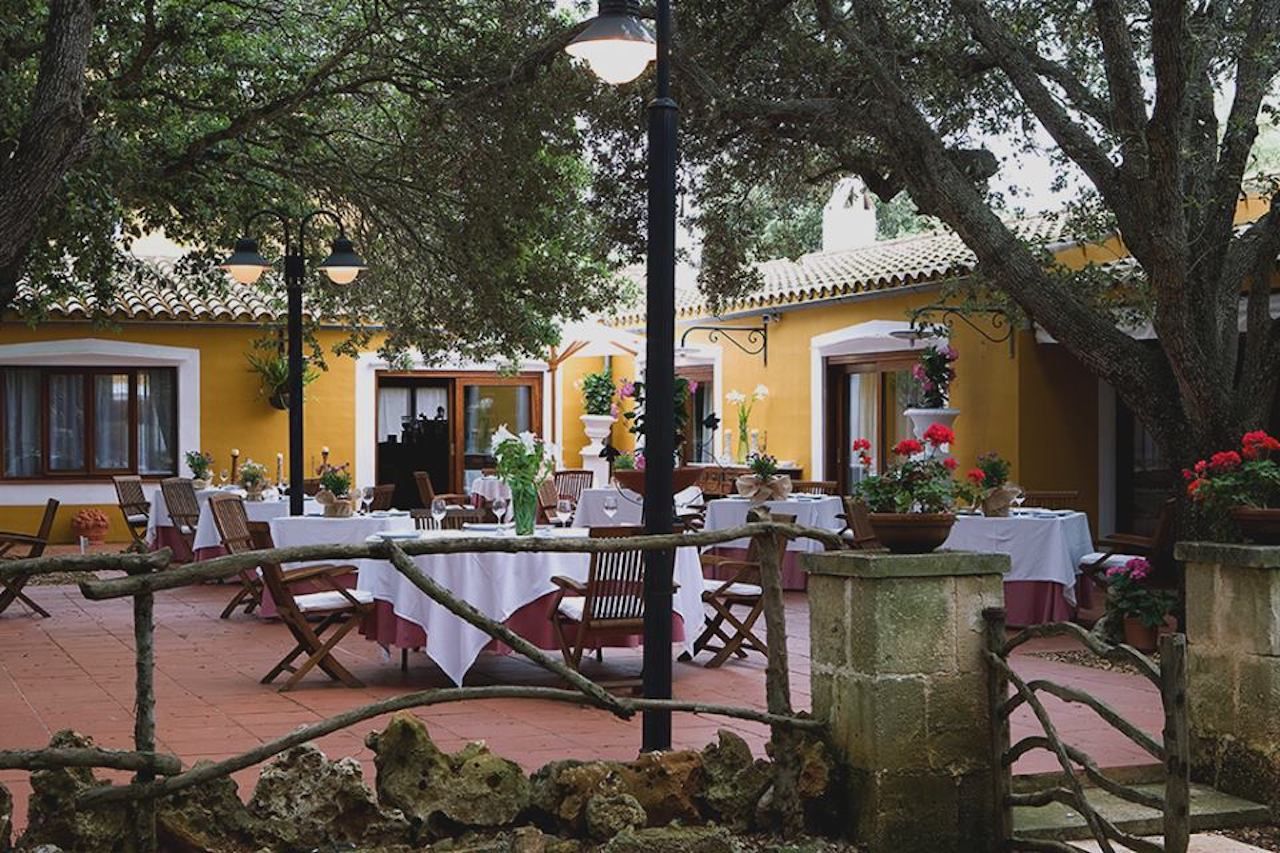 Sant Ignasi is a four-star retreat in the northwest of Menorca, about a 15-minute drive from the buzzing old capital of Ciutadella. Access to the coves and beaches on the northern coast from the hotel is easy, including the rocky Cala Morell or pristine Cala Algaiarens (also called La Vall). The rooms in this hotel are spacious and classy, not lavish. Outside, the stately, mustard-yellow house stands out from the green fairytale-like background, which is home to flora and fauna like centennial holm oak woods, tortoises, and peacocks. Activities range from tennis to massages, or you can just lounge by the pool and contemplate what to have at the candlelit dinner.

Room prices in the high season start from $287 per night (including breakfast). 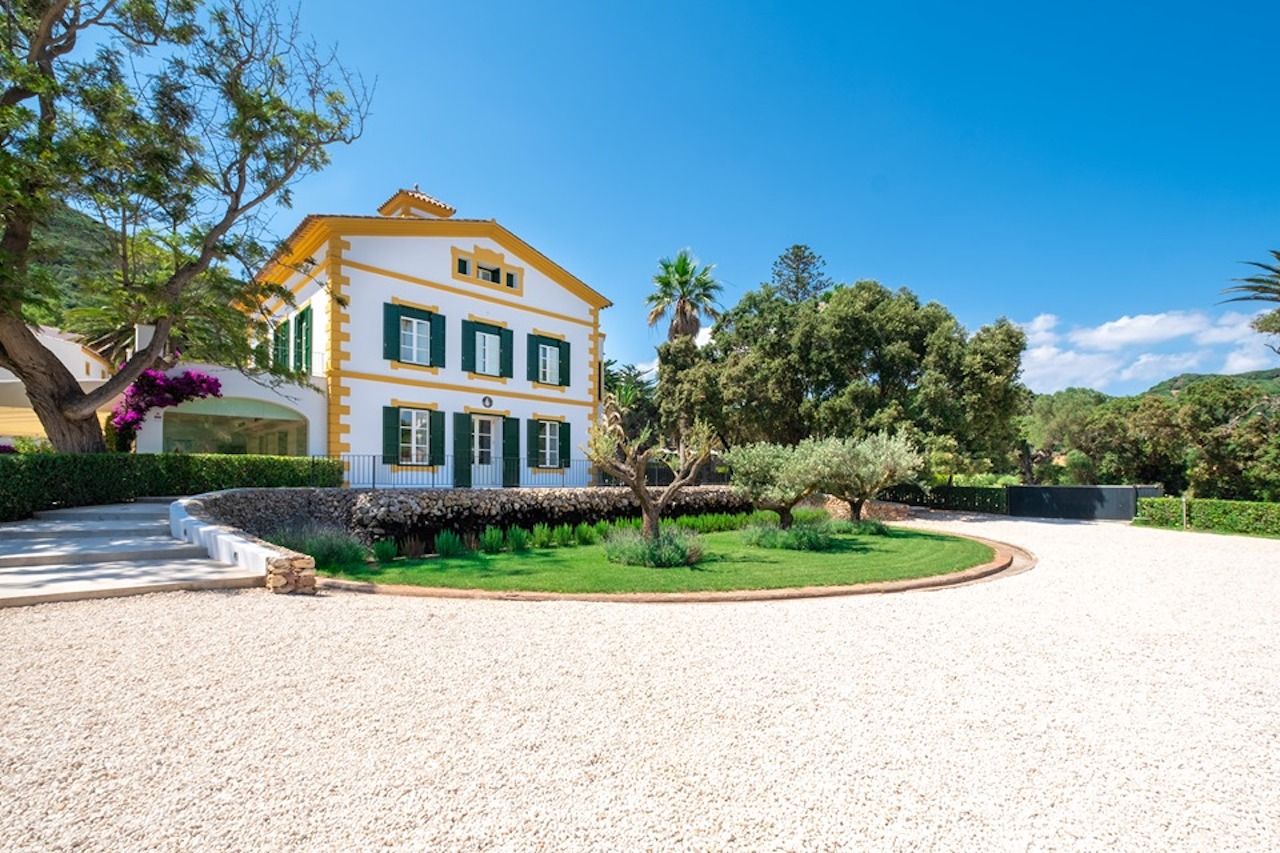 This one is adults-only, located at the center of the island not far from Ferreries. Calling Hort Sant Patrici a rural hotel and restaurant doesn’t exactly do it justice. The main colonial-style house, Ca Na Xini, is surrounded by vineyards, and the property also has a cheese factory and cheese museum-cum-shop. While the style is definitely traditional on the exterior, the eight all-white rooms actually have a contrasting, more modern vibe.

For a true flavor of Menorca, all you have to do is join a guided tour of the winery and cheese factory, which includes a wine and cheese tasting. Hort Sant Patrici is one of the few local wineries, and its merlot, cabernet sauvignon, and shiraz wines have earned the Isla de Menorca-Vino de la Tierra quality label. Together with the wine, DOP Mahon cheese is also produced here from the milk of happy Menorcan cows that graze all year round on iodine-rich grass, which gives this queso its unique taste.

Room prices in the high season start from $248 per night (including breakfast). Adults only. 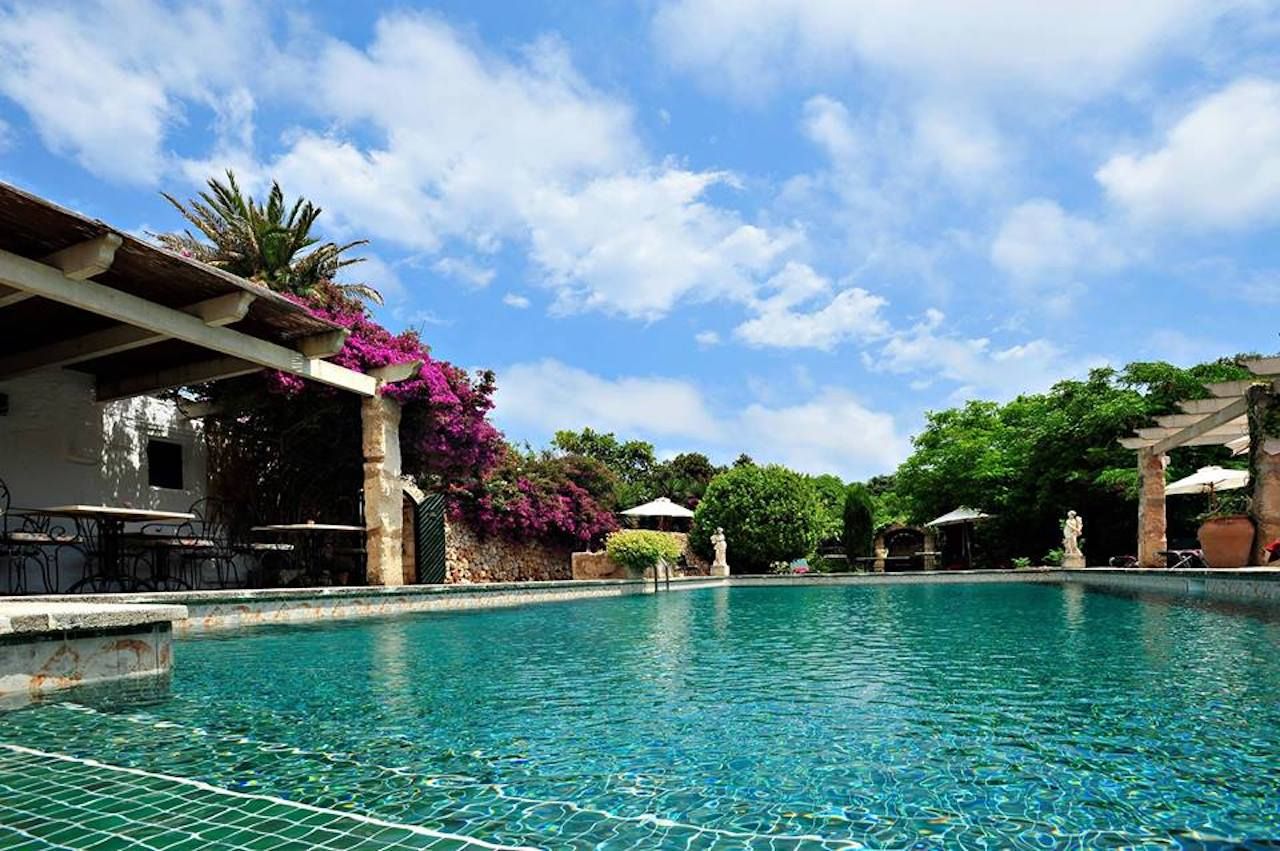 In the southeast corner of Menorca is Biniarroca, very close to the capital Mahon, as well as to the airport. It’s also within walking distance of the town of Sant Lluís. The hotel is for adults only, so there’s no worry of screaming kids waking you up too early. Its romantic setting tends to attract couples more so than partiers to its bougainvillea-covered walls.

The main attractions on site are the neoclassical-style pools set in lush gardens, but there are also breezy chill-out areas and indoor library lounges to shut off your phone and disconnect for a while. The rooms are equally romantic and come with or without terrace or garden access. Fancy yourself a pomada — a refreshing drink made with Menorca’s Xoriguer gin and lemonade — to enjoy in one of these settings. The Biniarroca bistro and restaurant has superb cocktails, sometimes with an innovative twist, as well as Mediterranean and international haute cuisine specialties cooked with locally grown produce.

Room prices in the high season start from $199 per night (including breakfast). Adults only.

Lux TravelWhy You Should Consider the Bathroom Above All Else When Booking a Luxury Hotel
Tagged
Insider Guides Epic Stays Spain
What did you think of this story?
Meh
Good
Awesome