ENTERING THE SANTA MARIA VALLEY, you quickly realize this is the California which has and continues to inspire writers, artists, musicians, and in this case, winemakers. Forget the tangle of freeways and urban pulse of Los Angeles and San Francisco. Here, coastal live oak groves adorned with hanging moss dot the hills. A cool Pacific breeze blows from the west, and an ocean of vineyards rolls to the horizon. It’s not quite Steinbeck country, but it’s pretty damn close.

I’ve driven up this stretch of Highway 101 from Ventura many times. Meandering country roads beckon to be explored, and it feels like life’s frenetic pace fades a little. The medley of vineyards, old cattle ranches, and farms make this part of northern Santa Barbara County one of the most agriculturally diverse regions in the nation.

It’s a place where cattle was once king, first with the vaqueros and later with American wranglers. Nowadays, you’re more likely to find the cowboys tipping back glasses of Pinot Noir. Still, their influence survives in Santa Maria-style barbecue and the pioneering spirit of local vintners. Every time I visit this place, I get the feeling that tradition is respected while new ideas are explored. Here, taking your time isn’t just recommended, it’s encouraged.

But California has numerous world-class wine destinations, so what sets the Santa Maria Valley apart from the crowd? 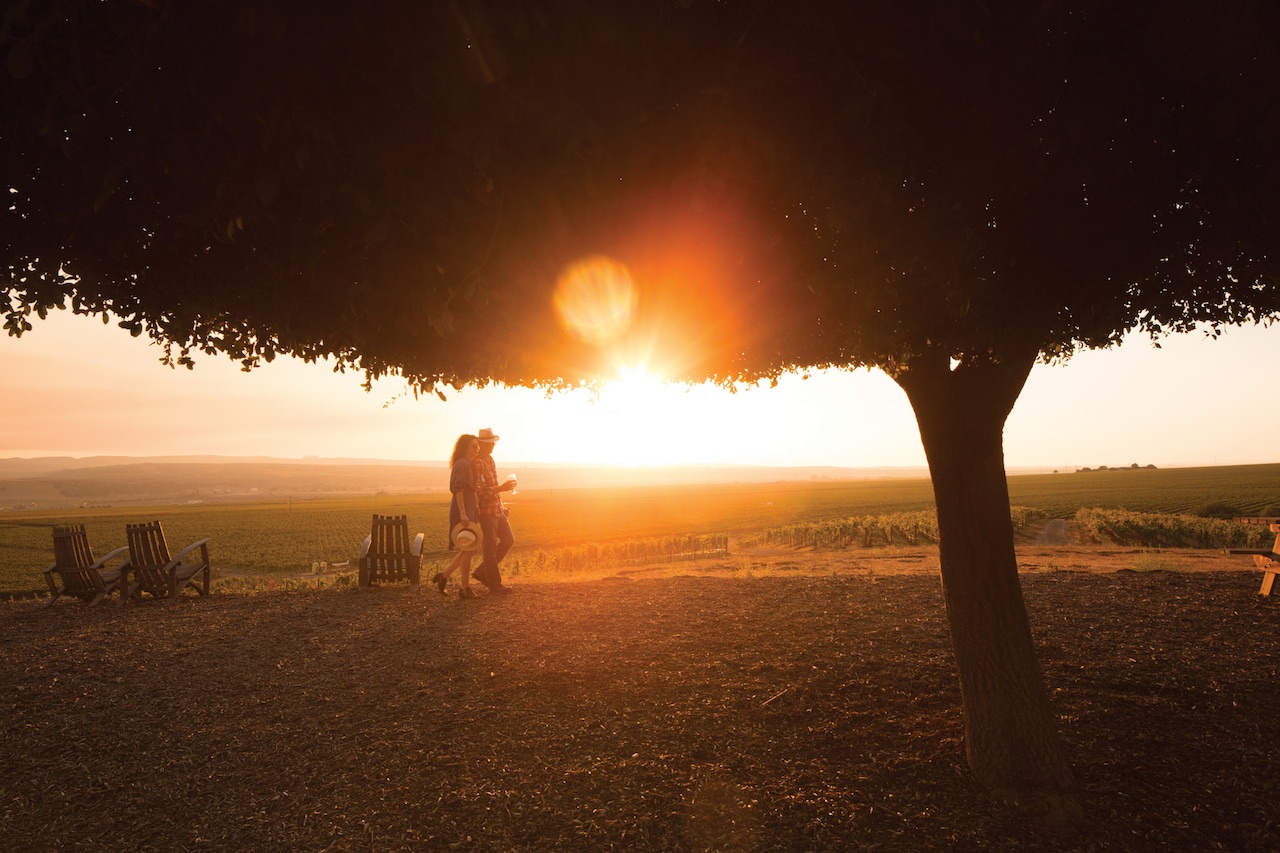 Local winemaking in the Santa Maria Valley goes back to the 1830s when Mexican ranchers grew the region’s first grapes. In the 1960s, commercial wine production began in earnest as local growers began experimenting with various varietals. Though you’d never know it, Santa Maria Valley is the second-oldest American Viticultural Area in California.

And the vines’ literal roots are just as significant. The richly aromatic Pinot Noirs, zesty Chardonnays, and fiery Syrahs coming out of the Santa Maria Valley are largely the result of unique geography. The mountains of this funnel-shaped valley run transversely, meaning the valley opens directly to the Pacific Ocean — and lets that cool marine air and fog float right on in.

Combine this with a Mediterranean climate with warm, dry summers, and you get mild daytime temperatures and one of the longest growing seasons in California. Translation: More time on the vine intensifies flavors and aromas. Mix in a variety of topsoils and various microclimates, and the result is one of the most dynamic appellations on the continent. As the grapes mature in this environment, the fruit develops a rich and complex character unique not just to the region, but to each specific vineyard.

Renowned wine critic Steve Heimoff maintains that these are among the highest quality grapes and wines in the state. Alexander Payne’s 2004 film Sideways, starring Paul Giamatti, featured shots of Santa Maria Valley and its award-winning wineries (though it focused on the nearby Santa Ynez Valley). With such established credentials, it’s surprising so few people know about this corner of the Golden State.

With more than thirty-four wineries and tasting rooms, exploring Santa Maria Valley wine country means getting off the freeway and slowing down. There’s plenty of styles here when it comes to viticulture, from traditional methods to forward-thinking philosophies. The wine made here draws attention from all over the world, yet local wine culture is refreshingly accessible to even newbie tasters. No wonder the Travel Channel named it one of the top new places for wine snobs. There’s no shortage of options, but here are some must-visits if you’re planning your own Santa Maria Valley wine tour:

Solar-powered and sustainable, Foxen Vineyards and Winery was opened in 1985 by locals Bill Wathen and Dick Doré. Foxen wines regularly earns praises from around the globe for its straightforward and minimalist approach, but it’s not just the wine that makes a stop at Foxen worthwhile — it’s the history, too. The 2,000-acre ranch where Foxen is located, Rancho Tinaquaic, has been in Dick’s family since 1837. The first tasting room where Dick and Bill poured wine for visitors, fondly called “the Shack,” was originally an 1860s blacksmith’s shop, and is still open today.

Part of a 37,000-acre cattle ranch, nearby Rancho Sisquoc produces award-winning wines under the guidance of winemaker Sarah Holt Mullins, who grew up on the ranch/vineyard combo. The Chumash Indians called this part of California “Sisquoc,” meaning “gathering place,” and Rancho Sisquoc Winery is hoping to bring that feeling back to the area, with daily offerings in the tasting room, events throughout the season, and welcoming tree-rimmed picnic grounds. Oh, and that charming chapel pictured on the label of all their wines? That’s the San Ramon Chapel, built in 1875 and now a state historical landmark welcoming visitors at the gate to Rancho Sisquoc.

Venturing deeper to where the foothills meet the valley floor, Cambria Wines focuses on sustainable Chardonnay and Pinot Noir. Led by Kendall-Jackson’s Barbara Banke and her daughters Katie and Julia Jackson, the estate’s vineyards date back to the 1970s. Together with winemaker Denise Shurtleff, they create phenomenal wines — and yes, they’re all women. The women of Cambria also run a charity called Seeds of Empowerment, which awards over $100,000 annually in grants and is dedicated to recognizing and encouraging female leadership worldwide.

There’s no shortage of top-notch wine within Santa Maria city limits, either. Just off the 101 at Costa de Oro’s tasting room, many nights start with live music — which makes sense, as winemaker Gary Burke is also a super-skilled blues guitarist. Nearby Golden Bear Winery offers tastings by appointment and is run by relative newcomers who moved to the area a decade ago and quickly fell in love with wine-making. Just down the road in Orcutt, Cnagy Wine Tasting on Gray St. is a good bet for Pinot Blanc and Viogner.

On weekends between May 27 and September 4, hop on the vintage Santa Maria Wine Trolley as it makes its round-trip into wine country. Trips begin from Santa Maria at Town Center West, and stops include Costa de Oro Winery, Presqu’ile Winery, and Cottonwood Canyon Winery.

The passionate people producing wine in the Santa Maria Valley do so with an openness that’s genuinely refreshing. When I visit, I find the winemakers approachable and the atmosphere dressed-down and casual, kind of like being at a party. Of course, no fiesta is complete without great food. Luckily, Santa Maria-style barbecue pairs nicely with local vino.

The barbecue capital of California 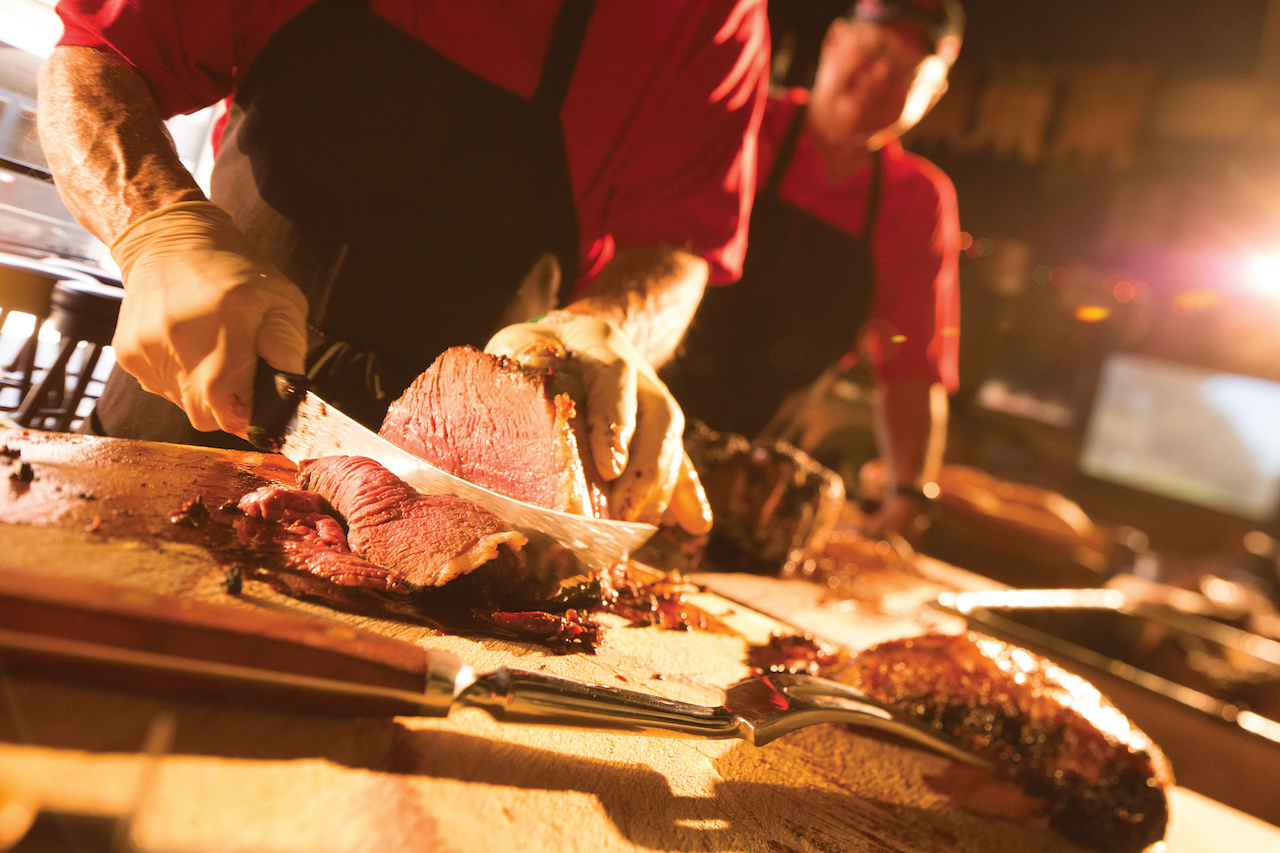 A relatively inexpensive triangular cut of beef from the bottom sirloin, the tri-tip was once considered only worthy of being ground into hamburger meat. In the 1950s, Santa Maria Valley locals seasoned and fired the tri-tip or top sirloin steak, elevating this lowly cut into a California classic. Local service clubs picked up on the idea, and a tradition was born.

You won’t find any sauce with this barbecue. The magic is in the spice rub — which is based around salt, pepper, and garlic — and the cooking process.

Keeping with Santa Maria Valley’s Mexican and cowboy roots, the meat is grilled over an open pit of red-hot, locally sourced red oak. The heat caramelizes the outside of the steak, making for some seriously sweet aromas. Basted with a local red while on the grill, the meat drips with flavor and turns beautifully brown. In my experience, a properly prepared piece of Santa Maria-style barbecue rivals a prime rib any day.

The Central Coast is home to a host of Santa Maria-style eateries, where you can find tri-tip in everything from chili to tacos. Owned by the Ostini family since 1952, The Hitching Post steakhouse is a local institution. They serve Top Sirloin and other cuts in a Western atmosphere (though this saloon features wine, not whiskey). Its sister restaurant — run by an Ostini brother — in Buellton was heavily featured in Sideways. Within the city of Santa Maria, Shaw’s Steakhouse serves a mean tri-tip sandwich in a casual atmosphere. Other valley favorites include The Far Western Tavern, Jocko’s, and Rancho Nipomo BBQ & Cal-Mex.

Affordability on the Pacific 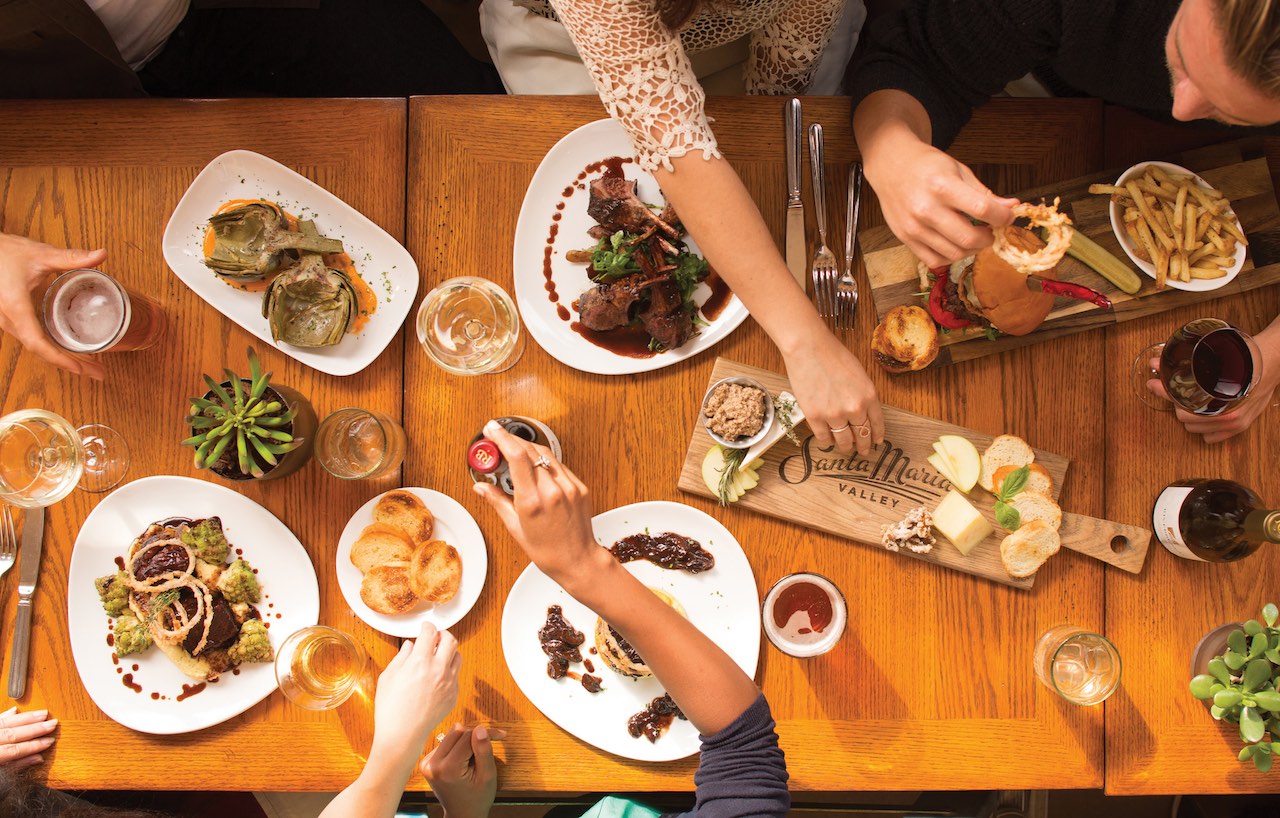 While world-class wine, rural hospitality, and mouth-watering barbecue alone warrant a visit to the Santa Maria Valley, the area is also typically more affordable than other wine country destinations. Rooms are available for under $100 at many hotels. On top of that, you’re a 30-minute drive from the Pacific Ocean and the Guadalupe-Nipomo Dunes, one of the largest dune systems in the state. This park and wildlife refuge is also where Cecil DeMille filmed The Ten Commandments. I don’t recommend trying to part the seas, but it is a great place for a picnic. It’s also worth hiking around nearby Oso Flaco Lake, keeping both eyes and ears out for the songbirds that make their home by the water.

And in Santa Maria itself, there’s always a brilliant event or festival going on. From the theater performances at PCPA to the Strawberry Festival every April (where, yes, admission gets you free strawberry tastings), the three-day-long rodeo in June to Dia De Los Muertos in October, you’ll definitely want to spend time in the city.

1 This giveaway is solely sponsored by Santa Maria Valley and is in no way sponsored or administered by Matador Network.

This post is proudly produced in partnership with Santa Maria Valley.
Tagged
Food + Drink Trip Planning
What did you think of this story?
Meh
Good
Awesome