New Orleans, Charleston, and Savannah: Three beautiful cities, each the quintessential Southern belle. The first is a wild child obsessed with the Blues, perpetually either planning or recovering from a party, and known to have a stormy temper. The second is more prim and proper, at home at debutante balls, country clubs, and preppy cocktail parties. But it’s Savannah — tantalizingly pretty, down-to-earth, and fun-loving — that will make you fall in love the hardest.

The first settlement in colonial Georgia, Savannah lies in the heart of the Low Country, the marshy stretch of coast running from South Carolina into northern Georgia. “The Hostess City of the South” is famous for exuberant St. Patrick’s Day celebrations, haunted houses, and regal Antebellum architecture. According to legend, General William Sherman spared Savannah the fiery fate of other besieged Confederate cities thanks to the persuasion of his mistress, a lady from Savannah who convinced the Union leader that her hometown was too lovely to be destroyed.

A visit today is to see the why Savannah has been so loved throughout history as well as a glimpse into where the city is headed. Case in point: Savannah recently acquired its first WeMoke, a Jeep-like electric vehicle available for streetside rental. WeMokes, open-roofed cruisers that top out at 30 mph, are perfect for leisurely exploring the florid avenues of the Historic District or the bustling shops and restaurants of River Street. With zippy engines and pastel-colored paint jobs, the battery-powered bogies are a hoot to drive. Better yet, WeMokes emit zero emissions and hold promise to reduce the carbon footprint from tourists. 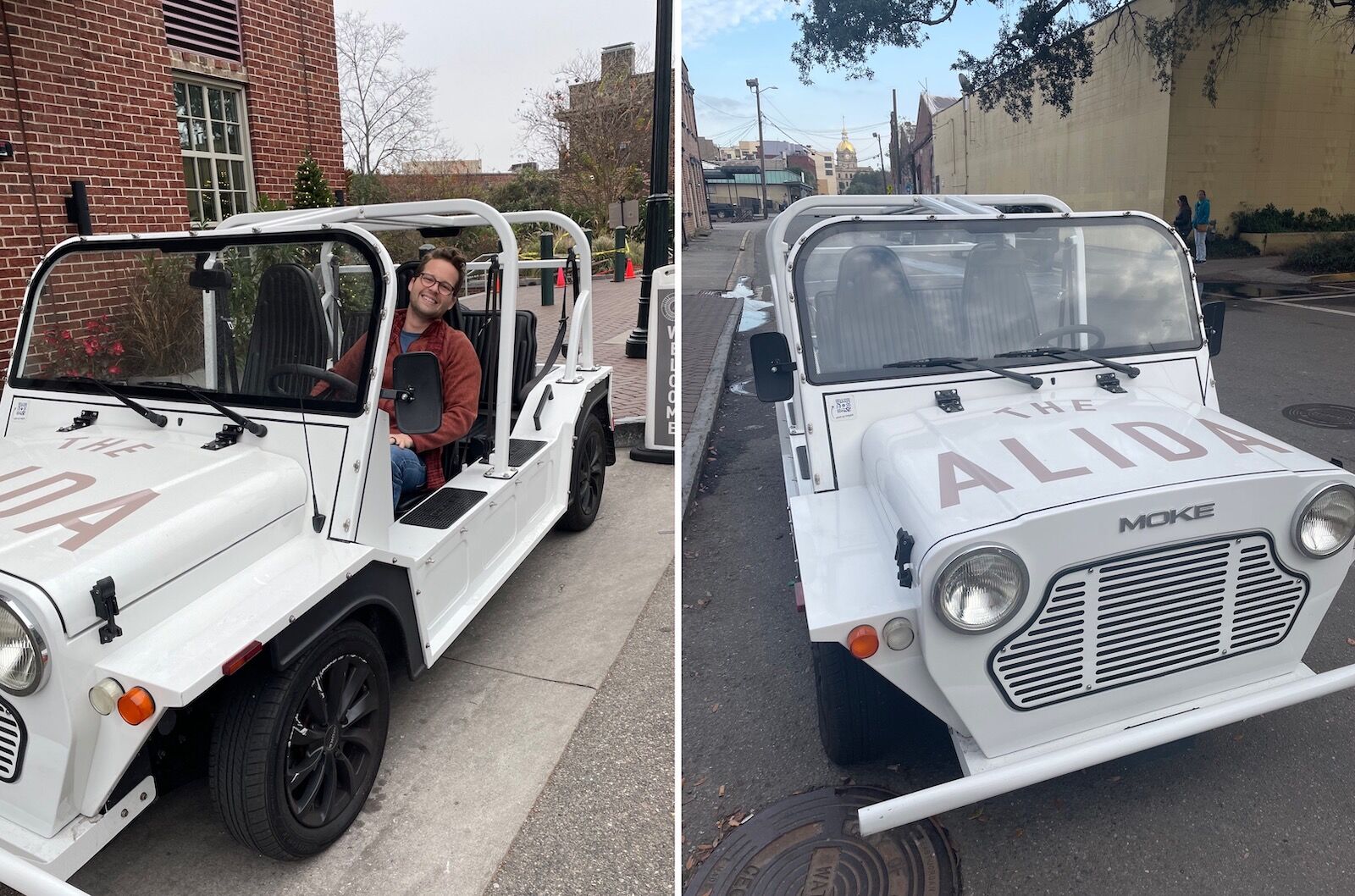 Bejeweled with stately fountains, Spanish moss-draped plazas, and Georgian mansions, Savannah has an aesthetic unlike any other city. If you’ve never visited Savannah before, your first item of business should be to explore River Street and the Historic District, two neighborhoods that showcase the city’s history and distinctive beauty. With a WeMoke, you can cover River Street and the Historic District in a single afternoon, but it’s best to take it in over a couple of days for the full experience. That way, in the spirit of unhurried Southern gentility, you can take your time and pause to savor Savannah’s special charms.

You can rent a WeMoke at the Alida Hotel, a historic building overlooking River Street, even if you’re not a hotel guest. Rentals are available for an hour ($125), the day ($475), or the entire week ($1,989). The rental process, initiated by QR code on the vehicle’s dashboard, takes about 10 minutes to complete. Just input your driver’s license information, sign a waiver, and add a payment method.

Historic sites you don’t want to miss in Savannah

You might recognize Forsyth Park from the opening scenes of Midnight in the Garden of Good & Evil, a classic film about Savannah that’s based on John Berendt’s murder-mystery novel. Canopied by ancient live oak trees, the park’s central fountain is one of Savannah’s most photographed landmarks, as well as the most popular spot for marriage proposals. The city has deep Irish roots and Savannahians dye the water of Forsyth Fountain green every St. Patrick’s Day. Spend at least half an hour in the park reading the plaques, admiring the fountain and statues, and people-watching.

Savannah is a town that treasures the visual arts, with the Savannah College of Art and Design (SCAD) attracting talented artists from around the world. A single ticket grants access to the Telfair Academy, the Jepson Center, and the Owens-Thomas House — three of Savannah’s most famous museums. The Jepson Center, an avant-garde masterpiece by world-renowned architect Moshe Safdie, houses mainly modern art. The Telfair Academy is more classically oriented, showcasing art from Greece and Rome, including an impressive replica of the Dying Gaul. The Owens-Thomas House is a historically preserved antebellum mansion. The museum allows us a glimpse of the luxurious lives of the Old South’s aristocracy but also does a commendable job telling the stories of the enslaved people upon whom such ostentation depended.

Savannah’s bustling port was the city’s raison-d’etre in the 18th century, and many of the oldest buildings are on River Street, the cobblestone avenue along the Savannah River. Beneath River Street’s many bars, shops, and restaurants lies a network of underground tunnels once used for transporting goods to ships. During plague times, however, these subterranean corridors funneled corpses instead of wares out of the city. To this day, Savannahians claim that the tunnels (accessible if you know the right bartender) remain ferociously haunted. River Street is two miles long, a length you can cover in about 20 minutes on a WeMoke. When you pass River Street Sweets, the heavenly aromas of caramel and vanilla will probably force you to a hard stop. The old-fashioned confectioner makes some of the best pralines this side of New Orleans.

Winston Churchill famously proclaimed Boston’s Commonwealth Avenue as “the grandest boulevard in North America,” but if the British Bulldog had visited Savannah, he might have reserved this praise for Jones Street. With interlacing live oak branches, rows of magnificent antebellum townhouses, and delicate gardens behind wrought iron fences, Jones Street could have been lifted from the pages of Gone with the Wind. Among the handsome brick homes is Mrs. Wilke’s Dining Room, where you can enjoy one of the most delectable spreads in the South. Serving the same family-style lunch every day since 1943, Mrs. Wilke’s doesn’t have a menu. Instead of ordering á la carte, patrons sit down at communal tables piled with plates of exquisite Southern fare like fried okra, black-eyed peas, mac ‘n cheese, and—Heavens to Betsy!—the most scrumptious fried chicken you’ll ever taste.

About four miles from the Historic District is Bonaventure Cemetery. Established in 1854 as a final resting place for aristocrat Savannahians, this necropolis on the banks of the Wilmington River became one of the most famous cemeteries in the nation after the release of Midnight in the Garden of Good & Evil. To walk along the riverbank at Bonaventure, especially at sunset, is to be hypnotized by the beauty of the Low Country. Equally moving are the cemetery’s ornate sepulchers and funerary art. (Note that if you’re traveling by WeMoke, you’ll need to hail a rideshare or taxi as the route requires a highway.)

Where to eat and drink in Savannah

Savannah, like New Orleans, embraces the epicurean spirit with gusto. From French-inspired white-tablecloth dinners to chicken n’ biscuits served up in diners, you can find fabulous meals in ever price range in Savannah. For lovers of quality libations, the colonial city, riddled with secret chambers and narrow alleyways, boasts more than its fair share of speakeasies.

To acquaint yourself with quintessential Low Country cooking, book a reservation at Rhett. As with most Southern cuisine, Low Country fare favors ingredients like grits, pickles, and pork, but the star here is fresh seafood. If you’re with a group, order the seafood tower, heaped high with succulent shrimp, oysters, and crab claws. Shrimp ‘n grits might be the most well-known Low Country dish, and Rhett enlivens this classic with andouille sausage and a hit of bright green scallion oil. Rhett’s liquid offerings match the high quality of the food, and in addition to excellent cocktails, the bar has an admirable selection of craft beer from around Georgia. 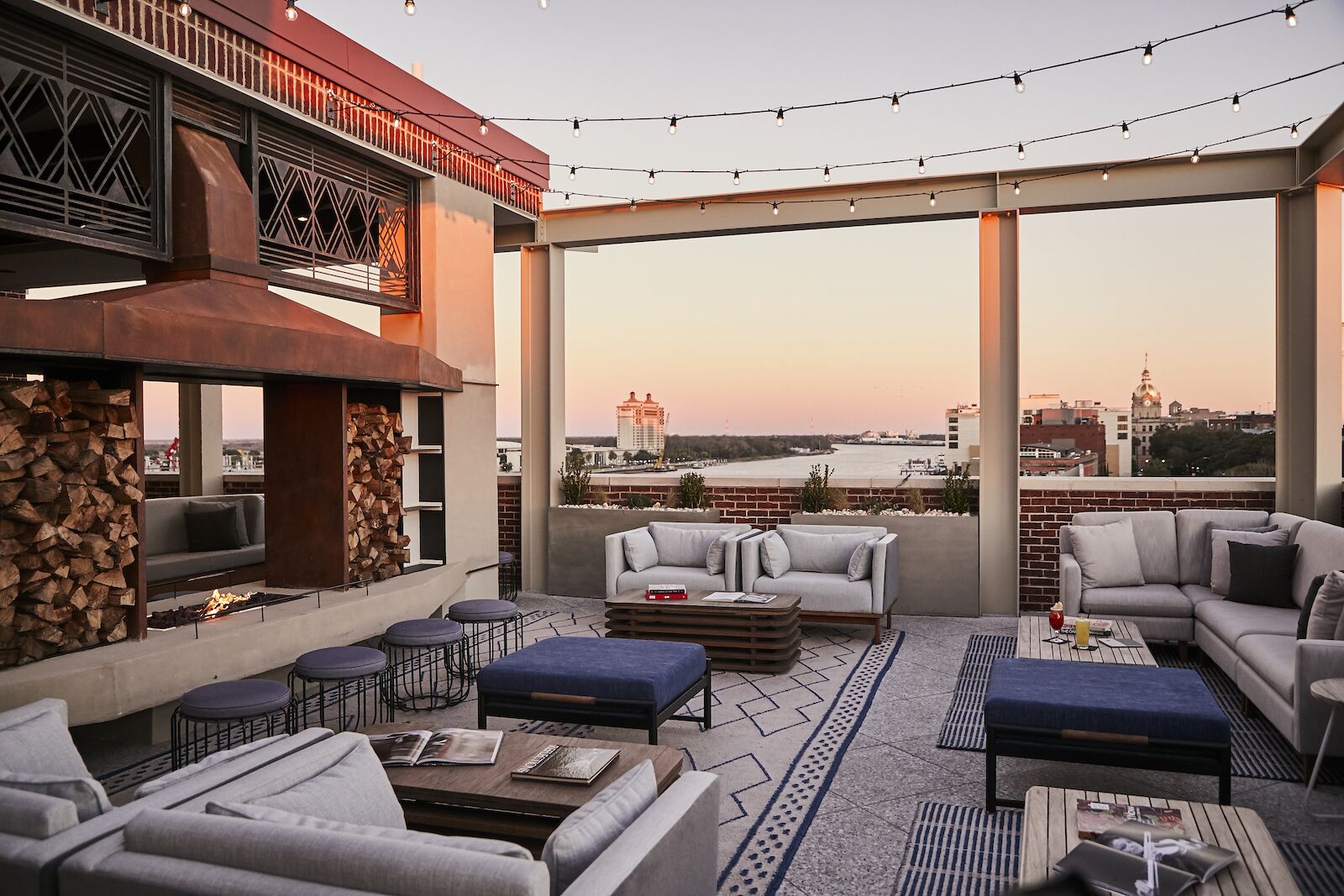 At The Lost Square, a bar on the Alida Hotel’s rooftop, you can sip craft cocktails in front of stunning views of the Savannah River. During the winter, patrons cozy up on couches next to outdoor fireplaces. If you’re a whisky aficionado, head downstairs to the buzzy Trade Room Bar in the hotel’s lobby. The expert bartenders make all manner of classic whiskey-based concoctions, and the impressive menu features rare bourbons from around the South as well as from Japan and Scotland.

Underneath Flock to the Wok, a popular Chinese restaurant on Whitaker Street, is Peacock Lounge, a favorite Savannah speakeasy. Perfect for a date, Peacock Lounge checks all the boxes for a good speakeasy: dark wood paneling, plush leather couches, and adroit bartenders whose love for high-quality spirits is palpable. While you don’t need a reservation for Peacock Lounge, space is limited. If there’s a line, put your name on the list and enjoy some soup dumplings upstairs at Flock to the Wok while you wait for a seat. 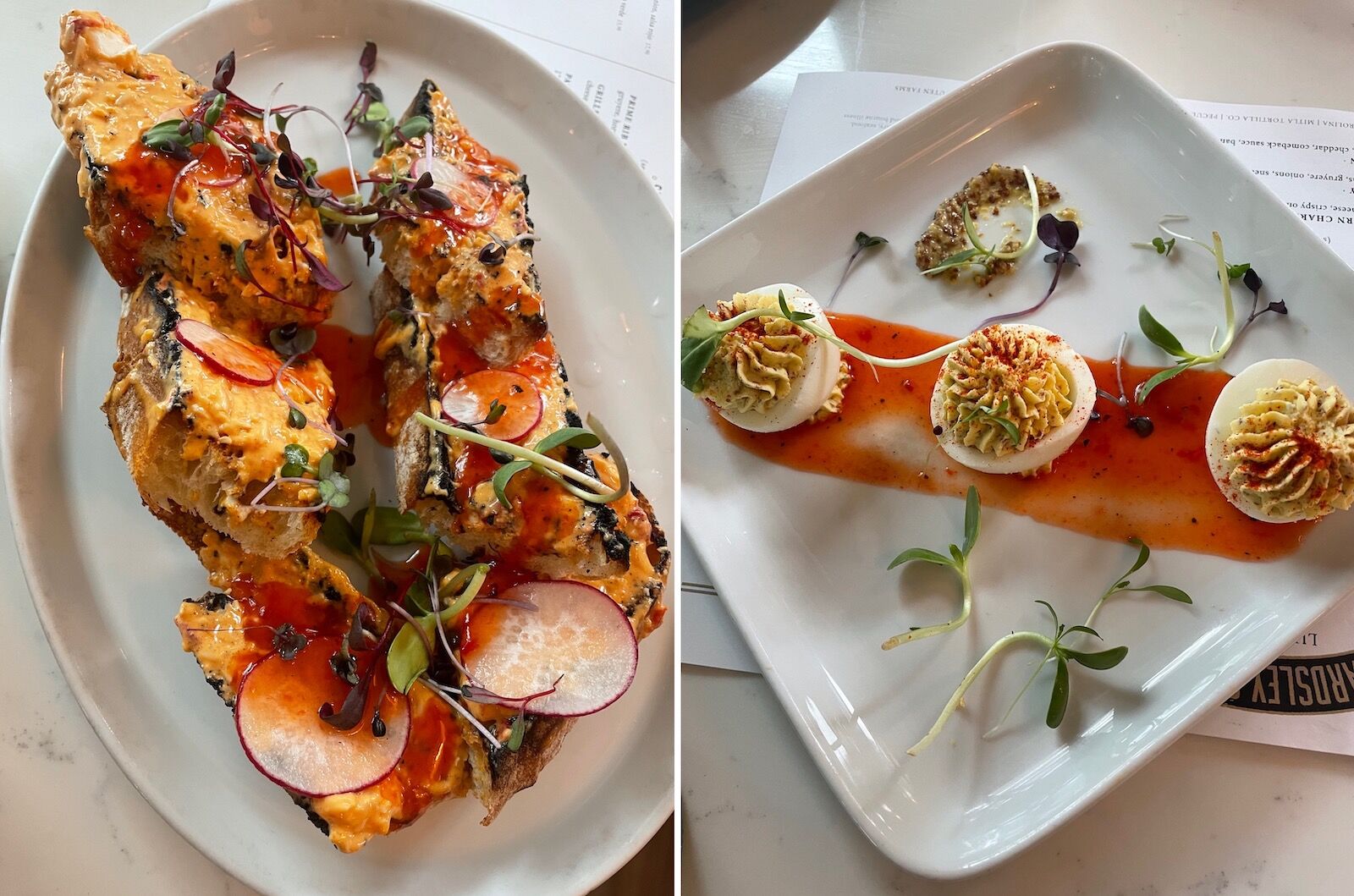 Named after a gas station that occupied its premises for decades, Ardsley Station serves up Low Country fare with a gourmet twist. The small menu, highlighting seasonal and local ingredients, changes frequently, but down-home staples like pimento cheese, fried chicken, and deviled eggs stay on the menu year-round. The chefs at Ardsley Station keep a smoker burning throughout the day, and the smoked pastrami Reuben is a standout. Also, dining at Ardsley Station is also a great excuse to explore the quaint Victory Heights neighborhood, well removed from Savannah’s tourist track.

Where to Stay in Savannah

The Alida Hotel marries old-school Southern charm with top-notch modern amenities like lightning-fast WiFi, outdoor fire pits, and a well-equipped gym. Named after Alida Harper Fowlkes, a local who campaigned tirelessly to preserve her city’s historic architecture, the Alida charms with minimalist decorations, exposed brick walls, and tile floors. Rooms, comfortable and quiet, will run you about $250 per night. Rhett, Lost Square, and the Trade Room are all located on the property. Overlooking the Savannah River, the elegant Alida is within striking distance of River Street and the Historic District. If you choose to explore Savannah via WeMoke, the vehicle’s home base is the Alida’s front entrance.

Tagged
Sustainability Insider Guides
What did you think of this story?
Meh
Good
Awesome

These Airbnbs in Savannah, Georgia, Put You Close To Downtown, the River, and the Beach

14 Ways To Humiliate Yourself in Savannah

28 Signs You Learned To Drink in Savannah

10 Side Effects of Living in Savannah

On Having Offended God in Savannah, GA

Fall Fun in the South: The Savannah Film Festival