You may have seen the sights in Vancouver and skied in Whistler traveling the photogenic Sea to Sky Highway — but, if you’re like too many travelers, you may have never stopped to take in the sights along the way. Or you haven’t made it past Whistler to experience the wilderness due north.

British Columbia’s Coast Mountains are a beautiful region to explore and are quite accessible from the Sea to Sky Highway that runs from Horseshoe Bay through Squamish to the charming town of Pemberton — traversing some of the most stunning terrain in Canada. Here are some of the best-kept, and not-so-well-kept, secrets along the Sea to Sky, including rustic hot springs, hiking trails leading to pristine lakes and mountain huts, and waterfalls that take your breath away. 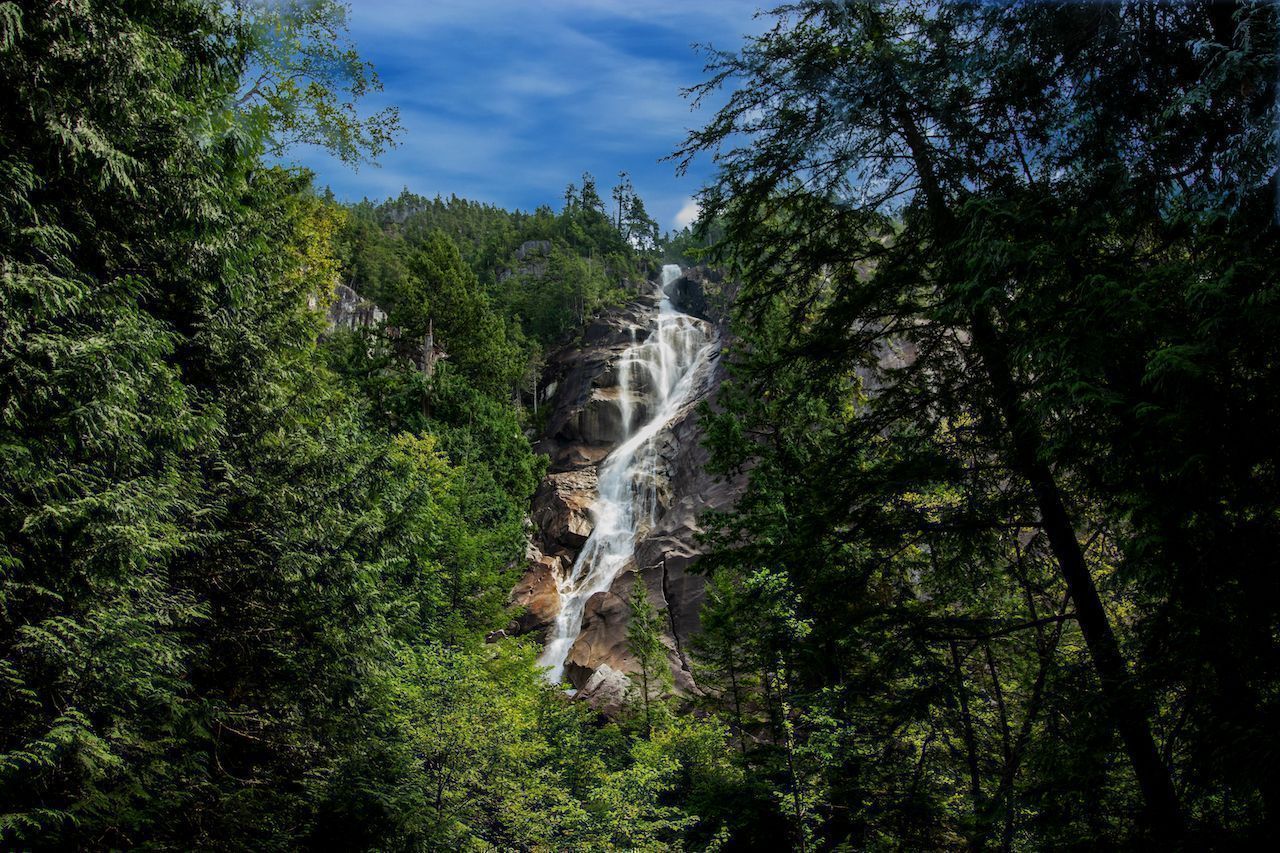 If you’re a frequent visitor to Squamish or Whistler, you’ve driven past Shannon Falls Provincial Park numerous times. The park is just over a mile outside of Squamish and is home to the third-highest waterfall in the province, which cascades down nearly 1,100 feet. The falls are reachable from the main parking area, the Sea to Sky Gondola lot, and the Stawamus Chief lot. After a short half-mile hike in you’re at the falls. Take some time to scramble about in the boulders near the base, where you can witness the thundering falls in all of their glory. Accessible at pretty much every point during the year, Shannon Falls is an excellent detour while on your way through Squamish. 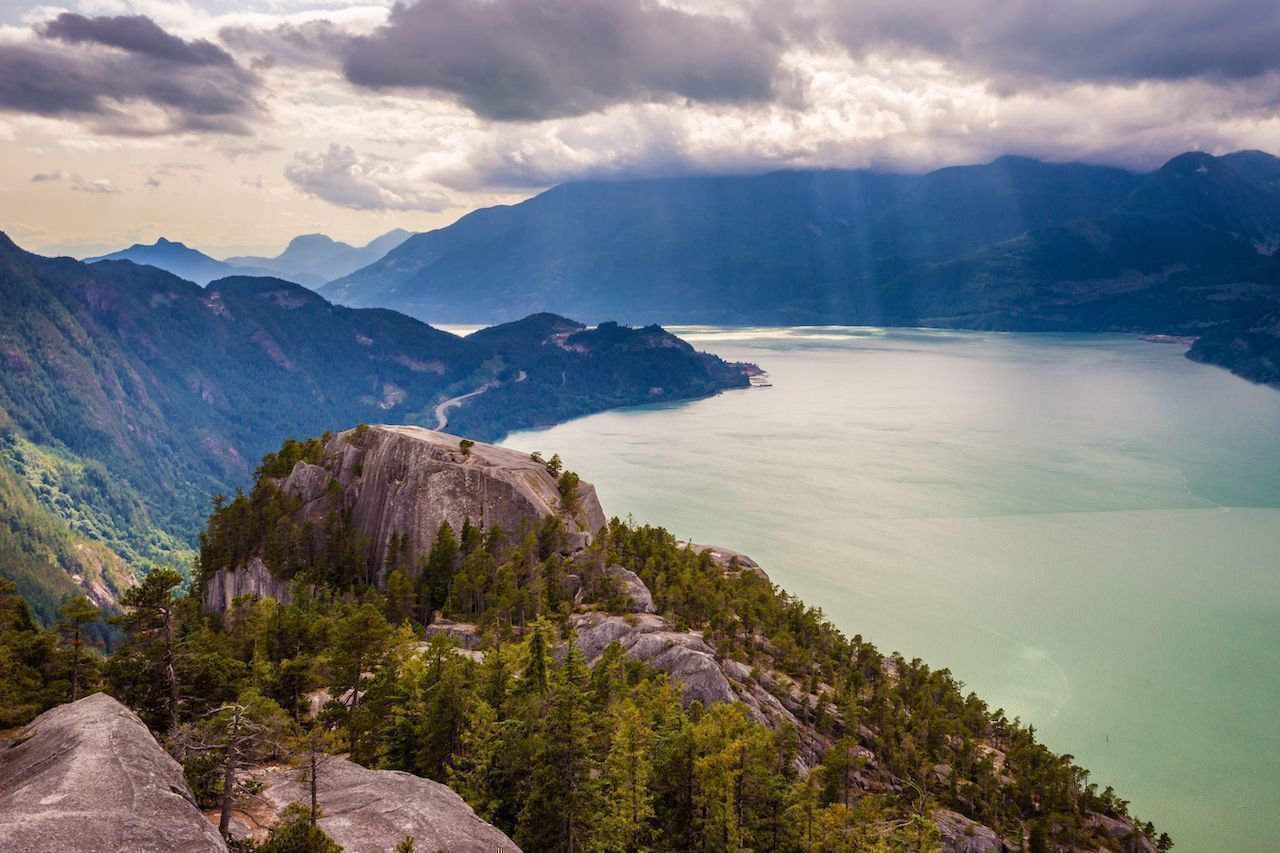 Some gritty folks might enjoy a trip up to Stawamus Chief for the sheer challenge of it. For the rest of us, the grind is fortunately rewarded with sweeping views of Squamish, the waters of Howe Sound, and the stunning peaks of the Coast Mountains. Standing at the summit of The Chief gives a great sense as to why the Sea to Sky Highway is named as such.

The hike to the first peak takes about 90 minutes and is largely on wooden stairs. On the way up, take note of the brightly streaked orange and red rock to your left, with moss crawling in the crevices and water dripping from the forest above. Once you’ve cleared the stairs, you will find the forest opening up to reveal the solid granite beneath your feet. This granite monolith is one of the largest in the world, attracting rock climbers from across North America.

The overall elevation gain is about 1,600 feet to the first peak, which is where the majority of people turn back. If you’re feeling ambitious, you can choose to summit the second and third peaks, which top out at 1,940 feet and 2,070 feet, respectively.

The Stawamus Chief parking is just a mile and a half from the Squamish historic center. Afterward, you can reward your hard work with a stop at Sunny Chibas in Squamish. Formerly known as Mag’s 99, Sunny Chibas is sure to satisfy by carrying on the Mag’s 99 legacy of fried chicken and Mexican food. The brightly painted eatery is easy to spot from the highway and never fails to disappoint. Our recommended order is a two-piece Chiba pack and the crispy corn fish tacos. You’d be surprised how well the two pair together. While the lines can be long, the wait is worth it. 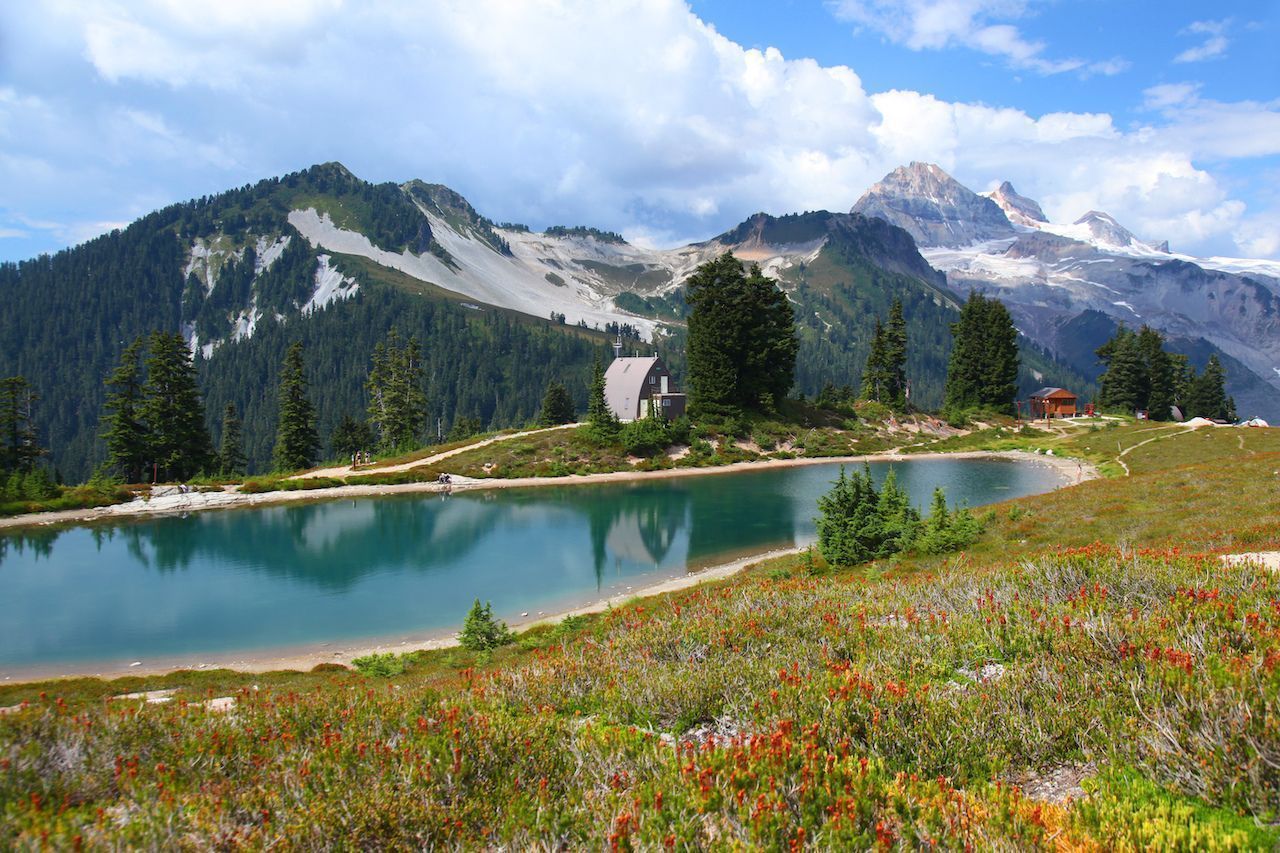 This hike to Elfin Lakes is not one of the better secrets of the region, but that doesn’t mean that it’s not worth a visit. The six-mile trail starts at the end of the Diamond Head parking lot, which is a one hour and 30-minute drive north from Vancouver (or about an hour south of Whistler). Without stopping, you could get to the lake and back in about five hours — but you’ll want to stop and picnic by the lakes.

The trail is moderate and is suitable for families willing to take on the challenge. The first part of it winds along an old road through the forest, which eventually rises to the Red Heather Meadows shelter. Continuing on from there, the forest gives way to vibrant subalpine meadows beneath the imposing figures of the surrounding mountains. After continuing along the ridge for a while, the trail dips back down to end at Elfin Lakes.

There is a shelter nestled in between a few trees between the two lakes, and tent pads are available for those looking to make the trip an overnight endeavor. The views from the lakes are absolutely stunning, showing off the striking character of the Coast Mountains. If you complete the hike in September or October, the crisp bite of fall will be in the air, and snow will have dusted the surrounding peaks. Even if you don’t picnic, at least bring a thermos of hot chocolate to sip next to the lakes and take a moment to wonder how you got so lucky. 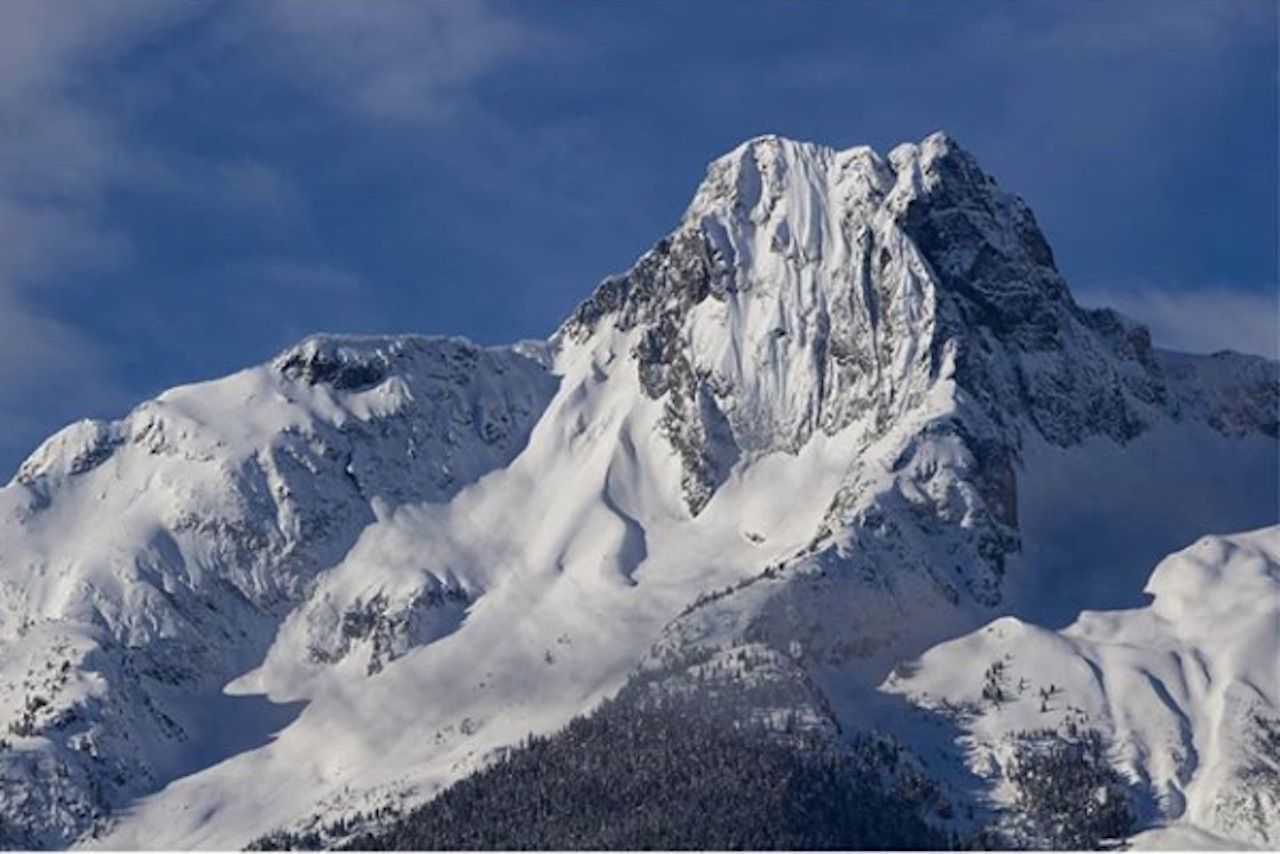 Previously known as the Skookumchuk hot springs, the T’sek Hot Springs is an easy day trip from Whistler (one hour and 45 minutes) and a slightly longer one from Vancouver (three and hours 15 minutes). The hot springs are accessible via In-SHUCK-ch Forest Service Road (FSR), which ties into the Sea to Sky about 11 miles outside of Pemberton. Taking the FSR for 30 miles will bring you to the T’sek campground and springs. The road is usually in pretty good shape and is driveable in all seasons, but caution should be used following heavy snowfall in the area.

Along the way, there are several notable sights. At the southern end of Lillooet Lake, the formidable mountain In-SHUCK-Ch — also known as Gunsight Peak for the distinctive notch at its summit — dominates the skyline and inspires a sense of awe. Later along the road, to your right as you’re headed to the springs, is a rather curious cemetery. Aptly titled “Graveyard” on the arch over the entrance, it is where several generations of families who settled in the area have been laid to rest.

Once you arrive at the T’sek springs themselves, you will find sites available for camping as well as a day-use parking area. The hot springs are sacred to the In-SHUCK-ch and St’át’imc people, and as such, proper respect should be afforded when visiting them. Alcohol and glass are strictly prohibited while using the springs. There are fees associated for both day and overnight use, but they are very reasonable at $5.70 per adult for the day or $7.50 per vehicle per night. There are 12 tubs available in total, many of which allow for temperature control. The overall ambience of the hot springs is one of peace and serenity. A strong sense of connection with nature and the land is found by those who are willing to seek it during their visit. 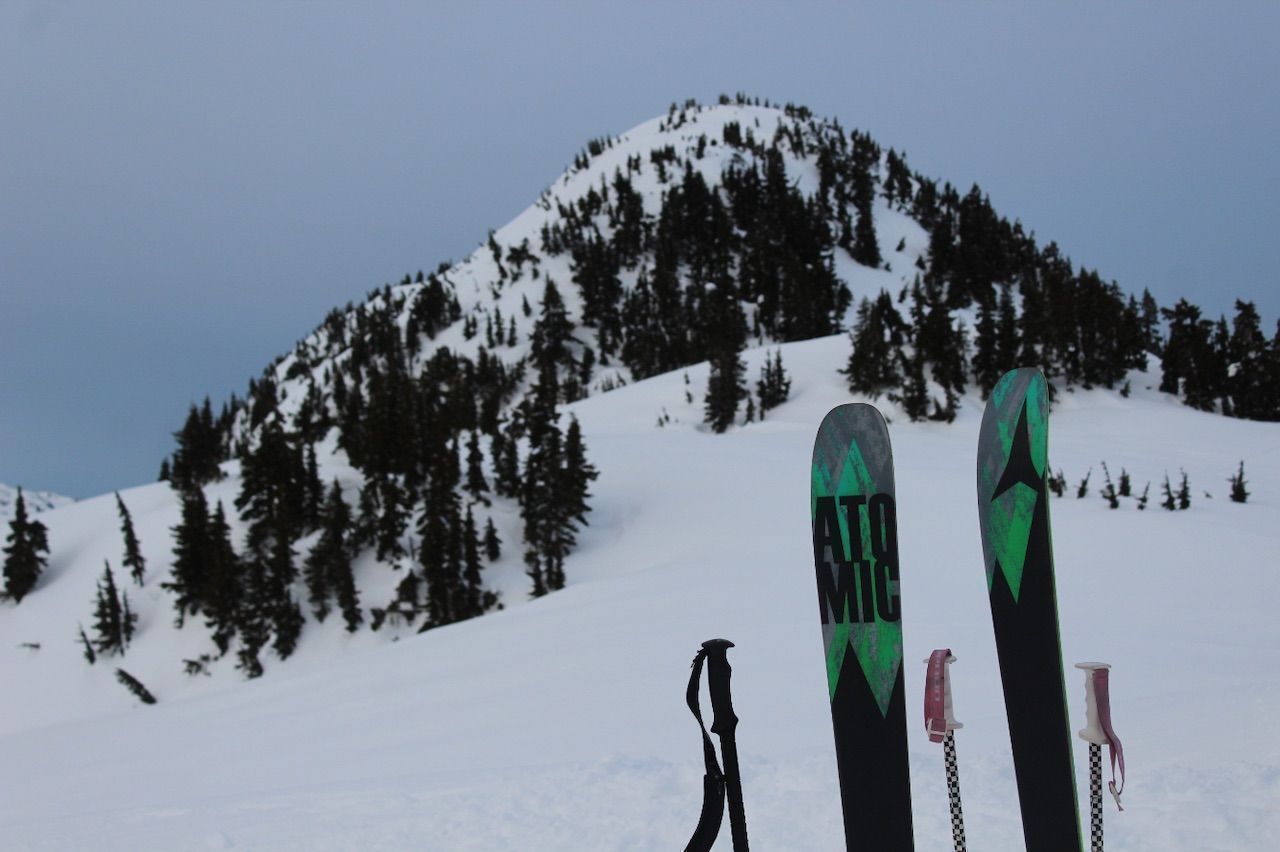 Mount Brew is located about 11 miles southwest of Whistler. Leaving from downtown Vancouver, take Highway 99 North for about one hour and 15 minutes to Chance Creek Forest Service Road. Take a left here and follow the road for one mile until you reach a large switchback heading up to the left. There are some facilities at this point that are used by a local cat skiing company in the winter. If you’re hiking in the summer, you’re good to drive on another 0.9 miles, taking a right at the fork. In the winter, you will likely have to park at the bottom of the switchback and gear up. The trail starts off the R200 Branch of the Roe Creek Road in the middle of a cut-block.

The trail meanders around the ridge along a bench, dipping in and out of the forest. Eventually, the trail opens up into meadows just south of Brew Lake. From the meadows, the trail heads up into the alpine and winds through the boulder fields. Continuing past Upper Brew Lake, the trail heads towards the saddle of the bowl. At this point, Brew Hut is only a few hundred feet more up the ridge.

If you’d like to stay the night, the UBC Varsity Outdoor Club (VOC) maintains a hut that is available to the public just south of Mount Brew. You can stay in the hut for a fee of $7.60 per night, which can be paid in the box inside of the hut. The money that is collected is used by the VOC for hut maintenance.

If you’re just up for a quick single-day jaunt, then continue up the ridge toward the summit of Mount Brew. There is no marked trail here, but in conditions with good visibility, the route is easy to navigate. On your way back down, consider taking a dip in Brew Lake. Though a bit shallow and muddy along the shore, it’s good for swimming in the summer. The best spot to hop in is right near the outlet of the lake where it pours into Brandywine Falls.