El Paso is a frontier city. Situated in the westernmost tip of Texas, El Paso is a 600-mile drive through a dry, desert landscape to the state capital of Austin. With a towering backdrop of the Franklin Mountains on one side and the Rio Grande border on the other, it’s a city molded by its natural boundaries.

True to its name, El Paso is an international passageway, connecting Texas to the Mexican city of Ciudad Juarez. In 2007, The New York Times reported that “the El Paso-Juárez region is the largest bilingual, binational work force in the Western Hemisphere.” El Paso’s fusion cuisine, which combines Tex-Mex flair with traditional Mexican flavors and ingredients from neighboring New Mexico, reflects the city’s reputation as a welcoming stop for immigrants, laborers, and travelers — and everyone else just passing through for a bite to eat.

As a consequence of its position on the Texas-Mexico border, El Paso was a Mexican town until Texas became part of the Union in 1845. The opening of Fort Bliss and the western railroads attracted military men, migrant workers, and lawless cowboys to El Paso, who all contributed to a Wild West boomtown. Today, the city is home to one of the largest populations of Hispanic people in America. 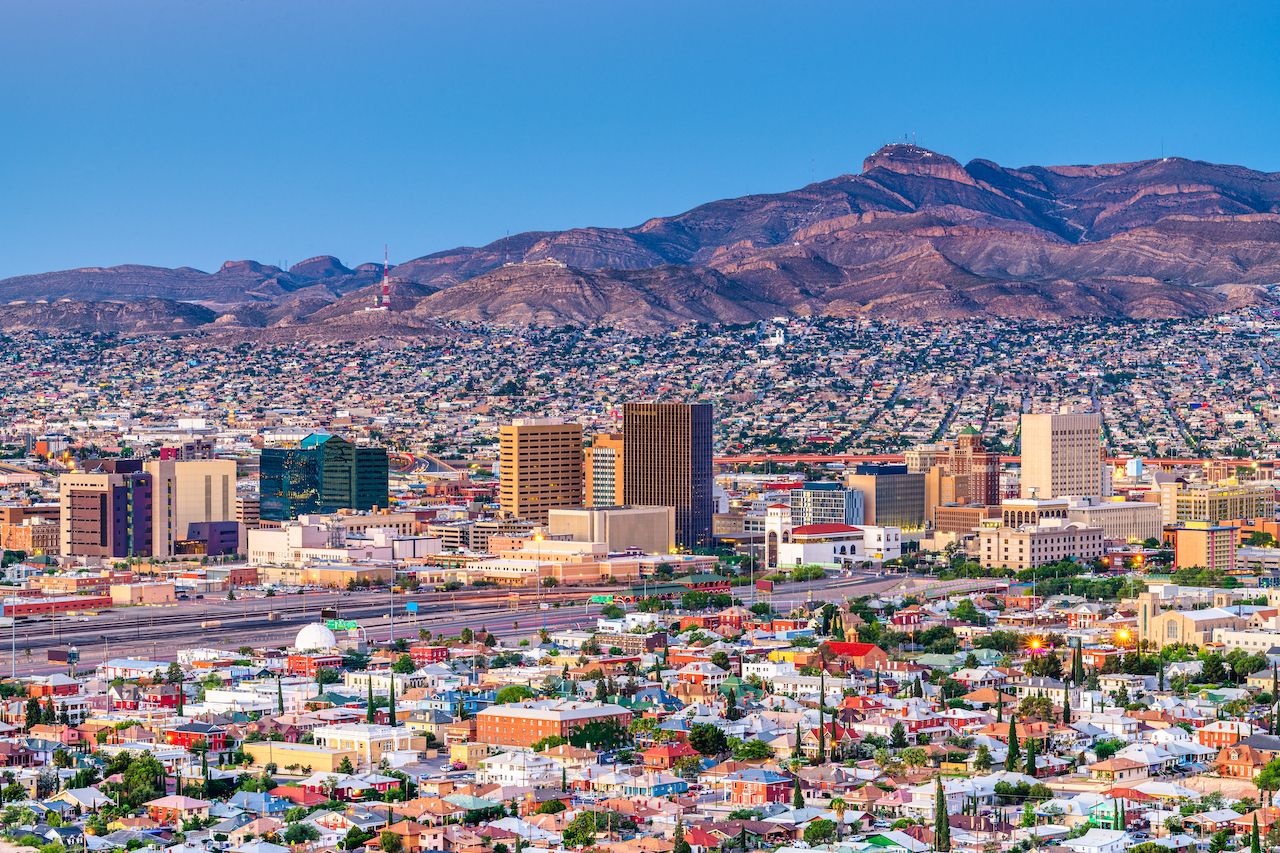 Despite the drawing of the Rio Grande international boundary, the river always remained more of a political distinction than a cultural one. Bars bloomed in Juarez during Prohibition, attracting American drinkers who were suddenly banned from their favorite establishments back home, and many of El Paso’s most famous restaurants have operated on both sides of the border. That strong cross-border connection can be seen in the food today.

Sun City’s cuisine blurs the flavors of Tex-Mex further into Mex territory, combined with a spicy whiff of nearby New Mexico’s fragrant chilies and a heavy pour of Texas cowboy culture in saloon environs that feature a lengthy selection of cold beer and spirits. Expect hearty meat and cheese fare that’s heavily influenced by the foods of the state of Chihuahua across the border.

The influence of Mexican culture is what defines El Paso’s culinary scene, and it remains a hub of restaurants that serve traditional and modern twists on Mexican dishes. Here are eight of the most popular and beloved Mexican dishes to try in El Paso.

Whether you call them vaqueros or cowboys, both Chihuahua and Texas share the same open-range cattle culture. Although pork is popular throughout Mexican cuisine, in true Texan fashion, beef is king on the other side of the border. The perfect example are tacos alambres, which are delicious street tacos usually made with beef in El Paso. East Side’s Piedras street has numerous dining options where this particular taco is the star of the menu, and most are run by families originally from Juarez (the city that shares the border with El Paso) who cater mostly to the local Hispanic community. Per Chihuahuan tradition, the tacos are accompanied with a baked potato.

Los Tragones Taqueria is an assuming little spot in central El Paso where diners continually praise the high quality tacos, free pitchers of agua frescas, and the many choices at the salsa bar. 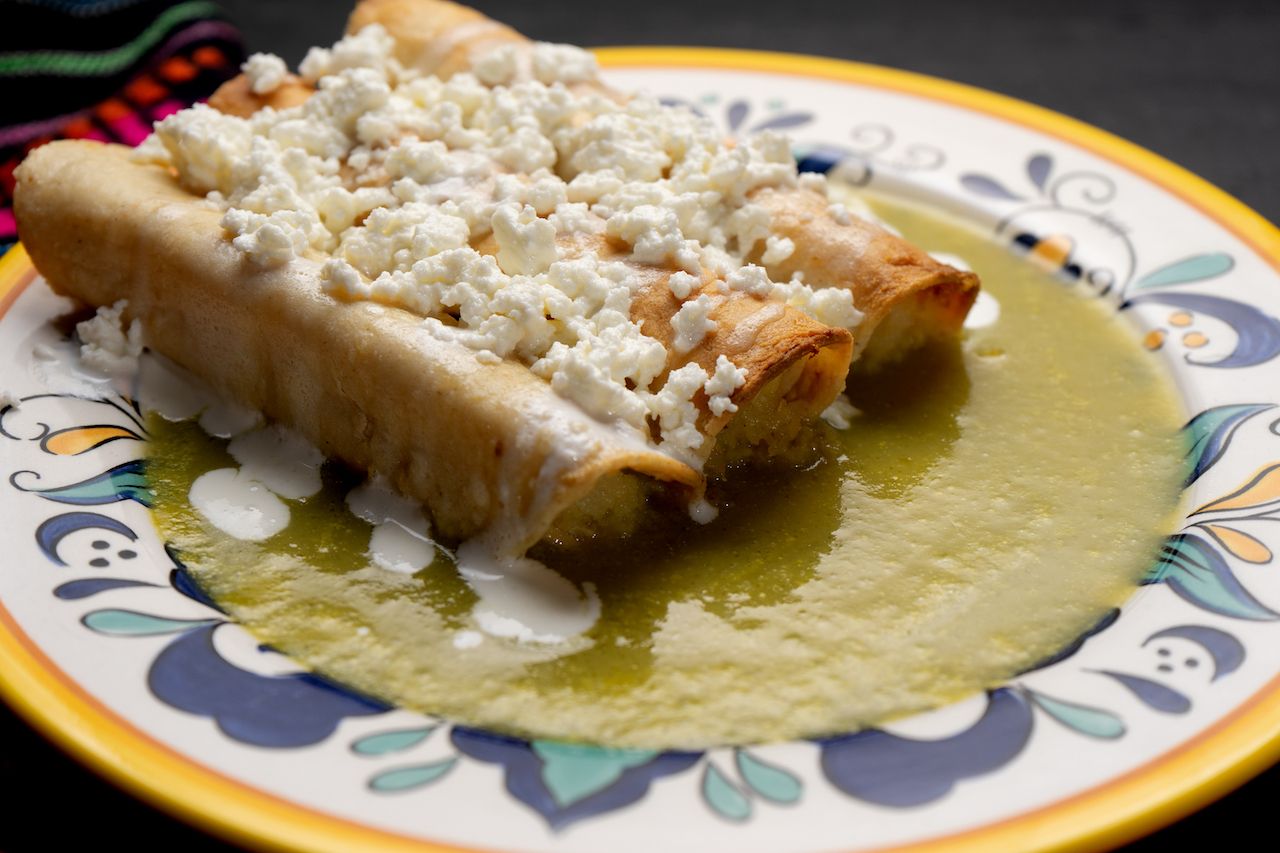 Arguably the city’s most iconic Mexican dish is a deep-fried affair synonymous with the institution that serves it: Chico’s Tacos. Known interchangeably as rolled tacos, flautas, or taquitos, it’s made with fresh corn tortillas stuffed with ground beef, then rolled up and fried. Orders of three are covered in a soup-like tomato sauce — the recipe for which is a well-kept secret — and topped with heaps of melted cheese. Operating since 1953, the menu has kept prices reasonable at $5, and keeps its doors open late into the night for post-bar greasy satisfaction. 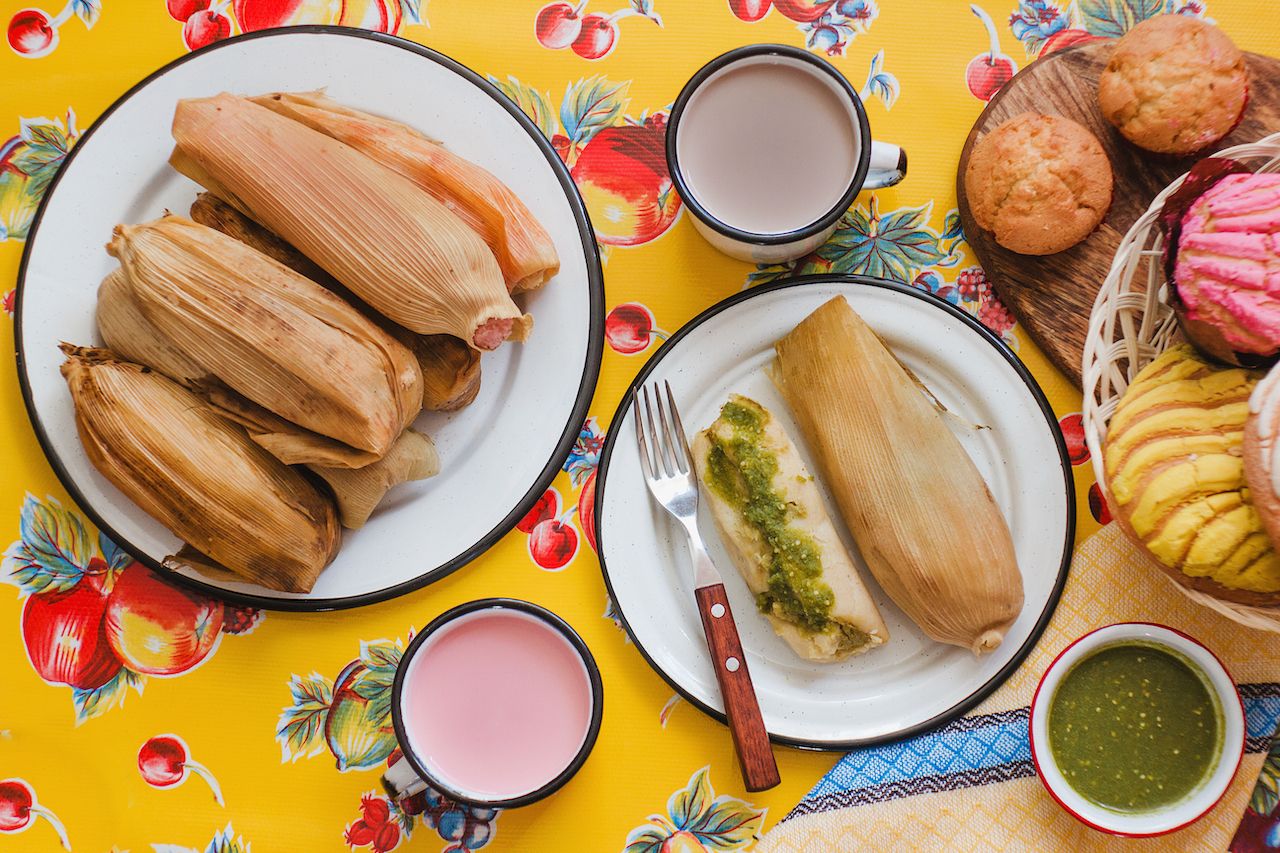 Tamales are a staple of Meso-American cuisine. They’re widespread throughout Central and South America, and were long before the arrival of the Spanish. Corn-based masa dough is rolled into corn husks and steamed with a variety of fillings ranging from vegetables to meats to sweets. Tamales became a staple of El Paso bakeries in the mid 20th century, most frequently stuffed with pork, cheese, and Hatch chilies, the latter of which reflects the city’s proximity to New Mexico.

Gussie’s Tamales and Bakery specializes in Hatch green and red chili tamales with pork, plus a special sweet tamale containing raisins, cinnamon, anise, and coconut. The spot also prides itself on its menudo made with beef tripe and red chilies, which is only available to diners on Wednesdays. 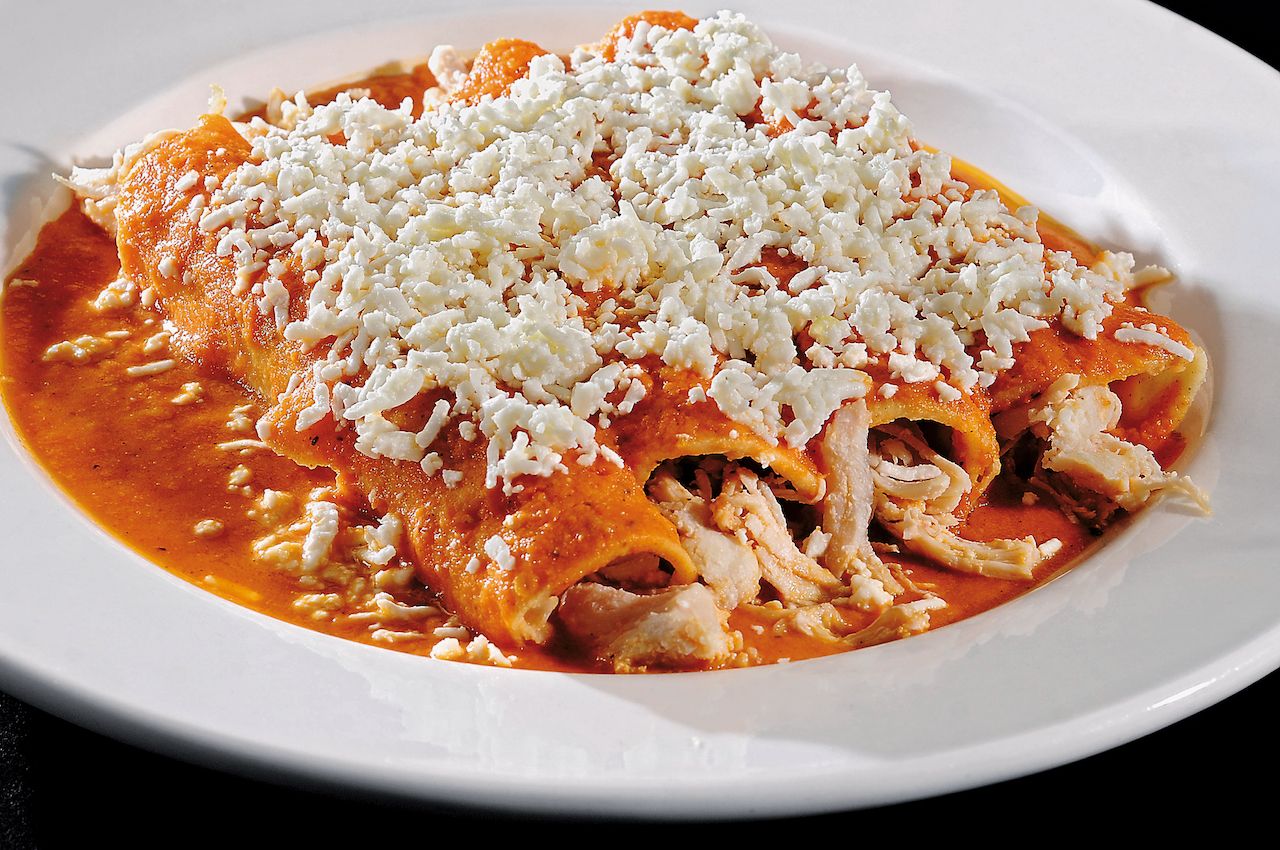 A close relative to enchiladas, entomatadas are distinct in their lack of spiciness and submersion in tomato sauce rather than cheese. L&J Cafe specializes in the El Paso variant on the dish, which rolls the cheese inside the tortilla and then deep fries it rather than melting the cheese on top. The dish is typically prepared vegetarian, with an option for a chicken garnish on top, and always served with a filling side of Spanish rice and beans. 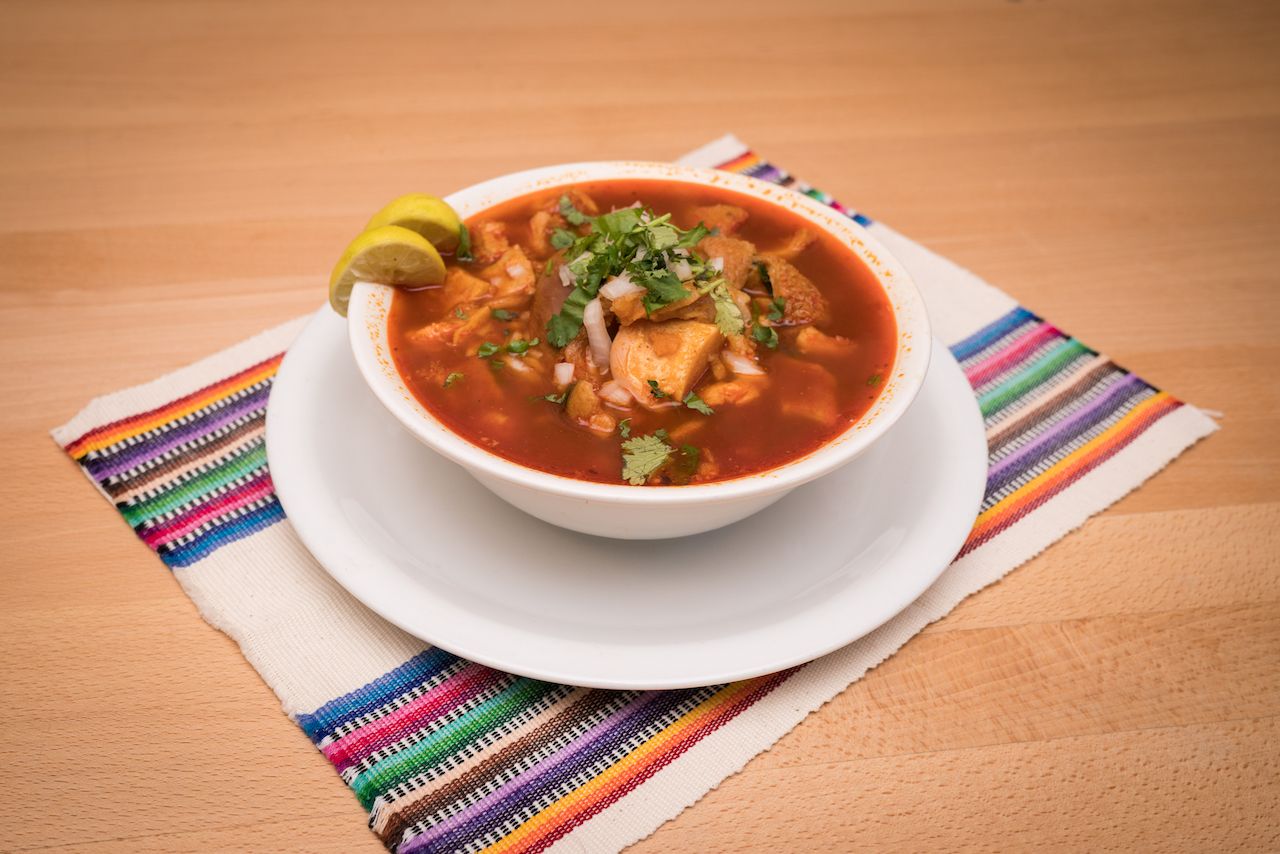 Menudo, a thick deep red stew made with beef tripe, red chilies, hominy, and spices, is traditionally prepared for big family gatherings across Mexico. Many restaurants in El Paso started serving the dish on Sundays to save the labor-intensive effort of preparation at home. It became so popular that the stew has emerged as a comforting staple served any day of the week in restaurants and even bakeries.

The menudo at Good Luck Cafe is famous in El Paso, and its spicy flavors are often praised in local newspapers. But “good luck” learning the recipe — it’s a secret. 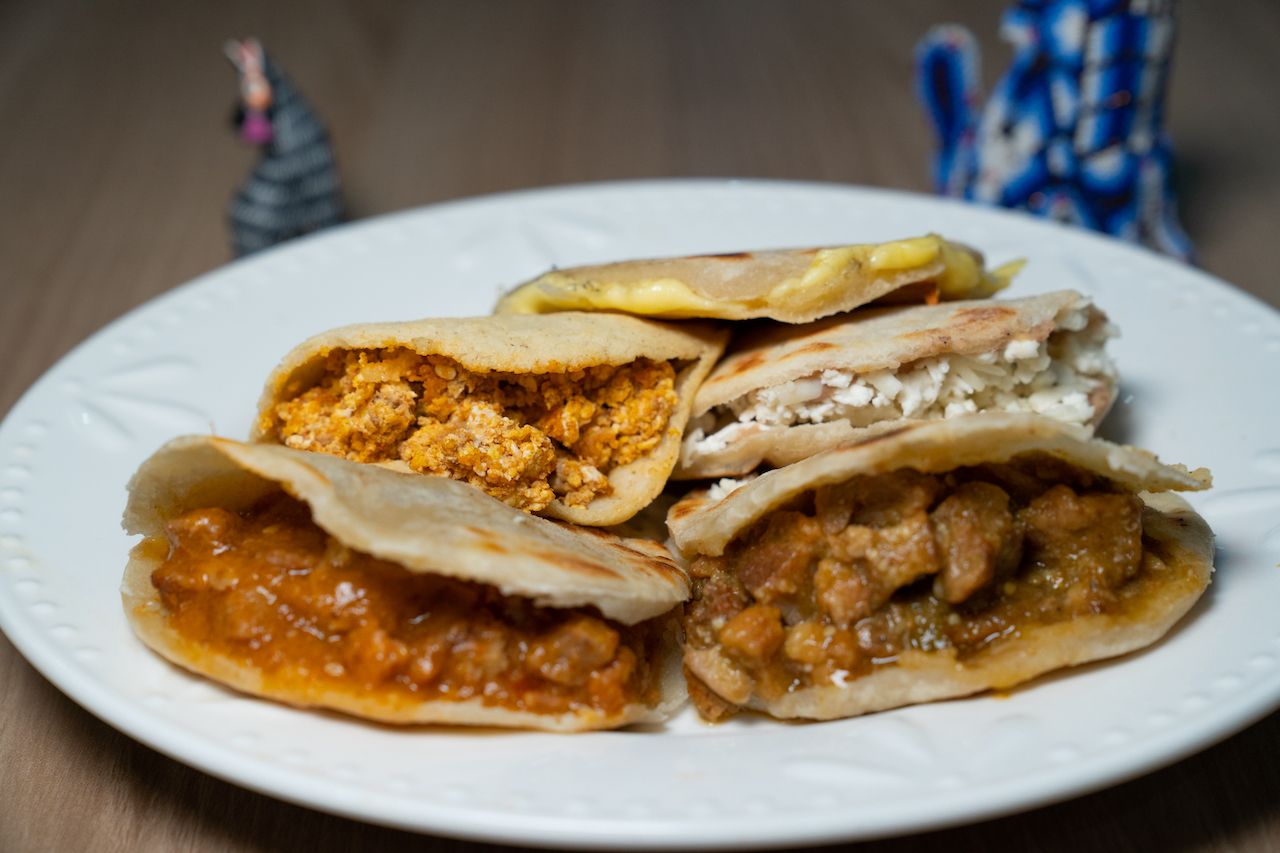 Gorditas are perhaps the most underrated cornflour creations, at least in the minds of Americans who aren’t familiar with every facet of Mexican cooking. Large plate-shaped pillows of dough are stuffed with everything from beans and mole to stewed meats. To the unfamiliar eye, a gordita might look similar to a pita sandwich. For the classic El Paso lunch, sample the local specialty of egg and potato gorditas.

Gorditas Papi Joe specializes in this dish, offering a range of options like gorditas with eggs, beans, cheese, chicharrones, nopalitos (cactus), and deshebrada (shredded beef). The salsas come with a kick, so wash your lunch down with a large horchata for a hearty midday pick me up. 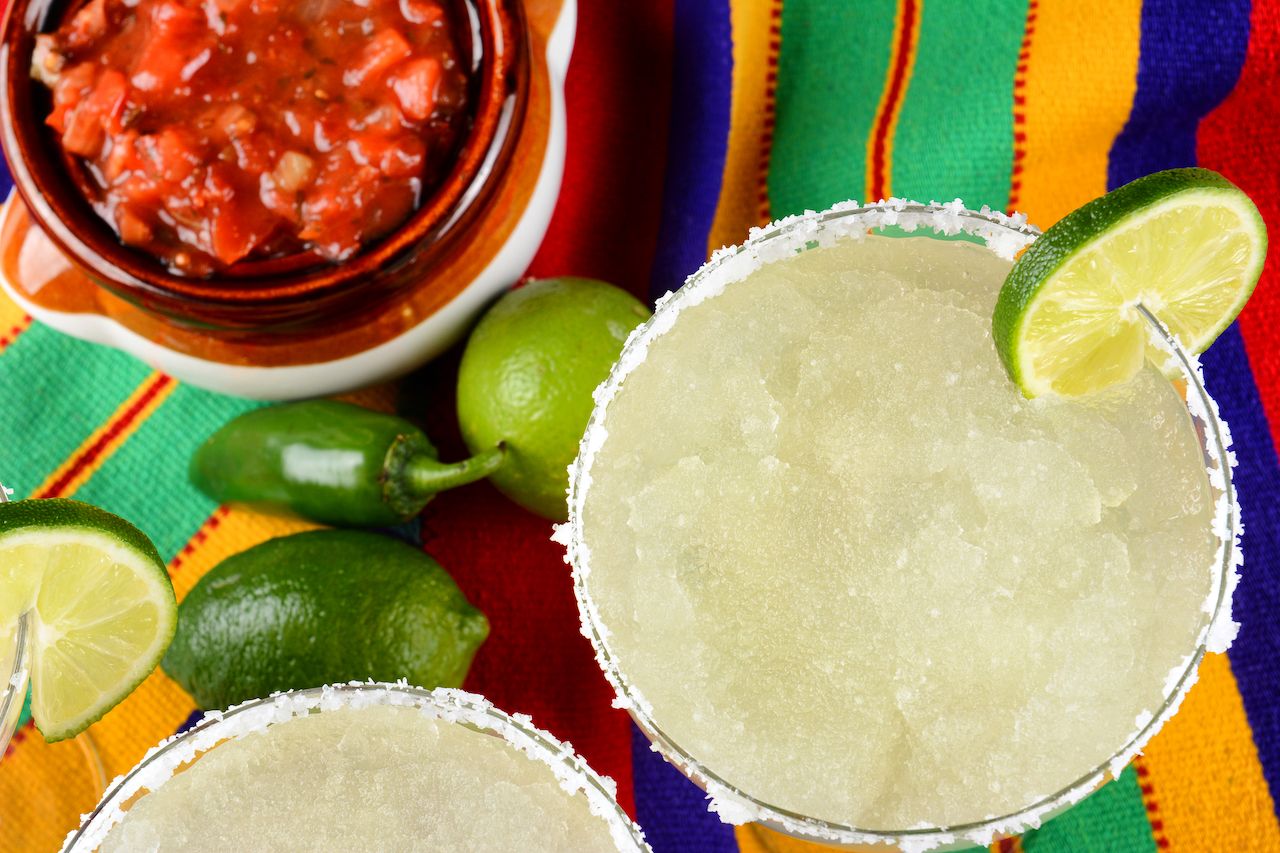 Multiple Texas cities say their claim to fame is this perfect patio sipper, but Juarez-El Paso’s origin story is deemed the most credible. According legend, Francisco Morales first concocted the cocktail at a Juarez bar called Tommy’s Place. Frequented by American soldiers border-hopping from Fort Bliss, Morales whipped up the first margarita as a last-minute substitute for a different cocktail called a magnolia. Using limes, tequila, Cointreau, and a hint of salt, Morales made the first south of the border rendition, and the margarita quickly became the drink of choice for the entire neighboring state.

Los Bandidos De Carlos & Mickey’s claims to make the best margarita in El Paso. It famously comes in a glass so large customers are only allowed one per visit. The flavors on the menu reflect Mexico’s strong influence on the city, and include prickly pear, mango, and chamoy-cucumber (chamoy is a Mexican condiment made from apricots, mangoes, plums, and chilies).

This dish is a perfect blend of traditional Mexican food and El Paso’s Tex-Mex sensibility — and it even incorporates the influences of neighboring New Mexico. Most famously served at James Beard award-winning diner H & H Coffee Shop, the chili relleno burrito combines Chihuahuan soft white cheese stuffed into New Mexico-grown green chile, and since this is burrito country, the chili is wrapped in a large flour tortilla. For an even greater Tex-Mex flair, throw in an egg and call it breakfast.

ReligionFaith on the Frontier: Exploring the El Paso Mission Trail
Tagged
Food + Drink
What did you think of this story?
Meh
Good
Awesome