Overflowing with history and adventure, Mississippi was made for taking the scenic route. When you slow down and seek out the details, the voices of the Magnolia State begin to tell stories. From the tranquil surf of the Gulf Coast to the foot-stomping juke joints of the Delta and everything in between, this is how to wander the entire state of Mississippi in one incredible road trip.

NORTH MISSISSIPPI:
Birthplace of Elvis Presley and the Delta Blues 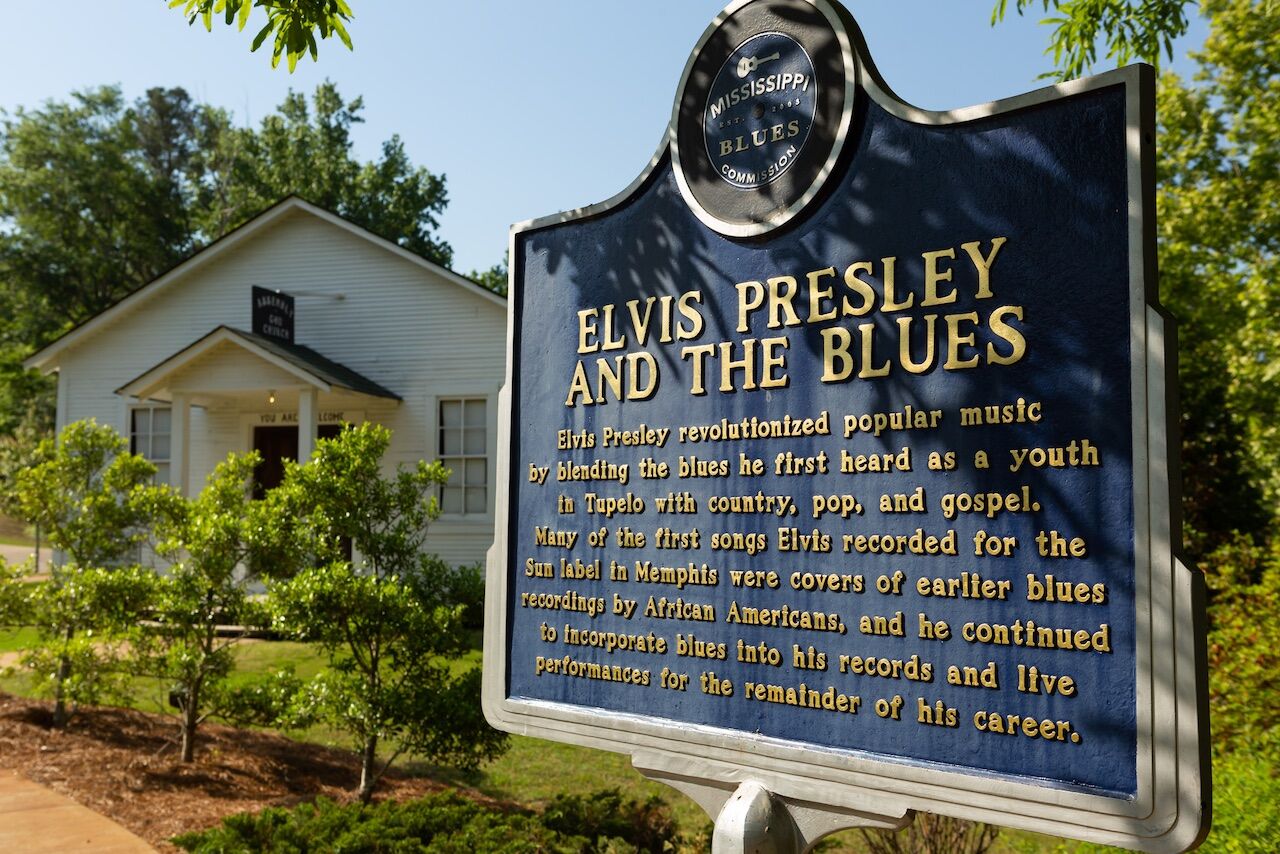 Kick things off on Highway 61, the legendary Blues Highway. Cobalt markers of the Mississippi Blues Trail line this thoroughfare from downtown Memphis, Tennessee, to the Gulf Coast of Mississippi. The journey feels most poignant in North Mississippi, where Highway 61 takes travelers directly to Robert Johnson’s Crossroads. Johnson allegedly sold his soul to the devil in exchange for his musical talent at the intersection of Highways 61 and 49.

En route, make a pitstop in Tunica at the stunning Tunica River Park & Museum to get a glimpse of the Mississippi River. Continue on to Clarksdale, where a smattering of blues clubs still send lively echoes through the Delta night: Ground Zero Blues Club, Red’s, or Levon’s Bar and Grill will treat you right. Grab a room at the Shack Up Inn and spend the morning with a short stack from Our Grandma’s House of Pancakes in the town’s historic downtown before turning east to the storied city of Oxford.

Home to the University of Mississippi and a sizable slice of American literary history, Oxford offers the perfect basecamp to explore a bustling small town in the heart of North Mississippi. Visit Rowan Oak, the historic home of author William Faulkner, and stroll through its nearby forest on the Bailey Woods Trail directly to the University of Mississippi Museum, where collections of Southern folk art share the limelight with Greek and Roman antiquities. Cap your day in Oxford with a stop at the Burns-Belfry Museum & Multicultural Center and revel in an evening concert at The Library on the town square. 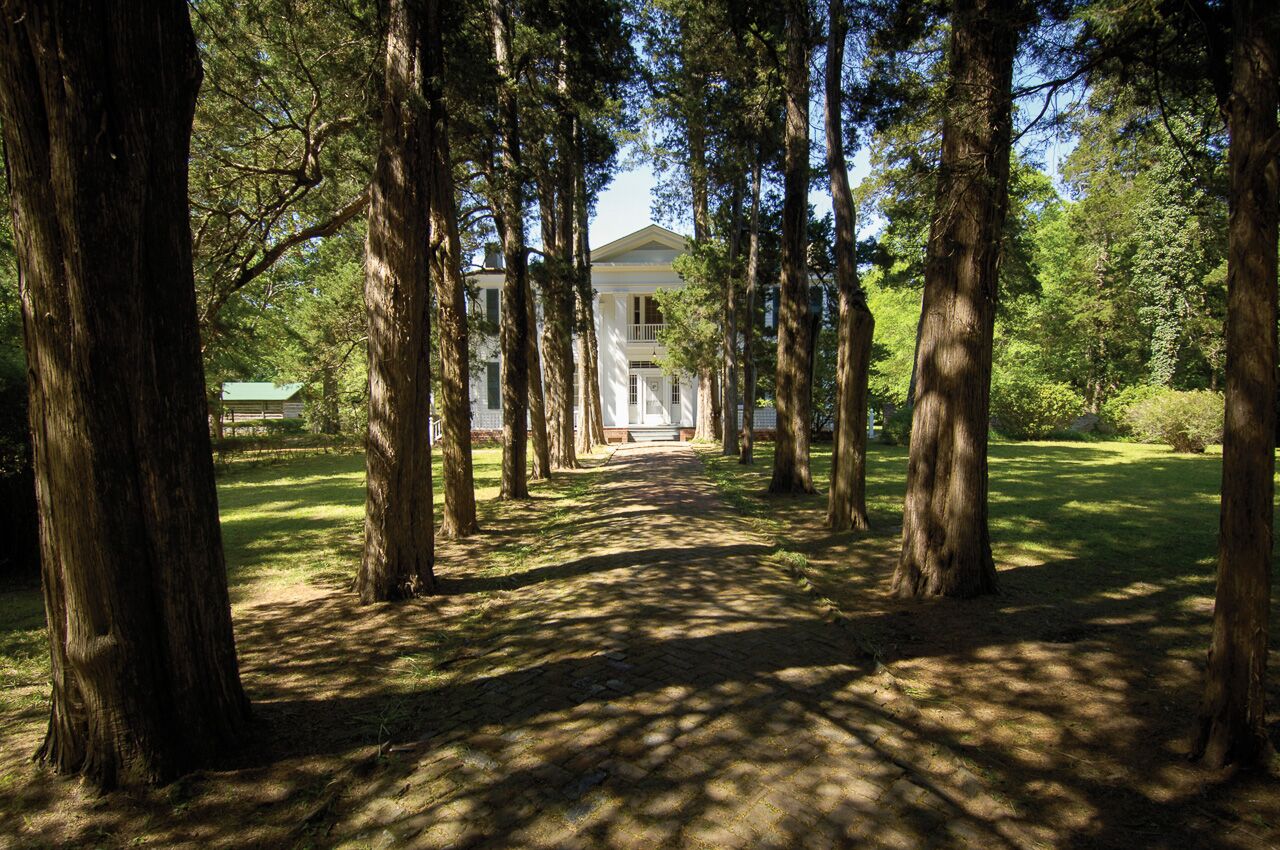 From Oxford, set your sights on Tupelo, where the birthplace of Elvis Presley beckons road-trippers searching for the roots of popular music. Though Elvis didn’t invent rock ‘n’ roll, he certainly helped it take the world by storm. The throngs of screaming fans, The Ed Sullivan Show, the ’68 Comeback Special, the King’s residency in Las Vegas…the story of all that began here, in a humble shack in Tupelo, Mississippi.

Tupelo’s Elvis Presley Birthplace features both the King’s childhood home and the church that formed his earliest impressions of music. There’s also a self-guided bike trail that will lead you to his favorite swimming hole and former school.

After a few days immersed in music history, it’s time to stretch your legs on the Tanglefoot Trail. Grab a bike in nearby New Albany and pedal 43 miles to Houston, Mississippi, on a route traversed by Chickasaw King Ishtehotopah, as well as colonial explorers Hernando de Soto and Meriwether Lewis. In Houston, comfortable rooms and bike racks await at Trailhead Bike & Bed.

In 1955, while Presley was rising to fame on the coattails of Black music, a 14-year-old Black boy named Emmett Till was abducted and murdered about 90 miles south of Graceland. The event drew national headlines to Mississippi and became a watershed moment in civil rights history. Today, the Emmett Till Interpretive Center in Sumner pays tribute to Till and educates visitors on the legacy of his death.

The center is worthy of the two-hour trek westward from Houston, which also puts you within arm’s reach of the B.B. King Museum in Indianola and the grave of Robert Johnson in Greenwood. 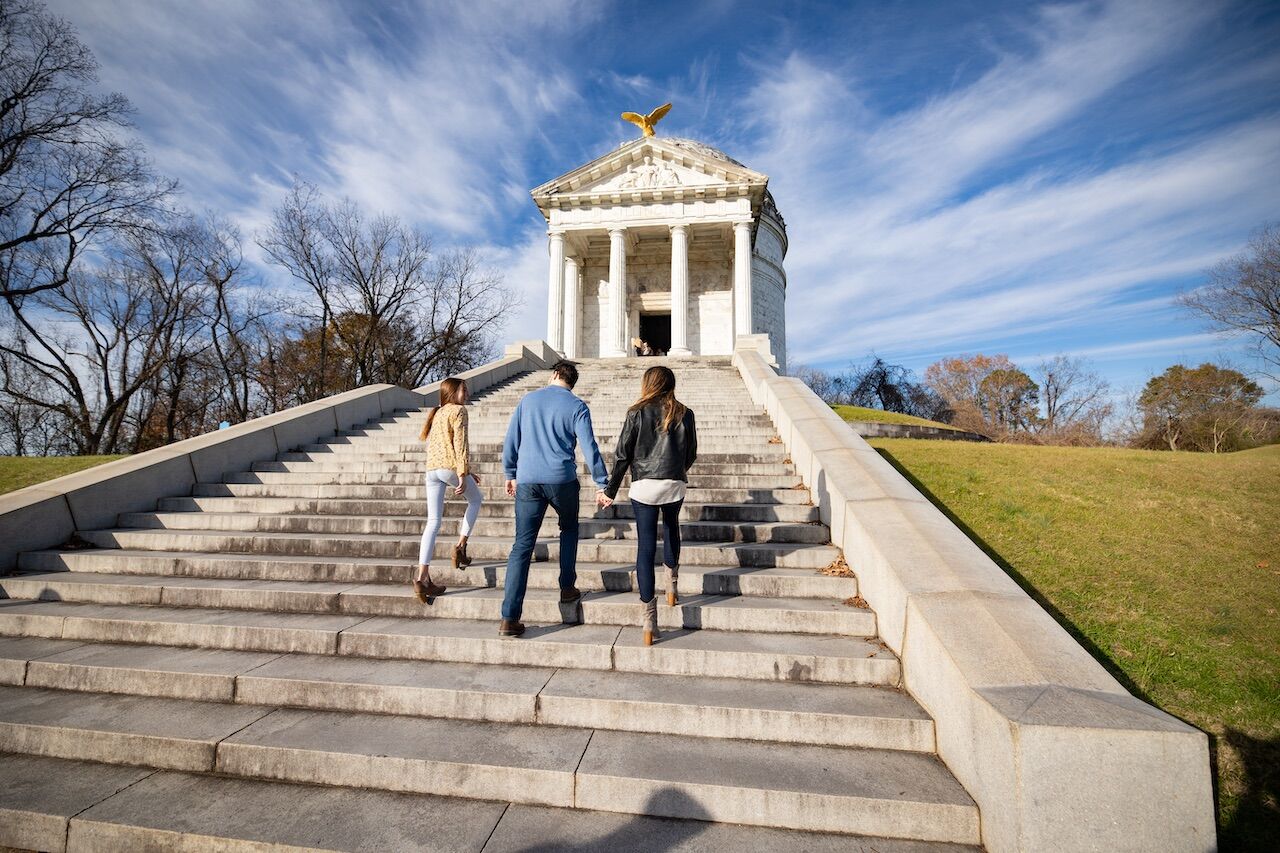 In Central Mississippi, it’s back on Highway 61 for a pitstop in Greenville for authentic Mississippi tamales at Doe’s Eat Place. Plate empty, hit the road to take in 1,000 years of history at the sprawling archaeological site of Winterville Mounds. The massive earthworks here were constructed by a Native American culture that thrived from about 1,000 to 1450 CE, predating the Chickasaw and Choctaw peoples living here when European settlers began to infiltrate the area.

From Greenville, follow Highway 61 to Vicksburg, where American history collides with music history. Just north of town, you’ll spot the impossible-to-miss Margaret’s Grocery. Once home to a rollicking church service held in the belly of a pink cathedral of folk art, the site is now under preservation by the Mississippi Arts Commission and remains an icon on the outskirts of town.

Vicksburg was the site of a major siege during the Civil War, a victory for General Ulysses S. Grant that substantially buoyed the Union’s fight for freedom. Today, the siege lines are still visible at Vicksburg National Military Park, where visitors can walk along rows of cannons set among defensive structures built by Union soldiers during the war.

In town, pop a top at the Biedenharn Coca-Cola Museum — location of the first-ever bottled Coca-Cola back in 1894. Its hall now houses an homage to all things Coke, including exhibits of the original equipment used to bottle the world’s most popular soft drink. 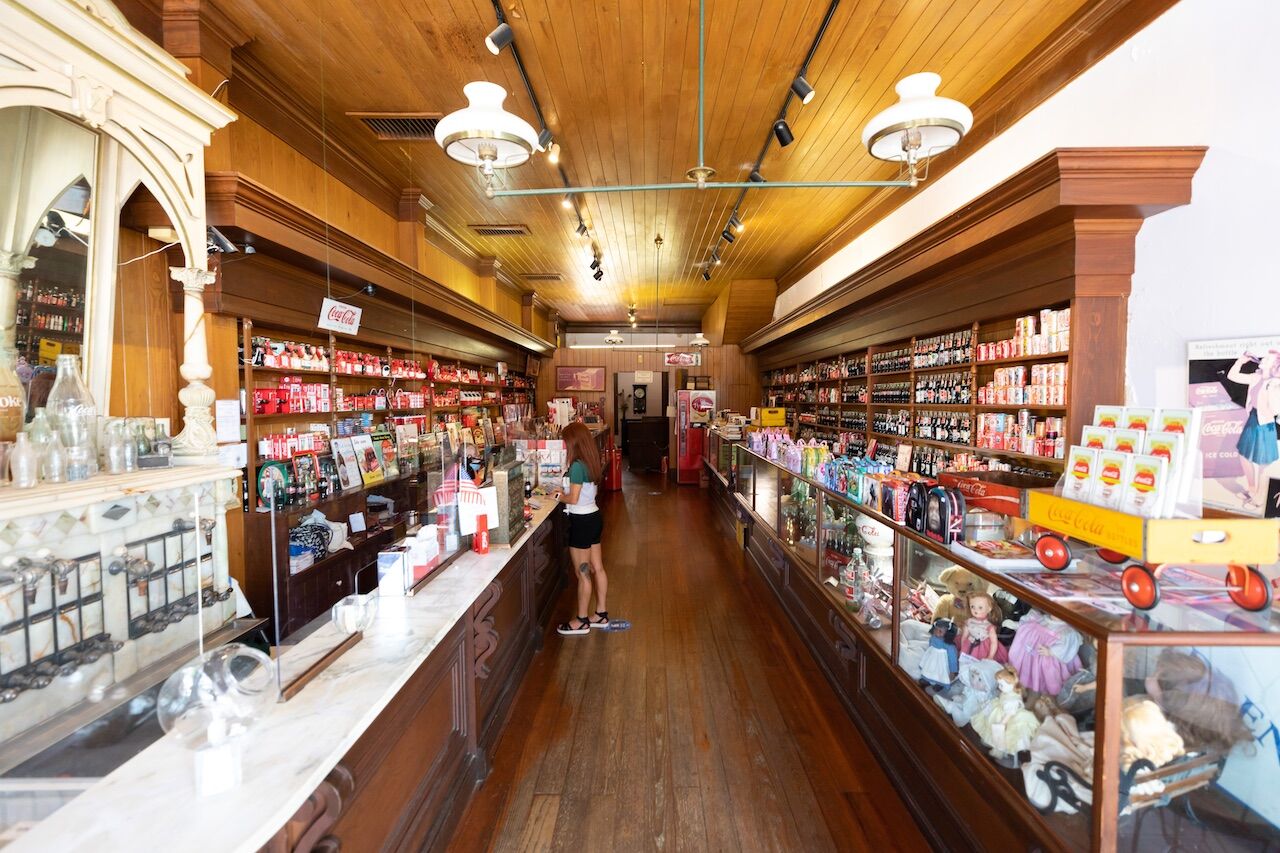 From Vicksburg, jump onto I-20 and make for the state capital of Jackson. Mississippi’s largest city includes must-see stops like the Big Apple Inn, an iconic diner that doubles as one of the best places to grab Southern soul food in the country; the Mississippi Civil Rights Museum, dedicated to state history between 1945 and 1970; and the nearby Mississippi Petrified Forest, site of a 36 million-year-old log jam where visitors can camp or try their hand at manning a flume for gems.

When you’re ready to continue, you’re in for a treat, as the route you want is one of the nation’s oldest roads: the Natchez Trace. Pick it up just west of Jackson and take it south through Mississippi farm country. Sunken portions of the original Natchez Trace still linger in the forests here — like the portion at Milepost 41.5, where road-trippers can stretch their legs on a submerged path trod by people long before the United States was born, and by bison before them.

Eventually you’ll roll into Natchez, once one of the wealthiest cities in America. Today, it’s the perfect place to overnight on a Mississippi road trip. Smoots Grocery Lounge serves up the tunes. Under The Hill Saloon serves up the drinks. And the Natchez Museum of African American History and Culture serves up a sobering reminder of how Natchez initially gained its wealth as a hub for the transatlantic slave trade. 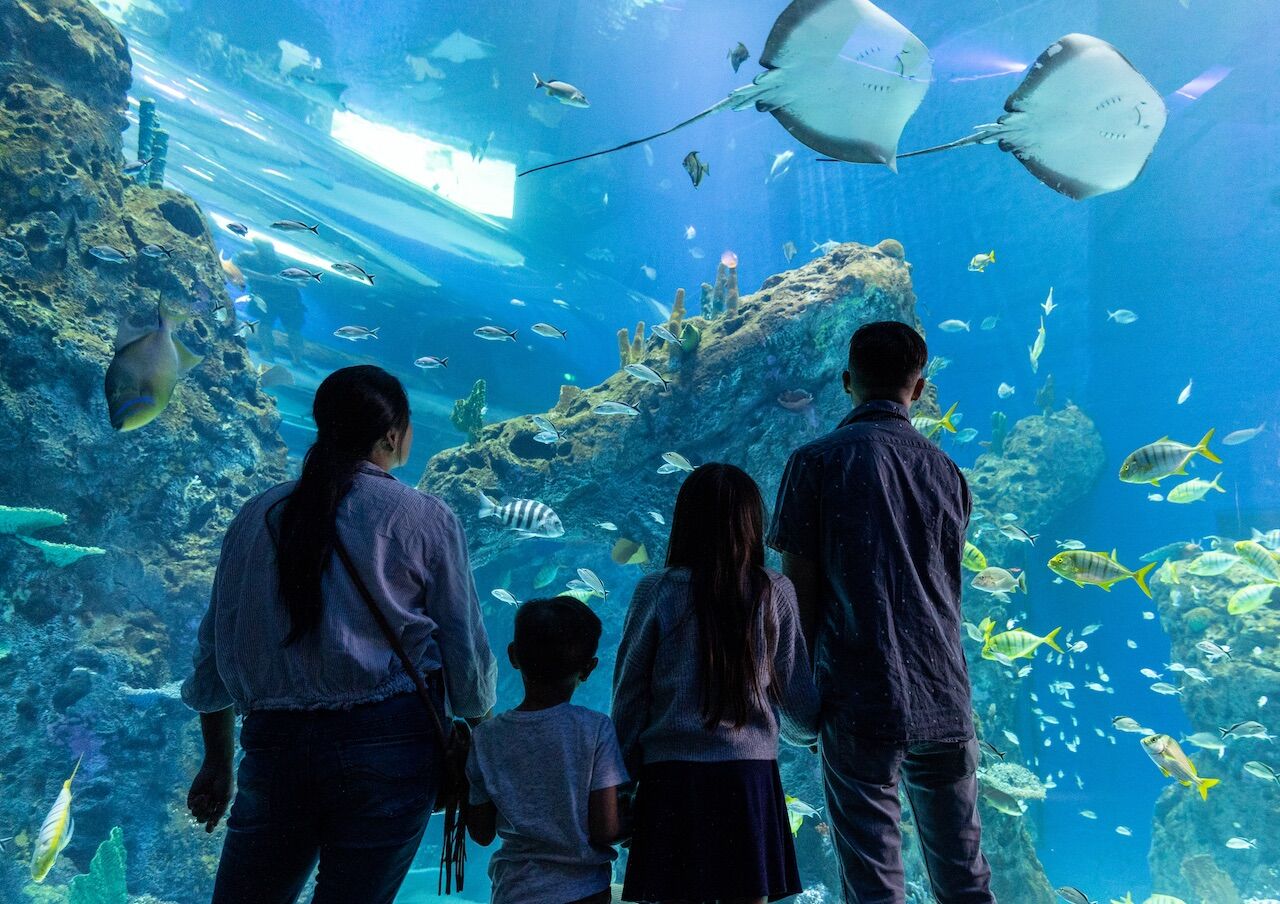 From Natchez, make a beeline east on Highway 98 to Hattiesburg, home to the fascinating African American Military History Museum, the epicurean Hattiesburg Pocket Museum, and another cycling opportunity along the 44-mile Longleaf Trace. Wind down with a pint at Southern Prohibition Brewing before gearing up for a trek down America’s Secret Coast.

Just 68 miles from Hattiesburg, lively Gulfport and the beaches of the Gulf of Mexico welcome travelers to this 62-mile secluded stretch of saltwater and sand. Hop out of the car in Gulfport to take a stroll down Fishbone Alley. This colorful collection of murals and public art backs up to a plethora of restaurants and bars about a block from the city’s busy harbor. Swim with stingrays at the Institute for Marine Mammal Studies or take a walk underwater at the Mississippi Aquarium, where visitors can don spacesuit-like gear called SeaTREK to stride beside fish. 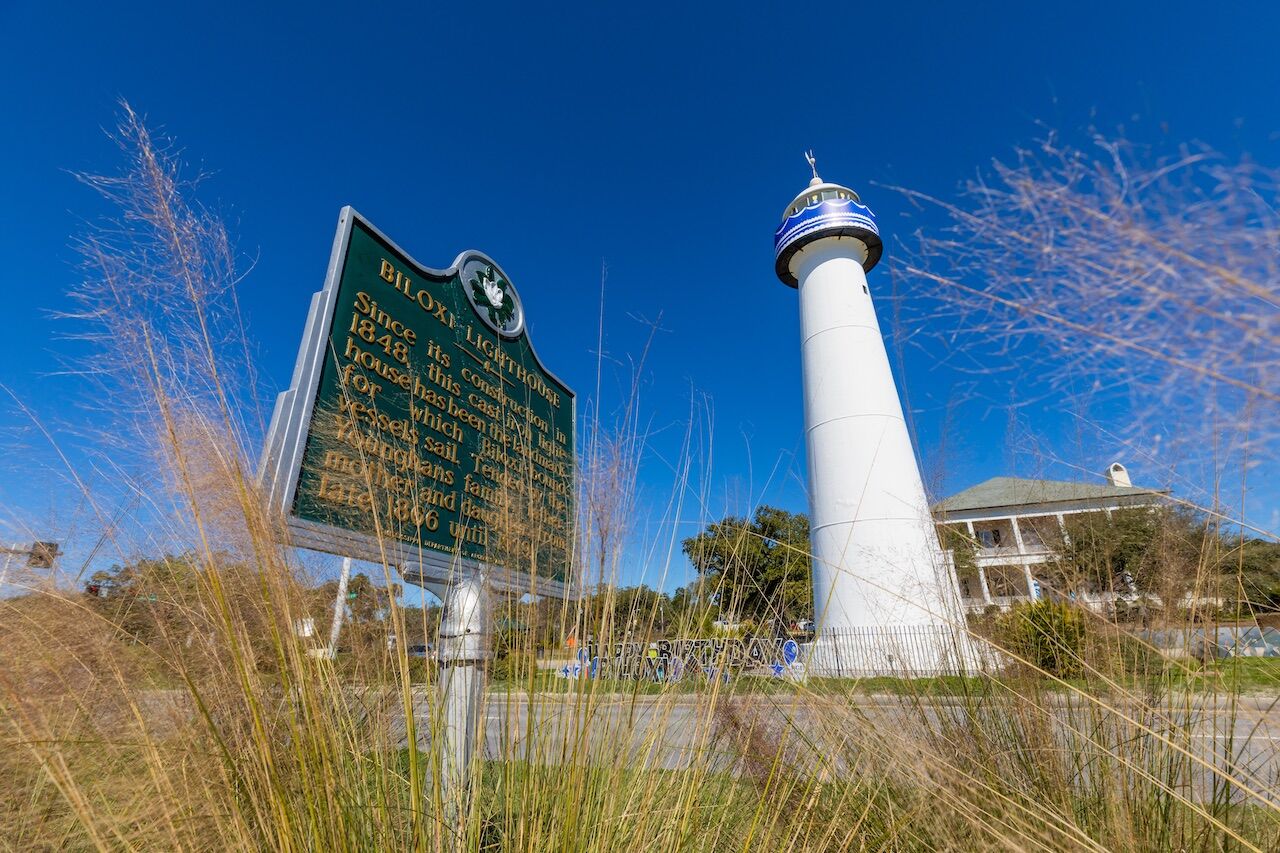 Once you’ve experienced Gulf Coast marine life firsthand, load up and make the 30-minute drive to Biloxi for a date with the “Mad Potter of Biloxi,” George E. Ohr. Ohr was a 19th- and early 20th-century potter who handcrafted stunning pieces with an outsized impact on the world of pottery today. A futuristic museum dedicated to his legacy sits across Highway 90 from Biloxi Beach.

Biloxi is a central hub of the Secret Coast, where travelers can book fishing charters, sailing charters, shrimping experiences, and excursions — like the Ship Island ferry — to Mississippi’s barrier islands. Consider grabbing a room at The Roost, a boutique hotel just over the Highway 90 bridge in Ocean Springs, and a cup of traditional Gulf Coast gumbo at The Bayou Restaurant & Tiki Bar.

Bookend your Mississippi road trip in Pascagoula, the birthplace of singer-songwriter Jimmy Buffett. The Pascagoula Historic Bike Trail meanders past Buffett’s childhood home and Gulf Coast icons like the Round Island Lighthouse, a great example of how Mississippi meanders and rolls: music, history, and outdoors, all as one.

This post is proudly produced in partnership with Visit Mississippi.
Tagged
Road Trips Mississippi, United States
What did you think of this story?
Meh
Good
Awesome