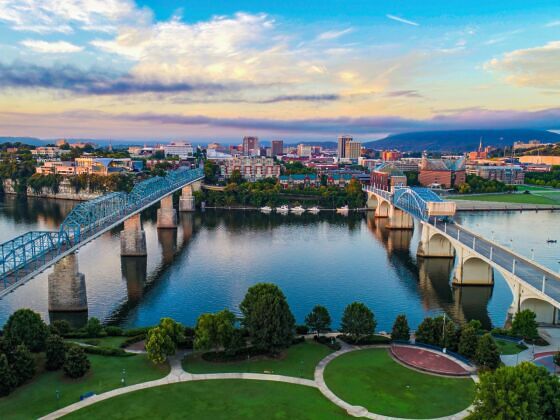 A Statewide Guide to Exploring the Best of Tennessee

Smoky Mountain sunsets, Lower Broadway’s honky-tonks, and Beale Street’s neon glow are just a few sensations that make the scenic route worth taking all the way through Tennessee. This star-studded state spans 400 miles from east to west, leading visitors from the foggy peaks of the Blue Ridge Mountains to the hollows of Appalachia to the rolling waters of the Mississippi River.

Each region — East, Middle, and West — claims a bustling homebase steeped in music history and culinary tradition, making the Volunteer State both delightful and logistically convenient to explore. From iconic landmarks to incredible outdoor adventures, set out on your own Tennessee discovery tour with our statewide guide.

This post is proudly produced in partnership with the Tennessee Department of Tourist Development.

Homebase: Knoxville. Centered around a vibrant downtown filled with arts and culture, this East Tennessee hub is the big-city gateway to the Smokies and the Cumberland Plateau. Mountains rise beyond the skyline in multiple directions, providing plenty of outdoor adventure in and around their weatherworn peaks. You’ll find family fun and off-grid expeditions in this section of the Volunteer State made for the nature lover.

Dollywood – Spend the day riding the rollercoasters and waterslides at Dollywood before settling into a rustic Tennessee cabin. The best theme park in the US according to TripAdvisor, Dolly Parton’s namesake attraction is beloved by families looking for a full day of mountain fun.

Lookout Mountain – Head two hours south of Knoxville to watch the sun set over Chattanooga at Sunset Rock or ride the Lookout Mountain Incline Railway to the top for a spectacular scene. Up here you’ll find Rock City Gardens, a natural wonderland of wild rock formations and 400 native plant species (plus trails, caverns, and a gift shop). Located a breath away from the Georgia state line, this landmark of Americana is a must-see when visiting East Tennessee.

Ruby Falls – Explore an underground world full of light and sound at Ruby Falls, the country’s tallest underground waterfall open to the public. This Tennessee wonder is one you’ll remember long after the visit is over.

Gatlinburg SkyLift Park – Riders can take the SkyLift 500 feet up to cross the Sky Bridge — the longest pedestrian cable bridge in North America. Stop at the midpoint to glimpse the view below through glass floor panels.

Sunsphere – Built for the 1982 World’s Fair, the 266-foot Sunsphere is home to one of the state’s most scenic observation decks. Make the trip up to the fourth level to get a glimpse for yourself.

Bijou Theatre – Take in a show in a former vaudeville staple: the Bijou Theatre. This property traces its history all the way back to Andrew Jackson’s administration, when the building operated as a hotel. Today, the Bijou hosts acts from Mavis Staples to Dawes and features a seven-day-a-week bistro.

Knoxville Ice Bears – From October to March, Knoxville’s minor league hockey franchise, the Ice Bears, serves up family entertainment on the doorstep of the Tennessee River at the Knoxville Civic Auditorium and Coliseum.

Lower Broadway – Head to Lower Broadway to find the historic heart of Music City. While the area has shapeshifted over the years, haunts like Tootsie’s Orchid Lounge, Robert’s Western World, and Acme Feed & Seed still serve up a foot-tappin’ good time.

The Parthenon – Nashville is also known as the “Athens of the South.” Built for the 1897 Tennessee Centennial Exposition, this life-size replica of the most famous building in Greece — featuring a to-scale statue of Athena — is as close as you can get to the Mediterranean without crossing an ocean.

Bike the Natchez Trace – Hop on a bike and pedal down a slice of the historic 444-mile Natchez Trace Parkway. One of America’s most scenic thoroughfares, the Trace is an ideal place for road cycling set amidst the rolling hills of Middle Tennessee.

Kayak at Harpeth River State Park – From spring to autumn, the typically placid waters of the Harpeth River offer a playground for paddleboarders and kayakers a short drive from Nashville.

Tennessee State Museum – From the Battle of King’s Mountain to Indigenous cultures and the geologic wonders of the Smoky Mountains, get a grip on Tennessee history at the Tennessee State Museum. This robust time capsule of the Volunteer State is an immersive experience for history lovers of any age.

Tennessee Titans – From August to January, the Tennessee Titans take center stage at Nissan Stadium. After catching a game, walk from the stadium to downtown via the John Seigenthaler Pedestrian Bridge for easy access to Lower Broadway and Nashville’s Arts District.

Homebase: Memphis. The birthplace of rock ‘n’ roll and a foundational city in the genres of blues and soul, Memphis is one of America’s true cultural capitals. The city that gave the world B.B. King, Elvis Presley, Johnny Cash, Isaac Hayes, and Three 6 Mafia has a rich history that still reverberates from its streets. Stroll its blocks and feel it for yourself.

Sun Studio – The room where rock ‘n’ roll began still looks much as it did when Sam Phillips recorded the likes of Ike Turner, Elvis Presley, Johnny Cash, Carl Perkins, and Jerry Lee Lewis in the 1950s. The studio offers tours and includes a museum where the first DJ booth to broadcast rock ‘n’ roll music is on display.

Graceland – The home of Elvis Presley from 1957-1977, this suburban Memphis estate is one of the most visited homes in America. The recent additions of the Soundstage at Graceland and the Guest House at Graceland have reinvigorated the experience with live music and an immaculate, Presley-themed place to stay.

Reelfoot Lake – Stunning Reelfoot Lake State Park sits 30 minutes from Discovery Park of America. Explore the history of the scenic cypress-lined lake created by earthquakes in the early 1800s, and get up close with local wildlife at the park’s visitor center.

Earnestine & Hazel’s – The “most haunted bar in America,” Earnestine & Hazel’s has a checkered past as a church, a salon, a brothel, and a nightclub. These days, the music still ricochets out its doors and onto South Main Street for those brave enough to step inside.

Tina Turner Museum – In Brownsville, visit Flagg Grove School and walk in the footsteps of Anna Mae Bullock, her sisters, and her classmates. Anna Mae is better known as world-renowned singer, dancer, actress, and author Tina Turner, and the school houses the only Tina Turner Museum in the world.

Memphis Grizzlies – The NBA’s Grizzlies moved to Memphis in 2001 and never looked back, becoming perennial playoff contenders and one of the hottest teams in the league. Led by superstar point guard Ja Morant, these bears throw weekly parties on Beale Street at FedExForum from November into May each year.

This post is proudly produced in partnership with the Tennessee Department of Tourist Development.
✖
travelstoke
Download the mobile app
stoked by