When Alli Sharifi left for spring break, she didn’t think she’d need much. A couple changes of clothes. A few staple toiletries. Maybe a laptop. A few days later, she realized she’d be needing a lot more.

“I came home from spring break with a backpack full of stuff I needed for the week,” the University of Miami (UM) freshman said from her home near Chicago. “Then I heard on Thursday it was extended for another week. Then five days ago I learned they canceled for the rest of the semester.”

Though flying seemed like a dicey proposition, the stress of not having her books, study materials, medication, and most of her clothes forced Sharifi to fly to Miami the next day, clean out her dorm room, and hurry back home in less than 48 hours.

“The dorms are completely locked down now,” she said. “I have a ton of friends who can’t get [their stuff] until May.”

Sharifi is one of thousands of college students who’ve had to make fast and dramatic adjustments in the wake of COVID-19. Nearly every college or university in the United States — and the world — has moved its classes online for the foreseeable future, shuttering classrooms, dormitories, dining halls, and pretty much everything else that makes up the college experience. For students looking forward to finishing out their spring with sports, parties, and in-person instruction, it’s been a massive disappointment. But in their own ways, all are adjusting.

Making your entire schedule on the fly

“Once I heard about how intense my grandparent’s situation was in Italy, I knew that when they said, ‘Classes will return April 13th,’ I wasn’t going to be back,” said Kent State freshman Alessia Liebovich. “It was just heartbreaking when you think you have two months left and it turns into two days.”

Liebovich was overwhelmed with emails from her school, and with her planner left back on campus she had to improvise and create a new binder of all the important new due dates. The silver lining, she said, is that being stuck at home has motivated her to get ahead on these kinds of tasks.

“I may be getting work done faster,” she added. “But I’m not comprehending the information as well.”

Creating structure has been the first order of business for many students, who in the absence of classes to attend have learned time-management skills ahead of schedule. University of California, Los Angeles sophomore Erica Thompson said she had difficulty getting motivated to study for finals after they were moved online, but recognized the importance of forcing herself to do it.

“I think that it’s important to keep some sort of routine going even when quarantined,” she said. “It’s good for mental health. If we’re still required to stay at home next quarter, I’ll try to get up well before my first class so that I can get ready and eat breakfast like a normal school day. That’ll allow me to approach my online classes with more seriousness and attention.”

“My classes are later in the day now because of the time difference so it hasn’t been too hard to work them into my schedule,” said Simone Sober, a University of Southern California junior from Bethesda, Maryland. “I block out the time that I know I have to be in class and try to work around that time period for planning out the rest of my day.”

Fighting distractions and finding a place to work

Still, even with a highly structured schedule, online classes aren’t the same immersive experience as in-person lectures. And distractions abound. Learning to ignore those distractions is another difficult lesson for students new to online education.

“The constant notifications from news networks is what’s keeping me from getting top level work done,” said Sharifi, nearly a week into online classes. “Right now, there seems much greater issues at hand, and I’d rather spend time FaceTiming my grandparents and bringing food to shelters rather than annotating a textbook.”

It’s not just the news that competes for students’ attention. Ever-present smartphones — and even the sites facilitating the online classes — can create serious distractions.

“I always get distracted by some pop-ups on the website or Instagram notification, since there is no one keeping eyes on what I am doing,” said Yiming Li, a senior at New York University. “It’s pretty hard for me to always pay attention to the lecture.”

Those distractions get compounded when students are missing another key component to the learning process: a regular place to study.

“It’s harder to be engaged when you are watching a screen rather than be surrounded by that world,” said UM freshman Sarah Klein. “It’s almost like we’re all in different dimensions. It’s also harder because I’ll have to find a good study environment and sometimes it’s hard to focus at home.”

Like American office workers suddenly forced into working from home, students mentioned the importance of finding an appropriate workspace and treating it like that: work.

Sharifi said it was easy designating a “work zone” in her parents’ home. Her classmate Yiyi Wang said she’s actually more on-time to her at-home, off-campus “office” than she was to physical class, with no transportation rides and rainy walks to slow her down.

Missing out on more than in-person lectures 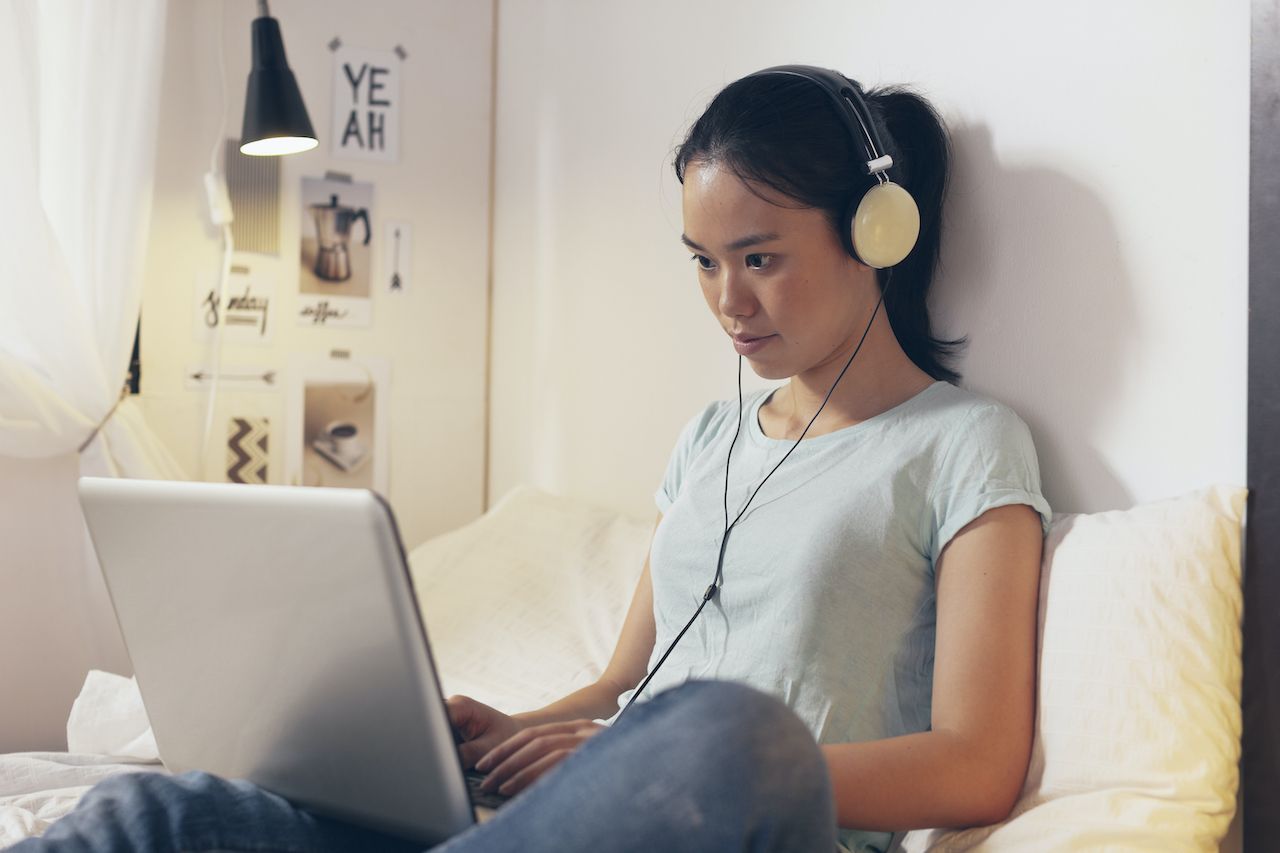 Though most students admit that they can learn through online classes, many still feel like they’re missing part of the college experience.

“I feel like we’ve still been able to facilitate great discussions, even though everyone is in different spaces physically,” said Thompson. “It also certainly makes life easier since I don’t have to rush across campus. Although, it does feel like I’m getting cheated out of part of my college experience.”

Much like on-campus life, the shift to the online college experience isn’t just about academics. It’s about the social, environmental, and physical factors that transport someone from their life back home to their life at school. And that’s something that cannot be streamed.

“Yesterday I found myself missing the dining hall,” said Klein. “I honestly never thought I would experience that emotion — literally no one likes the dining hall. I think I just missed the availability of cooked food, now I have to make it myself. Every grocery store in Dallas is short on food so we don’t really have that many options right now. I accidentally had moldy blackberries as a snack today.”

Klein also said she misses going from dorm room to dorm room, borrowing supplies and laughing about things that happened on her floor. And dancing at bars near campus. And fraternity events. And staying up all night.

Still, students are finding ways to stay connected for the time being. Sober said she spends a few hours each day talking to friends, just to check in, but admitted it’s been a tough adjustment. Her sentiments were echoed by a lot of students.

“Obviously things like FaceTime and social media are great outlets,” said Sharifi. “But nowhere near the experience of living in the freshman dorms with all of your friends.”

University of Minnesota PhD candidate Xiang Zhang just misses feeling the midwestern air as it shifts from winter to spring. “I like walking around campus, feeling the change of weather, seeing different people every day,” he said. “Taking classes at home definitely undermines that experience.”

The feeling of having one’s experience undermined is especially true for students who came to the United States to study, and are now missing out on something they’ll never get back.

“It feels like the space and education I depended on to travel half a world away is lost,” said Vietnamese international student Mia Than. “Many don’t feel the same way as I do since they only have to drive or a plane ride away from home, but as an international student, there is a great effort to stay in a foreign country with no close family members nearby.”

“When classes go online, it means that the dorms are closed for residents,” she continued. “The decisions to either stay or leave are daunting to the rest of us. I generally could not be sadder.”

Seniors feel the brunt of it too, as the graduation they’d been looking forward to for nearly four years is not going to happen.

“This is my last semester, and I have to admit that I feel terrible,” said Wang. “I perfectly understand the decision. However all my future plans, such as graduation, exchange program, and other things, are forced to cancel. This is not just about one semester. I guess I just have to accept that my college life will end this way.”

Keeping the bigger picture in mind

Wang’s resignation to sacrifice is not exceptional. Though younger millennials and Gen Z are sometimes chided for being self-centered and near-sighted, this crop of college students is fully aware what they’re doing is for some kind of greater good.

“That’s our compromise when faced with this global virus issue,” said Zhang. “This must be an unforgettable semester, and we should reflect and innovate through this crisis instead of complaining.”

Back home in Chicago, Sharifi understands the big picture as well as anyone. With older parents, she has been self-quarantining since coming back from Miami, and stresses why it’s important she does.

“It makes me angry when I see my friends partying and going out because isolation…could save someone’s grandpa, someone’s mom,” she said. “I hope [students] see this as a wake up call. Just because we are in college and living our greatest years, there are people on this planet whose lives are in grave danger. And we need to take a step back and protect each other.”

WellnessHow To Stay in Shape at Home When the Gym Is Closed
Tagged
Lifestyle Wellness
What did you think of this story?
Meh
Good
Awesome