Superblue Miami is changing the way people experience art. The immersive, technology-driven museum in Miami’s industrial Allapattah neighborhood is far more than a series of installations for people to stroll through and admire. It’s a place where visitors can affect the art around them, and be as much a part of the show as the works filling the walls.

“We’re prioritizing shared experiences between artists and audience,” says Superblue’s Director of Experiential Art Centers Shantelle Rodriguez. “Rather than the traditional practice of artists creating in studios, then maybe seeing them at a show, our goal is to reach a broader audience.”

So how is Superblue making that happen? By creating a walk-through space where you can touch the walls and make vines climb skyward, and opening a room of clouds, where one can immerse themselves in the mist and change its shape. Superblue is art-as-experience rather than showcase, and democratizes art in a way that it’s accessible to everyone.

“It’s not just pictures on a wall,” Rodriguez says. “It’s always unexpected. We’ve had a ton of kids get pulled in for school, and they were not happy to be here until they were finished. And then they were like, ‘Oh, I thought you were bringing me to a boring museum.’”

What is Superblue Miami?

Put simply, Superblue is a rotating collection of interactive art installations. Currently, it houses an exhibit called Every Wall is a Door, a frequently abstract look at how people affect the environment. Works are from various artists, including the art collaborative teamLab, and noted light sculptor James Terrell. And while Rodriguez wouldn’t divulge what exhibits might be coming next, she did indicate 2022 will see some new stuff.

Interestingly, Superblue also shares its proceeds with the artists. So that rather than depending on wealthy collectors to support them, artists can showcase their work and make revenue based on the audience.

“There’s a whole commercial engine needed to support (the artists),” Rodriguez says. “If they’re not making money, they’ll retreat back into their studios. Museum shows don’t pay a residual, so the ground breaking model is creating experiences that give revenue back to the artists.”

The #1 piece of advice for visiting Superblue Miami

Though it might sound a little trite to say “keep your mind open” when visiting an art museum, at Superblue it really is the best advice. What you’ll find is always going to be a little out of the ordinary, so having no preconceived notions before walking through the door is wise.

“Have no expectations, just have fun,” says Rodriguez. “People are used to going to museums with a certain attitude, (they) have to be mellow or mature. Just come as you are and explore and learn about the artists.”

Passes to Superblue are timed, so, in theory at least, you’ll never really have to deal with exhibits being more or less crowded than other times. That said, Superblue isn’t pushing people though, so if you want to spend three hours watching the seasons change in Proliferating Immense Life you can do that.

The museum lets fewer people in during the week than on weekends, though, so if you really want to have the place to yourself go between 11 AM and 3 PM on weekdays.

Where to start your Superblue experience

Superblue is a journey, not a destination. So you really only have one place to start, and that’s at the beginning. No need to try and plan your time here, it’s pretty much laid out for you.

Everything to see when you visit Superblue Miami

Remember, Superblue’s installations are rotating, and while Rodriguez assured it’s not like a regular museum where they shift things out every three months, you also may not see this exact lineup on your visit. Best to check Superblue’s website to see what’s on when you go. 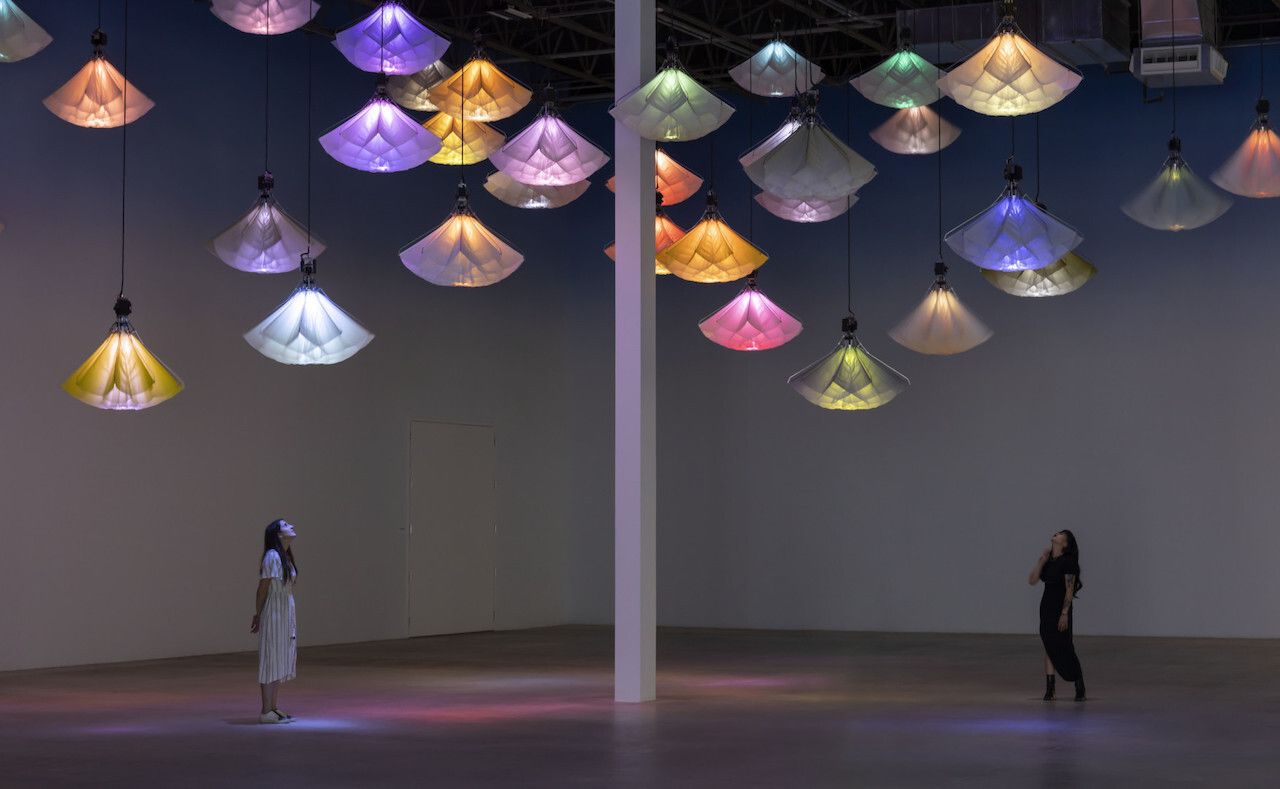 You’ll have to look up to catch Meadow, Superblue’s first exhibit. It’s a work of opening and closing flower blooms hanging from the ceiling just past the front desks. The installation acts as a sort of diversion for people waiting to get into the first interactive exhibit, but makes for an intriguing spectacle to pass the time. 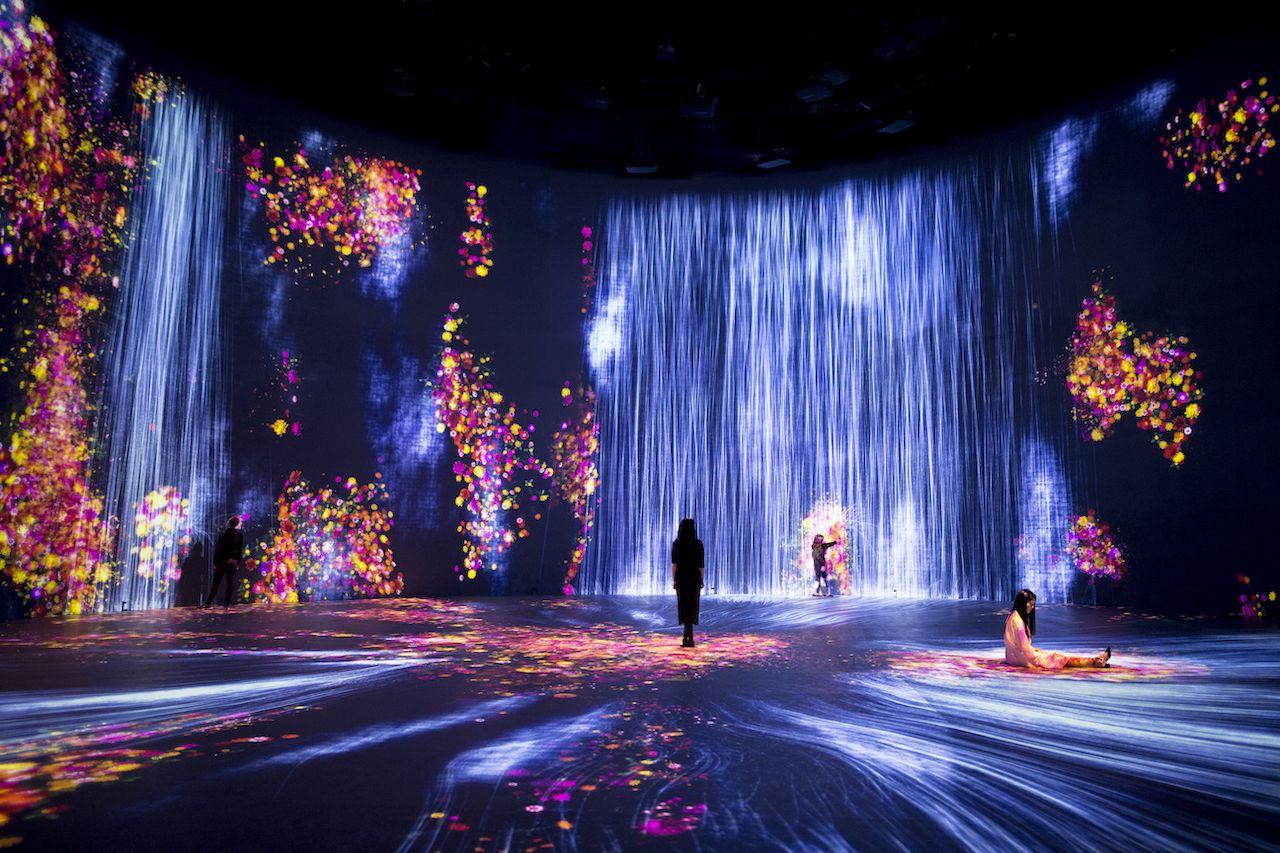 The first full room in Superblue Miami is teamLab’s Proliferating Immense Life — A Whole Year per Year, which as the name might imply puts you in the middle of four changing seasons. Lush summer foliage turns to fall colors, which slowly die away into a barren winter scape, before subtly blooming again for spring.

Guests can help the process along by touching the walls and causing flowers to die, fall, or be reborn. It’s a not-so-subtle reminder that we affect the seasons more than we think. Or, at the very least, it’s a chance to play god for a few minutes.

“The idea is that it’s ever changing, it depends on how people around you are interacting,” says Rodriguez. “You’ll always see something new…a different flower, a different season.”

3. Massless Clouds between Sculpture and Life 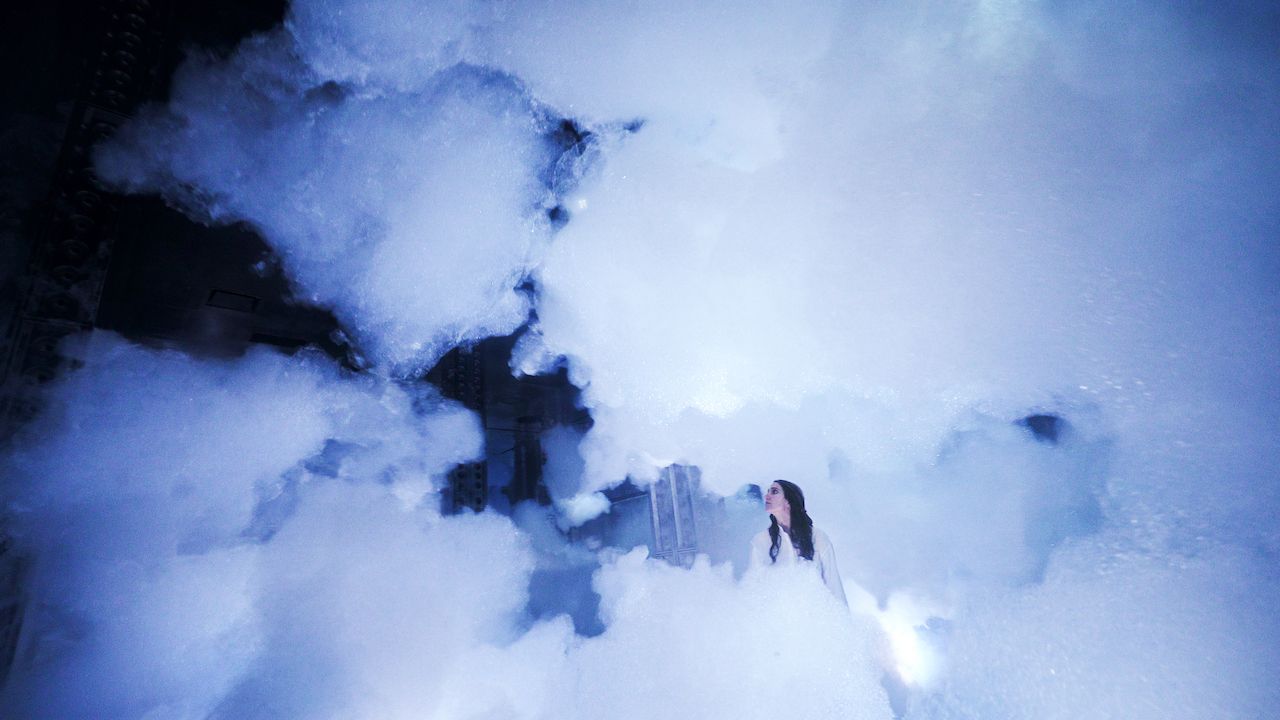 More commonly known as the “cloud room,” this installation is like the most low-key foam party you’ll ever attend, where visitors donning ponchos shuffle over a metal floor through a sea of thick clouds. The disorienting haze of the white bubbles makes for a sometimes-confusing journey. But also makes for some trippy, mad-scientist photo-ops.

Just be sure not to swallow too much of the stuff. It’s not toxic, but it’s not pleasant either, and can leave a mild burning sensation in your throat if you ingest too much. Note Superblue charges an upcharge for this experience, but we highly recommend that you don’t miss it.

After stepping out of the clouds, the next exhibit can be a two-for-one, depending on how you choose to interact. It begins as Universe of Water Particles, Transcending Boundaries, which looks a little like a moving painting of a vertical rainstorm.

But touch the wall and you’ll turn it into Flowers and People, Cannot Be Controlled But Live Together — Transcending Boundaries, A Whole Year per Hour. Though the name may take longer to say than the exhibit does to visit, it’s a lesson in humans’ ability to resurrect nature when we try, as touching the wall brings blooms to desolate spaces.

James Terrell’s white room installation at Superblue was far and away the most ballyhooed part of the museum when it opened. And though some have raved about this stark, sloped space, where changing colors distort your perception and sense of space, more than a few mutters of, “I don’t get it” can be heard as guests leave the room. 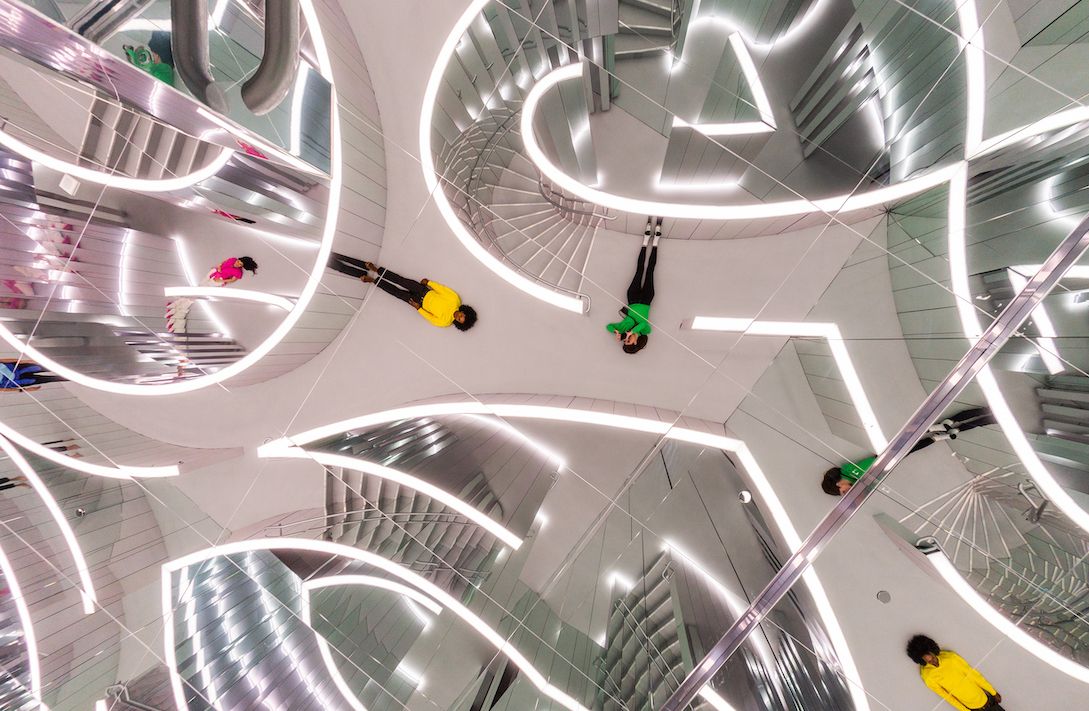 The Instagram star of Superblue’s show is Forest of Us, which begins with a short film comparing the human condition to life in a forest. The film ends, double doors open, and you’re released into Es Devlin’s two-story mirror maze. It’s tailor-made for provocative pictures and confusing journeys, with grand staircases and narrow hallways.

How long should I budget to visit the Superblue Miami museum?

If you’re not up for spending a lot of time making flowers bloom on museum walls, you can easily experience the whole thing in under half an hour. That said, breezing through it that quickly is kind of a waste of money. Rodriguez suggests budgeting about an hour and a half per visit, which from our experience sounds exactly right.

Tickets to Superblue Miami and hours of operation

General adult admission to Superblue is $36 for adults. Seniors, military, and frontline healthcare workers get $2 off. Children are $32.

Where to eat when visiting Superblue Miami

You won’t find any onsite dining at Superblue, but the Caja Caliente food truck has set up shop just outside. It’s a Cuban taco with Caribbean takes on the Mexican classic, like lechon and vaca frita tacos with caramelized onions and black bean pico. Their bowls are also enough for two meals, filled with quinoa, cucumbers, and plenty of meat.

The Caribe Vegan — with plant-based versions of traditional Dominican food — is also a frequent guest outside Superblue. As is Che Grill, a regular, meat-based Latin food truck that’s also amassed a large following.