Floating face down in a Red Sea coral lagoon off the coast of Egypt, I watched five adult male dolphins tumbling about like a litter of puppies. Forty feet from me, they nipped each others’ noses, tugged on fins, and corkscrewed their sleek gray bodies around each other like acrobats. Barely fluttering my flippers, I was careful to follow the first rule of wild dolphin interaction: do not interfere.

That’s when one of those 500-pound predators noticed me. Distracted from the rough and tumble play of his four mates, he pointed his nose upward and rose towards me like a seven-foot rocket.

There was nowhere to hide. Given the modest propulsion provided by my fins, fleeing was not only out of the question, it was laughable. And laughing into my face mask would have fogged it, obscuring the close encounter with a wild dolphin I’d come here for.

I was here, after all, on a dolphin seafari with Eric Demay, the man I call “the dolphin whisperer” — as he has devoted his life to this highly intelligent mammal, learning its habits and behaviors over nearly three decades of work on three continents.

Swimming with wild dolphins has become something of a craze, trending in Hawaii, Australia, and recently the Red Sea. A lot of it is done rather unscrupulously, on day-trip boats with unschooled guides who know little about dolphin behavior. The constant presence of humans, splashing on the surface, grabbing at fins even during the dolphins’ sleep, has put enough stress on the animals that some have fled their normal territory.

When I decided to venture into dolphin territory I wanted to be with someone who had the animals’ interests at heart. I also wanted to have enough time to get over the excitement of that first glimpse and settle into participating in what’s happening around me. A quick dunk in the sea wasn’t going to do it. The six-day seafari with Demay promised the beauty of being with wild animals who, we hoped, would be as interested in sticking around with us as we were with them.

So when I found myself afloat in the Red Sea off the coast of Hurghada, I stayed where I was. 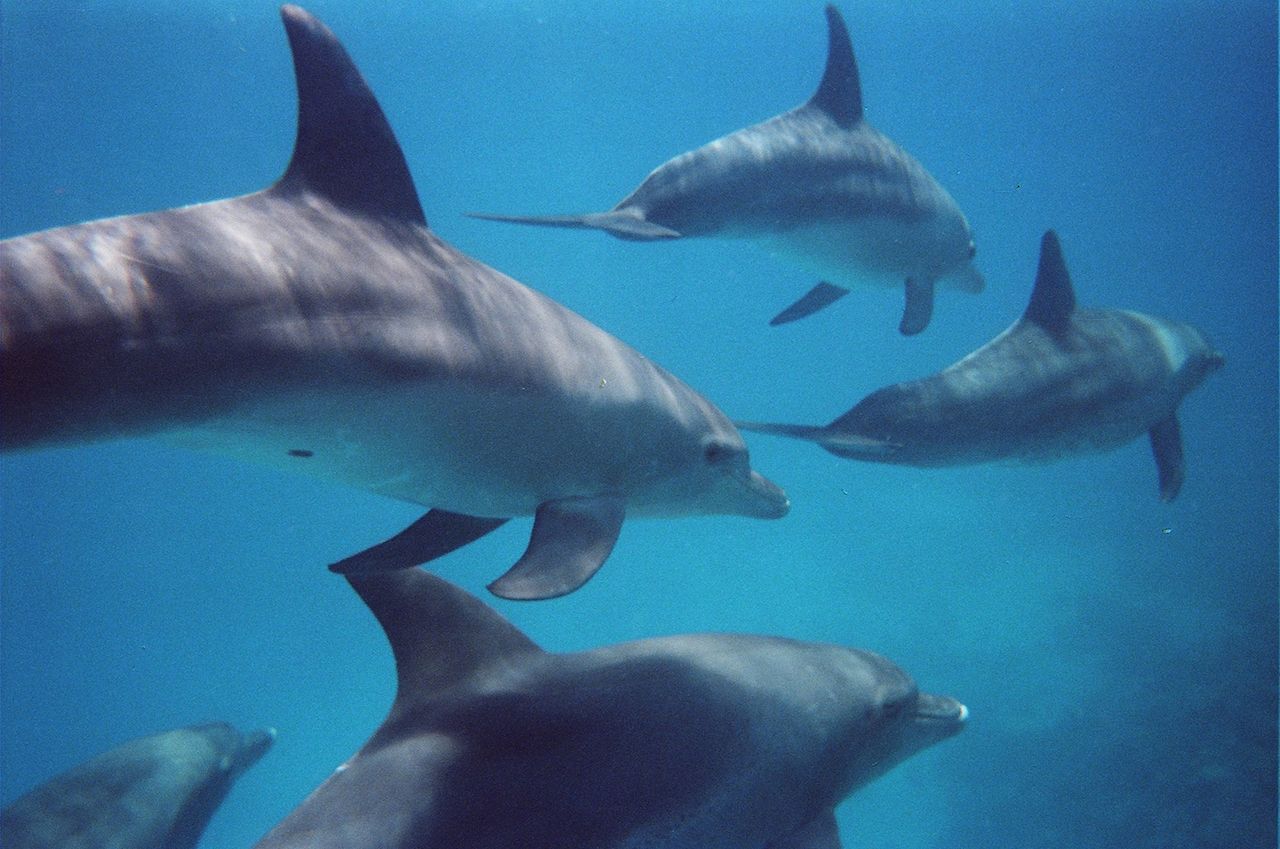 Dolphins are blessed with a face fixed in a perpetual grin. They always seem delighted to see you. That’s a giant leap of anthropomorphic faith, I know, but plenty of studies have shown how we, even as babies, respond to a smile with a smile. Here was one smiley-face dolphin coming my way and I figured if I smiled at him, maybe his four buddies would join us. He reached me in under five seconds, coming within inches of my face before diverting with a lazy barrel roll. He was so close I could count the dozens of fine white gouges where he’d been raked by dolphin teeth, both friendly and otherwise.

His tail did a virtual caress of my body as he swiveled around for a closer look, first with one eye and then with the other, exposing his ivory belly speckled with large beige spots. It was all I could do to keep my arms at my side, so strong was my urge to hug him with joy, but I knew the second rule: physical contact with the wild dolphins is a no-no unless they touch you first.

Curiosity satisfied (his, not mine), he chirped what I decided was a sign of approval, because in an instant his cohort left the white-sand seafloor and rose in a swirling mass to join him. One came at me nose to nose, while the other two twirled around me as if they were an electric mixer and I the batter. I swiveled inside the scrum as they continued their acrobatic play around me. Thus was my introduction to Tursiops aduncus, the Indo-Pacific bottlenose dolphin, smaller cousin of the common bottlenose found in Hawaiian coves.

Hurghada itself is Egypt’s main dive center, reached via a shiny new international airport, where we were collected by Demay’s van driver for the ride to his boat, Shaheen I. Hurghada sprawls along 25 miles of Egyptian coastal desert, just south of the Gulf of Suez. The town, which has well-stocked supermarkets, busy cafes, and several international chain hotels, caters to everyone from beach enthusiasts to snorkelers to avid divers. On our ride to Shaheen’s marina, we passed more dive shops in a 10-block span than exist in most countries, let alone one town.

Mornings began early on our boat, sheltered in the turquoise waters of a coral reef. As the sun lifted above the coastal haze, we’d scan the horizon for the graceful, glittering arc of a leaping dolphin, or the rhythmic rise and fall of a group of dorsal fins. Like most predators, dolphins tend to hunt at night, taking their rest each morning within the reef’s calm waters. Spotting a flash or a fin nearby, we’d writhe into our wet-vest and grab masks, fin and snorkels, underwater cameras, and GoPros. We’d then climb into the Zodiac bobbing off Shaheen I’s stern, with Mohammed, our expert Zodiac operator, at the tiller.

Mohammed, a wiry man in his mid 40s with a ready smile, was dolphin djinn to Eric’s whisperer, able to spot a fin where we saw only a wave. I was reassured knowing that Mohammed’s sharp, sea-savvy eyes were on us while we swam. Mohammed used to be a fisherman; with the catch from his small boat he had been able to provide for his family by selling it to the hotels in Hurghada. As tourism faded away following the 2011 revolution in Egypt, hotels closed, taking with them the kitchens that once supplied his main source of income.

From the Zodiac, Eric showed an unerring ability to figure out the dolphins’ path. He’d grab the bowline, lean back to pull up the prow and as the Zodiac jounced across inlets and channels, he looked like a saddle bronc rider. Except he was wearing a swimsuit. Knowing wild dolphins means not only understanding their behavior, but figuring out how they may respond to outside stimuli. With a small gesture left or right, or a quiet word, he’d direct Mohammed to a point where he felt sure we would intersect them.

The key was for us to enter the water without commotion; no cannonballing, no plunging backwards off the Zodiac as divers like to do. Major splashing, even with flippers, was a big dolphin turn-off. It only took one experience of seeing a big group hightail it away for us to all agree that we’d be very calm and quiet forever after.

After gently entering the water, we’d swim in the direction we expected the dolphins to travel. With a mix of checking above the surface for fins, looking back to Mohammed for directions, and scanning below the surface for movement, we met dolphins every day without disturbing them. About half our group were comfortable free diving to the dolphins’ depth, while the rest of us stayed on the surface. Regardless of our position, the dolphins came and went, and, in some cases, seemed to encourage us to join them, or at least to stay. 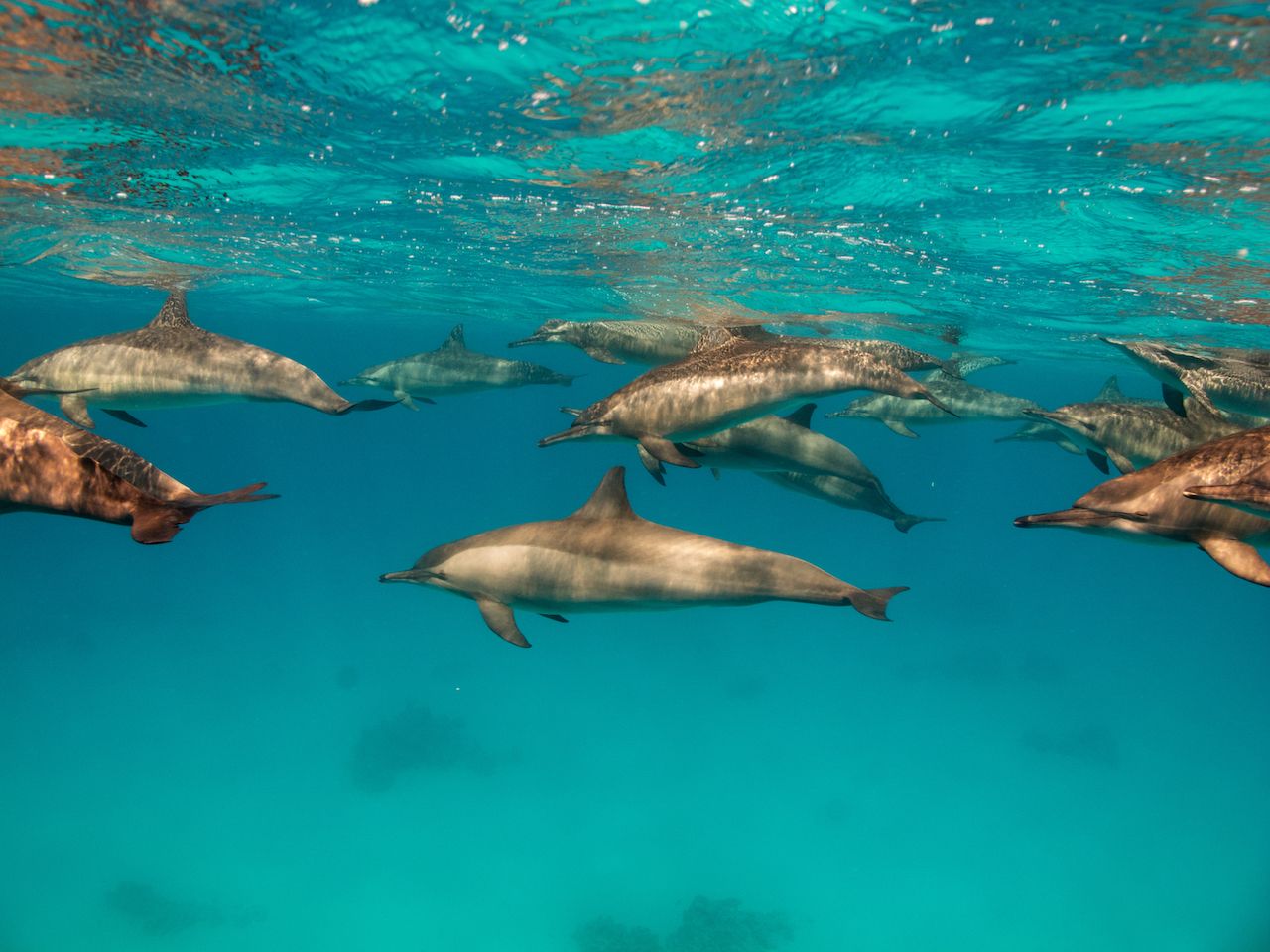 It’s said that when a dolphin encounter goes well, the dolphin is as intrigued by our presence as we are with theirs. Although I’d spent weeks on wildlife safaris in Africa, traversing bush and savannah on horseback, this was the first time I’d experienced a wild mammal be interested in letting a complete stranger be part of their life. Not forever — but at least for some time.

I marveled endlessly at their grace and loveliness. Every time I was close to them — and those encounters of dolphins swarming me happened daily — I felt the profound privilege of a wild being opening their world to me. I felt free to make an idiot of myself; I uttered high-pitched squeaks to see if a dolphin might talk to me, and made silly fluttering motions with my hands hoping to attract a dolphin’s attention.

During midday lulls, Eric would regale us with stories of his dolphin past while a few of us manned the upper deck, searching for the telltale arc of a leaping dolphin. Having spent nearly 30 years working with dolphins, Eric had an enviable history with a number of individual dolphins, identifying several we met by their unique dorsal fin shape.

And then would come the inevitable call, “I see one. Over there!” Everyone would scramble topside to squint and confirm, followed by hours in the water as anywhere from three to 16 dolphins shared their life with us, playing, feeding a baby, fighting for dominance, looking to mate, or simply exploring the waters.

DivingShark diving isn’t as scary as you think — but it is really gross
Tagged
Diving Narrative Wildlife Egypt
What did you think of this story?
Meh
Good
Awesome

As tourism in Egypt rebounds, it’s time to plan a trip to the lesser-known sites of Cairo and Luxor