While Switzerland is known for its majestic mountainous landscapes, the country’s natural assets are not the only attractions worth checking out. From the streets of Berne’s Old City to the modern architectural work of Le Corbusier, Switzerland is home to 12 UNESCO-listed sites that are as magnificent as they are diverse. And the best way to see them is on a road trip.

The Switzerland road trip itinerary below covers eight of the 12 UNESCO sites and takes you to each corner of the country. You’ll pass through regions that speak German, Italian, and French along the way, and be blown away by the small country’s immense beauty. 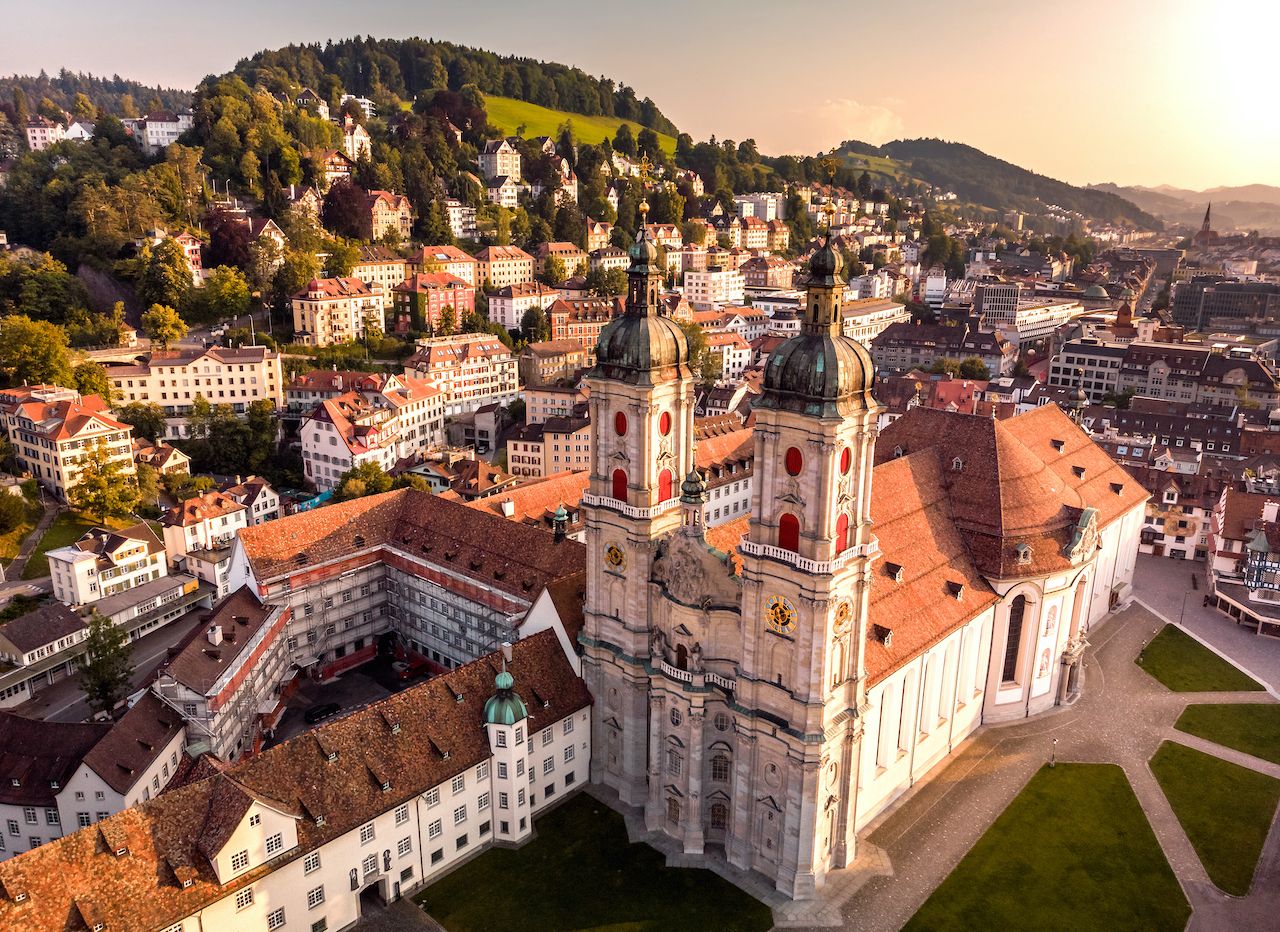 Your Switzerland road trip starts in the secluded northeastern town of St. Gallen. The itinerant Irish Monk Gallus was looking for a quiet retreat and built the abbey here in 612 CE. In the Middle Ages, the abbey became an influential center for religion and the arts, regularly attracting emperors and kings from the Carolingian and Ottoman courts. The Abbey Library and Cathedral are the highlights of the whole complex, with rich interiors. The site gained UNESCO status for its architectural influence and as a developing, continuous center of knowledge, religion, and culture.

Visiting the Abbey of St. Gall and Abbey Library could take up a big chunk of your day. But if you fancy spending more time in St. Gallen, you can wander around the charming old town or pop into the Textile Museum for a completely different vibe than the abbey. 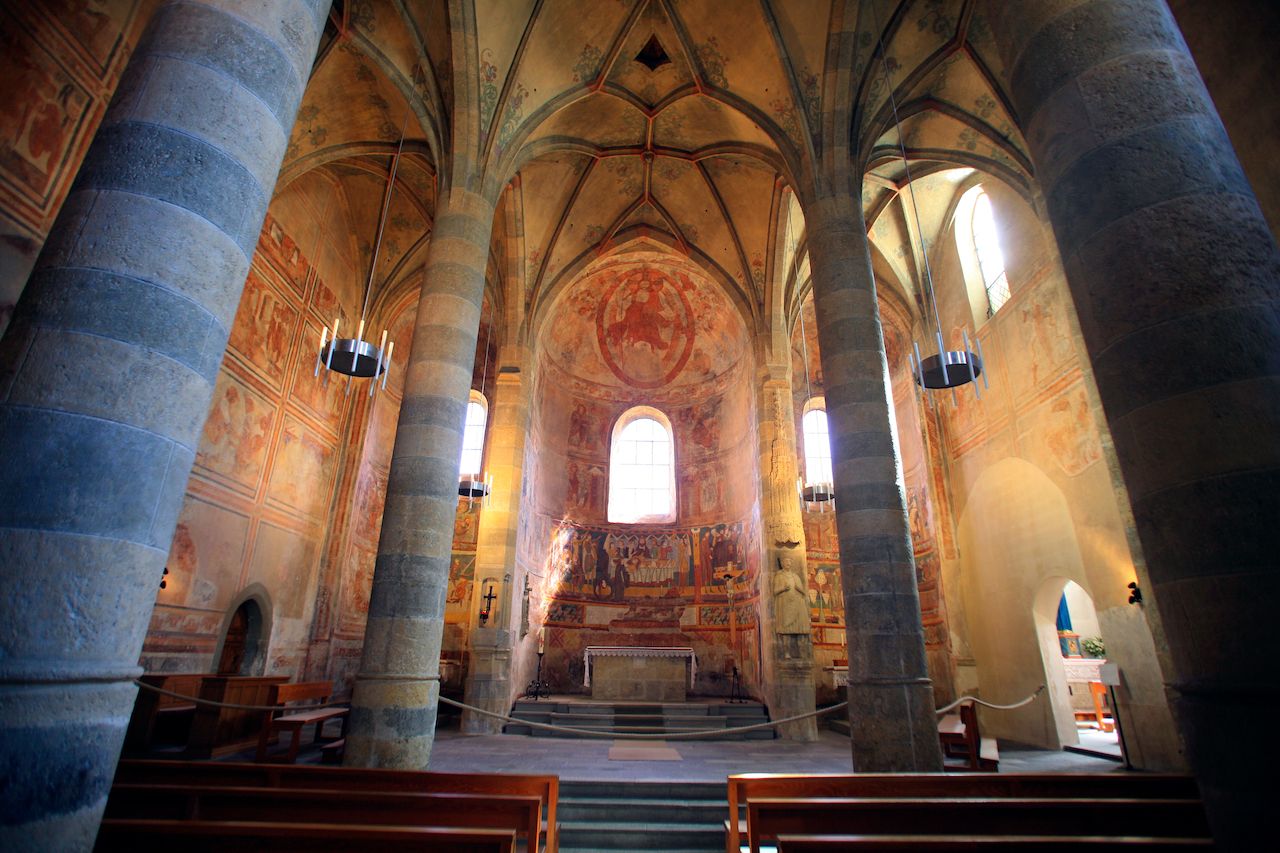 The legend goes that Charlemagne himself founded the Benedictine monastery of St. John around 775 CE. But it was more likely built under Charlemagne’s orders by the Bishop of Chur, for its strategic location. The monastery eventually became a convent, and the Convent of St. John at Müstair made it onto the UNESCO list because of the extensive, well-preserved frescoes inside the property’s church, which date back to the ninth century. The site has also hosted religious activities uninterrupted for almost 1,200 years, as nuns are still active in the convent to this day. Visit the Convent Museum, take a tour of the church and Chapel of the Holy Cross, and even book a night in the maiensäss (a former spring pasture hut) or the guesthouse.

Leave Müstair and start heading toward the Three Castles of Bellinzona, a 3.5-four-hour drive. 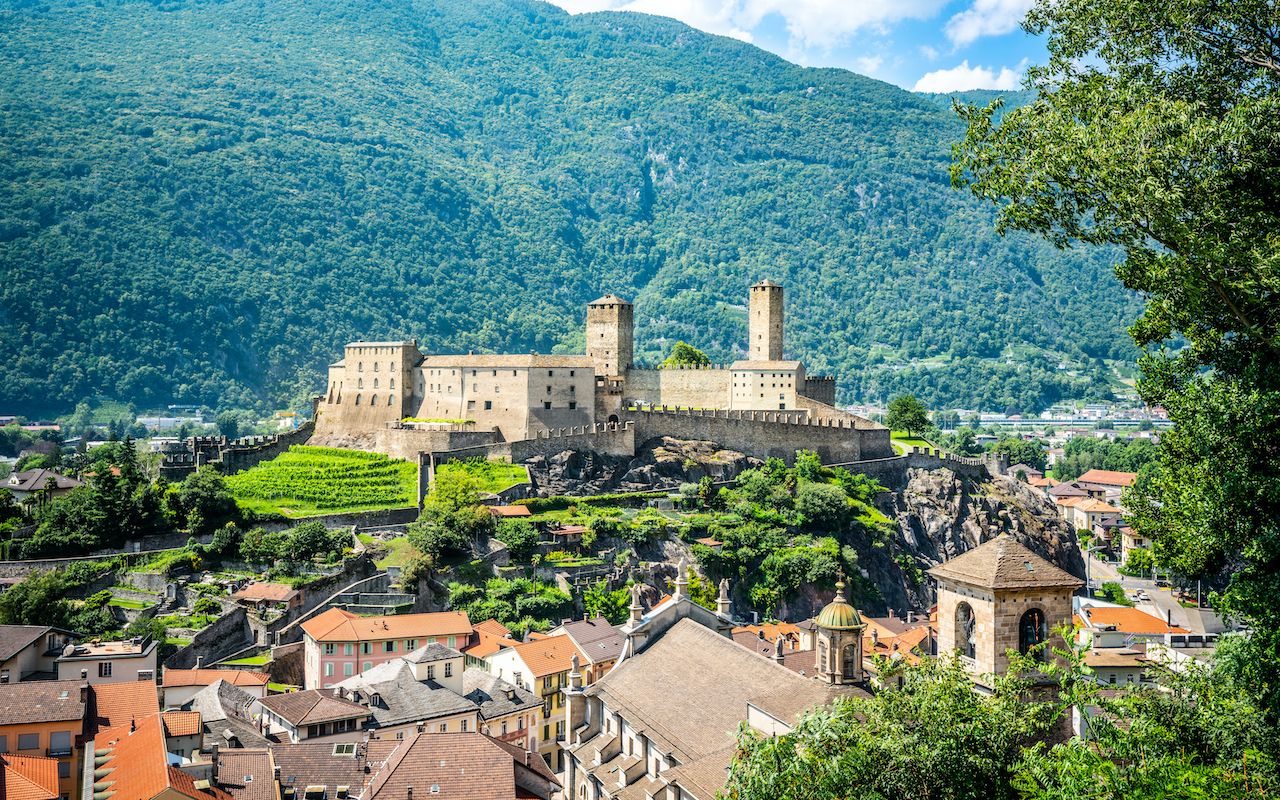 The historic city of Bellinzona, the capital of the Italian-speaking canton Ticino, stands as a testament to medieval defensive architecture. The city’s strategic position called for fortifications, resulting in three castles — Castelgrande, Montebello, and Sasso Corbaro. The 15th-century fortifications made the UNESCO list for their impressive architecture and preservation. All three castles are open to visitors and the Castelgrande and Montebello are home to museums. When you’re done with the castles, tour the Bellinzona old city, and if you’re there on a Saturday, stop by the Bellinzona market for local food, wine, and crafts.

As you’ll be in the Italian-speaking part of Switzerland for this leg of the trip, it’s the perfect opportunity to grab some Italian food. Pizza Napoli has rave reviews from both locals and tourists, as does the classy Ristorante Locanda Orico. Both are within walking distance of the Montebello castle. Bellinzona also has places to stay with views of the castles, like the hostel Ostello Bellinzona or the sumptuous Hotel & SPA Internazionale.

When you’re done soaking up the history of Bellinzona, head south toward Monte San Giorgio, the next stop on your Switzerland road trip. The drive only takes an hour so you’ll have plenty of time to stop by the city of Lugano to see some of its sights. In Lugano, you can stroll down the waterfront of Lake Lugano, get some shopping done on Via Nassa, or relax at the lakeside Parco Civico. 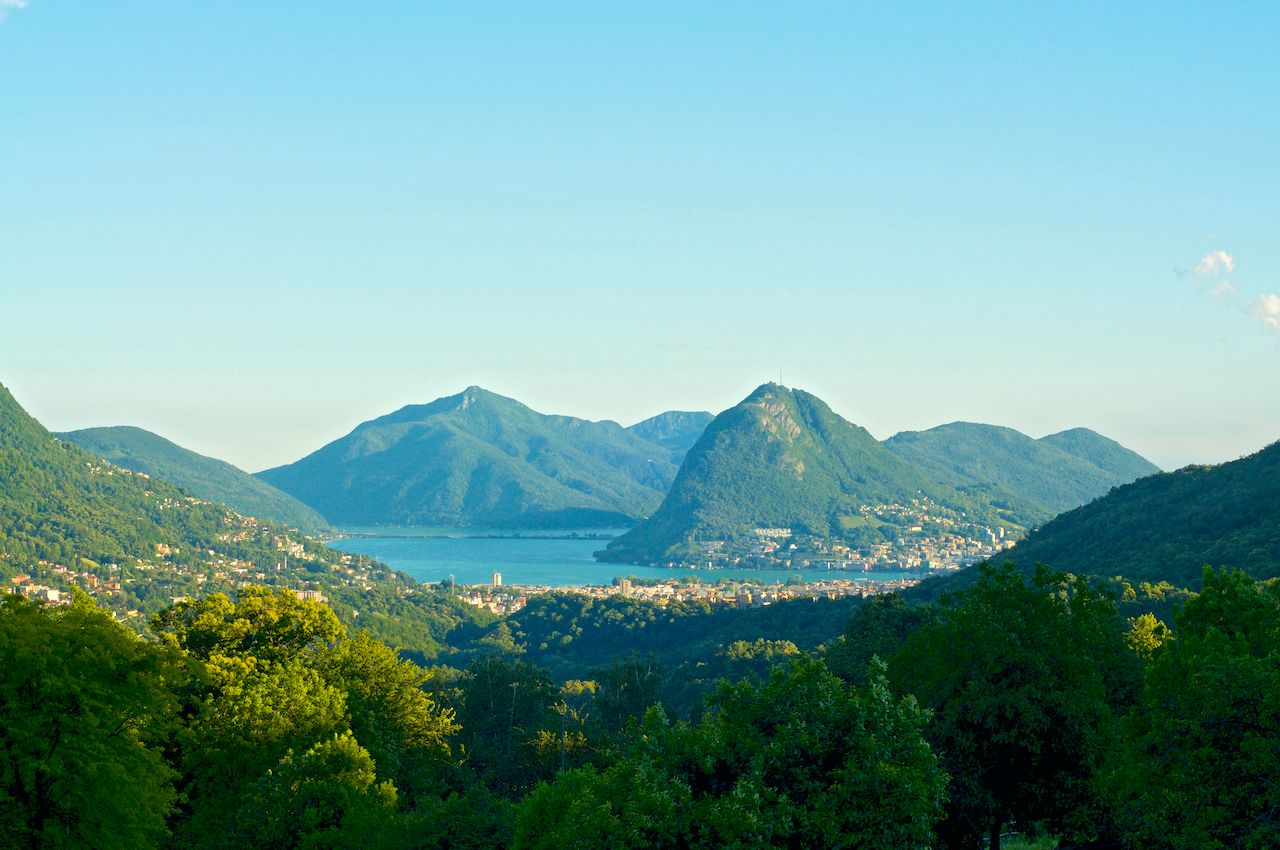 Monte San Giorgio is one of Switzerland’s natural UNESCO sites, home to 240-million-year-old fossils of reptiles, fish, and plants. The wooded mountain beside Lake Lugano has the best fossil record of marine life from the Triassic Period, and visitors can view these fossils at the museum in Meride. You can also hike along either the geo-paleontological path or the cultural trail around Monte San Giorgio to learn more about the ancient sea basin that once existed there.

If you choose to stay the night near Monte San Giorgio, B&B La Crisalide in Meride has stunning countryside views. Alternatively, the Hotel Walter Au Lac in Lugano is highly rated and has beautiful lake views.

As you make your way toward Jungfrau-Aletsch, you can either take the southern route through Italy via the E62 or stay in Switzerland and use the A2. 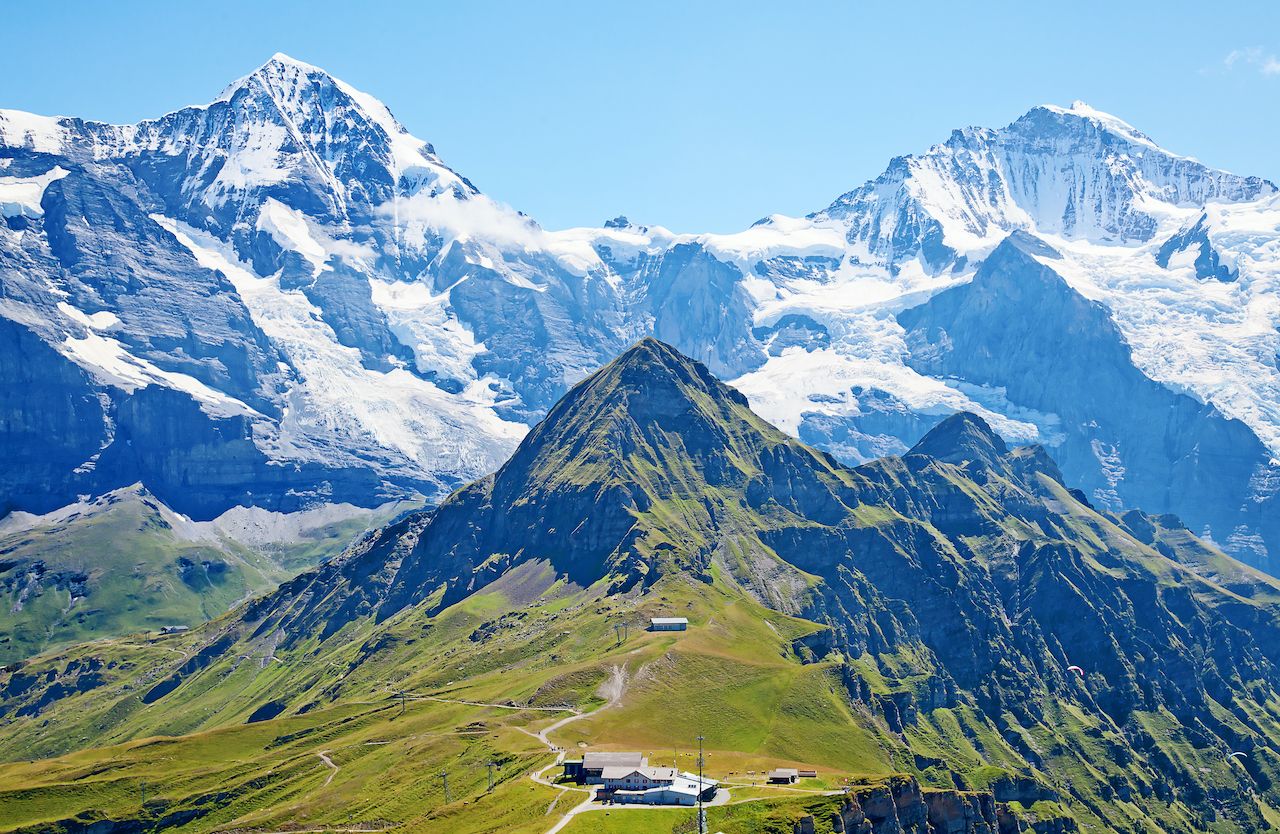 Photo: https://www.shutterstock.com/fr/image-photo/famous-mount-jungfrau-swiss-alps-115483111
It wouldn’t be right if the Swiss Alps didn’t make it onto the UNESCO list, and Jungfrau-Aletsch-Bietschhorn delivers. The region is home to Europe’s largest glacier. Although this entry is a Natural Heritage site, its exceptional landscapes are also recognized for inspiring European art, literature, mountaineering, and alpine tourism.

We recommend parking at Grengiols, a town on the southern edge of the glacier, then take a cable car to the mountain town of Bettmeralp. From Grengiols, you can also head to the World Nature Forum in Naters — only a 30-minute drive — and check out interactive exhibits about the World Heritage site. Reaching the “Top of Europe” at Jungfraujoch, on the northern edge of the glacier, may prove difficult by car but you can take a three-hour train from Naters. For the more adventurous, there’s also 15-stage hiking around the glacier.

You can choose to spend the night in Bettmeralp, in a chalet-style lodging like the Hotel Slalom or Hotel Bettmerhof. Naters and the neighboring town of Brig also have some nice places to stay, such as the swanky Hotel Ambassador Brig or the Hotel Adhhoc just across the street from the World Nature Forum.

If you depart from Brig, the Le Corbusier UNESCO site is only one to two hours away. On the way, you’ll pass through the town of Saint-Léonard, where you can take a subterranean boat ride on the Lac Souterrain (underground lake). It’s the biggest underground lake in Europe, and the site has 30-minute guided boat tours every day. 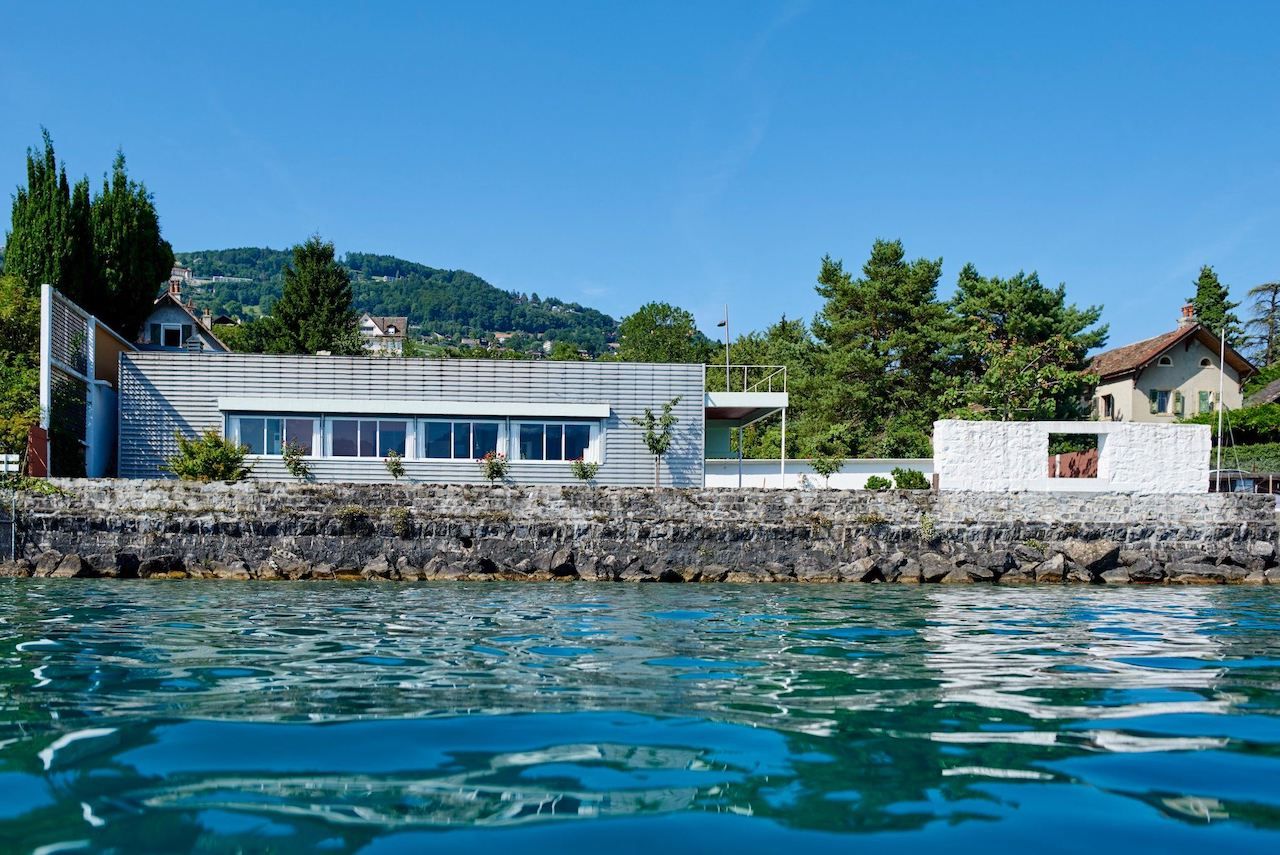 Corseaux is situated on Lake Geneva, and after you hit Villeneuve, your route will skirt along this massive lake. The towns and cities sitting on Lake Geneva are worth visiting before you get to Corseaux, especially Montreux and Vevey.

The Villa “Le Lac” by architect Le Corbusier is just outside Vevey, in the small town of Corseaux. It’s one of two buildings in Switzerland designed by Le Corbusier and one of 17 sites worldwide that make up the UNESCO listing. Le Corbusier’s work has UNESCO status for its contribution to the Modern Movement, which played an integral socio-cultural and historical role in the 20th century. The site is open for visits on Fridays, Saturdays, and Sundays.

Montreux, Vevey, and Corseaux all have waterfront restaurants serving up delicious seafood. Le Metropole in Montreux has outdoor seating that looks out on the lake, plus you can sample classic Swiss dishes. If you want to stay the night in the area, in a room with a lakeside view, then the super swanky Grand Hotel du Lac in Vevey should cut it. For a pared-down, less expensive option, there’s also the Hostellerie de Genève.

The first town to visit among the vineyard terraces is Saint-Saphorin, just a few minutes down the road from the Le Corbusier site. 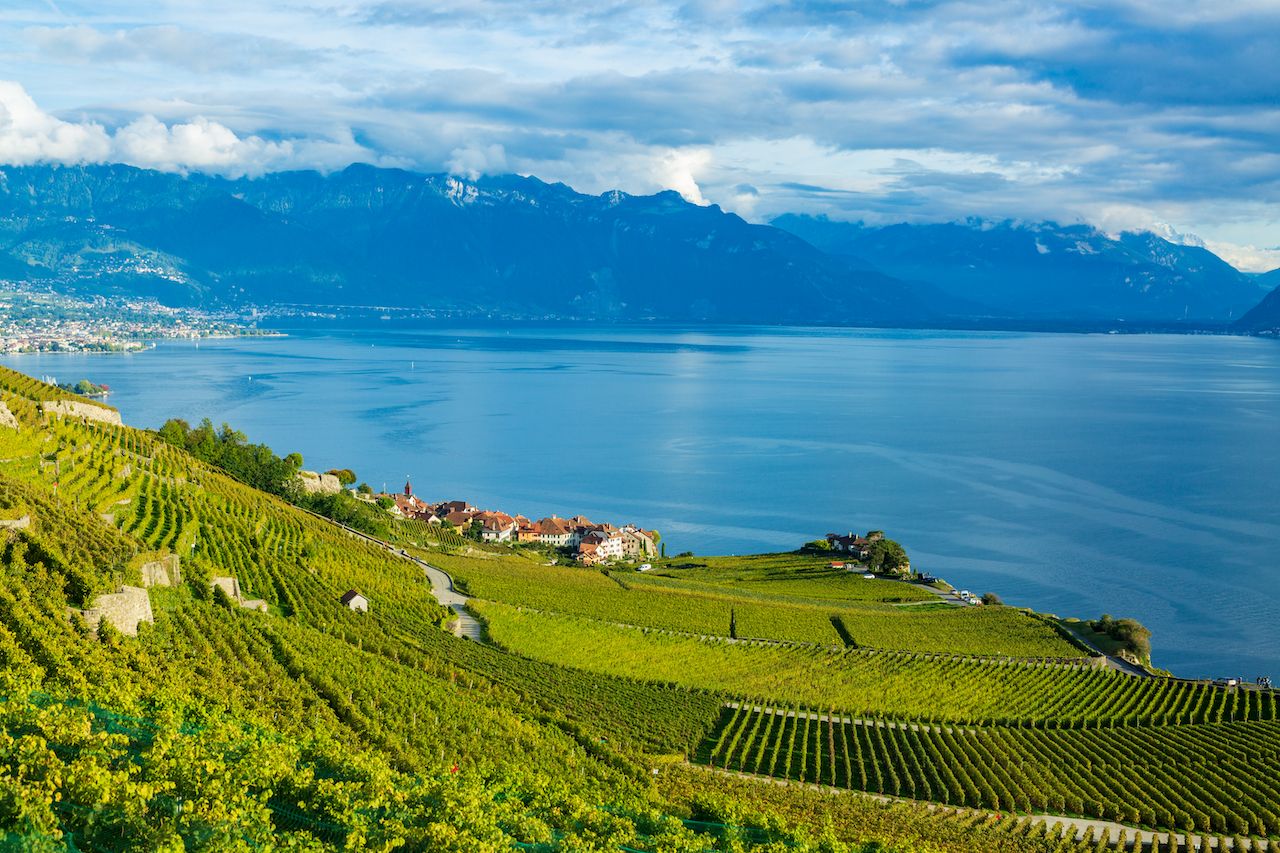 The ancient vineyards growing on the cliffs that buttress Lake Geneva cover 800 hectares. The best way to visit them is to park your car and hop on a train. The local train that starts at Vevey and runs to Puidoux has been dubbed the “Train des Vignes” because it gives you the best views of the vineyard terraces. You’ll want to get off at Chexbres, where you can embark on informational walks around the vineyards or hop on the tourist train-on-wheels “Lavaux-Panoramic” that goes from Chexbres through the various vineyard pathways. Several winemakers also open their wineries to visitors and share their process, including the Cave de Moratel.

The vines of Lavaux can be traced back to the 11th century. The well-preserved landscape and continuous adaptation of cultural traditions in winegrowing in the region make the vineyard terraces worthy of UNESCO status.

When you’re ready to head to the next site, head back to Vevey by train to retrieve your car, then make the one-hour drive to the Prehistoric Pile Dwellings Around the Alps.

Prehistoric Pile Dwellings Around the Alps 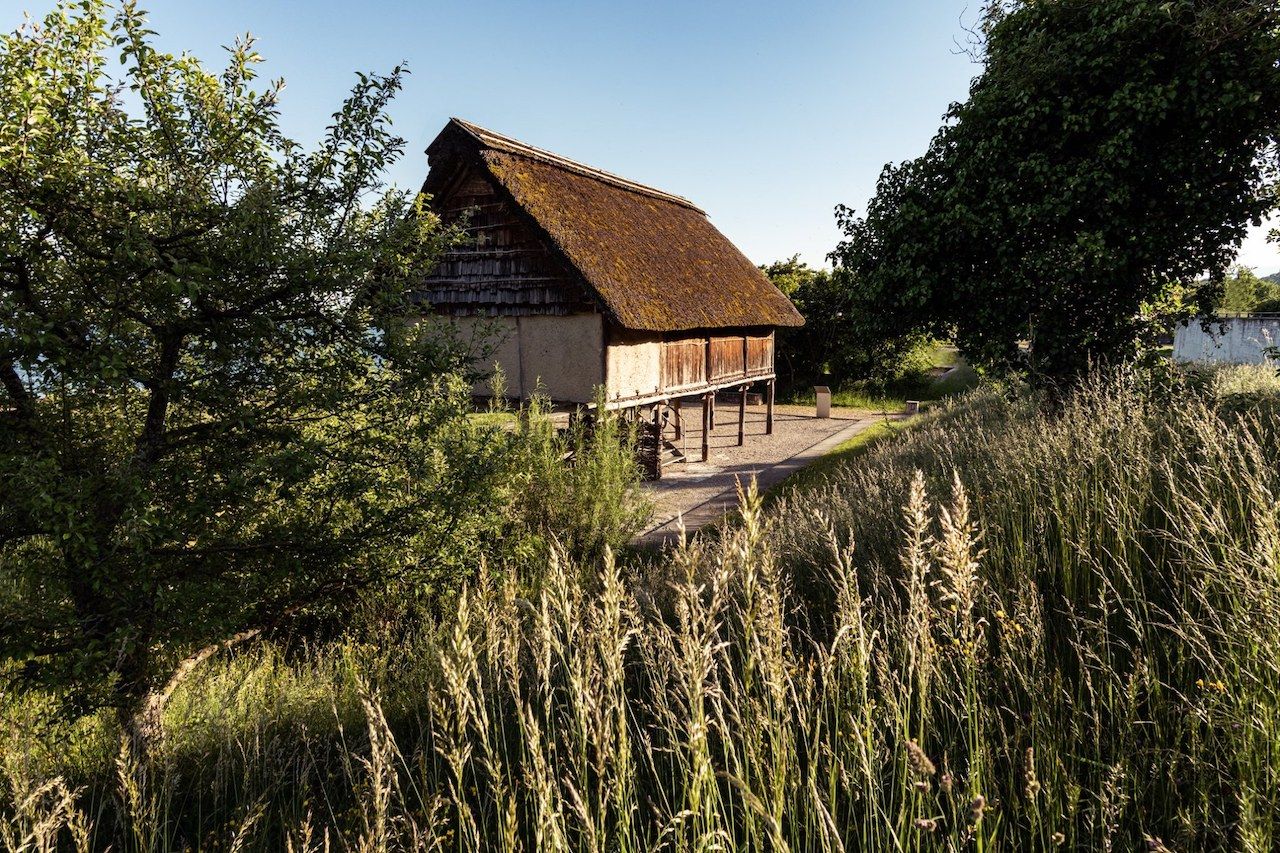 The UNESCO sites for the prehistoric pile dwellings are scattered across several cantons in Switzerland. The best ones to visit are on the shores of the Lac de Neuchâtel. Start with the Village Lacustre de Gletterens, which is open every day from May to October. Then, drive 30 minutes around the lake to Hauterive to see the Laténium Park and Museum of Archaeology. The museum has an exhibition about the lake dwellings in its permanent collection, and the archaeological park is a rebuilt Bronze Age pile dwelling that’s open year-round.

At each site, you’ll learn about conservation efforts for these pile dwellings and why they’re some of the most important archaeological sources for the study of European societies between 5000 and 500 BCE.

If you’re looking to grab a bite in Hauterive, the Laténium Museum restaurant offers good food with a view of the lake. Restaurant Le Silex is one wharf over from the museum and has an outdoor patio. For a place to stay with an old-world vibe, head to Les Vieux Toits. The hotel is only a few minutes away from the museum.

From Hauterive, it’s about a 40-minute drive to the center of Bern, where the Old City is located. Bern is the last stop on your Switzerland road trip. 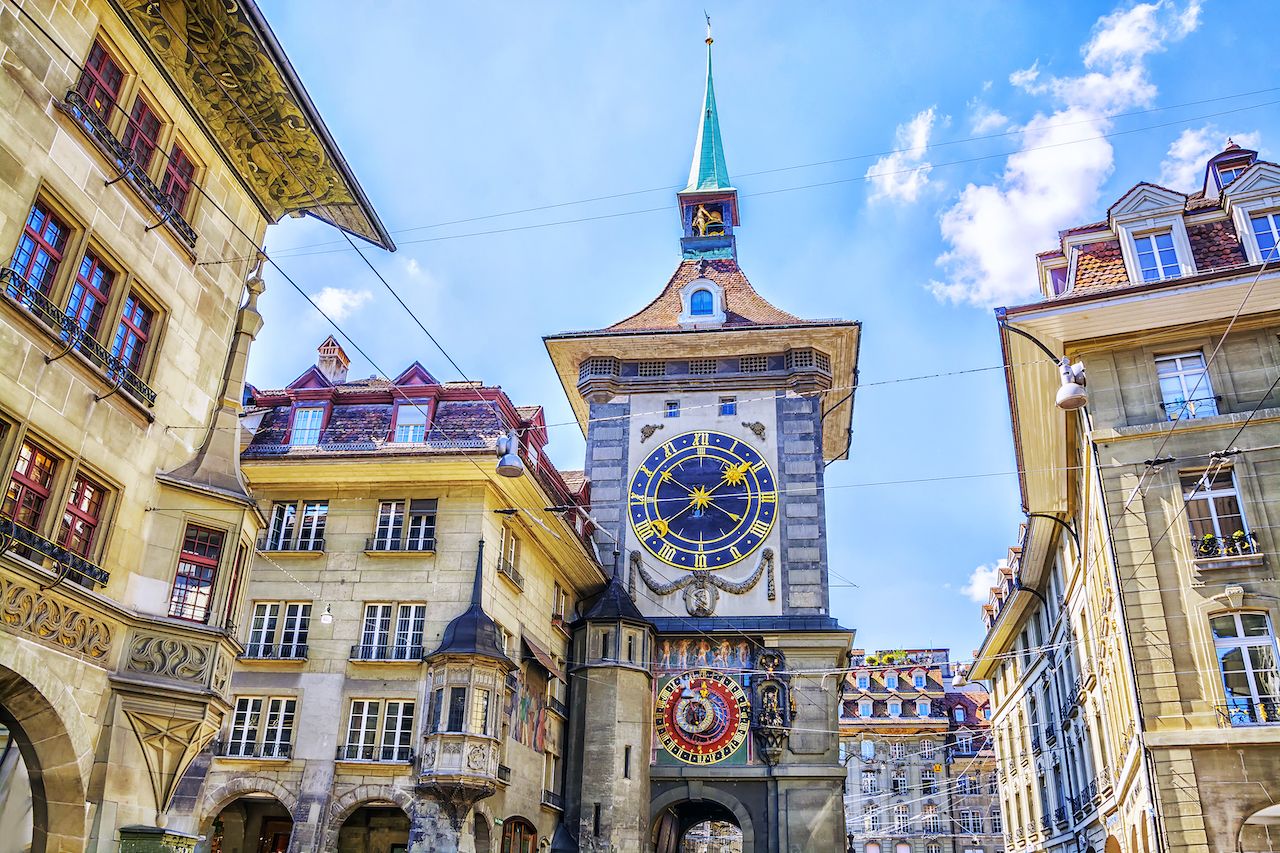 Bern’s Old City is a clash of architectural styles dating from various points in the city’s long history, which stretches back to the 12th century. It got UNESCO status for its exceptional planning and well-defined urban structures, which you’ll notice as you amble along the wide streets and underneath the arcades. The Old City is also full of shops — including a few places to buy a Swiss watch. On the edge of Bern’s Old City is the Zytglogge, the medieval mechanical clock tower and astrolabe.

Bern’s Old City is well worth exploring for a morning or an afternoon. You can grab a coffee or lunch at one of the many cafes or restaurants, like the cool underground bar the Old City Irish Pub, or the restaurant Krone for something more Swiss. Then, see the rest of the sights in Bern, like the Federal Parliament Building, the massive Cathedral of Bern, or cross to the other side of the Aare to visit the Alpines Museum of Switzerland.

The city also has a variety of places to stay, from chic hotels near the Old City like The Bristol to the quaint country-estate-like Bed & Kitchen am Tavelweg.

Charmey is the ultimate mountain town for exploring the Swiss Alps

The 7 most epic Matterhorn experiences

The 7 most adorable villages in Switzerland

The Glacier Express is the most scenic train ride in Europe

5 things US cities can learn from Bern, Switzerland