The Thanksgiving school break is a great opportunity to go somewhere with the family. You may find yourselves across the country at grandma’s house or, if you’re lucky, at a beachy seaside destination. The nagging question, though, is how to take the usual Thanksgiving traditions with you when so many of the normal aspects of the holiday are out of your control.

Most kids really do like traditions. They may look forward to particular dishes, and no longer having cornbread stuffing, say, may feel off. Or you may be somewhere where finding a whole turkey to roast — and somewhere to cook it — isn’t even possible. How can it feel like Thanksgiving when you’re eating turkey tacos?

When you don’t have the usual meal

Our family actually ate said tacos in Sayulita, Mexico, a few Novembers ago. When our oldest daughter saw the spread of food, she couldn’t hold back the tears. She’d had fun on the beach that day, but the unusual menu felt like she was about to miss out on one of her favorite holidays.

Her tears dried up, though, when we focused on what Thanksgiving is really about. Together with the other families there with us, we participated in fun activities that have since become annual traditions. Here are those traditions, and a few more recommended by families who never seem to spend Thanksgiving in the same place. 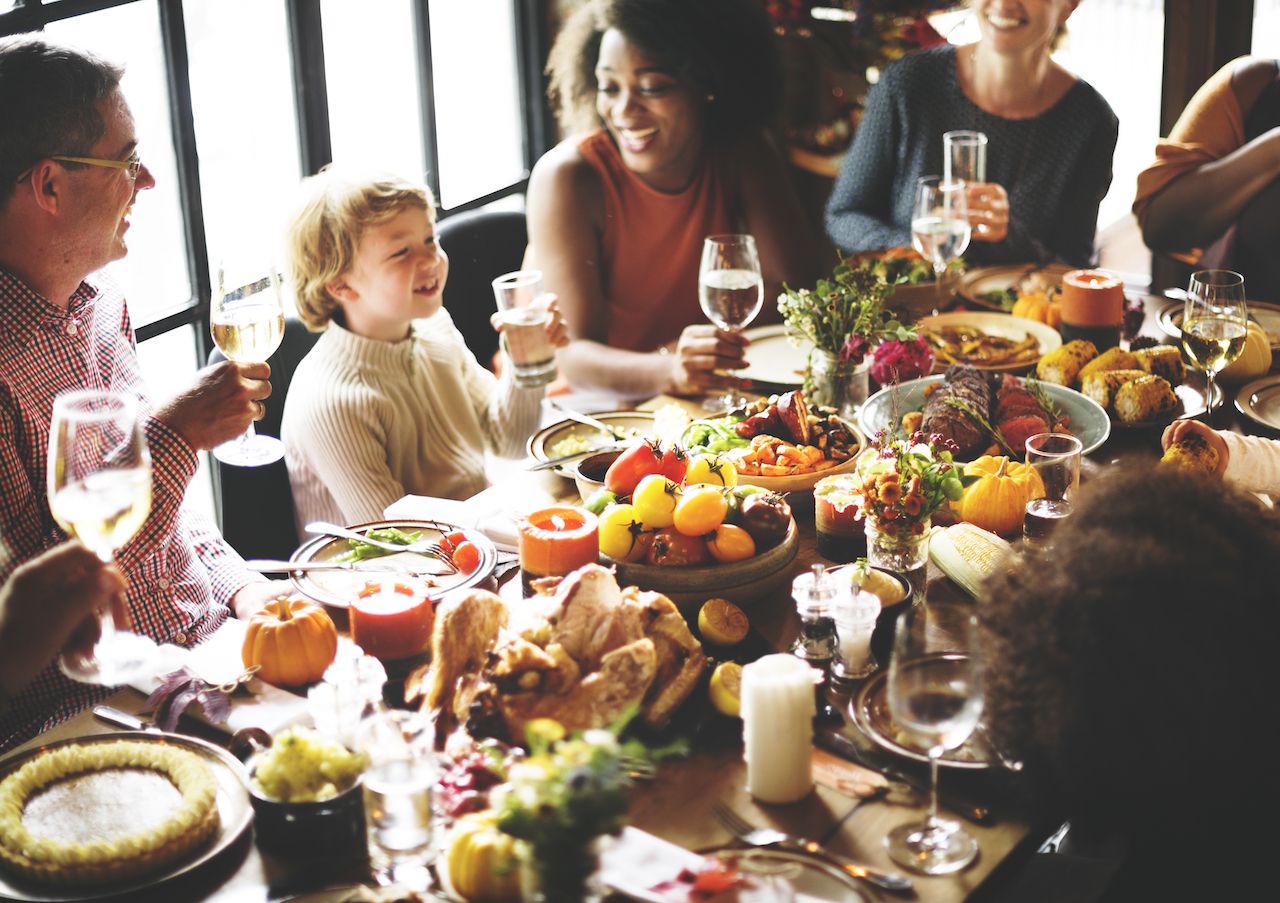 The most obvious tradition focuses on what Thanksgiving is all about: giving thanks. So it doesn’t matter if you’re sweating in Aunt Em’s overheated Minnesota cottage or about to eat a soulless turkey dinner at a resort in Maui. Before you dig in, you can still stop to say what you’re all thankful for. You’ll be amazed at what the youngest family members can surprise you with.

A fun twist on this is to have everyone write down what they are thankful for, and put it in a box. Everyone picks one paper out of the box, reads the answer, and tries to guess who said it.

Put one or two people in charge of looking up some factoids and putting together a quiz. They can ask anything from the name of the tribe who helped the pilgrims to the year Thanksgiving became an official holiday. They could inquire what foods were actually eaten on the first Thanksgiving or how many pumpkin pies we now consume on this November day (that would be 50 million pies).

Give everyone a piece of paper and list the questions as multiple choice. At the end, tell everyone the answers and tally up the correct responses. People will laugh or gasp. Did you know there are five places in North America called Potato Island? And, honestly, who would ever guess 50 million pumpkin pies?

You can extend the Thanksgiving tradition to the dinner conversation itself, which can also be a handy trick to avoid certain topics in these heated political times. Ask your family members, “On Thanksgiving, would you prefer to have turkey or to be at the beach?” or “Would you prefer to volunteer at a soup kitchen or wait in line to get a new TV on Black Friday?”

Questions like these remind us of what really matters on Thanksgiving, and discussing them makes us pause to think about that. Some families really look forward to discussing their either/or preferences, and seeing how the kids’ answers mature (or not so much) over time. 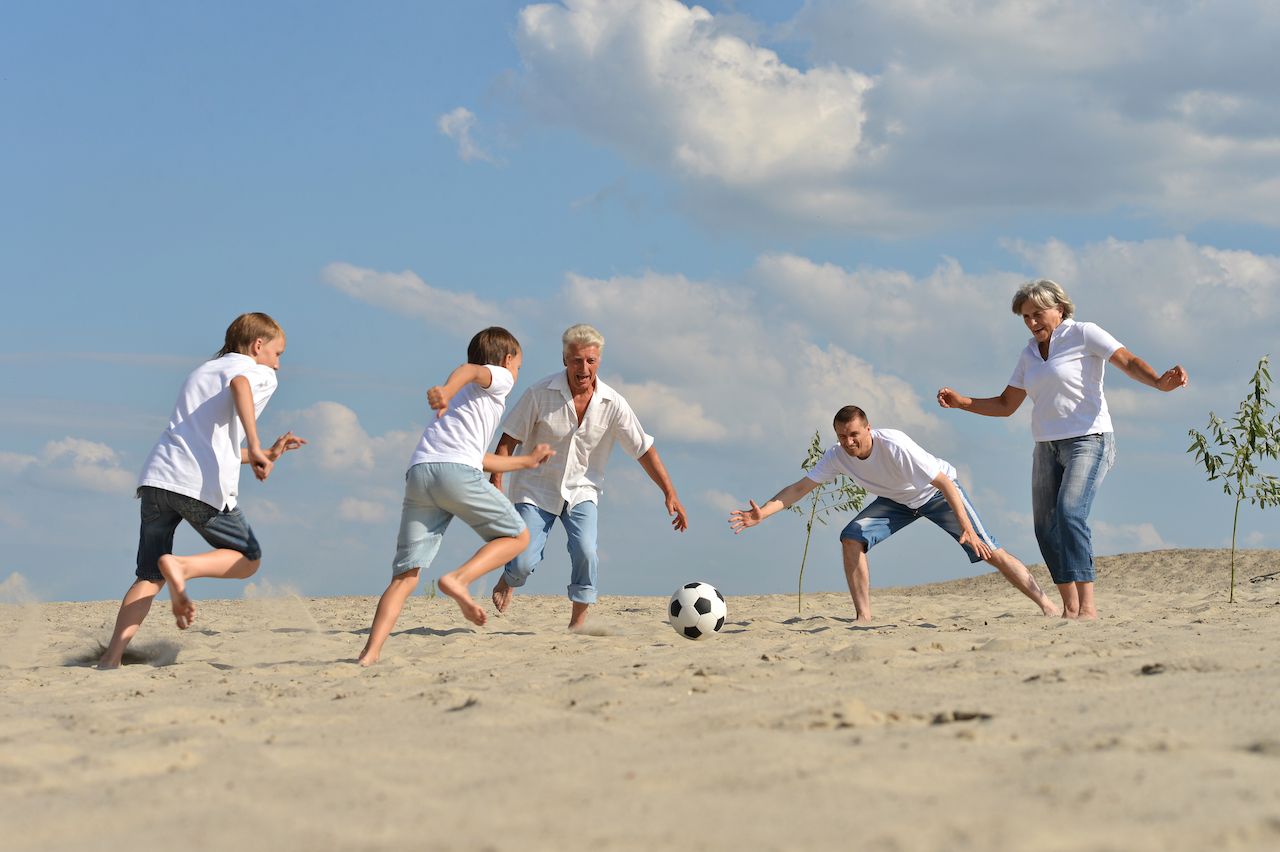 Unless it’s raining or there’s a foot of snow on the ground, you can always bring a soccer ball or a football outdoors. Have the folks who aren’t cooking get the kids together for an informal game. If some among you aren’t sporty, they can be refs or even just photograph the event. The point is to bring everyone together to do something as a group. If you can’t go outside, then pull out the board games.

Going for a walk after a meal isn’t a particularly common thing to do in the US. But it should be — at least on Thanksgiving Day. Wrangle everyone together for a walk in the neighborhood after dinner. The walk will help digest the big meal as you appreciate the cool evening air and maybe have a nice chat. A post-meal stroll can become a memorable occasion, almost precisely because it’s such a rare thing to do.

Some know this game by other names, but “Family” suits it best for Thanksgiving. The more people you can get to play the better. After dinner — and maybe your walk — have everyone write down the name of one person and put that name in a hat. The name can be of a historical figure, a fictional character, a present-day celebrity, or even the name of a sibling or pet.

One person in charge reads all the names off, and everyone tries to guess who wrote what. The person whose name is found out then joins the “family” of the person who guessed it. As people keep guessing, each family grows until you’re down to two big “families” trying to suss out the remaining names.

Others prefer to play charades after the meal. Some play bingo. You can choose the game. The point is that when the kids have fun, they’ll be asking to play it again the next year — no matter where you are. Bam. You now have a new family tradition. 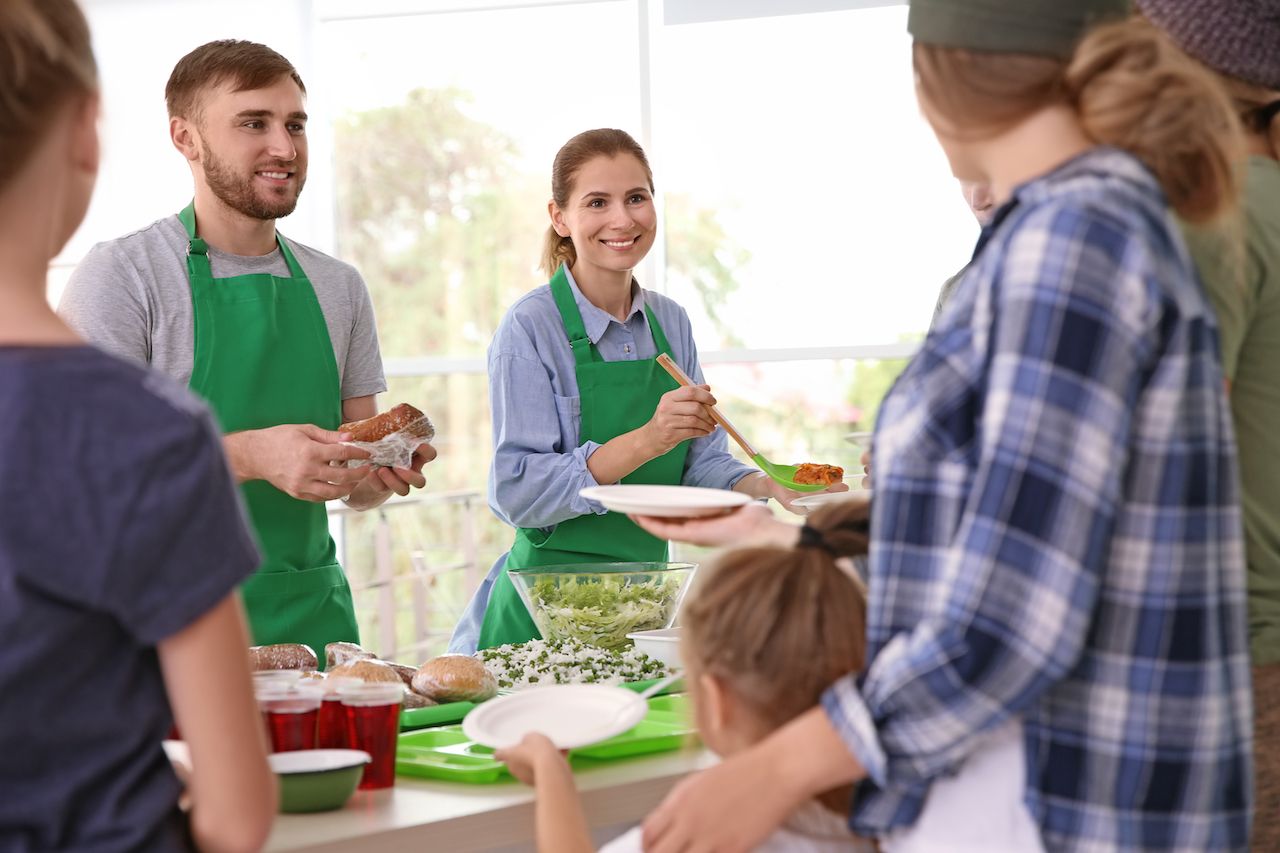 Your child’s school or your local church might organize events where you cook food to bring to a food pantry, or you may go to a soup kitchen to actually serve it. But if you’re not at home, this may seem harder to do. In fact, if you’re anywhere in the US this Thanksgiving, there’s a good chance you can find volunteer opportunities.

A quick glance online or a conversation with the locals will turn up multiple ways to give back — from putting together food baskets for the needy to joining a 5K race the weekend after Thanksgiving to fundraise for a good cause.

Food + DrinkThe Signature, Iconic Pie for Every State in the US
Tagged
Family Travel Food + Drink Holidays
What did you think of this story?
Meh
Good
Awesome