The metropolitan region of Tokyo is home to more than 36 million people, making it the most populated metro in the world, but a few architects have their eyes on a new record for the Japanese capital: the first city to have a mile-high skyscraper.

The project began in 2016 when the architecture firms Kohn Pedersen Fox Associates and Leslie E. Robertson Associates proposed the tower and its surrounding structures as a way to shield Tokyo Bay from natural disasters while accommodating a growing urban population. If built, the appropriately named Sky Mile Tower could house up to 55,000 people.

When the new World Trade Center in New York City was completed in 2014 at a symbolic 1,776 feet high, it joined an elite club of about 100 “supertall” skyscrapers, or structures taller than 984 feet that are inhabited year-round. However, at 2,717 ft, the Burj Khalifa is a member of an even smaller club: the “megatalls”, of which there are only a handful in the world.

The Sky Mile Tower would be in a league of its own. At 5,577 feet, it would reach nearly half the height of Mt. Fuji. 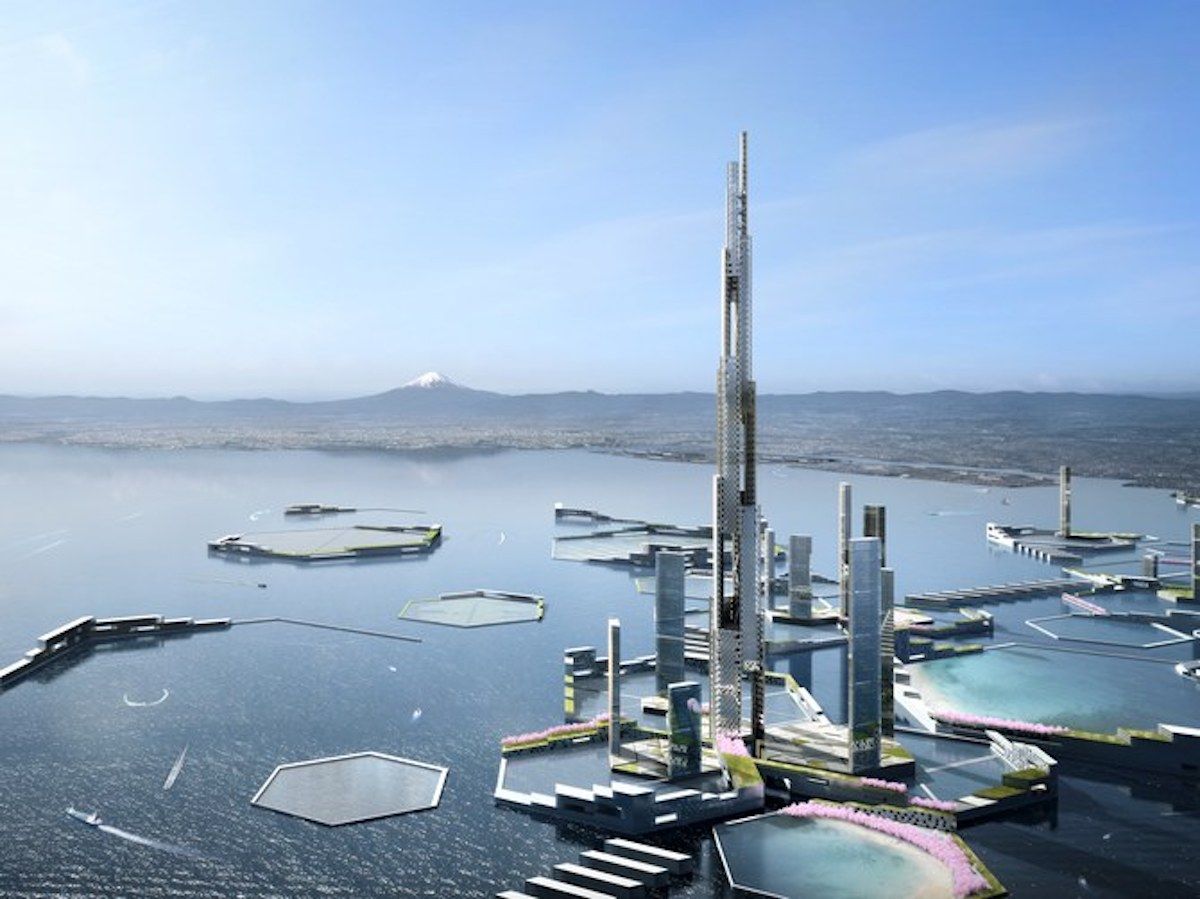 At this height, the power of the wind slamming into the sides of the building is just as threatening to the structure as earthquakes and tsunamis, so megatalls have to come up with designs that “fool the wind.”

For instance, the facade of the Shanghai Tower twists 120 degrees from top to bottom in order to reduce wind loads, while the Shanghai World Financial Tower’s architects cut a massive trapezoidal out of the upper floors to accomplish the same feat.

To protect itself from the wind, the Sky Mile Tower is built in interlocking segments that allow wind to pass through the core of the building.

As pumping water a mile into the air would be astronomically expensive, the tower would be equipped with “cloud harvesting” technology that would feed water tanks at different levels.

While futuristic cloud-harvesting megatall structures are cool, it is at the base of the tower where residents would see some of the best amenities.

Like most coastal cities in the world, sea level rise poses a serious threat to Tokyo. In order to protect the city, the Sky Mile Tower would be surrounded by hexagonal structures that would serve as a barrier to storm surges and tsunamis. There are several ideas about what to put inside these structures, including energy and food farms, freshwater reservoirs, and beaches for residents. Aside from the beaches, residents would also have access to libraries, restaurants, shops, hotels, and gyms at various levels of the tower.

If accepted, the project would be scheduled for 2045. However, a project like this would be almost prohibitively expensive and exceptionally difficult to construct. Then again, Tokyo is already working on the tallest timber skyscraper in the world.

28 dizzying photos from the top of the world’s tallest skyscrapers
Tagged
Art + Architecture News
What did you think of this story?
Meh
Good
Awesome