Known as the happiest country in the world, Finland is a growing travel destination in the Nordic region. Perhaps one reason why the Finns are so happy (and a delicious reason for a visit) is the local cuisine. Finnish food is simple, fresh, and includes plenty of local ingredients sourced from the forests and lakes Finland is known for. Here are 10 traditional Finnish foods everyone should try on their next trip to northern Europe. 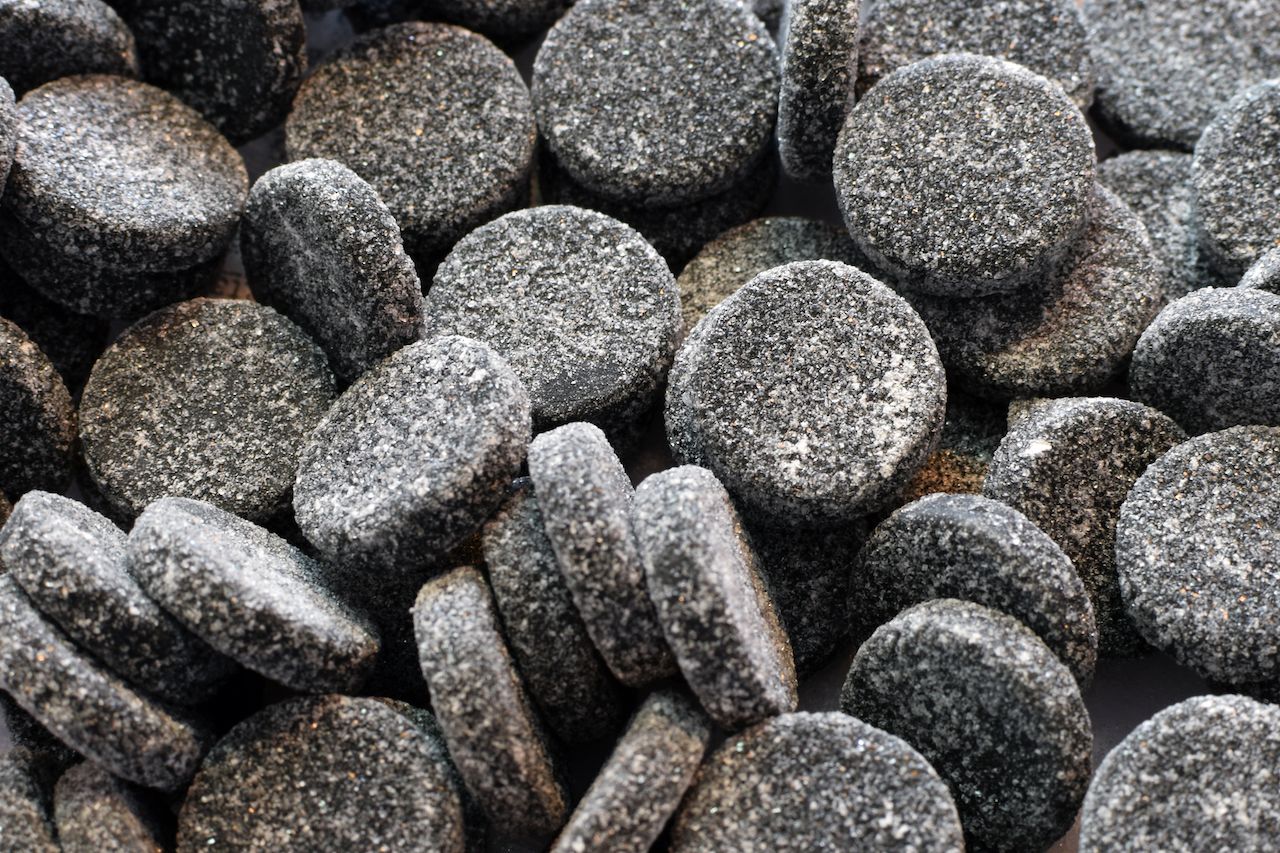 Not to be confused with the licorice found in the US, this pitch-black candy is flavored with ammonium chloride to give it a strong, salty kick. Most people may not love it on the first try, but for Finns who have grown up eating it, salmiakki is nothing short of addictive. Even referred to as “black gold,” Finns take salmiakki with them when they go travelling.

In addition to dozens of different salmiakki candies, you’ll find the salty licorice flavor in ice cream, chocolate, fudge, and one of the most popular mediums: vodka. An easy way to sample this treat is to pop into the candy aisle of the nearest supermarket. A small box of Fazer salmiakki is a good way to start. For those looking for something super fiery, go for turkinpippuri, a hard salmiakki candy filled with spicy salmiakki powder. 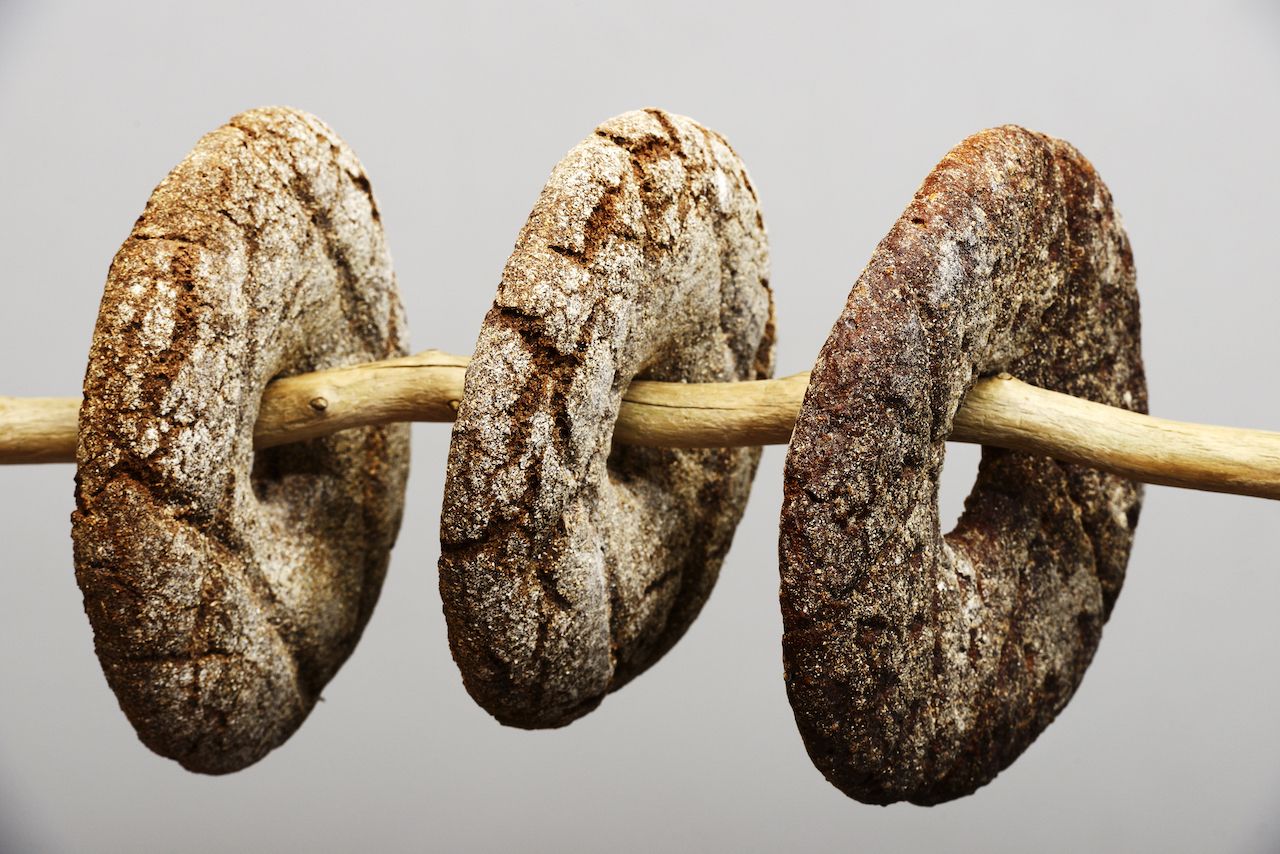 Rye bread is so beloved by Finns that it was voted the national food in 2017 (the same year Finland celebrated its 100th year of independence from Russia). Eaten for breakfast, as a side at lunch, and as a snack, ruisleipä is a staple of the Finnish diet that’s often served with ham and cheese or a side of butter.

Be it in your nearest supermarket or in the bakery around the corner, you’ll find plenty of varieties, including reikäleipä, a big round bread with a hole in the middle, or jälkiuunileipä, a hard bread baked at a low temperature. There are also a couple of dry versions, called näkkileipä and hapankorppu, the latter known as Finn Crisps abroad. Rye bread is a good choice for those looking for a healthy option as it’s made from sourdough and is high in fiber. 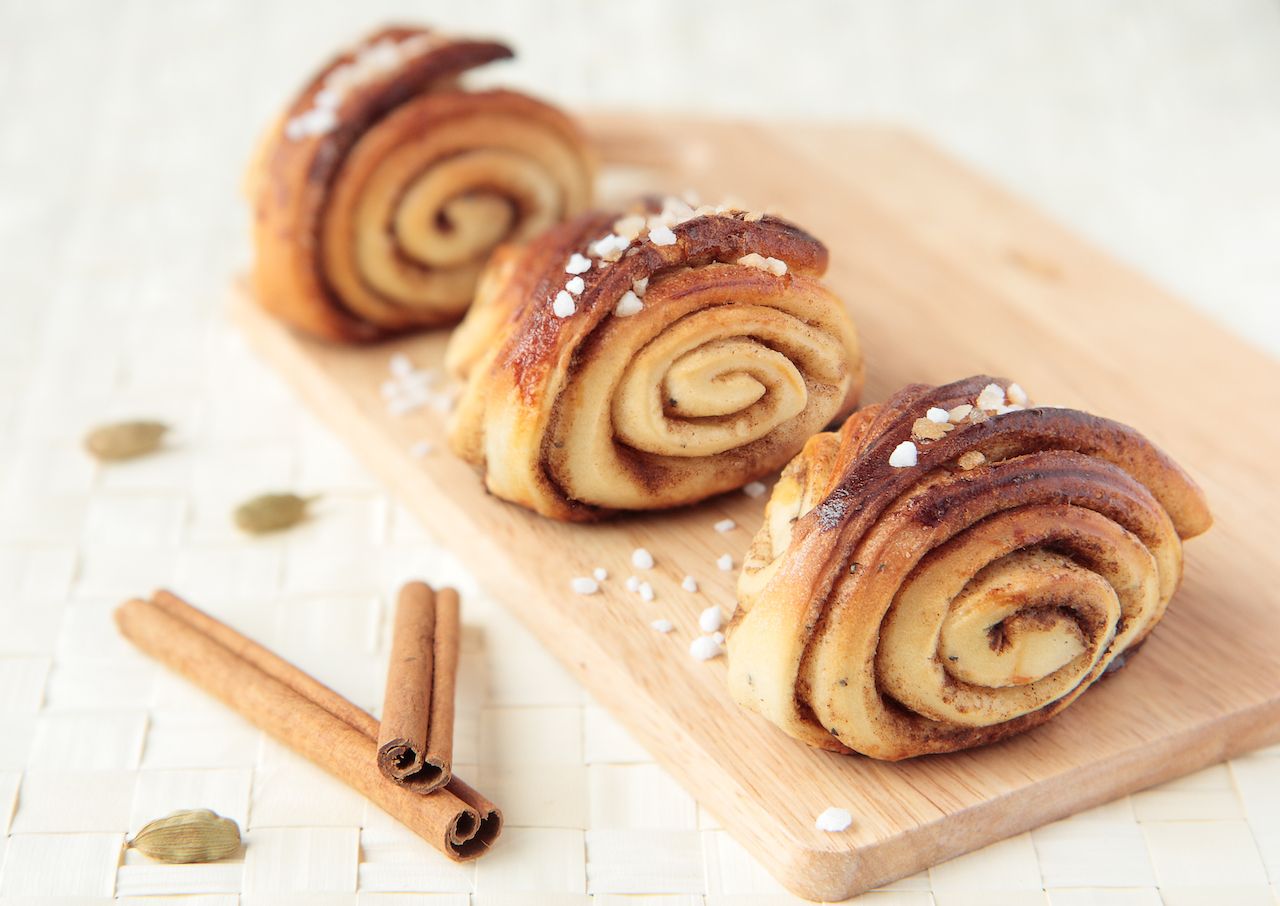 Scandinavian flavors can be sampled all around the world these days thanks to IKEA. If you’ve ever paid a visit to the food court in one of the furniture giant’s stores, you’ve probably come across the kanelbulle, a sweet roll filled with sugar, cinnamon, and cardamom. The Finnish version of this treat has a curious name, korvapuusti, which means “a slap on the ear.” No one knows for sure how this pastry got its name, but perhaps one reason is that the shape resembles a pair of ears. The cinnamon buns are best eaten fresh out of the oven, with a cup of coffee or a glass of cold milk on the side. 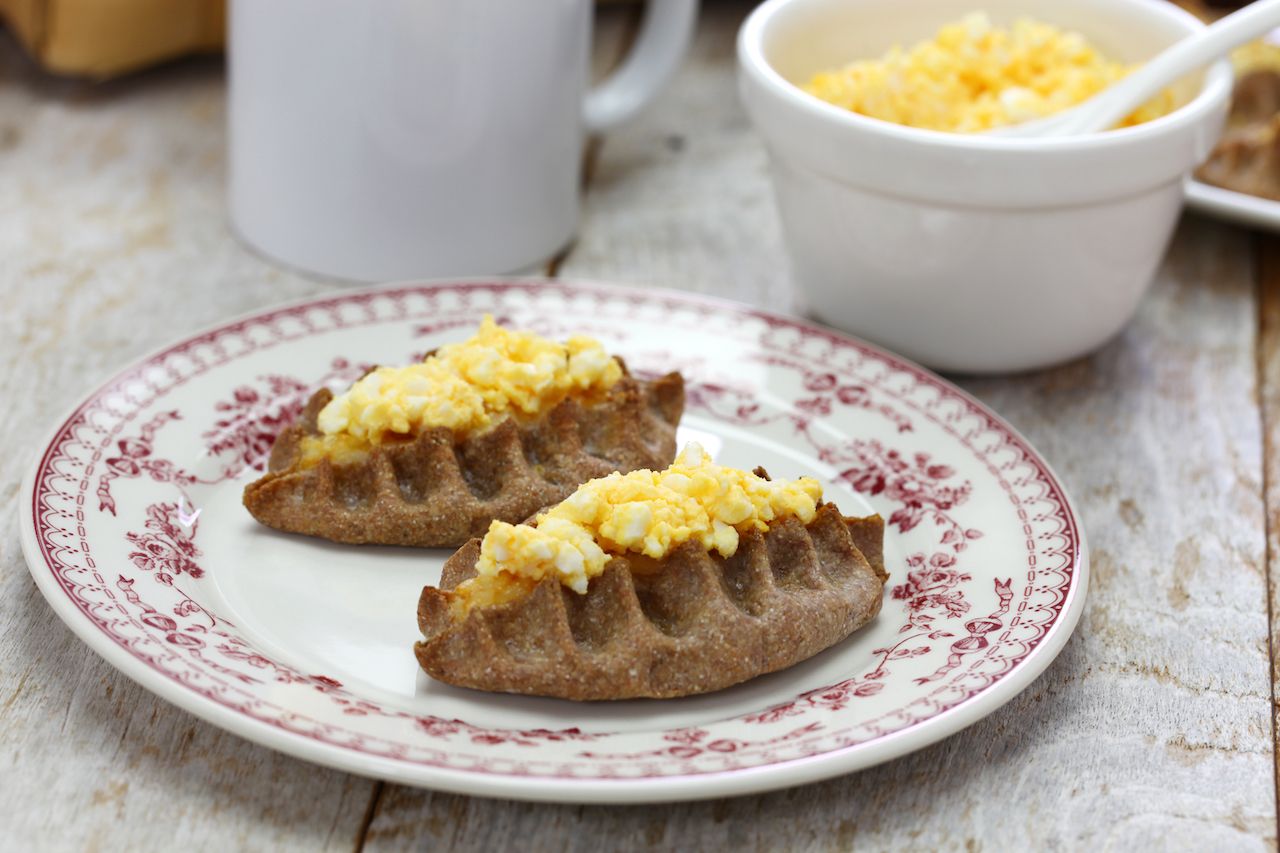 Originally from the Karelia region in the eastern part of Finland, which is now part of Russia, this rye crust pastry filled with thick rice porridge has become a popular snack throughout the country. The most common way to eat karjalanpiirakka is with munavoi, a spread made out of chopped hard-boiled eggs and butter. An easy and affordable way to sample this local treat is to head to the bakery section in any supermarket and buy one that has been preheated. In addition to the rice porridge filling, you can also find pies filled with shredded carrots and rice, as well as potato mash. 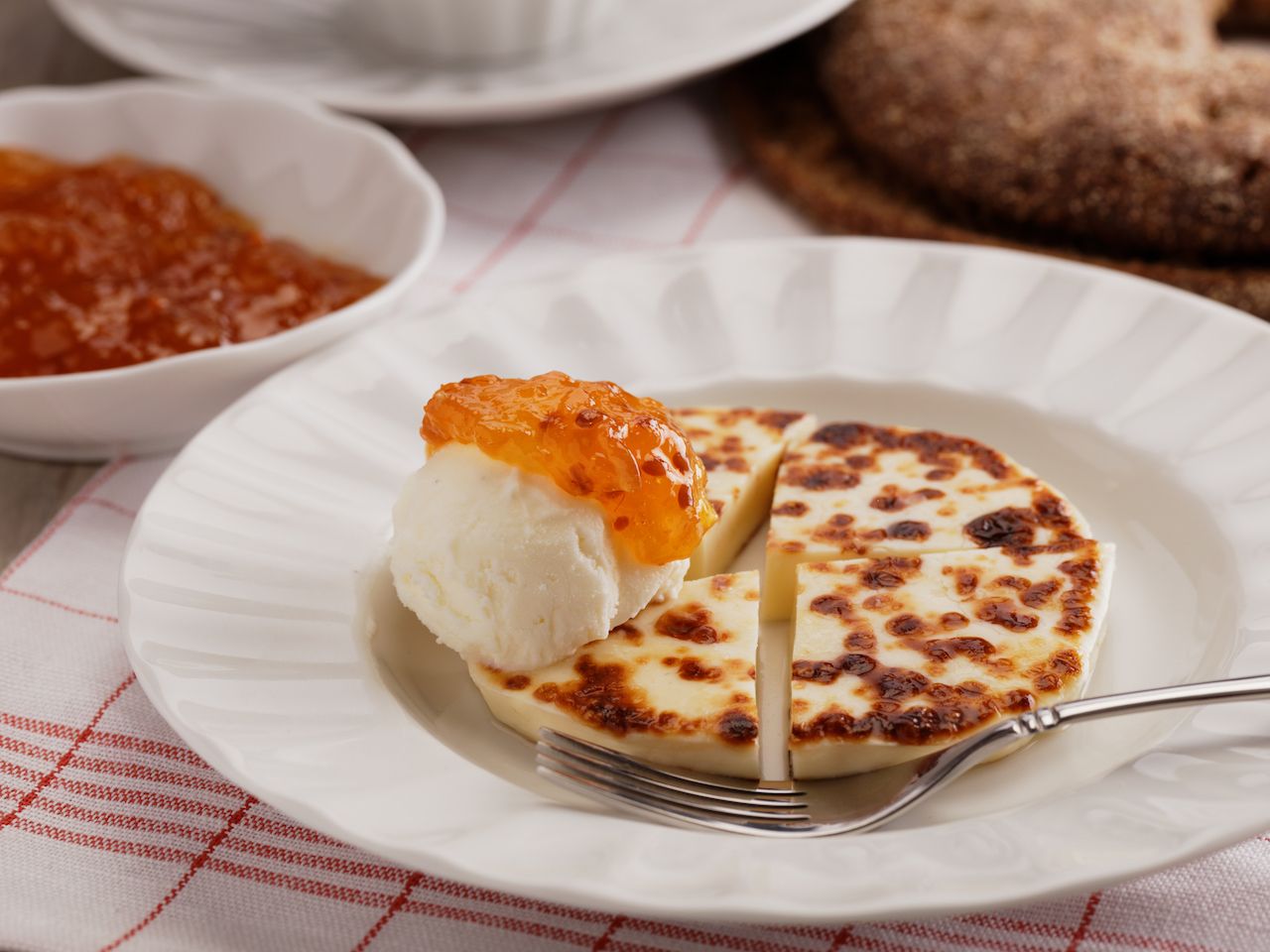 This baked, slightly sweet cheese is a regional speciality that has become a popular dish all over the country. The cheese makes a squeaky sound when you bite into it, which explains why some Finns, especially kids, refer to it as the “squeaky cheese.” Particularly popular in the northern parts of Finland, it’s best enjoyed hot with some cloudberry jam spread on top. Bright-orange cloudberries are native to Scandinavia and can only be found growing in high altitude bogs. The taste is a mixture of sweet, sour, and tart notes, which compliments the fattiness of the cheese perfectly. Although less common, leipäjuusto can also be used in salads or even Indian dishes instead of paneer cheese. 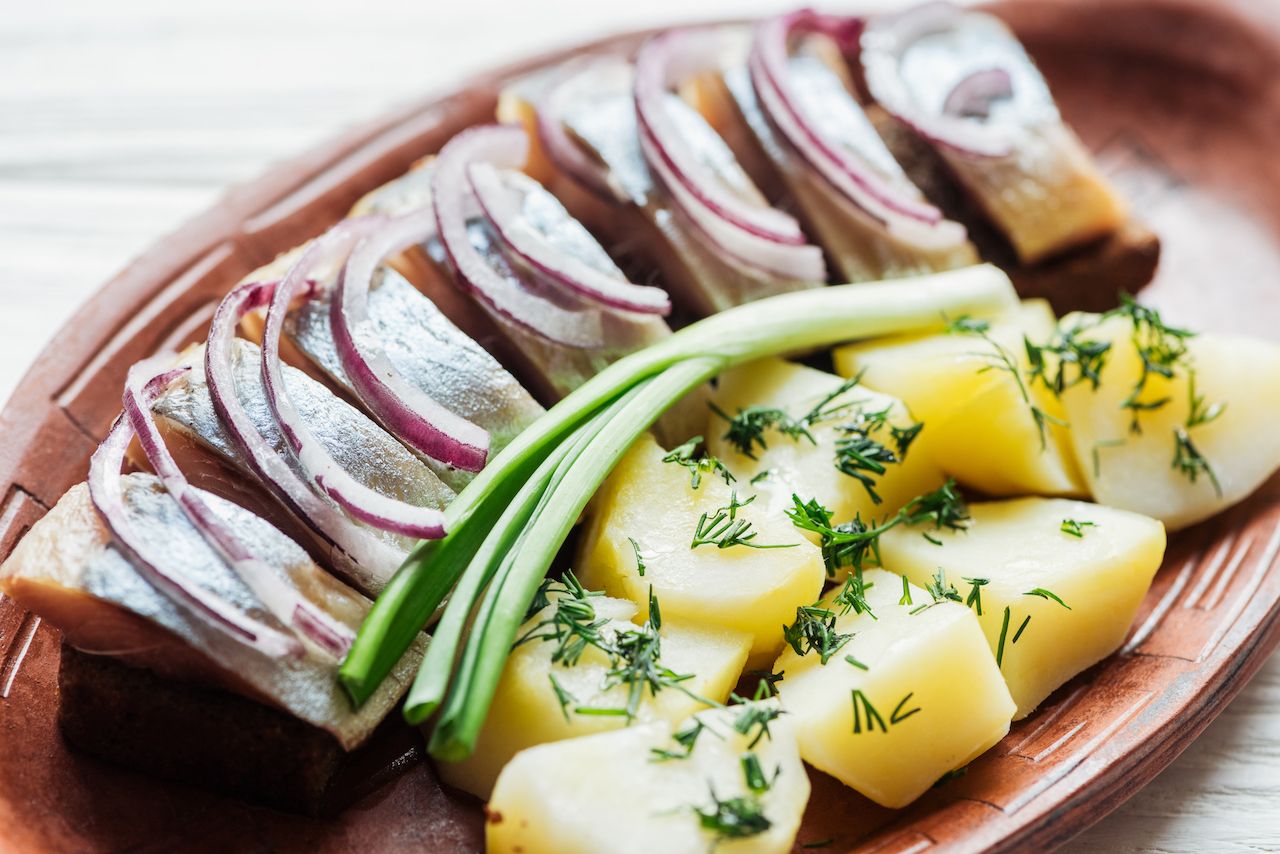 If you ask a Finn what their favorite season is, their answer will likely be summer. The months of June, July, and August don’t just mean warmer and longer days but an abundance of local ingredients, some of which are only available for a short period of time. One of the most awaited crops is the spring potatoes. Compared to your usual spuds, these are considerably smaller in size, have a beautiful dense texture, and a slightly sweet taste. Although Finns eat potatoes throughout the year, in summer they’re served as a main instead of the usual side dish. A typical summer meal consists of boiled spring potatoes, dill, butter, and pickled herring. 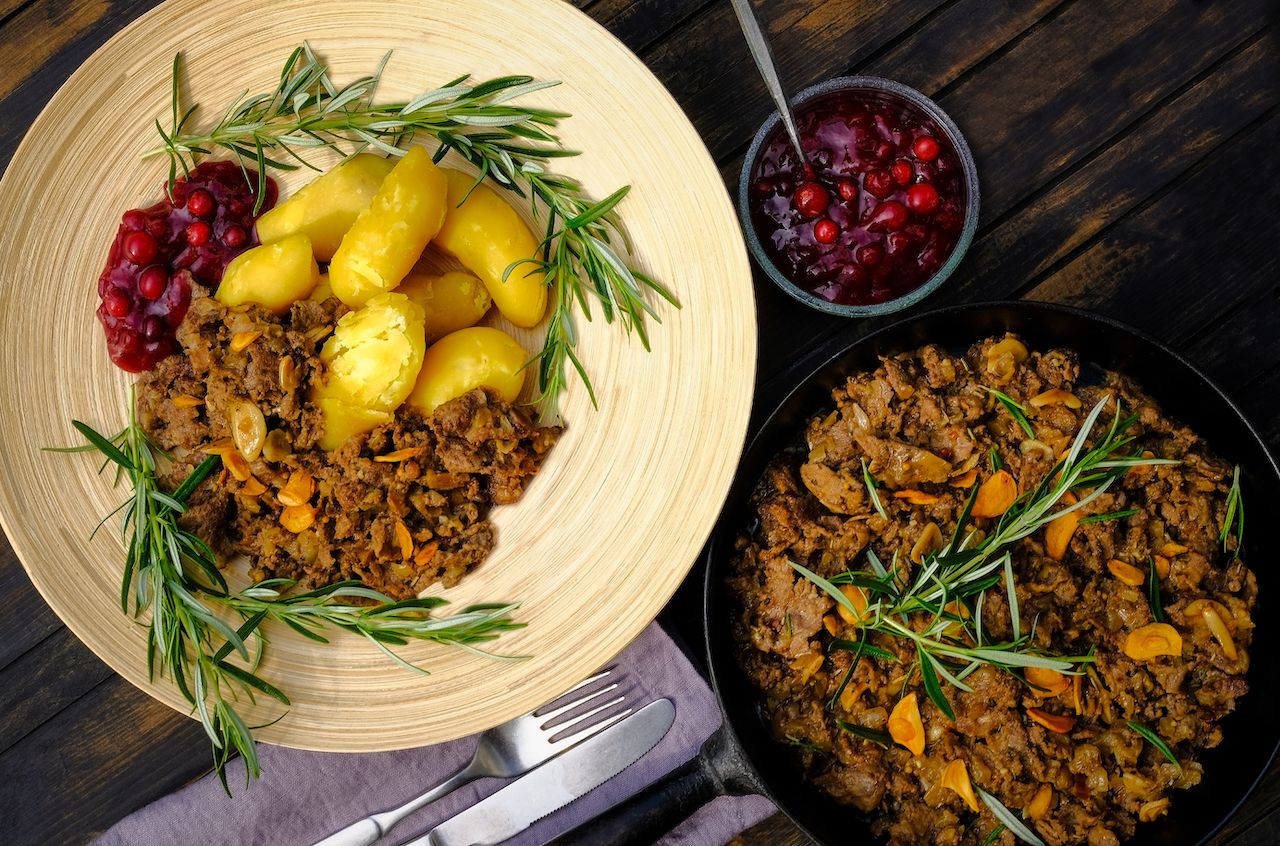 Outside of the Nordic countries, reindeer are known as Santa’s little helpers. In Finland, reindeer are a common source of protein. Reindeer tastes great, and it’s sustainable, too. The animals roam free in the forests of northern Finland and graze on the local vegetation. Like all game meat, reindeer has a strong flavor and low fat content. The most common way is to eat it sautéed with a side of mashed potatoes and lingonberries. 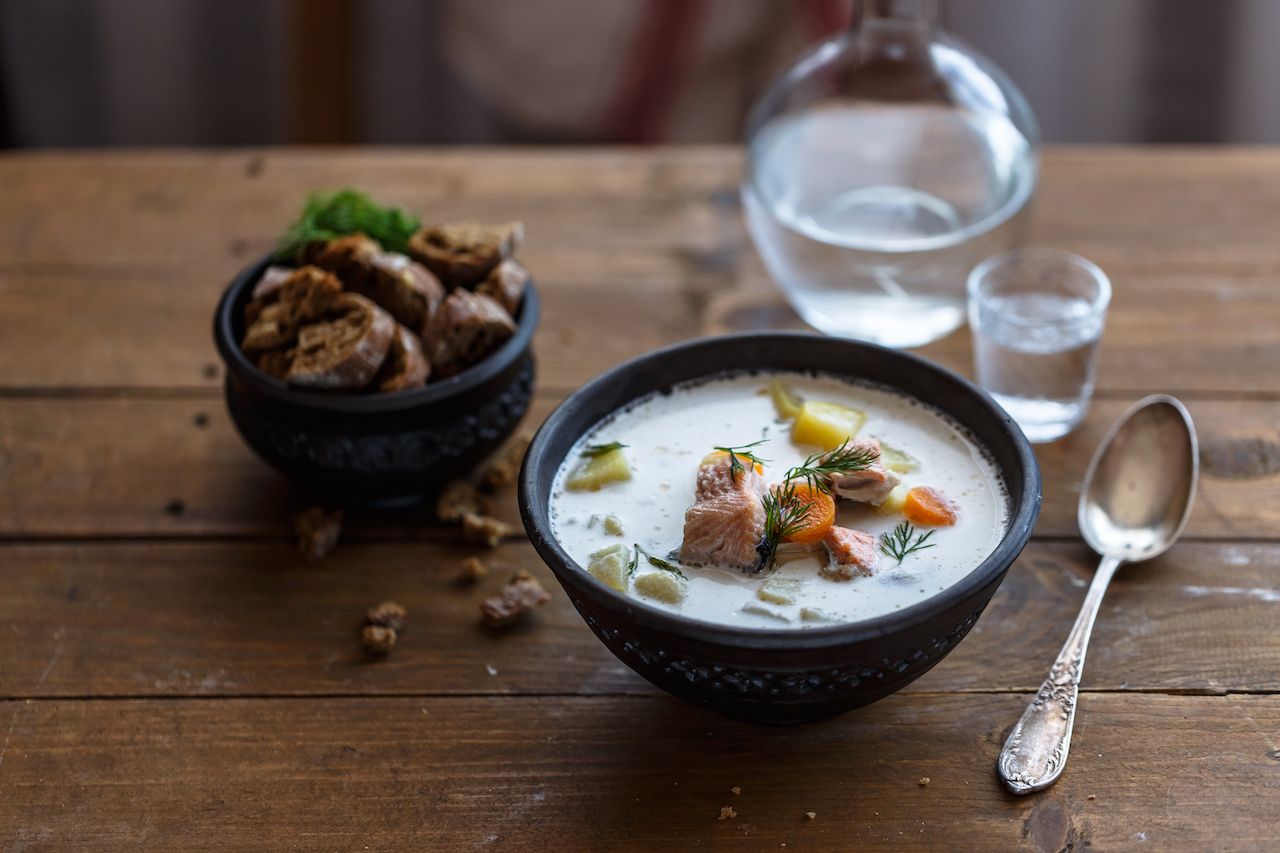 The Finnish diet is rich in fish, and the most popular fish by far is salmon. A truly Finnish way to enjoy it is to have a bowl of piping hot salmon soup with a side of rye bread. This simple soup can be made with either a clear or milky broth, and on special occasions, fresh cream is added to give the dish a more sumptuous flavor. In addition to salmon, the soup also usually contains potatoes, carrots, and leeks. Dill is sometimes added as a garnish, especially in the summertime. 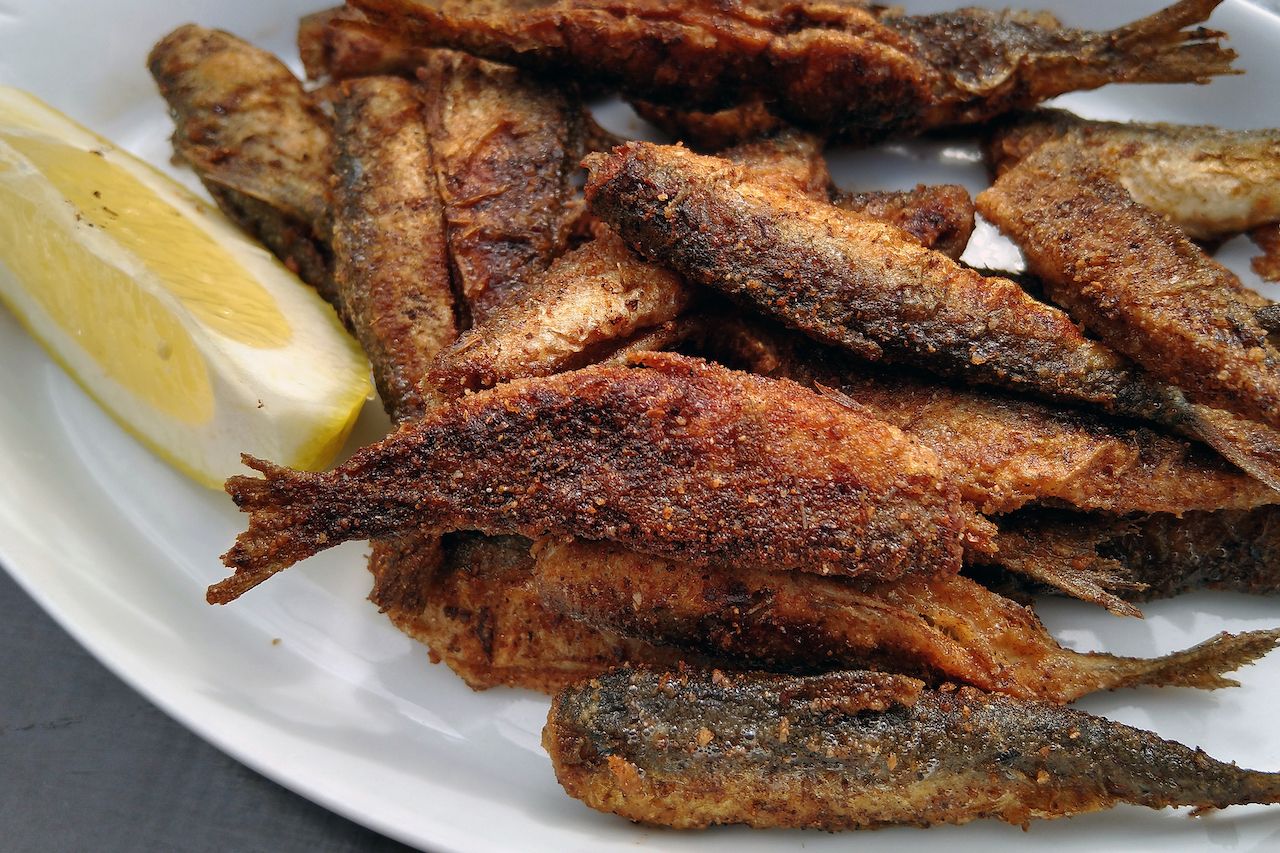 If you’re a fan of fish and chips, don’t miss out on fried vendace (freshwater whitefish), which is served on its own or with mashed potatoes. Often sourced from one of the thousands of lakes in Finland, vendace makes up in flavor what it lacks in size. The recipe is simple: The fish is gutted, covered in a mixture of rye and plain flour, and fried in a generous amount of butter. The best, and the only, right way to eat vendace is to buy a fresh portion at a market. And don’t be surprised if a Finn takes a photo of you and asks you to say muikku — it’s the local way of saying cheese! 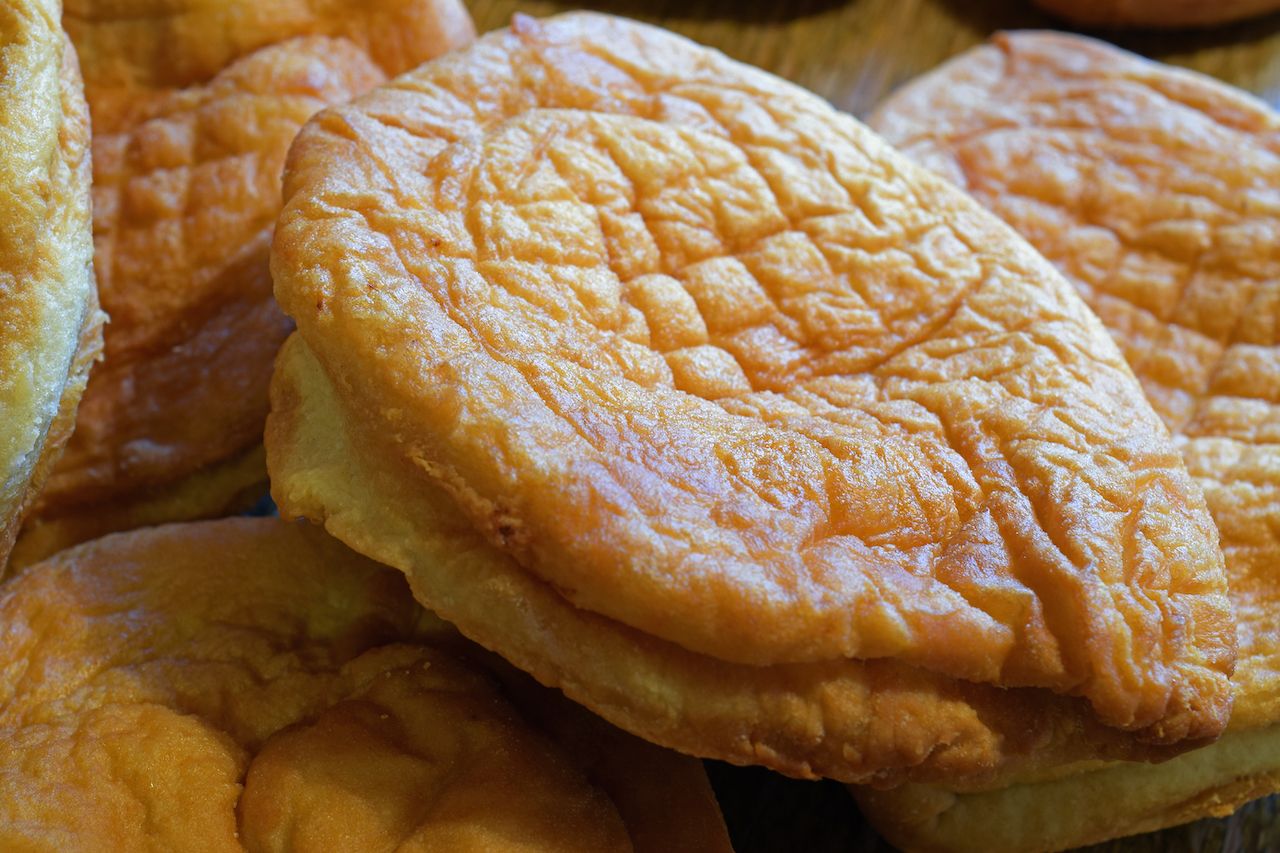 This hearty pastry is another food market favorite that’s influenced by eastern culinary traditions. Made from a dough similar to that of a doughnut, the pastry is filled with cooked rice and minced beef and then fried in oil. The greasiness and saltiness also make it a go-to snack for party-goers returning home after a night out. Find lihapiirakka at one of the many late-night grill joints found all over the country. Try one filled with sausage, fried egg, and pickles, and you have yourself a full meal. Vegans aren’t left out: There is a non-meat version called vihis.

The 5 most beautiful towns in Finland tourists miss
Tagged
Food + Drink Finland
What did you think of this story?
Meh
Good
Awesome

Why You See so Many Babies In Denmark Sleeping Outside and Alone in Strollers
The 20 Happiest Countries in the World, 2022
Finland Just Equalized Family Leave, With 7 Months for Each Parent