As the country’s culture itself, Greek cuisine is an amalgam of Eastern and Western influences with a prominent Mediterranean character. It’s famous the world over for its impeccable taste, ingenious simplicity, and use of fresh seasonal ingredients and herbs. Eating is much more than a daily routine in Greece, it’s a cultural experience that takes the form of a ritual. And if you really want to delve into local culture, the first thing you need to do is try some of the most renowned traditional Greek dishes. 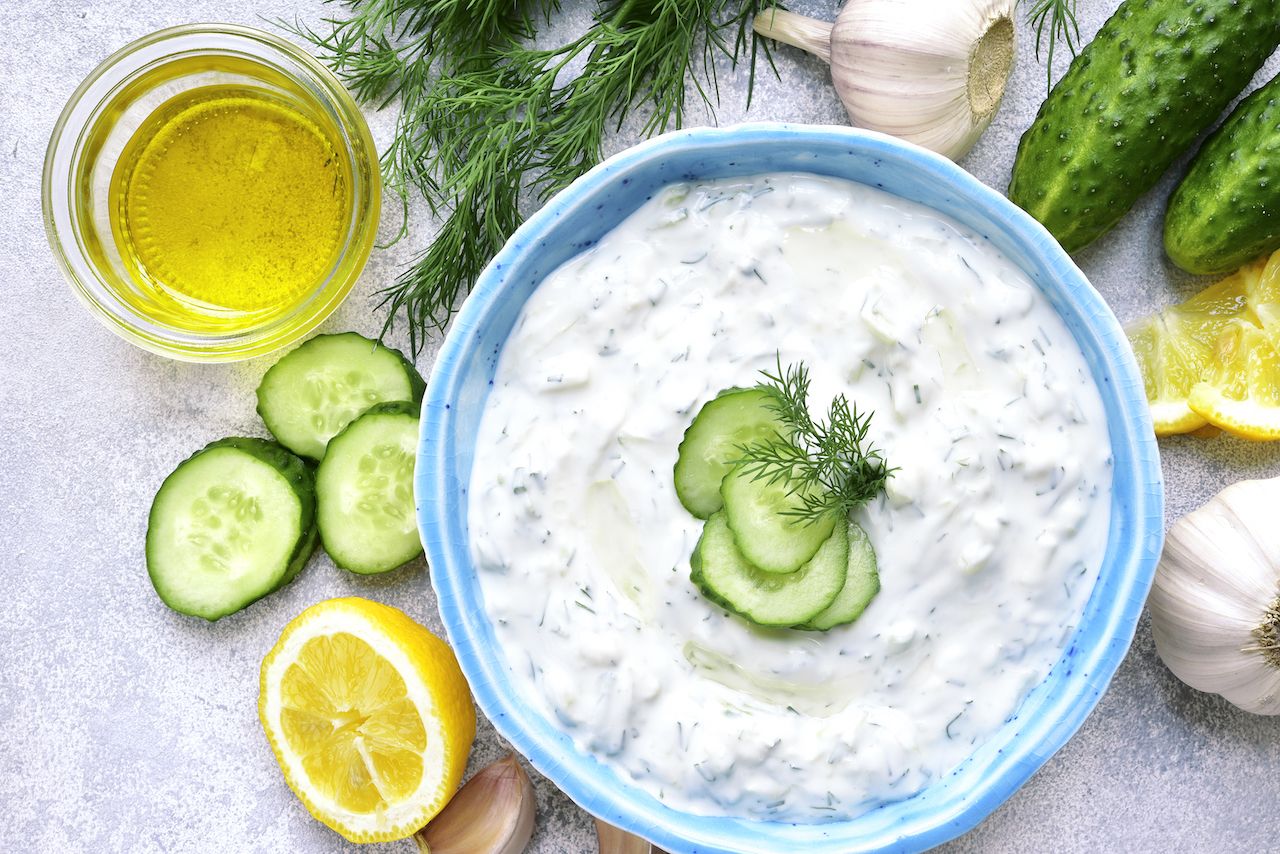 No traditional Greek meal is complete without a platter of this world-famous dip. It’s both easy to make and utterly delicious. It’s made with Greek yogurt, cucumber, garlic, vinegar, and dill, and traditionally served with olive oil and a mandatory single olive on top. You’ll find that tzatziki can accompany any kind of meat, vegetable, or seafood, but it’s especially enjoyable with gyros and souvlaki. 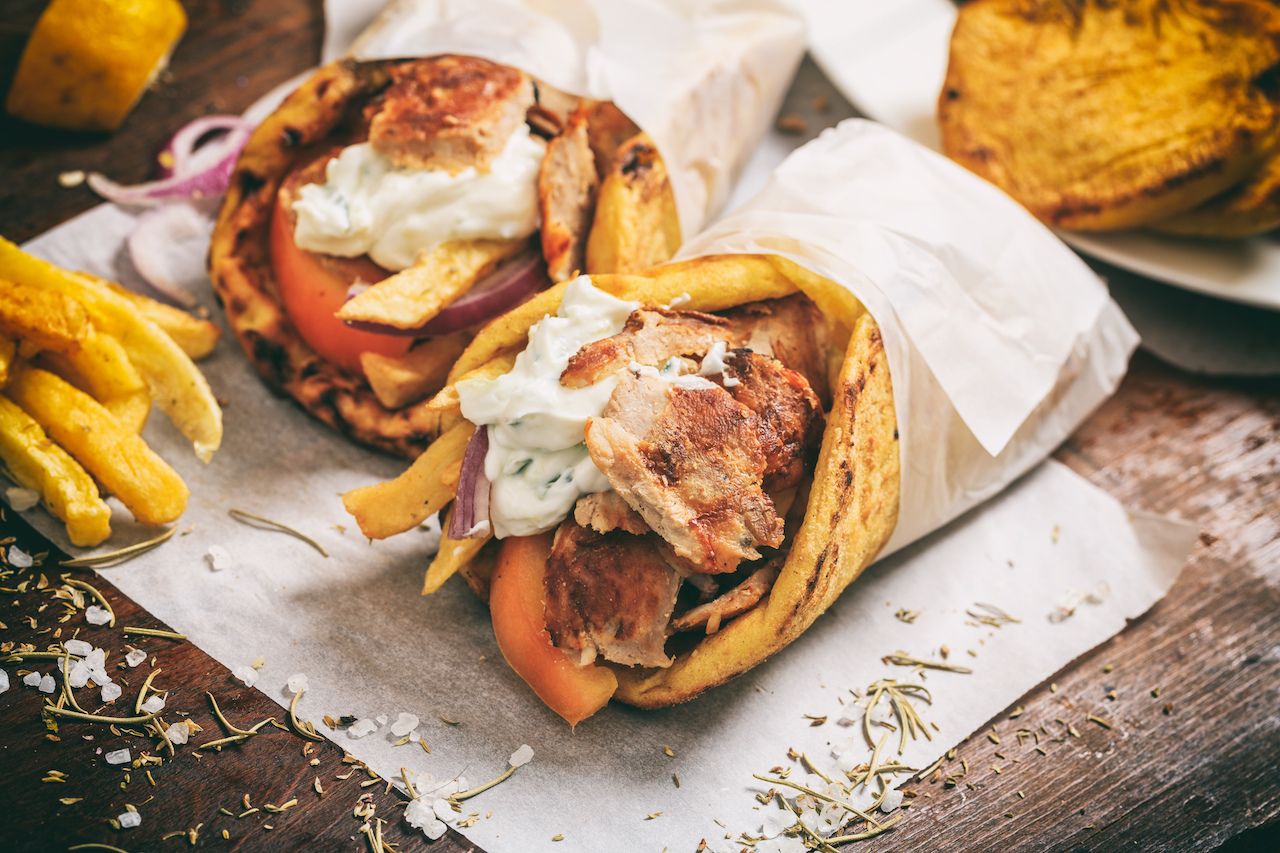 Even if you haven’t visited Greece, you’ve probably had the chance to try some gyros (pronounced YEE-ros). Still, tasting the real thing in its home country is a culinary experience that will have you asking for more. Gyros are thinly sliced pork or chicken meat that’s skewed on a spit and grilled on the trademark vertical rotisserie. They’re wrapped up in pita bread or served as the main course on a platter with tzatziki, onions, tomato, and French fries. 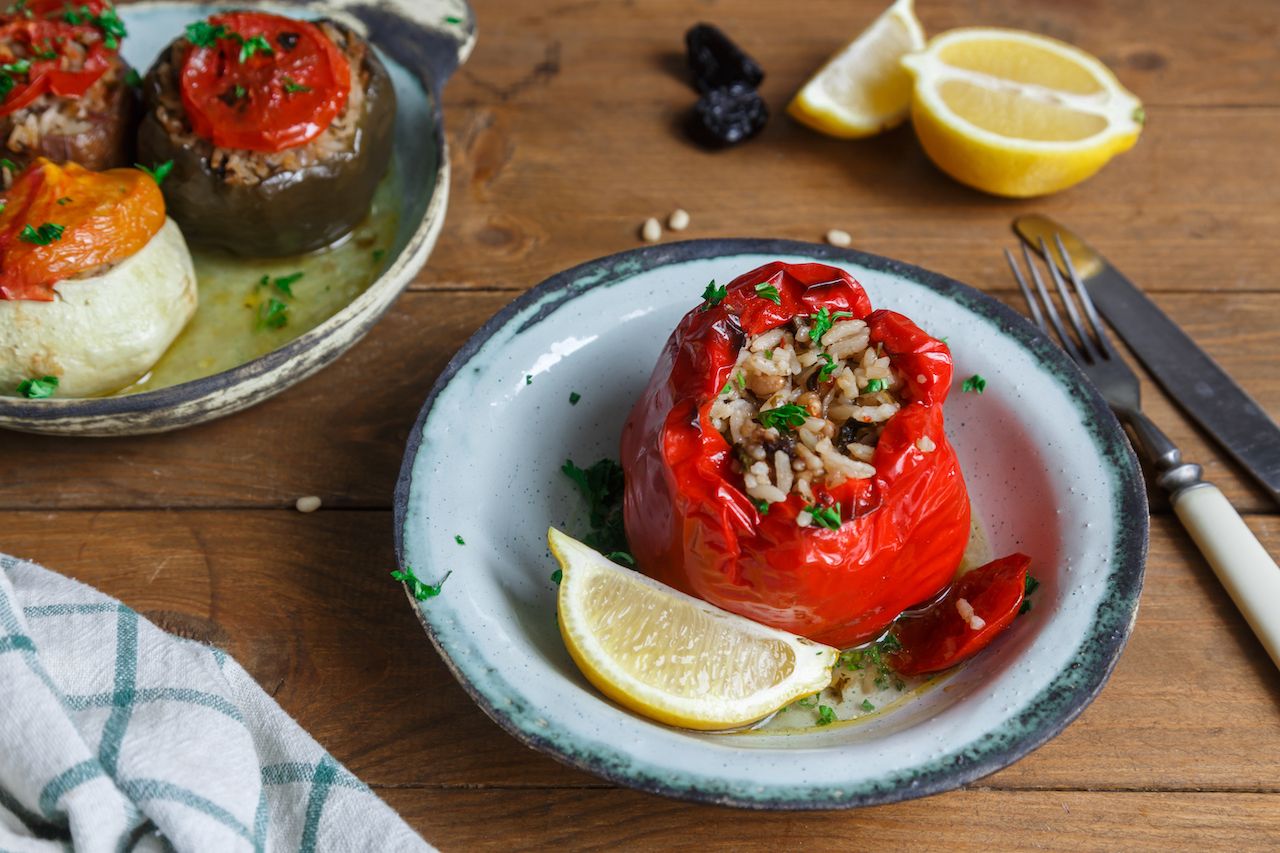 A traditional summertime dish, yemista is popular across every region of Greece due to its simplicity and fresh taste. The name translates to “stuffed” and refers to the tomatoes and green bell peppers that are filled with rice, onions, parsley, and mint. Yemista are usually accompanied by baked potatoes and feta cheese or Greek yogurt. 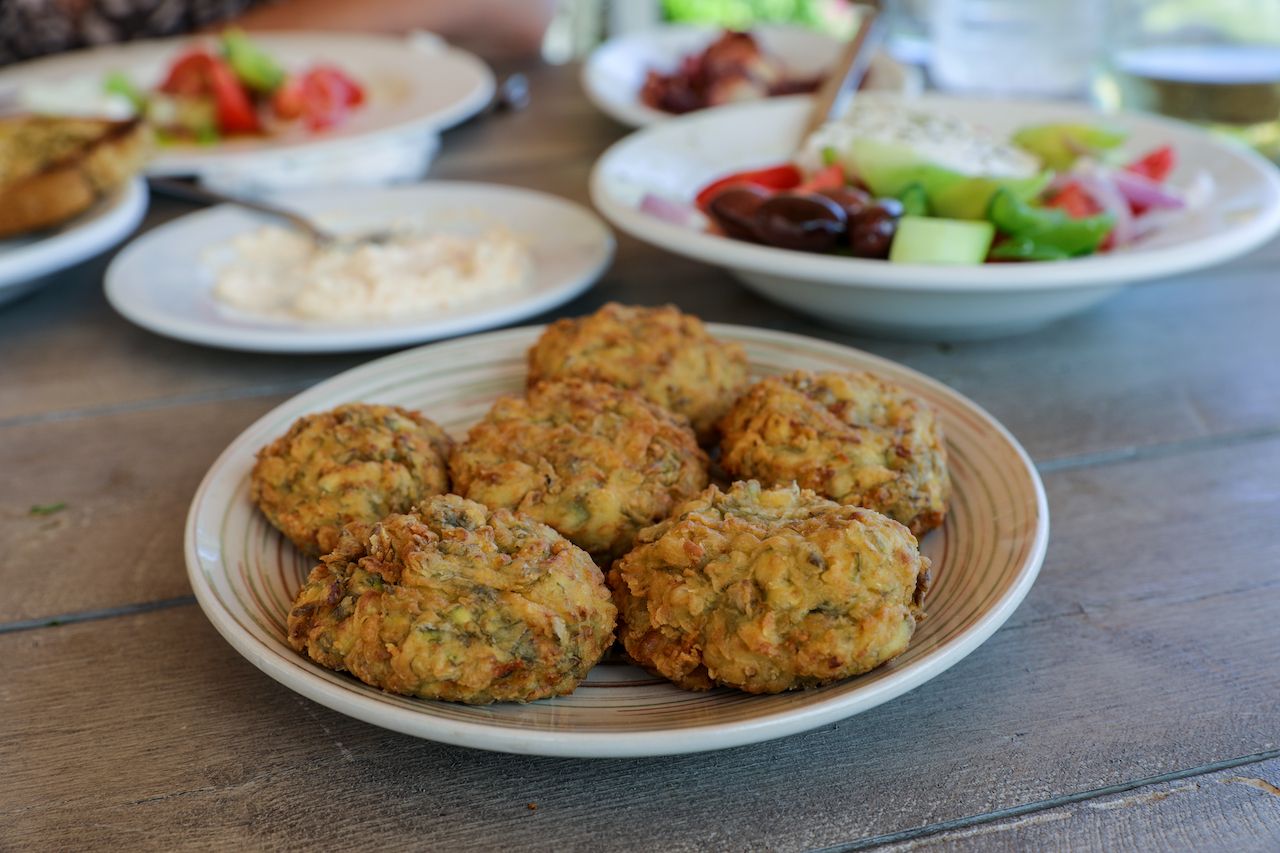 A platter of zucchini balls is the most typical dish you will see flying around on a waiter’s tray in traditional Greek taverns. The recipe is quite simple. Grated zucchini is blended with cheese, herbs, and spices; covered in a mix of flour, egg, and ground pepper; and then deep-fried to create mouthwatering, crunchy fritters. 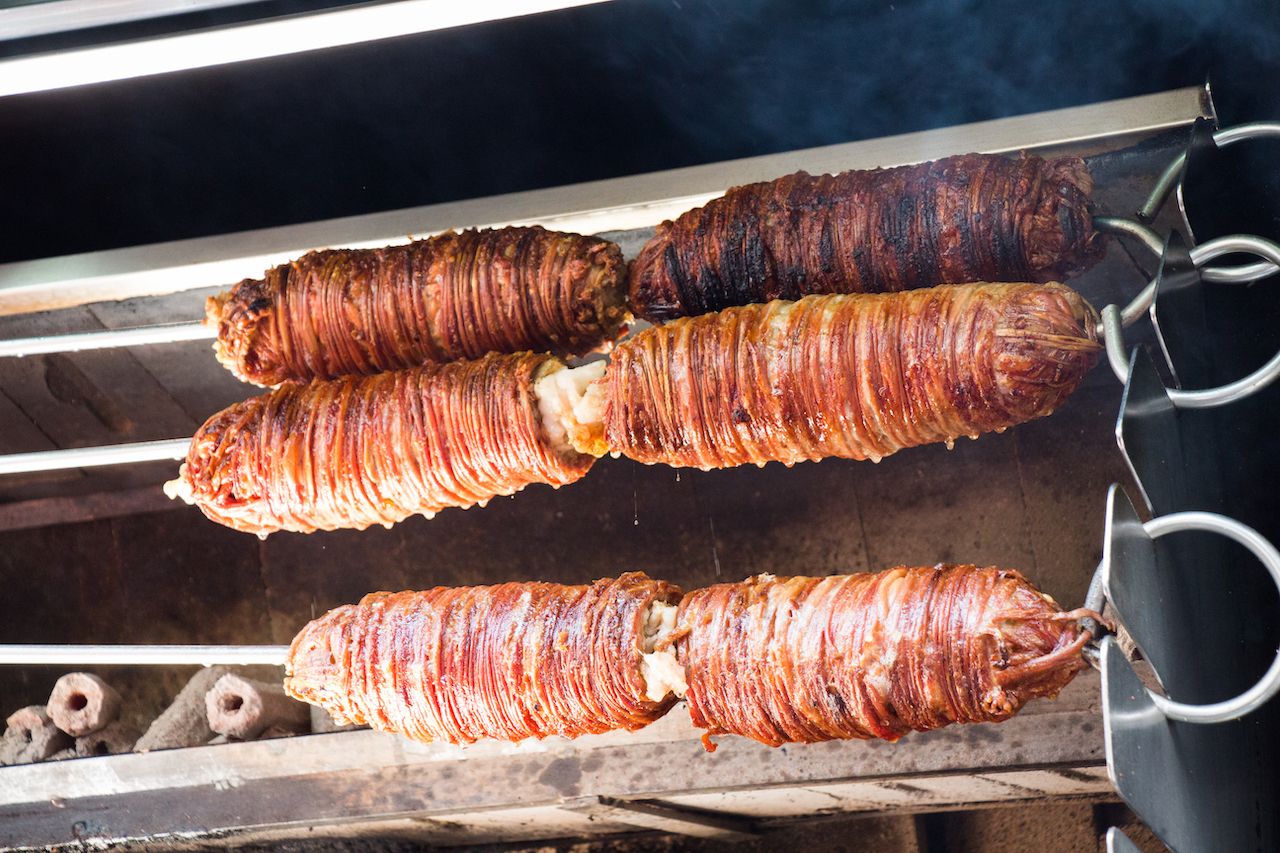 For the hardcore meat lovers out there, kokoretsi is a dish that’s primarily (but not exclusively) enjoyed on Easter. It consists of the internal organs of lamb wrapped in heavily seasoned lace fat and intestines that are slowly cooked on a skewer for several hours. It’s not a dish you’ll find in touristy places in Greece, yet it’s one you absolutely have to try to get a real taste of authentic Greek cuisine. 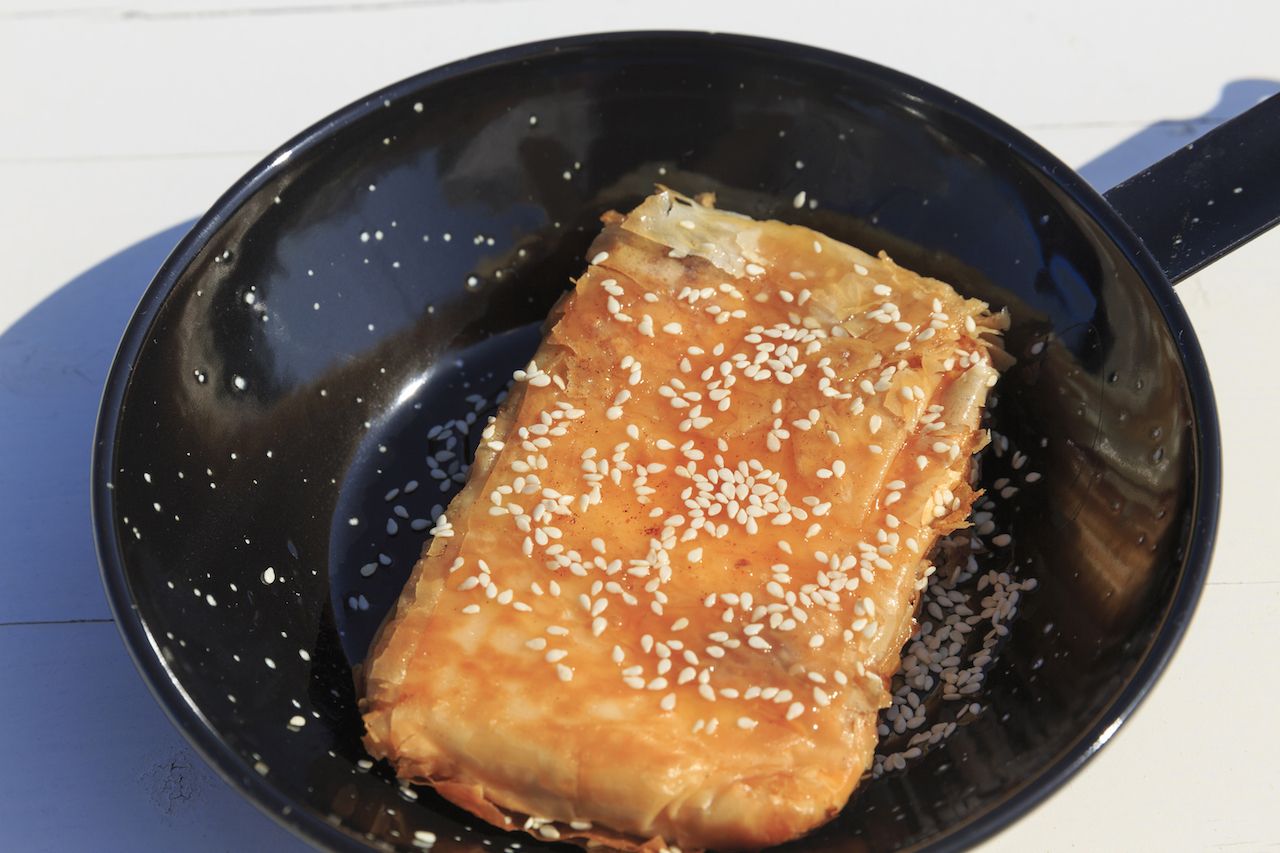 Feta cheese is Greece’s most famous cheese, but not enough visitors know that there’s more than one way to taste it. Feta with honey is both an appetizer and a dessert, sweet and salty at the same time. To make this dish, a slice of feta is wrapped in phyllo dough and then baked in the oven until golden brown. Then, it’s topped with honey and sesame seeds. 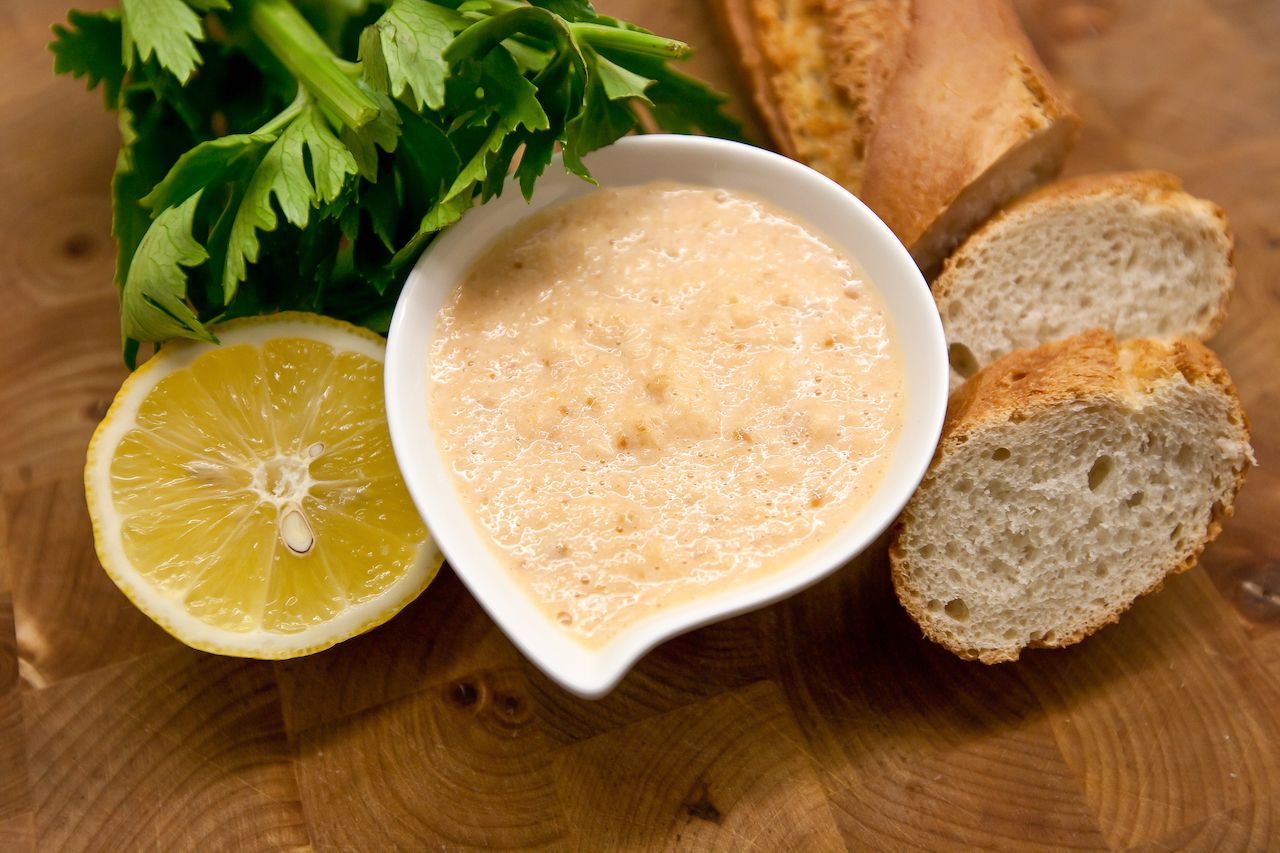 You won’t find anything even remotely resembling a taramosalata anywhere in the world other than Greece. It’s a delicious spread made with fish roe (most often from cod or carp), garlic, lemon juice, dill, and ground pepper, and served with a splash of virgin olive oil. Traditionally, locals savor this dish on the first day of Lent. 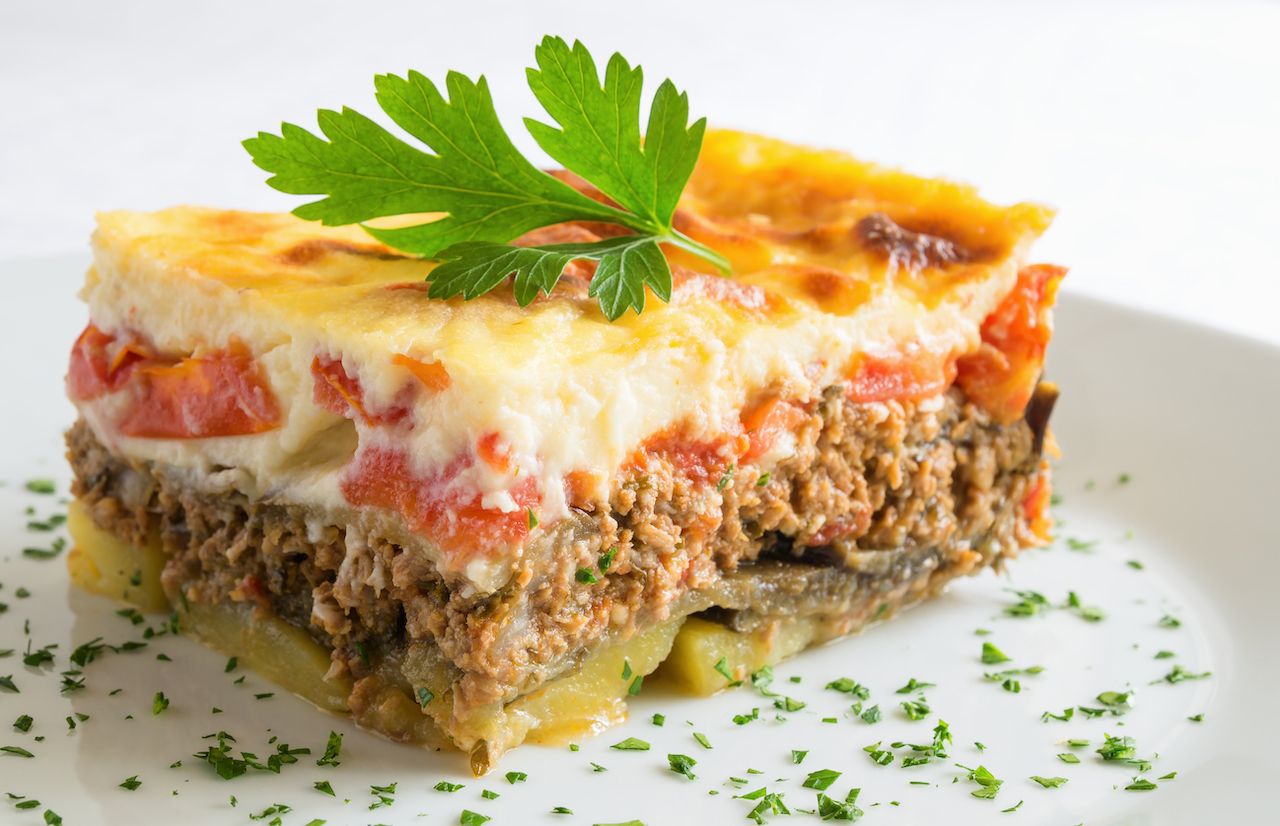 As well as being one of the six national dishes of Greece, moussaka is also probably the most famous one. A traditional moussaka consists of layers of minced meat cooked in tomato sauce, potatoes, sweet eggplants, and crusty béchamel cream on top. There are also some interesting vegetarian variations of the dish that include portobello mushrooms, lentils, and zucchini or other vegetables. 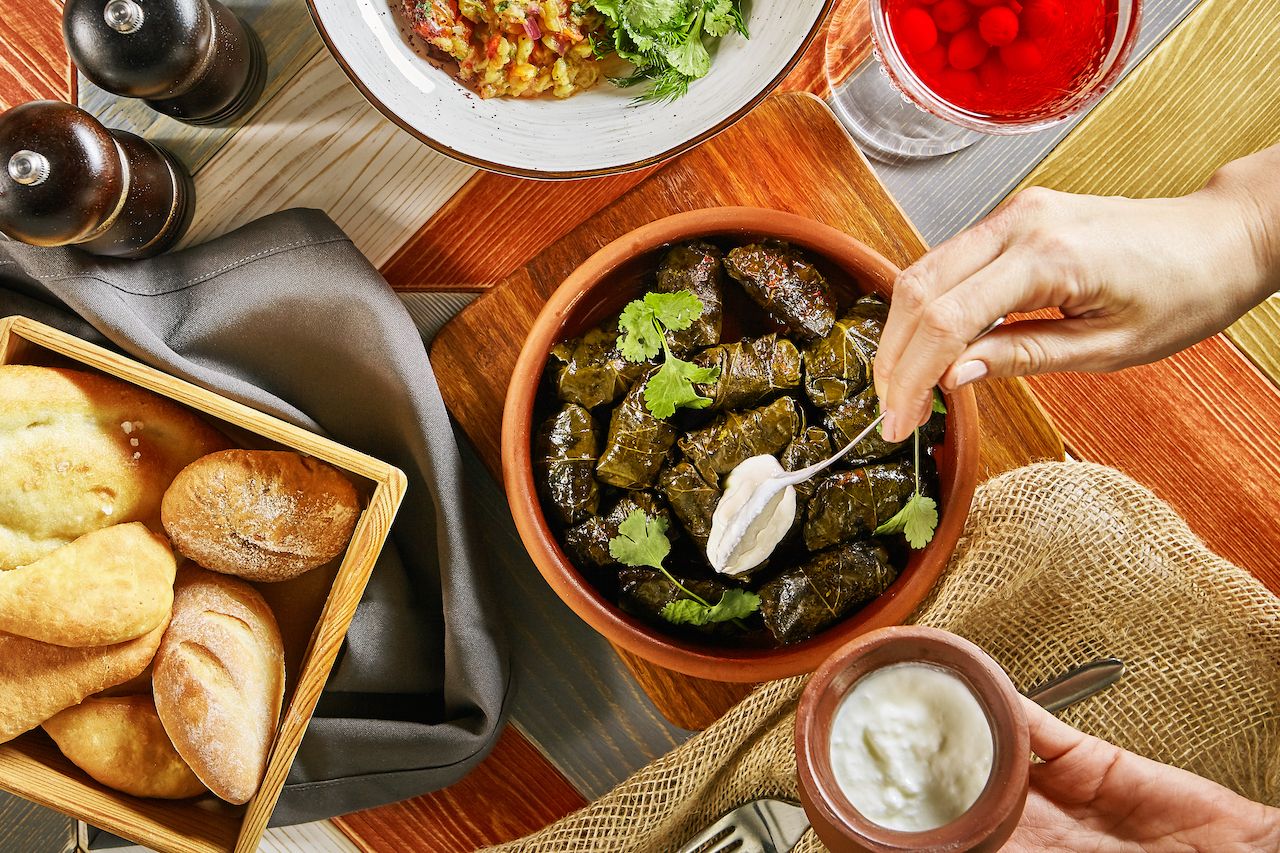 This dish is as traditional as they come. You’ll never meet a Greek grandmother who isn’t especially proud of her recipe for dolmadakia. Dolmadakia are oven-cooked vine leaves stuffed with long grain rice, minced beef, and herbs like oregano, thyme, parsley, and dill. They’re served in fresh lemon juice and olive oil and make for an exquisite appetizer. 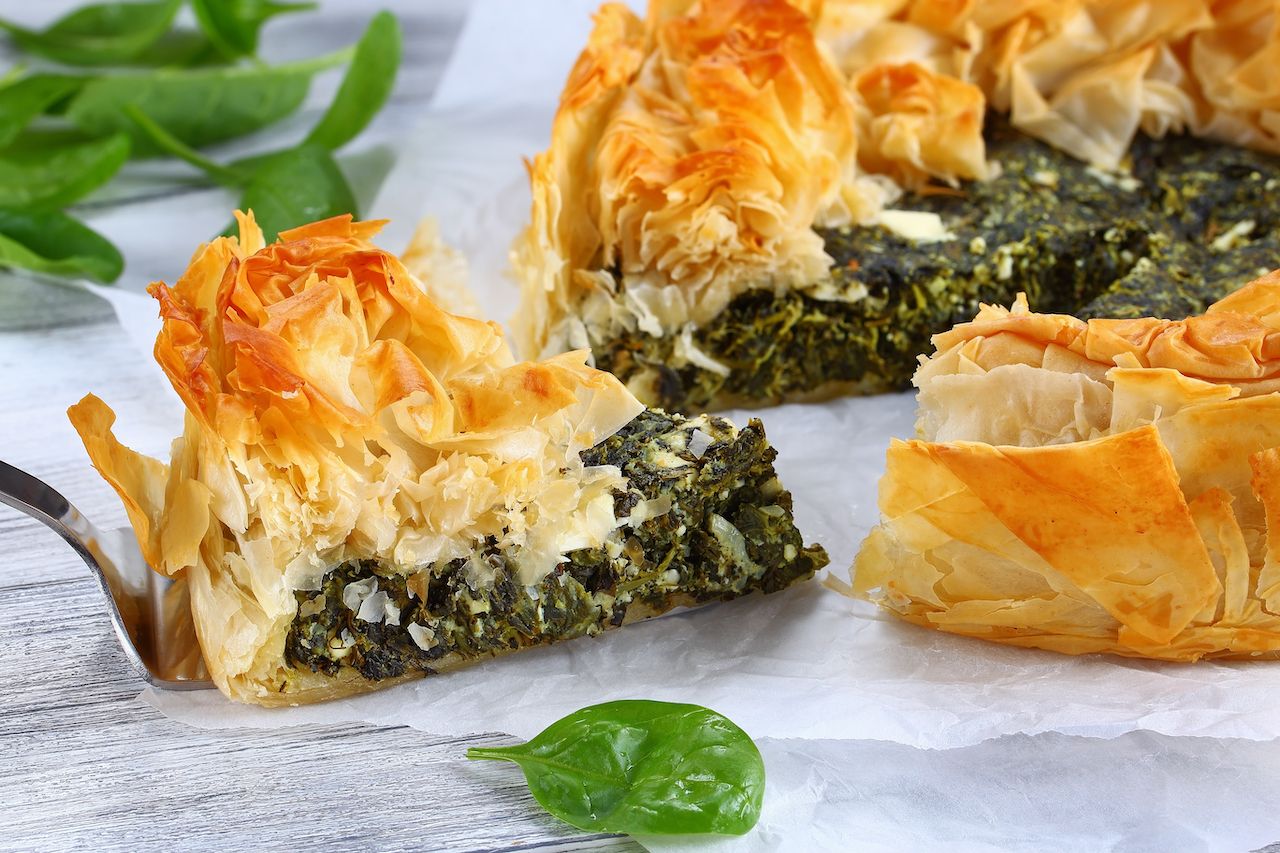 Essentially spinach pie, spanakopita is probably Greek cuisine’s most versatile dish. Greeks can have a slice of spinach pie for breakfast, lunch, or dinner, and enjoy it equally as an appetizer or main course. What makes this pie so special is the extraordinarily thin layers of phyllo dough, which make it crispy on the outside and soft on the inside. Apart from spinach, the filling of the pie also comprises of feta cheese, onions, and various herbs. 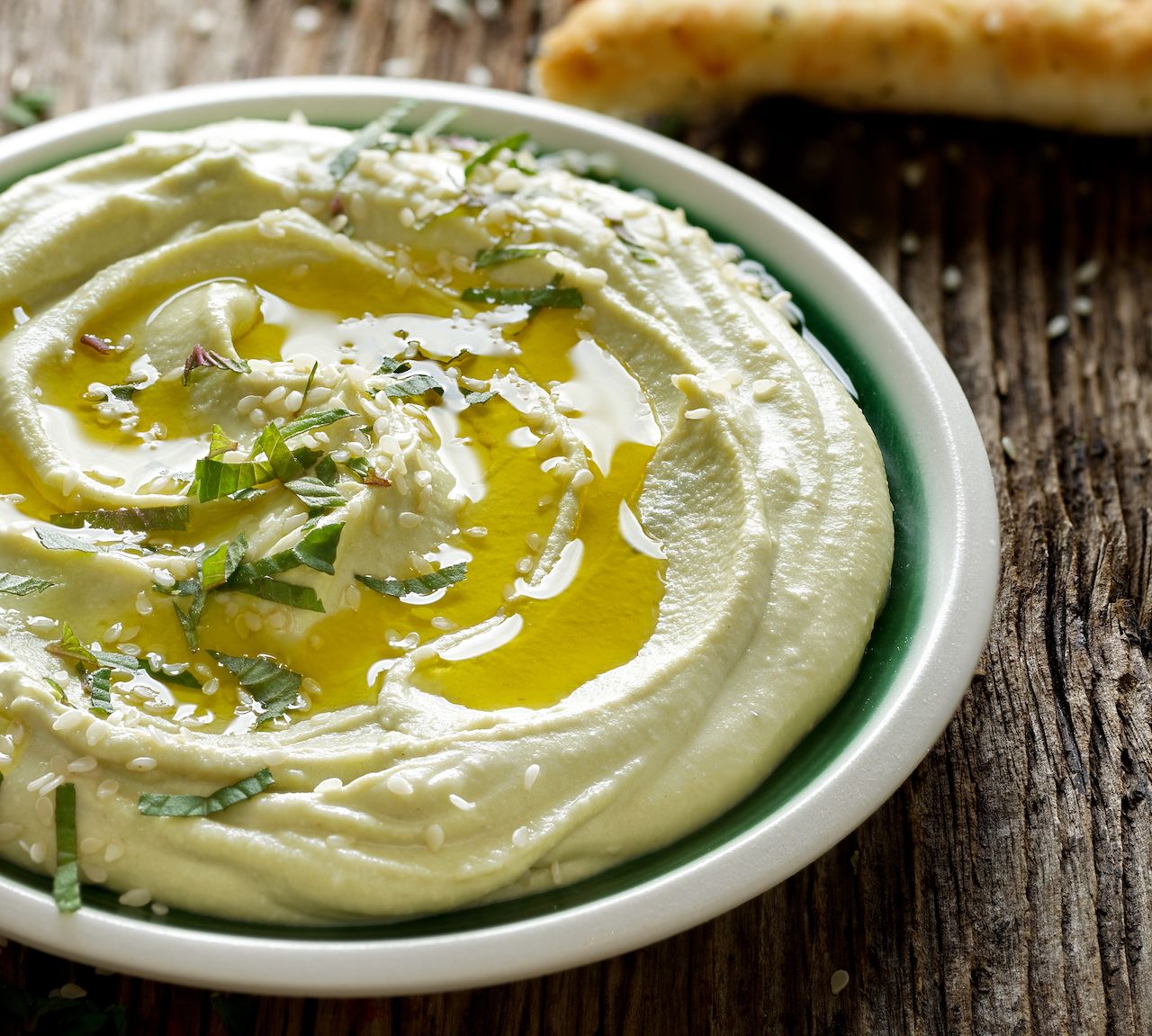 If you’re a vegan traveling to Greece and you’re worried that your options might be limited, you’ll love this one. It looks similar to hummus, but it’s an entirely different dish. It’s made with fava beans, onions, olive oil, garlic, and lemon, and served as an appetizer. Fava is extremely popular on the island of Santorini, but you can find it almost everywhere throughout the country. 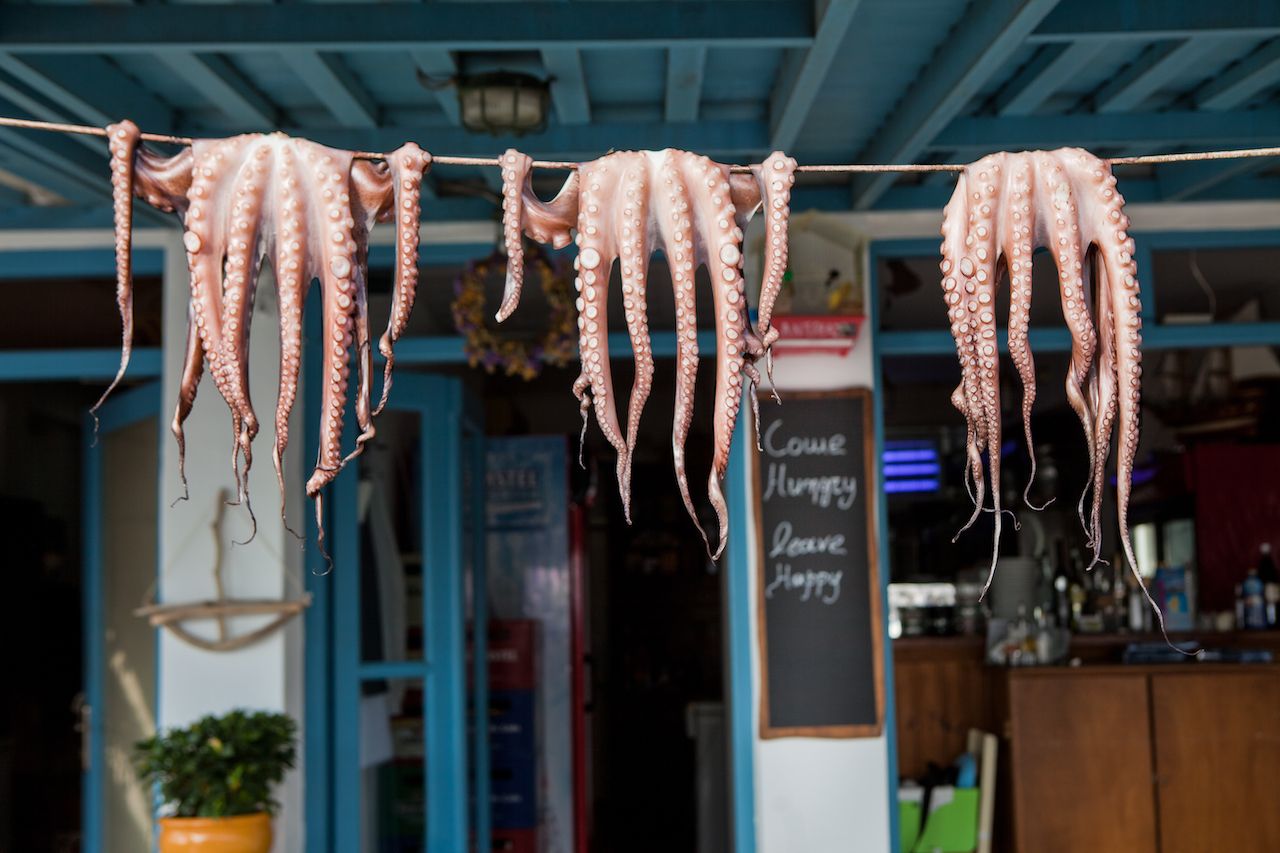 If you’ve ever visited a Greek island or seaside town, you’ve undoubtedly come across what might be a peculiar sight: octopuses hanging on a rope in front of a seafood tavern. It’s the locals favorite summer delicacy. The octopus’ tentacles are seasoned with virgin olive oil, fresh lemon juice or vinegar, and Greek oregano before boiling or grilling. Make sure to try this dish with a glass of ice-cold ouzo.

Beaches and IslandsThe Best Islands You Can Day Trip To From Athens
Tagged
Food + Drink Greece Athens, Greece
What did you think of this story?
Meh
Good
Awesome

This Is the Best Souvlaki in Athens. Try It Before It Disappears.