This adventure was my first solo trip — as well as my first time out of the United States. When I was a child, my parents took me to Pennsylvania once, Florida twice, and Tennessee a couple times. I flew on a commercial airline for the first time when I was 22, to see my (now ex) girlfriend in Boston.

After college, I moved from Granite Quarry, North Carolina to New York City. I worked full time for about two years, but felt like my life was under someone else’s control. I was living with two friends in a one-bedroom apartment in Williamsburg. When that situation came to an end, I sold most of what I owned and told work I was going to travel for a month. (I was technically a freelancer so they didn’t mind.)

I got a passport, booked a one-way flight and planned to see popular destinations in Europe: Iceland, London, Copenhagen, Berlin, Barcelona, Seville. I walked around the cities, saw the sights, and partied with other travelers in hostels. After a month of traveling like this, I felt something was missing from the experience. I wasn’t having any deep interaction with locals and the cultures felt pretty similar to America. I decided to venture down into Morocco.

After a 45-minute ferry from Spain and few nights in Tangier, I went east to the mountain town called Chefchaouen, an area known for its hash production. On top of a hostel at sunset, listening to the call to prayer reverberate off mountain, I met an Austrian with dreadlocks who told me about the overland trip to Senegal he had just taken. I was intrigued. He wrote down the names of a few places to stay on the way, as well as a few places to avoid. I was unsure if I would actually venture that far into Africa, but the idea stuck with me.

On the way south to Marrakech, I stopped in Rabat and Casablanca. I visited the Mauritanian embassy and applied for a visa, which I received the next day. I spent a day searching Casablanca and Rabat for yellow fever vaccinations, speaking in sign language and terrible French, and preparing 20 copies of my travel details, passport and visa. I was advised this would save me from having to get out of the car at the many military checkpoints throughout the Western Sahara.

I took a bus to Agadir, then I hopped a short flight to Dakhla, a little water-side oasis influenced by Mauritanian, Berber, and Moroccan culture, yet a 12- hour drive from anywhere else even lightly populated. In Dakhla, I found a flyer advertising shared taxi rides to Nouakchott, the capital of Mauritania, 800 kilometers away.

At 6 am the next day, I jumped into a car with a few people in flowing Mauritanian robes. Atonal singing came in and out of reception on the radio for hours and hours as we drove down a traffic-less two-lane highway wedged between the ocean and the Sahara Desert. We came upon a military convoy parked in the middle of the highway, with robed soldiers with AK47’s in the backs of trucks. We passed at full speed on the shoulder of the road. 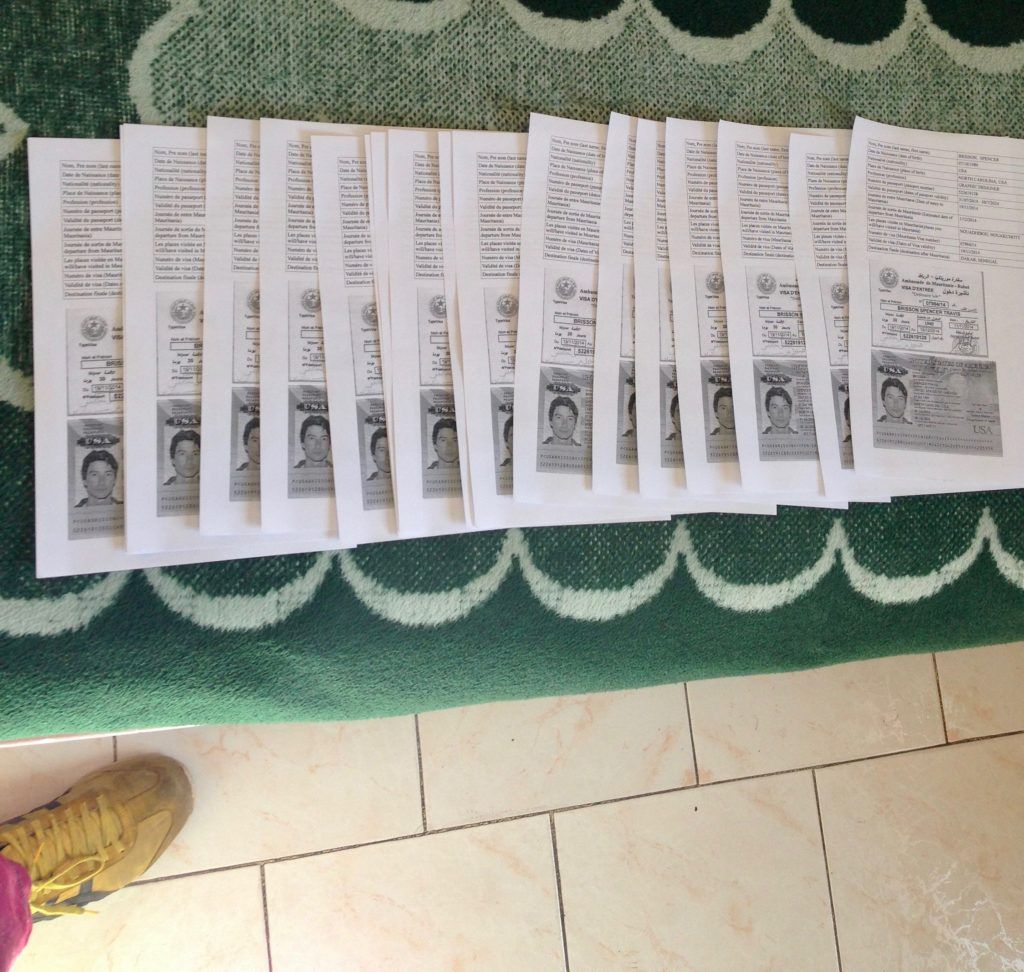 Getting passport copies ready for overland transit through the Western Sahara and Mauritania. 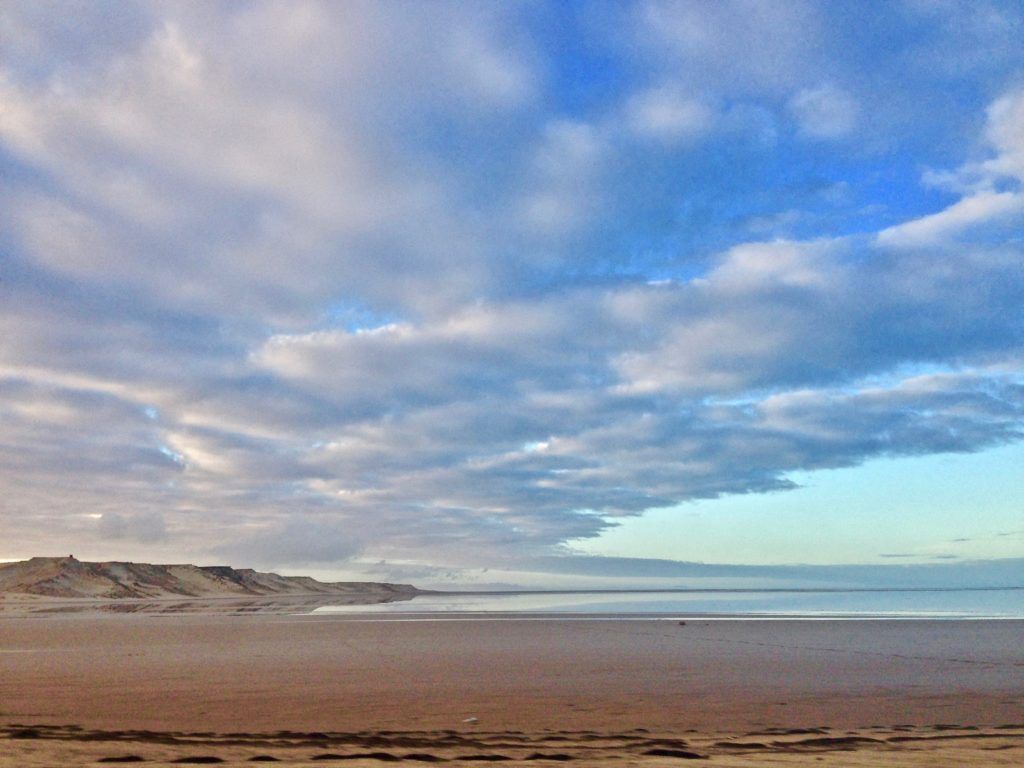 Passing through the Western Sahara territory.

I learned that the Western Sahara is a disputed territory under a 20-year ceasefire. At one time, Mauritania and Mali fought Morocco for it. It’s neither Mauritania nor Morocco, but Moroccan military presence currently controls it. There is a 5-kilometer strip in between the territory and Morocco. The area is land mined and there is no road. It’s all rock and sand. My greatest fear was being somehow refused entry into Mauritania and getting stuck in that 5-km strip forever.

Abandoned cars were cast about in the no-man’s land, completely stripped to the bone. There were piles of old televisions. Figures walked in the distance, one man carrying an old television. A group of Mauritanian men stopped our car. A dark figure leaned over my window and stared at me, smiling. I had no clue what the men were discussing with our driver, but they soon let us go. 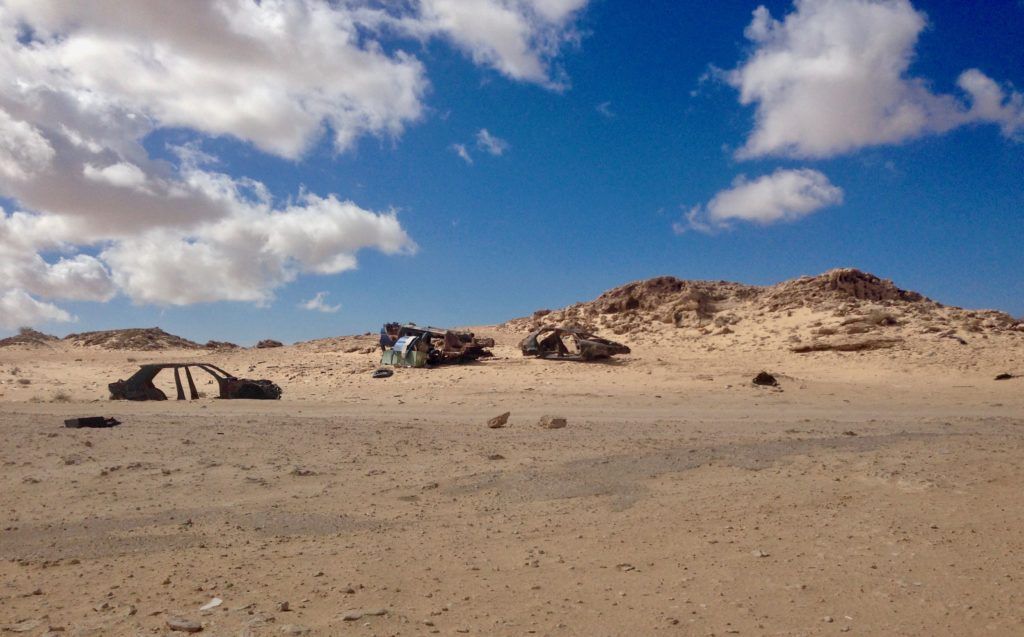 More of the Western Sahara 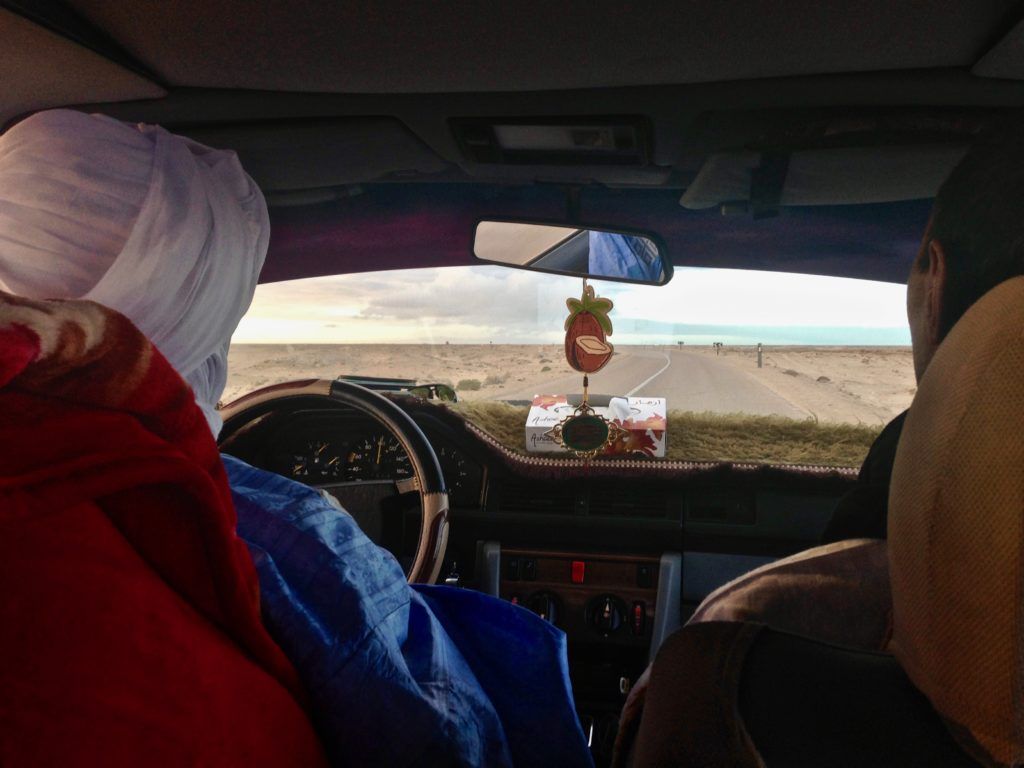 On the way into Mauritania

We made it into Mauritania. Mauritania was still mostly desert, with patches of palm trees and camels. We passed villages made of plywood walls and tin roofs. When we finally stopped to pray, I was starving. The driver took me to a spot to lie down and I began to nod off. I woke up to the sound of a crackling fire. The men were cooking two huge beef ribs, and we all sat on the ground taking turns cutting off pieces of meat and passing it on a knife. When my turn came, I burnt my hand trying to cut the beef and everyone had a good laugh. After that, I lost knife privileges and everyone would just toss me a piece of meat after they cut their own. We sopped up the juices with bread afterwards. The driver refused to let me pay.

The capital city of Nouakchott barely had paved roads. I was stunned by the amount of physically ill people living on the street. I spent a night there and then found a shared taxi to the border of Senegal. There was one man, an English teacher, in the taxi when I arrived. A little while later, a car full of young people stopped beside us and we then squeezed 7 people into a Mercedes with 5 seats. I spent the next 5 hours sharing the passenger seat with my new 200-pound English teacher friend. I tried to take a picture of us riding this way but he refused, saying it would make his wife jealous. 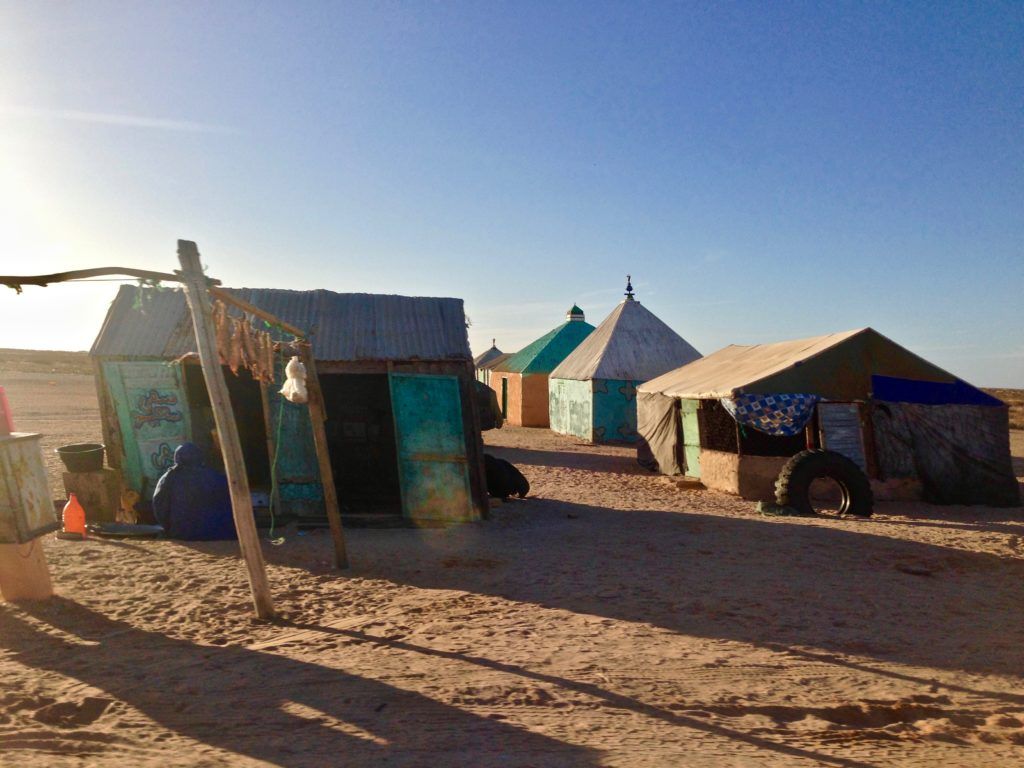 Approaching Nouakchott, the capital of Mauritania 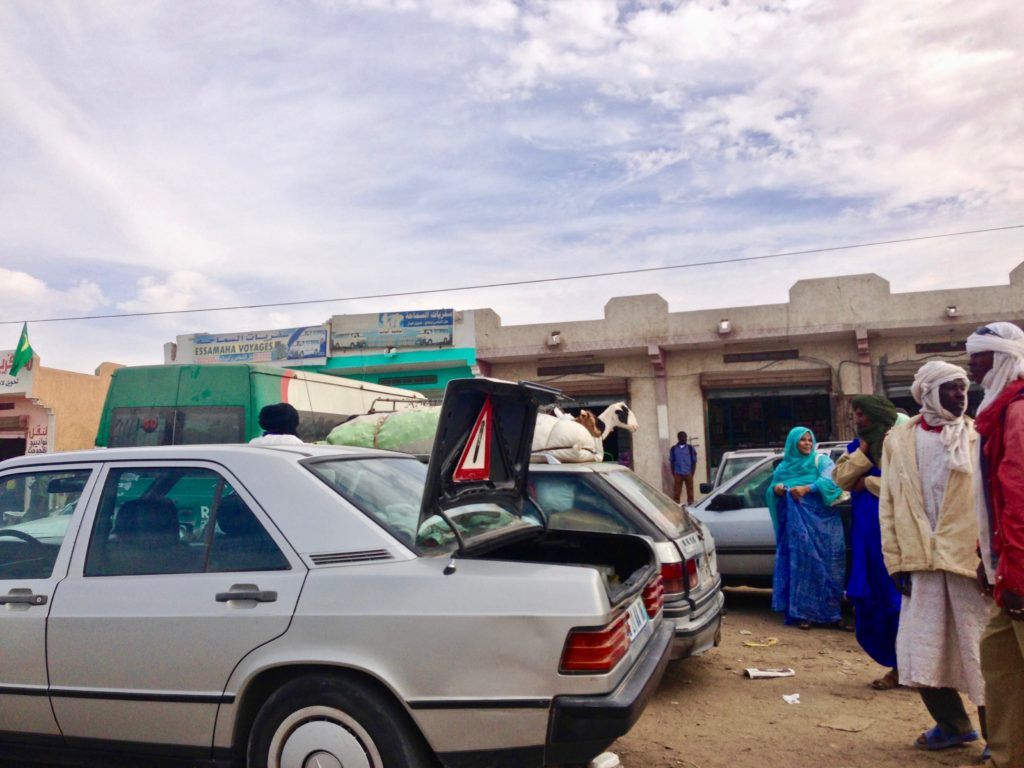 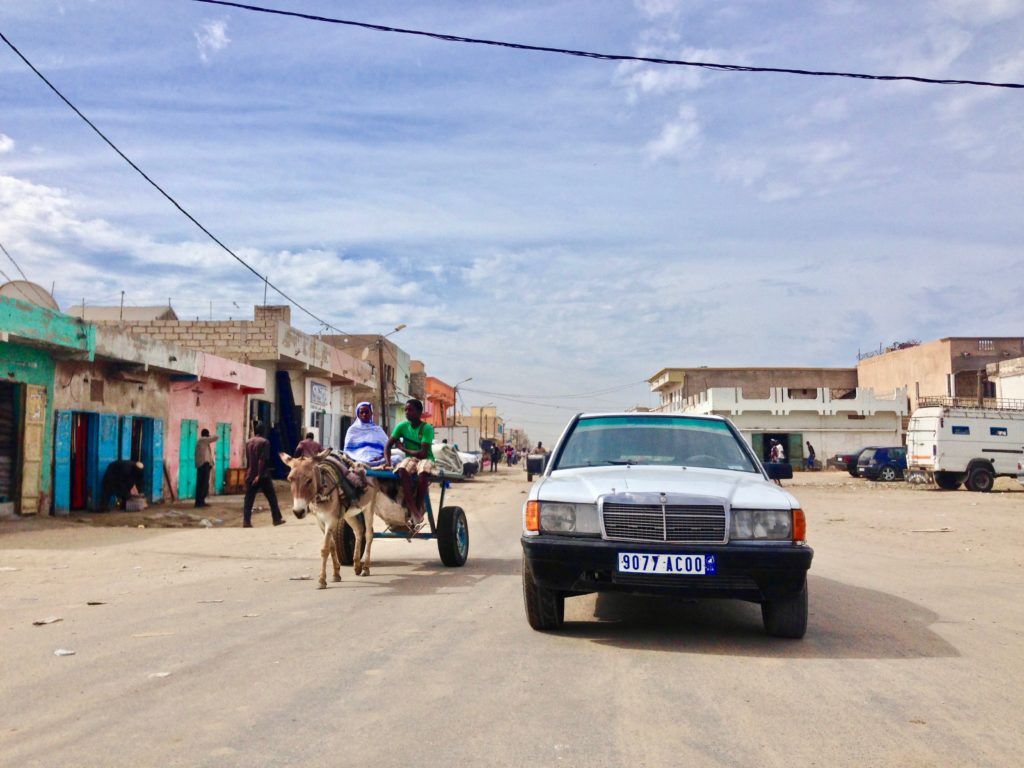 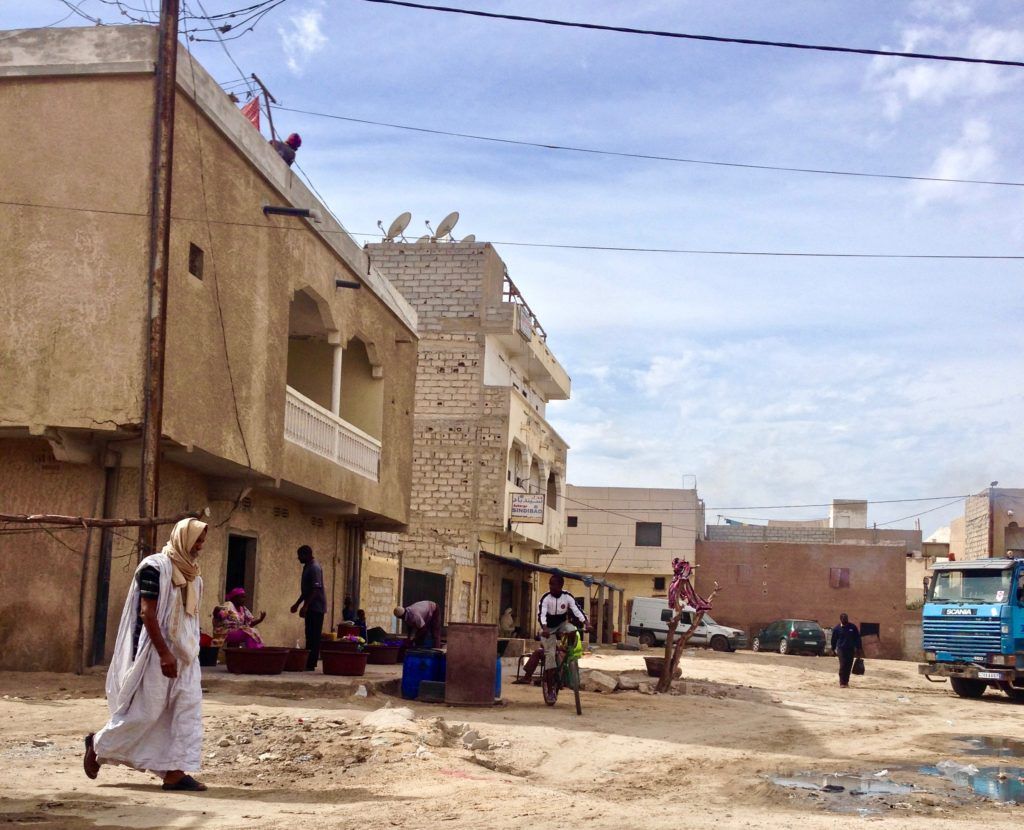 At the border, we took a long canoe-like boat across the river into Senegal and then another shared taxi to St. Louis. I stopped a young Senegalese guy about my age to ask him for the time. His name was Cherif and he immediately invited me to stay with his family. For the next week, I was welcomed into his life: playing soccer, visiting the city, and meeting his friends. When I asked how I could repay him for the hospitality, he asked me to buy him and his mom a toothbrush and toothpaste.

Cherif had a friend named Kouyote Issa, one of the most amazing people I have ever met. His door was always unlocked, his food always shared, he spent most of his time in a school/refuge he ran for street children. Through Issa, I met an American named Andrew, who helped Cheriff get an internship in video editing in Dakar. Cherif and I then traveled to the capital together to stay with his aunt and meet Andrew. 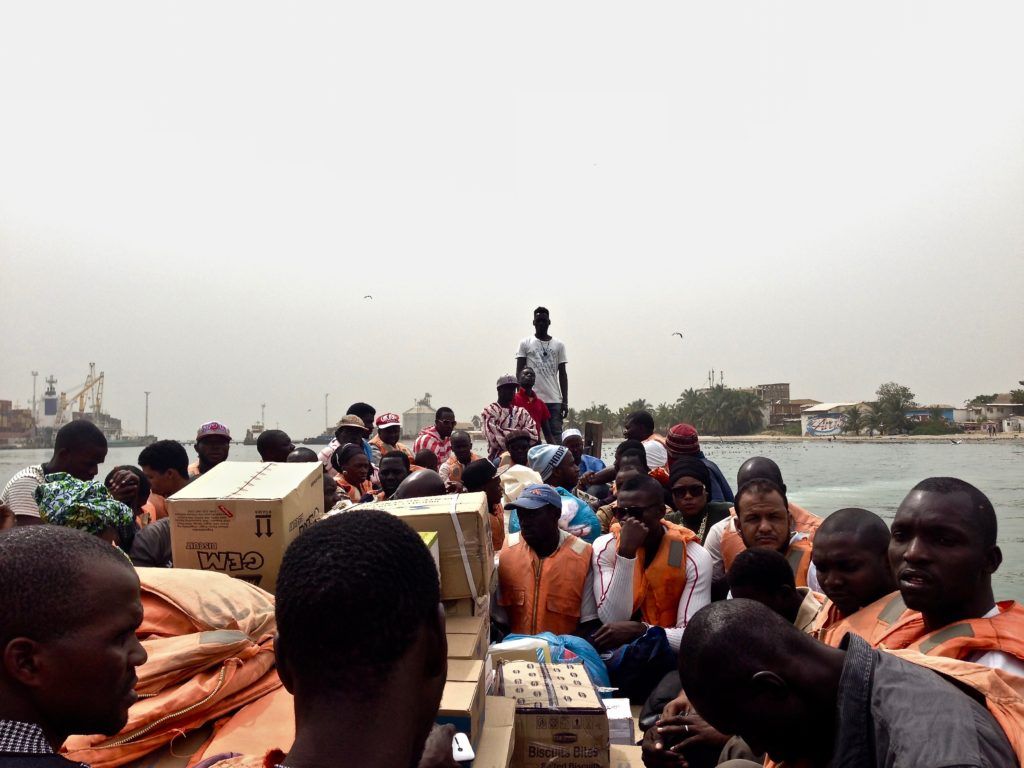 Crossing the border into Senegal by boat 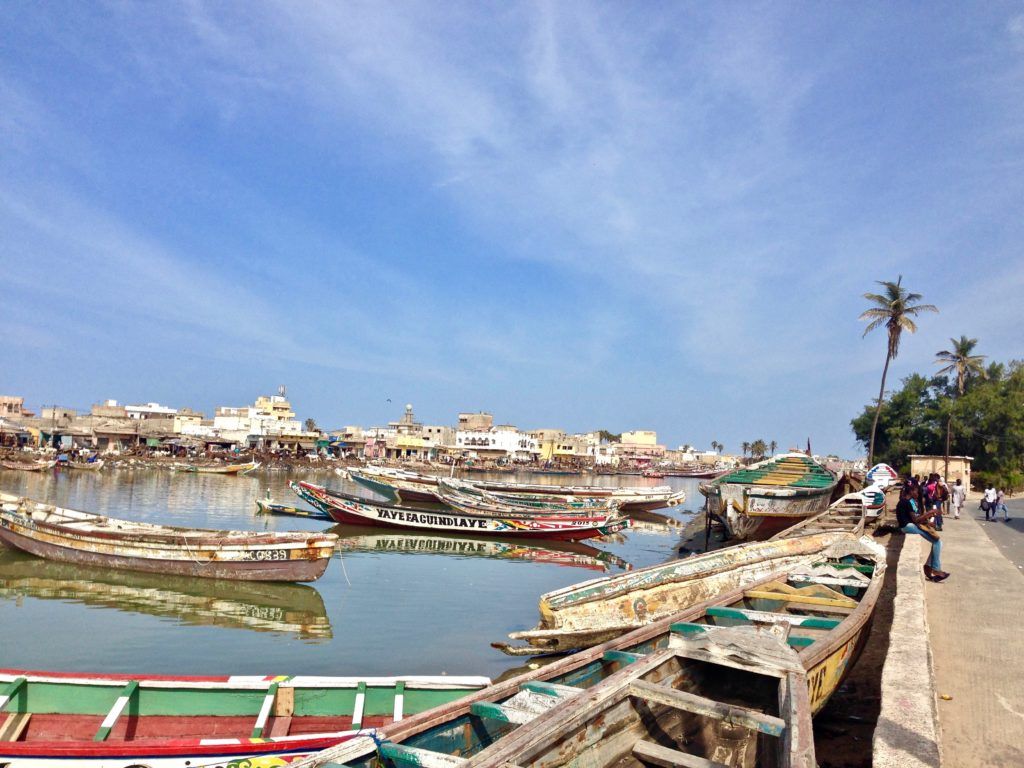 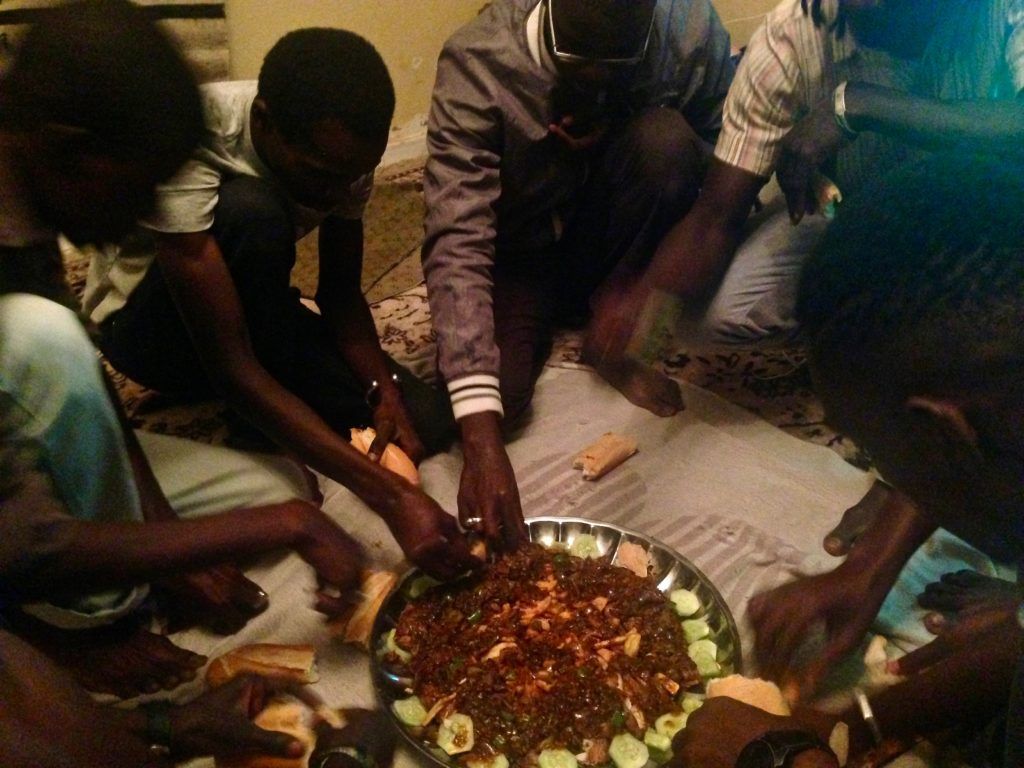 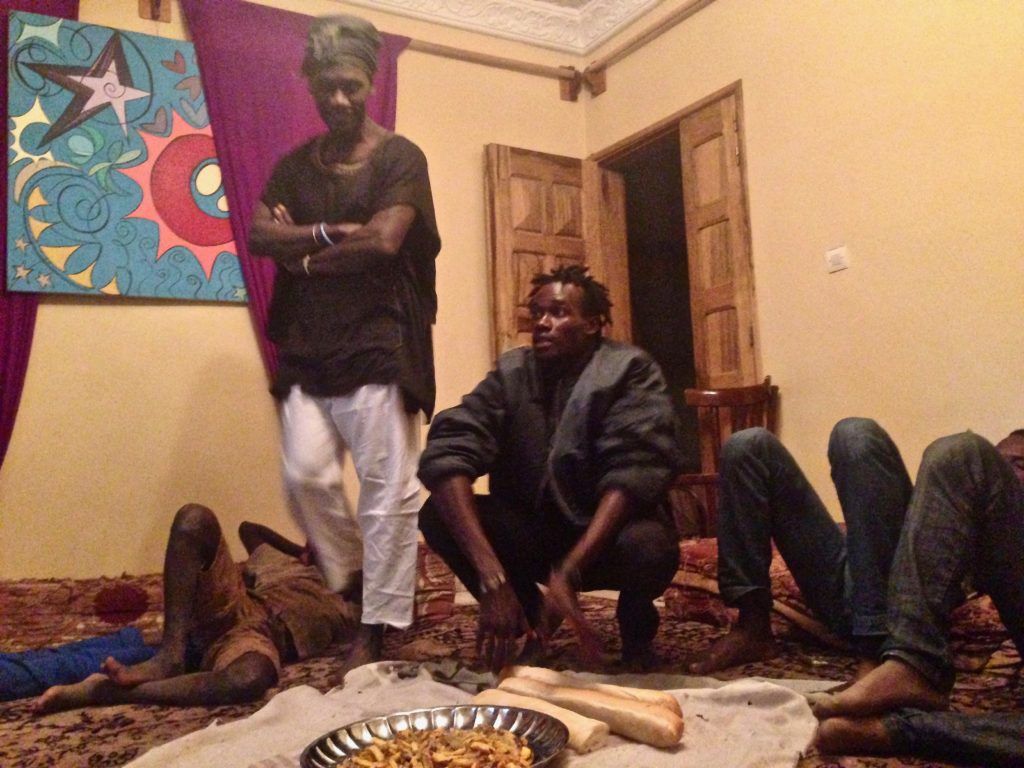 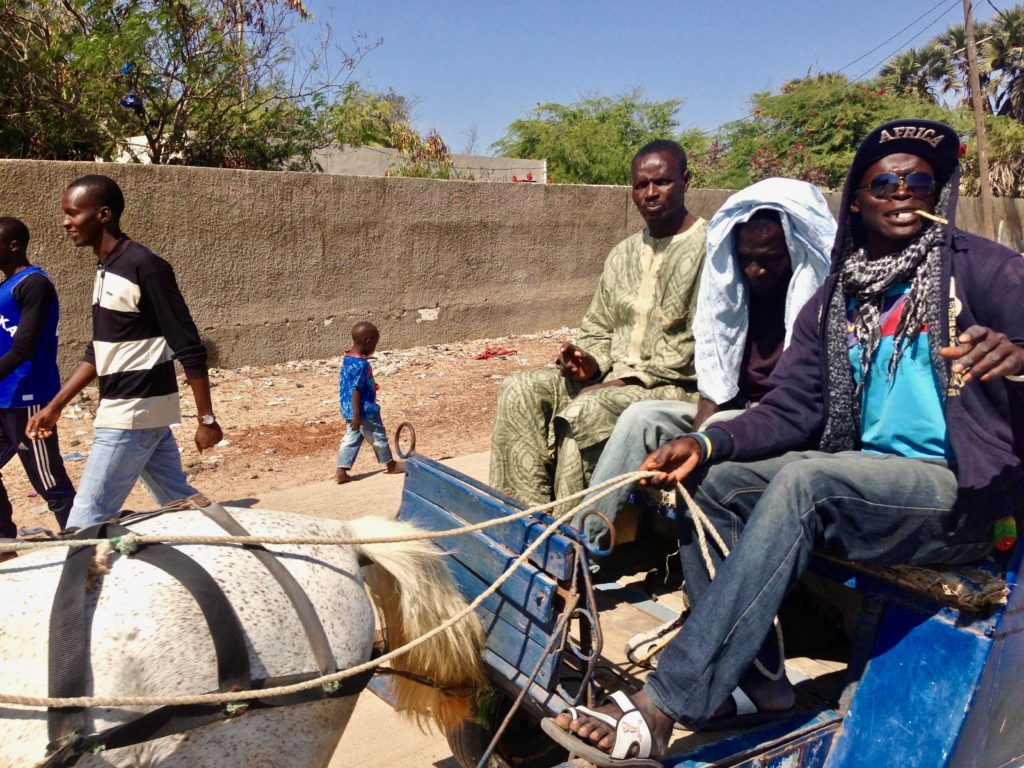 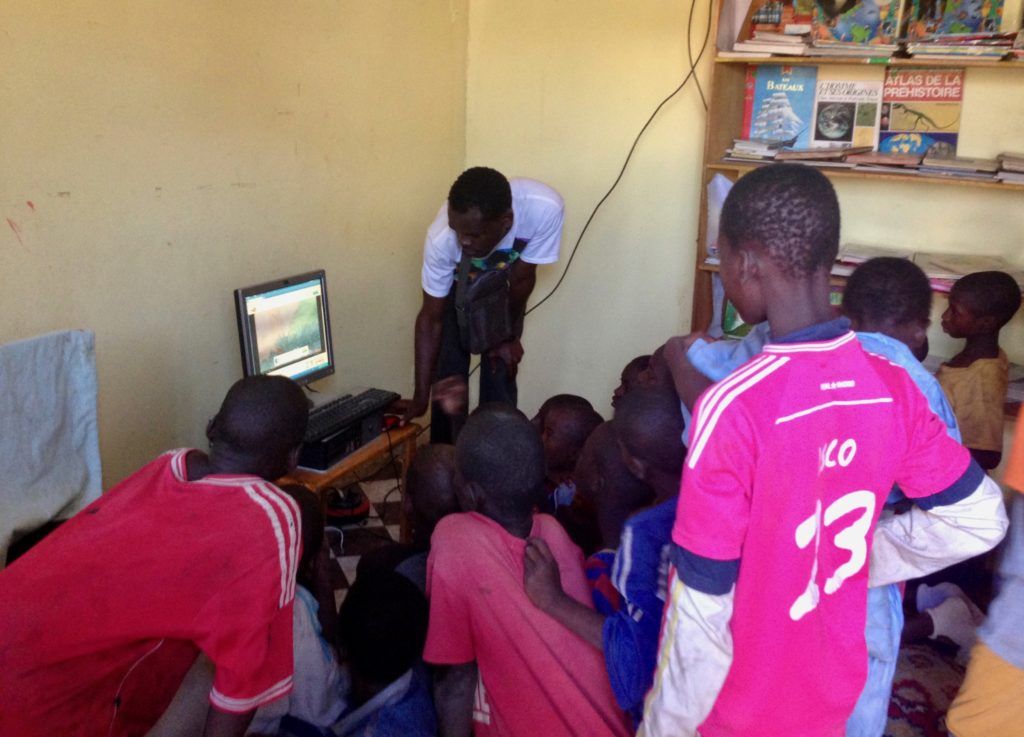 Later, at Andrew’s suggestion, I went to Kedougou, a 12-hour bus ride away in the far corner of Senegal beside Mali and Guinea, and met Jake, a Peace Corps volunteer out there.

Jake took me on a 25-km bike ride out to his village — but my bike broke down in the first mile. A stranger with a motorcycle rescued me and took me, my bike, and his groceries up a mountain to the village where Jake lives — 2 hours before Jake would arrive. Which left me in a West African village, unable to speak the native language whatsoever, hours before the arrival of my new friend. Luckily Jake called the chief and he came and took me in. We took turns pointing at things and saying them in our languages until Jake arrived.

I spent a few nights sleeping in a hut on the ground, eating food grown on the same land I was sleeping on, and enjoying the night sky with no lights or electricity for miles. Jake would translate and tell me about the customs and village drama. I wish I had spent weeks out there with him and his family. Instead, I returned to Kedougou. A woman I met on the bus ride there, Fadimata, invited me to Tambacounda, small city 4 hours away. I stayed for two weeks with her family of one dad, three wives, and twelve children. I joined Fadimata’s band as a bassist and we played two or three shows, sometimes with crowds of up to 100 people. 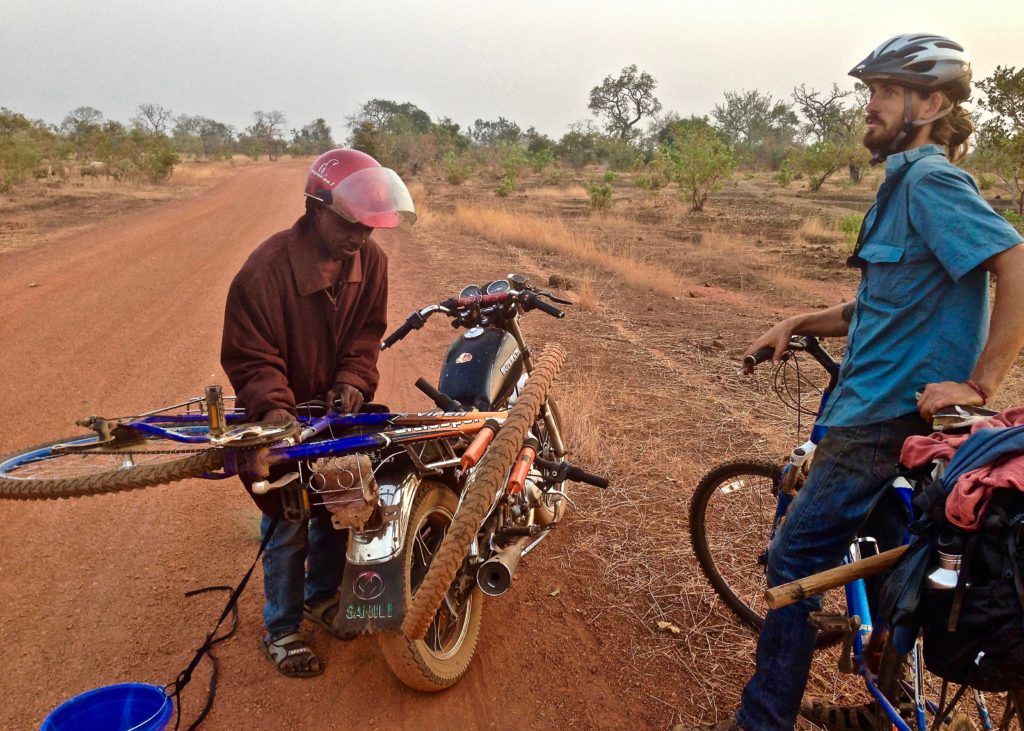 Biking with Jake to the Peace Corps village. 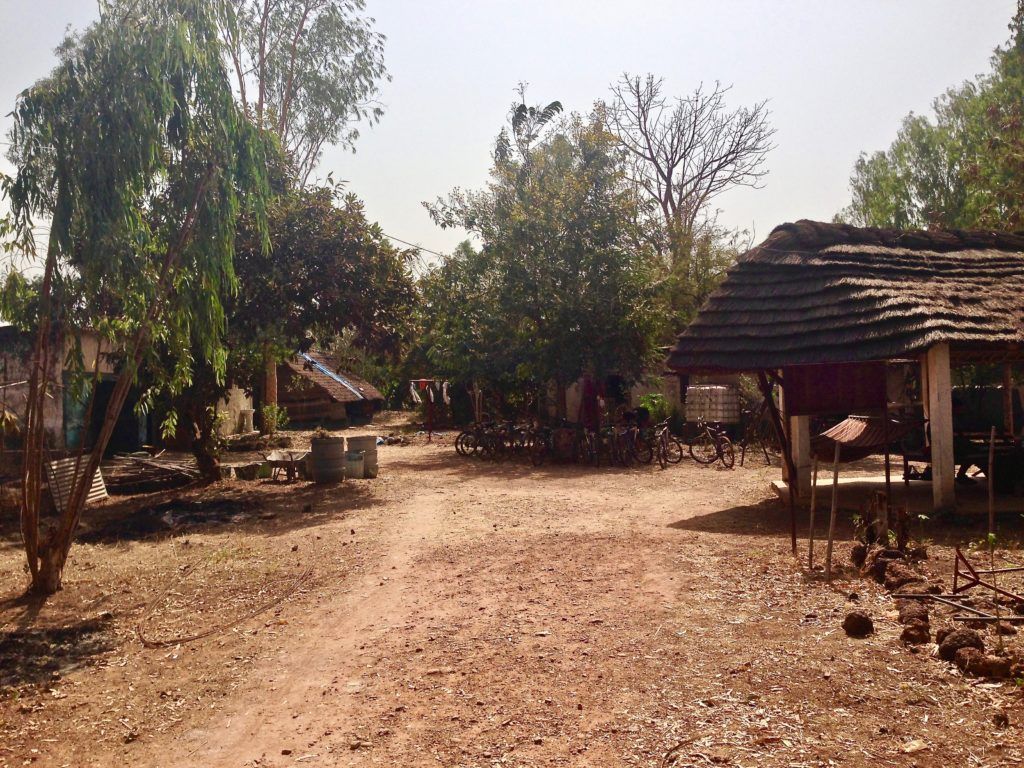 Around New Year’s Eve — which I spent on the beach in the south with a language teacher I met at the general store — I received a call from work. I’d been gone four months, though I’d told them I’d be gone one. They wanted me to do some visual effects for a TV show starting in a week.

I was going broke. Lured back by the opportunity to make more money and plot future adventures, I hopped a flight from sticky, 100 degree Dakar to the freezing winter in New York.

This article originally appeared on Trips Unscripted and is republished here with permission.

Tagged
Narrative Morocco Mauritania Senegal
What did you think of this story?
Meh
Good
Awesome

Senegalese Thieboudienne Is a Dish That Feeds, Satisfies, and Unites

Rap Is Resistance in Slave-Owning Mauritania