If you’re not a hard-core globetrotter, but still enjoy exploring the national parks throughout the year, flying to Vegas for the weekend, or have plans to visit out-of-state family for the holidays, then you need to be aware of the changes for US citizens traveling domestically going into effect on October 1, 2020.

In 2005, the United States passed the REAL ID Act mandating that all state-issued identification be compliant with their minimum security standards meant to improve the validity of an ID by adding security markings. States have been given over a decade to phase in compliant IDs, with over half of the United States given extensions to achieve compliance. What this means for you is that if your state-issued ID, such as your driver’s license or your identification card, is not compliant, TSA will no longer be able to accept them for domestic flights beginning October 1, 2020. According to the US Travel Association, 99 million Americans still do not have compliant identification.

These security measures only matter if you’re flying in a regulated commercial airplane domestically or entering a federal building or military base, though they will not apply to you if you’re boarding a bus or train throughout the United States. If your state has received an extension, it’s up to the discretion of the Secretary of Homeland Security to decide whether or not it’ll be renewed — but why take any chances when you have time to apply for a passport?

State participation in the REAL ID Act is voluntary, so make sure to check whether your state-issued ID is compliant in the map below. 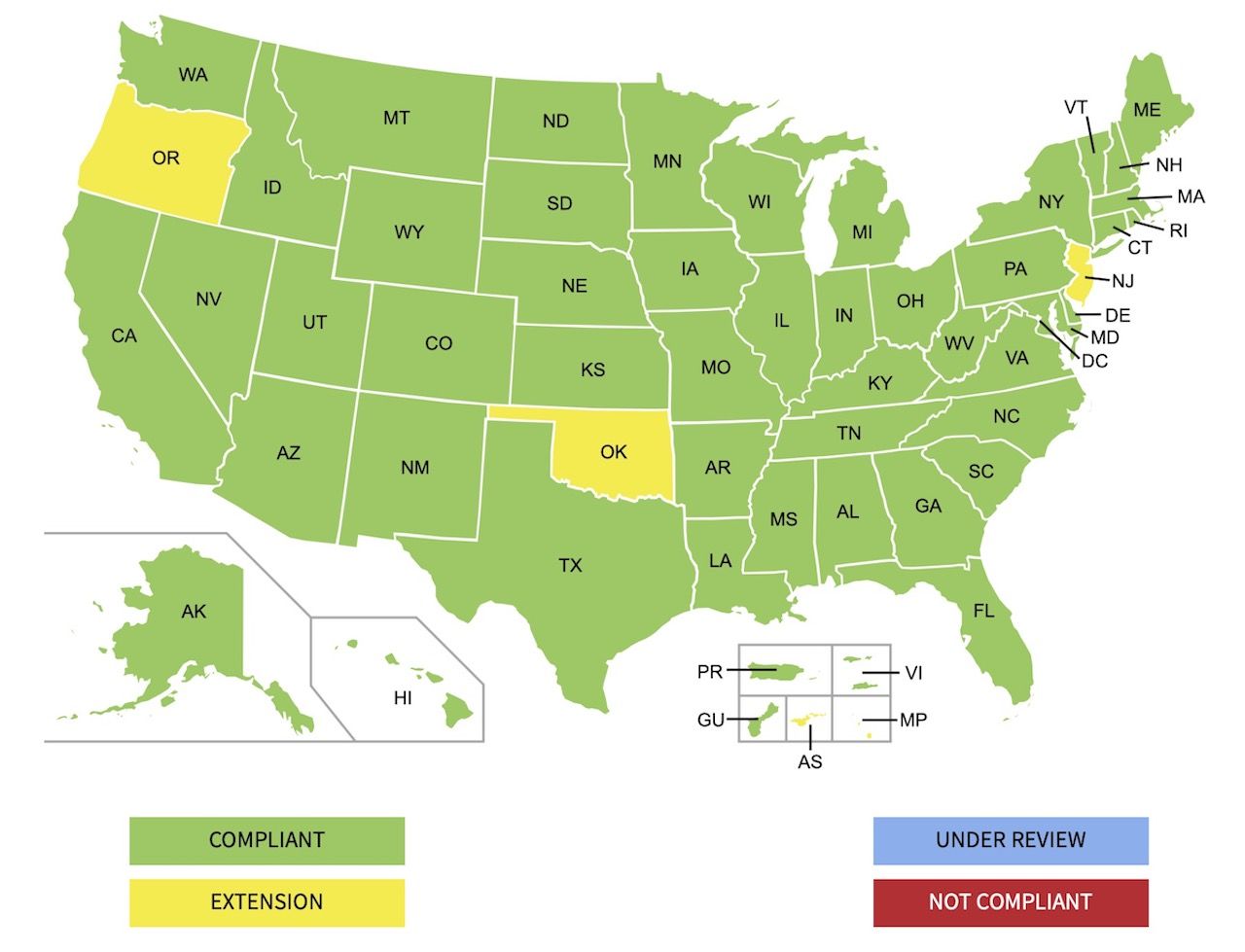 Photo: US Department of Homeland Security

What do I do if my state has received an extension, is under review, or is not compliant?

Get moving. Apply for a passport, or a passport card now, even if you only intend on traveling domestically. Passport applications can take some time, and if you’re behind on your taxes, you may be denied one, so get organized and start the process as soon as you can. We suggest that you order a 52-page passport at no extra charge, so that if you ever go abroad, you’ll have room for all the visas and stamps required. After all, you never know when you’re going to win an all-expenses paid trip to Fiji.

Is my state-issued Enhanced Driver’s License acceptable by federal agencies?

Yes, it’ll be sufficient. State-issued enhanced driver’s licenses are designed to provide both proof of identity and US citizenship. These licenses allow for traveling between the United States to Canada, Mexico, or the Caribbean due to the RFID (Radio Frequency Identification) chip and barcode on it. If you’re lucky enough to reside in Michigan, Minnesota, New York, Vermont, or Washington, these are currently the only states that issue Enhanced Driver’s Licenses.

Will I be turned away by TSA if I don’t have a license from a compliant state?

Yes, you’ll be turned away if you don’t provide an alternate form of ID that is compliant with the REAL ID Act, such as a passport. Acceptable forms of ID include:

Does this apply to minors?

No, children under 18 don’t need to provide ID when traveling with a companion within the United States. The companion will still need to have valid compliant identification.

A version of this article was previously published on July 30, 2018, by Evangeline Chen, and was updated on October 3, 2019, by Tim Wenger.

Airports + Flying4 ways your passport can keep you from traveling that you never knew of
Tagged
Airports + Flying Trip Planning
What did you think of this story?
Meh
Good
Awesome

The case for, and against, a vaccination passport