Nicaragua is famous for its dramatic landscapes and known as the “land of lakes and volcanoes.” There is a chain of some 19 volcanoes, part of the Central American Volcanic Arc that runs north to south down the country. Regardless of whether or not they’re active, many of the volcanoes have hiking trails that offer a look into the different ecosystems and endemic flora and fauna, as well as jaw-dropping views. They are also a cool way to get in some exercise — not many people can say they hiked along a volcano.

The terrain on each volcano varies, which affects the hike’s difficulty, distance, and the time it takes to complete. Some require the aid of a guide and serious hiking gear; others are gentle enough to do on your own with just a good pair of shoes. Even if you’re not the most physically fit person, some hikes are relatively easy or offer several places to take a break so there’s no excuse to avoid one of the best parts of this tropical country. Here are four of the coolest volcano hikes you can do in a day. 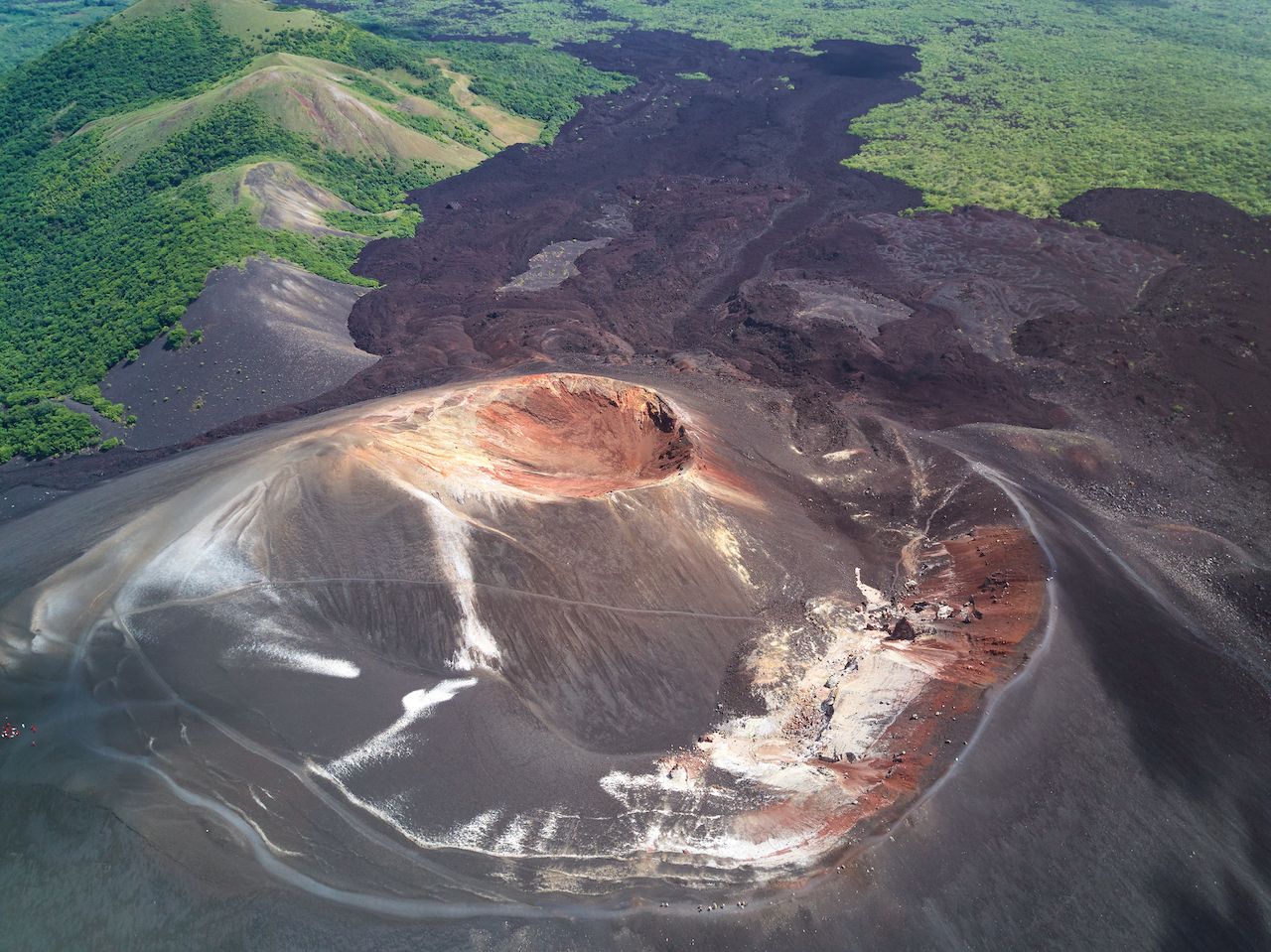 A relatively young volcano in Central America, Cerro Negro is unique in that there is no greenery or vegetation to be found anywhere on it. Its color is somewhere between black and dark gray, which is fitting considering its name translates to “black hill.” Hiking to the roughly 2,000-foot top can take anywhere between 45 minutes and an hour. The views at the top are otherworldly, and hiking around sunset makes the experience even more idyllic. Because the volcano is still active — with its last eruption occurring in 1999 — the ground by the crater is warm, and gas can be seen emitting from small holes. It’s a moderate hike, but it is a constant ascent, and the way up is extremely rocky, so having shoes with a good grip is a must. Once at the top, the ground plateaus, so it’s easier to walk around.

While you can hike back down the same way you came, popular among both Nicaraguans and tourists alike is volcano boarding. One of Cerro Negro’s sides is comprised of soft volcanic sand, which makes it easy for people to hop on a board and slide all the way down. It’s closer to sledding than say, snowboarding, as you’ll be sitting the entire time. Volcano boarding with a tour company is essential as it’ll provide all of the necessary gear, such as a suit, gloves, goggles, and the specific board needed for the activity. It’s important to note that should you choose to volcano board, you will have to carry all of the equipment yourself while hiking, but most companies offer porting services for a fee. While it may seem nerve-wracking, it’s surprisingly easy as you can control your speed. If you slide off the board, it’s akin to rolling in sand at the beach. Just get back on the board and you’re good to go. 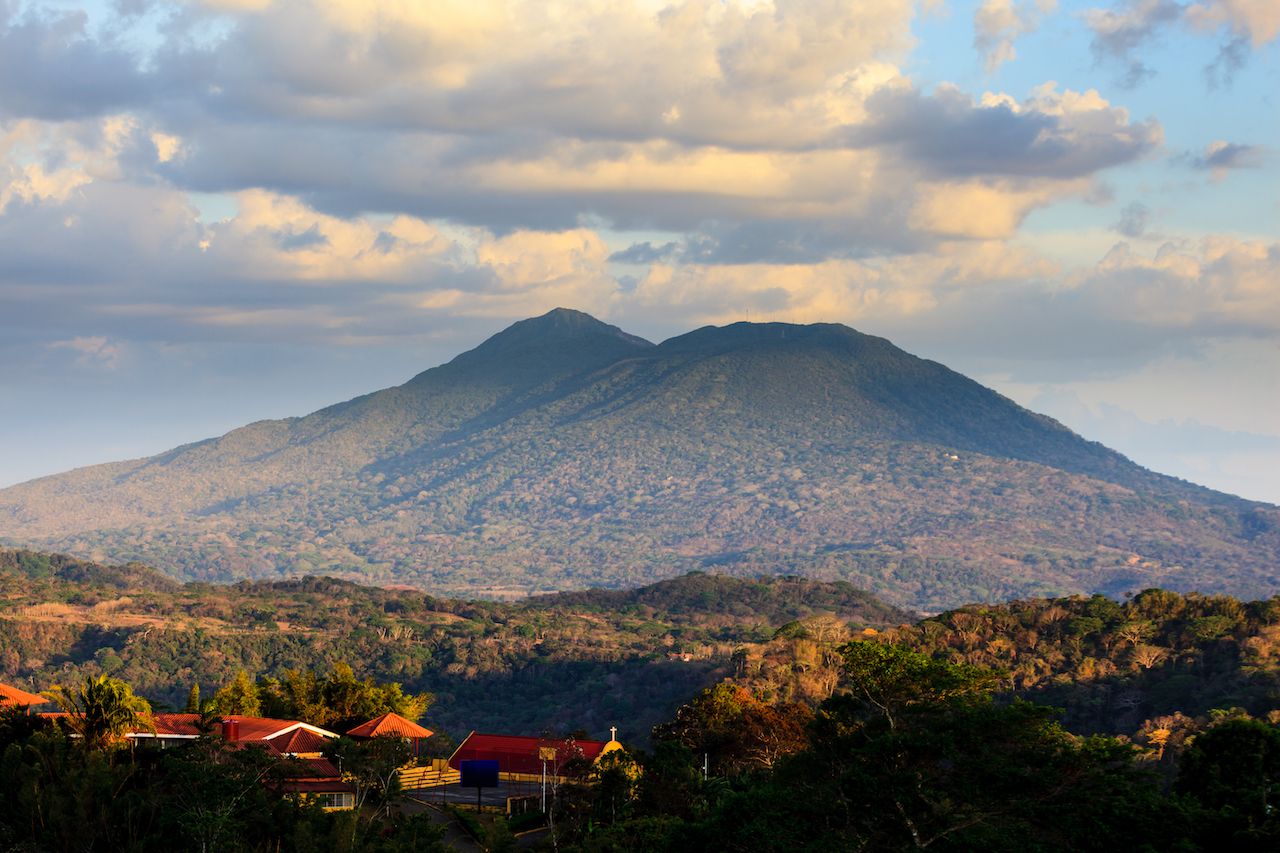 Mombacho is a stratovolcano that’s over 4,000 feet tall. While it’s not yet classified as extinct, it has been dormant since its last eruption in the late 1500s. Information suggests that an eruption thousands of years ago, when the volcano blew off much of its cone, was what formed the archipelago known as the Islets of Granada in Lake Nicaragua.

Mombacho is open to visitors year-round, and hours of operation are from 8:00 AM to 4:30 PM, with the last admittance being at 4:30 PM. There are two different ways to reach the summit: walking or driving. The road up to the summit is paved, but it’s incredibly steep. Hiking up to the summit will take at least two and a half hours, but driving should take around half an hour. If driving on your own, it’s recommended to bring a 4×4; otherwise, there’s a truck that takes people up to the top for a small fee, as well as various tour companies. Be sure to keep an eye out on the way — you’re likely to see a monkey or two traipsing around in the trees. At the summit, there’s a tourist information center where you can learn about the flora and fauna that can be found on Mombacho, and it’s also your last chance to use the restrooms before continuing on.

No matter how you arrived at the summit, the rest of the journey will be on foot. There are three craters available to hike around: El Cráter, El Tigrillo, and El Puma. El Cráter is the easiest of the three and can be done self-guided or with a guide, which is a small additional cost if you’re not with a tour company. It takes an hour and a half, with a distance just under a mile. El Tigrillo is a difficult hike that takes about two and a half hours to complete. El Puma is the hardest at four hours long and can only be done with a guide. Each trail has a number of miradores, or lookouts, where you can observe the crater, surrounding ecosystem, and amazing views beyond the volcano. Because Mombacho is covered by a cloud forest, it can get quite humid, so you’ll want to dress in light clothing; otherwise, no other serious equipment is needed. In addition to hiking, Canopy Tour Miravalle also offers zip-lining and canopy activities on the volcano. 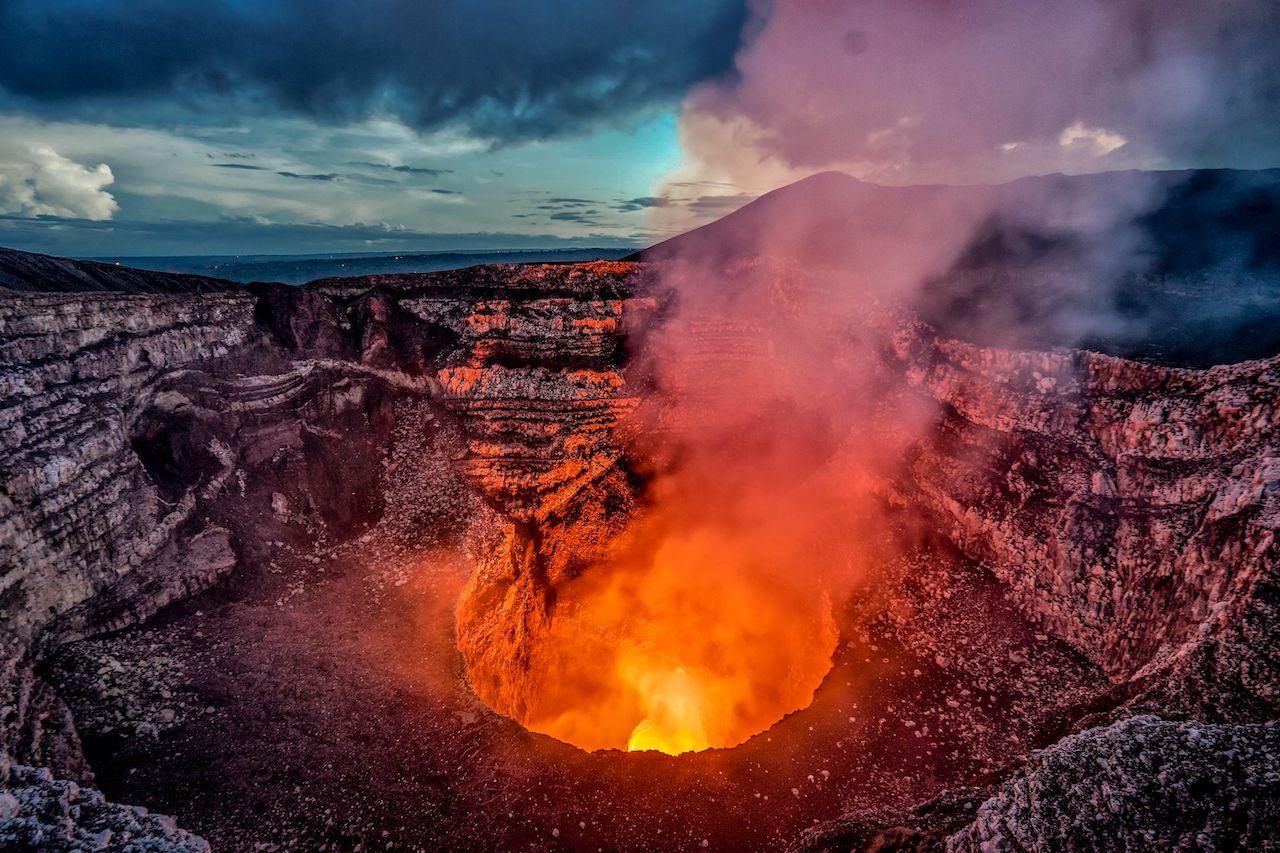 Masaya is one of the more active volcanoes and is part of Masaya Volcano National Park, the first national park in Nicaragua. It’s a little over 2,000 feet tall, and the terrain on this volcano is very Mars-esque — some plants here and there, but red rocks and dirt abound. Getting to the entrance of the national park can be done via hiking or driving and, as with Mombacho, driving can be done on your own with a 4×4 or with a tour company or one of the public trucks. It’s important to note that while Masaya is typically open from 9:00 AM to 5:00 PM, hours of operation are weather dependent. For example, if there’s heavy rain in the area, it will close for several hours or even the day.

At the entrance, there are several hiking trails to different sites on the volcano; these vary in distance from just under a mile to nearly four miles. Due to volcanic activity, the only open trail at the moment is the one for the main Santiago crater, which is an easier and straightforward hike. It’s this crater, however, that offers visitors a chance to see lava. How much lava, if at all, is dependent on the time of day and the weather, and it’s popular to visit toward the end of the day when it’s getting dark out for a better chance. There are many legends about the Santiago crater, ranging from sacrificial rituals to being a gate to hell. In the 16th century, Spanish conquistadors nicknamed the crater the “Mouth of Hell” and planted a giant cross, “La Cruz de Bobadilla,” on one of its sides to expel any demonic activity.

Closest major city: Masaya, equidistant from both Managua and Granada 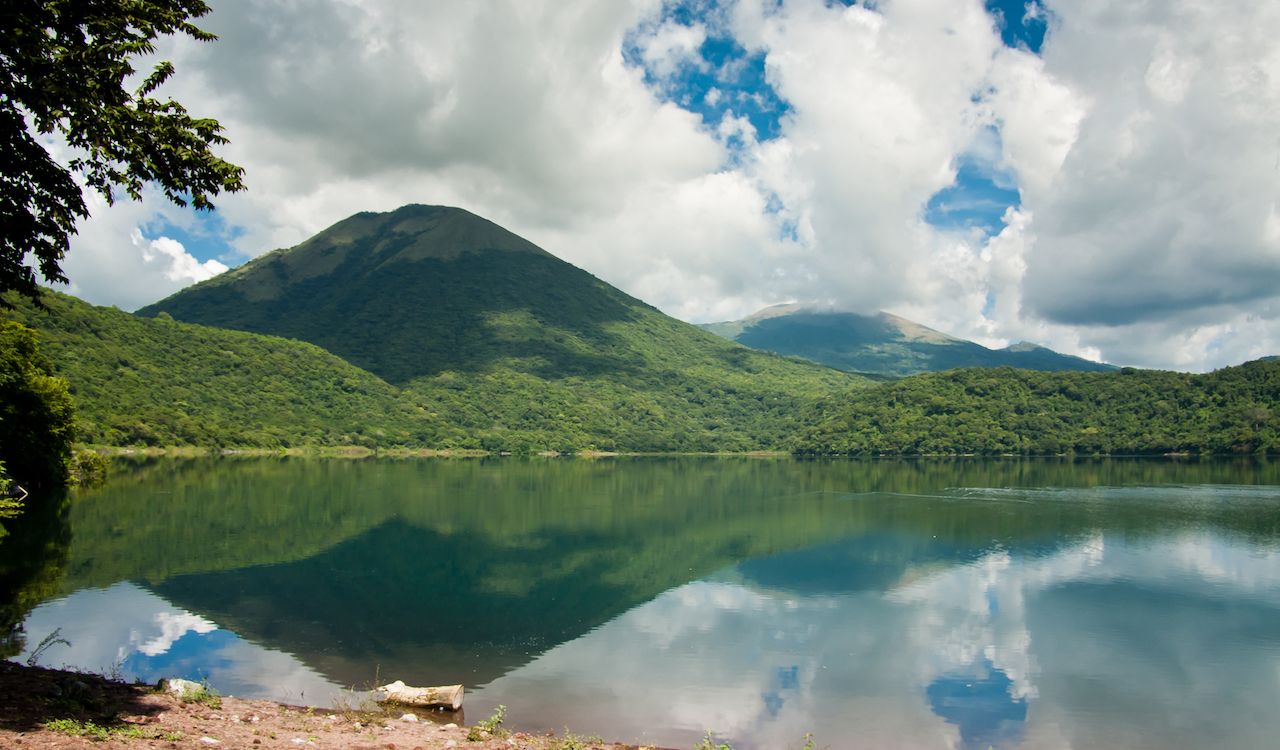 Reaching a height of almost 4,000 feet, El Hoyo is unlike any other volcano in Nicaragua. Its crater looks like a giant sinkhole — its name fittingly translates to “the hole” — and is on the side of the volcano rather than being centered. Hiking up El Hoyo has a medium level of difficulty, so it’s best for those used to hiking uphill and with a decent amount of physical fitness. The first part of the hike is devoid of much nature and shade, so it’s important to bring a hat to provide relief from the sun. Closer to the crater, the surroundings are much greener, which makes El Hoyo look unlike the active volcano it actually is. While hiking later in the day offers the opportunity to see the sunset over Lake Managua and the Momotombo volcano in the distance, it’s more common to begin the hike around 5:00 AM to avoid the harsh sun.

Food + Drink10 Traditional Nicaraguan Foods the World Should Know About
Tagged
Hiking National Parks Nicaragua
What did you think of this story?
Meh
Good
Awesome