There’s something magical about watching water cascade over a series of drops or plummet from a high precipice and collect in a pool below. Around the world, there are few natural wonders that are as captivating and beautiful as waterfalls. Whether they’re viewed from the road or some remote path in the forest, it’s mesmerizing just to be in their presence. Of the more than 250 waterfalls in the state, here are our seven favorites in wild and wonderful West Virginia. 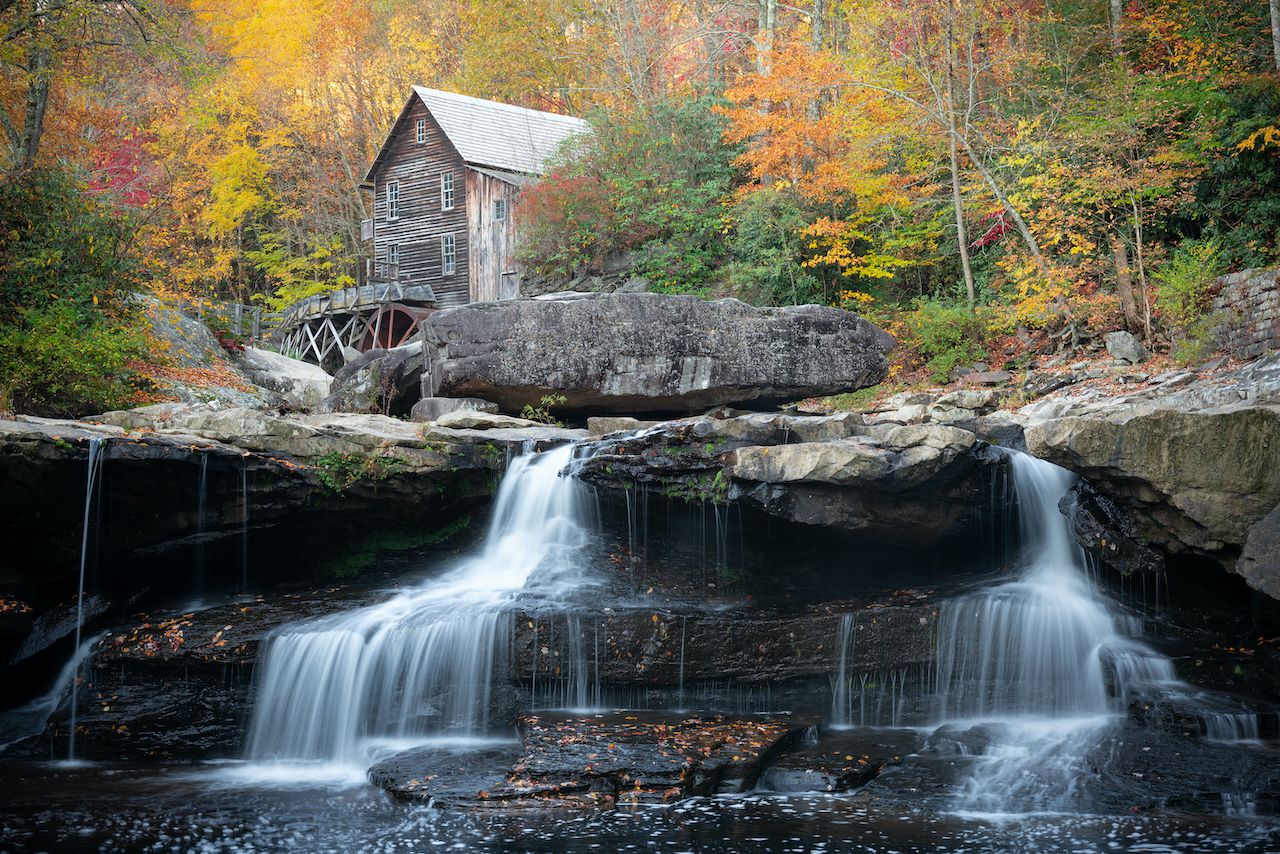 Located just 20 minutes from one of the nation’s newest national parks, and the only one in the state, Babcock State Park is a 4,127-acre picturesque treasure. The park is best known for the Glade Creek Grist Mill, completed in 1976, which is a fully functional replica that was placed near the site of the original Cooper’s Mill. When you view the grist mill from the bottom of the falls, you will soon realize why this is one of the most photographed places in the state (after the New River Gorge Bridge, of course). To get to the park from the iconic NRG Bridge, travel north on US-19 to US-60 east. The mill and falls are located near the park headquarters and gift shop. 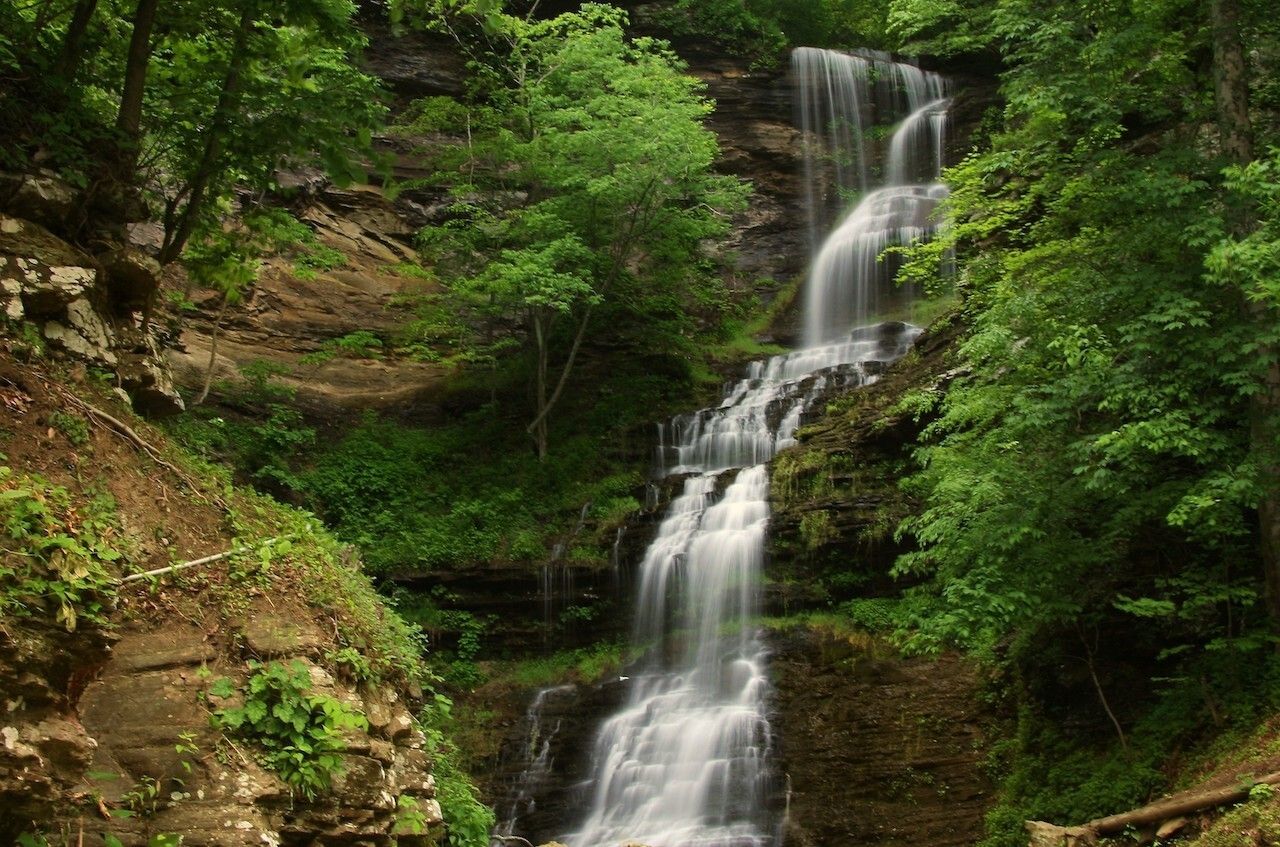 While it’s possible to view this 60-foot waterfall from the comfort of your car as you pass by it on US Route 60, it’s well worth taking a few minutes to park and embrace what may arguably be the most scenic in the state. During the drier months, Cathedral Falls can be reduced to a slight trickle but after rain or early in the season, the cascading veil is a sight to behold. Located approximately a mile east of the town of Gauley Bridge (40 minutes east of Charleston) and just a short drive from Kanawha Falls, this easily accessible waterfall has a small parking area to allow getting a closer look at one of the highest waterfalls in the state. 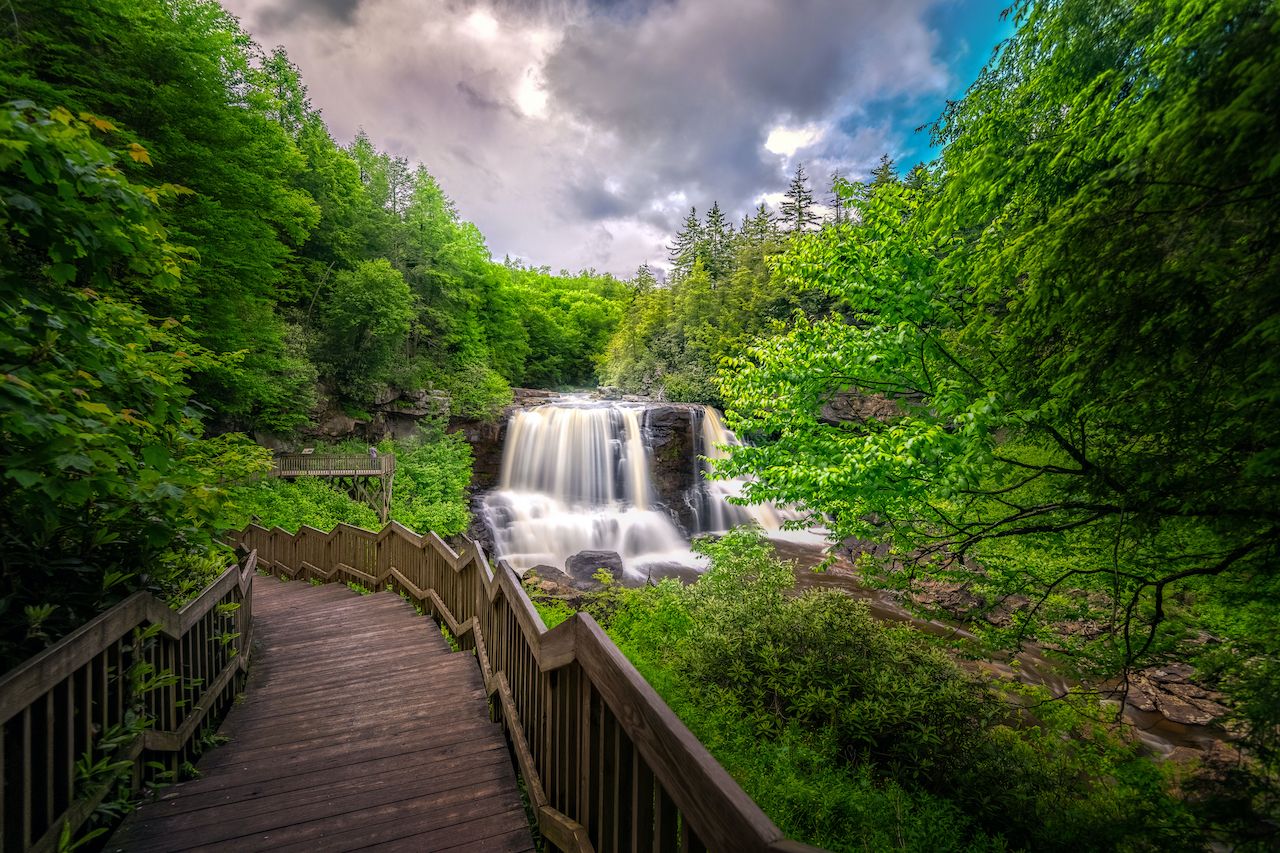 The Blackwater River cuts through its namesake state park. And while there are other cascading falls created as the river courses its way deep into the gorge, this one and Elakala are not to be missed. Located near the town of Davis, West Virginia, the state park is an easy and scenic drive from town that takes approximately 10 minutes. There are two options for getting a closer look at this more than 50-foot fall. The Boardwalk Trail, while still relatively short, can be easier going down to the observation deck than heading back up the several hundred steps. For a less-tiresome approach, consider the Gentle Trail which also leads to an observation deck but doesn’t entail a seemingly endless stair master workout. 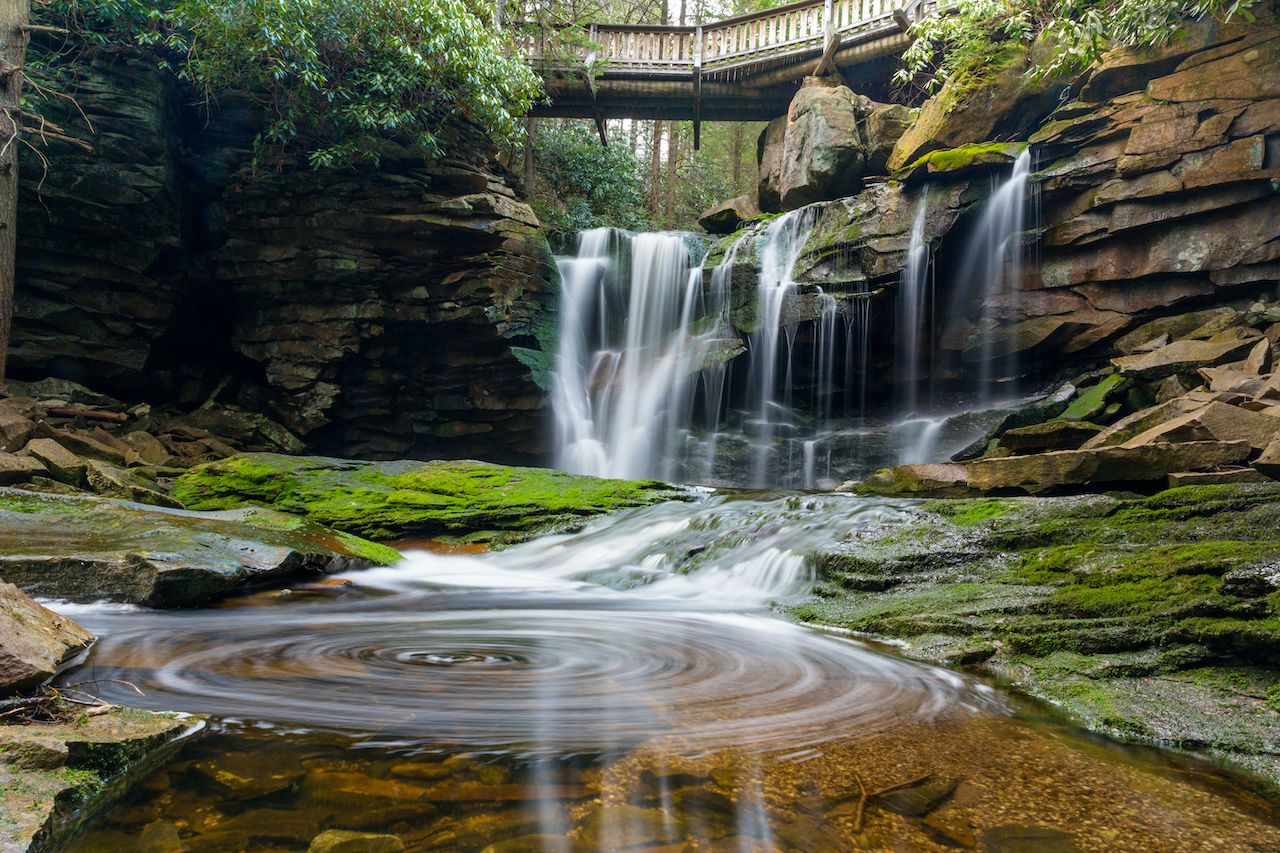 Also located within the Blackwater Falls State Park, it only makes sense to hit two scenic waterfalls while here. Elakala Falls consists of four cascading drops that plunge more than 100 feet. The trailhead is located behind the Blackwater Lodge, and this moderate trail takes you to a bridge across Shay Run that has a view of the first drop of the falls. And while it’s possible to descend to catch a better glimpse of the other three drops, there aren’t any official trails, and the descent could become precarious for those not prepared. Pendleton Point offers a glimpse of the entire waterfall from across the gorge. 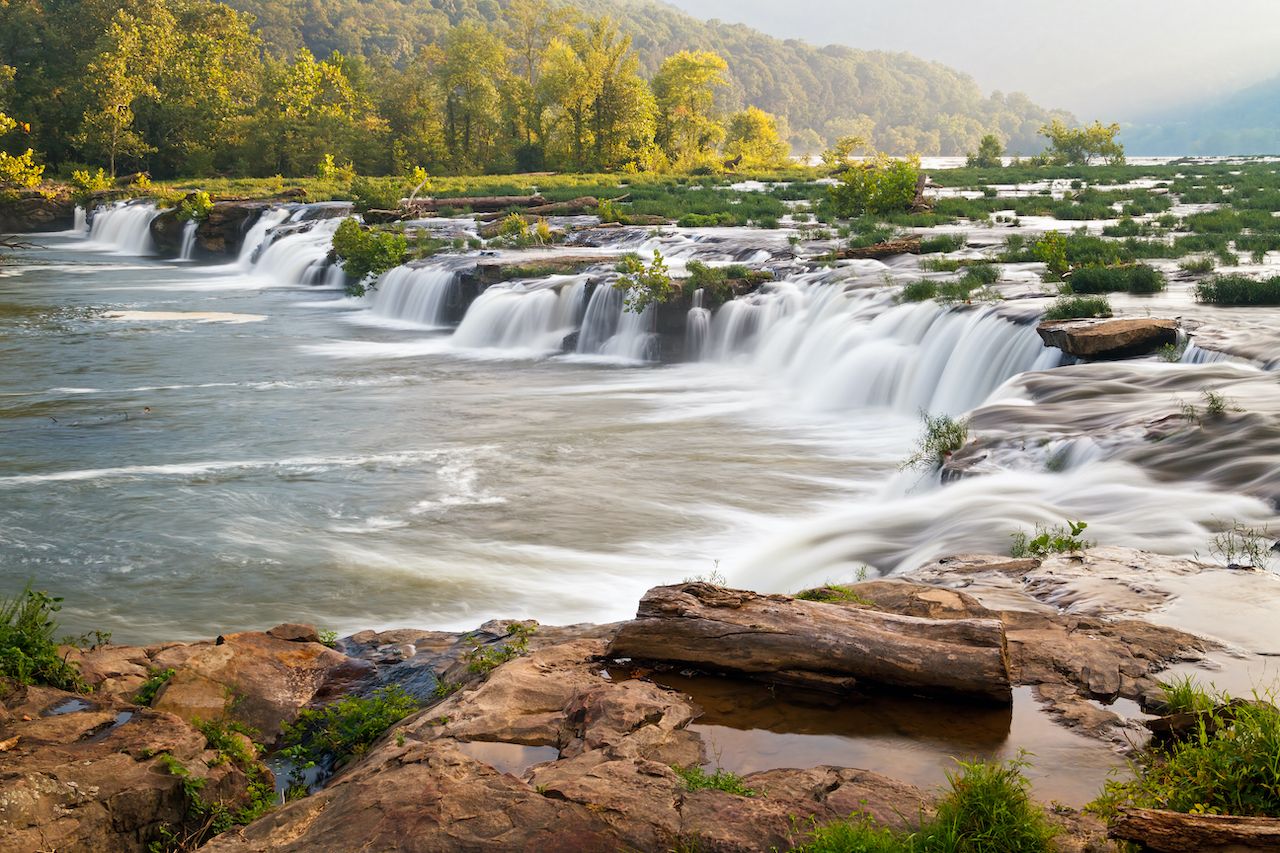 Like its name indicates, this waterfall spills over an expansive sandstone ledge that spans the width of the New River. Located just 10 miles north of Hinton (on River Road, WV Route 26) and downstream of the Bluestone Dam, Sandstone Falls is roughly a quarter of a mile wide with drops ranging from just a few feet to over 20 feet in height. And while it’s impossible to view the falls in their entirety from any one vantage point, there are several locations that offer spectacular views. Perched 600 feet above the river, an overlook provides a bird’s-eye view via a short gravel path from the parking lot located off of WV Route 20 approximately three miles south of the Sandstone Visitor Center. For a closer look, a quarter-mile boardwalk (accessible for those with reduced mobility) crosses several bridges and offers access to multiple islands and observation decks. To reach this option, follow WV Route 26 (River Road) from Hinton until you reach an unpaved parking area on the right. 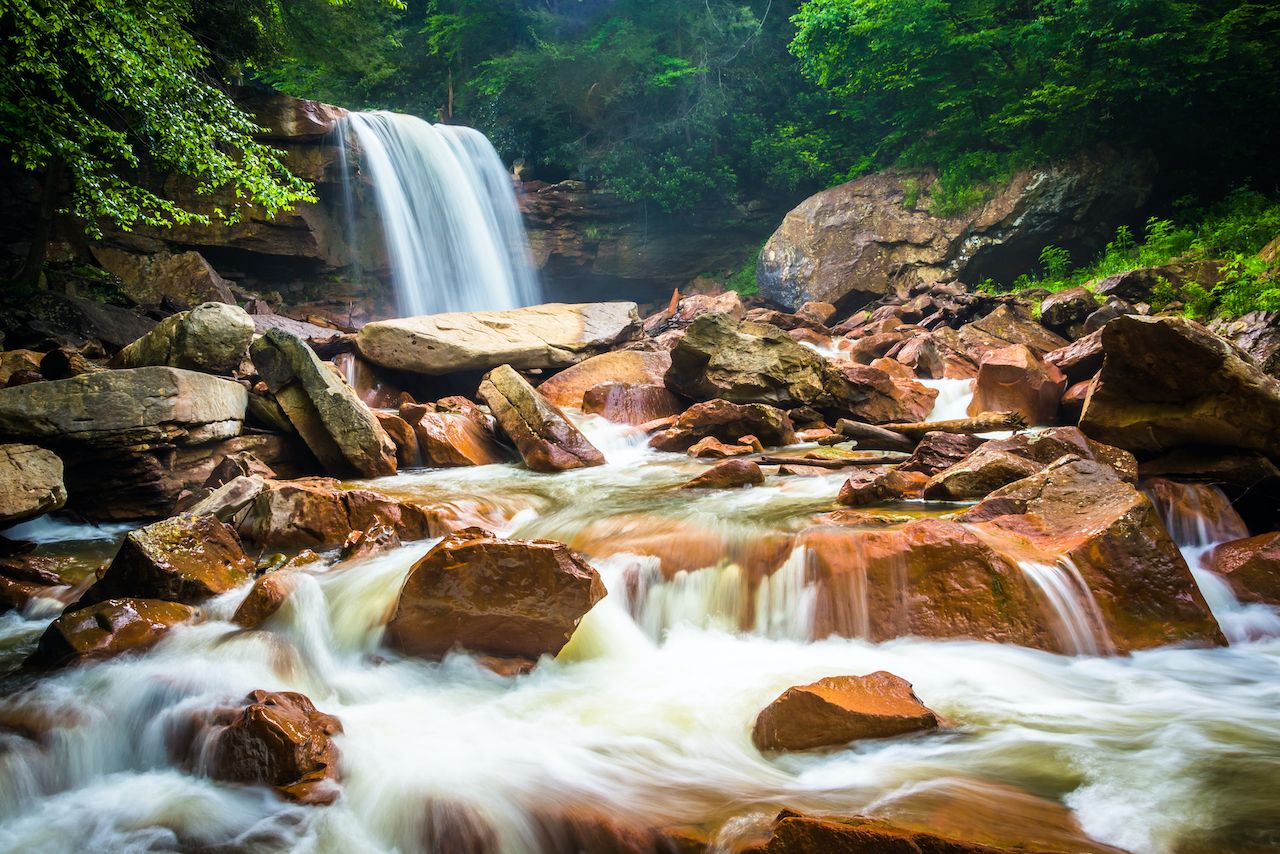 Fewer than 20 minutes from Blackwater Falls State Park is yet another scenic waterfall. However, if you’re traveling from the beautiful town of Thomas, take Douglas Road for approximately one mile until crossing the river. From here, take the left and follow until it dead ends. Fair warning, the last road is unpaved, but what awaits is spectacular. This setting is a photographer’s dream setting. The 35-foot drop collects in a pool below where the rocks are stained an orange hue from the coal mining operations that leached acids into the water. The orange rocks enhance the tranquil emerald water. Though it’s a quick walk to the base of the falls, it’s worth packing a lunch and enjoying this picturesque and remote retreat. 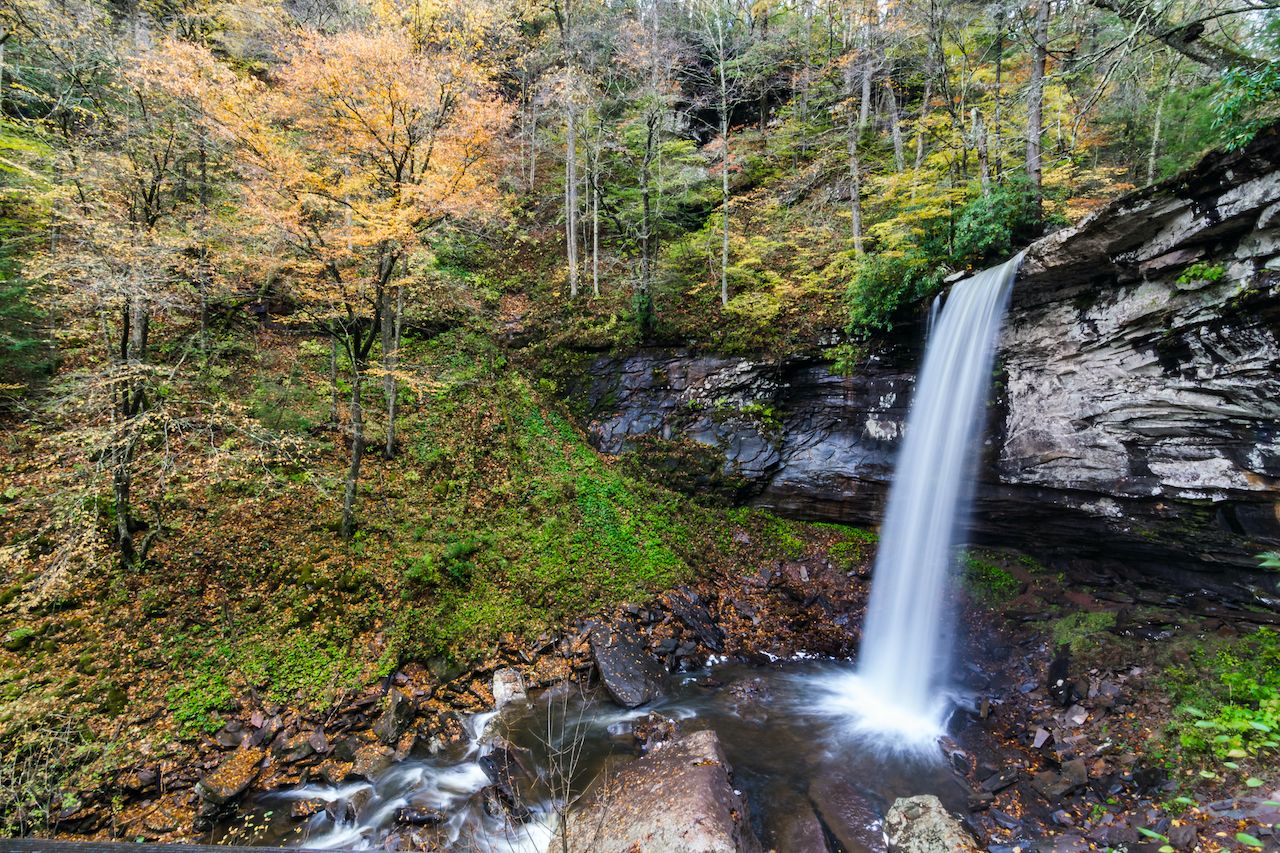 It’s three for the price of one. The Falls at Hills Creek are a collection of falls rather than a single waterfall. The first fall is accessible via a boardwalk (accessible for people with disabilities) while the other two require a little more effort. The upper fall drops 25 feet while the middle falls 45 feet and the third plummets almost 65 feet to the rocks below. From top to bottom, the creek drops over 200 feet. Situated on a little over 100 acres in the Monongahela National Forest, this collection of falls is located just south of Highway 39 and about five miles west of the Cranberry Mountain Nature Center.