WASHINGTON’S OLYMPIC PENINSULA is one the most interesting and diverse areas on the continent. Within the span of a day you can explore alpine tundra in the glacier-capped Olympic Mountains, visit the lush mossy temperate old growth rainforests of Hoh and Quinault, and then head out and catch a stunning sunset on the wave-battered coast. The rugged topography and endless wet weather lend a thrilling edge-of-the-continent feel, and with varied vistas, ample roadside wildlife, and miles and miles of wilderness to explore it’s basically a perfect roadtrip destination.

This past winter we went to explore Olympic National Park. Always up to spread our trips out as long as possible, we went down a couple days early to snowshoe Hurricane Ridge, and lingered a bit longer to check out the coast and forests around La Push. Even so it was just a quick trip, a little winter teaser. We’ll definitely want to get down there again soon. 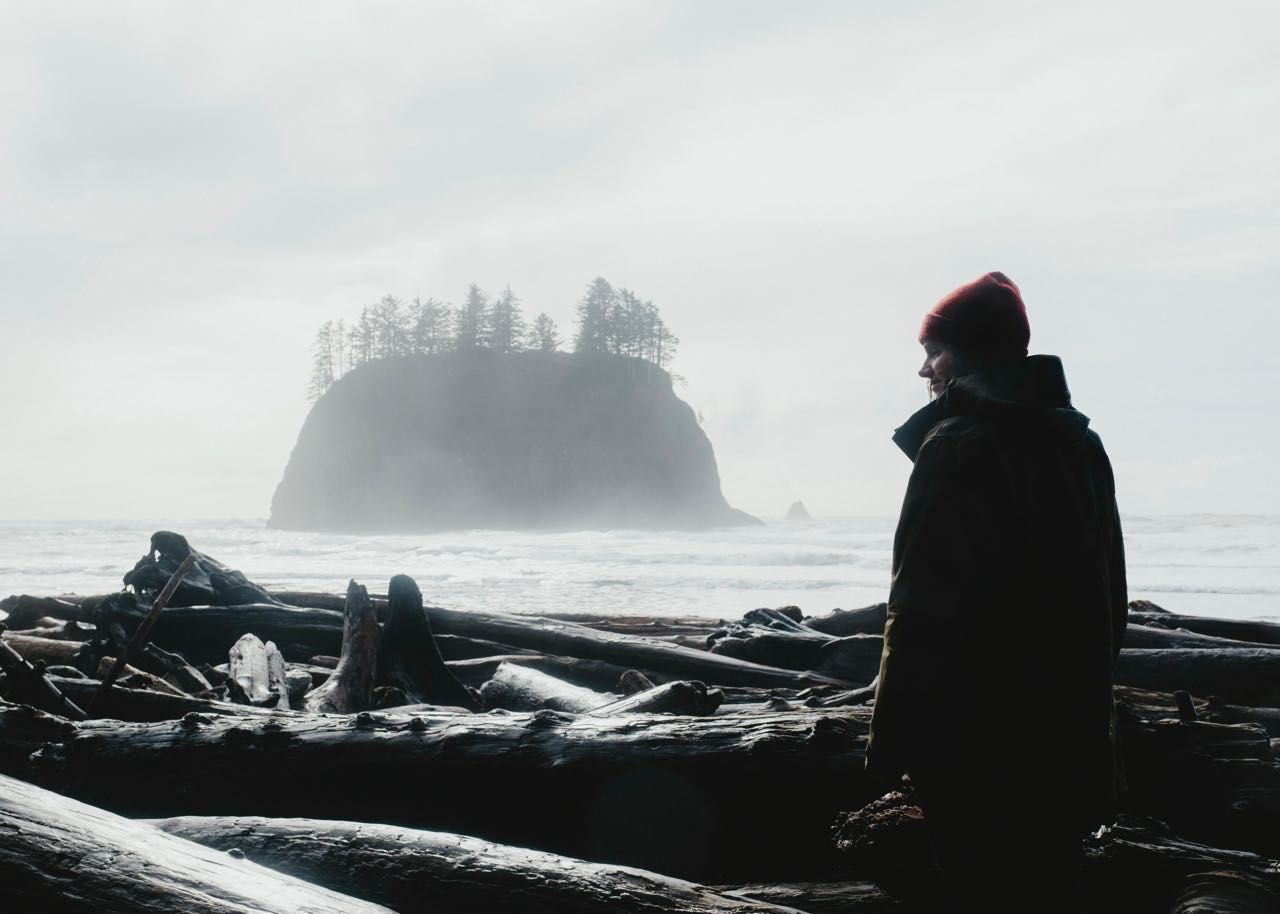 All photos by the authors.

The peninsula is defined by the snow-capped Olympic Mountains, a vast stretch of alpine peaks and deep wild valleys that shape the weather for much of Washington and as far away as BC, too. Most of the Olympics are just untracked wilderness, but of the alpine access points Hurricane Ridge is by far the most well known. Across the valley from Mt Olympus, the ridge affords easy open meadow ambles with magnificent views. 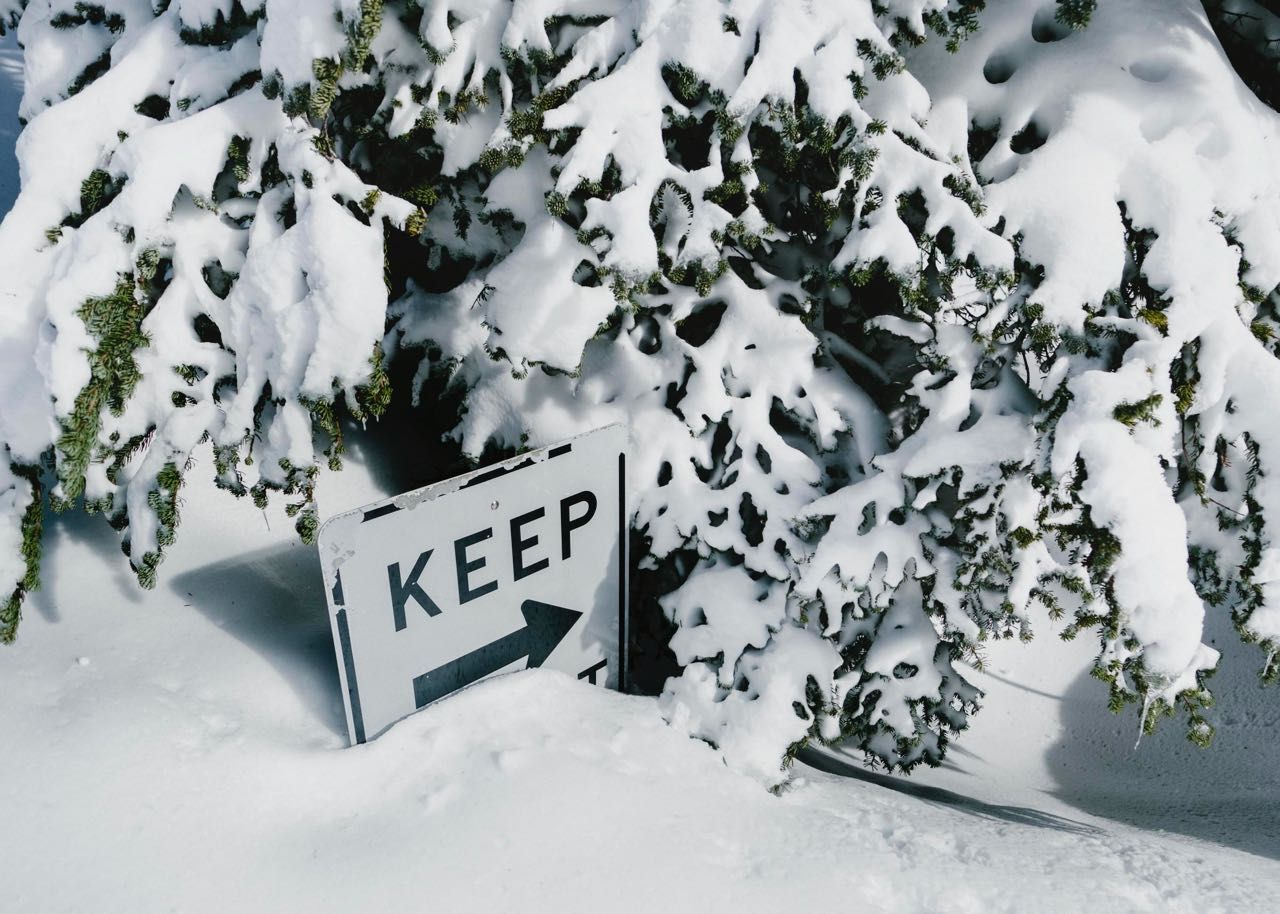 The long winding road into Hurricane Ridge is only open on weekends during the winter, and even with 4WD it’s required that you carry chains in your car. And not without reason — the mountains here are regularly pummelled with deep snow. The Olympic Peninsula is one of the wettest areas on the planet, and much of it falls as snow here in the mountains. As we ascended the snow continued to pile up until it felt like we were driving through sparkling white canyons. 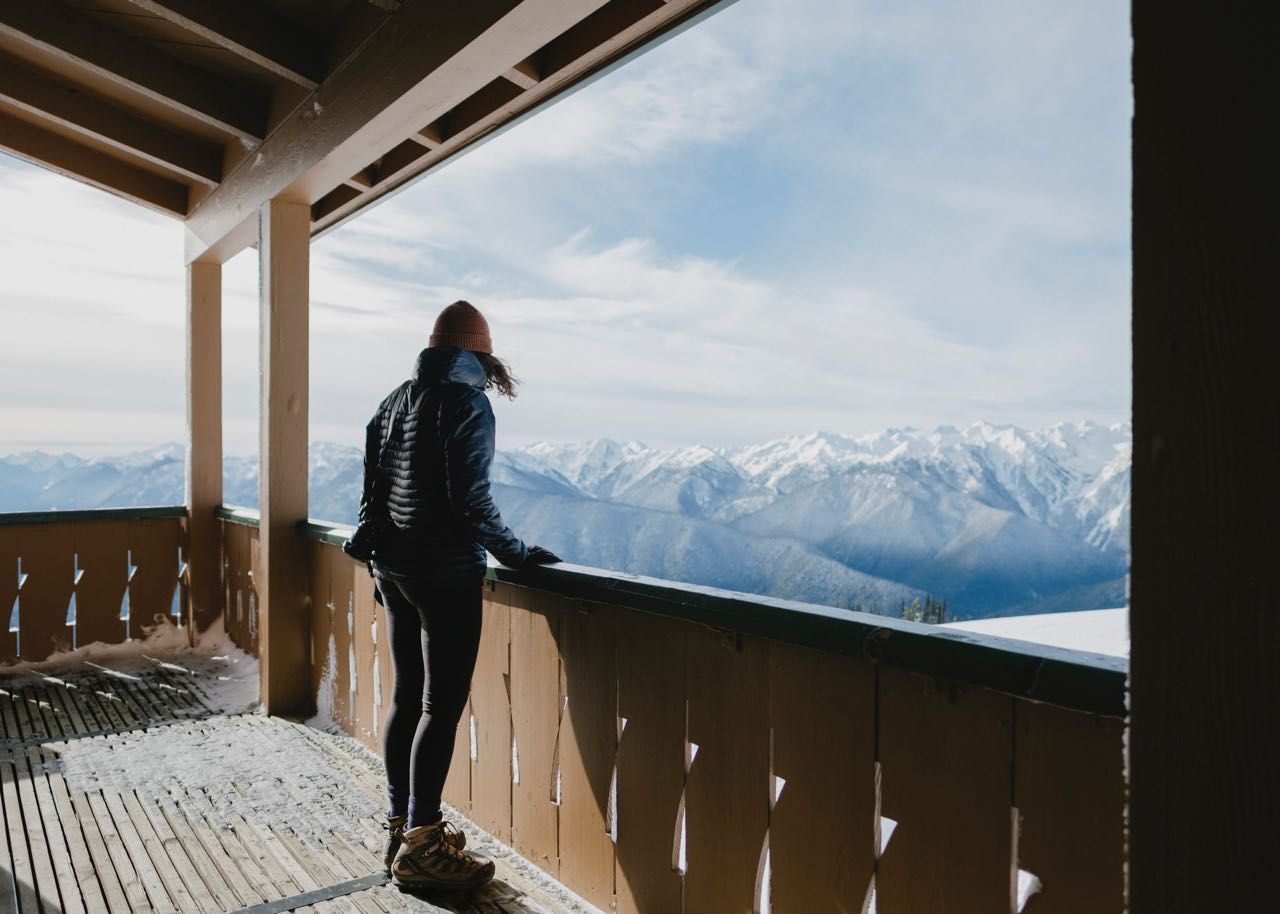 After a quick tour of the lodge we put our snowshoes on and made our way out to the ridge. 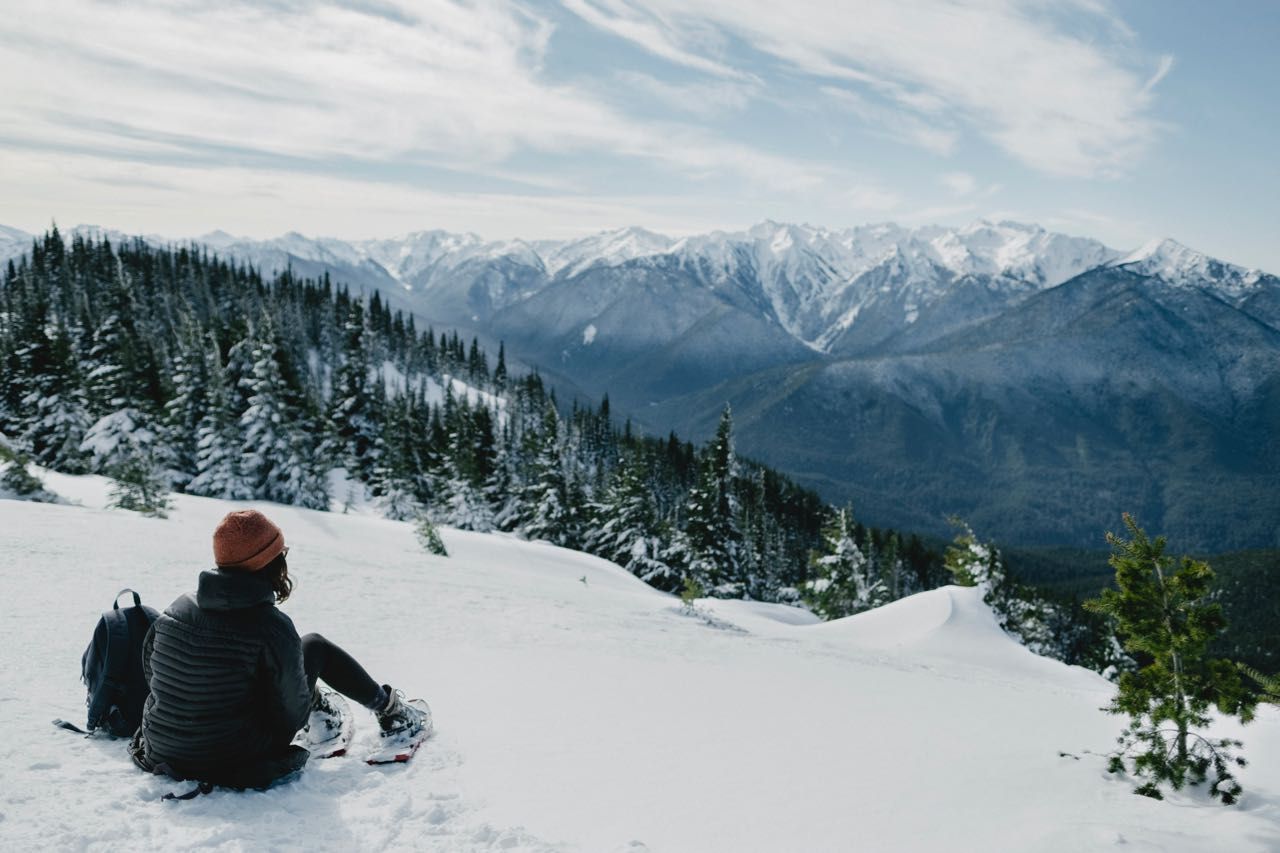 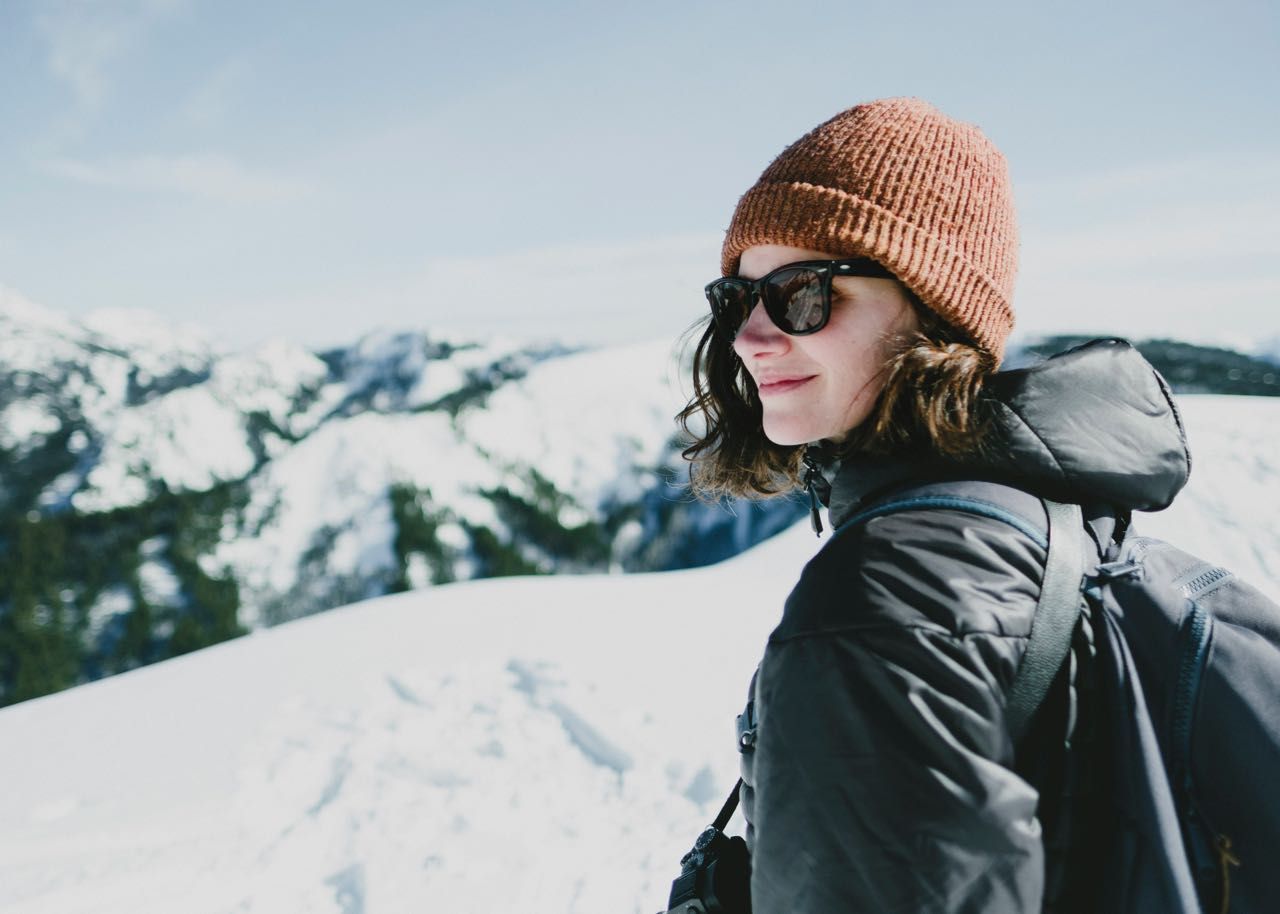 Driving out to the west coast, we emerged from the forest just in time for a stunning sunset on Ruby Beach. Thick with ocean mist, the beach has interesting seastacks and sweeping views of endless pacific waves. The most northern of the southern section of beaches, it’s one of the most-visited areas in the park. And it was easy to see why. 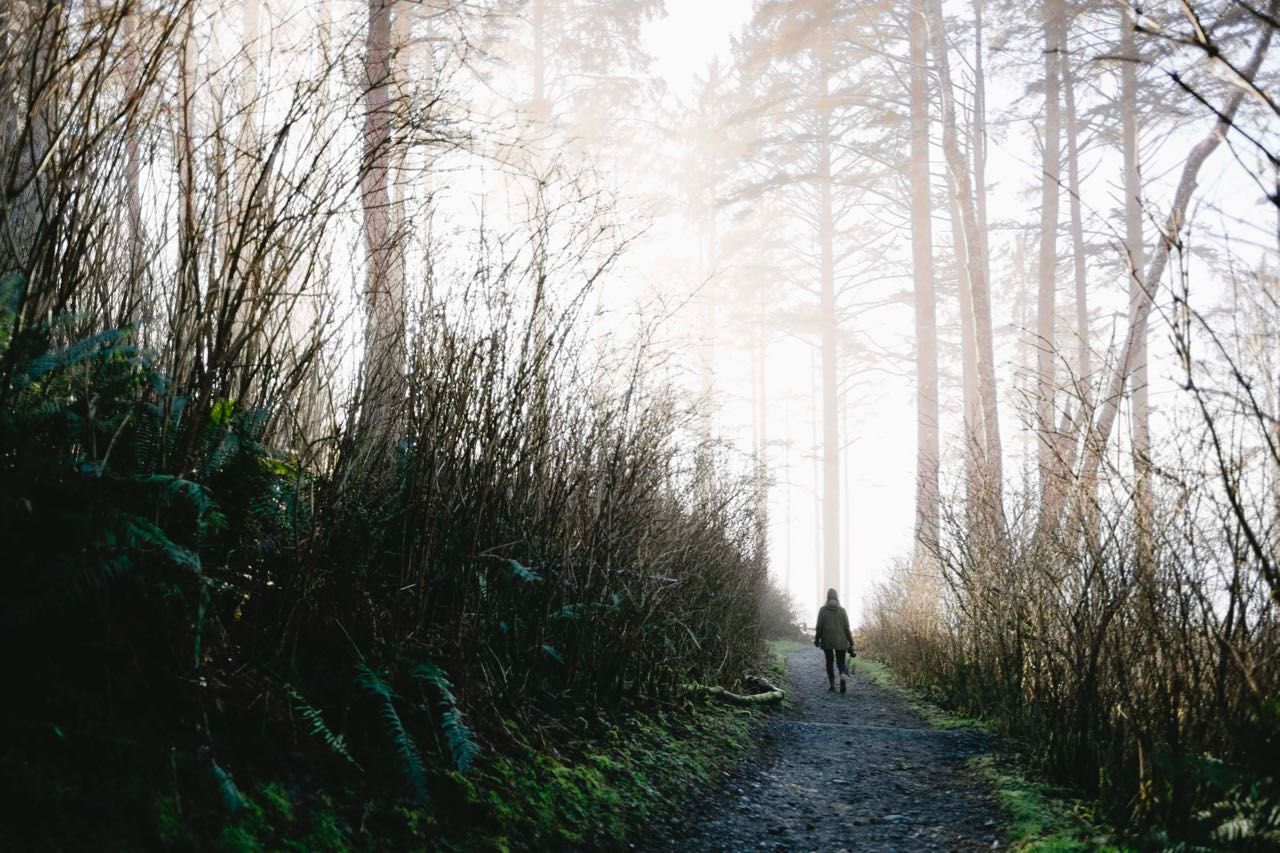 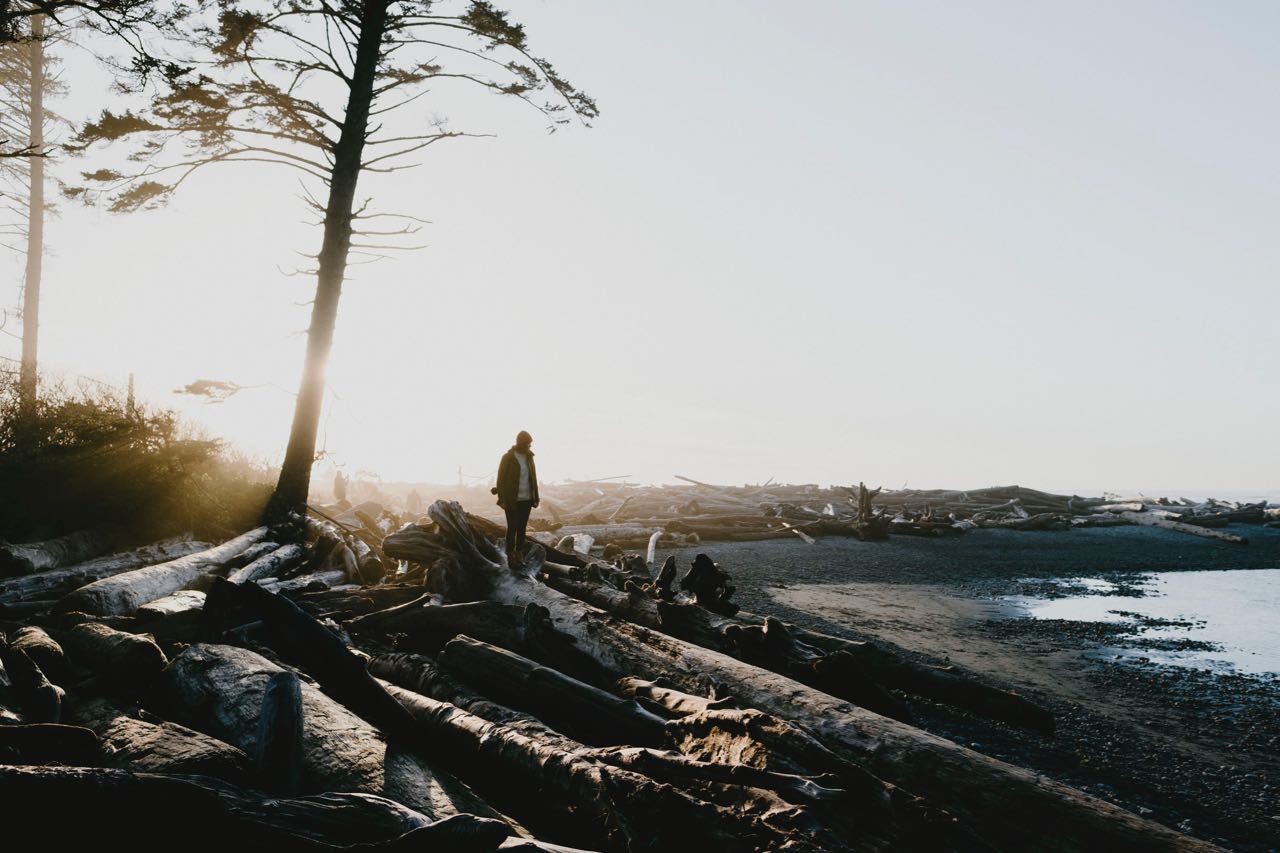 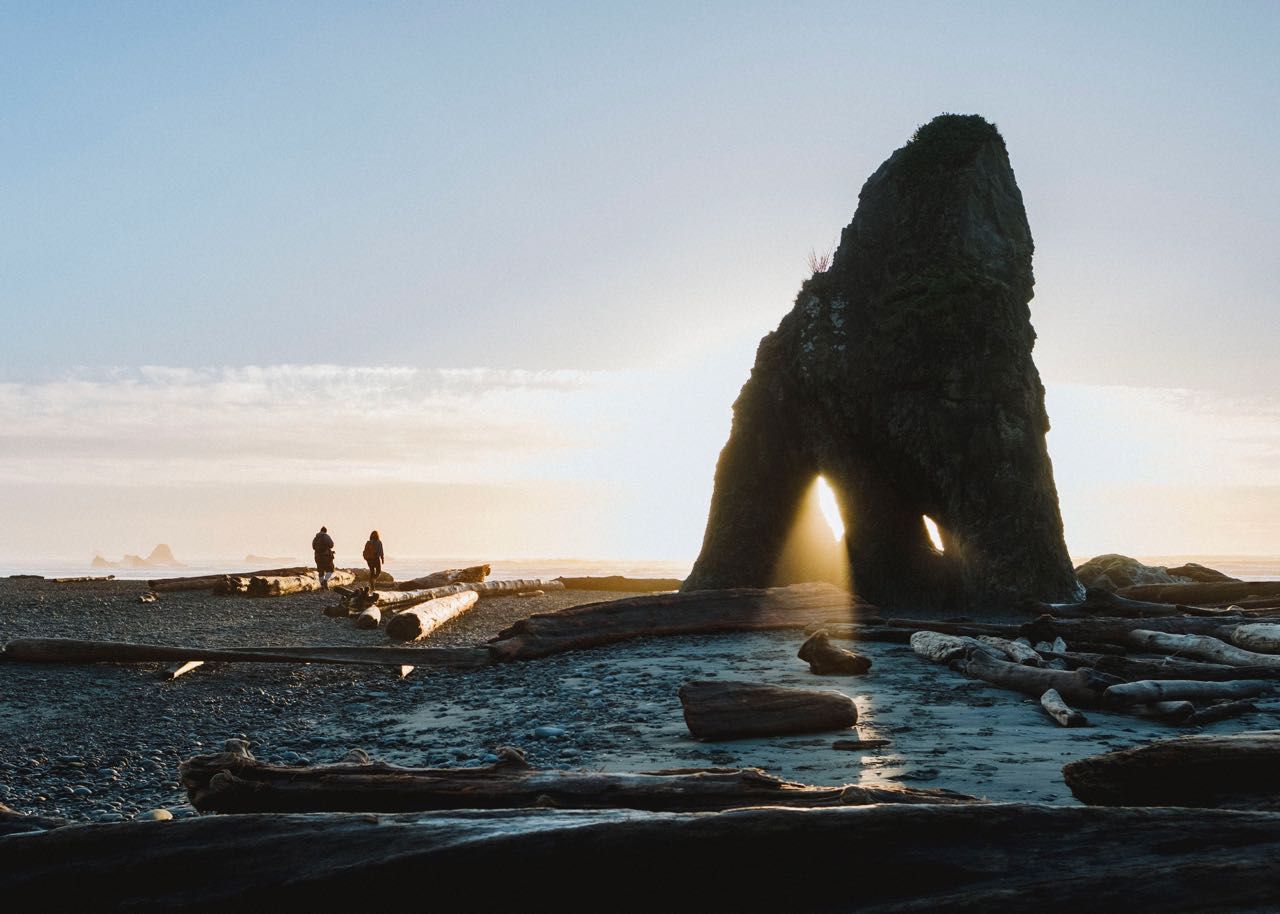 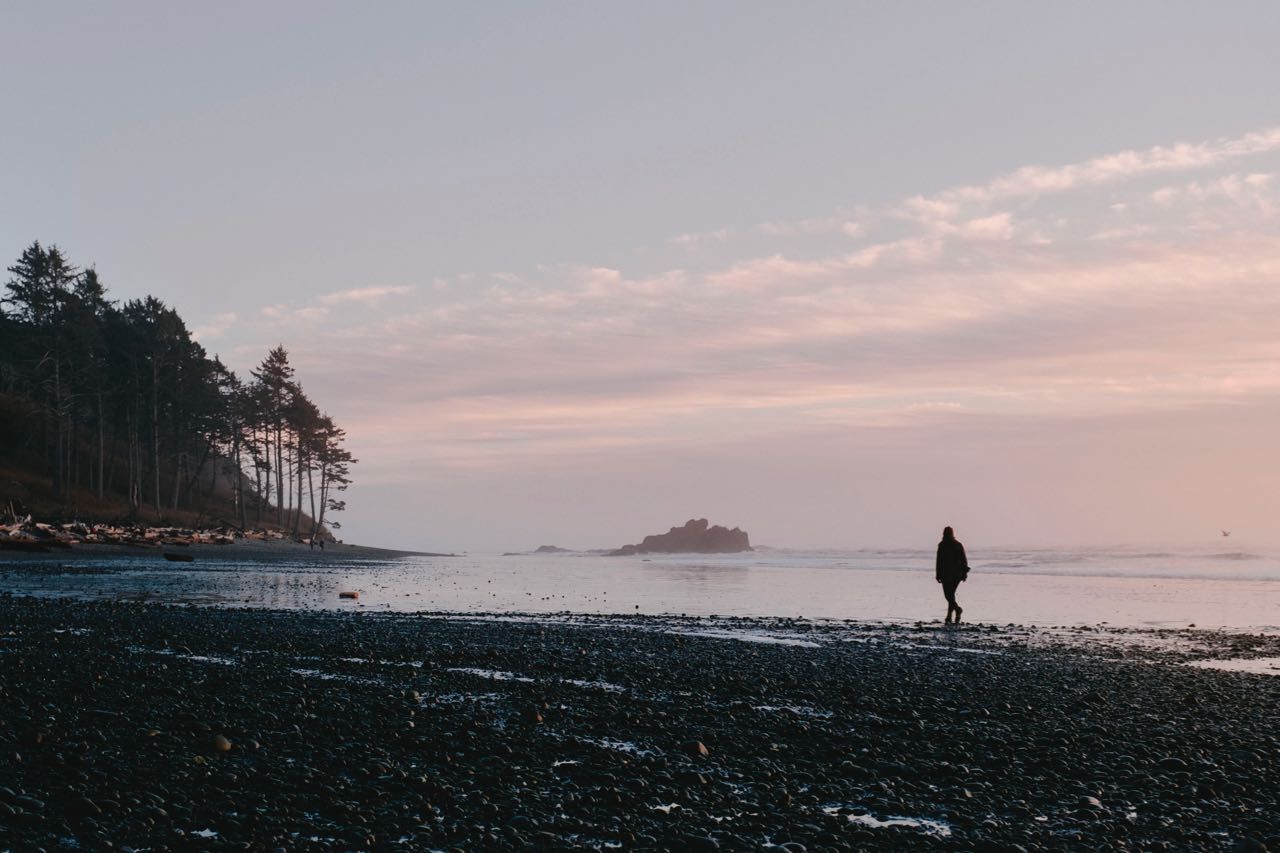 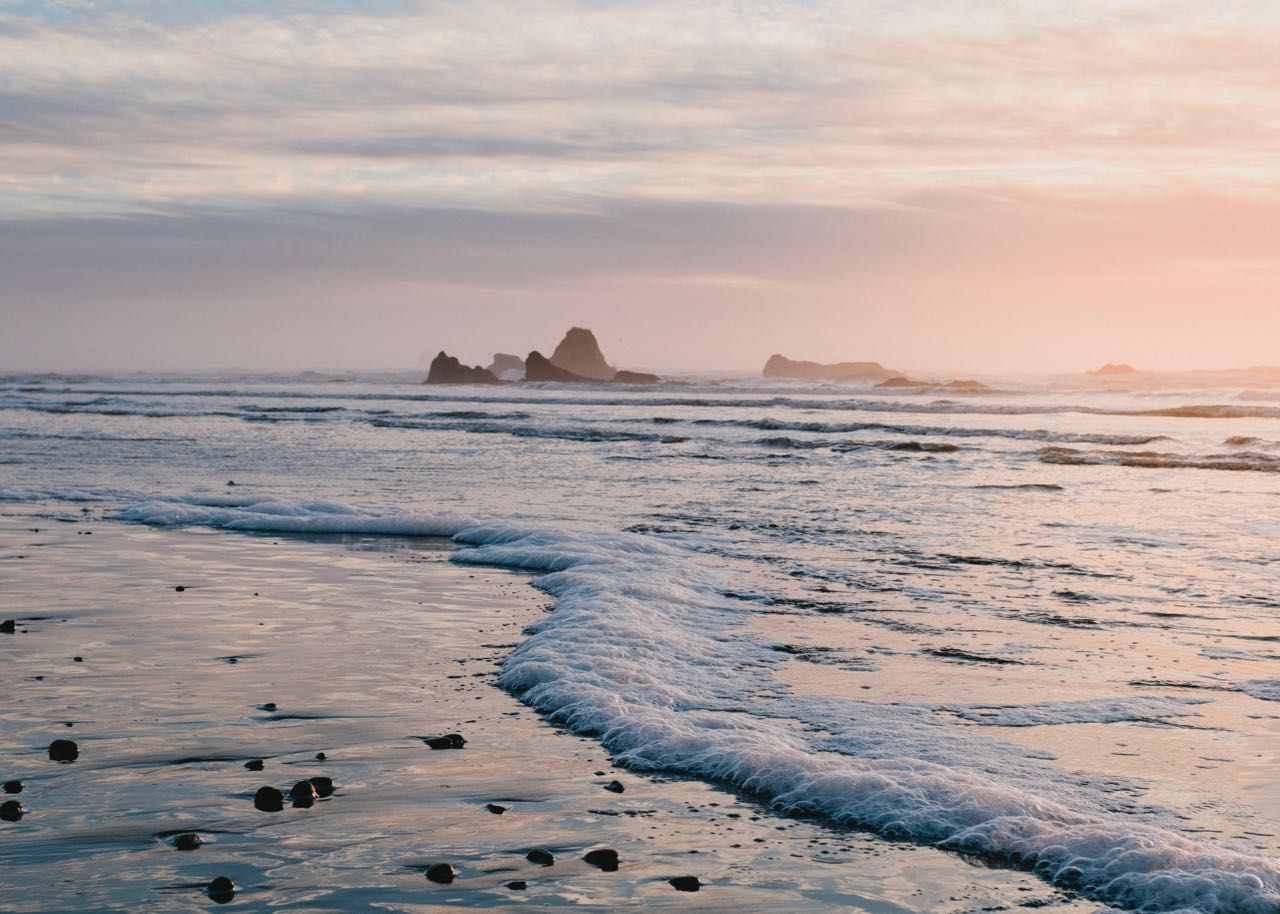 Just south of Ruby Beach is the Kalaloch Lodge. Located on a bluff overlooking a large sandy beach and without cellular reception or internet, the rustic cabins are a perfect getaway to unwind and experience the wild west coast. Or even just settle in with a book or catch up on some schoolwork. 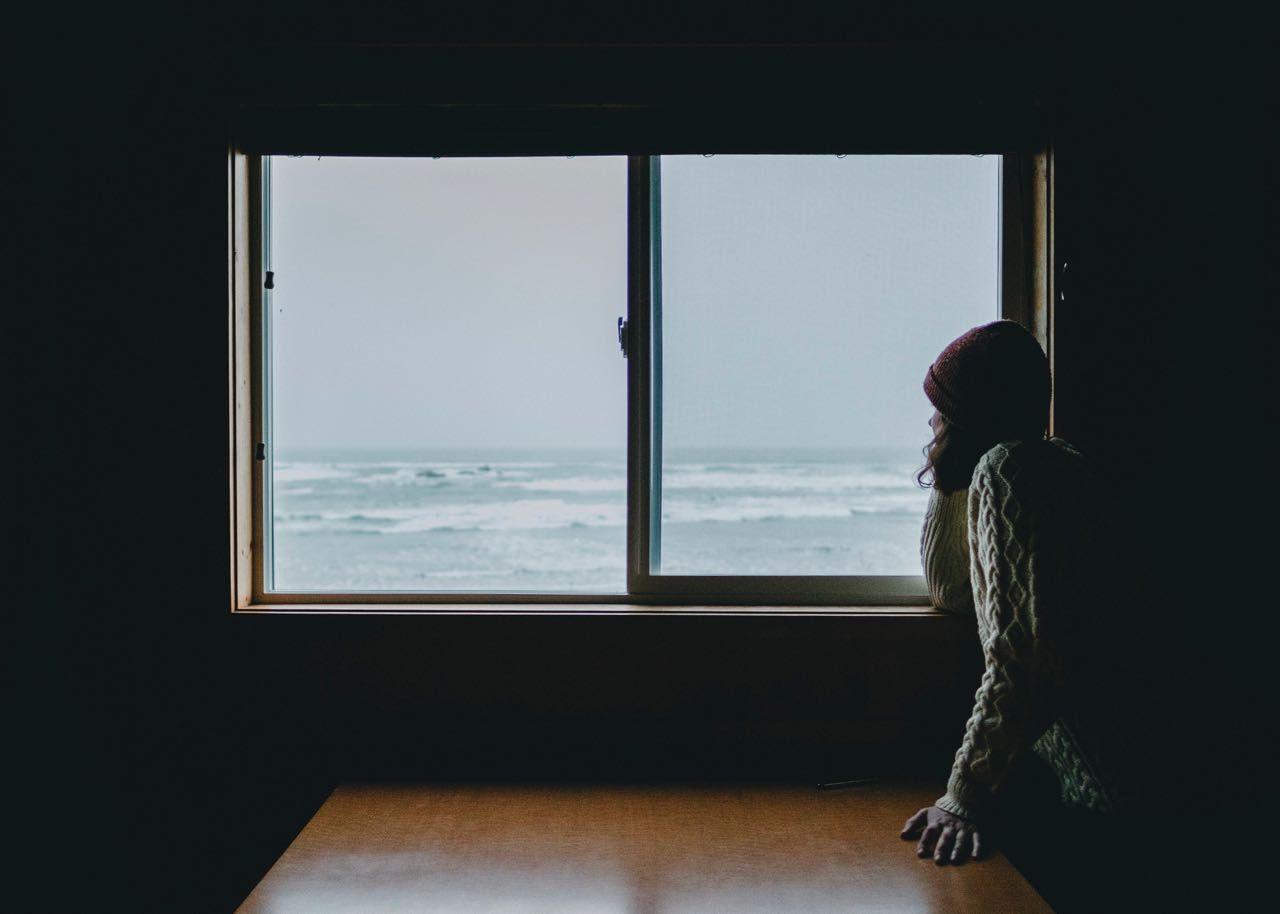 The original lodge and cabins were built in 1925, and purchased by the National Park Service in 1978 after the park expanded to include more coastline. With a great restaurant and a little store, we were thrilled to make it our home for a couple days. 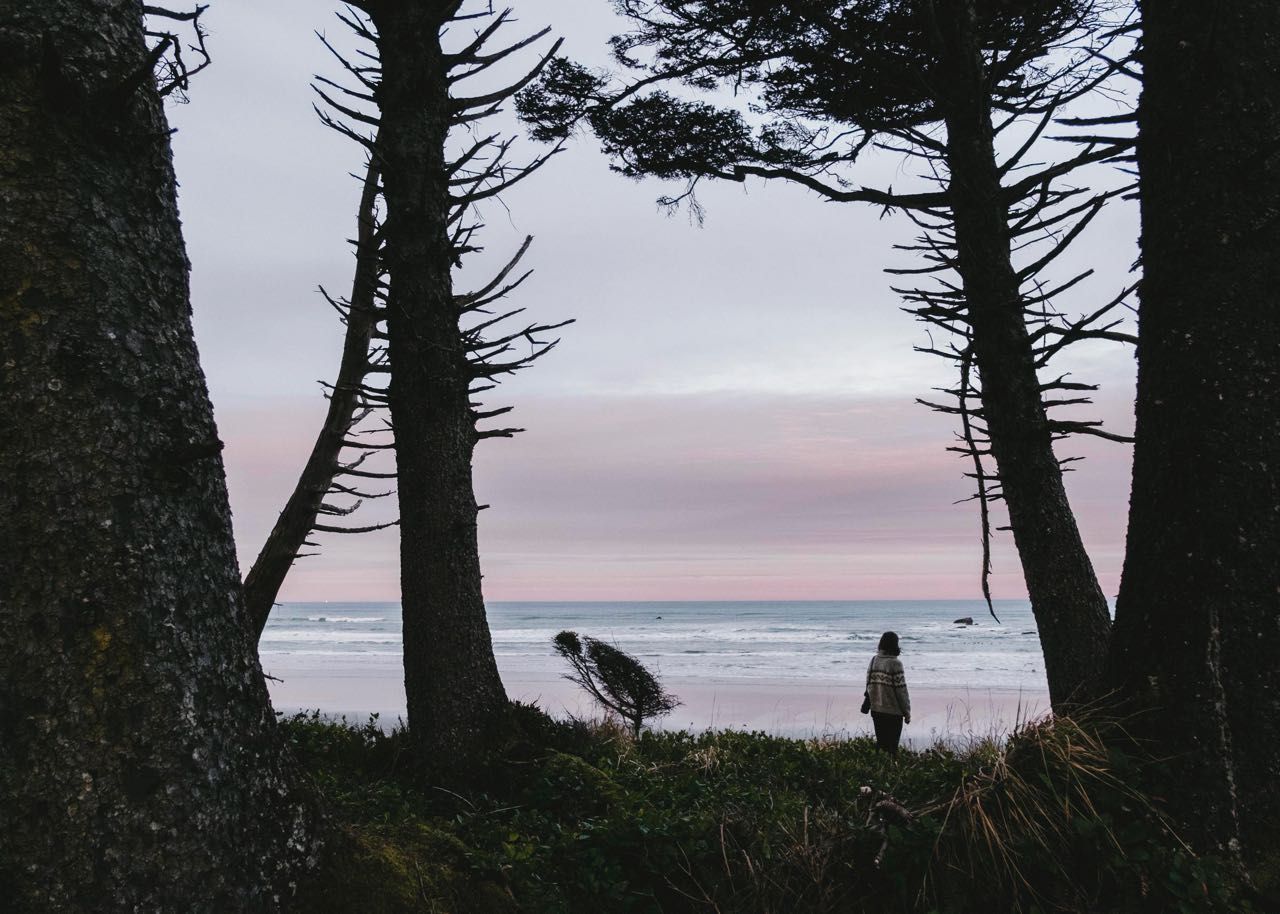 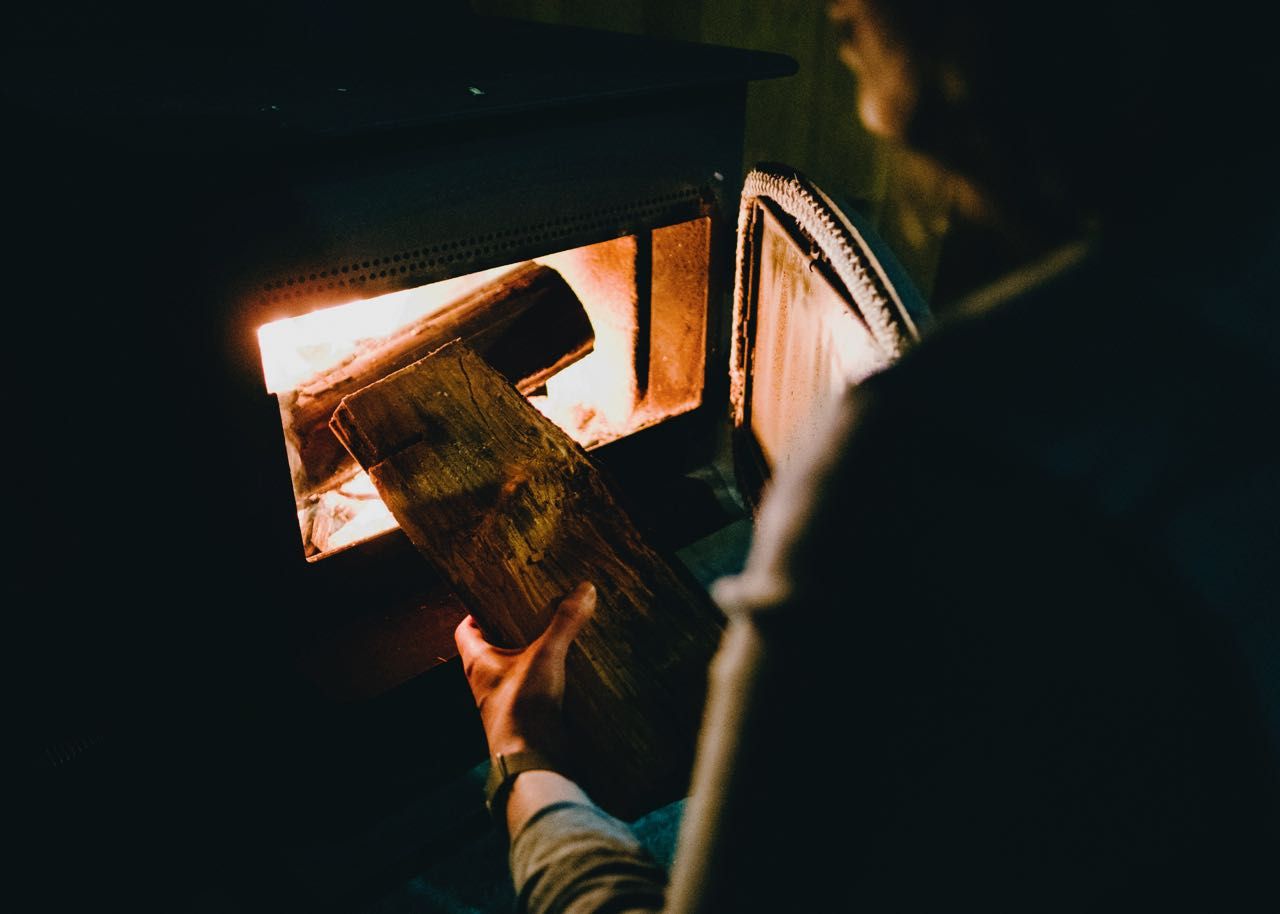 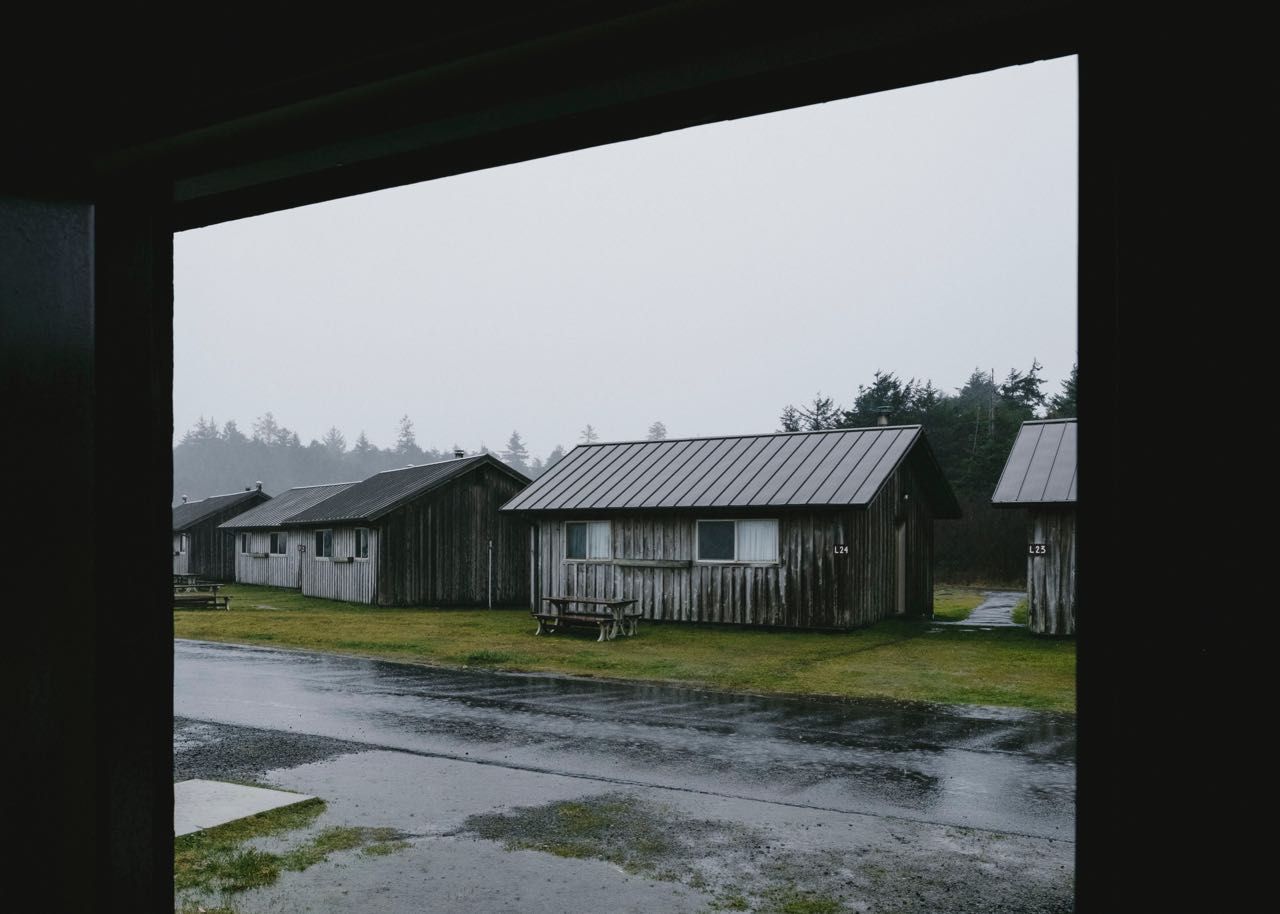 Waking up to a downpour, we figured it was the perfect time to head out to the rainforest. At one time there were vast stretches of old growth forests stretching from Alaska to central California, but a century of logging has taken its toll. Olympic National Park was established in part to preserve some of these ancient forests, and the park now has one of the largest reserves of temperate rainforest left in the US. With massive sitka spruce, western hemlock, and moss-draped bigleaf maple, strolling through the woods feels like stepping back in time. 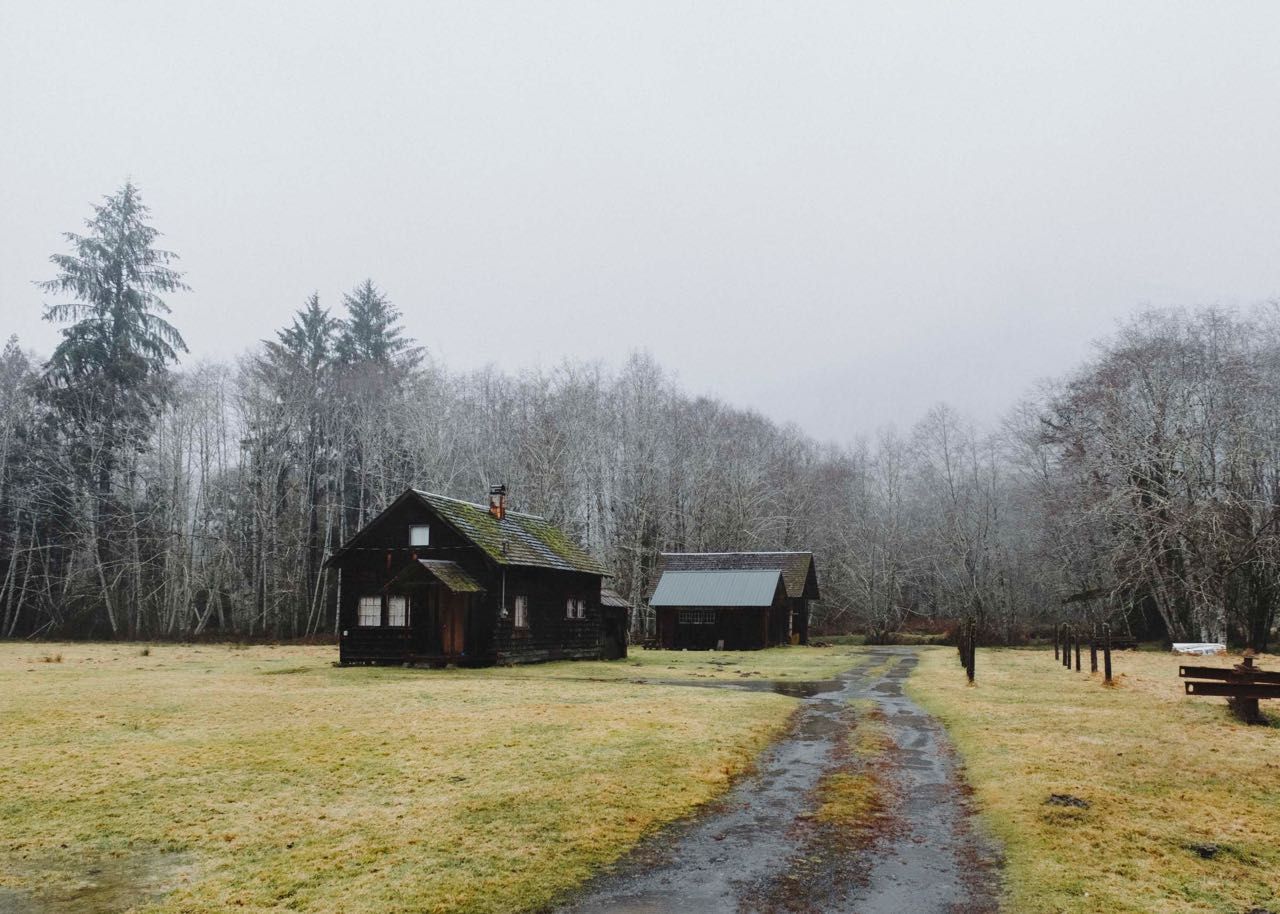 We took a walk through the Hall of Mosses, where thick curtains of moss and lichen hang from labyrinthine branches. With annual rainfall of up to 14ft, the valley is green even in the winter months — but I can only imagine how lush and vibrant it must be in spring and summer, when the forest floor and massive maples erupt in fresh new growth. Hopefully we can come back again soon. 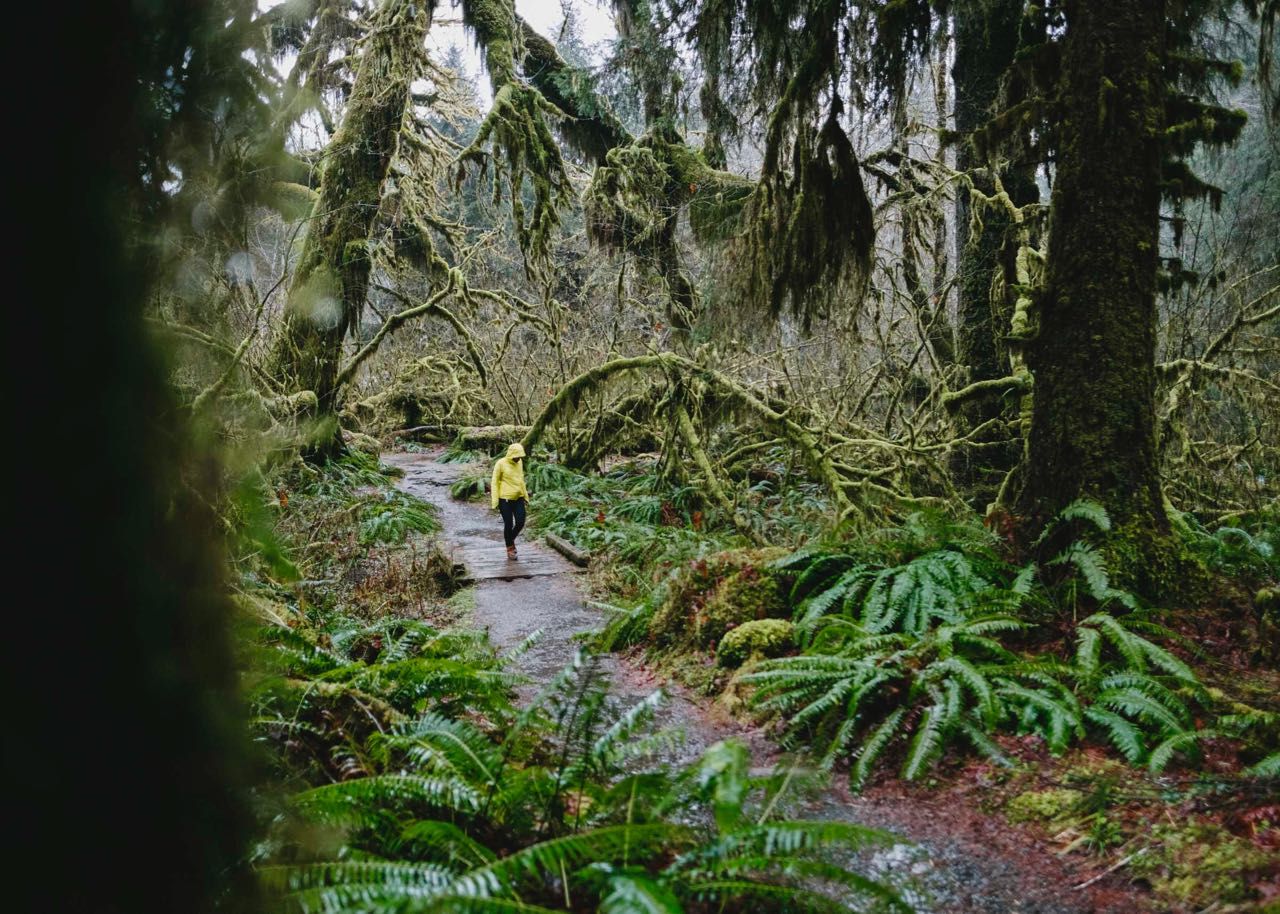 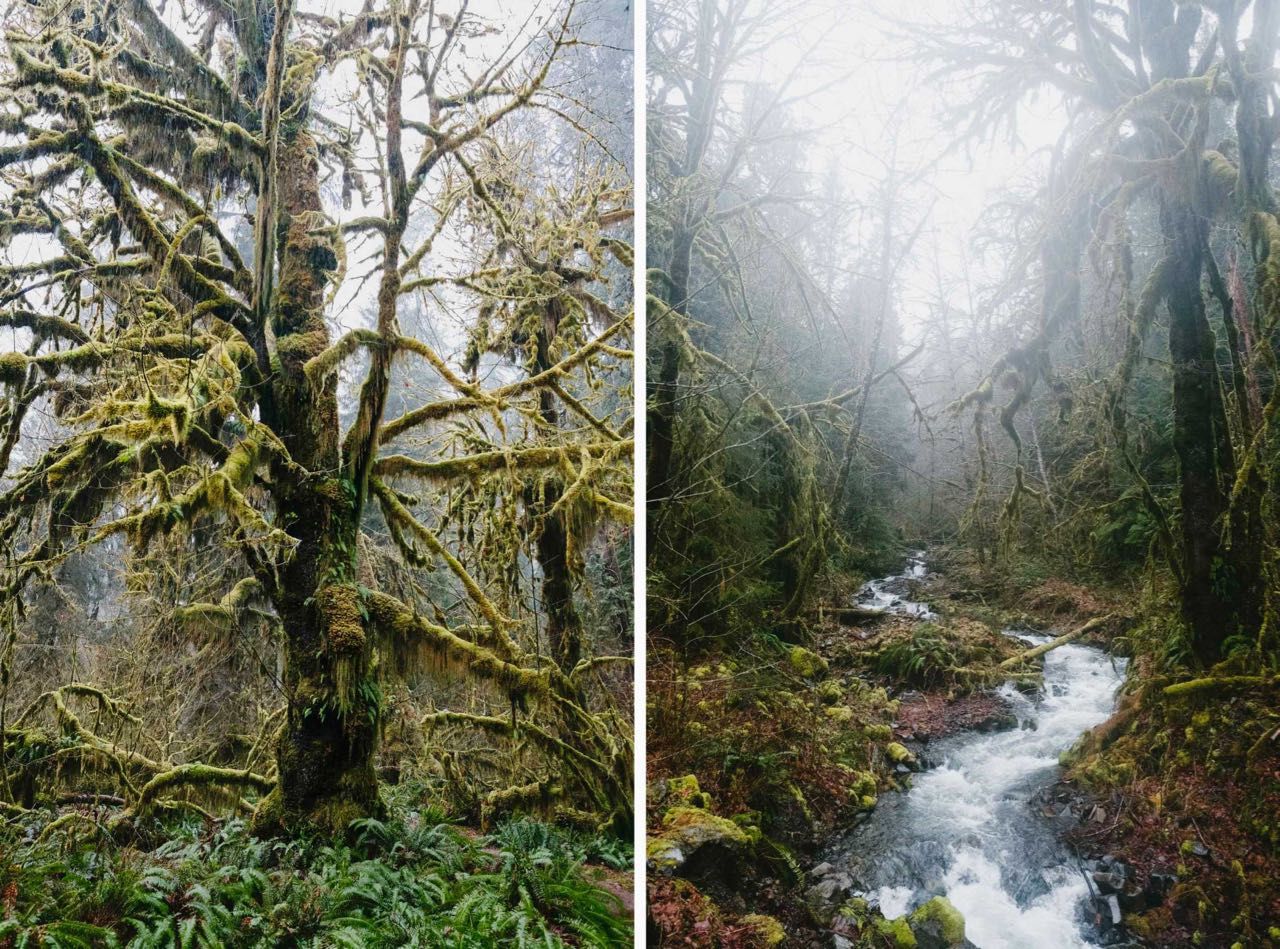 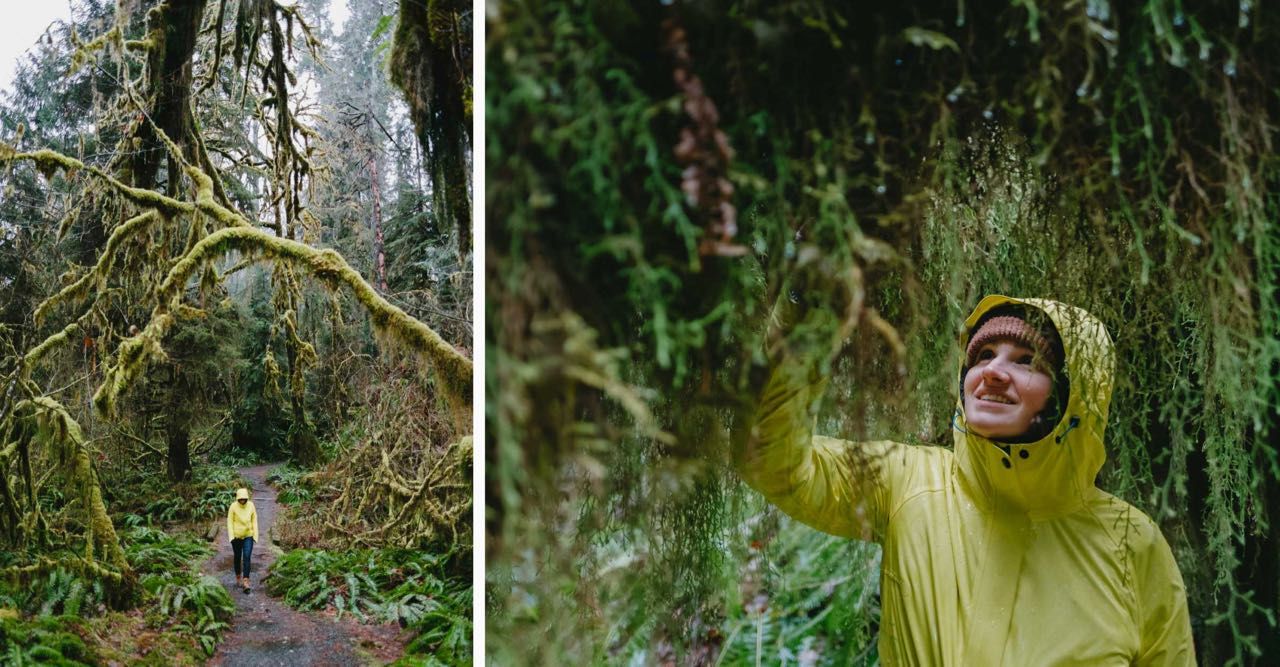 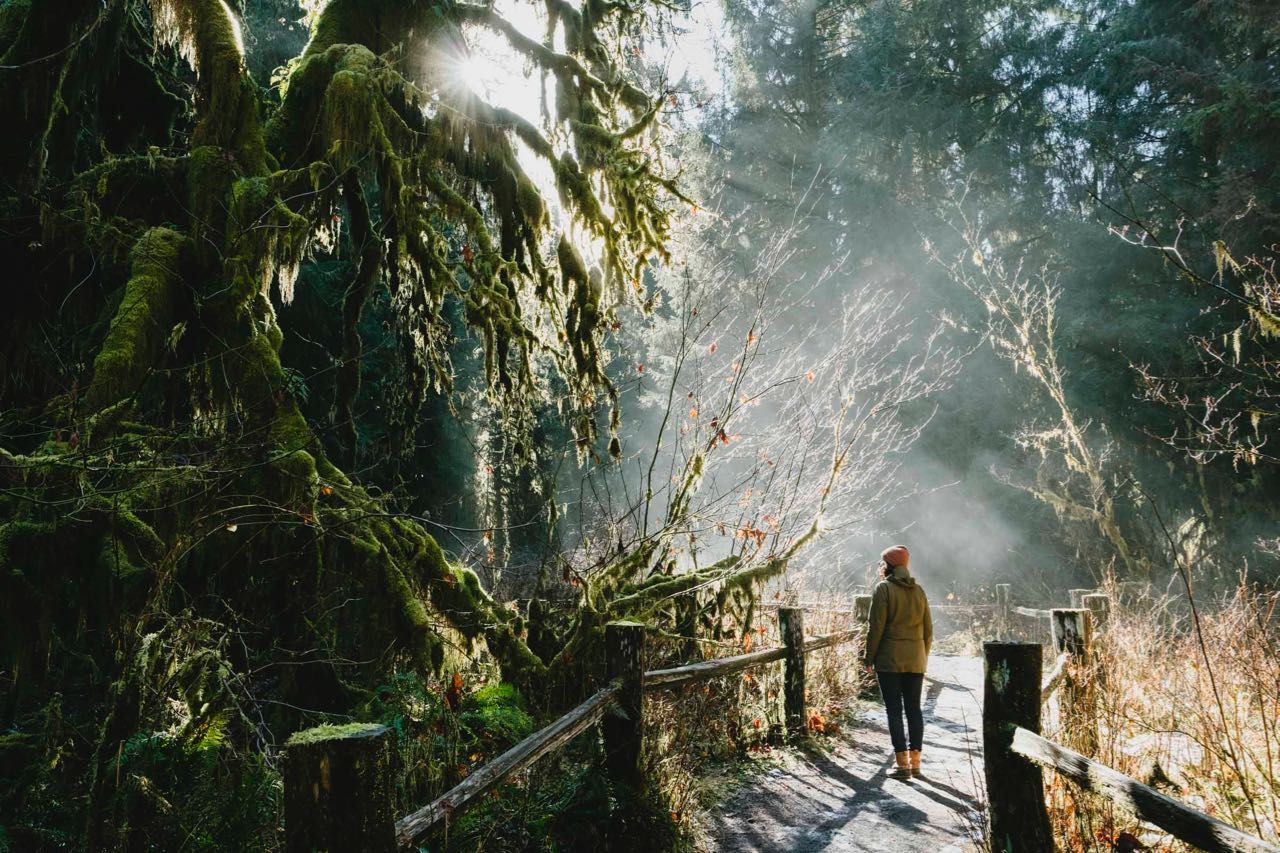 Of all the beautiful beaches on Washington’s west coast, the area around La Push might be the most magical. With three beaches to explore, massive sea stacks, piles of driftwood, and dark foggy fern-lined forests, this is quintessential PNW. 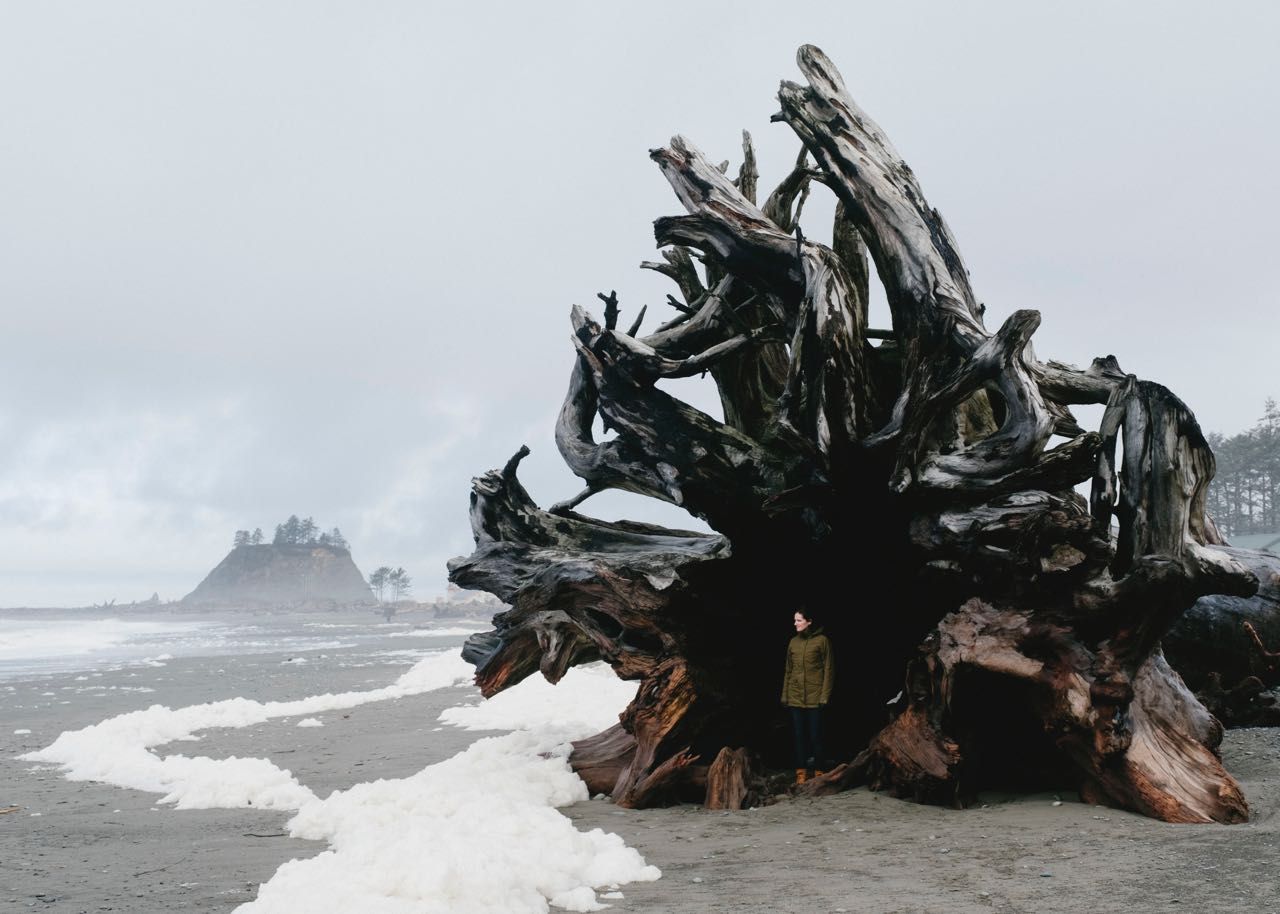 Our plan was to hike down and camp on Second Beach, but after a day of unending rain a car-quaking windstorm began whipping up by evening. Branches were falling and rain was screaming in sideways, so we opted instead to take a cozy little cabin at Quileute Oceanside Resort. Located on First Beach, we lit a little warming blaze in the fireplace, then fell asleep listening to the howling wind and rain lashing against the windows. 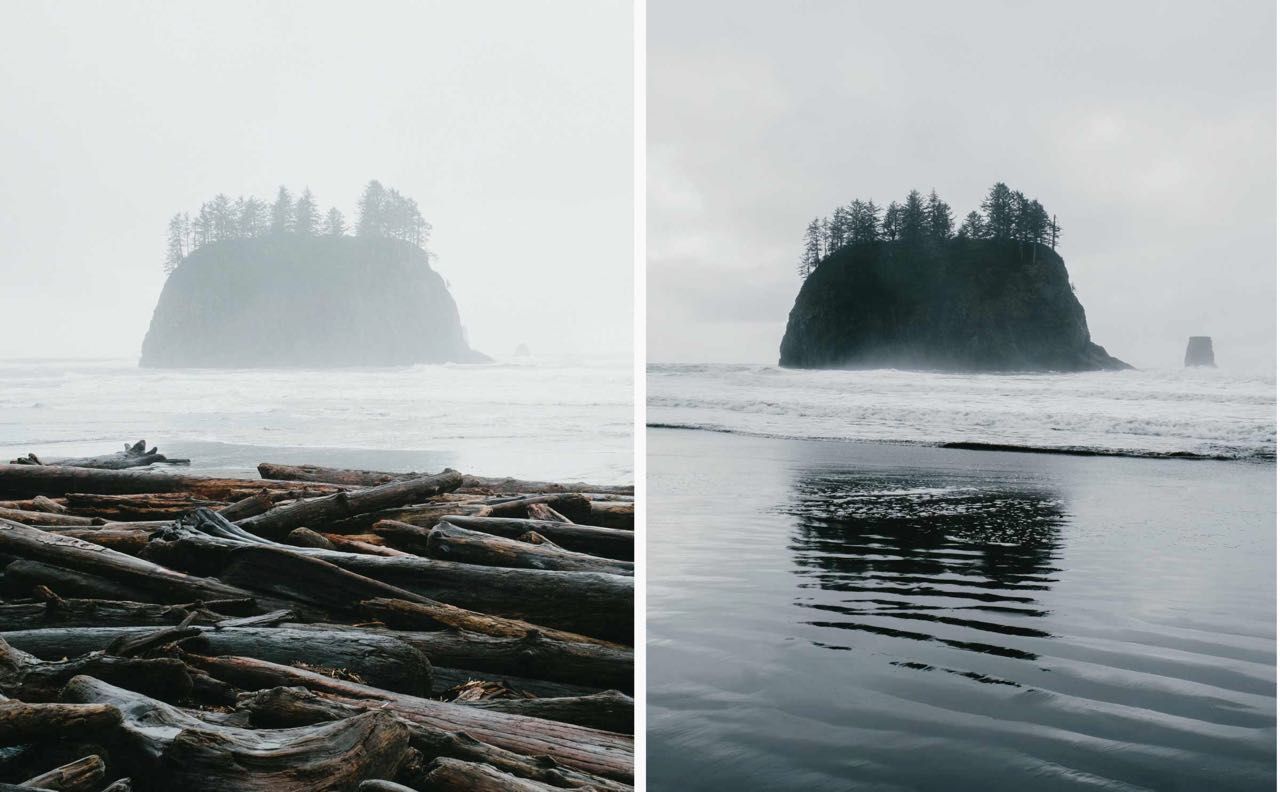 I woke up with a start — it was still inky black outside, but it was unexpectedly, eerily, quiet. The storm had passed. By morning, the day was promising sun! We emerged from the cabin and went out to see the beach. 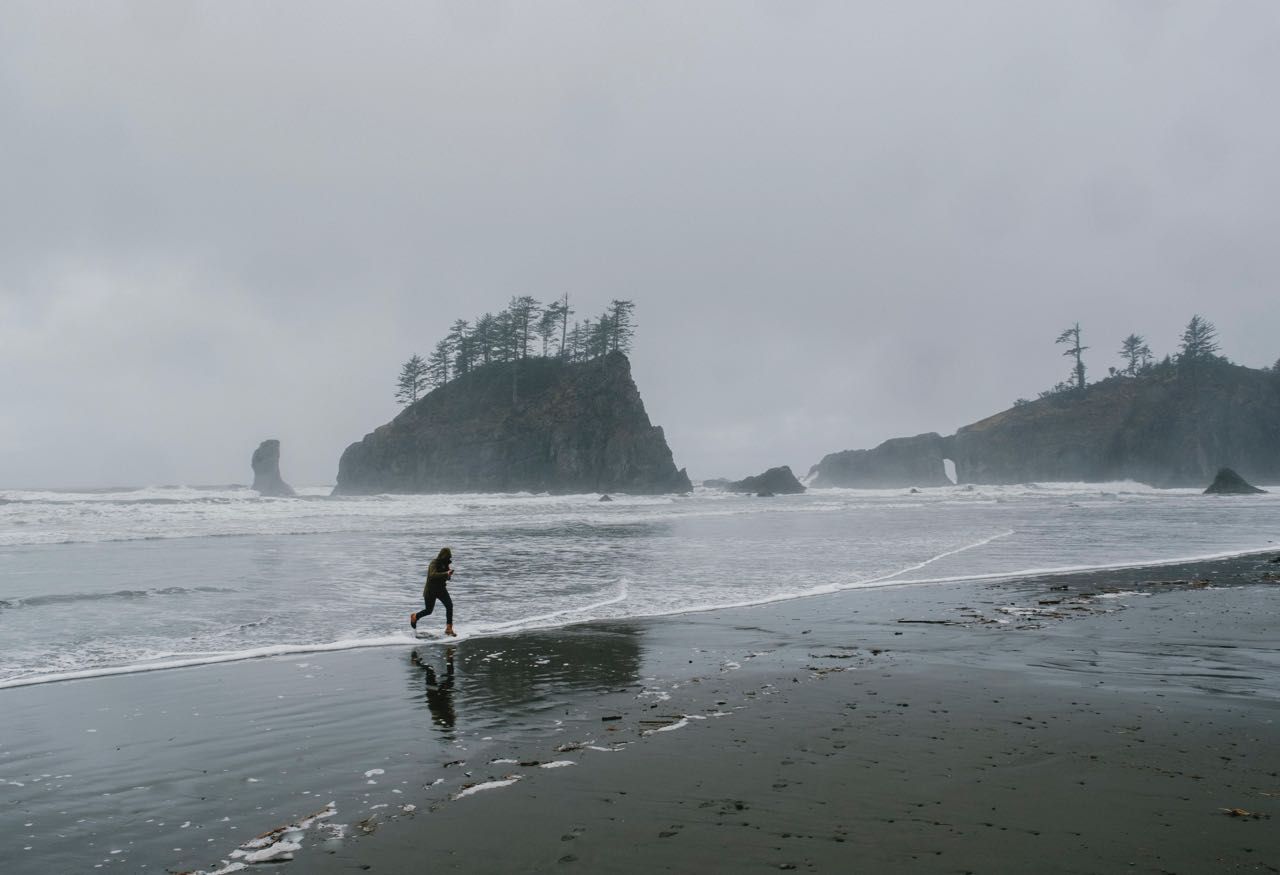 But our time here was limited. Megan had a ton of schoolwork and studying waiting for her at home, and we’d soon have to start thinking about heading back. But not before seeing Second Beach. Only a couple minutes out of town, the trailhead to Second Beach marks the start of a 10-15 minute walk through the woods down to the coast. Emerging from the forest, we were greeted by a large picturesque seastack and a renewed round of rain. The weather changed every few minutes from spotty sun to brooding to pelting walls of wetness. We didn’t stay too long, but the power of this place is unforgettable. 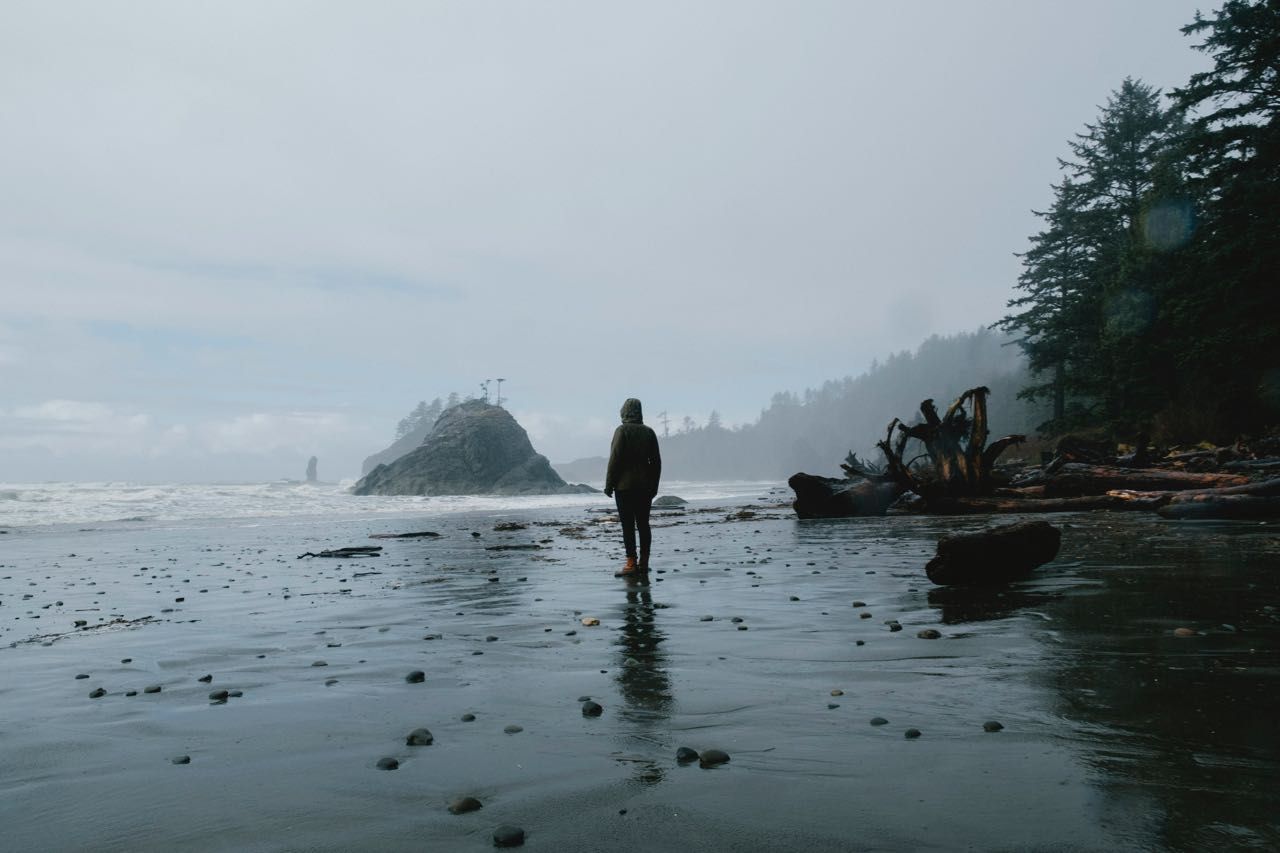 It’s a long drive back to Canada, and the shortest routes both involve a ferry. We only barely caught ours, arriving in Port Townsend just as the previous sailing’s cars finished offloading. Disembarking on Whidbey Island, we cooked up some pasta, took one last look back over the water, then hopped in our car, eyes set on the border. 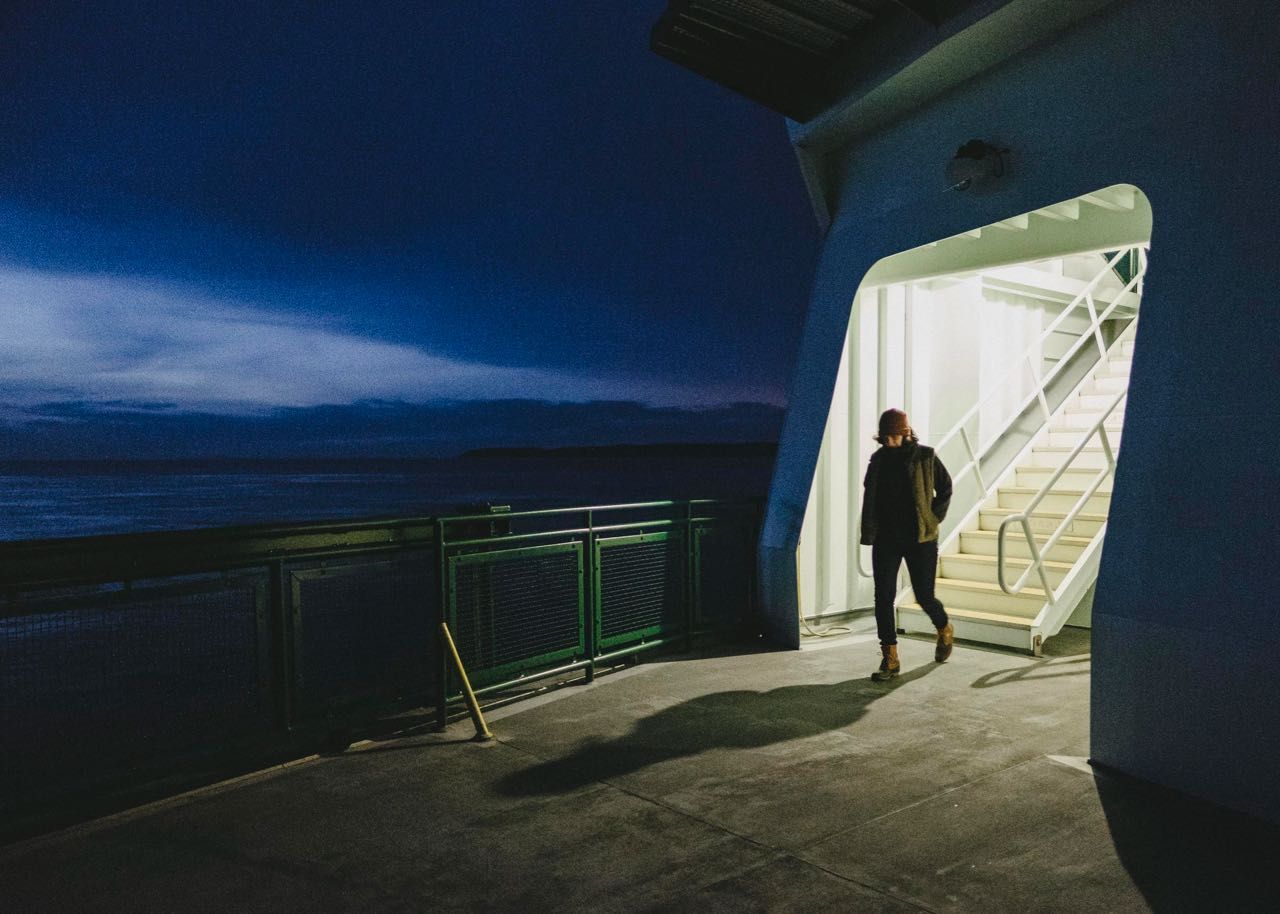 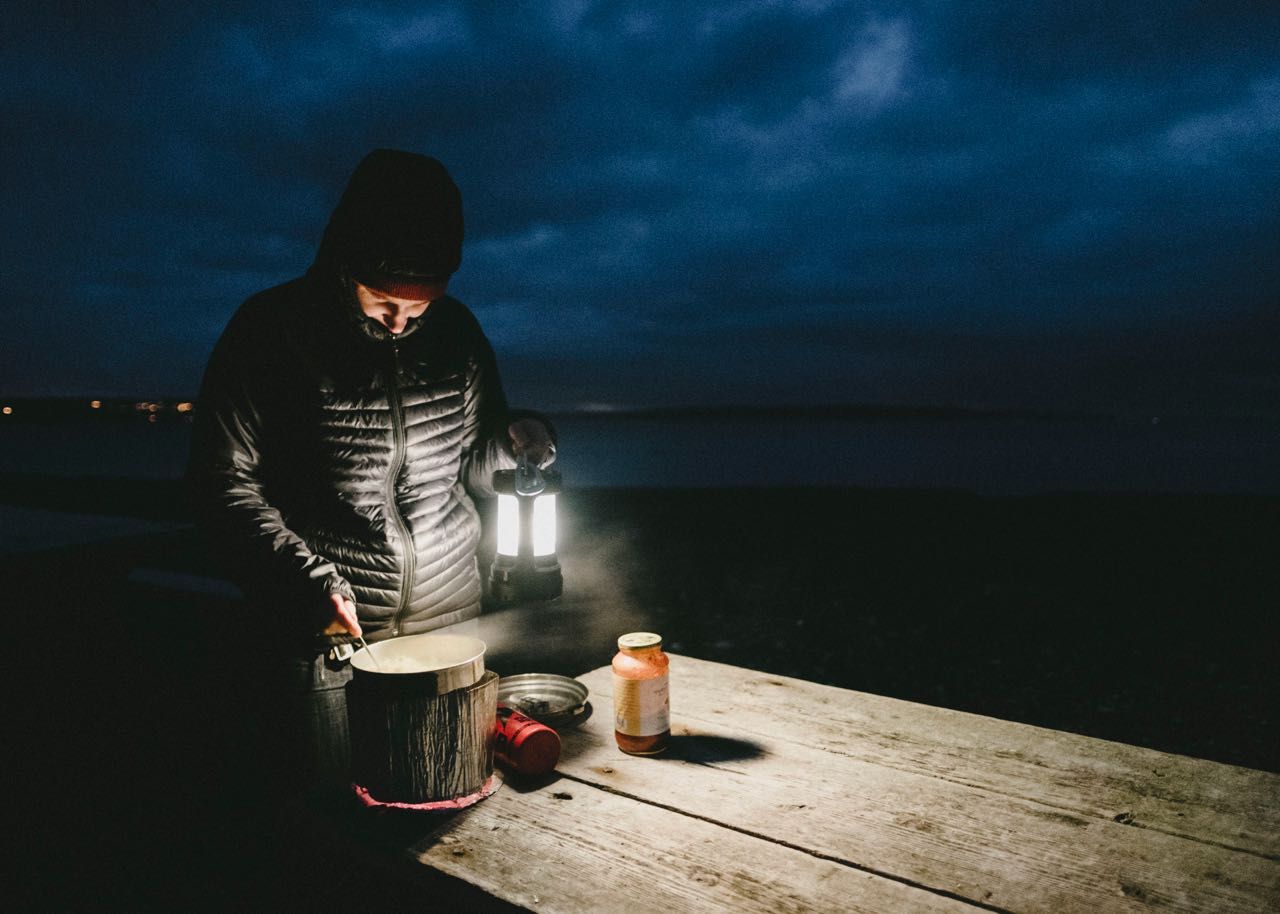 This article was originally published on Field & Forest and is republished here with permission.

Tagged
Washington, United States
What did you think of this story?
Meh
Good
Awesome

Skip Marfa for These True Small Town Texas Experiences
The Ultimate Food Tour of New Haven, the Birthplace of American Pizza
This Historic Castle Distillery Is the Best Place To Drink in Kentucky Bourbon Country
The Truth About Artificial Vanilla Extract (and Why You Should Always Splurge for Pure)
Watch: Here’s Why Campfire Smoke Always Blows in Your Face

The Best Day Trips for Hiking and Beer in Washington State