ALASKA still feels wild; it remains humbling, diverse, and generally inaccessible. Mountains tower up out of the ocean, glaciers carve across the landscape, weather is unpredictable, and roads are few and often in rough shape.

Alaska has an overwhelming sense of remoteness, coupled with a powerful proximity to wildlife. This world is shared with a vibrant ecosystem, headlined by some of the largest, most majestic mammals on earth. Alaska is perhaps my favorite place, a rare place where nature is still at full work, preserved in a unique way. We wanted to tap into the remoteness of this raw country, find ways to explore the corners and crevasses of this very special place. 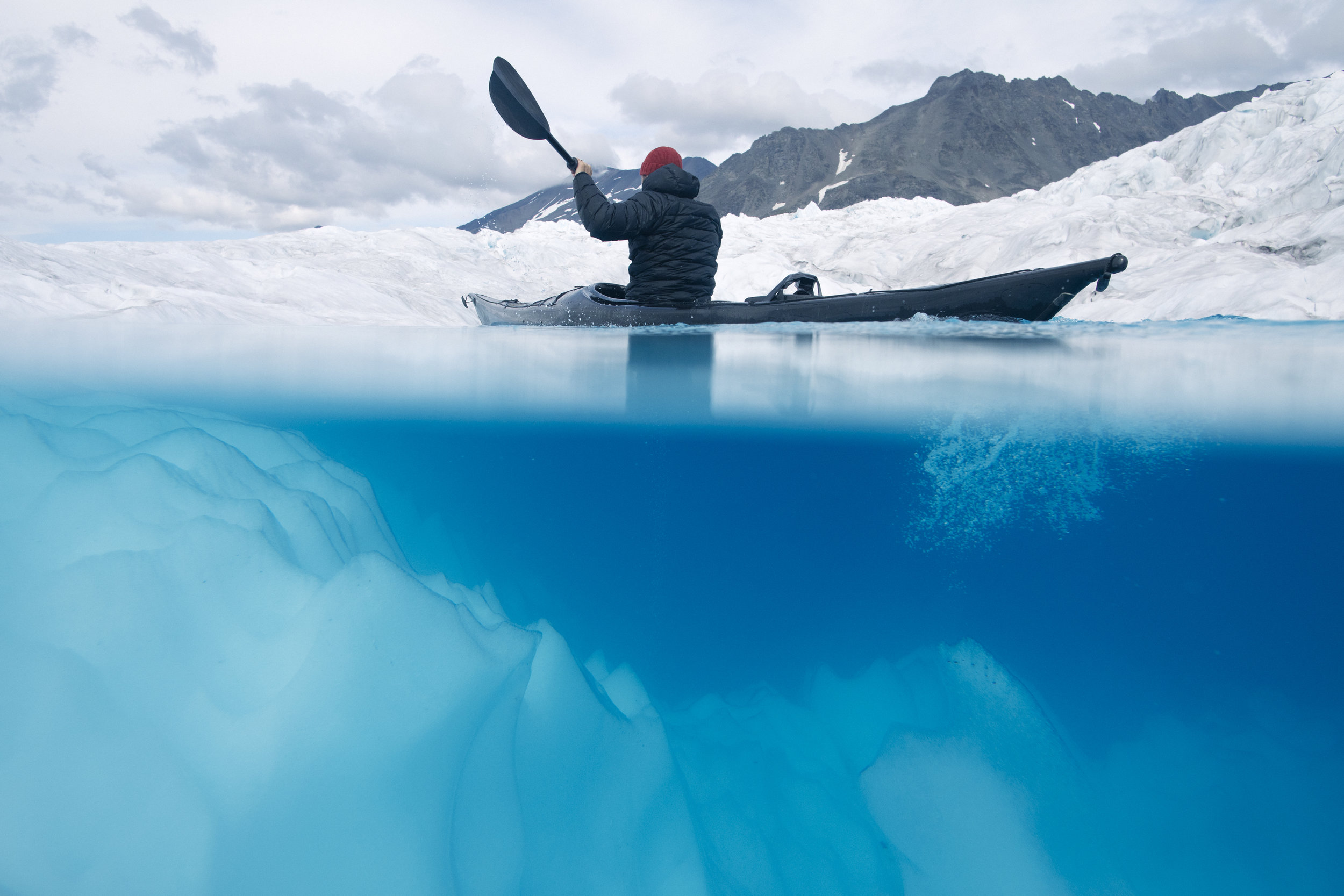 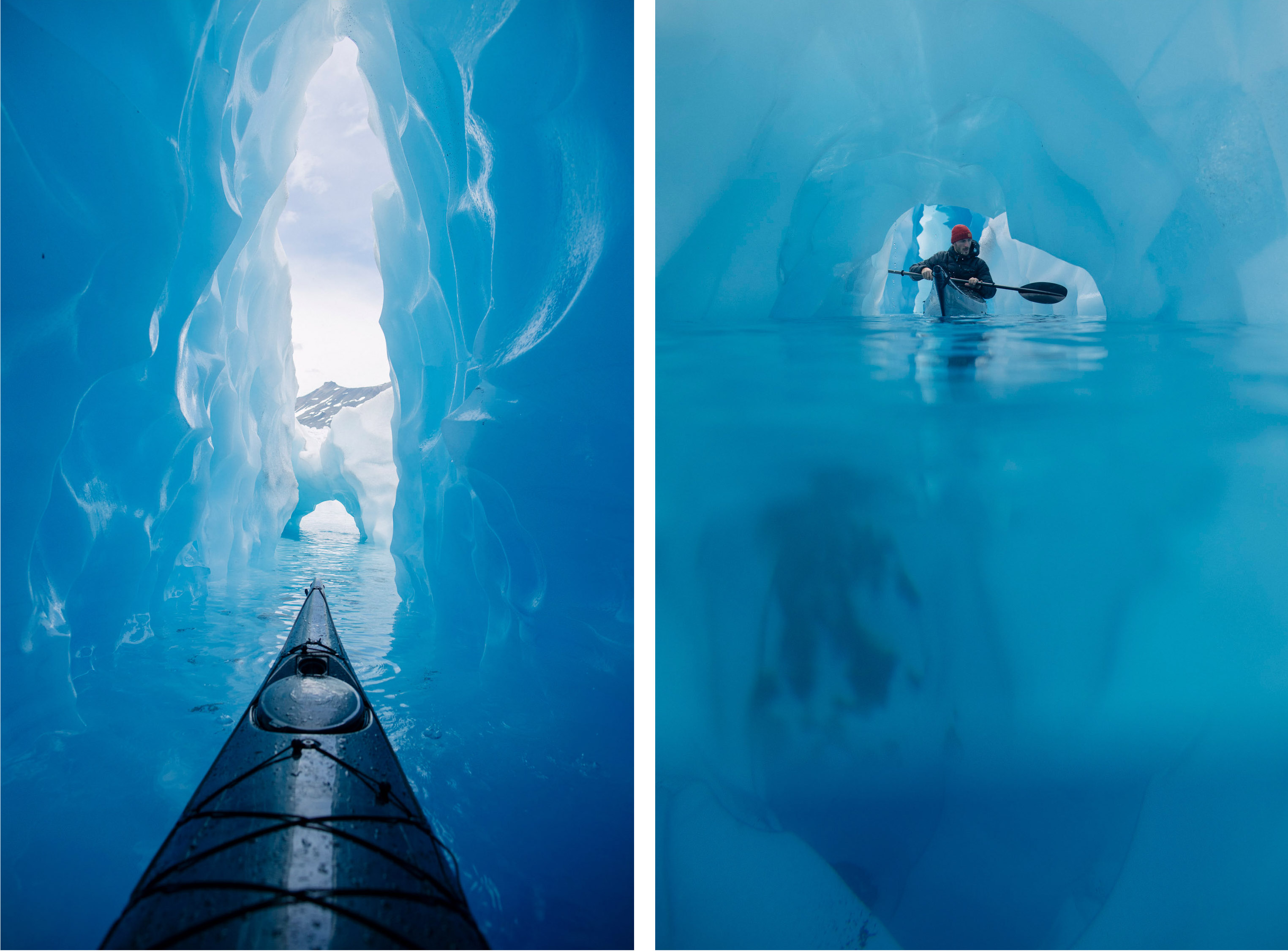 To spend the maximum amount of time on the glacier, we needed a convenient basecamp. Enter Knik River Lodge. The lodge was one of our first tastes of Alaskan hospitality. If you want to get around you’ll often need more than just a car — it takes boats, helicopters, and float planes to find the local secrets and hidden gems.

At the Lodge the owner Peter mentioned he had access to a helicopter and offered to tour us around the glacier. From above we saw this incredible blue lake that had formed atop the glacial ice. Immediately we wondered if it was possible to get our kayaks up there. Peter told us that if we could get the kayaks to the mouth of the glacier in our Land Rover, he could probably sling load the kayaks up to the lake and land somewhere nearby. Kayaking through crevasses and staring through the clear water into the heart of the glacier is something I’ll never forget. 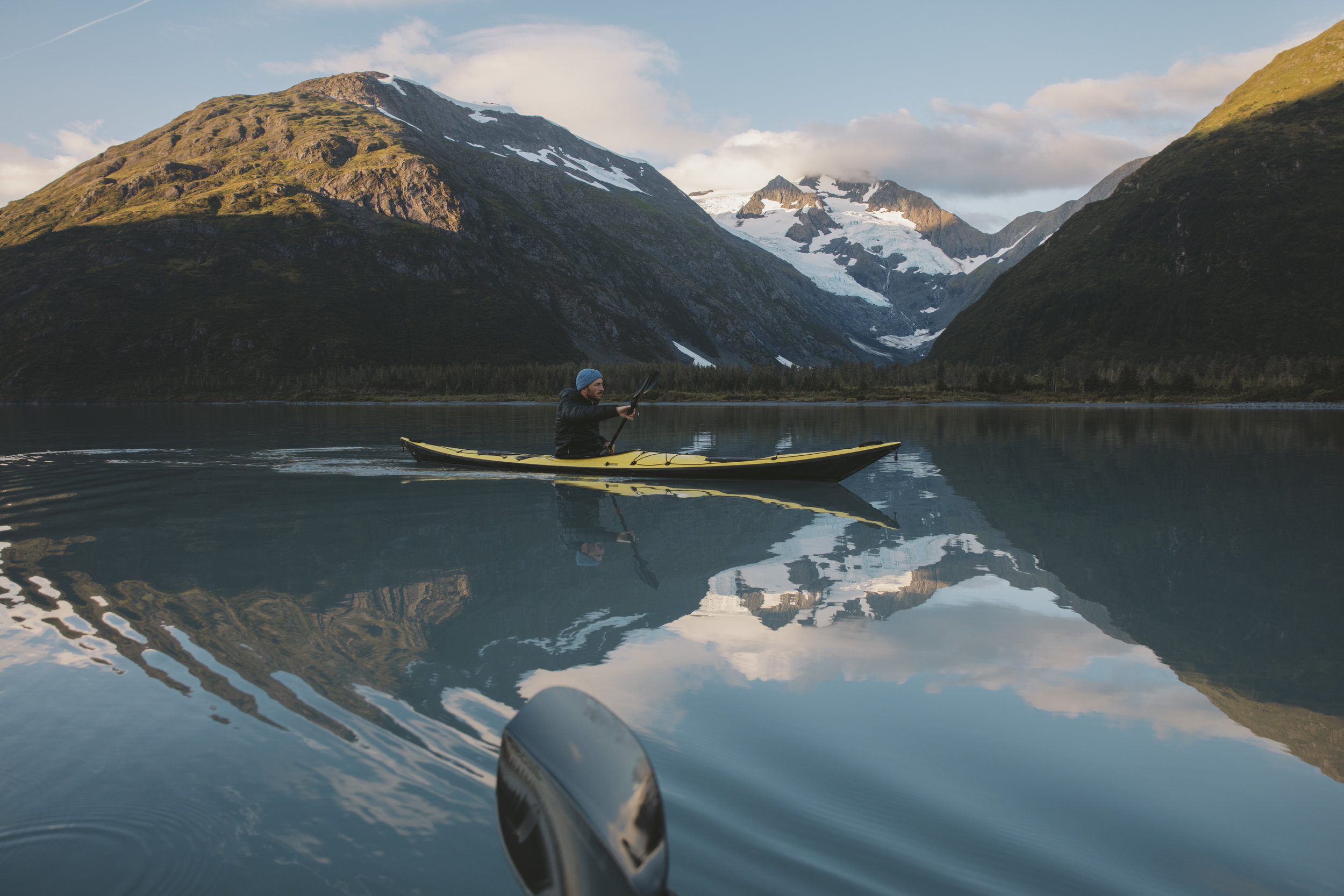 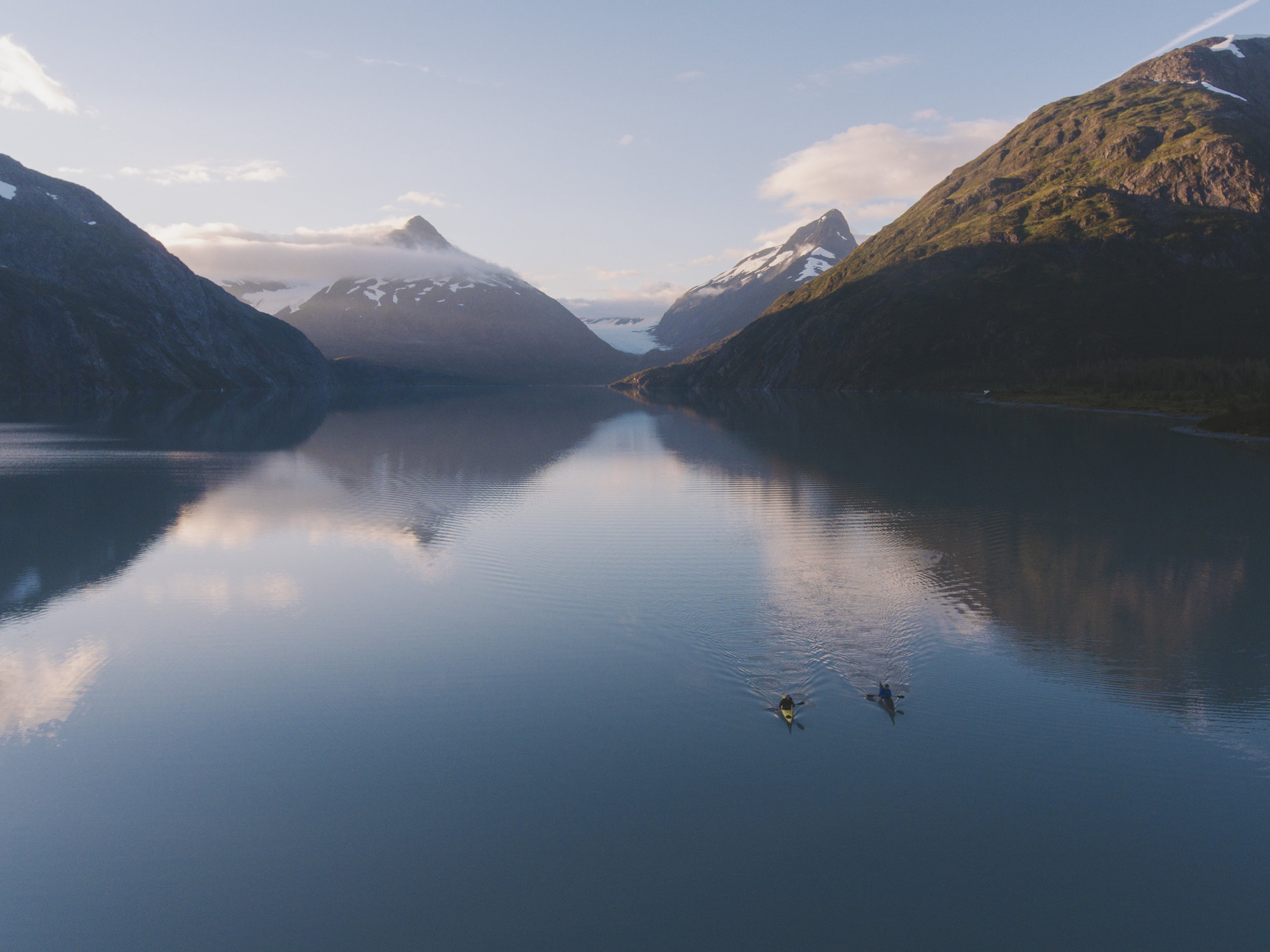 Portage glacier rests behind a large lake bearing the same name. For weeks we tried to catch it on a calm morning; however, being so close to the ocean weather was unpredictable and often both wet and windy. Finally, just a few days before we were headed off the peninsula, conditions were ideal. It was a magical sunrise as we paddled towards the glacier through perfectly still waters; patience was a virtue.

Life on the road 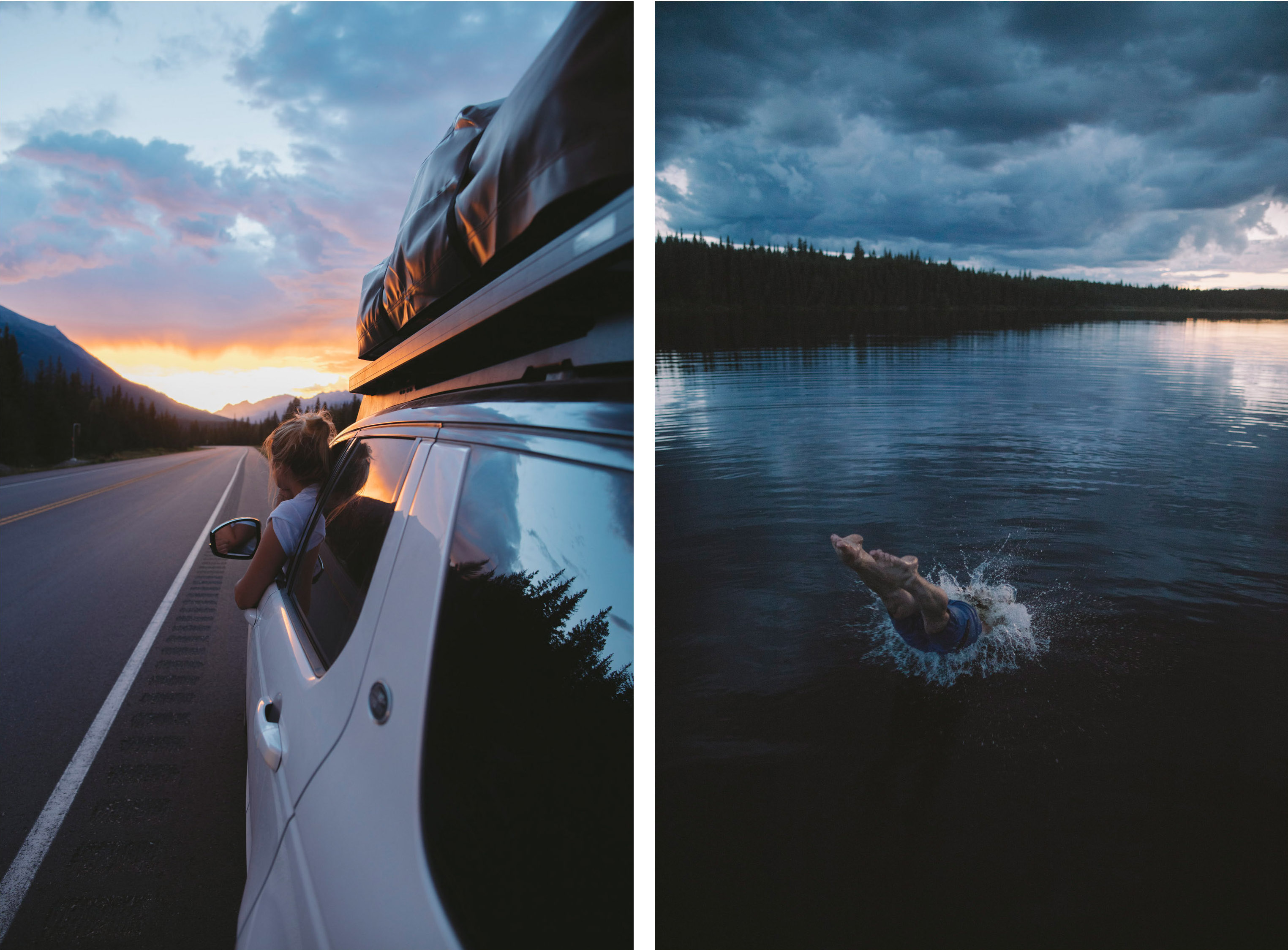 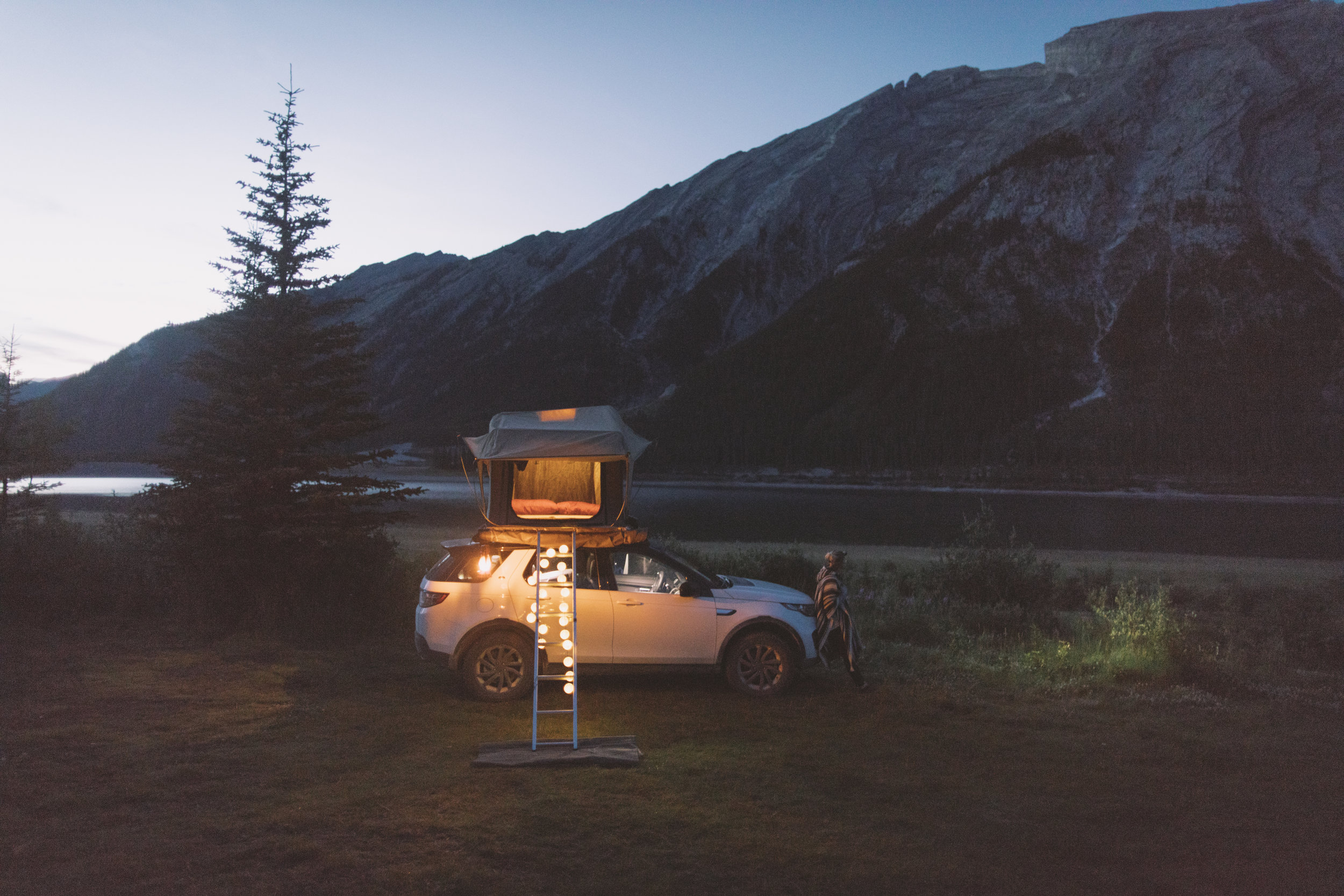 Life on the road means freedom, finding swimming holes off the road, scouting camp spots in the hills, and choosing whenever you want to stop. None of us had driven the entirety of the Alaska highway. Carving through Northern BC, south-western Yukon, and the heart of West Alaska was fascinating. Watching the ever changing landscape shift over the long and impossibly diverse highway was something that you can only experience in a car. Everyday, we would try to find an impossible mountain trail with potential for good views and having the Discovery Sport to do so was a bonus. 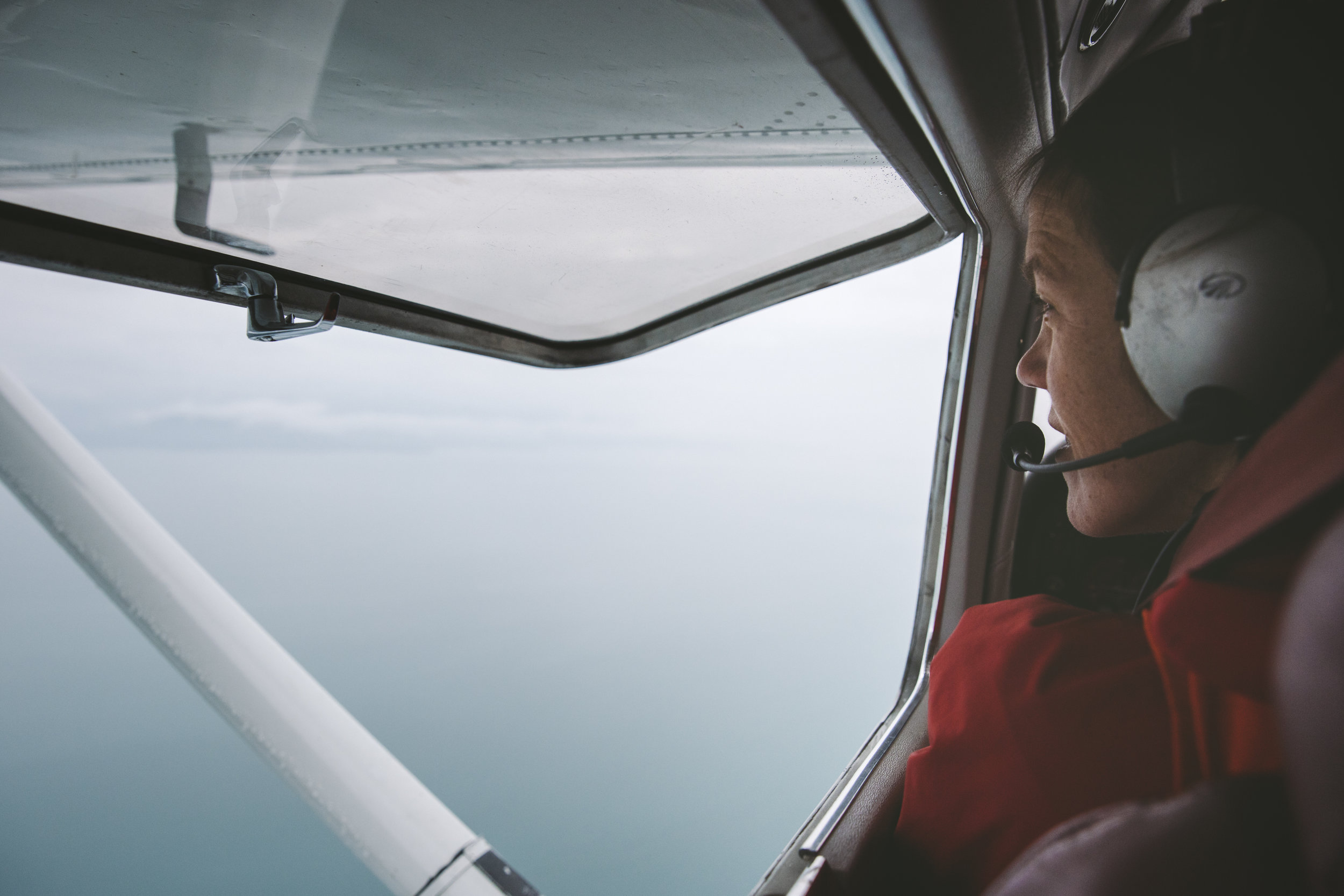 Dealing with weather and its rapid shifts in southern Alaska became a theme of the trip. Despite spending the heart of summer here the changes were common and unpredictable. While down in Homer we hoped to get up in a float plane above the Harding and Kenai Ice-fields. Eventually we caught a break on this rainy overcast morning to get up, the most beautiful time of day was often just as the rain cleared, so the sun could peak softly through. 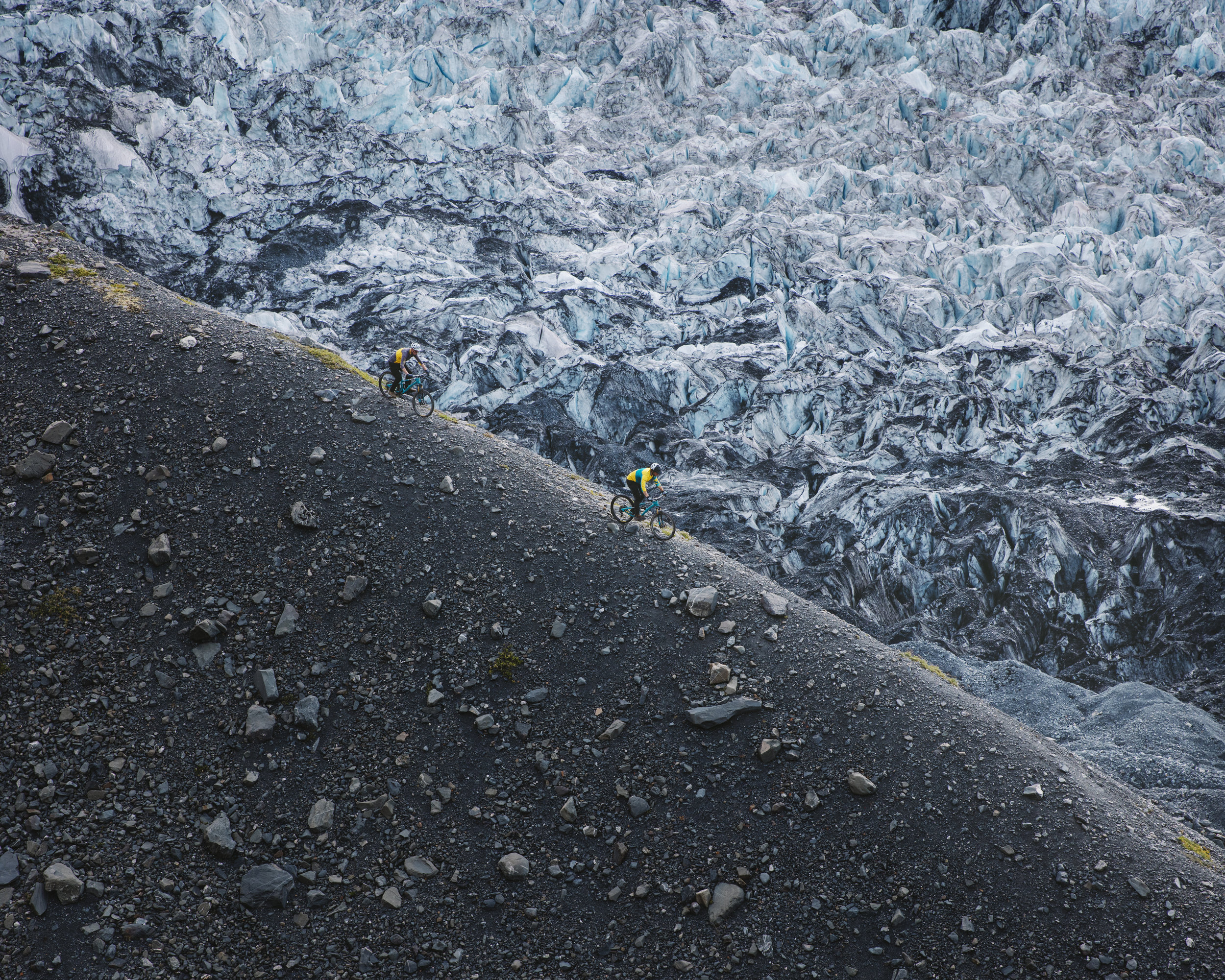 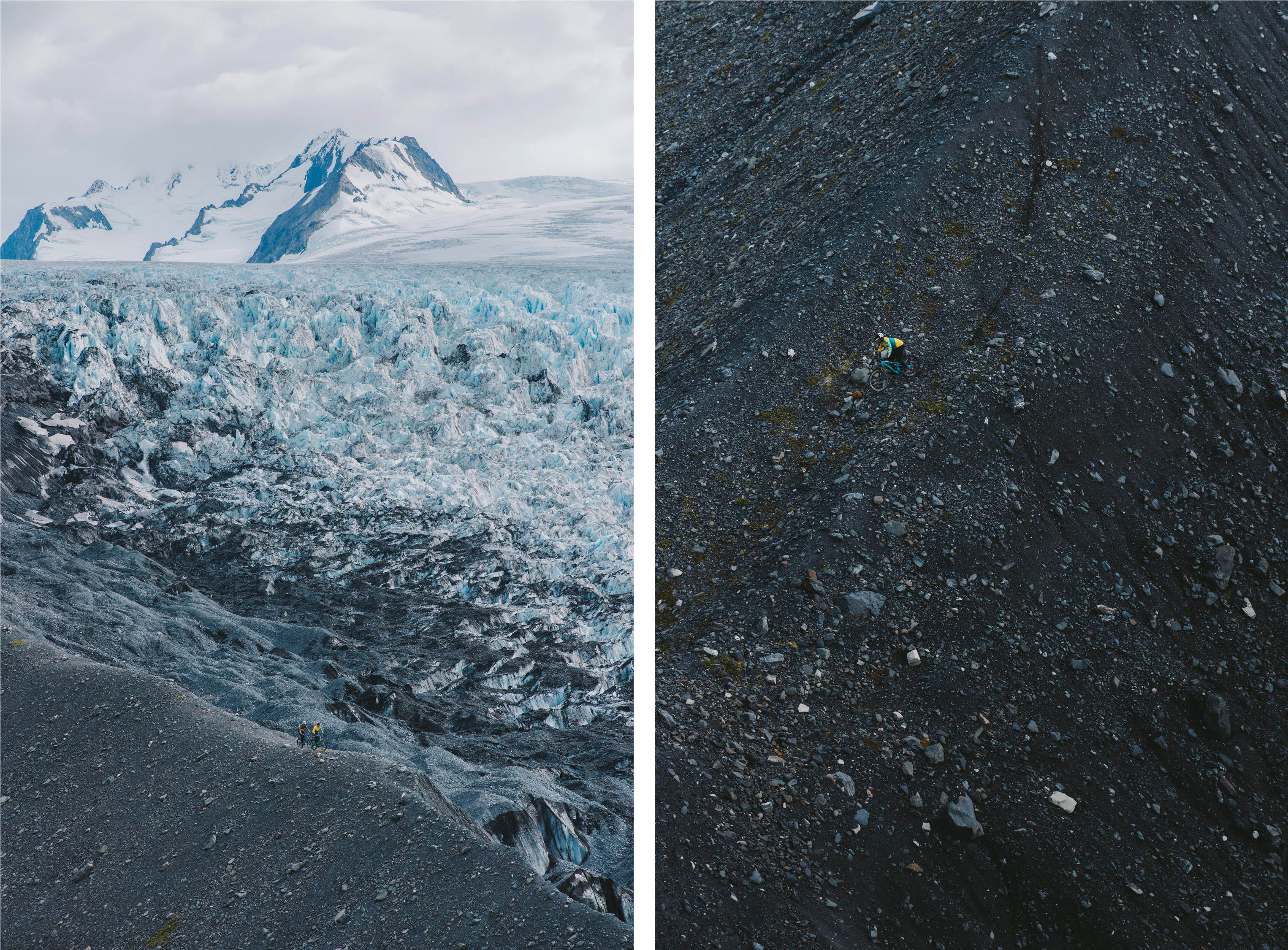 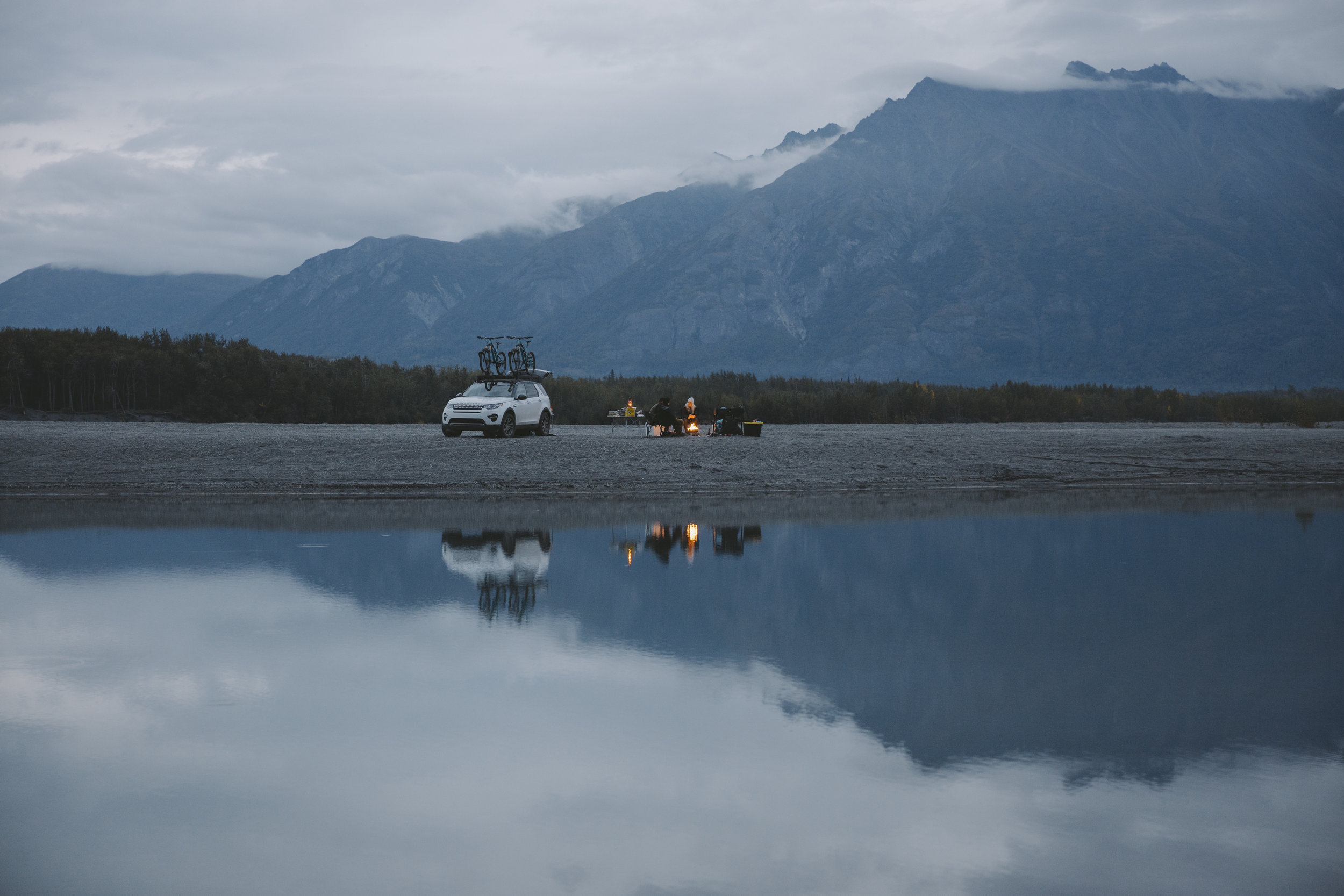 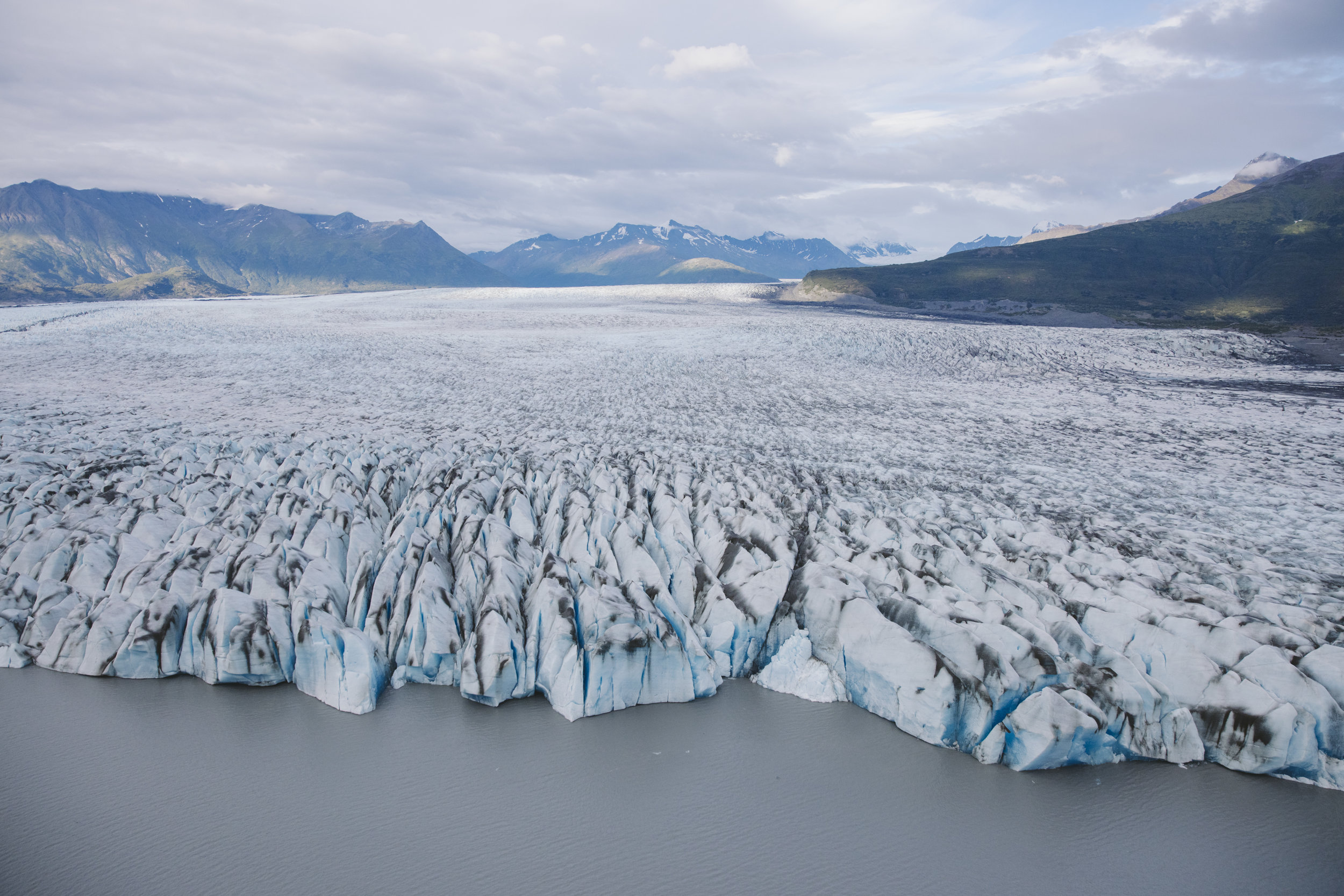 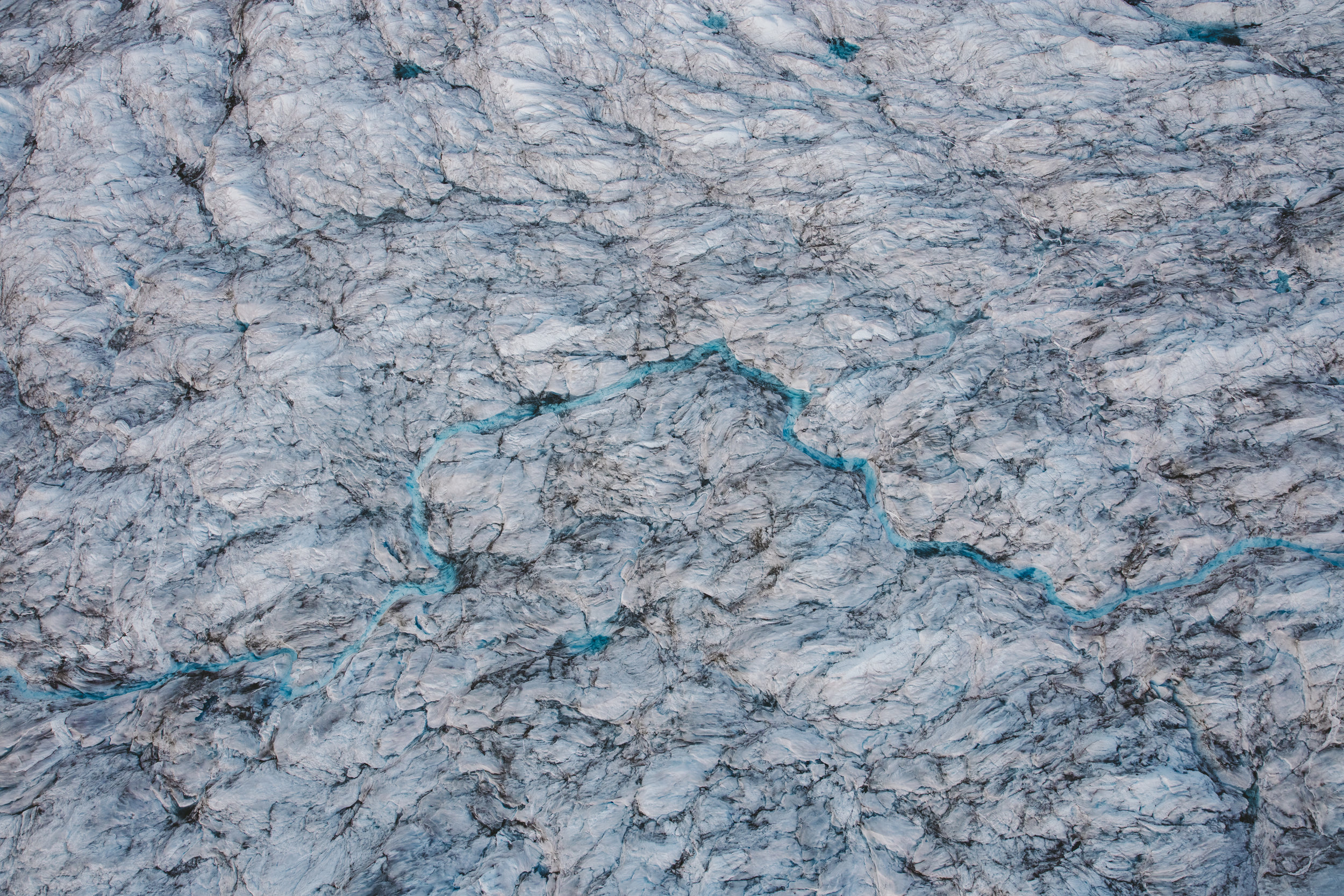 I had this photo series in mind for most of the trip, from up in the heli as two friends biked underneath along a gravel ridge, skirting the glacier. Something about the contrast drew me to the idea of someone biking surrounded by ice, in such an inhospitable environment. After about a millisecond of hesitation, Peter from the Knik River Lodge agreed to hop on the second bike with Isaac, not being a very experienced biker himself, but game to try something that probably hadn’t been done before. 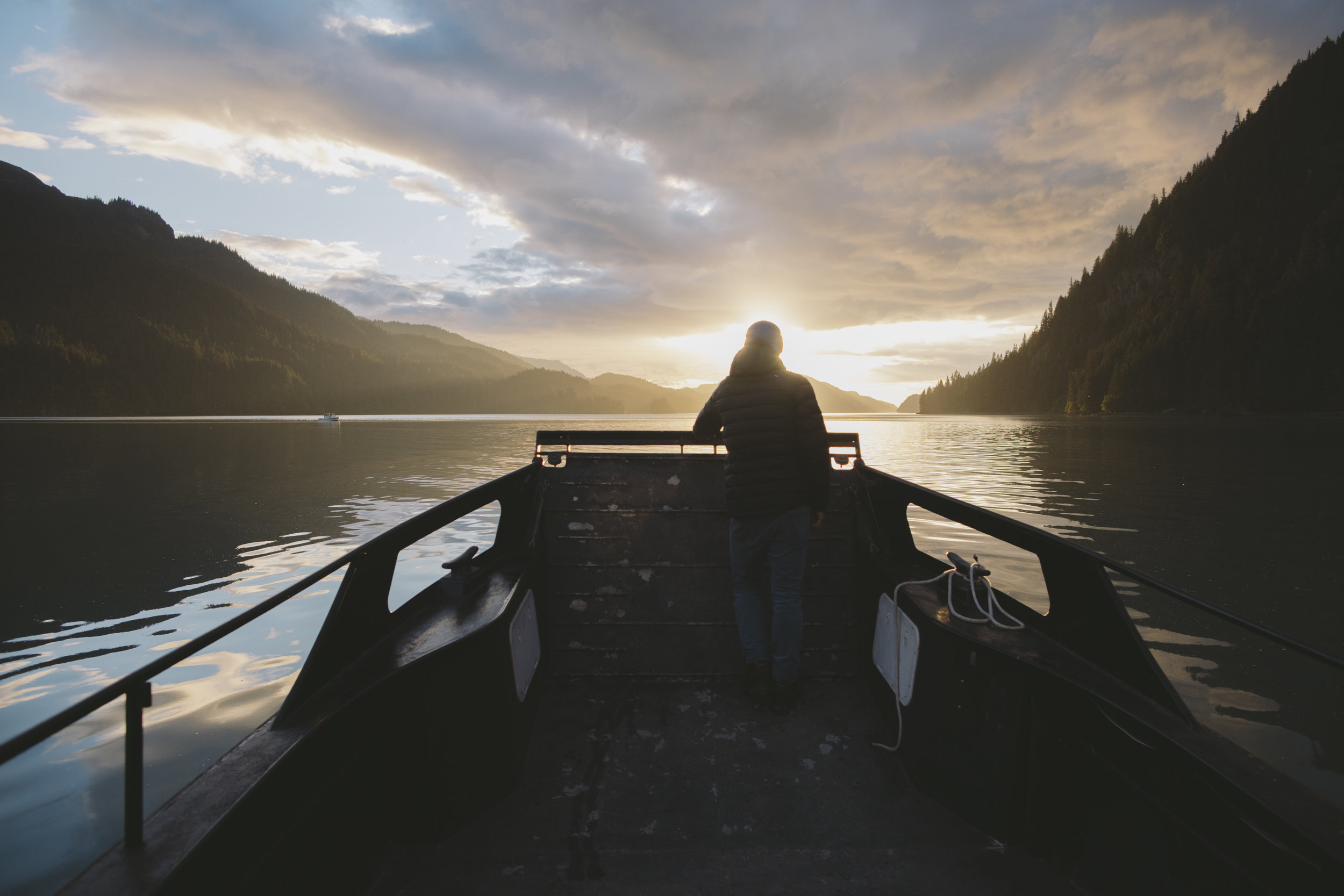 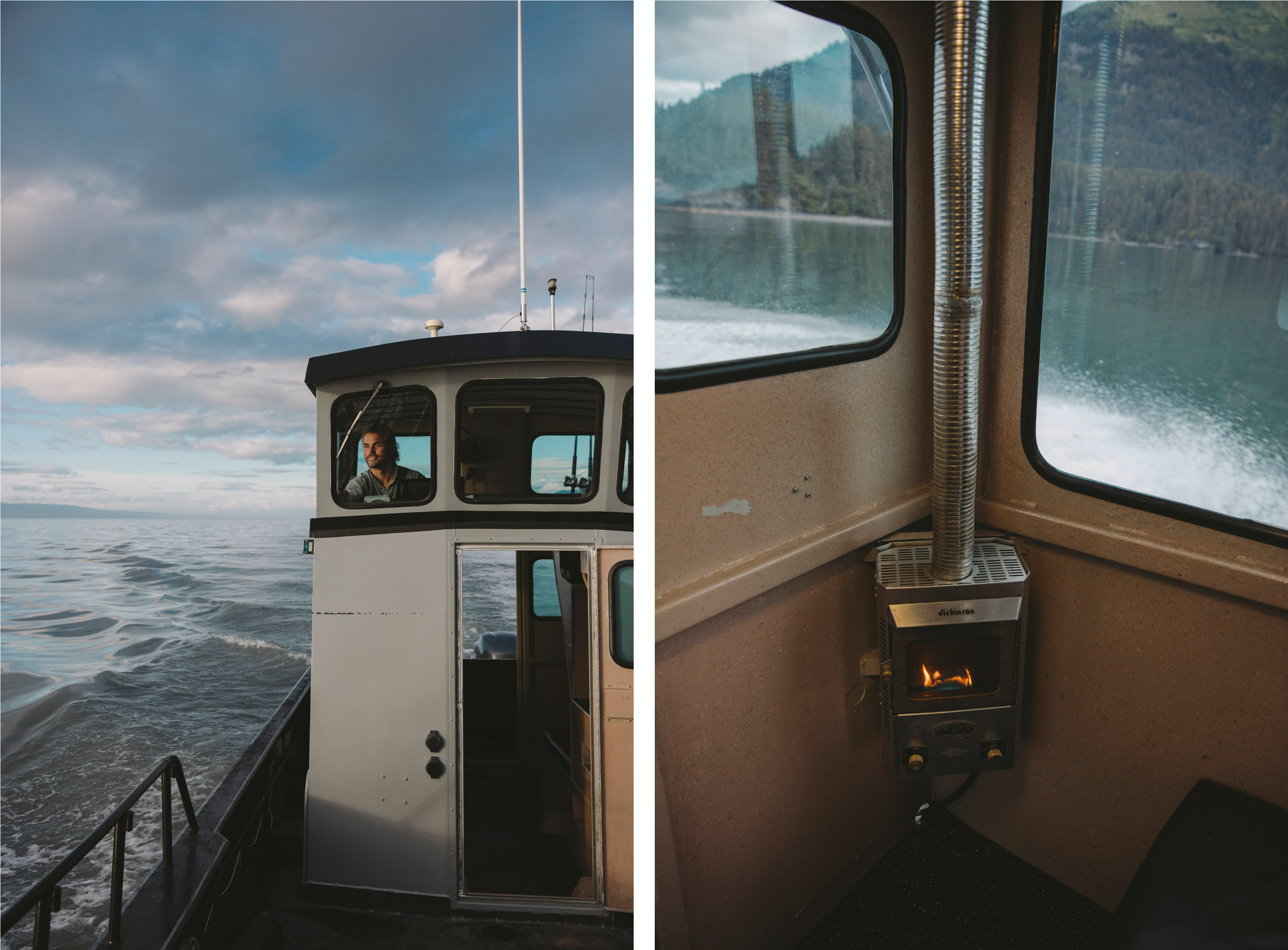 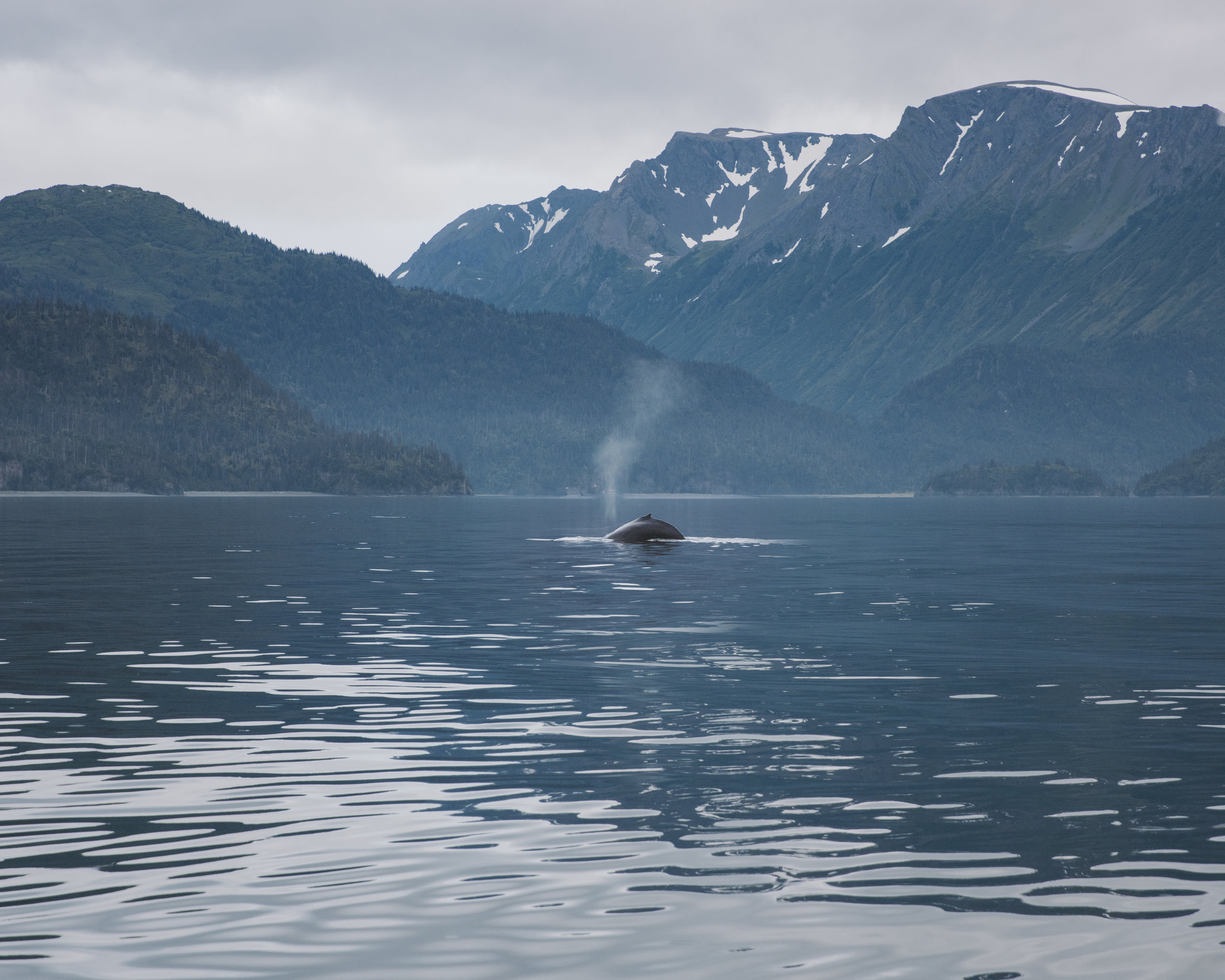 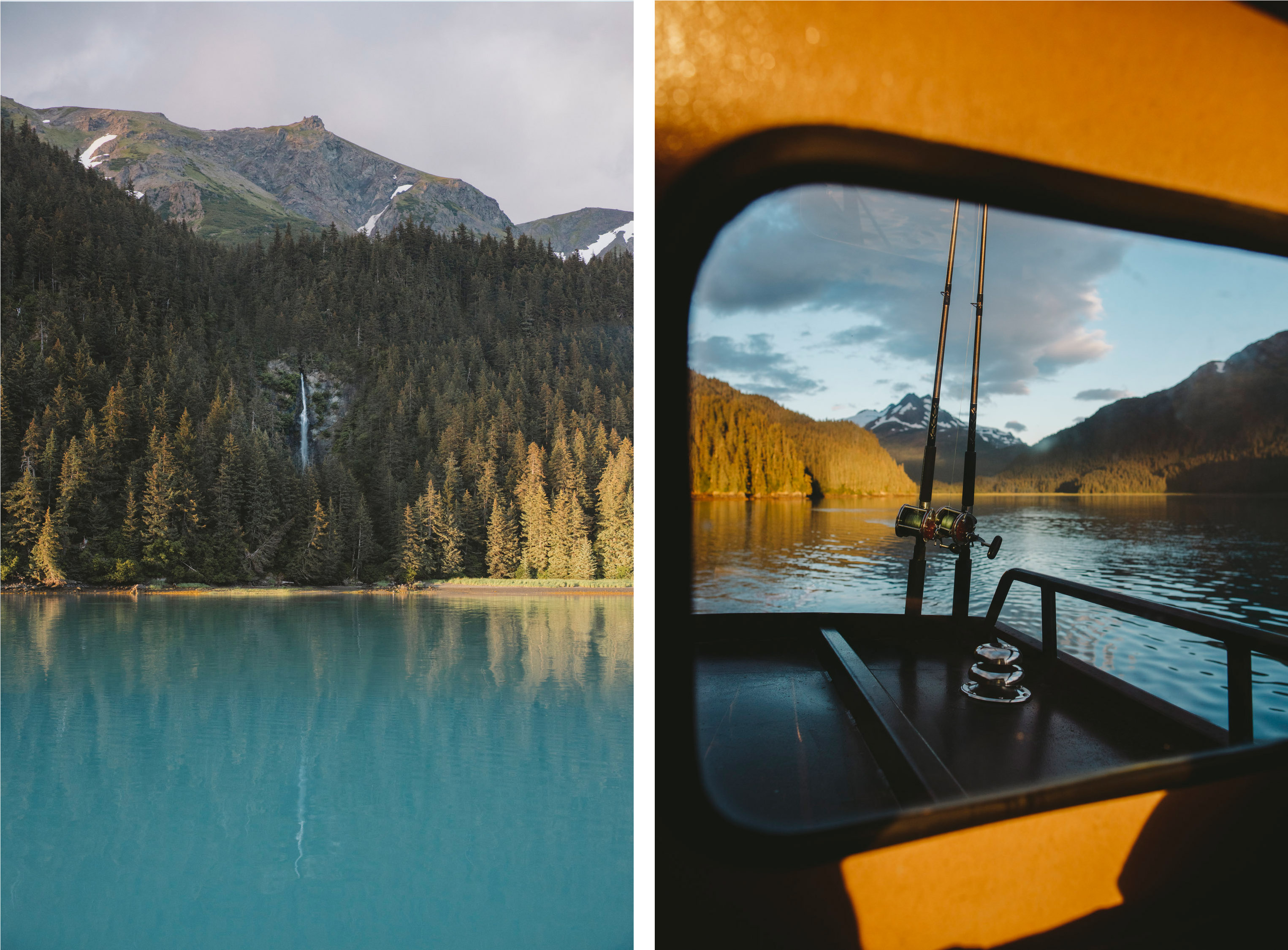 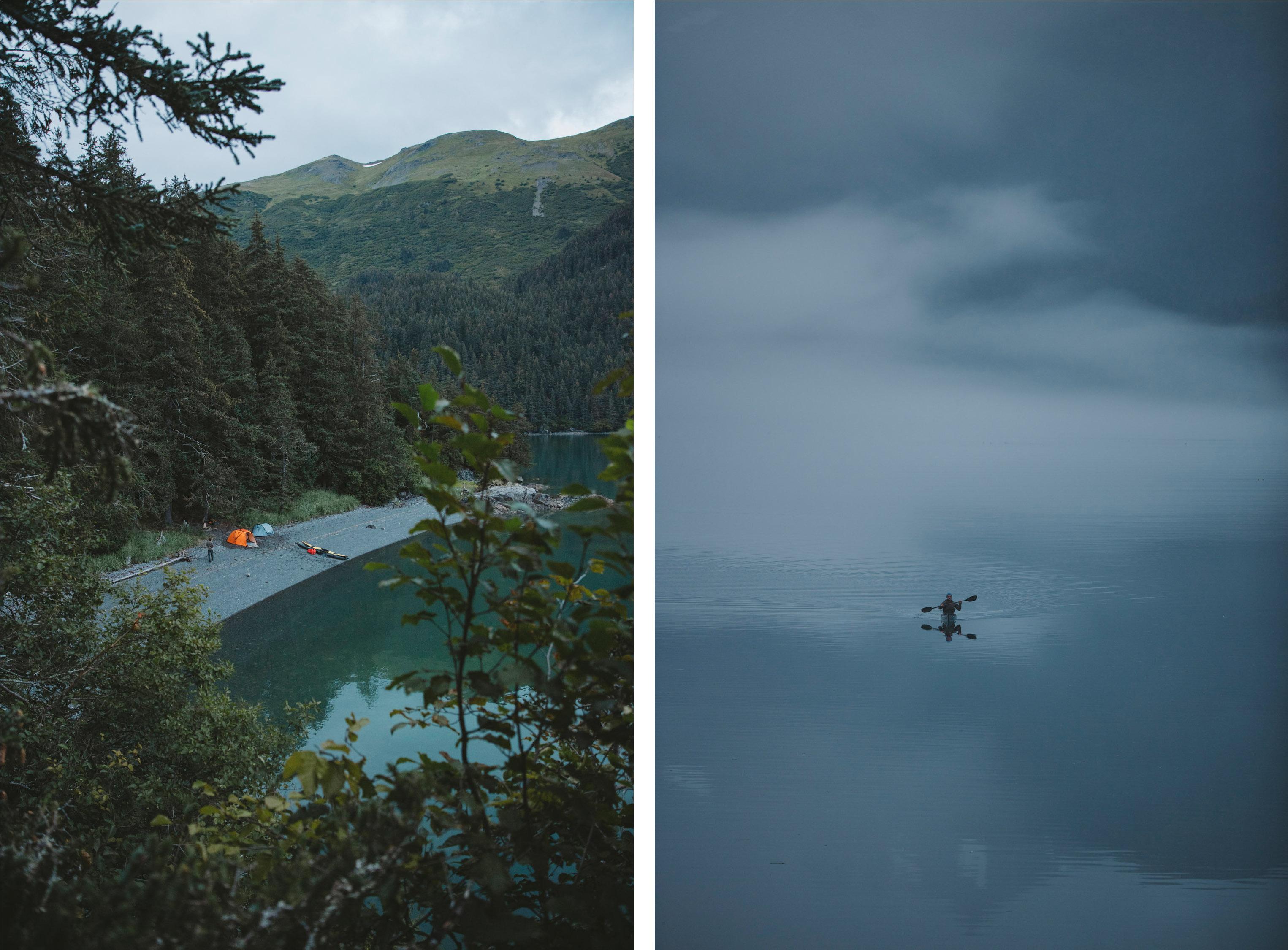 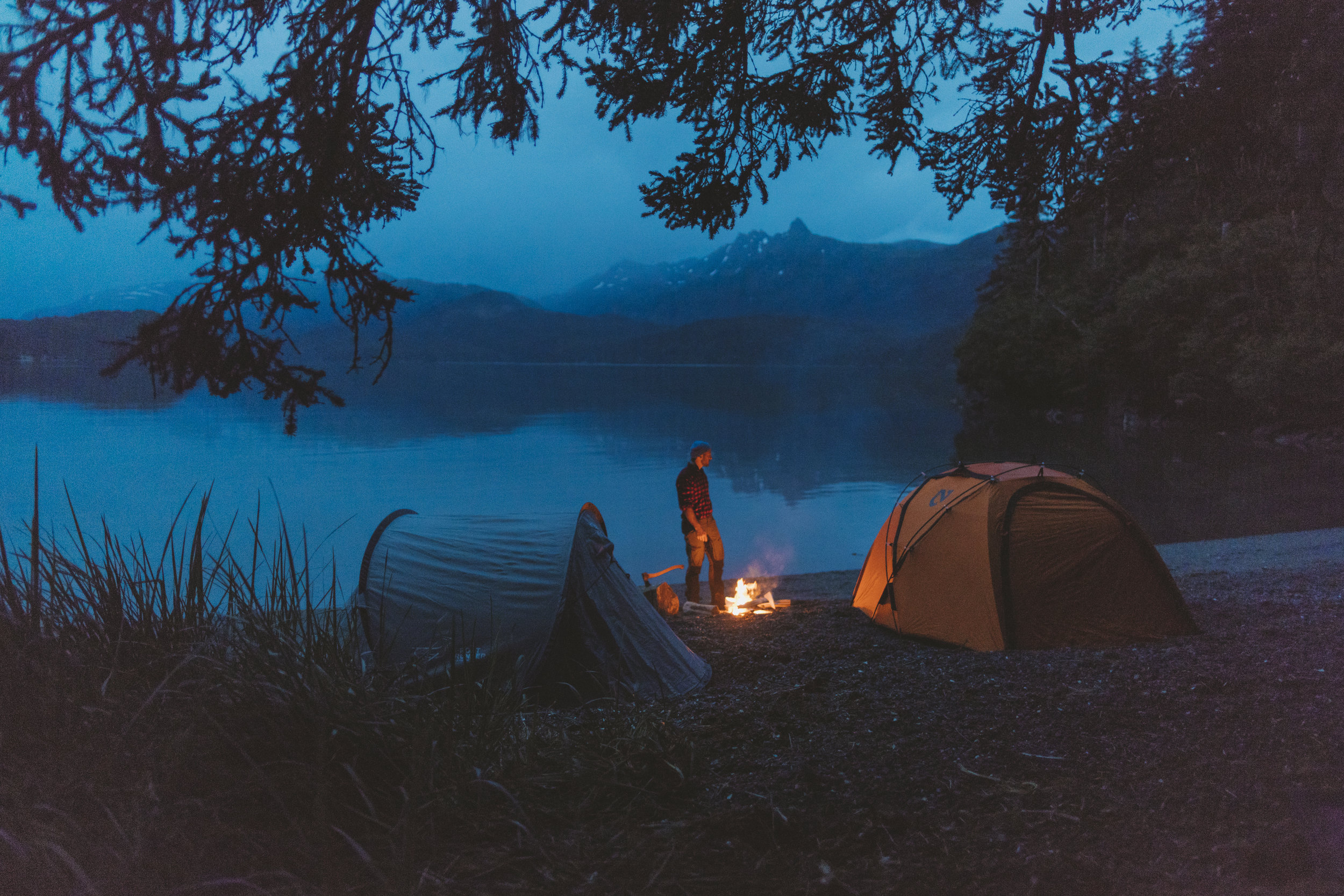 If you want to find a gem hidden in the Alaskan landscape you better find someone who knows. Down in Homer, tucked into the Fjords, that probably means someone with a boat. For us that meant Brad from Coldwater AK. We had spent the day before out on his boat, tracing the coastline, looking for a spot to camp. Eventually we found an island tucked down a nearby peninsula, an island we had no chance of finding, much less accessing, without the help of someone who grew up on these waters who called this bay home.

Note: This post was originally published on Matador Ambassador Alex Strohl’s website, and was re-posted with permission.

How to road trip from Anchorage to Denali, even in winter

Here’s when you can see the northern lights in Fairbanks, Alaska

Dog sledding is Alaska’s national sport, and you can try it in Denali