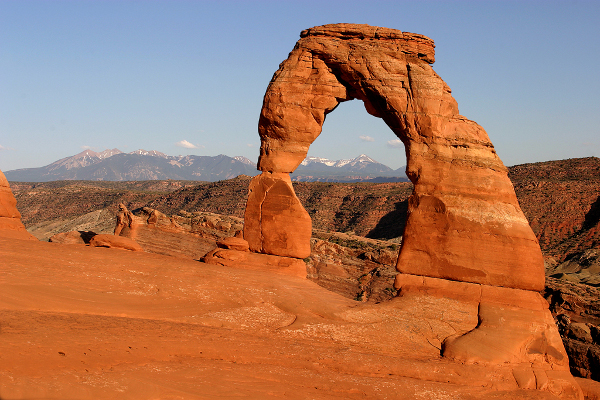 I’VE ALWAYS BEEN drawn to deserts. They’re not at all like the bone-strewn wastelands of cowboy movies. Deserts are full of interesting plants and animals, and their big, dramatic vistas always put me in “sit awhile and think” mode.

It is true that the desert can be a harsh environment to camp in. Visitors from other climates may be put off at first by the extreme temperatures and unusual fauna, and may need some time to get used to the surroundings.

For me, it’s all about falling into “desert rhythm”: I’ve learned that I have to leave behind the routines that I follow at home and start thinking like a desert-dweller instead.

1. Bring more water than you think you need 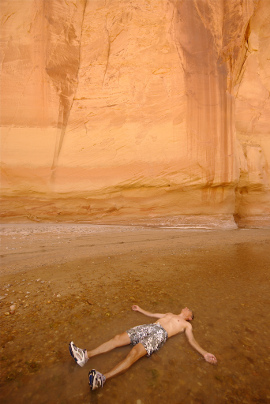 If you heed only one tip from this list, make it this one: dehydration is probably the biggest danger in the desert. You’ll drink far more water in the dry heat of the desert than you would in a more humid climate. You can expect to polish off at least two liters on a half-day hike, so your Nalgene alone won’t cut it.

Know where local water sources are, and bring iodine tablets or chlorine if necessary. Always carry water when hiking, and drink it frequently. Don’t wait until you’re thirsty: by then, you’re already dehydrated.

Deserts are home to some incredible creatures, including foxes, lizards, and many species of snakes. Most of them are harmless, but a few, like scorpions and rattlesnakes, can be hazardous if provoked.

The good news is that none of them have any interest in hurting you, assuming you leave them alone. Rattlers and other snakes often sun themselves on dirt paths and the shoulders of paved roads, so watch your step. Don’t go poking around in holes in rocks, and make a habit of shaking out your boots before you put them on.

In the unlikely event that you’re bitten by a rattlesnake, stay calm and call 911. If you’ll be far from civilization, it isn’t a bad idea to carry a compression bandage – if bitten, you can slow the spread of the venom by firmly wrapping the bitten area, but make sure the bandage doesn’t cut off circulation to the limb.

Because of their low humidity, deserts are often hot during the day and chilly at night. In some instances, the temperature can even dip below freezing. Warm clothing and an extra blanket or two will go a long way towards helping you feel comfortable after dark.

I’ve found that in many places, temperatures hit a low point in the early morning, shortly before dawn. If I’m planning to get up before sunrise, I’ll usually put on a sweatshirt and take it off once it begins to heat up. 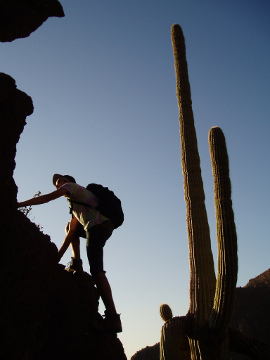 Many desert animals are crepuscular, becoming most active around dawn and dusk to avoid the midday heat. It’s a strategy that works for humans as well.
You’ll be much more comfortable if you try to keep most of your physical activity to the early and late hours of the day. During the hottest midday hours, be absolutely lazy: read, sleep, just hang out.

5. Pay attention to your tent

Many tents are built with a canopy made of light-colored, somewhat translucent fabric and a floor made of dark-colored tarp. In the desert, this common design can cause problems: light filters through the roof and heats up the floor, essentially turning the tent into a solar oven.

I learned this the hard way while camping in the desert near Bishop, California. One afternoon, I returned to my tent and found that my deodorant stick had become liquid, the plastic cover on my portable phone charger had warped, and the glue holding together my boots had melted.

Try to pitch your tent in the shade, or cover it with an opaque tarp. If that isn’t possible, unzip your tent’s vents and move heat-sensitive items outside.

A word on conservation

Deserts may seem barren, but they’re actually very delicate ecosystems. Avoid disturbing plant life or cryptobiotic (“crusty”) soil. Plants and crust keep soil from eroding; once they’re destroyed, an area can become sandy wasteland in just a few years. Both are very sensitive to trampling, so keep your explorations to established trails.

See America’s most famous desert festival in One Week in The Desert: a Burning Man Documentary.

5 ways to reconnect with nature in the Blackhills and Badlands

RVs are the way to travel this summer. Here’s where to hit the road.

How to put out a campfire properly, for newbies

Camping is the lowest-risk activity you can do this summer, according to experts

The best ways to start a campfire, regardless of the conditions

Taking someone camping for the first time? Making it fun is on you.