This is my second piece about Jana Henychová, a Czech musher who lives in Horní Maxov with her Siberian huskies and American husband, Rodney (read the first here). Jana has won the European Dogsledding Championship twice in her category. She’s also completed the Finnmarksloppet, a prestigious endurance race in Finland, in both the 500 kilometers and 1000 kilometers categories. Here, I interview her about her dogs, racing, and her daily life.

Jana sits down with me at her kitchen table. She’s a compact blond woman. Today, she’s been out with the dogs already, so she’s wearing outdoor clothes — a sturdy wool sweater with a Nordic pattern and padded overalls. It’s not much of an interview, really. I ask a few questions — on the whole, rather poorly formed ones — but mostly Jana just tells me about her life, and I make notes. The following is a loose translation, based on that conversation.

Jana: Well, you start in the fall with a roller sled, you go slow and use a heavy sled, to build strength. We start our training late August, when the temperature drops a bit. When the snow comes, we lighten up and increase our distances, up to around 70 kilometers. As a musher, you have commands that tell your dogs to make them go left and right – gee and haw. But mostly you just have to practice getting the dogs to move efficiently.

Huskies have a sort of energy-efficient running pace that they can lock into and keep up for a long period of time. You have to train that. You also have to spend time training with your own dogs before you can race them. Rodney was telling you about lending someone his dogs for a race – I don’t think that makes sense. I wouldn’t race someone else’s dog, it would be useless. The dog wouldn’t pull. 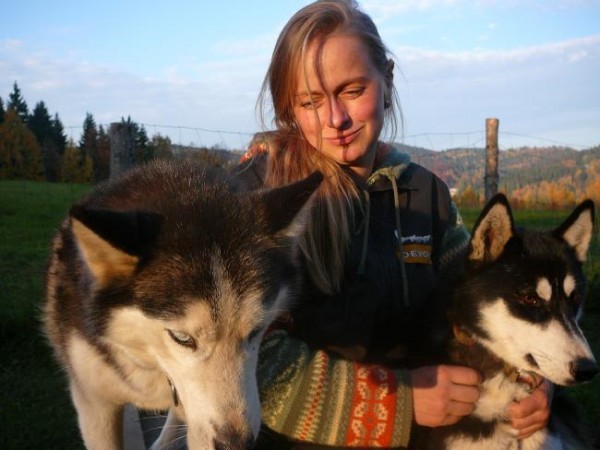 How many dogs race? How do you choose which dogs to race in a given race?

How many dogs race depends by category. For example, in the Iditarod, you have to start with 12-16 dogs, and you have to have six at the finish line. Most of the other races have less dogs. You figure out a pack configuration that works for you – smart dogs in the front, strong dogs in the back, usually. Honestly, I have less than 30 dogs, and some of them are too old to race, or else they’re puppies, so I just race who I have. If you’re a racer with 150 dogs, then you can start making different packs. But then you also have employees who can help train your dogs for you.

You sometimes race really long races – 500 and 1000 kilometers. Do you rest during the race?

Yes, everyone rests. There are checkpoints set up, where you meet your support team, eat, fix problems, and sleep. I think I spend about an equal amount of time racing and resting. The winners race about 60% of the time and rest about 40% of the time, though. At the checkpoints, there are vets that can check your dogs, and you have food and supplies prepared for yourself and for your dogs. The checkpoints are a sizeable distance apart – maybe 70 to 160 kilometers, depending. During some of the Alaskan races, there are sections where you have to camp in the bush between checkpoints, which must be hard – it would be really tough to get any sort of rest in those conditions.

What do you carry with you on long races?

There’s a set list of things you have to carry during races like the Finnmarksloppet. Things like 24 hours’ worth of food, signal flares, full winter camping gear…it gets to be quite a lot. A full sled is around 70 kilograms.

I don’t really eat or drink much during races. I go into this sort of energy-conserving mode where I barely consume anything. I have some dried fruit and chocolate, but I barely drink. Rodney was telling you about how important it is to stay hydrated in the cold, but I don’t really go by that. The more you drink, the more you have to pee, and you really don’t want to do that — to take off all your bulky layers and stick your bare ass out into the cold. And imagine if something messes up and the dogs leave without me. What am I going to do, walk the 160 kilometers to the next checkpoint?

What do you find mentally the hardest about long races?

Honestly, interacting with people at checkpoints. There are checkpoints every set number of kilometers, where you rest and where your dogs get fed and you deal with the logistics of everything, and that can be demanding. When you’re out there alone, it’s more of a reward for all the work you put into organizing all of this and getting it done. This isn’t really a sport done by people who need to be around people all the time, or who always need to be the center of attention. When you’re out there by yourself, it’s really a reward for all the work you’ve done to get to that point. I like just being out by myself in the flat landscape with my dogs. For the 1000 kilometer Finnmarksloppet, I listened to upbeat music a bit, so I wouldn’t start losing it, but for the most part I’m fine by myself.

How do you choose a lead dog?

My first lead dog was Růžena, then her daughter, then her daughter. When you want to train a lead dog, you take an older dog and then take a young dog with a bunch of energy and see whether the young dog can learn from the older one. Once, I put one of my dogs up in front without the older dog, and I saw that she was responding well to the commands, even by herself, so she became a lead dog.

You keep mentioning only female names. Are all lead dogs female?

For me, yes, but I think it’s pretty common for most dog teams. I find bitches tend to be smarter, and they follow instructions better. They also feel less of a need to prove themselves than the boys. If you race a male lead dog, sometimes there’s this sense of fighting for supremacy with the musher, like, who’s on top? And they can sense if I don’t have control of the sled and act accordingly.

Are the racing categories divided by gender?

No, they’re not. Actually, sometimes it’s somewhat of an advantage to be a woman — you’re lighter, so the sled’s lighter. Many of the major races are won by women sometimes. The Iditarod, which is a famous 1500 kilometer race in Alaska, was dominated for a while by Susan Butcher. Women tend to be very successful mushers, actually — I think it has to do a lot with how they treat their dogs. You develop this sort of maternal approach, like they’re your children.

Men tend to be stronger than women, though. What’s role does physical strength play?

How do you raise money for these races?

I do presentations, I teach courses, I host camps. Rodney and I just had a corporate retreat for the executives from [one of the major European cell phone companies]. People find us via our website huskies.cz, or via word of mouth. I would love to race something like the Iditarod, but for something like that, you’d need a big sponsor that would help you raise two to three million koruna [Note: Divide by twenty for USD].

I’ve gotten really good at seeing wildlife or small changes in the environment before my dogs do. They more smell them. On the other hand, when I go into the city, I get overwhelmed by all the movement and the noise. I don’t really like going into the city much.

We’ve been talking for a while now. At this point, Jana says, “Okay, I’m tired, that’s enough storytelling!” I thank her for her time and wish her the best. Listening to her talk has been fascinating for me, but I realize that she’s in this role all the time – the “please, you do something extraordinary, would you mind telling the nosy public about it” role, and it must get tiring.

Rodney is going out for a smoke, and he asks if I want to see the dogs – of course I do. We pass the hallway, and he shows me the meat locker where he and Jana keep the food for their dogs. They use a base of dry food and add ground beef and carp to it. It’s quite a sight – giant tubes of anonymous ground meat and fish product, thawing in a bucket on the tiles in the hallway. Rodney tells me they also get cow bones from the slaughterhouse in the valley for the dogs to gnaw on.

We go outside. Jana’s dogs have recently had puppies, and there are three in a separate enclosure. I go into the enclosure, and they jump all over me. They are, as is to be expected, playful and adorable. Their mom jumps on me too, and there’s a brief moment where her intimidating white-blue eyes lock into mine in an intense death-stare. Afterwards, she seems to like me, though – no biting or growling. Rodney tells me that this enclosure is for some of the female dogs and the pups. One of the male dogs is here too – he’s been brought from Norway to breed with some of Jana’s dogs. He can’t go into the main enclosure, because he’s not part of Jana’s dog pack, so the other male dogs would tear him apart.

I could probably cuddle puppies indefinitely, but I don’t want to impose any more on Rodney and Jana’s time. I get out of the enclosure and thank Rodney and bid him good night and start walking home down the road under dark green conifer trees and a very bright moon.

Tagged
Ski & Snow Czech Republic
What did you think of this story?
Meh
Good
Awesome

10 Czech Customs the Rest of the World Should Adopt

6 Ways To Get Away From the Crowds in Prague

Watch: a Timelapse That Will Make You Yearn for Bohemia