THE GOALKEEPER rocked on his heels, took two half-skips forward and drove 74 minutes of sweaty frustration into the sweet spot. The ball sailed high over the center line. On the pitch below, a cluster of players jockeyed, looking for the angle that might change the game.

I was at this past summer’s International Gay and Lesbian Football Association (IGLFA) North America Cup, a continental soccer tournament that was part of the Gay and Lesbian International Sport Association (GLISA) Outgames. Matches were being decided at Vancouver’s Thunderbird Park, an athletic complex near the University of British Columbia, and though it was only 11:00 a.m., the sidelines were littered with cast-off cleats and jerseys.

Players were hurting. The Cup is an amateur event — there are no tryouts to compete — yet there was an unsettling uniformity to the players. With a single exception, they were all male. 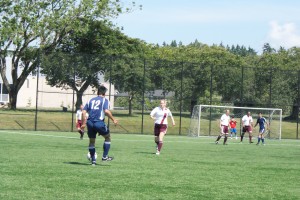 Just weeks before the Cup kick-off, organizers had cancelled the women’s division. Though the remaining competitions were technically open to players of all genders, the web site showed “Men’s Division I and II”.

“What’s the skinny on women’s participation this year?” I asked, as I joined a group of spectators at the goal-side fence.
IGLFA tournaments are open to lesbian, gay, bisexual and trans (LGBT) and allied adults (18 and older), with no specific qualification other than the desire to participate, and organizers work hard to make play possible.

Even those without a team can register individually; they’ll be seeded to a squad with a slim roster. Tournaments like this seek to empower through sport, and women’s participation is right there in the mission statement:

The International Gay and Lesbian Football Association (IGLFA) shall foster and augment the self respect of gay women and men throughout the world, and engender respect and understanding from the non-gay world, through the medium of football (soccer).

“Women don’t like to travel for week-long events,” another added.

It was the same answer I’d been hearing all week, and though the generalization made me uncomfortable, I nodded. “The cost is significant, that’s for sure,” I conceded. “And there’s the kids issue.”

The economic realities of LGBT adults tend to mirror the broader population – and sometimes exaggerate it. In a 2010 report for the Canadian Parliamentary Information and Research Service, author Julie Cool used 2008 metrics including total earnings data to measure the gender wage gap.

Her findings: In 2008, women earned 64% of what men earned. Theoretically, a family with two female earners would net 78% of the income of a straight couple. The number drops to 64% when compared to families with two male earners. Taking into account the responsibilities of having kids – and according to 2006 Statistics Canada numbers, 4 times as many lesbians as gay men had children under the age of 24 living in the home – maybe it’s not such a mystery why women are underrepresented at the event.

I’d come to see this particular match because my hometown Toronto was competing. Out on the left flank, Shane was zigzagging like a German Shepherd, deftly herding his opponents into neutral zones. At my first IGLFA competition in Buenos Aires, Shane had taught me how to shoot the ball long by using the top of my foot. 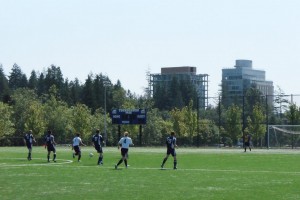 “Hit it right on the laces,” he’d coached, his right foot swinging forward en pointe. Turning me into a striker was a losing proposition, but after a week of non-stop soccer games, our friendship had cemented.
In fact, in the four years since the tournament in Argentina, I’ve maintained friendships with most of the guys I’d played with – friendships that have resulted in travel, housing, and work opportunities. Team sports are uniquely suited to networking. Hell, played properly, soccer is networking.

“Get there!” hollered a benched player from Toronto’s opposing team, his forehead turning crimson like the stripe on his jersey.

“Quick question” I said, and scooted over to his side. “How many women do you have on your team?”

“One. She’s on the pitch.” I followed his gaze to a midfielder motoring down the field, gently tacking the ball between her boots. When I turned back he’d jumped to his feet and was pacing anxiously on the sideline.

“There’s one other girl here.” The voice came from behind me, over my shoulder. I stood to face a young guy with a faux-hawk who was busily snapping photos with his iPhone. “She played in the first game but I haven’t seen her since.”

Thirteen registered teams, at an average roster of 15 each, I thought, doing the math. That’s about 195 players, two of which are women which is…

“Hey,” I dragged the guy’s attention away from his phone. “Do you have a calculator on that thing?”

1.025. Just over one percent of the players at this Cup were women – a disappointingly low number, and one I suspected had to do with more than just imprecise language on the web site. 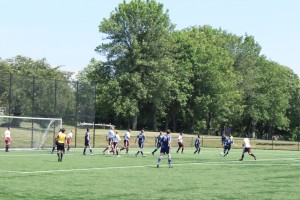 FOR THE WEEK of the games, Vancouver hosted seemingly endless cruises, parties, and sporting events, all of which culminated in the grandest celebration of all: Vancouver Pride. But in between the beer gardens and the DJ sets, where were the day cares, the kid’s play areas, and the family-friendly spaces? Where were the big-name lesbian entertainers? Where were the sponsorships for female players?

Out on the field, a stringy forward succumbed to momentum, sliding into a defender and knocking him off his feet. The referee blew his whistle as the men went to ground. The striker untangled himself and was the first on his feet, holding out a hand to help up his opponent.

“You OK?” he asked, breathlessly.

“Yep – nothing a drink won’t fix,” replied the defender. Then, “You’re buying.”

“What else is new,” the striker chuckled as he jogged back into position.

That’s the thing about amateur team sports: It’s not about sponsorships and medals and money. It’s about relationships, and men and women both are missing out when women don’t show up to play.

Tagged
LGBTQ Travel Vancouver, Canada
What did you think of this story?
Meh
Good
Awesome