THE WAVES WERE breaking at Whisky Point. But by the time we arrived, the wind was up and the sun was blazing down. Not ideal conditions, but the water was turquoise–warm, inviting. Only a handful of other surfers were in the water.

I watched the waves for a few minutes before paddling out in the channel, right beside the rocks. The typical anxiety that usually plagues me while surfing at a new spot seemed to have no effect on me that day. The paddle out was easy because the waves weren’t very big. Most sets were only chest high with the odd bigger set. Wave size, however, was not the reason why I felt so at ease. The feeling must have followed me from the temple. 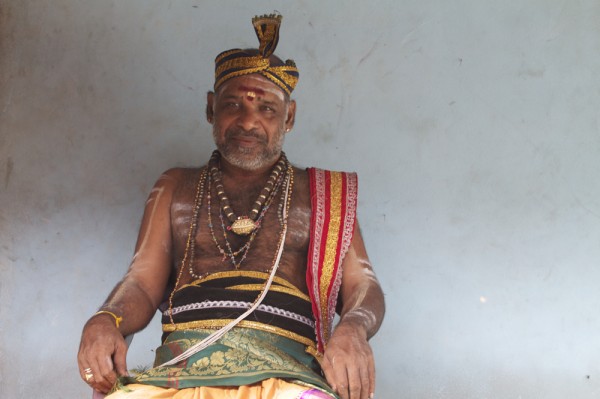 The resident Hindu priest at Okanda temple who performs daily pujas in accordance for temple's deity.

At dawn, we had met Fawas, the chairman of the Arugam Bay Surf Club, and four of the top local surfers, on the main road in Arugam Bay on Sri Lanka’s East Coast. We drove 45 minutes south to Okanda, not only the locals’ second favorite break in the area, but also an important stop for people from all over the country participating in the annual July Kataragama Pada Yatra pilgrimage.

The van came to a halt. I jumped out and started unloading the seven surfboards to clear an exit for the surfers in the back.

“Do you mind waiting for the guys to go to temple before we go out?” Fawas asked us. “They like to pray sometimes before they go in the water.”

“Of course we don’t mind,” I replied.

“Can we go too?” Sean asked. Sean was the official photographer on the trip. The Sri Lanka Tourism Promotion Bureau had invited us to check out the surf in and around Arugam Bay.

“Suuuure,” replied Fawas, his eyes opening wider. This seemed to be one of his favorite responses; we heard it many times over that week.

Walking solemnly to the Hindu temple, along a path lined with people, I felt like I was in some kind of procession. The smell of sea in the air was gradually being replaced by the faint smell of incense. 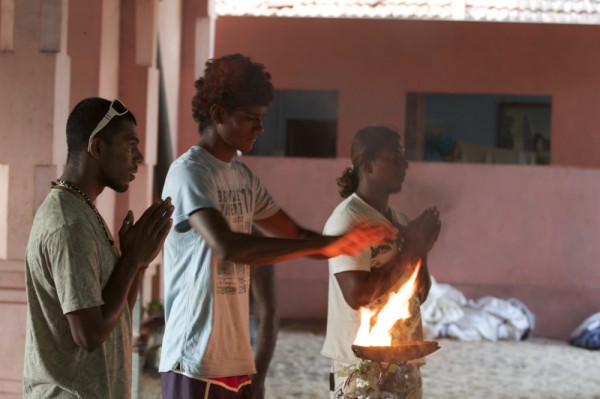 “Are there a lot of Hindu members in the surf club?” I was curious.

“Only a couple: there’s Puchi, and our secretary Krishantha, and one other surfer named Prancise. Most of the guys in the club are Buddhist, and I’m Muslim.”

Sean, Fawas and I removed our sunglasses and dropped them into our caps. We parked our sandals outside the temple gates, in the sand. As we entered, the light changed – it grew darker and heavier. So did the air.

The surfers were in the midst of a ceremony. They had just finished lighting incense and were gathering the smoke with their hands and pulling it towards themselves. Off to the right of the boys, a pilgrim stood waiting with a coconut clasped in one hand. No sooner than the boys had finished dousing themselves with fragrant black smoke, Sean and I were startled by a loud thump. The remnants of a coconut lay on the ground. 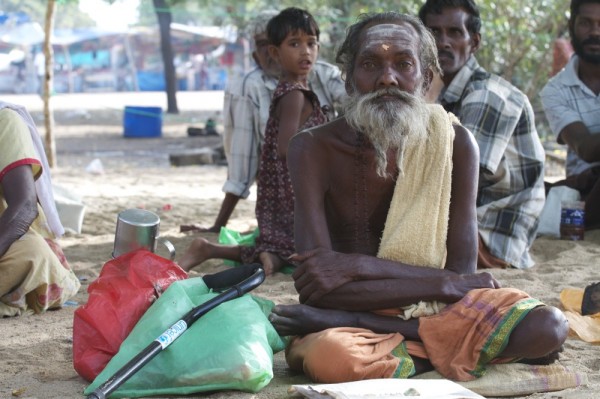 A pilgrim displays a white tilak, a mark applied by the priest during a temple visit.

Drums started to beat somewhere in the background and it seemed as if everyone slowed down to match the tempo, as if in a trance. The deep rhythm lured the surfers to the covered part of the temple, where a number of drummers sat ensconced. Sean and I followed Fawas along the left hand side of the enclosed perimeter.

I just stood there listening to the drums, breathing in the mildly incensed air, and trying to shake little sand flies off my ankles. Red, gold, blue, green – vibrant colors danced in front of my eyes to the beat. I live in Mexico, so I am used to color. But these had a different quality; they were heavy, in the same way the light and the air were, and the weight was intoxicating. I could feel it becoming a part of me. In this reverie, I was expanding on different levels, I had just opened the door a tiny crack to an ether world, enough to catch a glimpse.

Upon exiting, curious people swarmed around us. A man grabbed Sean’s wrist. His wife, a bespectacled lady with hair plaited in a long braid, latched onto my forearm. They insisted that we each choose a color for a bracelet and tied them tightly around our right wrists. They were a gift, they told us, for coming to the temple. When you were on the right path in your life, they said, people sometimes gave you things for free to help you along your way. 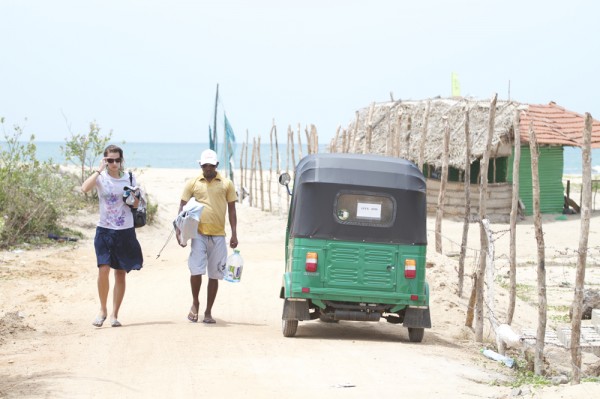 The author and Fawas, chairman of Arugam Bay Surf Club, walking back from a surf at Whisky Point.

When we finally got down to the beach at Okanda, a clean little right hand wave was peeling off the rocks. True, it was small, but it was fast, and secretly I would have surfed it. But the others insisted we go to Whisky Point where the waves would be breaking bigger.

Sitting in the line up at Whisky Point, waiting for a wave, I felt calm. This was unusual for me. I was just happy to be in the water. I didn’t even care if I caught a wave.

“You catch a wave?” Puchi, one of the Arugam Bay boys, said to me as he paddled past. I wasn’t sure if it was a question or an order.

“That’s OK. You go. I’m in no hurry,” I replied. I was enjoying the moment contemplating my mystical experience at the temple in Okanda.

When I did catch one, it lined up perfectly. I shot down the face and did a big bottom turn. From there I glided up to the lip and turned back down. I had picked up too much speed and had to cutback to pick the wave up again. I surfed it for what felt like a really long time. And when the wave came to an end, I knew more were on their way.

Tagged
Surfing Trip Planning Sri Lanka
What did you think of this story?
Meh
Good
Awesome

The newest US national park is in West Virginia
How to make the most of New River Gorge, America’s epic new national park
For the perfect day of hiking and Colombian coffee, head to Jardín
Miami is a gateway to outdoor adventure on water, wheels, or foot
The 11 hardest, most dangerous mountains to climb in the world

Sri Lanka’s Sigiriya: How to experience the impressive fortress

To the end of the world in Sri Lanka

Island of Dharma: Intense beauty and culture across Sri Lanka

5 ways to save money on your trip to Colombo