Most of us think of beach sand as white or some version of off-white — depending on where that beach is. You’ve likely heard of black-sand beaches such as those in Hawaii but may be startled to find out that beaches can also be pink or even red. And there are few things more beautiful than the sight of pastel pink sand meeting the cerulean blue of a lapping tide. In fact, the pink hue is brightest where the sand is wet. 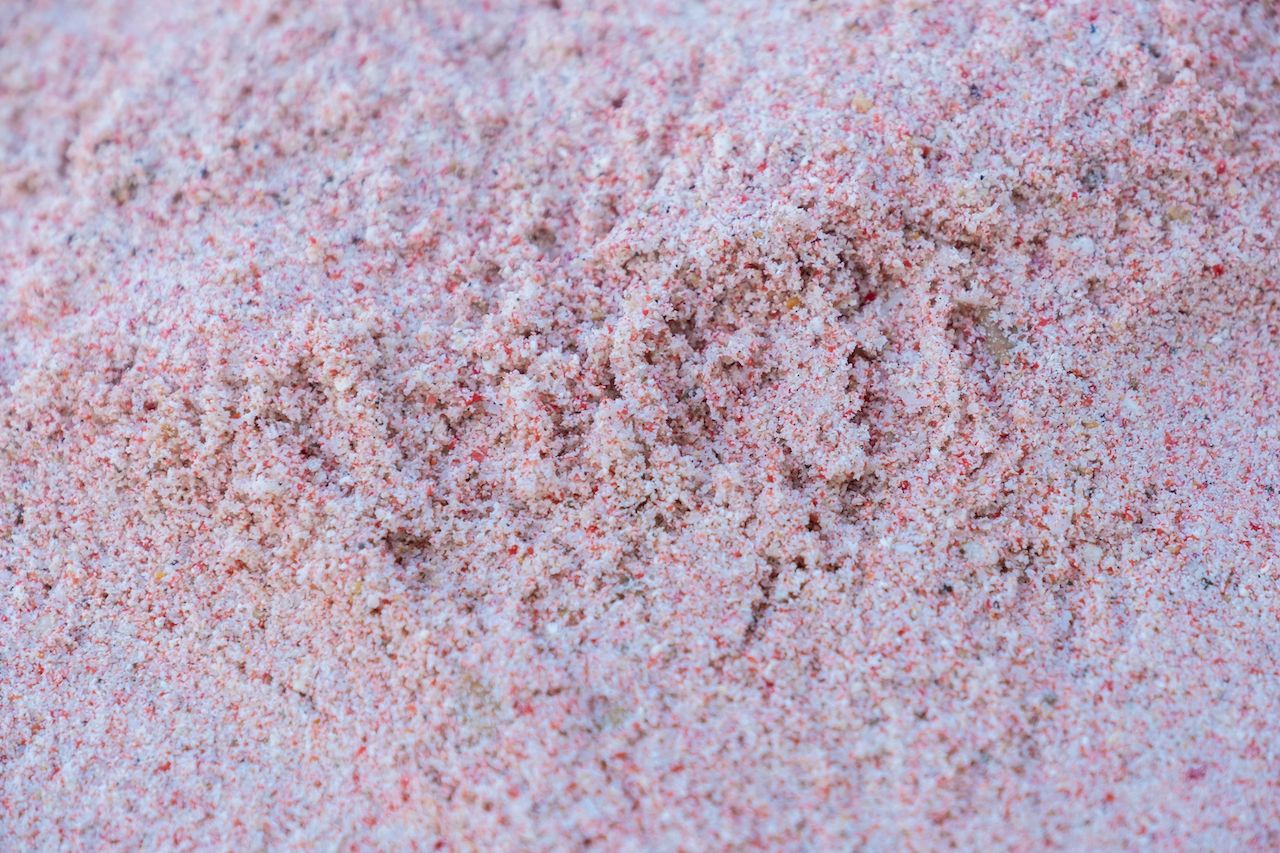 Sand is primarily made up of minerals from rocks, such as quartz and mica, that have eroded over time. It can also be composed of organic materials, such as coral and shells that have either been egested by fish who feed on corals or that have otherwise broken down over time. In places where there is, say, a lot of reddish rocks like garnet crystals, sand may be pinker in hue. In places like island atolls, sand is made entirely of broken down organic matter. If that organic matter contains organisms that are reddish in hue — like crimson-hued foraminifera, microscopic creatures that live on reefs — the sand that results will have an unmistakable rosy glow. Here are the most startlingly pink beaches in the world. 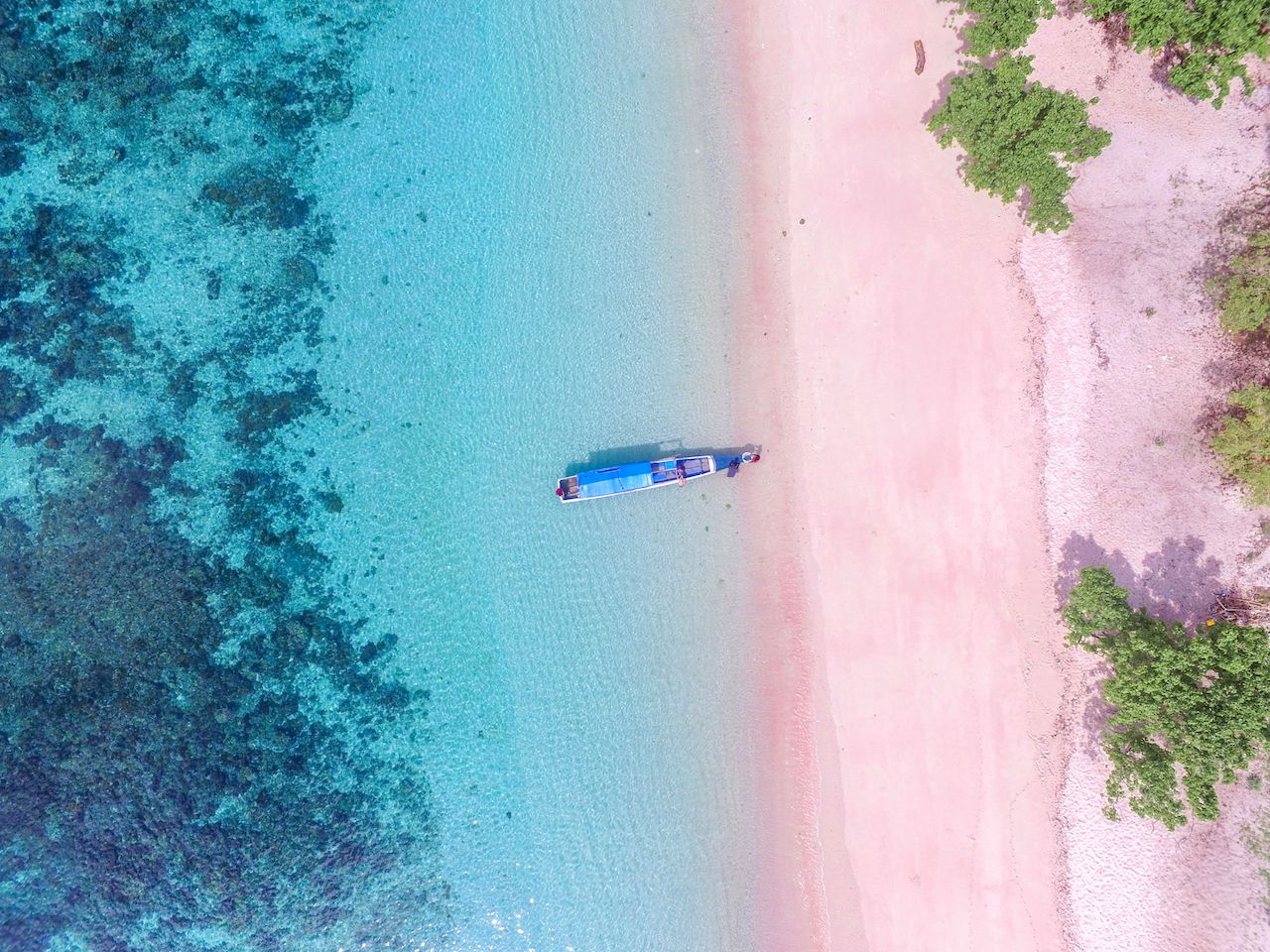 As if Indonesia’s Komodo Island wasn’t fascinating enough for its fearsome komodo dragons, the largest lizards on Earth, there is actually a lot more to appreciate there — from hiking and taking in incredible views of the ornately shaped islands here to jumping into its warm waters. And, of course, there is the incredible pink sand. Note that as Komodo Island is currently closed to visitors to preserve the komodo dragon population, there is another lovely pink-sand beach in Indonesia. 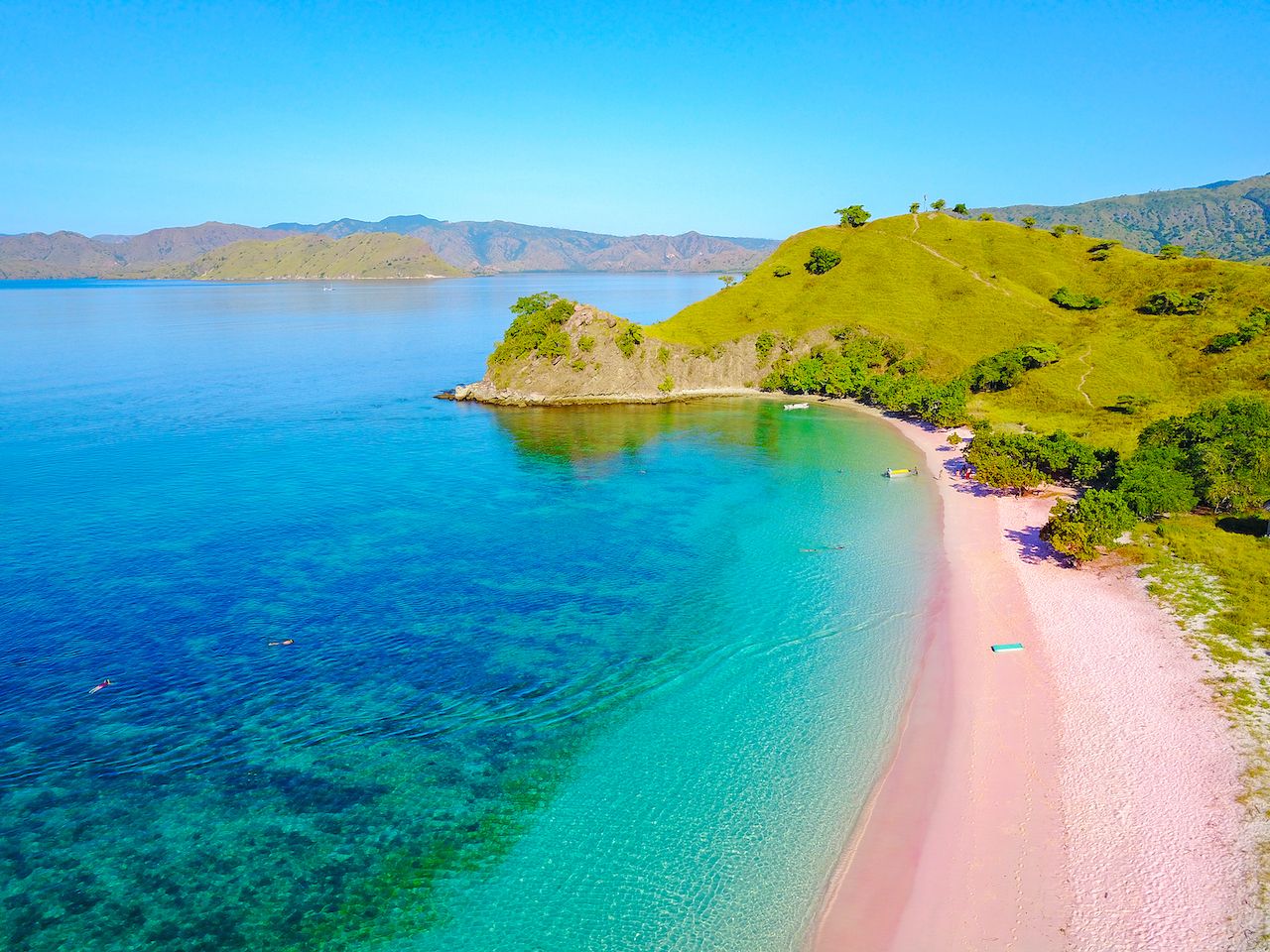 As if there weren’t enough exciting things to do in Lombok, Indonesia — from hiking Mount Rinjani to discovering rituals of the local Sasak culture, surfing, and finding your yoga flow — you can also set your eyes on one of the most wondrously pink-tinted beaches anywhere. Flores Beach, also known simply as Pink Beach, is on the southeast corner of the island and is also a super place to snorkel or scuba dive. Lombok Island is very close to Bali and can be reached from that island via a $16 five-hour ferry or a $25 puddle-jumper flight. 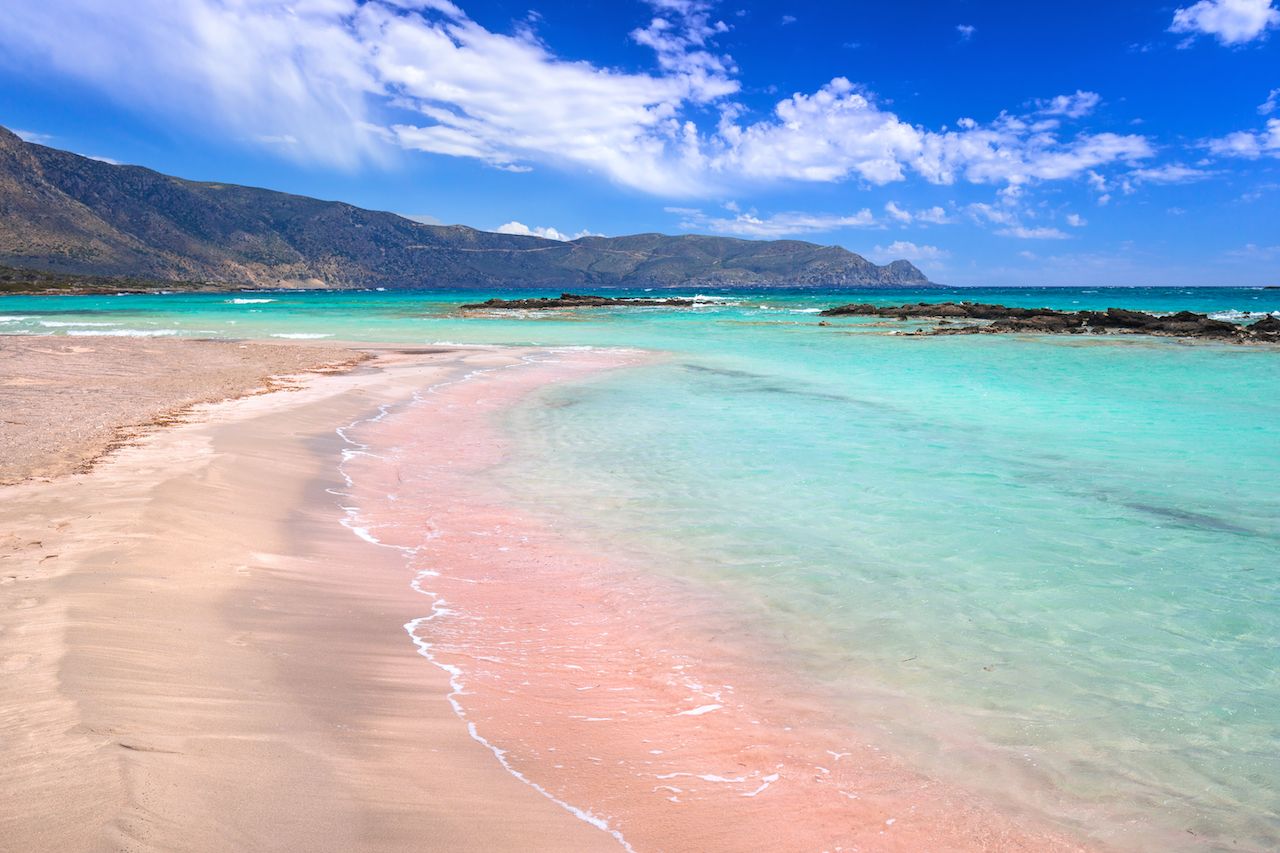 There’s a lot to love about Crete, from restaurants offering incredible fare washed down with local wines and stunning sea views to memorable hiking and ancient ruins everywhere you look. Of course, there are also the beaches, each one seemingly more appealing than the next. And then there is Elafonisi. As if the cove-shaped sandbar, crystalline turquoise water, and peaks rising in the distance weren’t enough, there is the sand itself. Over the eons, seashells here have broken down and turned the sand an irresistible shade of pink. 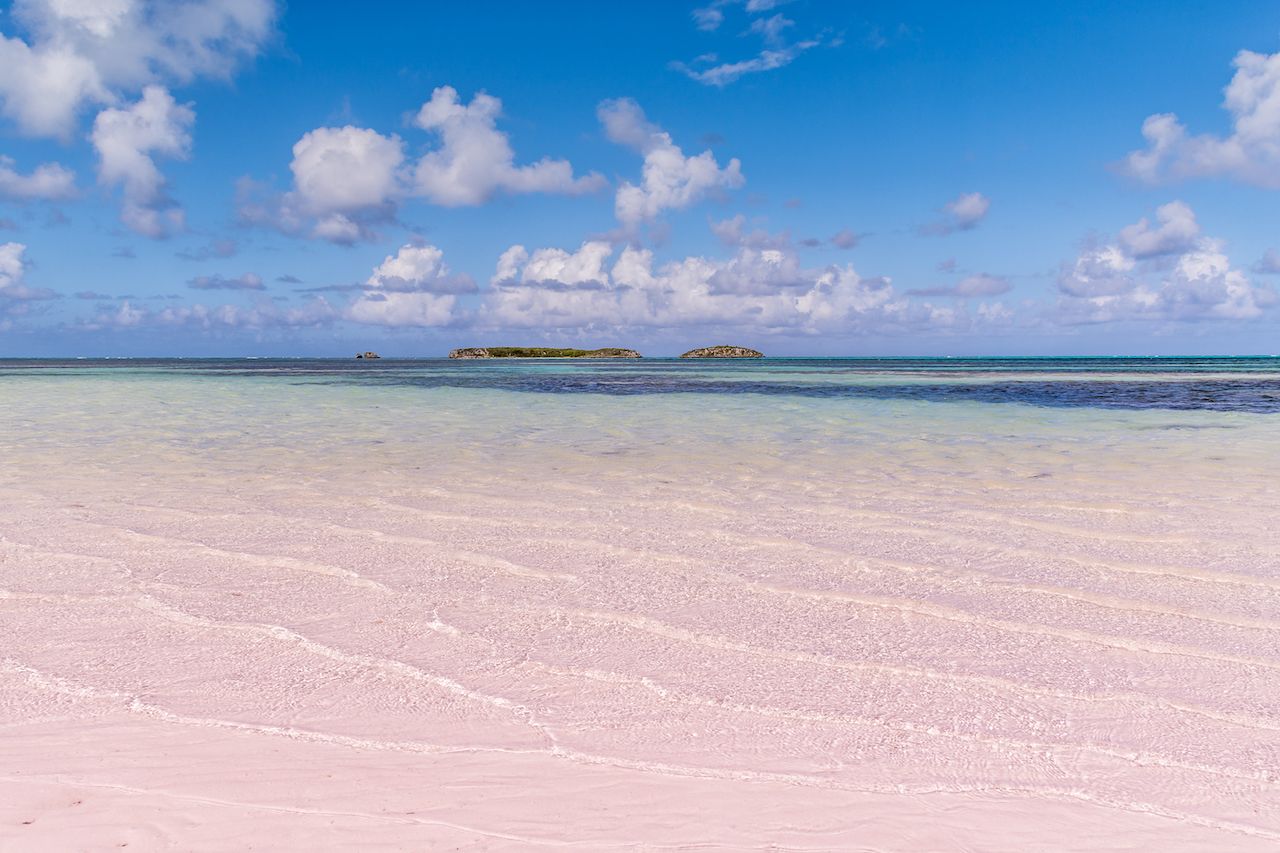 The blush of the sand in this island of the Bahamas is so tinted because of the foraminifera that live in its reefs. Pink Sands Beach is nearly three miles long, so you can take a leisurely stroll while admiring the hue. Alternatively, you could take a dip in the luxuriously warm ocean, snorkel, or just read a book on the dreamily toned sand. While Harbour Island is most famous for its pastel-hued sand, the island also has lovely cafes and shops to peruse after you’re done admiring the beach. 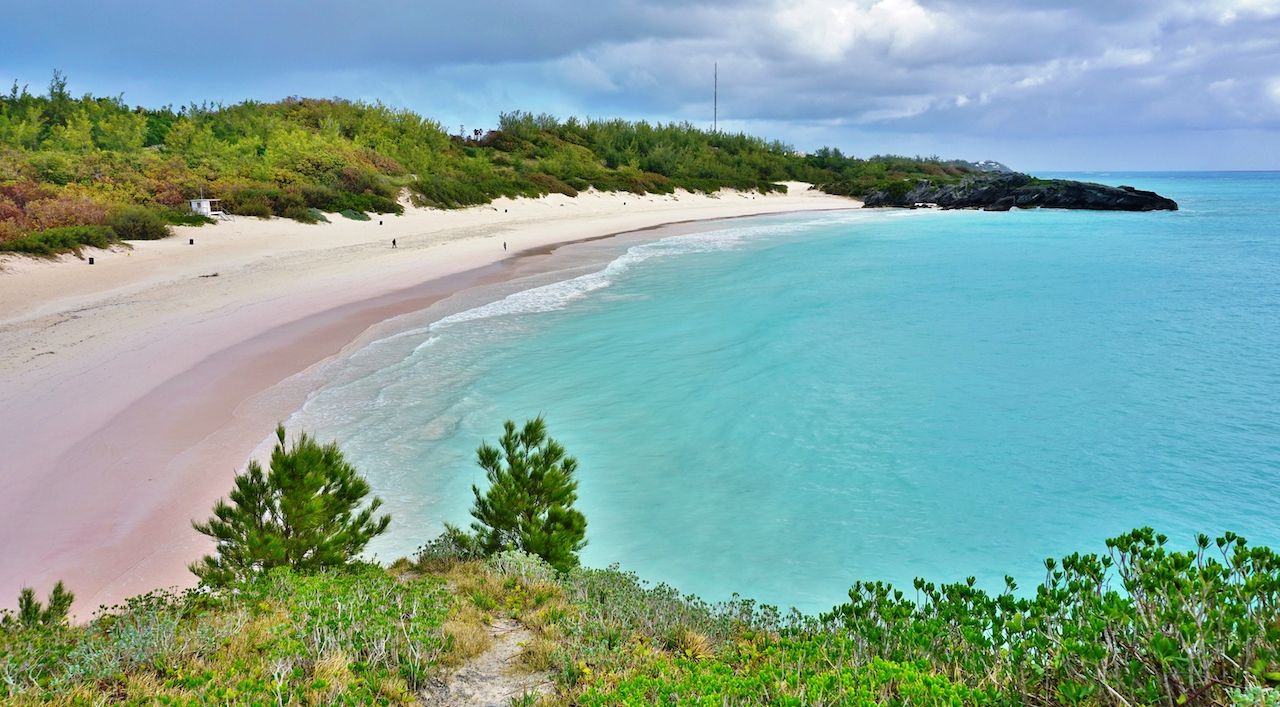 This tiny cove on the long, skinny island that is Bermuda is a pretty popular place. Bordered by green foliage on one side and a clear, blue ocean on the other, the pink of the sand is especially striking. You are never far from anything in Bermuda, and the beach is just a 20-minute drive from downtown. But that’s just one of the many things that make this isolated island in the Atlantic, nearly 1,800 miles off the mainland of the US, so remarkable. 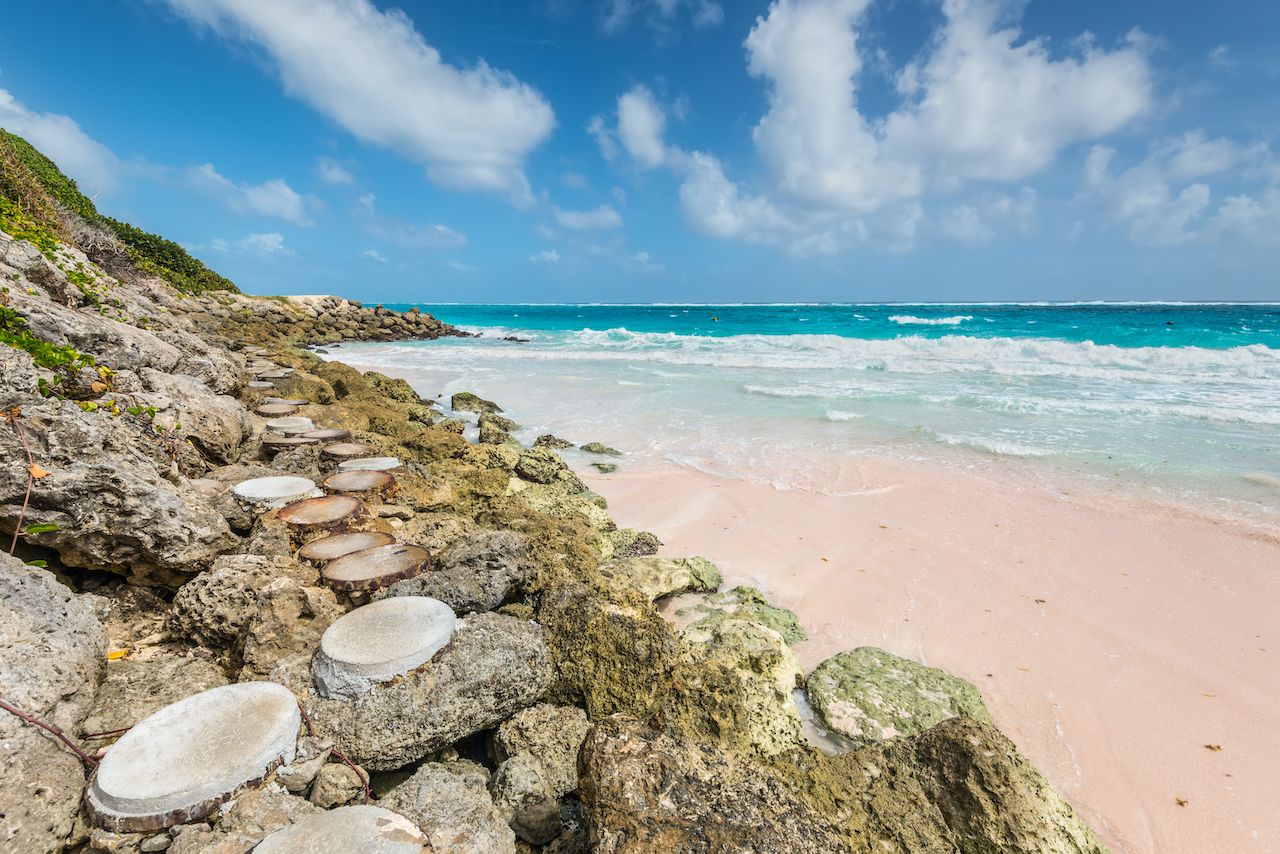 Maybe you’ve parked yourself in Barbados on a work visa as a digital nomad. You’ve surely gone hiking, snorkeling, surfing, and simply enjoyed the island lifestyle… while getting your work done, of course. Perhaps you’ve even learned something about its history as the birthplace of rum on its Barbados rum train. And surely you’ve headed to Crane Beach to admire its famous color. It’s on the southwest side of the island, so if you are an early riser, go at daybreak; the pink color will be like nothing else. 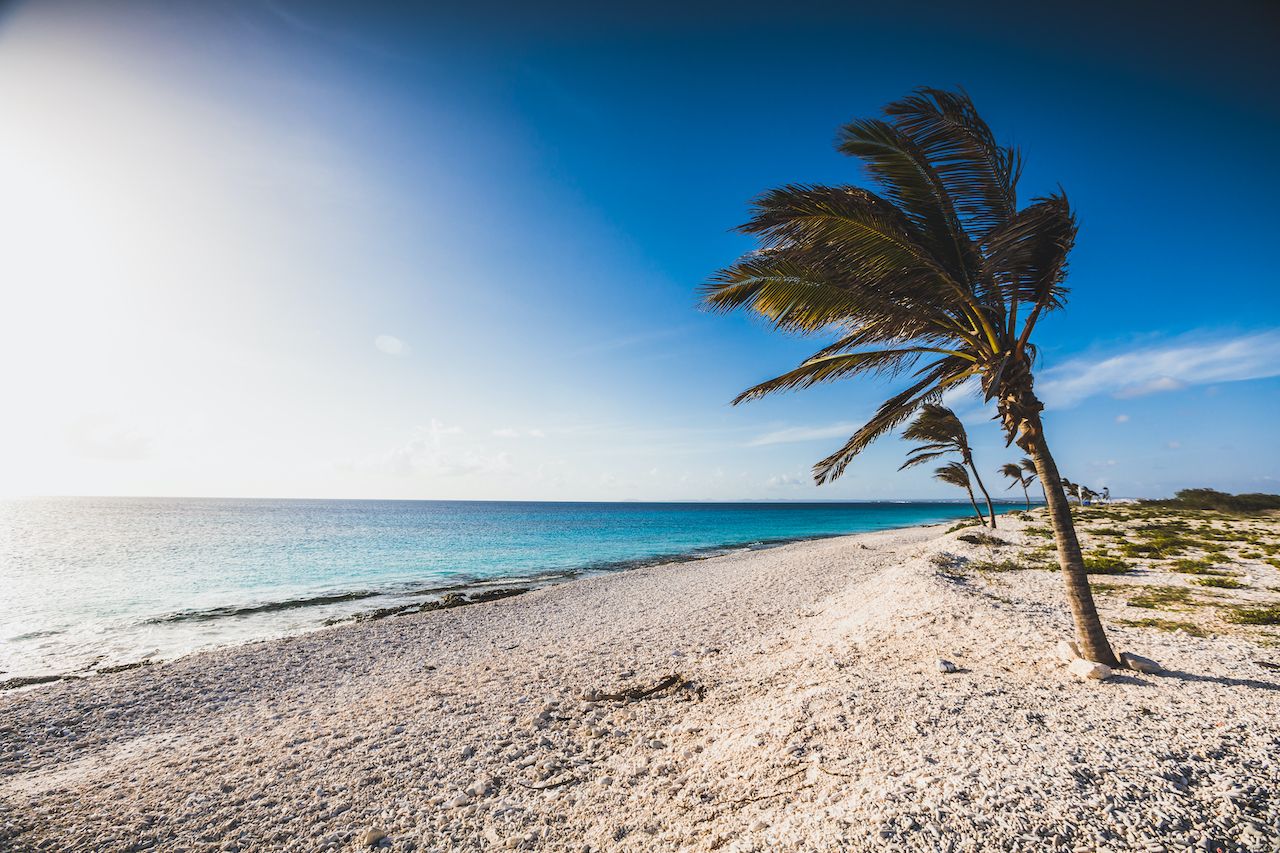 One of our favorite secluded beaches in the world, this strand on the Caribbean isle of Bonaire takes on a pastel pink hue when the sand gets wet. Bonaire is the little known “B” in the ABC Islands — Aruba and Curação being the better-known bookend letters. The three were all Dutch territories until recently; today, only Bonaire retains that status. While it’s much sleepier than its two neighbor islands, that pleasant sleepiness may be one reason its reefs are so well-preserved, making it a super place for scuba diving — but only after you’ve marveled at Pink Beach, of course. 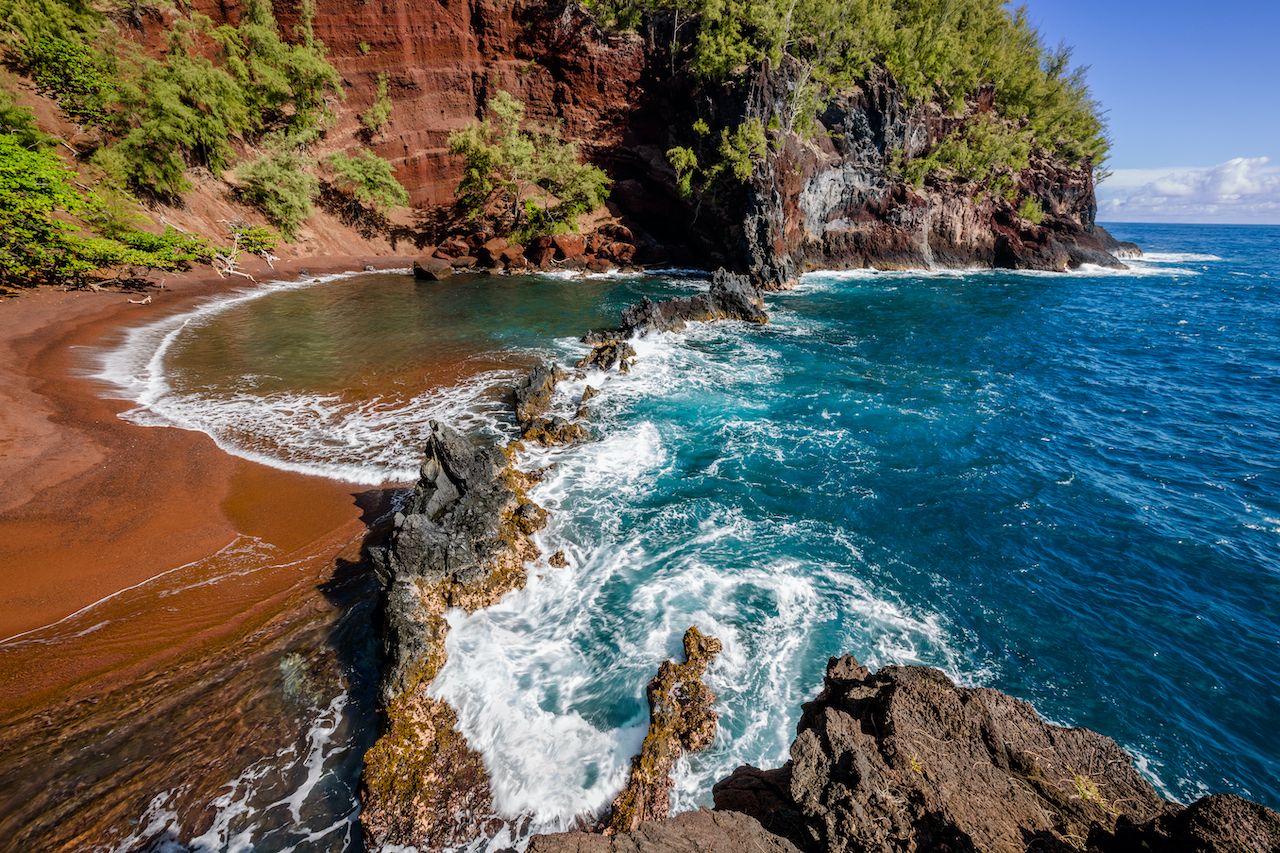 The coloring of this beach is made not by organisms in the sea but by the foundations of the Hawaiian islands themselves: lava. The same lava that can produce Hawaii’s famous black-sand beaches has also resulted in a red-sand beach on the island of Maui. This sand at Kaihalulu is rich in iron, which turns it a deep copper red. Kailalulu draws scores of visitors eager to see the natural phenomenon. However, getting here is very treacherous, as the trail is steep and slippery. Please be aware of the risks before you go.

You Can Take an Easy Day Trip To the Bahamas on This Florida Ferry
A Stunning New Resort Makes One of the Caribbean’s Least Visited Islands Instantly Accessible
6 Small, Lakeside Towns Within Easy Driving Distance From Chicago
The Best Jersey Shore Beaches for Every Type of Traveler
The 8 Best Nude Beaches in the Caribbean