Half of Portugal’s outline is defined by the ocean. Spain sits to the east and north, sharing the Iberian Peninsula, while Portugal’s southern and western borders make one long scenic string of Atlantic coastline. There’s no shortage of beaches along this ocean-facing edge, yet it’s the same few that get swamped summer after summer.

The Algarve, way down south, bears the brunt of this seasonal tourism while the beaches closest to Lisbon get their fair share of traffic, too. In between, Alentejo’s coast is starting to get the recognition it deserves, while the beachgoing crowds up north by Porto vary. Whichever area you decide to call home while in Portugal, these are the beaches you need to know about — because not everyone else does. 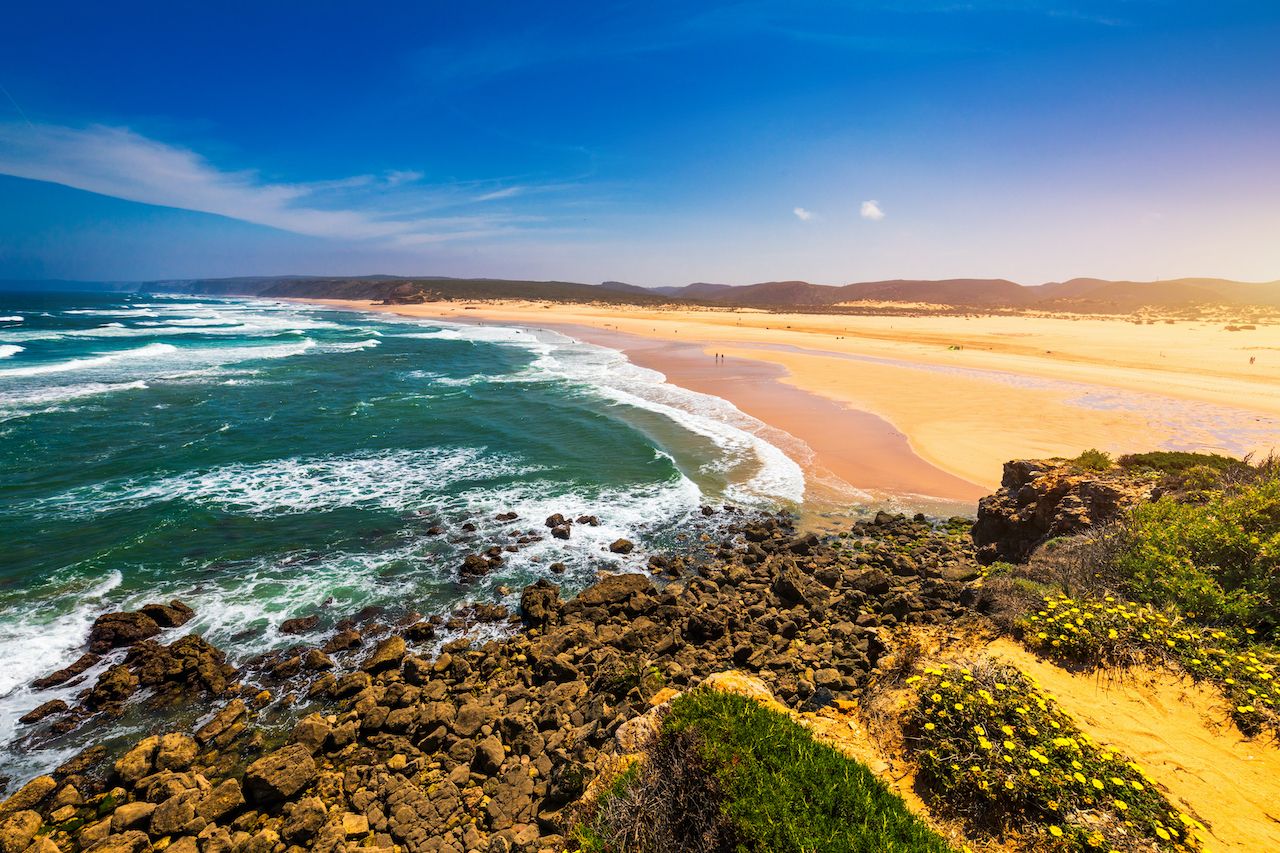 Praia da Bordeira: A few minutes from Carrapateira, a village on the Algarve’s west coast, Praia da Bordeira is framed by scenery from the Costa Vicentina natural park. It’s a wide-open beach that gets passed over by sunbathers, although it is a hit with surfers who seek out its wild waves. Coastal hikers also enjoy excursions to the Aljezur region’s beaches, including the roughly 45-minute hike south from Praia da Bordeira to Praia do Amado, which is even better known as a surfing beach that hosts international competitions.

Praia do Carvalho: Though small, Praia do Carvalho is surrounded by tall cliffs that give the beach a dramatic presence. It’s about 15 minutes south from Lagoa, a quiet town nestled between the Algarve’s most crowded destinations. Praia do Carvalho is rarely empty during summer, attracting cliff jumpers and snorkelers who live nearby, but it is one of the few beaches located between Lagos and Faro that has manageable crowds when the weather heats up. 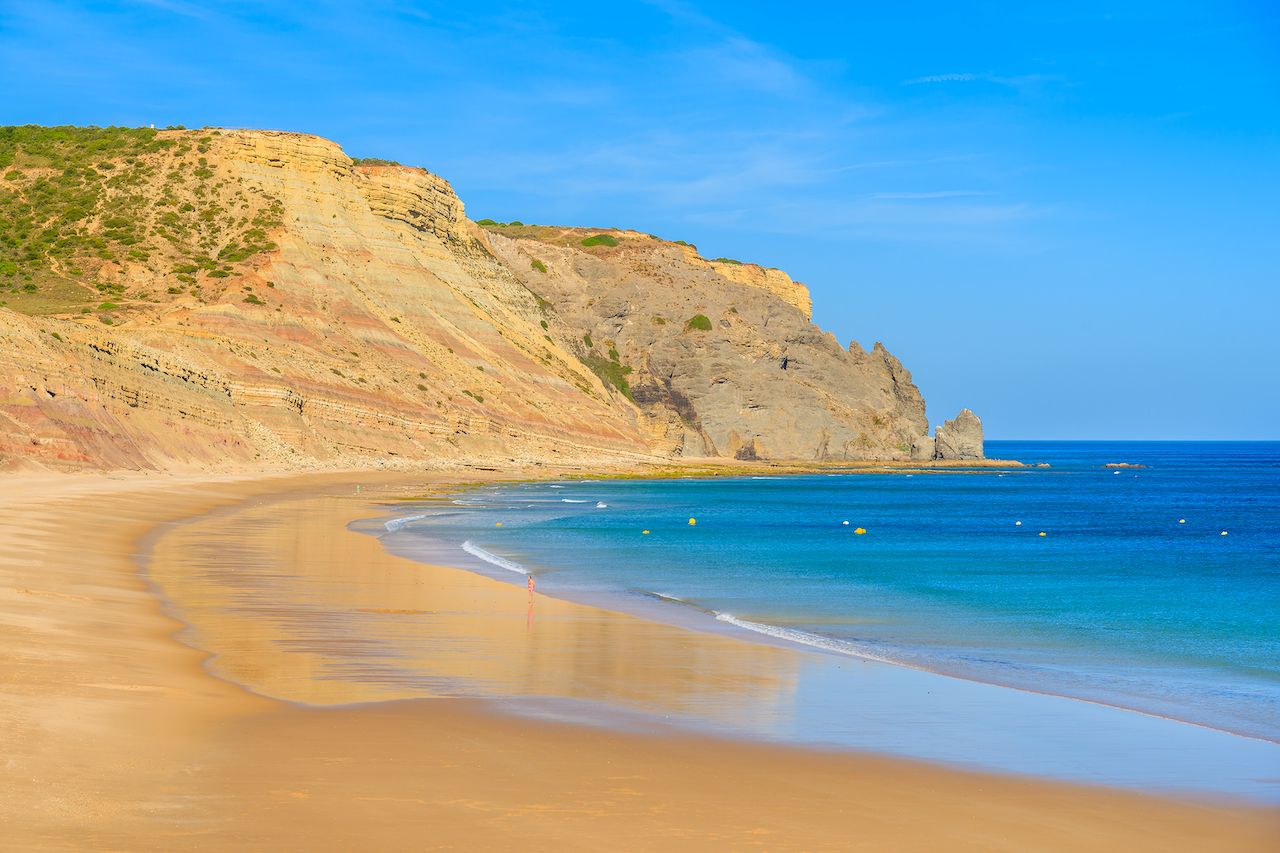 Praia da Salema: Salema is a small, secluded fishing village. It sits midway between Lagos, one of the Algarve’s busiest beach resorts, and Sagres, the region’s southwesternmost point. Praia da Salema is a half-mile-long Blue Flag beach, meaning it’s clean, clear, and swimmable for all ages. It stays calmer than most beaches in the Algarve but is not devoid of activity: Fishermen hoist their boats ashore, selling their catches to waterfront restaurants. Families pitch umbrellas in the sand. Lifeguards monitor the beach all summer. And some even venture into the overlooking cliffs to track down the dinosaur footprints discovered there. 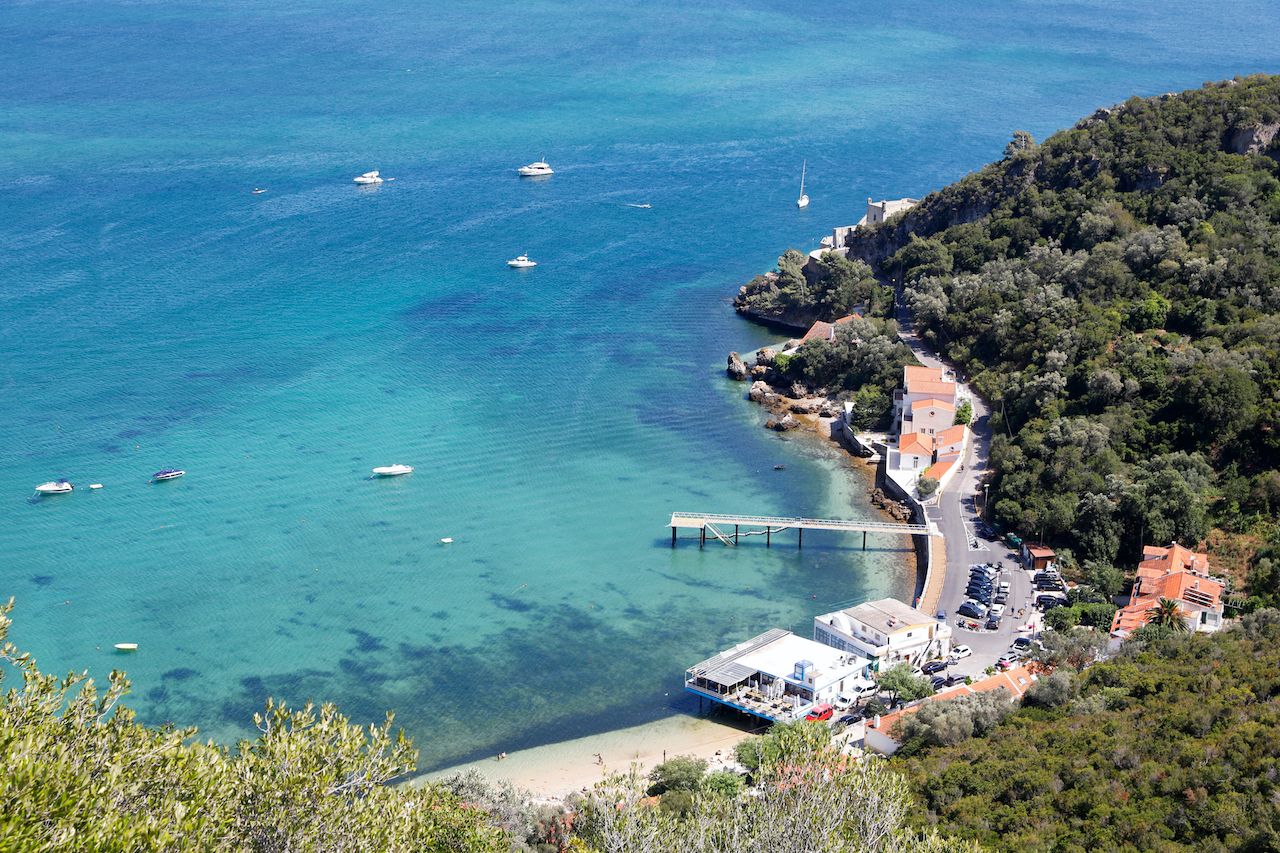 Praia do Portinho da Arrábida: Across the Tagus from Lisbon is the South Bay, home to the gorgeous Arrábida Natural Park. Located within the park near the fishing village of Setubal, Praia do Portinho da Arrábida is a small beach that’s able to remain relatively quiet as it’s not accessible by public transportation. Come to swim, snorkel, or even scuba dive. Then, fill up on fresh seafood and hike around Arrábida. There are other beaches to discover, including Praia dos Galapinhos, as well as other secluded sunny spots to enjoy an outdoor day.

Praia do Guincho: After Sintra, Cascais is the side trip most visitors to Lisbon are encouraged to take. The stretch between them belongs to the Sintra-Cascais Natural Park, where you’ll find Praia do Guincho on the west end, just a few miles outside Cascais. It’s a well-known beach, having hosted several surfing, windsurfing, and bodyboarding competitions over the years, as well as appearing in 1969’s Bond film On Her Majesty’s Secret Service. Far from a secret, this beach still manages to keep crowding to a minimum, attracting mostly water sports enthusiasts. 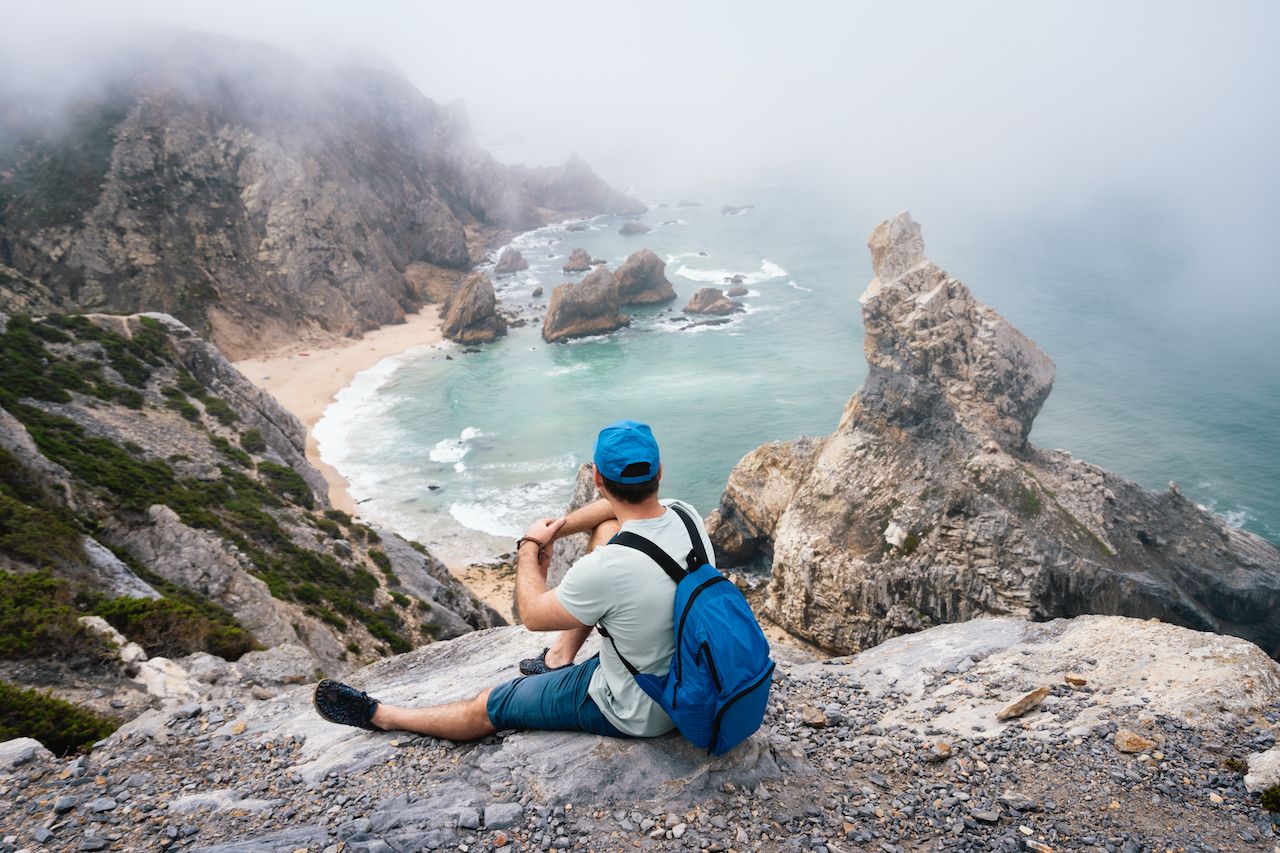 Praia da Ursa: The minute you touch down in Lisbon, you’ll start getting recommendations for a day trip to Sintra. The picture-perfect town is located about an hour west by train, close to the coast and Cabo da Roca, mainland Europe’s westernmost point. Praia da Ursa is a stone’s throw from Cabo da Roca, though it’s not nearly as easy to access. Beachgoers have to strap on their hiking boots and scramble down a steep, winding dirt path to reach the beach. There, however, they’re rewarded with a quiet cove and beautiful views of the Atlantic. Note that due to its seclusion, rumor has it that some treat Praia da Ursa as an unofficial naturist beach.

Praia de Moreiró: About a half hour’s drive north of Porto, Praia de Moreiró strikes a nice balance between being lively and lowkey. Tourists have yet to descend on the rural beach though it is a popular choice among families. There’s not a lot in the way of amenities, but there is a beach bar on one end that’ll keep you fed, relaxed, and with a drink in hand. You’ll be able to rent an umbrella on the north side, but venture south, and you’ll find a cluster of rocks that create a border and typically attract fewer sunbathers. Set up there for more peace and privacy. 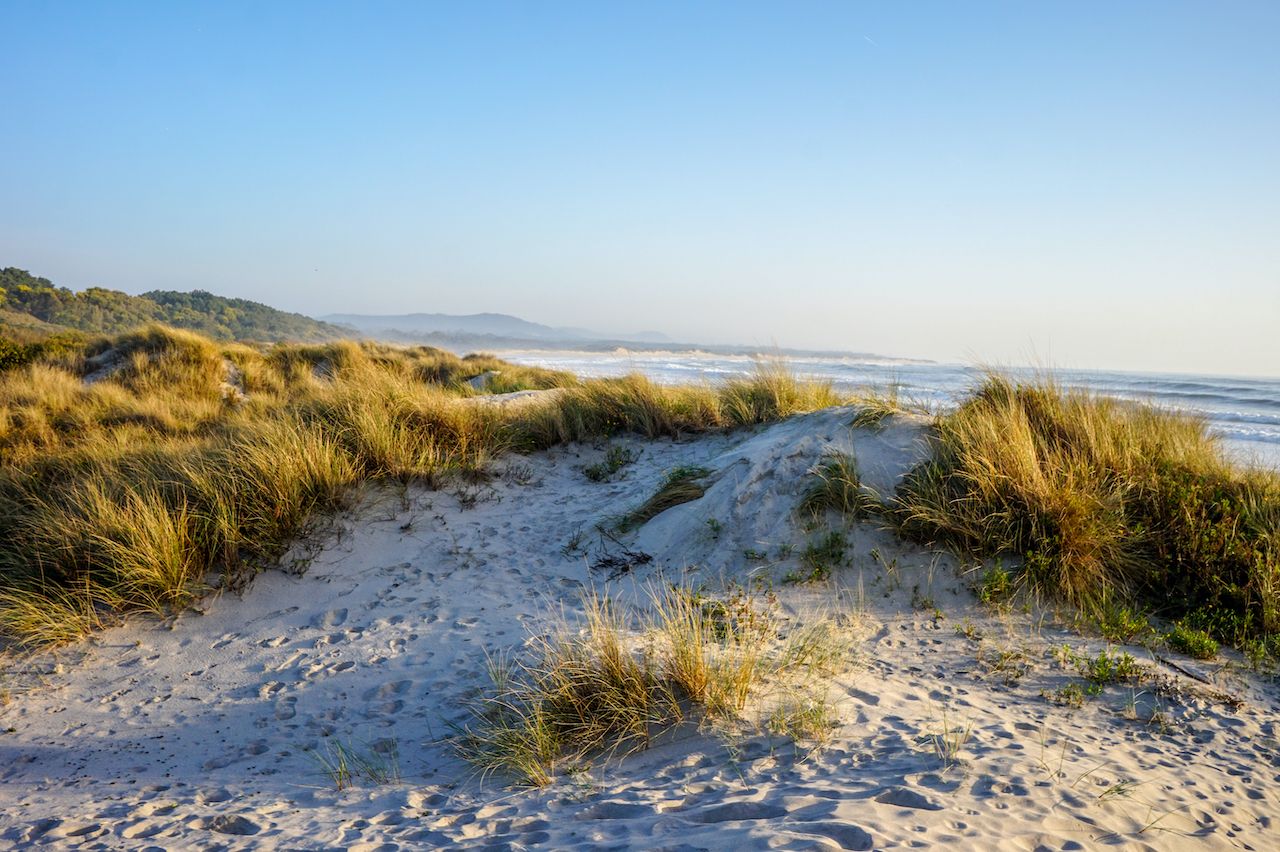 Praia do Cabedelo: The farther north you travel in Portugal, the less likely you are to run into other travelers. Some of the wildest, most remote landscapes are located up north, easily reached by car from Porto. Praia do Cabedelo is one example. The beach is about an hour from Porto in Viana do Castelo, one of the loveliest cities in the Minho province. It begins just across the Lima River and is closed in by sand dunes and pine forests. Join the beach’s dedicated surfers or look into nearby campsites if you’re in the mood for a quiet, nature-filled weekend away. And, before you go, be sure to check out neighboring Praia de Luz Mar, too. 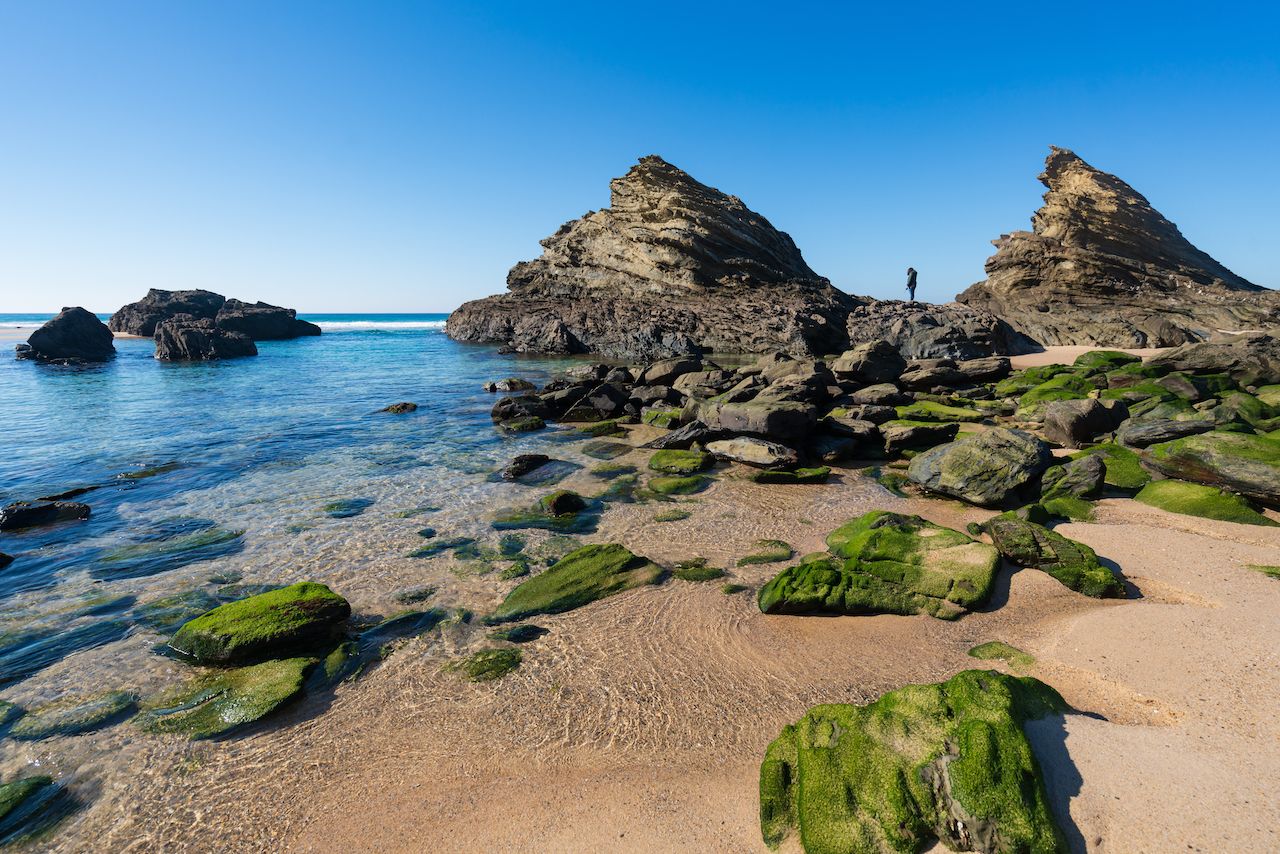 Praia da Samoqueira: Not far from Porto Covo, which loosely neighbors Vila Nova de Milfontes between Lisbon and Lagos, Praia da Samoqueira was made for adventurers. It’s full of rocks to climb, hidden coves and caverns to discover, and tide pools well worth poking around. There’s more than enough sand to lay out a few towels, though you won’t have the shore to yourself as this is a local-favorite beach. Hike around the area to soak up the Alentejo’s rugged scenery, and don’t leave until you’ve found Praia da Samoqueira’s very own waterfall.

Praia da Franquia: Praia da Franquia stretches out near Vila Nova de Milftones, a popular resort on the Alentajan coast. It’s a relatively busy area by Alentejo’s standards, but this is one of the quieter beaches, owing to its position on the banks of the Mira River. The lazy pace makes it a perfect spot for SUPs and canoes, as well as a top choice for families. Keep an eye on the tide, though, as the beach can feel somewhat crowded when water inches up the shore. 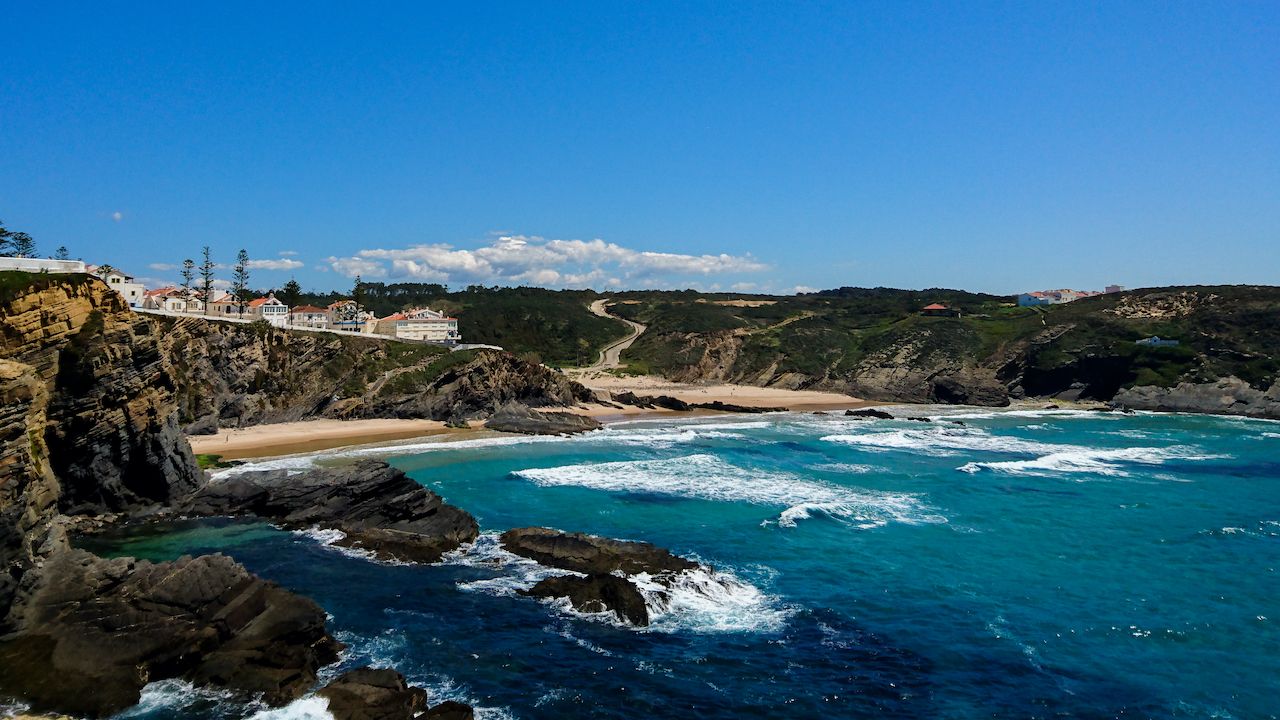 Praia da Zambujeira do Mar: Access to both the coast and countryside are among the best reasons to fit Alentejo into your itinerary. Zambujeira do Mar is a small seaside town situated within southwest Alentejo and St. Vincent Coast Nature Park, which encompasses the best of both. Its namesake beach is Blue Flag certified and great for surfers looking to avoid long lineups. The beach’s clear waters and high-rise cliffs are no secret to Alentejo residents, but like much of the region, it stays free and clear of most tourists all summer long.

Travel7 Perfect Portuguese Towns That’ll Make You Forget All About Lisbon
Tagged
Beaches and Islands Portugal
What did you think of this story?
Meh
Good
Awesome

Portugal Is Reopening To Tourists From These Countries, Without a Two-Week Quarantine

Everything You Need To Know About Visiting Portugal This Summer