Barbados is considered to be the birthplace of modern rum. The first commercial sugarcane crop was planted in 1640, but before that, settlers grew sugarcane on a small scale to make kill-devil, a precursor to rum with a name that references its harsh alcoholic burn. Suffice to say, the category has come a long way.

A new rum train excursion through the sugarcane fields of a farm-to-bottle distillery shows visitors just how far Barbados rum is from its kill-devil past. The train’s place in the fields is important, because those fields are the foundation for a spirit that’s intrinsically linked with the Caribbean islands.

The rum train, called the St. Nicholas Abbey Heritage Railway, is operated by the St. Nicholas Abbey Great House Plantation and Distillery, which is located in Saint Peter Parish. The train is a restored Badger locomotive that was formerly used in the steel and coal industry in the UK. The original purpose for the train, said Anna Warren, who owns the railway, Plantation House, and the distillery with her husband Larry, was to “compliment our original intent for the property without destroying the ambience of the place, which has always been our paramount concern.”

The 400-acre property has a history that dates back 350 years, with a pedigree that makes it worthy of measured and careful preservation. The Warrens purchased it in 2006 and have meticulously restored its different parts over time, including the Great House, rum tasting area, bottling plant (formerly the overseers’ quarters), steam mill, and distillery. They’ve also brought back sugarcane production for their rum, taking the initiative to hand cut and grind the stalks before pasteurizing the pressed cane juice into a syrup to be used for the brand’s single cask unblended rum. 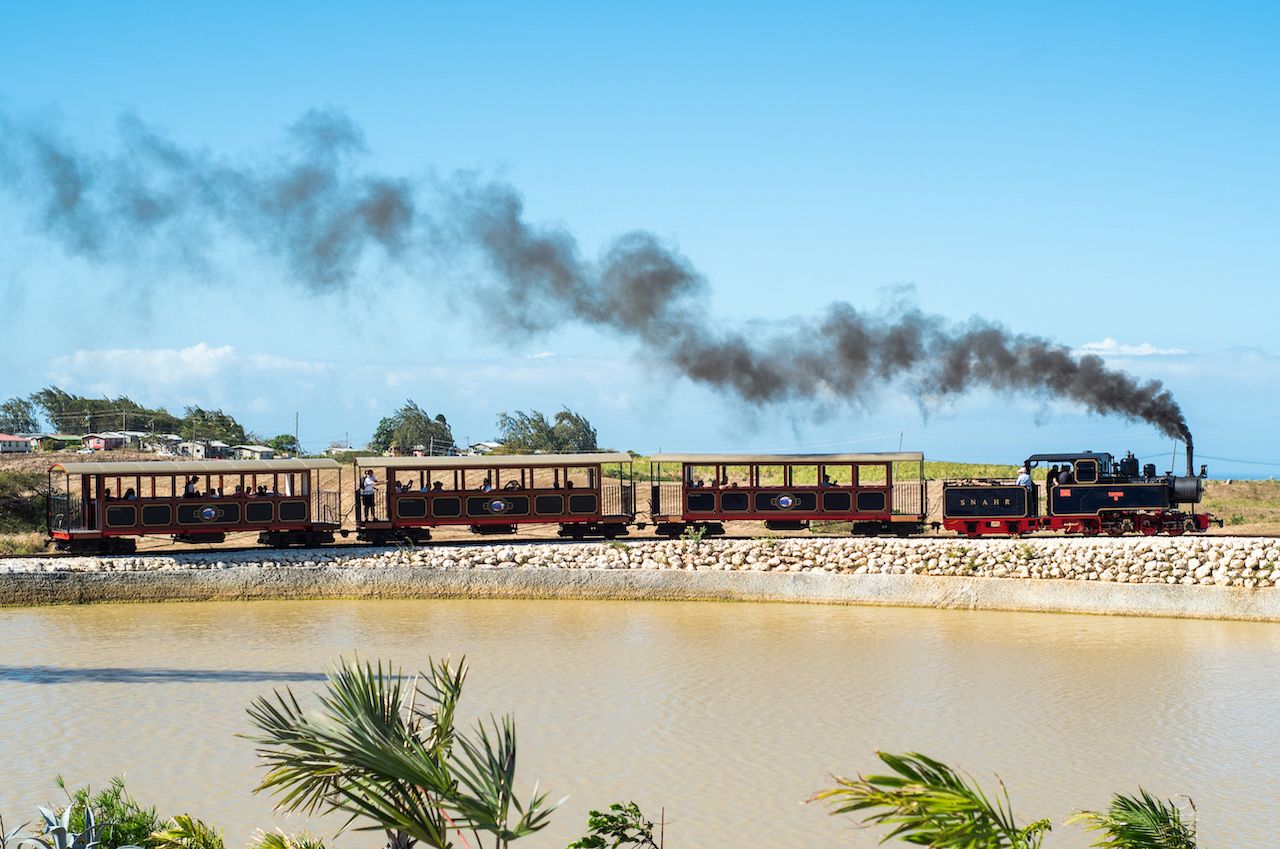 The idea for the rum train railway came from the Warrens’ son, Simon. The tour lasts about an hour, and includes an introduction on the train’s history. “The ride traverses in front of the Abbey, around a lake [and] through the abandoned limestone quarry with 40-foot cuts up to the Atlantic view at Cherry Tree Hill,” said Anna. Along the way, riders see plantation fields, villages, and cane fields up to the north. Concerns about fires from the diesel-fueled engine led the Warrens to remove a few fields that were particularly close to the tracks, but there’s still plenty to see. As the locomotive switches directions by way of a turntable, visitors can either remain on the train or step off for a photo opp before it retraces its steps. After visitors return to the Abbey, they can choose to stay on the property to tour the Great House and taste the rum. This is the best chance to get a sip, as you can’t bring food or drink on the ride. A train ride costs $30 per adult, and the ride plus the tour and tasting is $45.

The owners collaborated with master distiller Richard Seale of R.L. Seale and
Foursquare Rum Distillery (also on Barbados) for the St. Nicholas Abbey portfolio of rums. The flagship expression is produced in a pot still and is matured 18 years in oak casks that were previously used for bourbon. It’s hand-bottled straight from the barrel at cask strength in a glass decanter with an etched image of the Great House, and then sealed with a mahogany-capped cork topped with embossed leather, an homage to the first mahogany trees planted on Cherry Tree Hill more than 250 years ago. The label is also added by hand, and each bottle is denoted with a number and date. 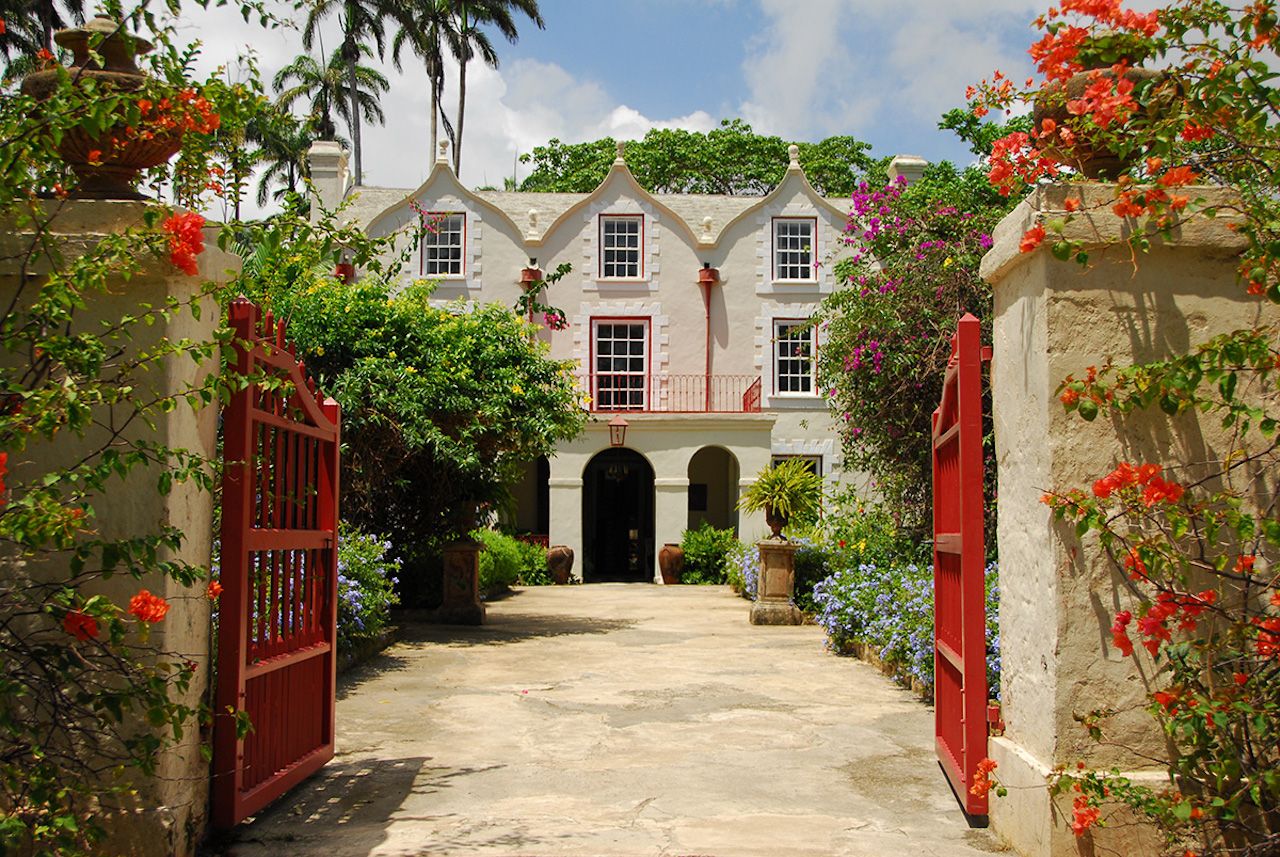 There has been a rise in interest in trains and boozy trains over the past decade. There are tequila trains, beer trains, and wine trains. None, however, combine spirits, trains, and farm-to-bottle booze like the Barbados rum train. It’s an event that appeals to rum fans as well as anyone loco for locomotives.

“Train enthusiasts marvel at the steam train circa 1914 and its history and workings,” said Anna. “And visitors enjoy the combination of heritage and the hand-done operation of our rum, ‘cane field to cask to bottle’ — almost unheard of in the world of alcohol these days!”