View all travel news
Top Destinations
Top CitiesView All Destinations
Trending Regions
Trending Cities
Load More
Heliskiing in Alaska can be as dangerous as it is spectacular, but with the right guide, it’s something every skier/rider should put on their list.

ALASKA OFFERS MANY different destinations and outfitters for heliskiing trips. I flew with Southeast Alaska Backcountry Adventures (SEABA) out of Haines. Located about 90 miles Northwest of Juneau, Haines is considered one of the up-and-coming destinations for big mountain freeskiing and riding. The 2,000-person town can only be reached by plane or ferry and is situated at the foot of both the Chilkat and Fairweather Mountain Ranges, which, together, form some of the most insane ski terrain in the world. For adrenaline junkies, Haines has all you can handle, but it can be dangerous and it’s important to go with the best guides available. SEABA proved to me during my visit that safety is their first priority and that they can make skiing even the most challenging terrain, an safe experience for any rider. 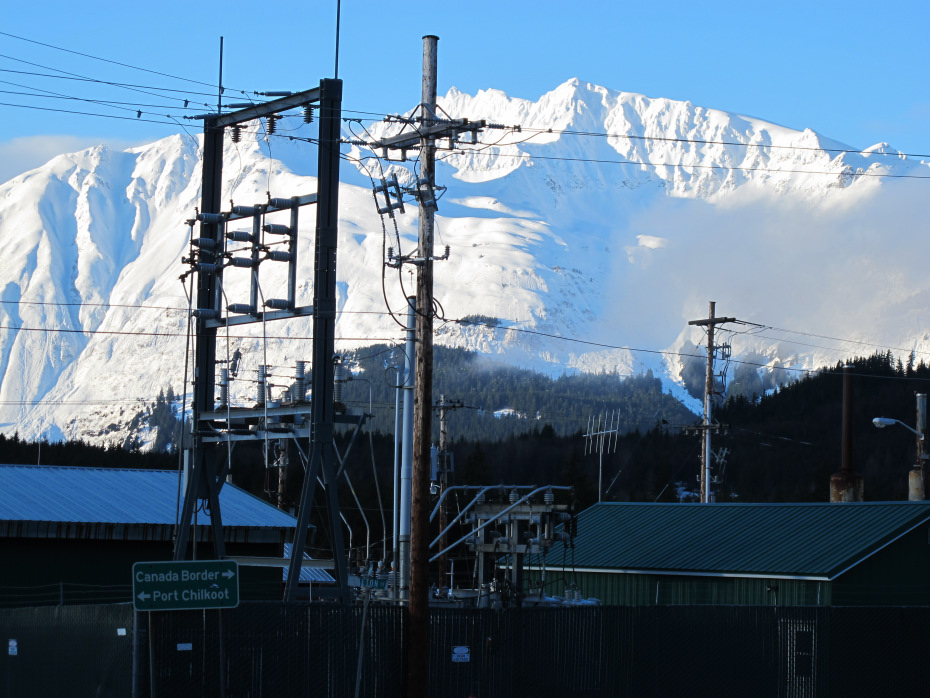 The only downside to heliskiing is that the weather has to cooperate for the bird to fly. After waiting through three days of low pressure systems puking rain and snow, we awoke to this perfect day and rushed with our guide to the helipad at the Haines airport. This was my first look at these mountains and I had been in AK for almost 5 days. 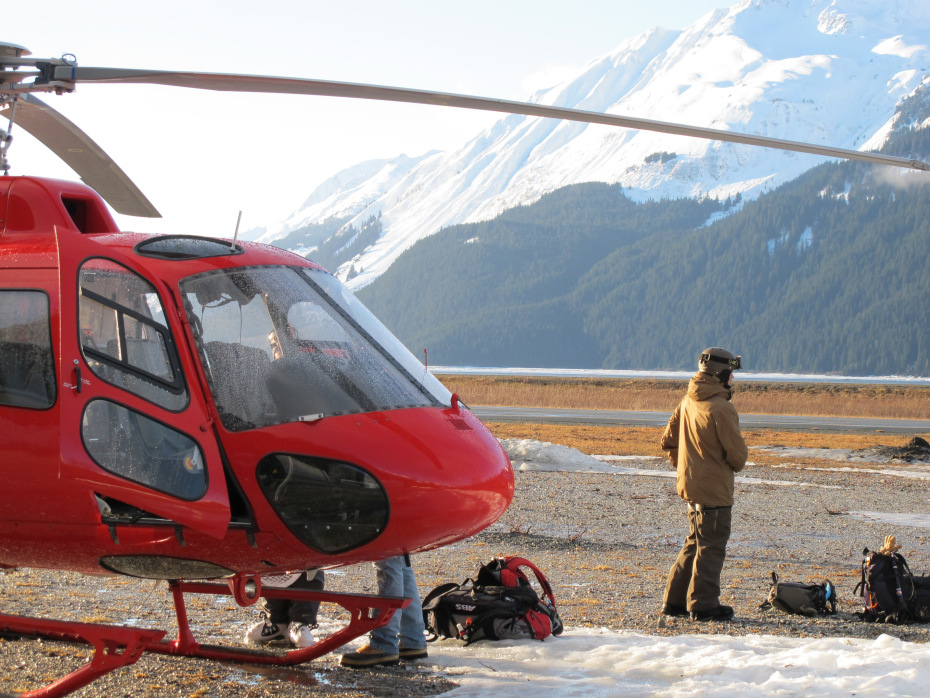 Heliskiing is a very gear intensive sport. In addition to ski gear, every rider is required to wear a climbing harness (since cravasses are a danger on the glaciated terrain) and full avalanche gear (backpack, beacon, probe, and shovel). I hadn't brought a harness but SEABA provided me withe the gear I was missing. They put everyone on a scale before takeoff so the pilot knows how much weight he's flying with -- I tipped the scales to 230 lbs with all my gear. 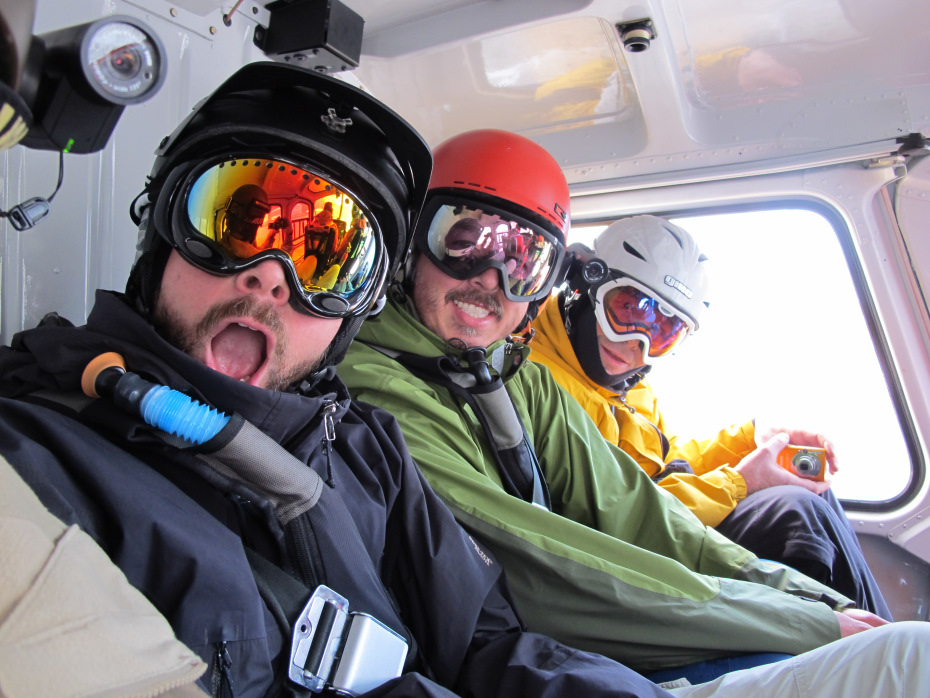 I had the pleasure of flying and riding with three very experienced backcountry riders from Durango, CO. Backcountry riding of any kind is a team sport and it's critical that everyone trusts everyone else. John, Mike and Greg were great dudes to be with, and showed me the ropes on my first heli experience. 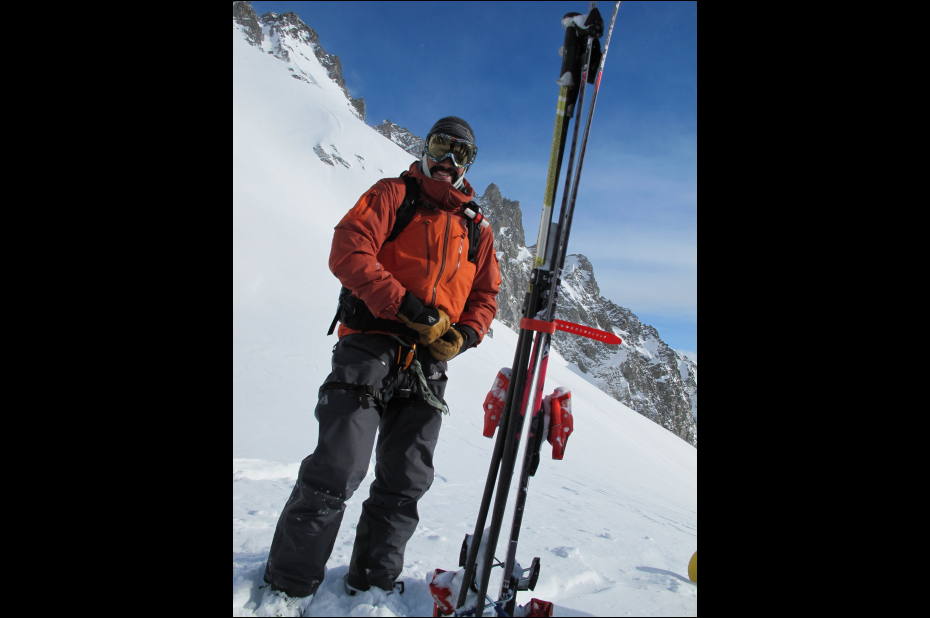 The most important thing to have with you in the Alaska backcountry is an experienced guide, and we were all glad we had been paired with Tom. After more than a decade guiding, Tom is a ninja of snow science and a beast of a skier. He's also a really nice guy and has the kind of laugh that could only belong to someone who heliskis for a living. 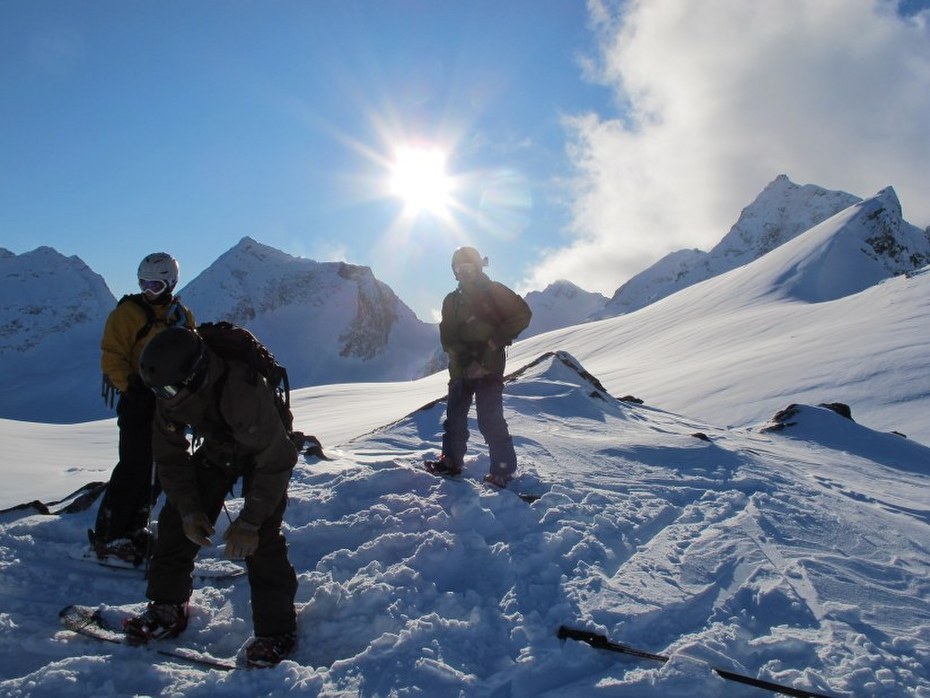 Given the snow conditions, which the SEABA guides anticipated to be be potentially high for avalanche danger, Tom started us off on a moderately steep run and went out in the field cautiously to inspect what conditions were like. 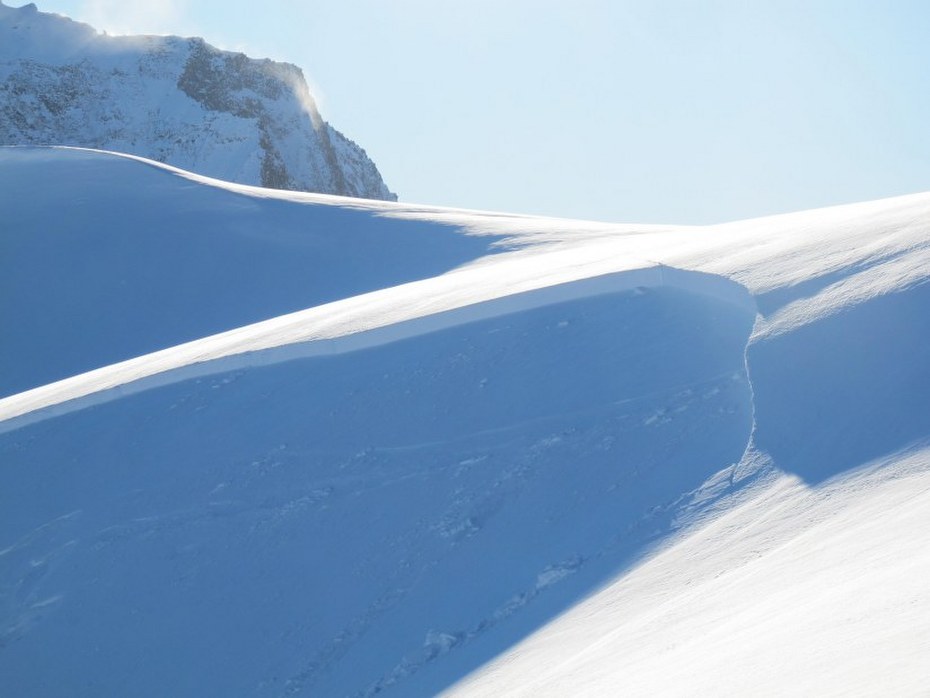 In the first five minutes of skiing, Tom, leading our group, set off a decent-sized avalanche. He was especially concerned because he was still 80 feet above the crown when the slide broke. This particular avalanche triggered other slides on its way down the valley, which in turn, made the run safe to ski. 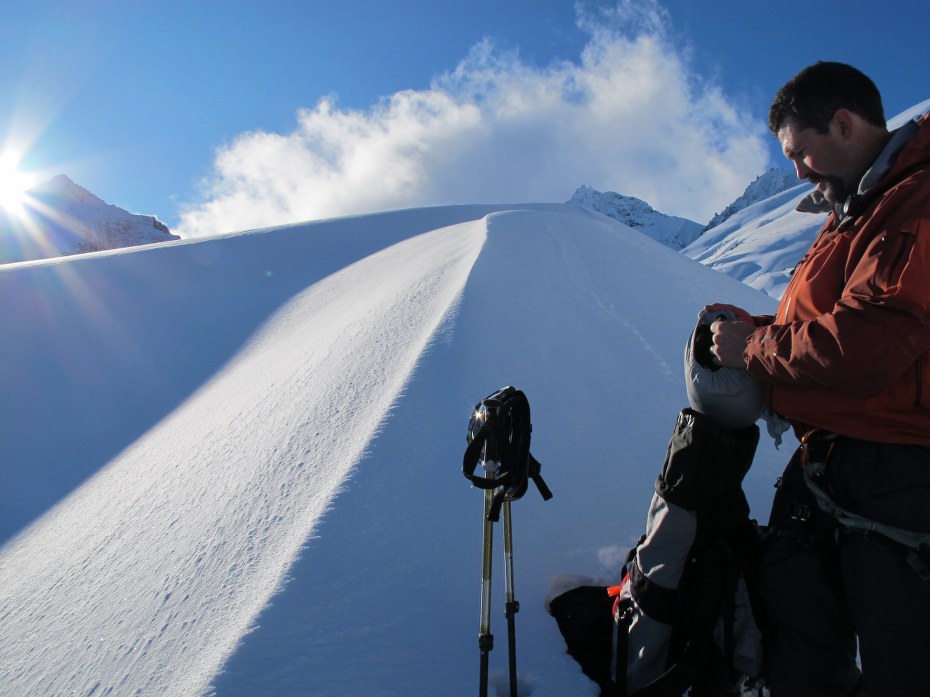 Safely at the bottom of the run, near the heli landing point, Tom is seen here about to record where the slide was and how it broke off. The specifics of every avalanche are recorded so that the SEABA guides can document the snowpack and monitor the ever-changing conditions. 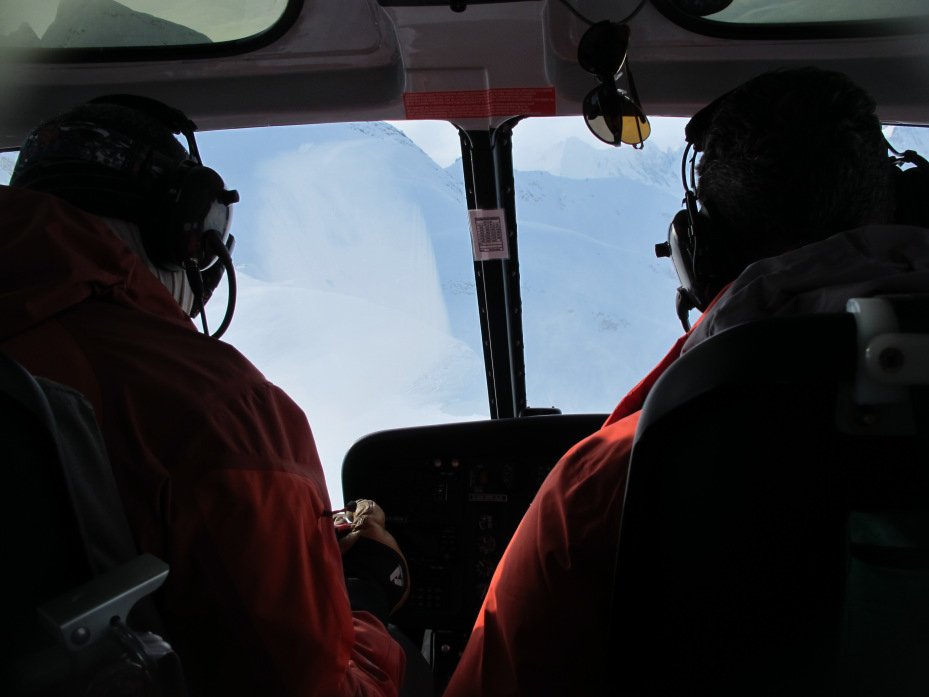 Towards the middle of the day, Tom spotted a small landing zone that he wanted to put us on. Our ninja heli pilot, Steve, was able to hold the heli steady while we exited and Tom unloaded the gear. Being left on that ridge--and digging out a larger landing area for the heli to perch on in future runs--was one of the most exhilarating experiences of the day. 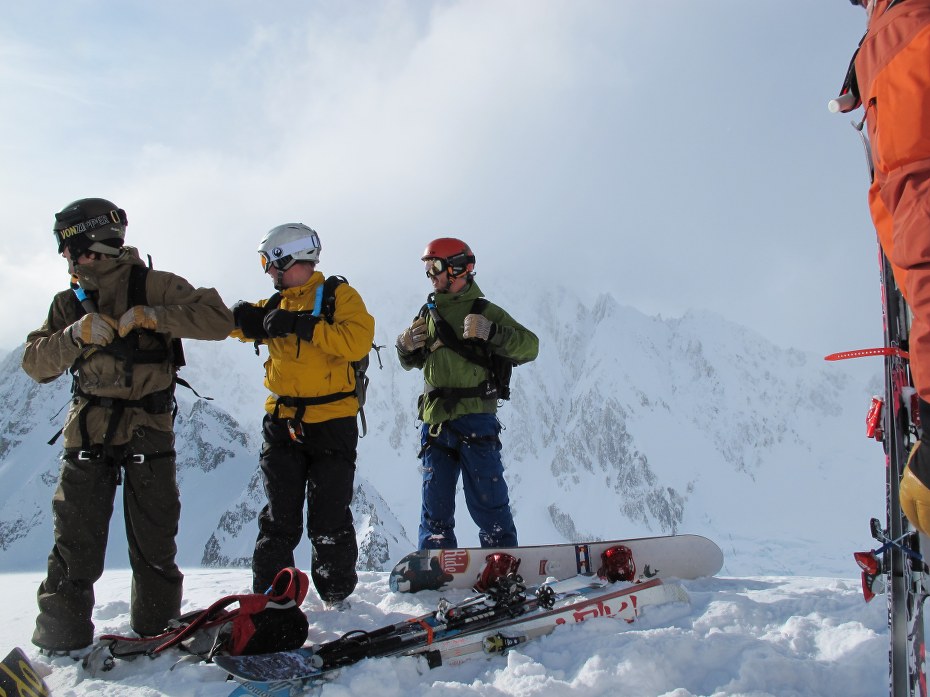 Tom recognized the precarious snow conditions early on and reiterated that snow safety was our number one priority for the day. 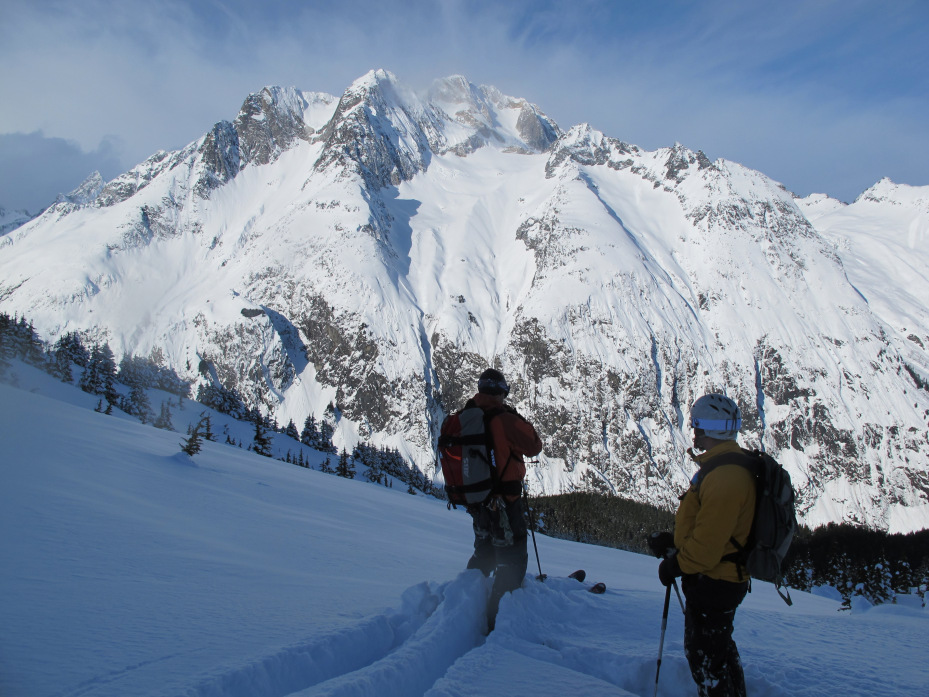 Towards the bottom of each 3500+ vertical foot run we would enter glades of trees in the shade of the peaks above us. 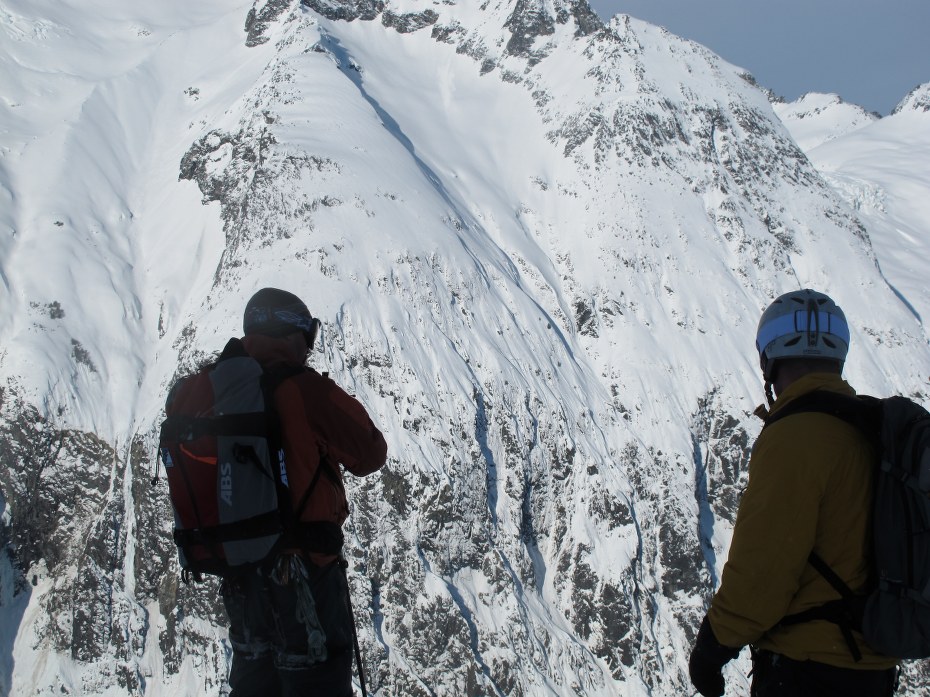 Alaska has a way of making you feel really, really small. 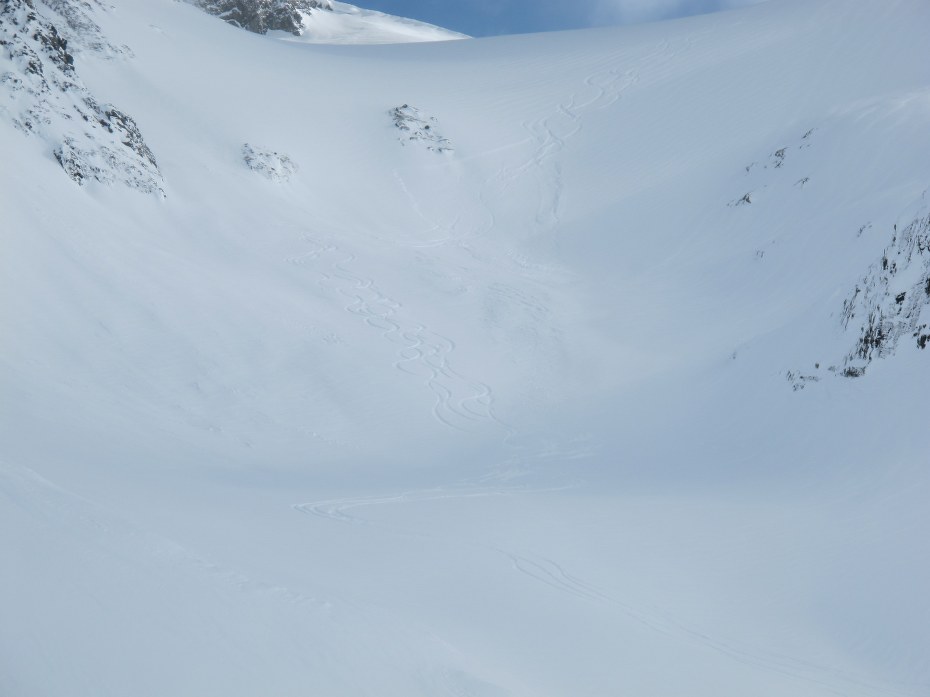 The snow was amazing, but even on the moderate slopes we descended one skier at a time to mitigate the hazards of avalanche. 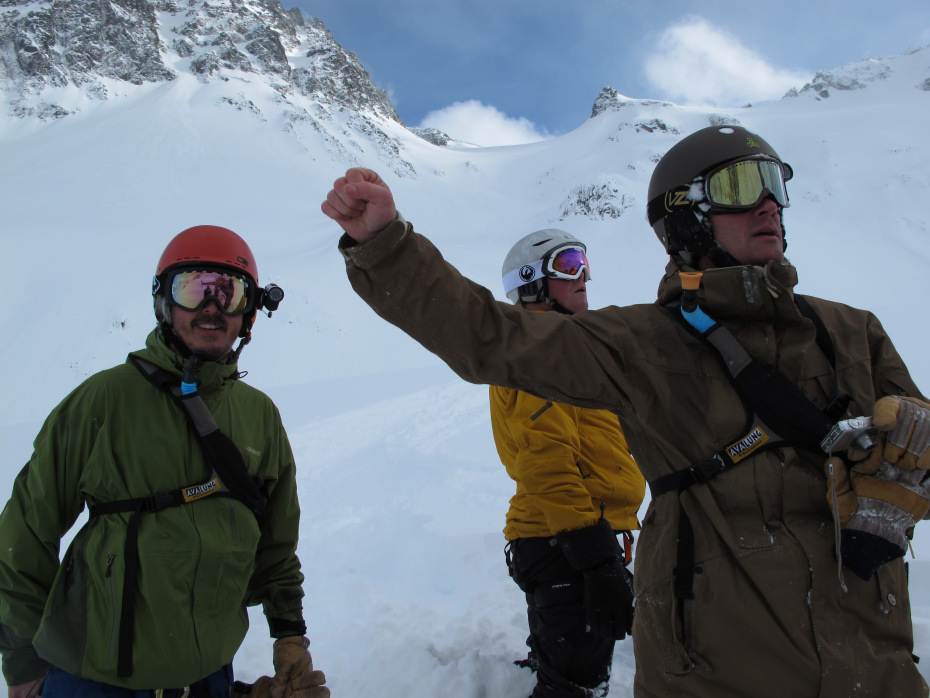 Communication between riders is critical. Each of us had a radio, through which Tom directed the team. Since he would go down first and it was hard to see upcoming features or unsafe snow, Tom would direct us through the radio as we skied. This was extremely helpful. I didn't have a radio, but again, SEABA supplied me with the right gear to stay safe. 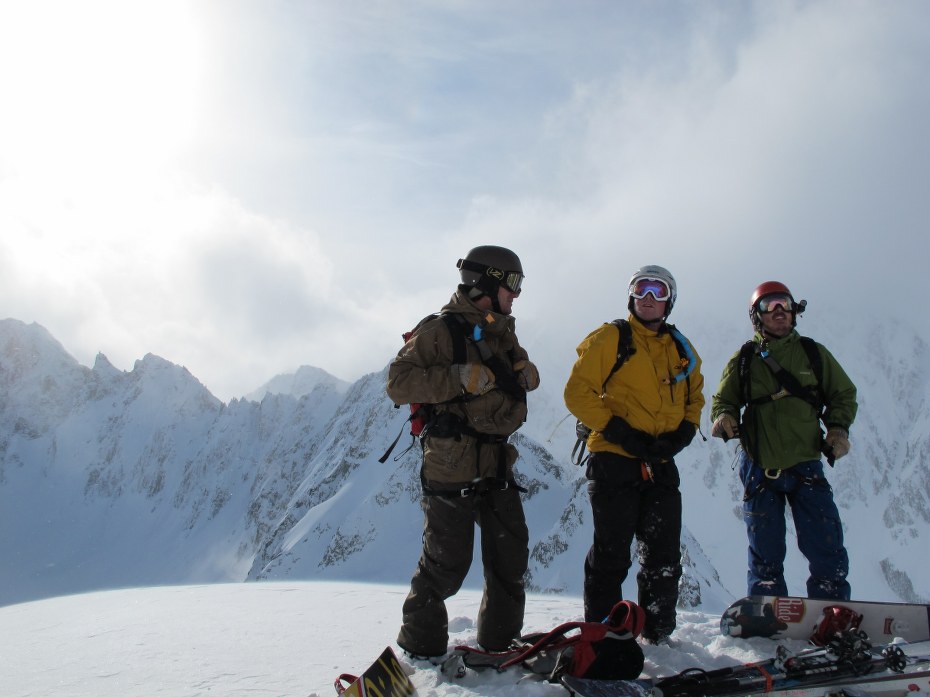 Equipped with an Avalung system

Each of us was equipped with an Avalung system, but ultimately it was the know-how of Tom and the SEABA staff that kept us well out of danger's path. 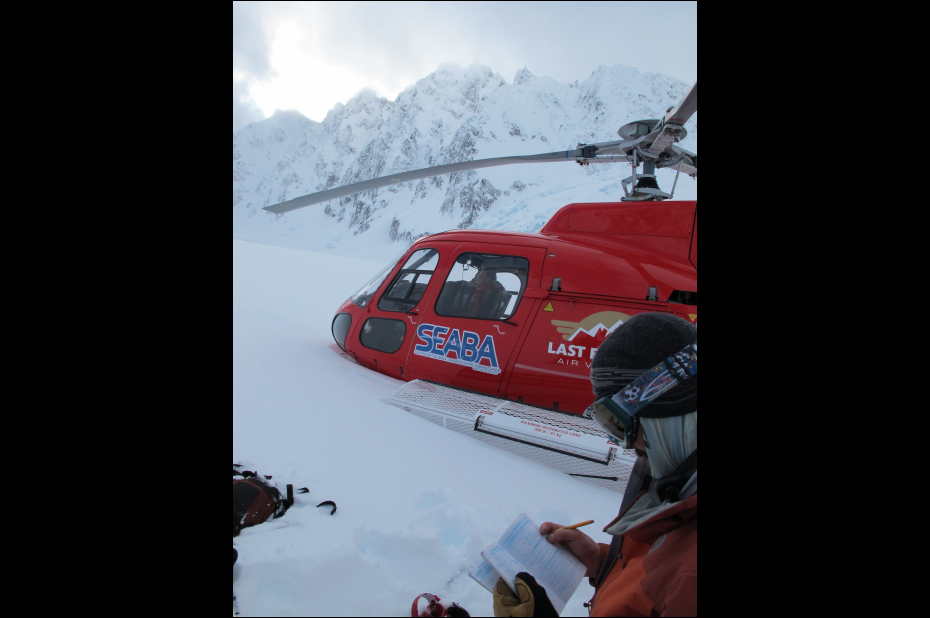 Steve was able to bring the heli down on this gentle hill on the back of the glacier. Tom seen here again, taking notes on the instability in snow conditions that we safely traveled through. 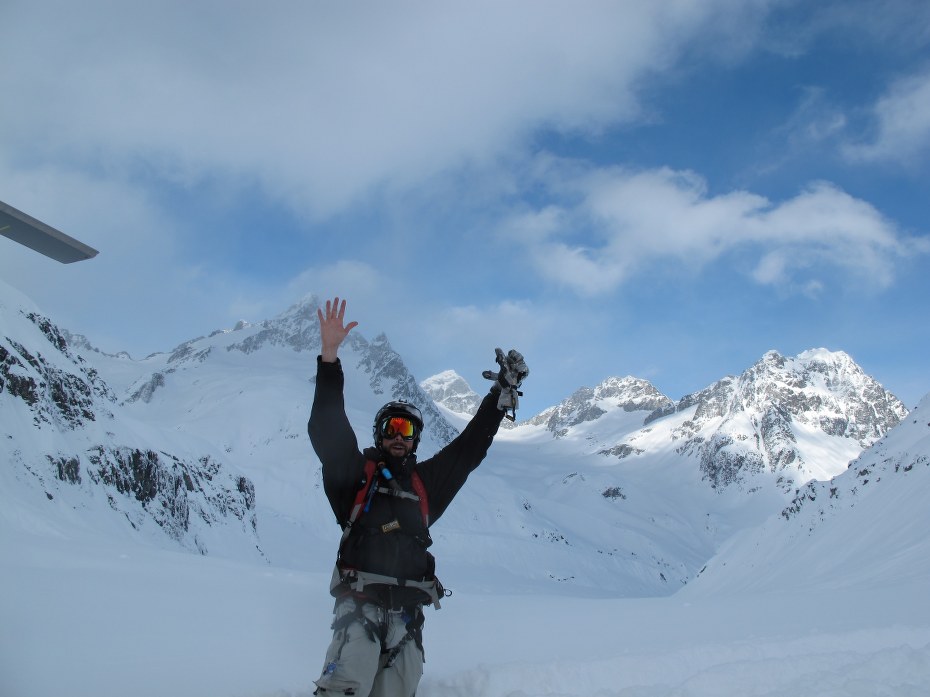 Simply put, being out there in one of Mother Nature's grand cathedrals makes you feel alive. 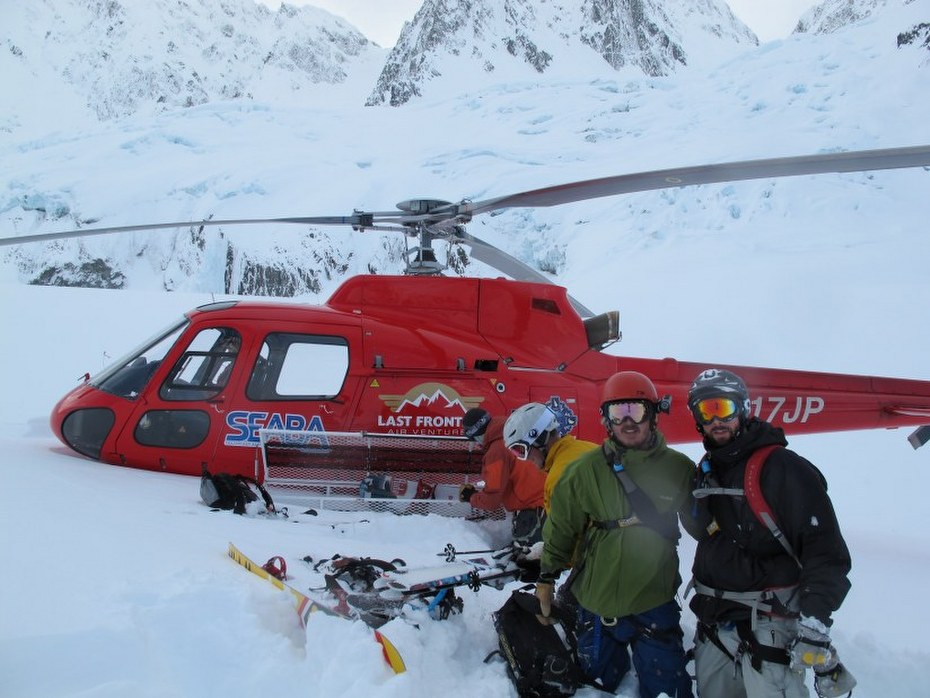 At the end of the day, we had gotten one of the best ski days of our lives. We owed the safe ending to Tom and the amazing staff at SEABA. 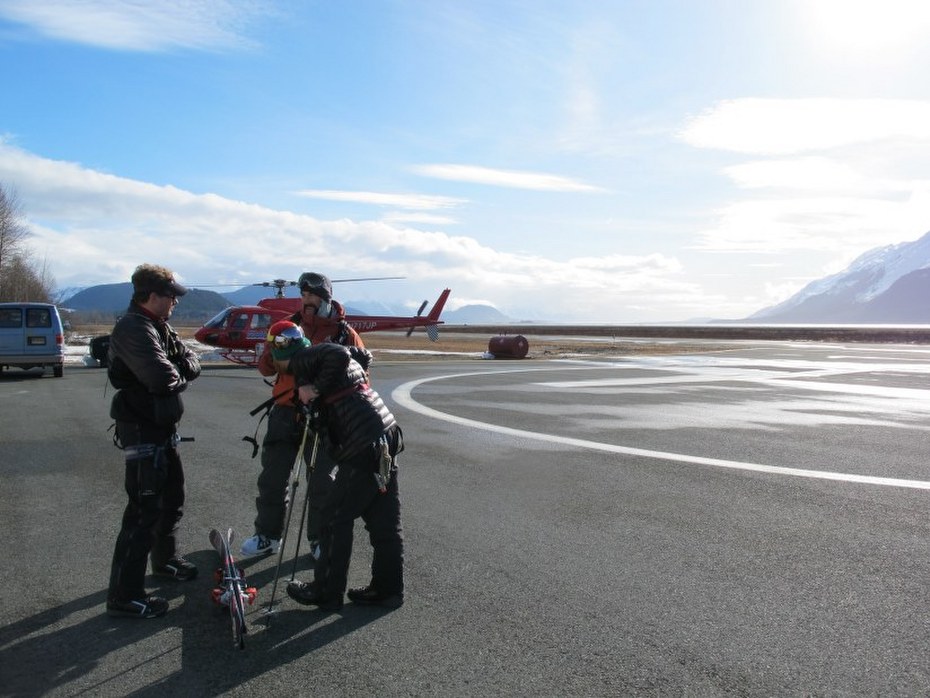 Tom seen here briefing the other guides on all of the avalanches we encountered. The SEABA staff opted to return to the airport early and wait for another day to let snow conditions improve.

Guide To Beer Drinking in Alaska