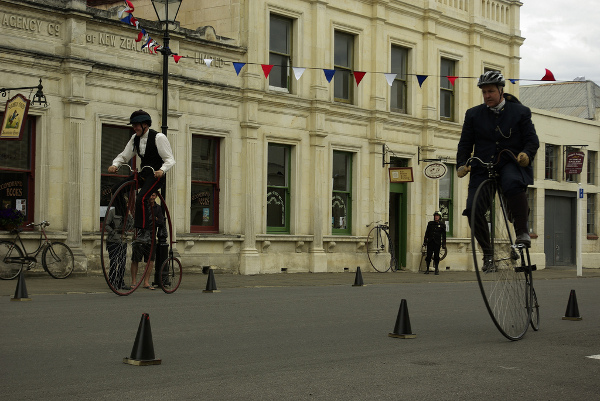 PEDALING SEVERAL feet above traffic on an old-fashioned bicycle was not what I was looking forward to as I finished up my 1000-plus kilometer bike trip around the South Island of New Zealand.

As I arrived in Oamaru, my thoughts were on sitting down, drinking a beer, and possibly tossing my rented bike into the ocean. After taking on steady headwinds and Andes-like uphills on a diet of peanut butter and Marmite sandwiches, I was ready to set aside cycling for a while.

My plan was to amble through the achingly cute historic section of Oamaru, New Zealand’s Victorian village. Much of the town has facades carved out of Oamaru stone, a type of limestone that is relatively easy to work and hardens to a marble-like consistency. It has loads of faux-Victorian architecture, and even a few city-dwellers who dress in period costume to go about their daily errands. 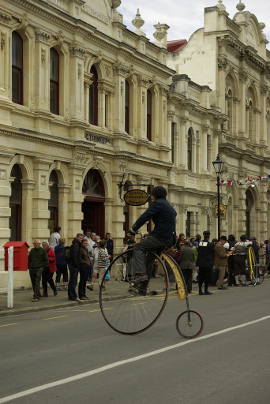 It’s also home to the Oamaru Ordinary Cycle Club, a group of throwback bicycle hobbyists who have been building, showcasing, and riding antique-style bikes since 1994. Their collection includes a copy of the pedaless Drasine, on display in the shop, and a penny-farthing, that improbable-looking steed with the giant wheel in the front and the wee one in the back.

I had the tremendous luck to happen upon the shop on a day it was open, which is how I found myself stepping onto a small platform and hurling myself up onto the uncushioned leather seat of the penny-farthing while Bruce, the able bike groomsman, stood nearby steadying me.

The steering was strange, like riding a tricycle. Every iota of movement up top translated directly to the wheel, setting me wobbling. I pedaled in long strokes, wishing I had a longer inseam, and kept Bruce in view over my right shoulder as he kept his hand on the bike.

Riding faster was easier. The bike felt much lighter than I had expected, and was surprisingly smooth, especially considering the tires were solid rubber galvanized on. And the view was fantastic, like riding a horse that rolled instead of clippity-clopped. I felt like I was riding in a tilt-shift photo, the giant girl in her tiny city. I was Alice-in-Wonderland on wheels, too tall for my own good, and on a bike of ridiculous proportions.

I tooled out of the parking lot and up a long street. When I noticed that Bruce was no longer touching the bike, I almost choked on my own saliva. It was like riding without training wheels for the first time. A crowd of strangers was cheering me on now. I made a very wide right turn and headed back down the mostly traffic-free street until I reached a lamppost, where I was instructed to dismount. All this without smacking my face on the pavement, many thanks to Bruce.

New Zealand is full of a hundred and one adventure sports of questionable wisdom, from rolling down hills in hamster balls to jumping off bridges. But for NZ$10, I’ll take the tip of the hat to Victorian times, along with the nifty certificate. And then I’ll get back on my multi-speed, normal-sized bike, with its panniers and brakes and things.

Try it for yourself:

To contact the Oamaru Ordinary (High-Wheeler) Cycle Club, write the club captain at heritage.futures@xtra.co.nz, or pop by for a visit on Harbour Street in the Historic District. As it’s run mainly by volunteers, hours can vary, though if you get in touch they’re sure to open up for you.