The truck shakes violently and my back smashes into a ski pole again. “You guys OK back there?” Mike shouts. Clutching to the spare tire in the bed of the truck I brace for the next impact and wonder how I got myself into this situation.

A few days earlier I received a text from Austin. It read, “it’s in, road closes next week, let’s get it!” Below the text was a blurry photo of a distant peak with a tiny strip of white running down the middle. It’s October and it’s hot, the warmest October on record in the state of Colorado, in fact. Skiing is the last thing on my mind, but when Austin gets excited about a ski adventure it can be infectious and all rational thought goes out the window.

I weighed my options: I could tag along and spend two days trudging my gear to a remote peak with a 50/50 chance of actually skiing or stay home and enjoy the last few weeks of the beautiful fall weather. The first choice guaranteed pain, suffering, and the chance of skiing an amazing couloir in October. The second choice was unlikely to involve pain, suffering, or discomfort of any kind, but no skiing.

Austin’s enthusiasm to walk a very long way for a small patch of snow was fueled by his most recent project, Ski RMNP. A project to climb and ski the 50 tallest peaks in Rocky Mountain National Park. His passion for this project is undeniable, but his enthusiasm is sometimes geared toward ticking a peak off the list rather than just for the sake of skiing in good conditions. I keep this in mind while weighing my options.

Two days later I find myself driving from the comforts of my home in Telluride eight hours toward the Indian Summer enveloping the Front Range of Colorado. It’s October 21st, the weather report is calling for 85 degrees, and there’s no sign of snow anywhere. I meet up with the rest of the crew at 9 AM on Friday morning.

The line we’re eying is a thin couloir dropping off the South East face of Ogalalla Peak. The strip of snow is one of seven permanent snowfields in the Middle Saint Vrain drainage. Our hope is that there is a bit of new snow to smooth out the surface and allow a proper ski descent.

Located on the southern border of the park, Ogalalla requires very long approaches from the North through Wild Basin or from the South through the Indian Peak Wilderness. Its remoteness leaves the pages of the summit registry very sparse and I would guess it’s only seen a handful of ski descents over the years.

We’d heard of a few groups of Colorado hardmen touring in from the North and linking up a number of peaks including Ogalalla. We are not hardmen, so we opt for a slightly easier approach from the South.

With the help of Mike’s Toyota Tacoma that looks more like a monster truck than something you would see at the local ski hill, we make our way up the Middle St. Vrain trail. Four miles of rock crawling and creek crossings and we arrive at the trailhead. 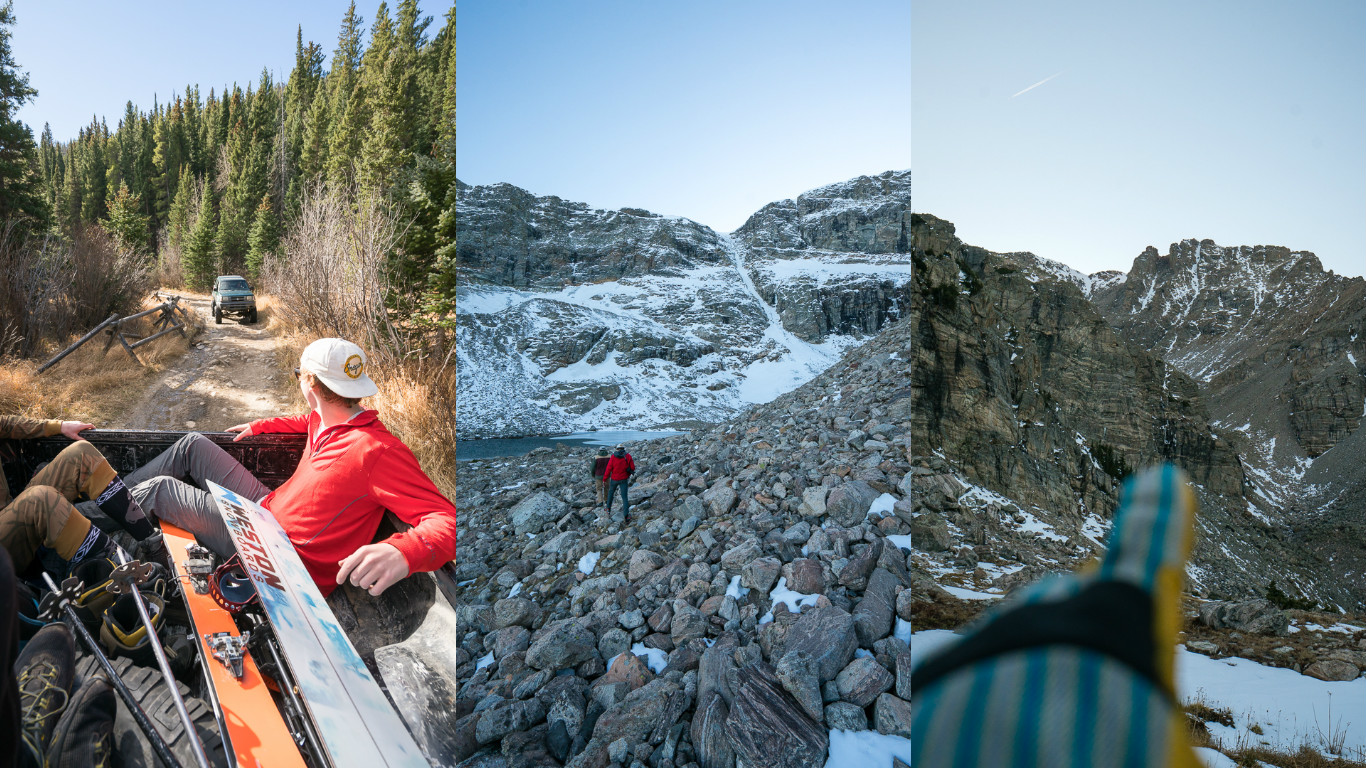 Left to Right: Getting to the trailhead // The first of 7 permanent snowfields in the Middle St. Vrain drainage // The South East Couloir on Ogalalla

From here we strap skis, boots, and bivy gear to our backs and work our way up to our camp at 11,000ft. After a quick dinner we scramble up the basin to get a better look at the couloir. We top out on a bench and look up to see the Couloir bathed in late evening alpenglow; a ribbon of pure white dropping from the summit has somehow survived the heatwave. It looked like it might go through clean.

The harsh ring of alarms and scurrying headlamps break the silence of an early morning. We slowly stumble our way through a maze of boulders and talus in the dark. Psychedelic hues slowly warm the cold rock below our feet as we wander toward our objective. 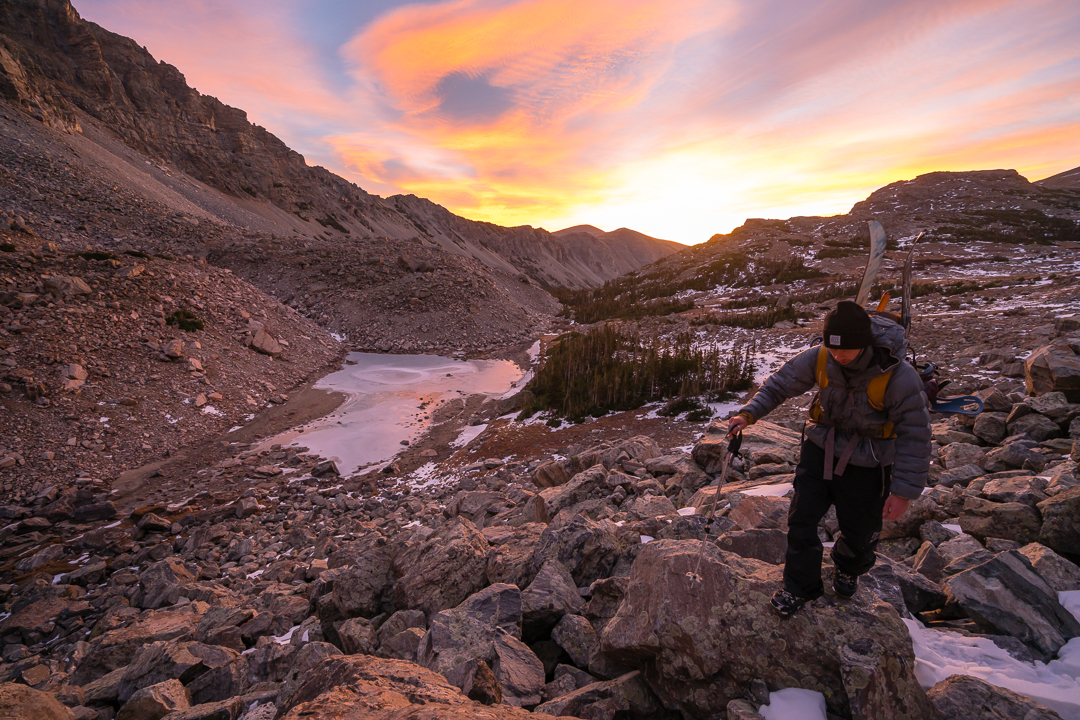 JoMon Keelan heading toward the snow as the sun rises

One foot in front of the other. The rhythm slowly comes back after a summer away from the snow. 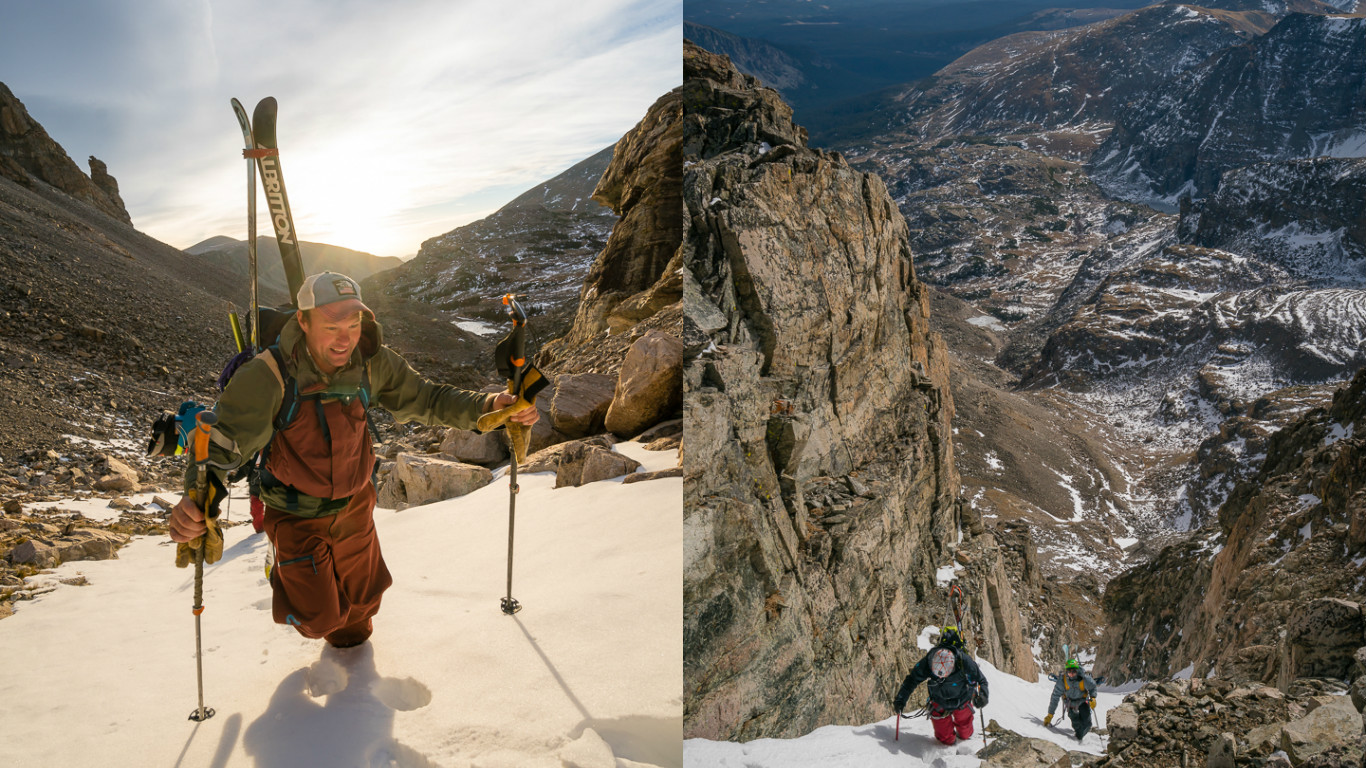 On the left, Mike Olsen stoked to finally be on snow. On the right, Austin Porzak and JoMon Keelan working their way up the South East Couloir. 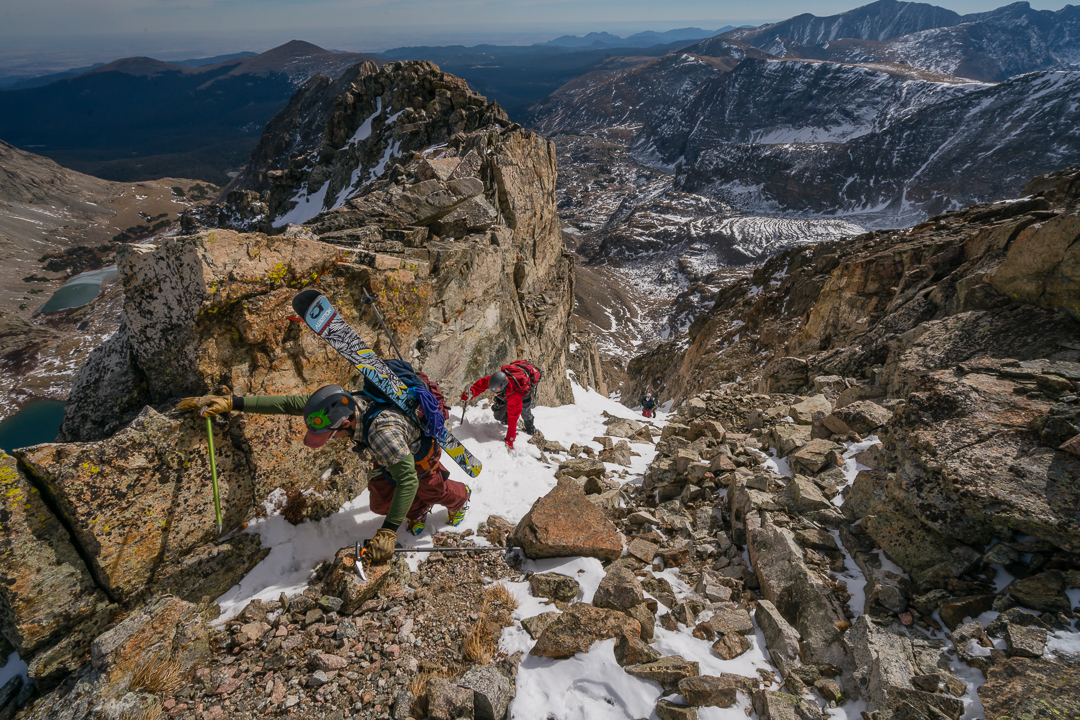 Mike Olsen and Jeff Chazrich topping out the couloir

The remote depths of Wild Basin open to our north as we crest the summit ridge. We sign the summit registry; the last signature was from July, 2016.

The rock walled couloir is lined with a thousand feet of perfect spring-like powder. We leap frog our way down the fall line, the pain in our shoulders fading with each turn. 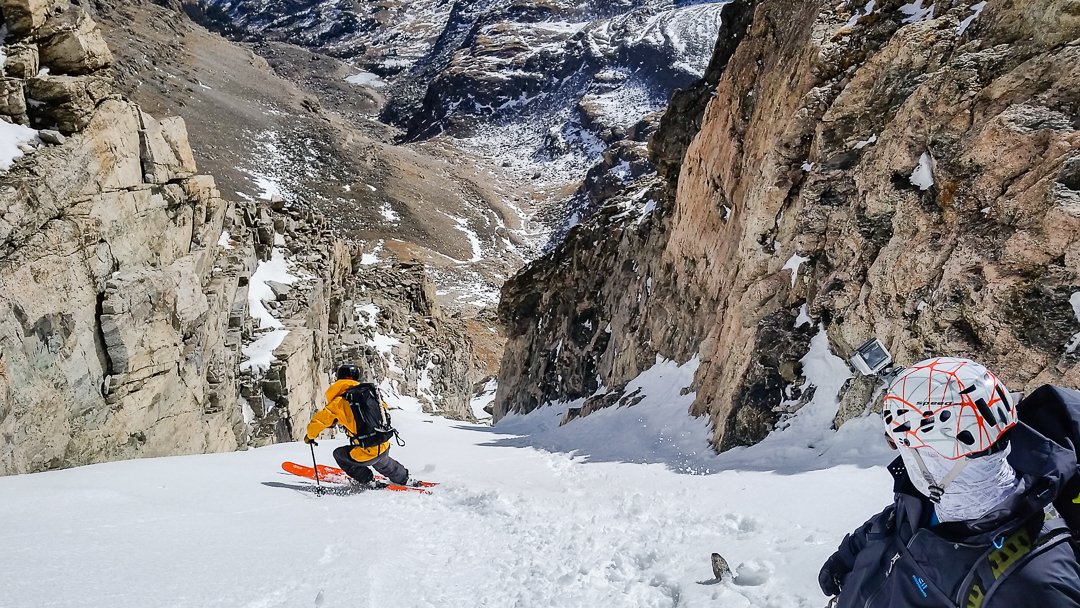 Jesse Levine dropping into the line 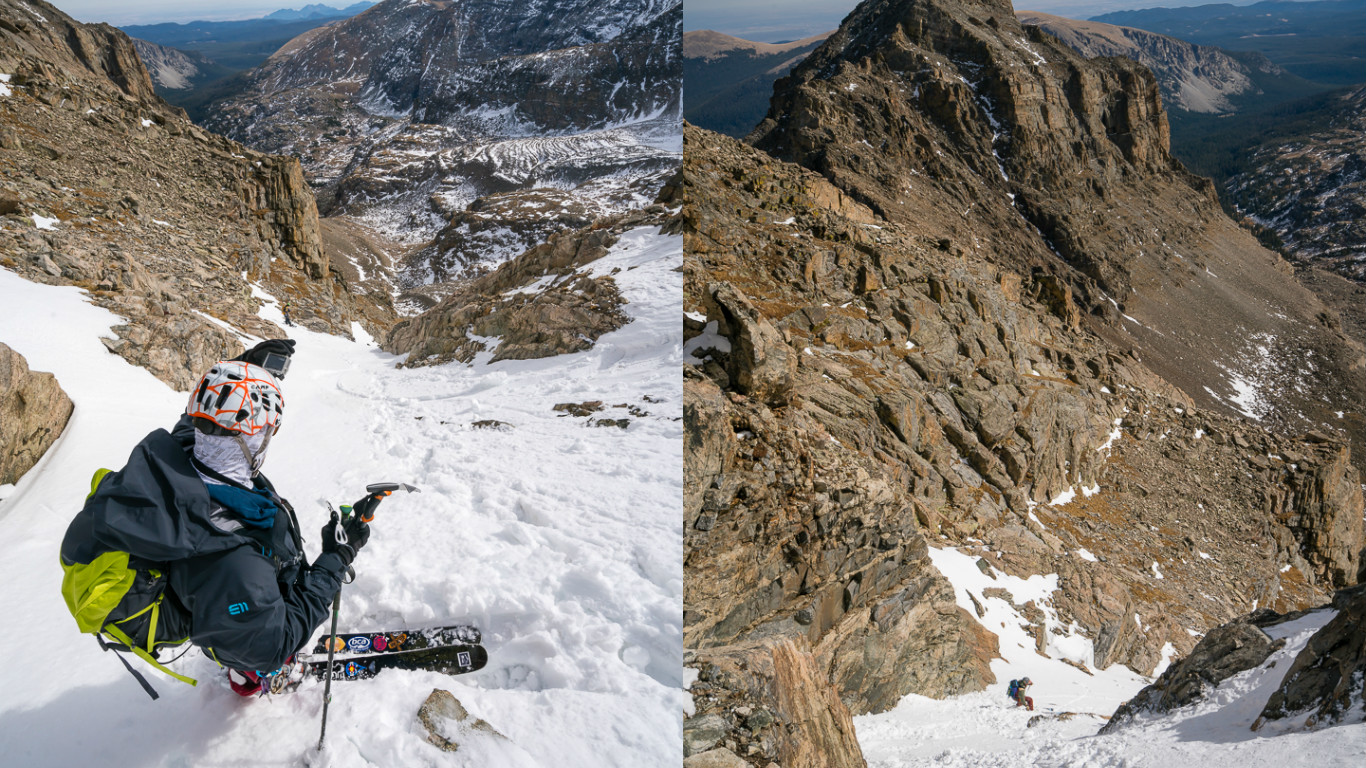 On the left, Austin Porzak checking his GoPro to document the descent for his skiRMNP project. On the right, Mike Olsen making turns with Elks Tooth looming in the distance

High on the buzz of an amazing summit and ski descent we crack jokes, dodge moose, and jump across creeks all the way back to the truck. Bouncing back down the Middle Saint Vrain 4×4 trail under a star filled sky I can’t help but smile and giggle to myself. The things we do to slide down some snow. Then I get jabbed in the back with another ski pole.