THERE’S SAND IN EVERY CRACK. Tiny deserts in my shoes, my cameras, my earlobes, and fingernails. Last week, “Sahara” was just a word from the movies. Now I can’t get it out of my eyes.

I remember a local news reporter asking us why we’d come here. It’s a good question. I’m thinking, why is there a news crew here?

I remember driving into a town I’d seen from space. An abandoned jigsaw of cinderblock huts in this forgotten nowhere cove. Staring down from Google Earth, I thought, why is this town abandoned? Later, actually standing there, I am no less confused.

Sahara is a place without answers — a shifting riddle of endless sand.

An old man crawls from the ruins. He is covered in mud. He yells when he speaks, telling us the government chased everyone away from this town years ago. They don’t want people to know about it. He blames the octopus for everything. We nod and smile; the octopus is definitely to blame.

As he tells us this history, clean point-waves reel across the point behind him. It’s 100 degrees out and we are putting on wetsuits. There are military checkpoints every 50 kilometers out here. Why so many stops? What are they checking for? There’s only one road for a thousand miles. What’s changed since the last stop?

We left in a rush , late already. Balinese pro surfers Marlon Gerber and Mikala Jones were ready to go within the hour. Filmmaker Taylor Steele and I were already at the airport. No sleep. Overpriced tickets. Upset wives. We lost half our camera gear to Moroccan customs and just kept moving. A journey like this can rip you wide open.

And then we have to sip tea from fly-infested cups with strangers in the desert. The strangers have guns. They speak a strange language. If not for our Moroccan guide, we’d probably still be down there. Sipping tea. Covered in flies.

Sahara is a no man’s land. A “non-self-governing country” is the official term, if that even makes sense. Morocco ran off the Mauritanians and Algerians in 1991, but the UN won’t recognize their claim. Africa says the land belongs to the native Sahrawis, but these nomadic, tribal berbers lack government to back such claims. They might not even know about ‘em.

Now an unfought war simmers in the dusty nowhere of nothing. A nonsense of hospitable hostility in a place that makes no sense. Ask a question of the desert; the desert will ask one back. 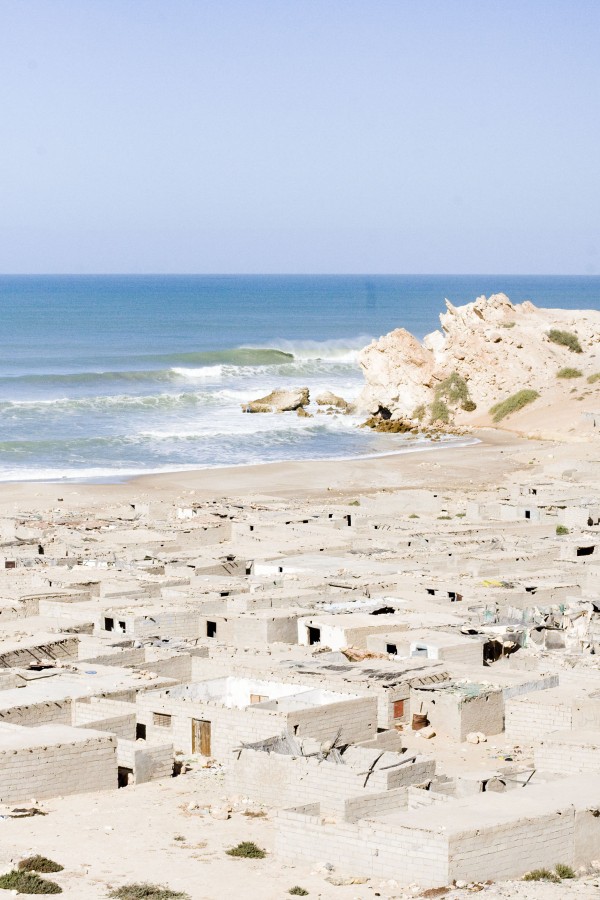 This abandoned town hosted an excellent wave. There's a reason it's abandoned, I just can't explain it.

Everything looks the same out here. Hour after hour. Dirt. Rocks. Dirt. Sometimes we stop hike across the flat plains to the stare at the Atlantic. There are landmines. And there are pointbreaks.

We locate the break we’ve come here for and make our approach on foot. Massive dunes and high cliffs separate us from the Atlantic. Sometimes we pause for Taylor Steele to film some iconic “walking across the dunes” shots.

During one of these stops, two men appear from behind the dunes and begin screaming. “Get away from here!” they cry. “No pictures!”

Really? Localism? Here? They are surfers, wearing pink boardies and familiar logos. And they are angry.

There is pushing and shoving. Screaming and threats. The only surfers for a hundred thousand miles are fighting over an empty wave. It’s too strange to comprehend. We turn around and hike away. Confused. Stunned. Full of questions. Like, did that just happen?

Now it’s New Year’s eve in the Sahara desert. Not exactly what we’d been dreaming of, but we’re dealing with it. We spent our day surfing the pointbreak near that abandoned village. Talking with the crazy mud-man. The water was cold and the sets inconsistent, but Marlon and Mikala rode enough bombs to make the effort worthwhile.

Now it’s celebration time and we’re three million miles from a power-outlet. How did this happen? There is sand in my nose. We drive to the remote town of Dahkla, with its small, Beyond Thunderdome kitesurfing scene. In a dark, back alley, we locate a restaurant that serves beer. We order two each. And then they are gone. The Sahara is out of beer.

We drink tea and eat camel kabobs. We fall asleep without counting down the new year. Sand in my hair. Sand in my dreams. Sand in the final seconds of 2009. In the morning, a fierce scirocco wind is sending sand out to sea. Great for kitesurfers. Bad for us. Wind ripples the sand like a carpet of snakes. Agitated sands.

The Saharan news crew finds us staring at their tattered seas. “Why did you come to the Sahara?” she reads off a dusty cue card. Their cameras and microphones are riddled with sand. They want to know. Surfers in the Sahara? A good question.

From inside her pink burka, the plump reporter winks at Marlon. He stops taking off his wetsuit. Mikala answers questions like he’s between heats on the world tour. She reads questions from the card. She nods and smiles. Everybody nods and smiles.

If Sahara were a question, sand would be the answer.

We drive the long, straight road back the way we came. We stop for the checkpoints. We share long, slow cups of tea. Like a dream on rewind. This never happened. I don’t remember a thing. 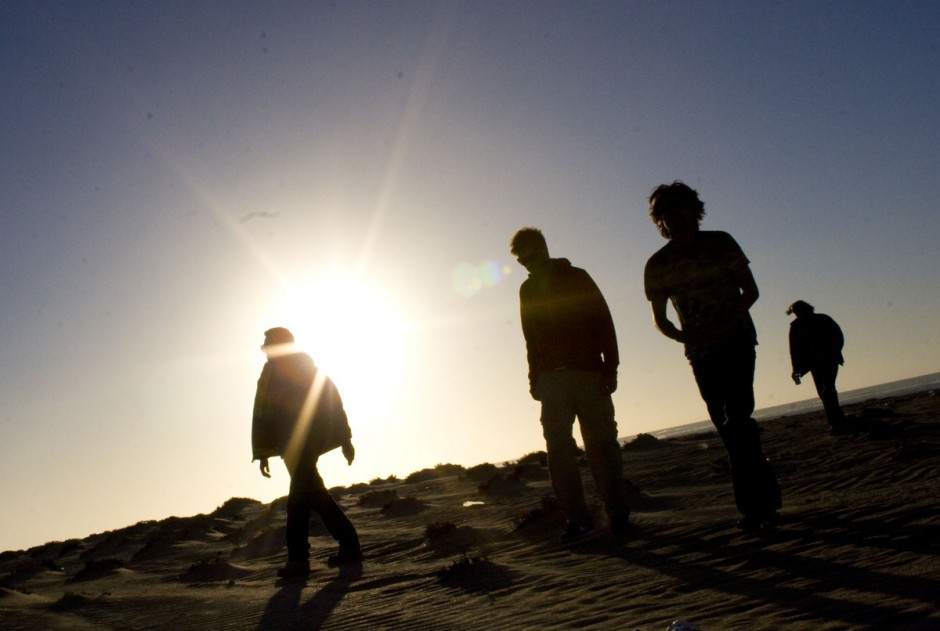 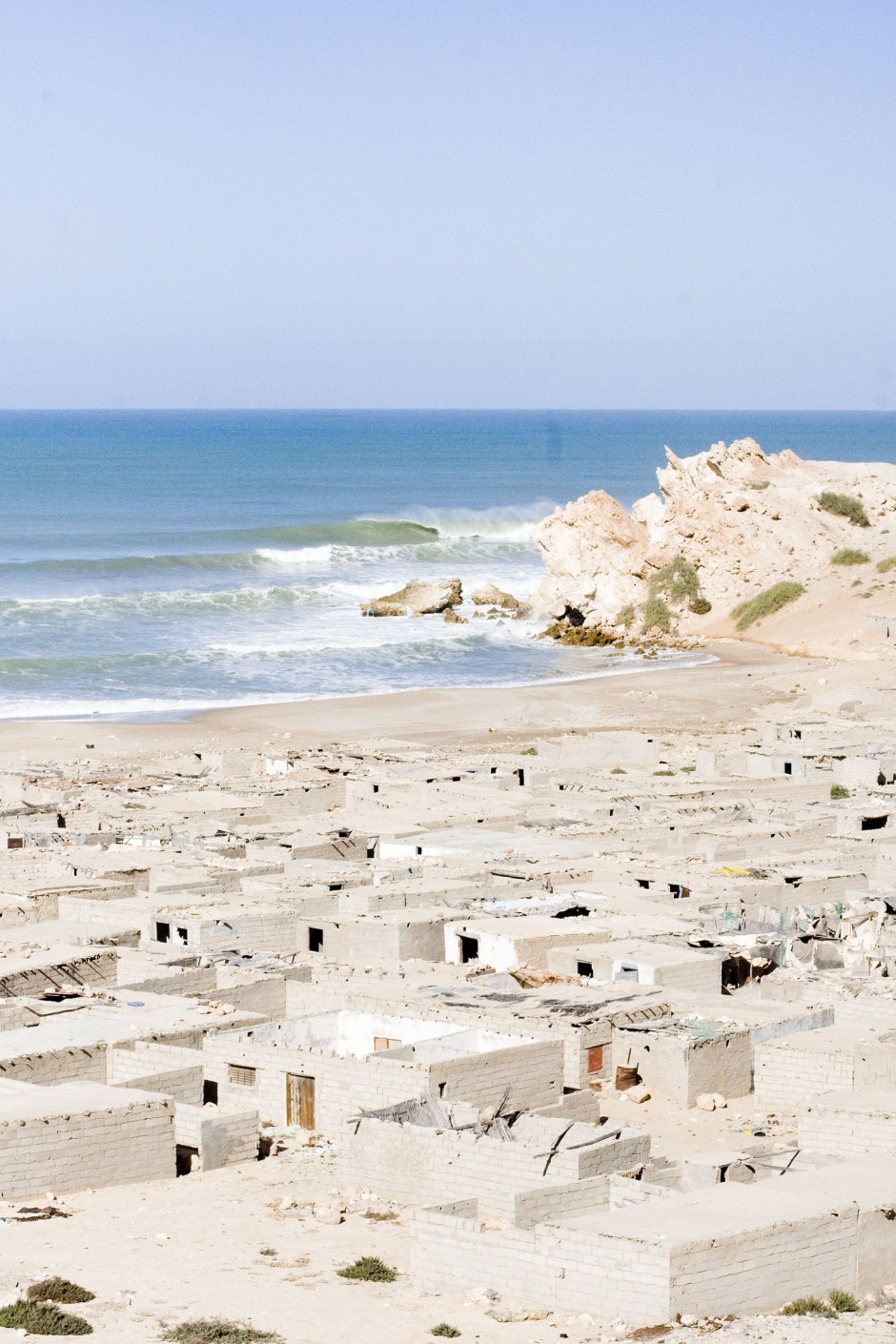 This abandoned town hosted an excellent wave. There's a reason it's abandoned, I just can't explain it. 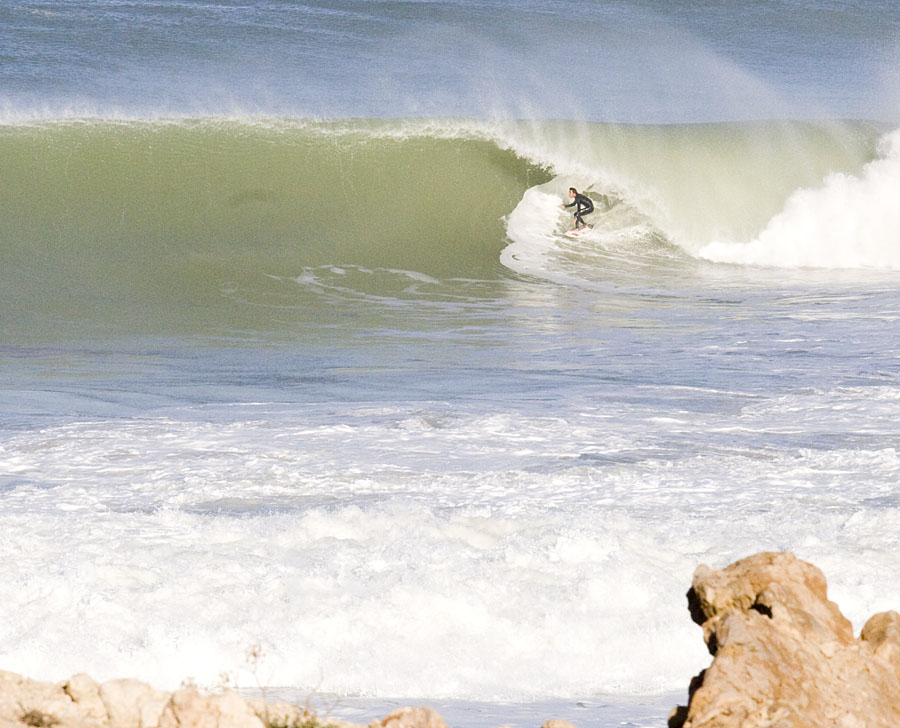 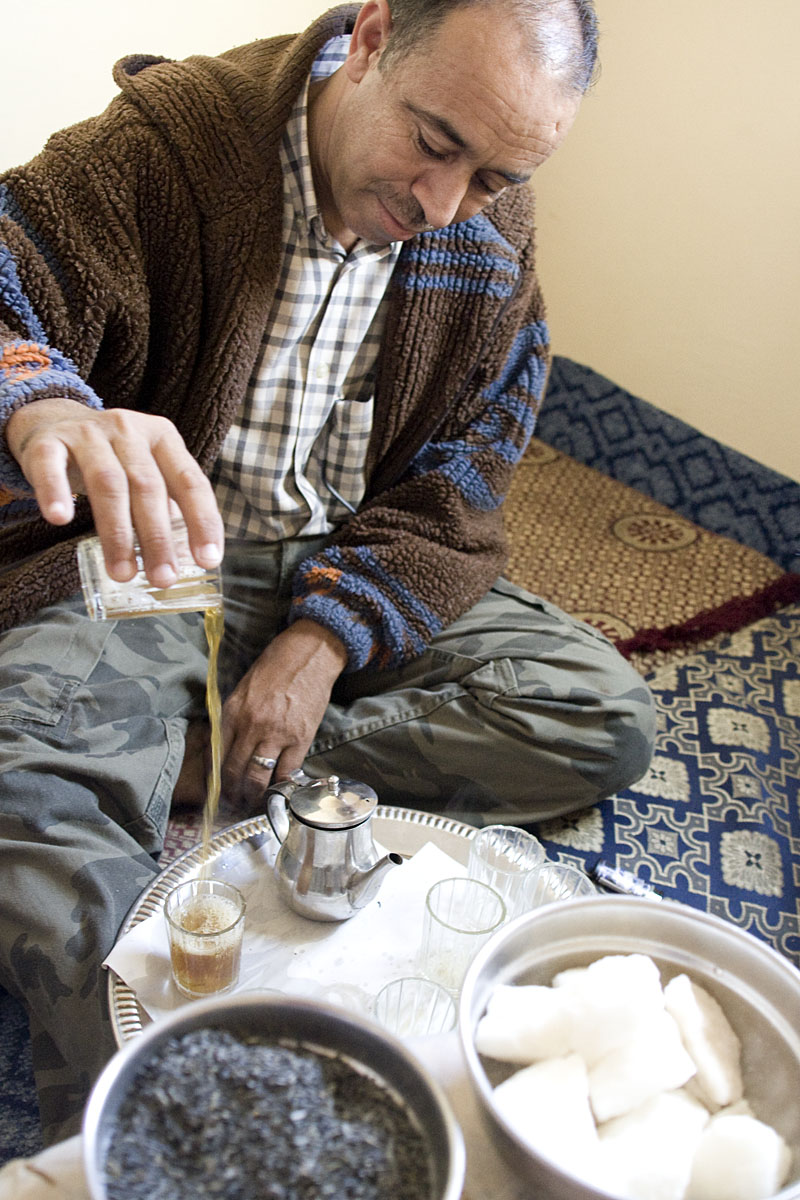 Tea is a way of life out here. A ritual, a communication, a pleasure, and an addiction. Here a local shows how it's properly prepared, melting sugar by pouring the tea in and out of the pot a half-dozen times before serving. No need to rush. 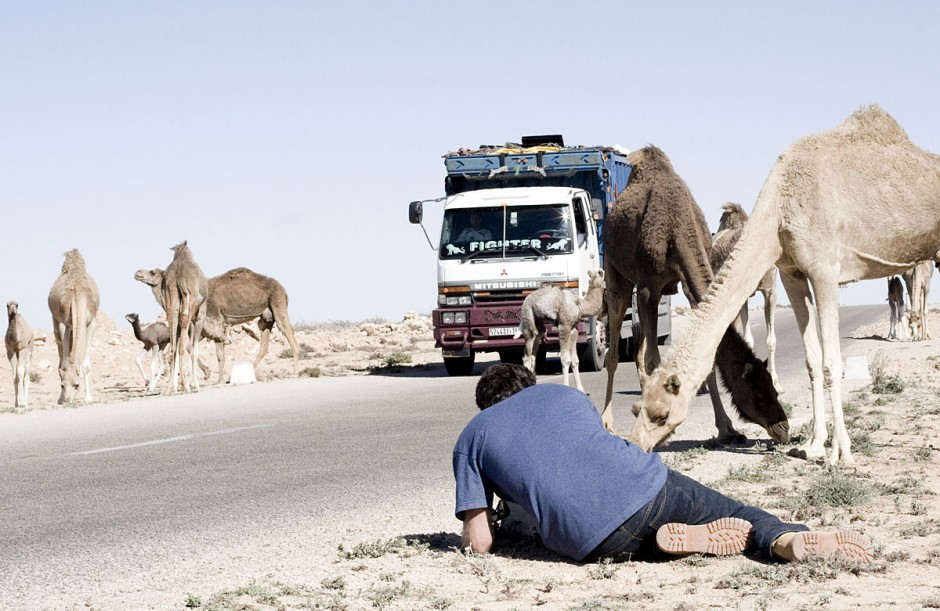 Camels are certainly never in a rush. Here they shut down, um, 'traffic' -- so filmmaker Taylor Steele set up a close shot for his travel film. 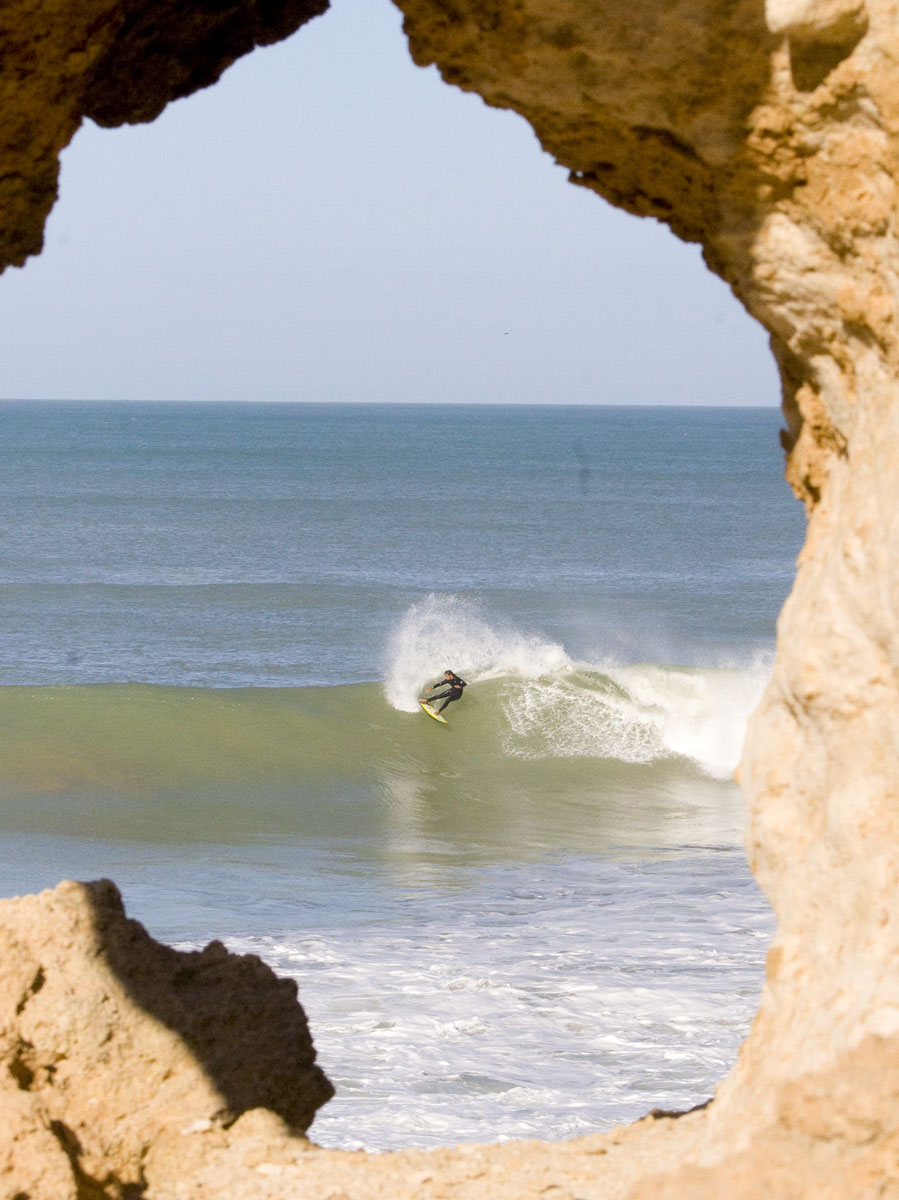 Mikala Jones, one of the world's most well-traveled pro surfers, seen through wind-carved rock formations. 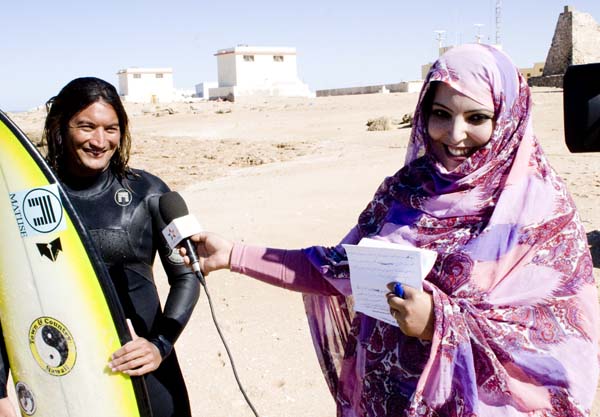 A local television station tracked us down for an interview. A strange meeting indeed. 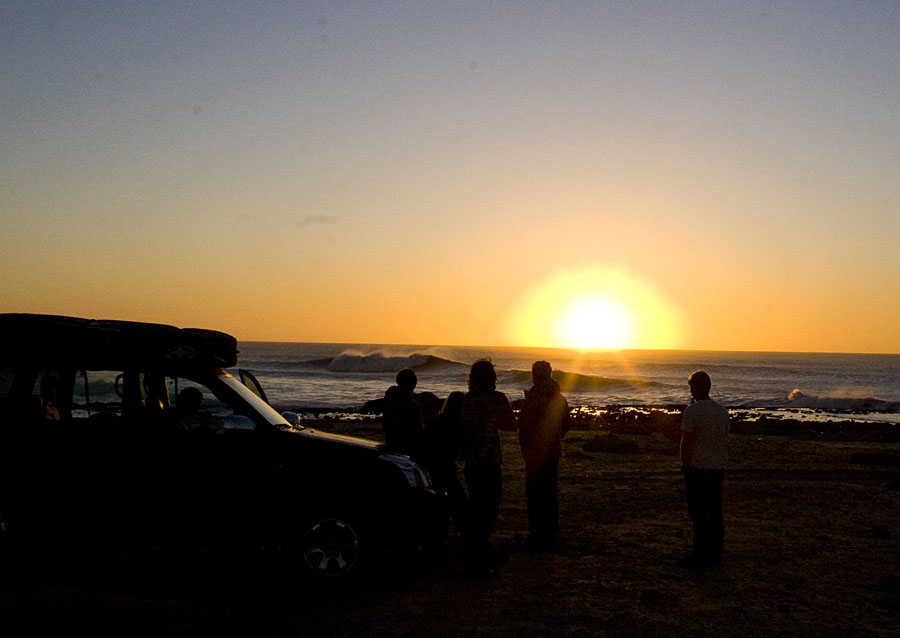 Landmines or not, following the coast through the desert is always an adventure.

Tagged
Surfing Morocco
What did you think of this story?
Meh
Good
Awesome

How To Explore Morocco's Mystical Atlas Mountains on Foot