This might be where you’ll find some of the driest, fluffiest powder in the states, but Greatest Snow on Earth or not, some days are just made for the park.

There’s a reason Park City can’t seem to stay off all kinds of “top terrain parks” lists from all over the world. They’ve got some of the most delightfully twisted minds in the industry setting up their features — the creativity here is constantly off the charts. Just look at Neff Land, for example. They could have slacked on this smaller, progression-focused park, but what you get instead is a ticket to Candyland with wacky neon-colored features, including an insane double candy-cane jib, a snow cone bonk, ice cream and cupcakes, and a bunch of other features I’d be tempted to eat.

Then head over to 3 Kings, which is engineered for long, perfect park laps, day or night. There are rails and boxes of all shapes and sizes scattered all over, along with some pretty hefty jumps, wall rides, and a brand new wrecking ball feature, affectionately being referred to as “Miley.”

King’s Crown is set to open later this season, with booters as huge as 80 feet from lip to knuckle, along with the legendary 22-foot Eagle Superpipe. While I’ll probably scoot WAY off to the side and sit those out, I’ll have my eyes peeled for some of the biggest names in freeskiing and snowboarding honing their tricks here — from Tom Wallisch and Alex Schlopy to Sage Kotsenburg and Torah Bright. This has been the chosen site for Olympic Qualifiers for the last few Olympics, including this year’s games in Sochi.

Canyons is gaining notoriety for their Transitions Terrain Park — over a mile of stomach-dropping booters, creatively set-up rails and jibs, and a bunch of sick urban features. I’m also a HUGE fan of the natural half pipes hidden throughout the resort, but from the end of Transitions to the base of Sun Peak you can tuck into the trees and try something completely different at Elwoods.

Elwoods hides tons of natural park features all packed into a slim little gully. It’s like flying through the trees, only this time you’re seriously flying and you’re bonking a gong with your skis / snowboard on the way down. All the features in Elwoods are hand-built and include a bunch of hips, tree jibs, a wooden wall ride, big ol’ gaps between trees, and of course, the aforementioned gong. 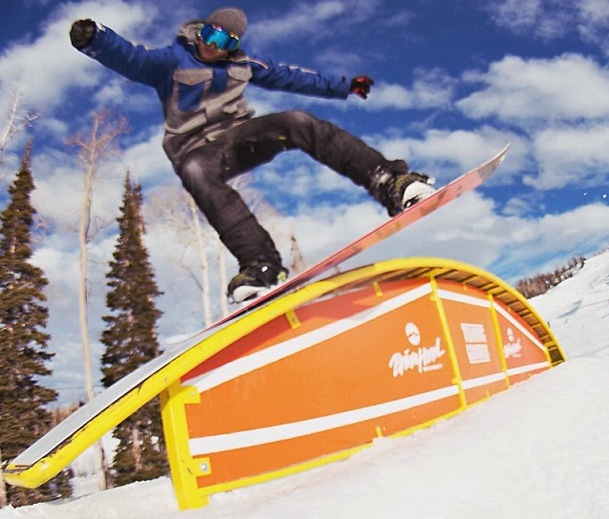 Brian Head just funneled tons of cash and muscle into upgrading their terrain parks for the year, producing the newly christened Stephen Wade Auto Centers Training Grounds parks. There are four areas that span from the beginner-friendly Foundation park off the Pioneer lift to the more technical Bypass park, which has some big-kid jumps and a wide array of insanely creative features. I’m pretty sure I saw a minivan waiting to be jibbed somewhere at Brian Head once, so it’s a sure thing that you won’t be bored here, regardless of ability level.

The arsenal at Brian Head’s going to include about 20 new features for the year, including a brand new wall ride and a stair set that’s already up for grabs in the Bypass park. They’ve also got Utah’s only bag jump, so feel free to huck some backflips without having to worry about cracking your spine in half. Here’s hoping they bring back the satellite dish!

The rail game at Snowbasin is strong — they’ve got over 65 to choose from, and they’re constantly working to build more and swap out the ones they’ve got.

In addition to their three main terrain parks, they’ve got four extra, equally rad little “pocket parks” distributed around the mountain, creating a top-to-bottom terrain park experience that feels a lot more interesting and varied than your standard park lap. This means you’ve got features like the skate-style pocket park, some down rails, and a fun-looking tire to bonk while cruising down the mountain on your way to the Littlecat Park.

The Snowbasin park crew comes up with some super creative features, and they reset their parks frequently so it’s always fresh and fun. Some of the wackier features there range from a picnic table setup, some S-rails, C-boxes, and rainbows, to a new wall ride and lots of artfully arranged lift tower jibs.

Brighton is known for how creative and well-planned their park features are. As one of the very first Utah resorts to set up a park, they’ve got the longest-running program in the state. Over the years, many a seasoned pro has served on their park crew, along with numerous professional skiers and riders weighing in on the design of their features.

Krista’s Park isn’t any different in that regard — it was designed with the help of Grete Eliassen, two-time X-Games gold medal winner and member of the US Olympic Ski Team — but it’s the first park that’s reserved just for girls. A huge win for lady boarders like me, who every once in a while might want to escape the tall-tees-and-testosterone zone commonly found at more crowded terrain parks during super-busy days. Or who just want to practice in super-secret, away from the menfolk, in a more progression-focused space.

Brighton doesn’t hold back when it comes to their parks, so I’m looking forward to having a spot where I can hang with some like-minded girls, forget about the crazy tricks the guys in front of us are throwing, but still charge hard. Krista’s Park is going to be placed right at the top of Majestic, smack-dab in the middle of Brighton’s top-to-bottom four-park run. They’ll be holding workshops and camps here, too, getting women and girls stoked on smaller park features before heading off to show up all the boys in parks like these:

This post is proudly produced in partnership with the Utah Office of Tourism.
Tagged
Winter Sports Trip Planning Utah, United States Utah: The Greatest Snow on Earth
What did you think of this story?
Meh
Good
Awesome

For the perfect day of hiking and Colombian coffee, head to Jardín How one wildlife photographer captured this award-winning shot RVs are the way to travel this summer. Here’s where to hit the road. 8 animals that take hallucinogenic drugs and enjoy it Here’s what eco-friendly wellness travel will look like in the future
✖
travelstoke
Download the mobile app
stoked by