01:22 Nov 5, 2020
Top Countries
Top CitiesView All Destinations
Trending Countries
Trending Cities
Load More
“It was like the first time you catch a wave, you know? I felt the adrenaline and I was hooked – I couldn’t wait to go out again.”

I WAS SITTING IN the second seat of a 44’ long Hawaiian outrigger sailing canoe. Chris, a member of the Maui Jim team, was sitting in the seat in front of me. I nodded in agreement to Chris, not because I had ever surfed, but because when the wind caught our sail and we started cruising over the clear blue water, I could definitely feel what he was talking about.

It was a short ride, and when it was time to tack the canoe to change direction and head back to shore, that’s when the paddling began. All I knew about paddling the canoe was that whatever side Chris paddled, I paddled the opposite. And that paddling into the wind really sucks.

It had been windy for two weeks, everyone told me. Depending on which direction the wind was blowing, that would be either really good or really bad for paddling from the island of Maui to Moloka’i, 15 miles across the already challenging Pailolo Channel. 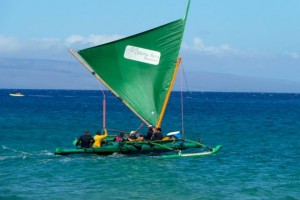 Canoe on the water. Photo by: Abbie Mood

Canoe sailing has always been an important part of Hawaiian culture. Polynesian navigators in canoes first discovered the Hawaiian islands, and canoes were an important part of everyday life, especially for traveling and fishing. The canoe sailing tradition was almost lost, but began making a comeback in the 1970s launching of the canoe, Hōkūle‘a, which was “a replica of an ancient double-hulled voyaging canoe to conduct an experimental voyage from Hawai‘i to Tahiti” using traditional navigation methods (observing the stars, sun, moon positioning and ocean currents and swells), proving that it was possible to navigate boats this way and that it wasn’t completely random that the Polynesians found the Hawaiian islands, as others have suggested.

This sailing culture continues to flourish thanks to organizations like the Hawaiian Sailing Canoe Association, which is the group of paddlers who took part in the Wa’a Kiakahi canoe race the weekend I was at Ka’anapali Beach in Maui. “We see the value of what the ancients did in everyday life,” said Leimomi Kekina, who is the cultural education guru for the association, and a member of the only all-wahine (female) team. 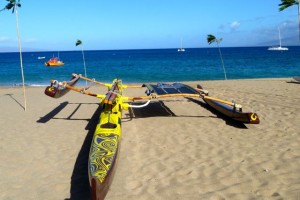 Getting ready. Photo by: Abbie Mood

There are only 10-20 canoes in the state of Hawaii like the one I’m in, modeled after the traditional, single hull Hawaiian sailing canoe. The 6-person canoe can reach speeds of 20 knots or more (approx. 25-30 mph), powered by the paddlers and steered by the sails and a skipper who uses a bigger paddle than the other five team members.

I was at Ka’anapali Beach to learn about the sailing canoe race series that takes place on weekends starting in April and ending in September all across the Hawaiian islands. The Wa’a Kiakahi leg of the race starts on Ka’anapali Beach in Maui and ends on Moloka’I, an island across the Pailol Channel. This year was the 8th annual event hosted by the Ka’anapali Beach Resort Association, with the crews arriving on Friday afternoon, hanging out on Saturday doing the canoe rides, and then taking off early Sunday morning.

The race wasn’t at all what I expected. Yes, the teams are competitive, but after talking with a few of the team members, it became obvious to me that it’s more than just racing around the islands. The mission statement of the Hawaiian Sailing Canoe Association is “to learn, revive, educate and practice those ancient Hawaiian skills and values as they relate to sailing canoes and the Hawaiian culture.”

At Ka’anapali Beach, that meant spending their whole Saturday talking to the public and members of the media about sailing canoes, and taking people out to experience the canoes for themselves. What’s unique about this event is that Ka’anapali is the only beach that allows the team members to take the public out on the boats. There are educational events and workshops on some of the other islands, but not where people get to experience the canoe on the water. And not just tourists – there are Hawaiians that come out to the event, too.

“On a scale of 1-10, this wind makes it pretty close to a 10.” Jane McKee, four-time Hawaii state champion in one-person outrigger canoeing, laughingly said. “Momentum is your friend.” If you can’t work together with your team, at best you aren’t going to get anywhere. At worst, you could crash and burn and have to be rescued by the coast guard (which is why most teams have really bright sails – just in case).

Considering the importance of working with and knowing your team members, it was surprising to me to find out that the teams don’t actually train together all that much. Between races, they all go home to their own islands and their day-to-day jobs, which range from architects to lawyers to small business owners. 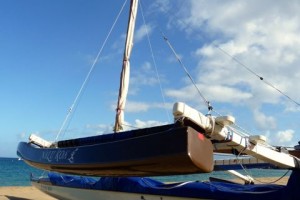 Close up. Photo by: Abbie Mood

I asked how the athletes train for the races, and got the same answers every time – paddle boarding, one man canoeing, 6-man paddling, kite surfing, wind surfing, triathlons – basically anything that involves the water. Leimomi described canoe sailing as “paddling, wind surfing and sailing in one.”

As I sat down at Ka’anapali and saw all the families hanging out, drinking beers, their kids playing by the boats in the sand, I thought of something Leimomi had said earlier in the day, “we’re very competitive when we jump in the canoe, but we’re an ohana (family). The ocean brings us together.”

Tagged
Surfing Hawaii, United States
What did you think of this story?
Meh
Good
Awesome

For the perfect day of hiking and Colombian coffee, head to Jardín
5 epic spots in Glacier National Park without any crowds
Why you should visit what was once known as ‘bad land to travel’
The most scenic Amtrak train rides through America’s national parks
The 11 hardest, most dangerous mountains to climb in the world

Hawaii is finally open to US tourists without quarantine restrictions