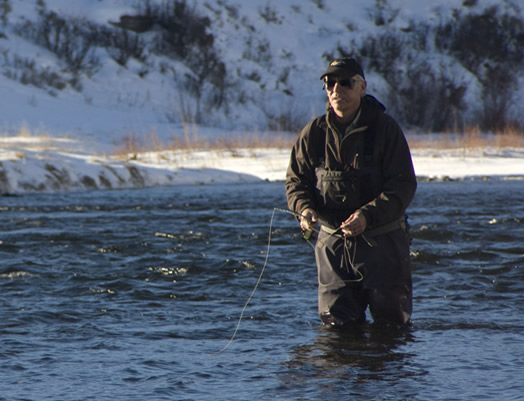 When most folks think of winter angling in Montana, they think of augers and ice shanties, waxworms and beer. Lots of beer. Few thoughts ever turn to fly fishing—and you could argue that’s for good reason.

This article has been created in partnership between Matador and our friends at the State of Montana.

“THE ONLY WAY YOU can fly fish in Montana in the winter is if you go by yourself and don’t tell anybody what you’re doing. Otherwise people will think you’re crazy to be out there fishin’ when it’s 20 below,” explained Rusty “the Redneck” Dill, a sporting goods and gun salesman in Helena, who’s spent more than a decade chasing after the legendary trout of Montana like they not only stole his flask, but took his dog, too.

Rusty is an avid angler and despite the harsh Montana winters he proudly claims to fish every month of the year. “Montana, especially southwest Montana, is the heart of some of the most pristine fly fishing streams in the world. This is ‘A River Runs through It’ country. The Blackfoot and the Bitterroot, the Yellowstone and of course the Madison River, the ‘100-mile riffle.’ This is the stuff of fishermen’s dreams and it’s all right here in Montana,” Rusty said. 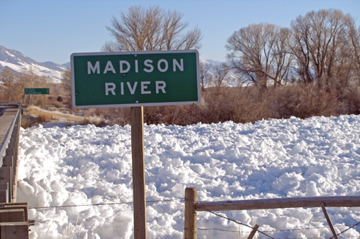 As for winter fly fishing tips, Rusty the Redneck recommends leaving your dog at home, as it can get even too cold for canines, and to always choose liquor over beer when fishing since beer freezes fairly easily. “Nothing can ruin a fishing day more than a frozen six-pack,” he explained.

Here’s a six-pack of other tips for fishing the “off-season” in Big Sky Country:

1. Don’t be afraid of the locals — unless they have guns

Since tackle shops in Montana are as prevalent as coffee shops in California, it should be easy to check with a local shop for where the water is free flowing and accessible during the snowy months. Most fisheries in Montana stay open year-round and thanks to the Montana Stream Access Law are open to public use, but it’s always a good idea to check with a local pro when fishing unfamiliar waters.

It’s also important to remember that you may have to share the water with hunters, as duck and goose season in Montana runs until early January. Everyone over the age of 15 is required to purchase a fishing license in Montana.

Unlike the warmer months when dawn and dusk are best, the trout are most active during the middle of winter days. So it’s best to fish mid-day, ideally between 10 am and 2 pm, in slower moving, deeper water. The late winter months of March and April offer the most promising time for fly fishing in Montana, especially right after one of the region’s beloved warm “Chinook winds” comes in and heats things up.

3. Bring more than you think you need

When fishing during the more treacherous winter months it is always a good idea to tell someone where you’re going and when you’ll return. It’s also a wise idea to have extra clothes, blankets and something to eat or drink besides chewing tobacco, booze and beer in your vehicle in case you get wet or stranded.

Most of the winter fly fishing action takes place under the water, so bouncing bugs off the bottom usually offers the best chance for success.

Most of the winter fly fishing action takes place under the water, so bouncing bugs off the bottom usually offers the best chance for success.

Small flies, in the 18- to 22-range work best, especially nymphs, Blue-winged Olives and blood midges. Dragging “bacon and eggs,” a San Juan worm and salmon egg pattern with a small weight in between the two, is many a fly fisherman’s favorite way to winter fish.

Just like people and beer, trout are susceptible to the cold. So it’s always best to try to keep trout in the water when catching and releasing. Cold air can freeze a fish’s gills and trout build up a protective slime layer in winter that can be removed by handling them. And since Montana proudly claims to be the first state in the nation to protect wild trout when they passed the Natural Streambed Preservation Act back in 1963, it’s best not to mess with their famous native cutthroats or monstrous rainbows.

Finally, whenever fly fishing, always try to remember the sage advice penned by the great Montana writer Norman MacLean, “You wouldn’t even have seen the fish in all that foam if you hadn’t first thought he would be there.”

For paddling, backpacking, cycling, and all kinds of great Montana travel ideas, please be sure to check our comprehensive Montana resource page.

21 Fun Drinking Games You Can Play in Any Bar
The Most, and Least, Humid States in the US
Why You See so Many Babies In Denmark Sleeping Outside and Alone in Strollers
12 Common Hand Gestures in the US That Will Insult People in Other Countries
The Truth About Artificial Vanilla Extract (and Why You Should Always Splurge for Pure)