View all travel news
Top Destinations
Top CitiesView All Destinations
Trending Regions
Trending Cities
Load More
This story was produced by our friends at The Coral Triangle. Visit their site for more information on preserving this precious ecoregion and seeking out sustainable travel experiences within its borders.

Timor Leste, the fourth-newest nation in the world, is slowly emerging as a destination — and it is mostly divers that are blazing the trail. Tourism infrastructure may still be rudimentary, but this small and beautiful land offers a treasure trove of underwater experiences for divers, snorkelers, and explorers.

Story and photos by Don Silcock. 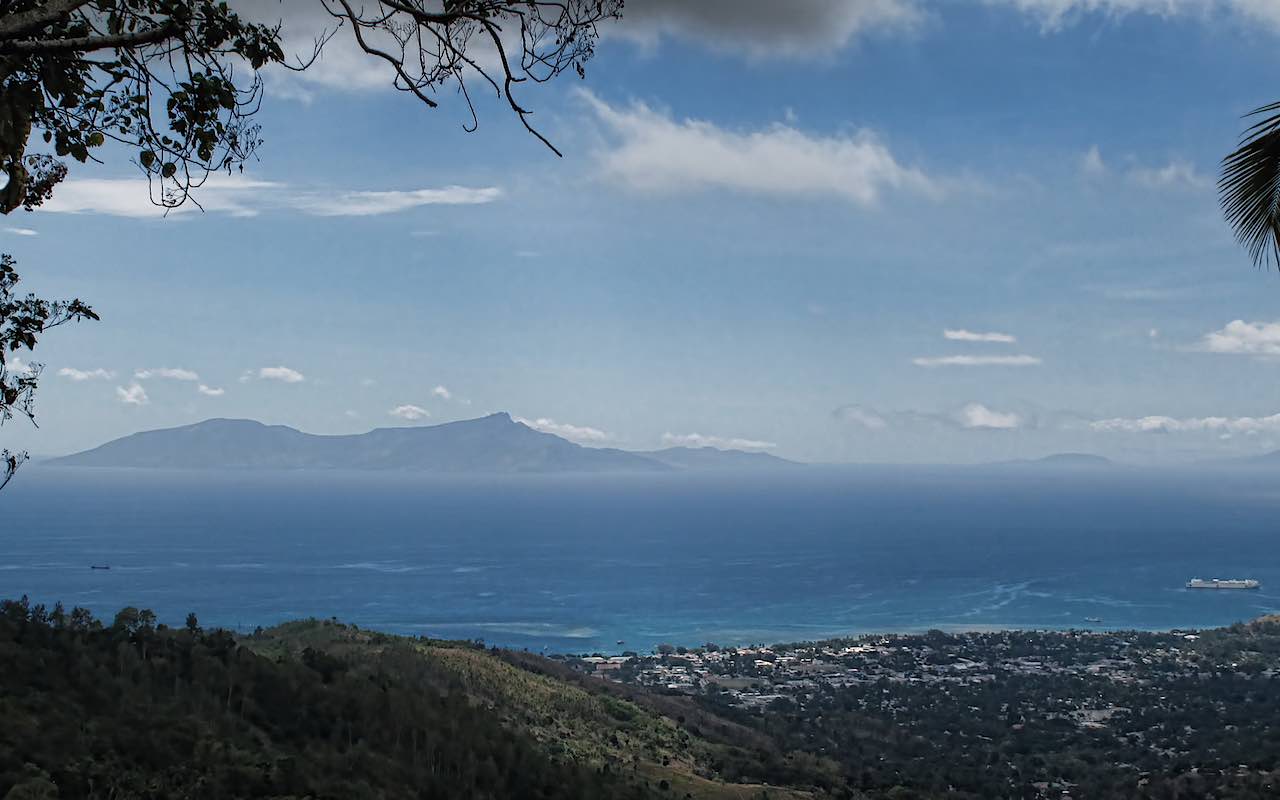 Atauro Island viewed from mainland Timor Leste. Atauro is just 25km north of Dili and has 8,000 inhabitants. It’s widely considered the most pristine underwater environment in the area and is a popular destination for divers.

First colonised by the Portuguese around 1520 the nation of Timor Leste has had a long and troubled path to independence, finally achieving autonomy from Indonesia in 2002. Prior to the bloody civil war that finally led to the establishment of Timor Leste — long know as East Timor — both the Portuguese and then the Dutch had ruled over the island of Timor, with the Portuguese for the large part retaining control of the east of the Island and the Dutch to the west. 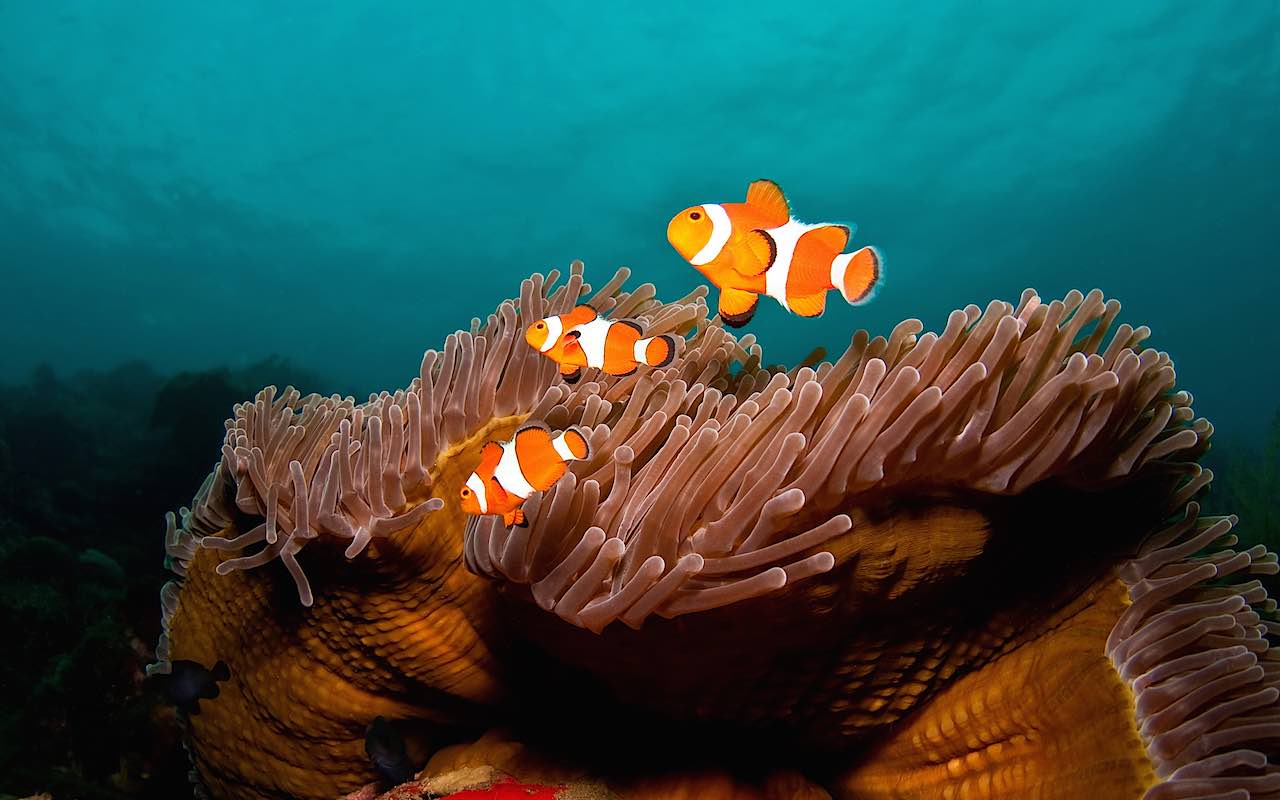 Clownfish at Bob’s Rock, a popular dive site around 25km west of Dili, the capital of Timor Leste.

In 1949, West Timor was handed to Indonesia, but the eastern part of the island remained in the hands of the Portuguese until 1975…when they left, Indonesia quickly annexed the territory and so began a quarter century of civil strife that finally ended with the historic declaration of independence 13 years ago. 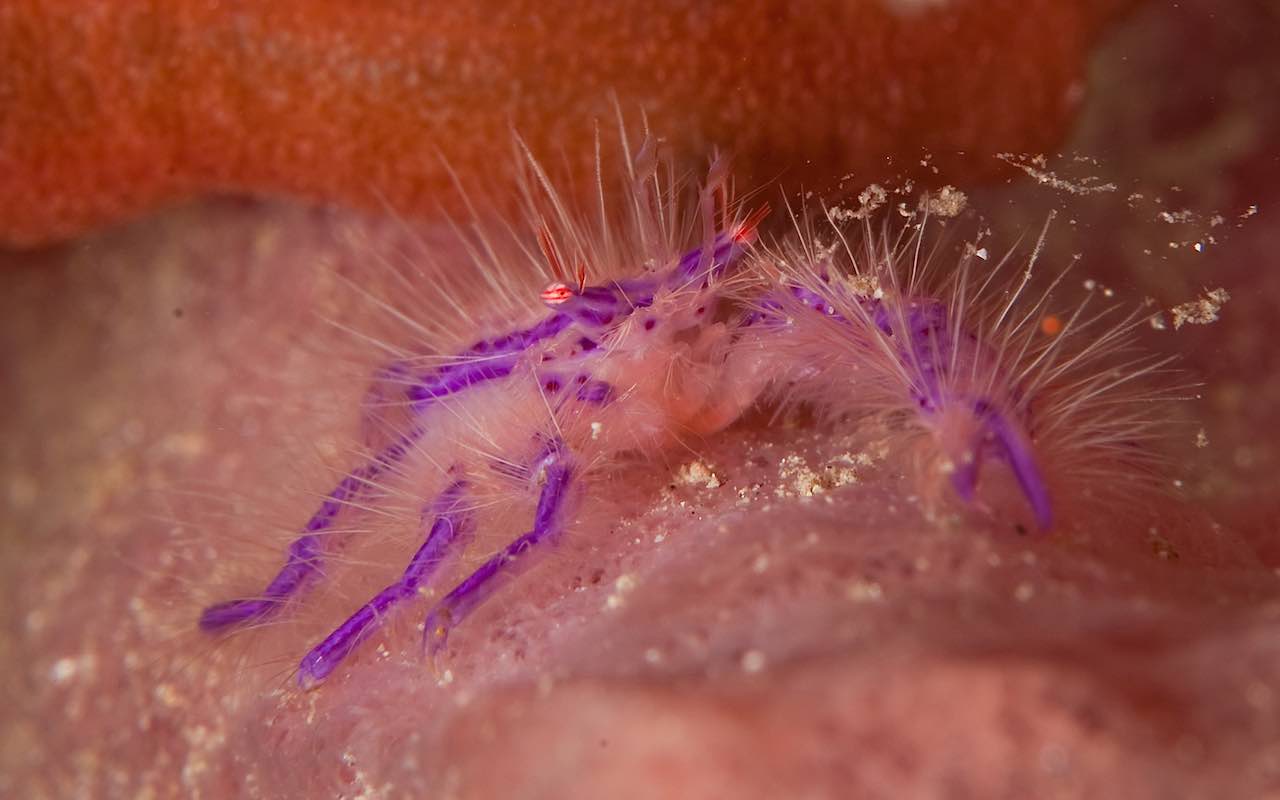 Dili Rock is on the western outskirts of Dili and offers two dive sites both of which are approached via the shore, making it an easy excursion with lots of healthy coral and critters like this one.

A quick look at the map and a basic understanding of the Indonesian Throughflow (the current that moves between Pacific and Indian Oceans, crossing Indonesia) is enough to tell you the north coast of Timor Leste has great diving potential. To the north of Timor Leste are the remote islands of Alor and Wetar — the most easterly of the Lesser Sundas island chain ath the southern boundary of the vast Indonesian archipelago. 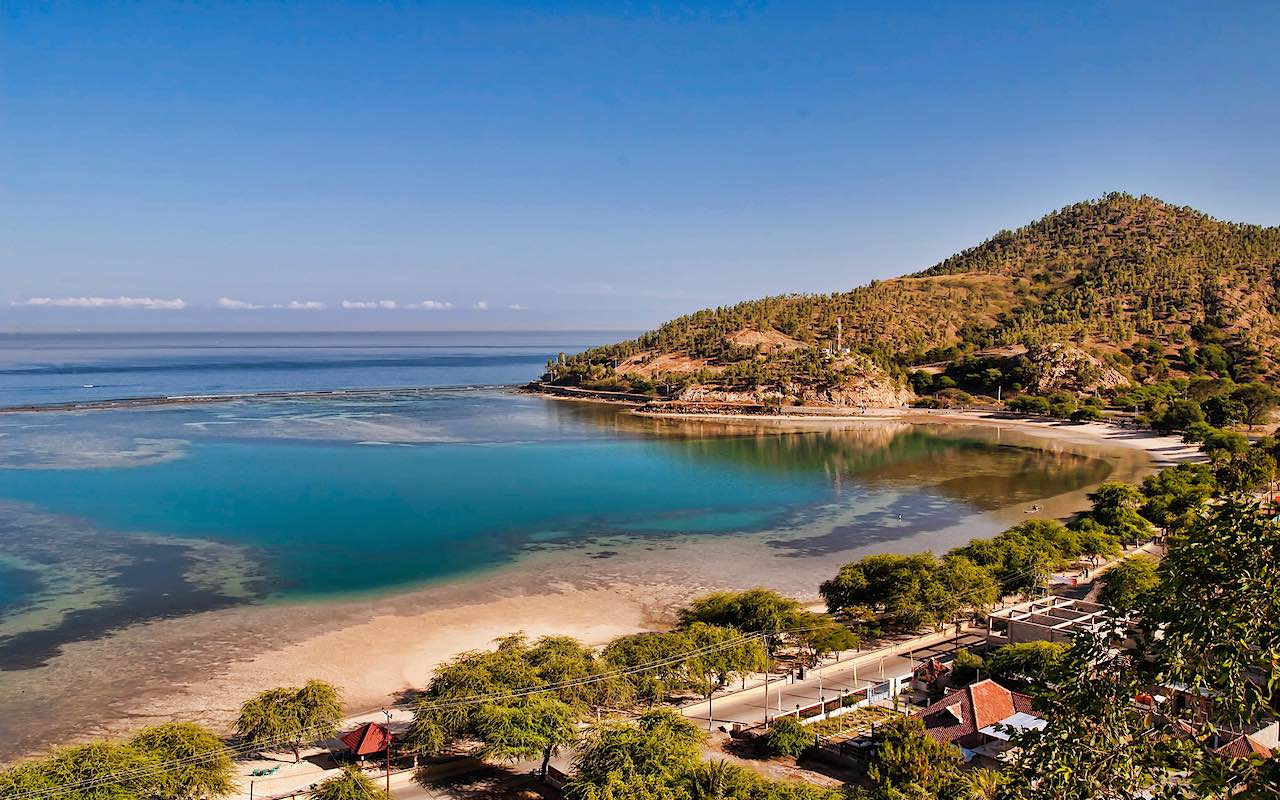 You don’t have to head far from Dili to find good diving.

Further north above Alor and Wetar are the deep basins of the Banda Sea, and as the rich Indonesian Throughflow surges its way south and approaches the Lesser Sunda shelf it creates upwellings that suck up the phosphorus & nitrogen laden nutrient rich detritus from the deep. It is this phenomenon that makes Timor Leste’s seascape so rich as one of the three main passages for the Indonesian Throughflow through the Lesser Sunda islands is the Ombai Strait between Alor, Wetar and Timor Leste. 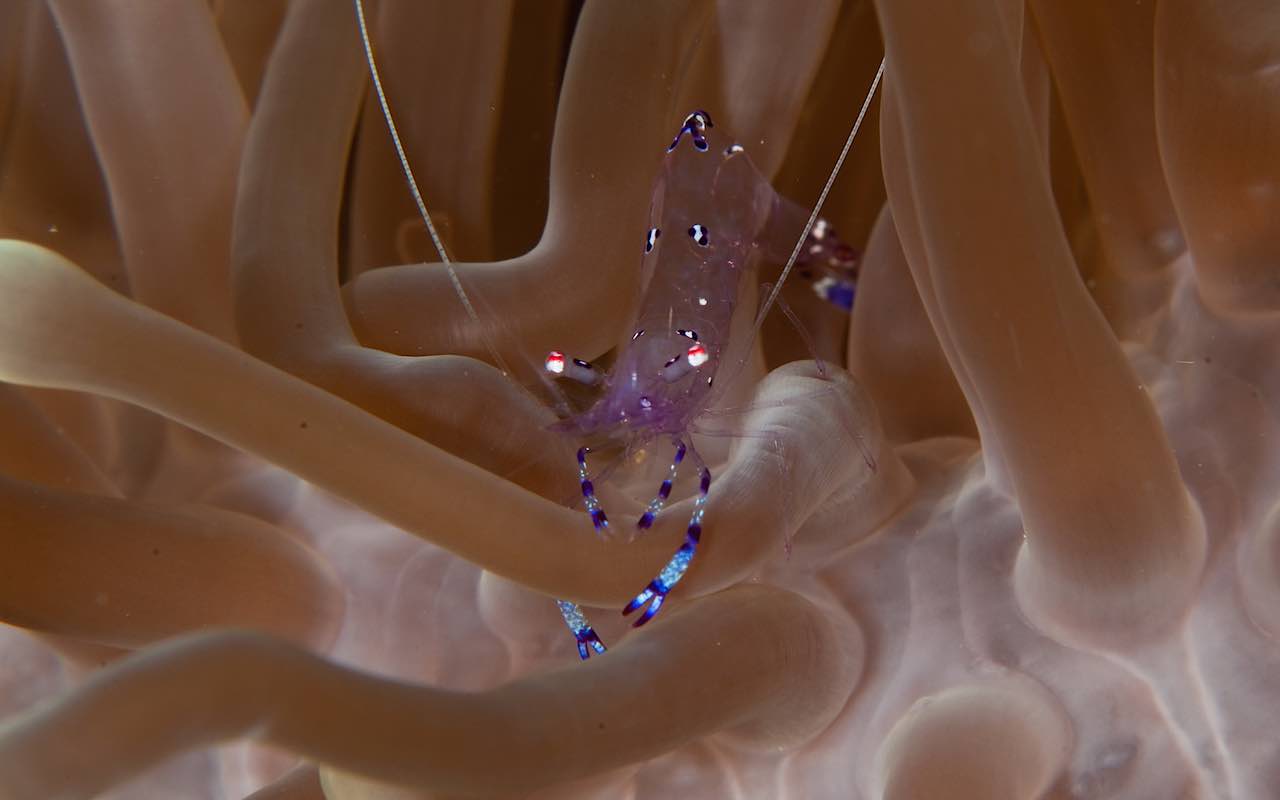 A shrimp at Dili Rock.

Many of the main dive sites in Timor Leste are in and around the capital Dili, which sits in a broad sweeping bay hemmed by dramatic mountainous terrain. The sites around Dili are mainly shore dives characterised by rich coral cover and lots of critters. 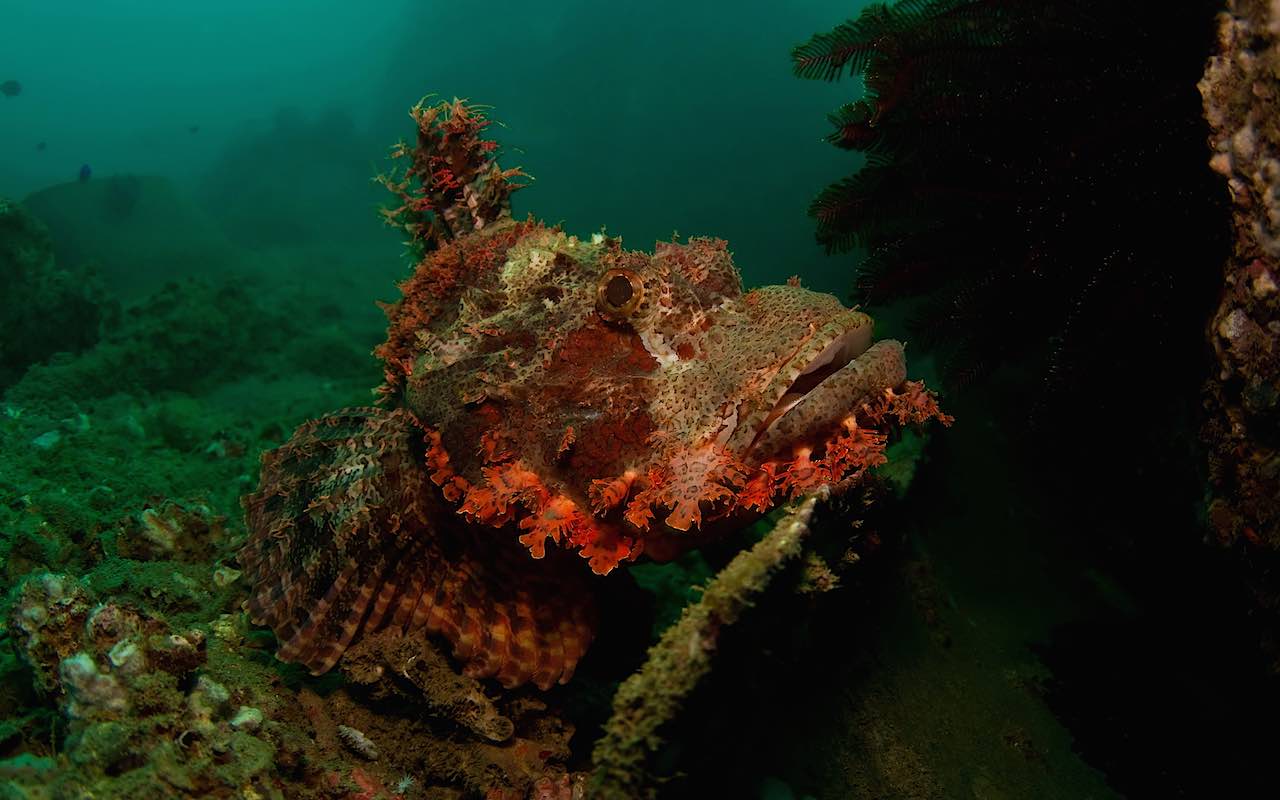 A well camouflaged stone fish hides out in the detritus beneath the Pertamina Jetty, part of on oil storage facility. It’s an interesting place to dive provided there are no ships scheduled to dock and you’re careful not to inadvertently touch one of the many stone and scorpion fish!

Located near the center of town, the Pertamina Jetty is another easy shore dive entry though it involves a long swim to the end of the jetty, often with limited visibility due to wave and current action and shipping. It’s best to inform the Pertamina staff if you’re diving independently — if ships are scheduled or docked diving isn’t possible. Visibility is best around September and October. Watch where you put your hands though as there a lot of scorpion and stone fish in amongst the pilings and general rubbish in that area. 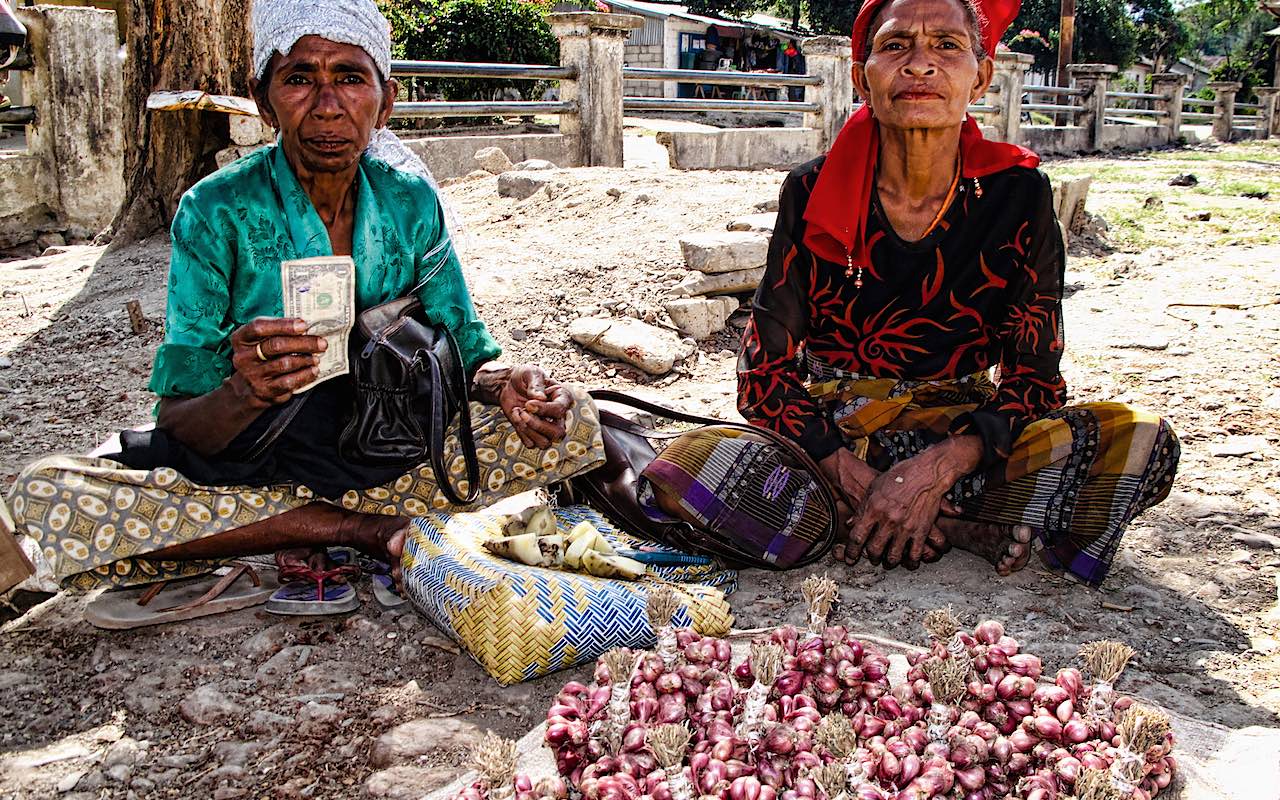 A roadside market in the mountains – the red stains on the lips are from chewing the mildly narcotic betel and areca, a popular pastime in the region.

The coast road in both directions from Dili is very scenic and although quite a lot of time is consumed driving to the sites, it’s not at all an unpleasant experience. Heading west, there are a series of excellent dive sites offering varied flora and fauna. 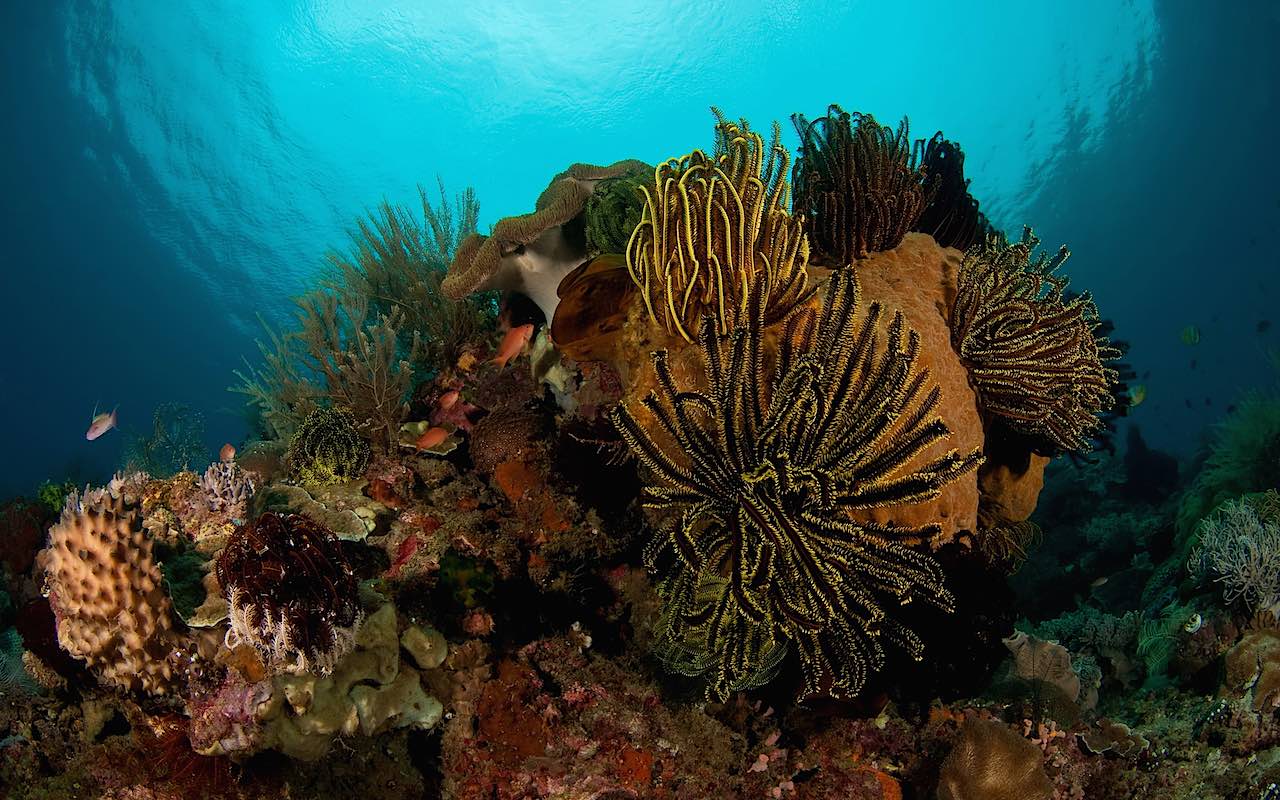 K41, as the name suggests, is 41km from Dili – you’ll find lots of coral bommies like this one, but also pelagic species like barracuda sometimes and even dugongs if you’re lucky. 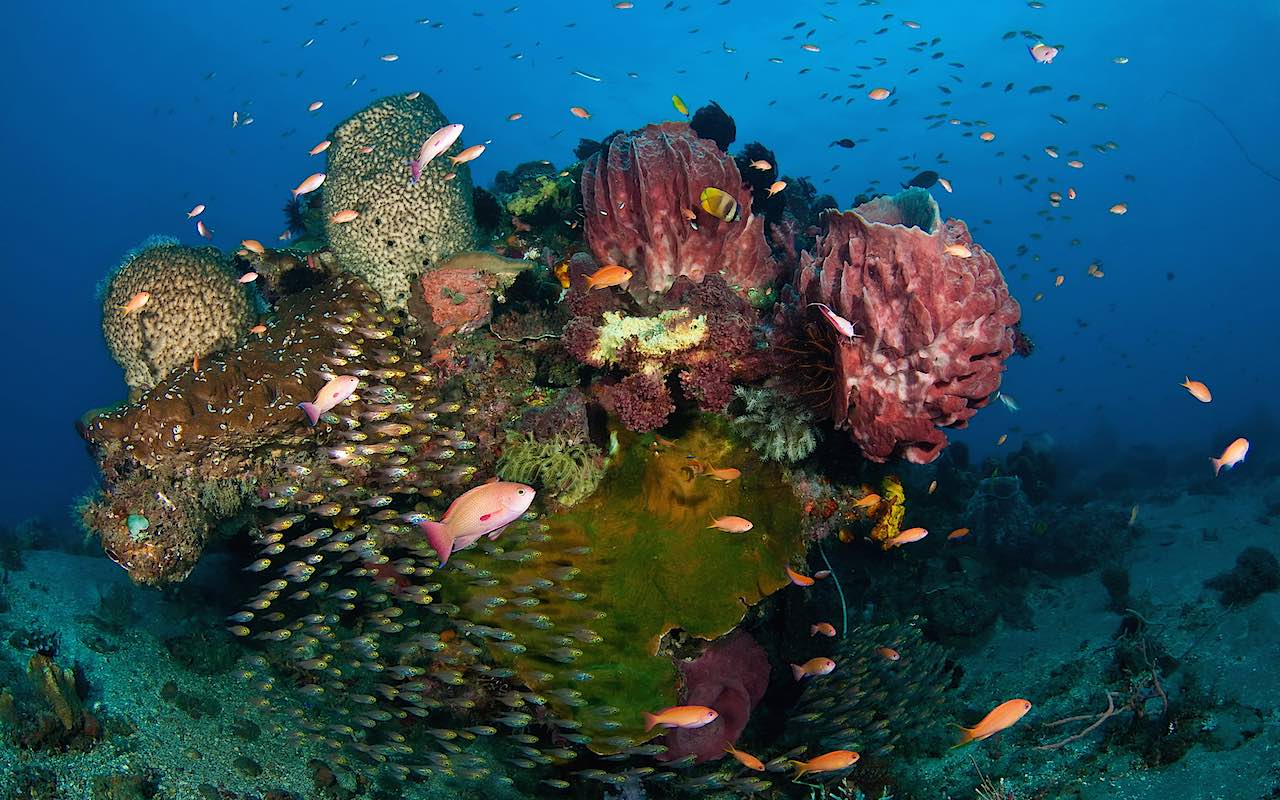 A coral bommy thick with reef fish at Maubara, a small picturesque town around 65km west of Dili.

The pretty town of Maubara is around an hour and a half out from Dili. Timor Leste is famous for its coral bommies and the two dive sites at Maubara the Church and the Fort, serve them up in spades. There’s not much to see in the shallows, but the really impressive bommies appear at around 15m – swept by strong currents, they brim with life. One particular spot about 200m north-west of the main entry point at around 19m is jawdropping in terms of the profusion and diversity of marine life on display. 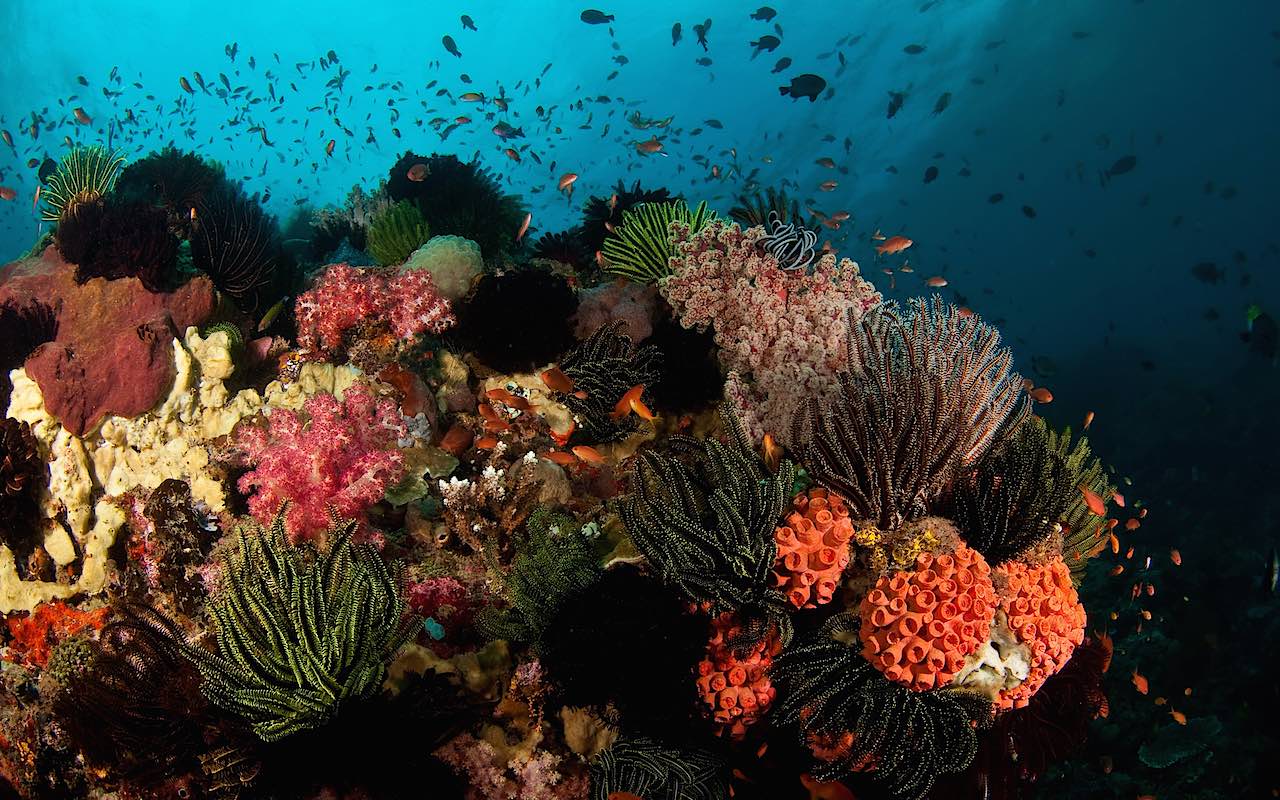 Lone Tree is so named for the one arboreal specimen that grows there – in contrast to the vivid garden that can be found beneath the ocean’s surface. Thick with both hard and soft corals as well as sponges and schools of anthias.

The rather stark and barren conditions above water are a reverse mirror-image of what is below, as Lone Tree has some beautiful and really lush bommies to explore. Richly coated with hard and soft corals, sponges and schools of anthias that dart out in to the clear blue water those bommies are delight to dive! Entry to the site is an easy walk over the sandy bottom before heading out to the deeper water and the slopes and short walls that make up the sites. There are lots of critters to see and photograph on the sandy bottom making Lone Tree a memorable dive and well worth the drive from Dili. 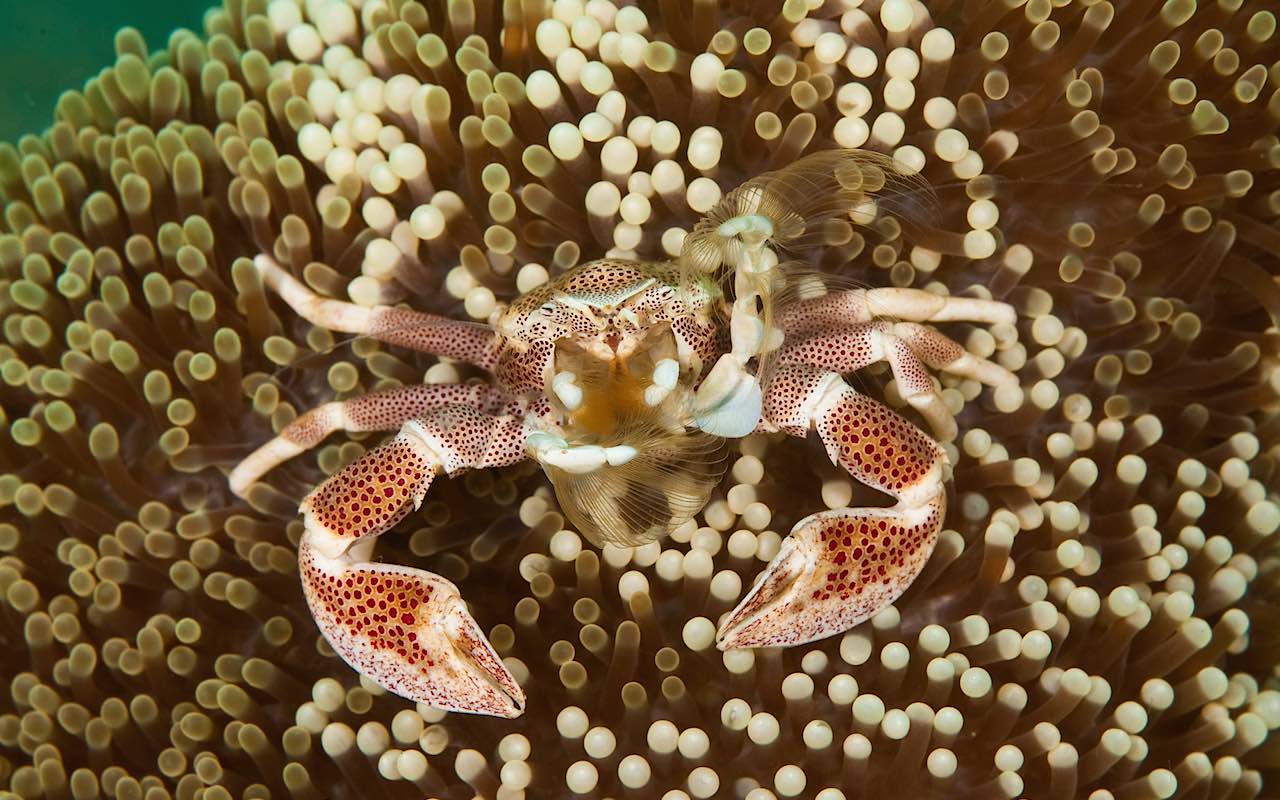 A vividly coloured crab at Tasi Tolu, on the outskirts of Dili.

Dive Timor Lorosae is Timor Leste’s biggest and most popular dive operator, with excellent experienced guides and many years of experience on the island, having established the first PADI dive centre on the island. Live aboards are another option — Compass Dive Charters are an excellent option if you’re looking to dive Atauro. 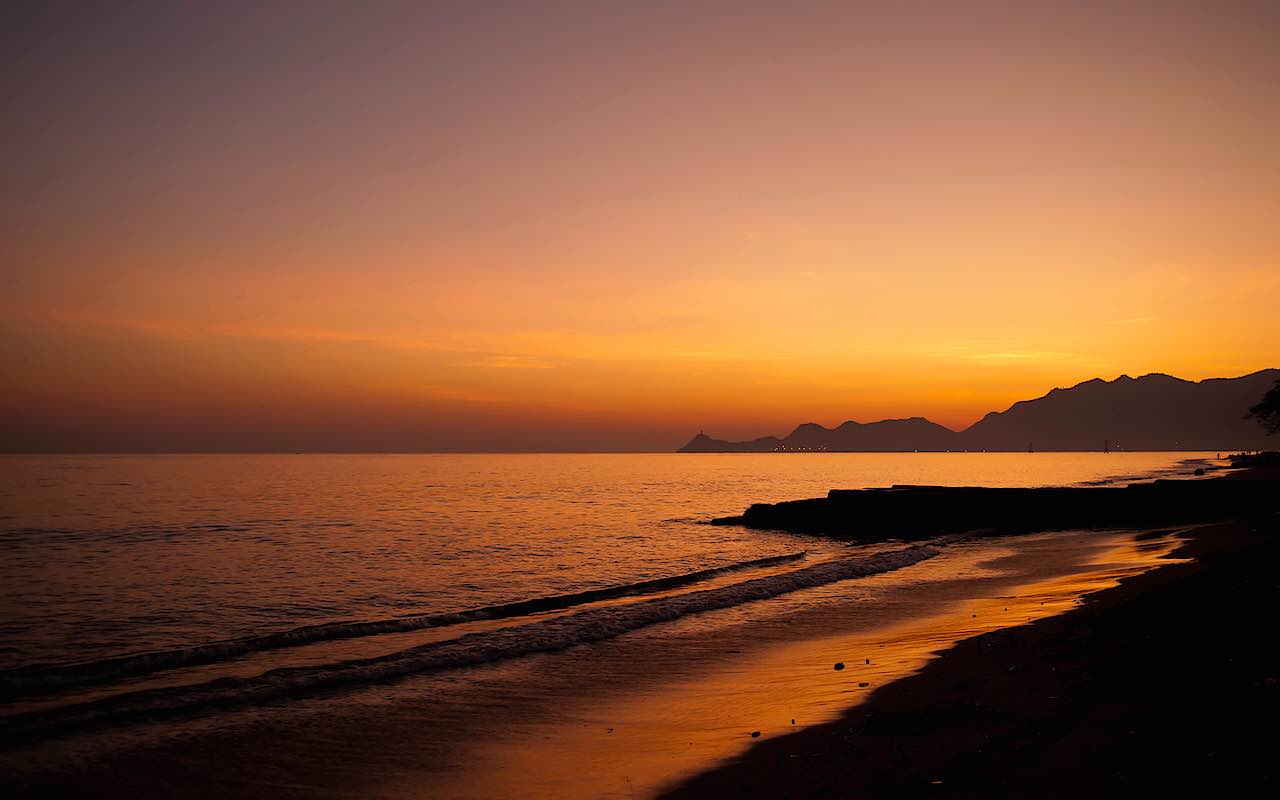 Tagged
Travel East Timor
What did you think of this story?
Meh
Good
Awesome

Atauro Island Has the Most Biodiverse Waters in the World, and Hardly Anyone Knows It Exists

Dispatch From Timor-Leste on the 10th Anniversary of Independence