WHEN I FIRST settled in the northern city of Chiang Mai three years ago, I didn’t expect to see much apart from temples, crowded markets, and carts selling fried bugs in the street. I thought Thailand was all about chillin’ on sunny islands and getting drunk at full-moon parties.

But as of today I can say that I’ve: become good friends with an elephant, kissed under a sky filled with candle-lit lanterns, stared down Buddhist demons, and been soaked to the bone by Thai people celebrating New Year.

Here are 13 experiences you definitely should have in the “Land of Smiles.”

Yi Peng is a festival of light that coincides with Loy Krathong in Thailand and is mainly celebrated in the northern part of the country. The main attraction during this beautiful event is the multitude of flying lanterns that are released into the sky, symbolizing the “letting go” of your worries as the khom loy carry your wishes to the heavens. 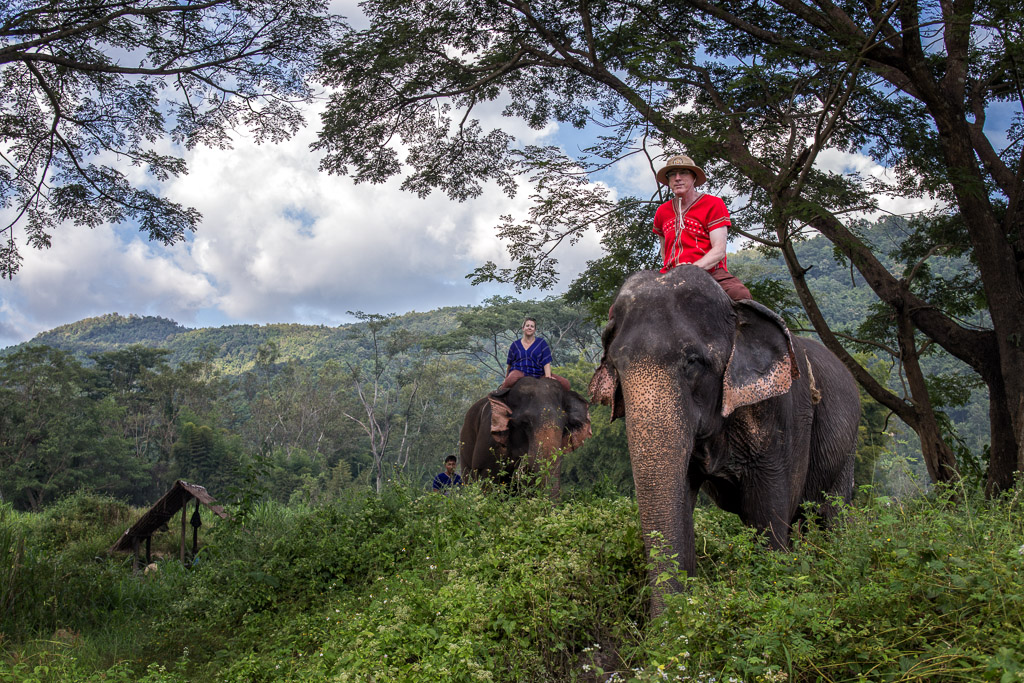 Mahouts are elephant keepers and are usually assigned an elephant at an early age and remain bonded to it their entire life. Some sanctuaries allow you to experience the life of a mahout for a day. Your tasks will include cleaning, feeding, bathing, and riding your elephant through the jungle. Warning: You will want to take your elephant home with you.

3. Launching a homemade rocket at a rocket festival.

Call it an evolution of the rain dance, but this pre-Buddhist ceremony is one of the wildest festivals in northeastern Thailand, with music, dance, and processions that lead into launching homemade bamboo rockets as high as possible into the sky in an attempt to kick-start the rainy season and bring much-needed water to the rice fields.

Not what you’d expect from the name, this infamous event includes ceremonies of firewalking, body piercing, and other acts of self-mutilation undertaken by participants acting as mediums of the gods. Men go into trances and puncture their cheeks with knives, skewers, pipes, even bicycles. Definitely not recommended for the squeamish.

Straight out of the mind of the Thai artist Chalermchai Kositpipat, Wat Rong Khun, also known as the White Temple, is a peculiar structure full of religious symbols. Located in the city of Chiang Rai, its entrance is guarded by menacing demons and monsters and features images of Superman and Neo fighting alongside traditional Buddhist icons (for real).

6. Getting soaked during Songkram. 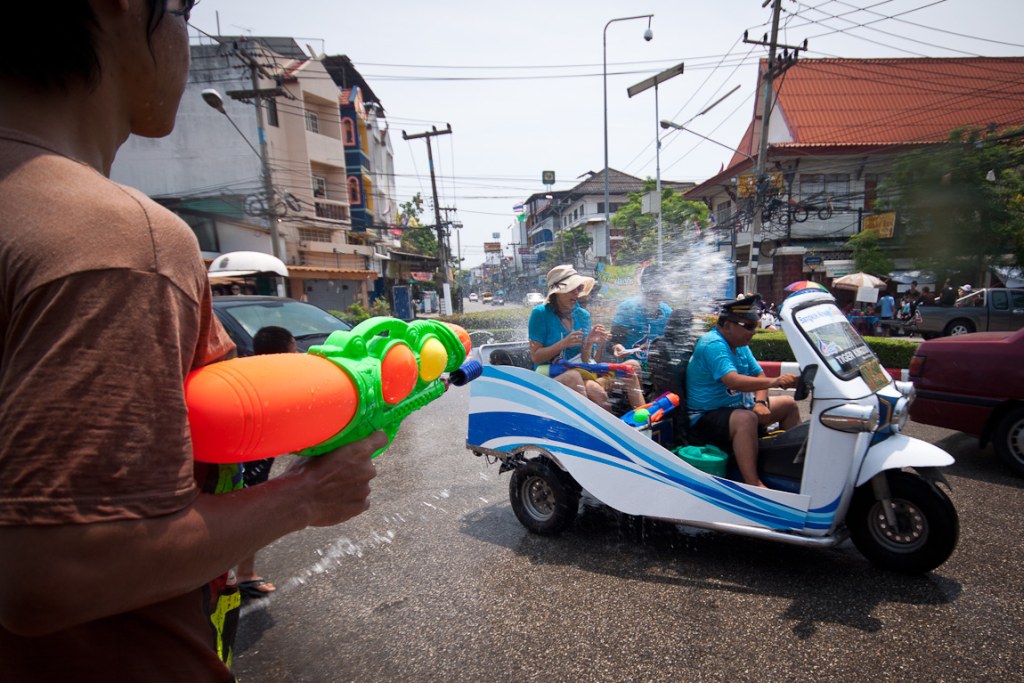 Songkran is the Thai New Year that usually falls in April. It’s also known to be 4 days of non-stop water fight. The throwing of water originated as a way to pay respect to people and wash their “bad fortune” away. It soon evolved into the world’s most massive water fight with the younger generations and the arrival of tourists. Since April is the hottest month in Thailand, it’s also a good way to relieve the heat.

7. Eating body parts made of bread.

If Halloween had an official bakery, Kittiwat Unarrom’s would be it. What appear to be severed human body parts covered in blood are actually loaves of bread. Kittiwat is the son of a baker and has been making such creations since 2006. He explained in 2010 on CNN: “My family is in the bakery business and I learned to bake when I was about 10. I want to speak out about my religious beliefs and dough can say it all. Baking human parts can show the audience how transient bread, and life, is. Also, my bread is still bread no matter how it looks.”

8. Climbing up a “sticky” waterfall.

What makes the Bua Tong waterfall outside of Chiang Mai unique is that the water flows over tiers of porous limestone. The surface of the limestone has an almost sticky feel that creates great traction with skin. As a result, you can easily walk up the waterfall without slipping.

9. Meditating at a beer temple.

In 1984, Buddhist monks started collecting beer bottles to recycle and eventually decided to use them as building material for a new temple: Wat Pa Maha Chedi Kaew. Over 1.5 million bottles of Heineken and Chang beer were arranged in intricate patterns to build the temple over a lake, as well as a crematorium, prayer rooms, hall, water tower, tourist bathrooms, and several small bungalows for the monks.

The tiny island of Koh Hingham might be uninhabited and scarcely visited, but according to Thai mythology, the gods, especially Tarutao, decided to adorn the entire island with precious stones. However, a curse seems to have been placed on the island too, to prevent visitors from removing even the smallest pebble. Each year the National Park office that manages the island receives dozens of stones returned via mail, sent back by people who want to lift the curse.

The 415km (258mi) Burma Railway, known as the “Death Railway,” was built by the Japanese in 1943 to connect Bangkok, Thailand, and Rangoon, Burma. Forced labor was used in its construction. Around 90,000 Asian laborers and over 12,000 Allied POWs died as a direct result of the project from malnutrition, sickness, and exhaustion. 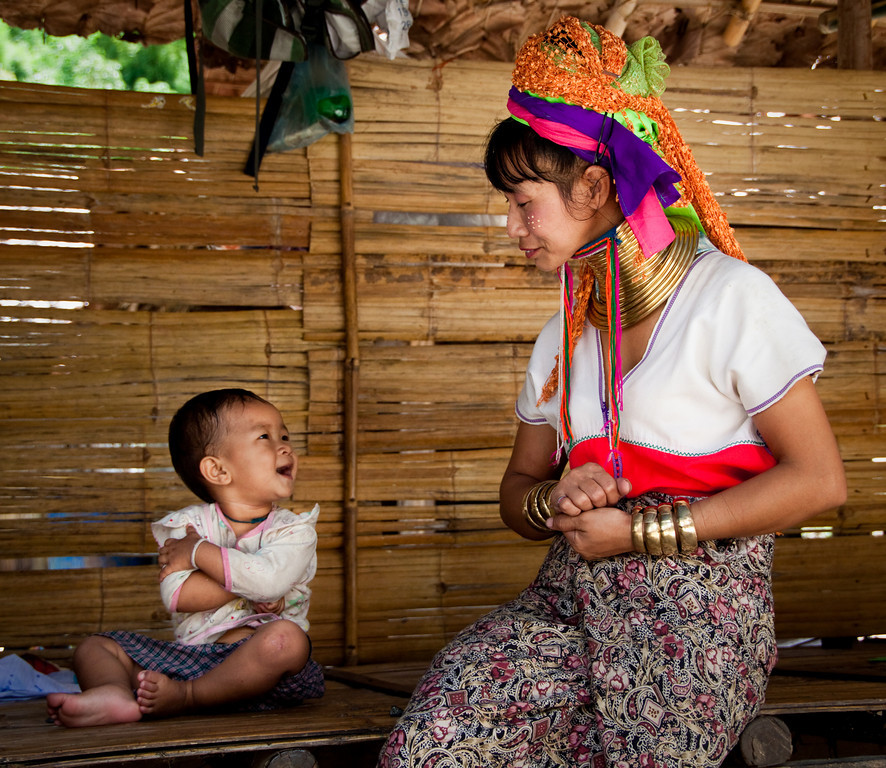 The Kayan Lahwi, also called the “long-necked hill tribe,” are a subgroup of the Karen, originally from Eastern Burma. Many of these tribes have found refuge in Northern Thailand where they live in “tourist villages,” which helps them keep their culture alive. The Kayans are famous for the brass rings that give the illusion that their necks are stretched long. In reality, the rings, which are actually brass coils wrapped around the neck, distort the growth of the collarbones by pressing down on the rib cage.

This post is sponsored by our friends at Intrepid Travel.
Check out their extensive listing of Thailand trips.